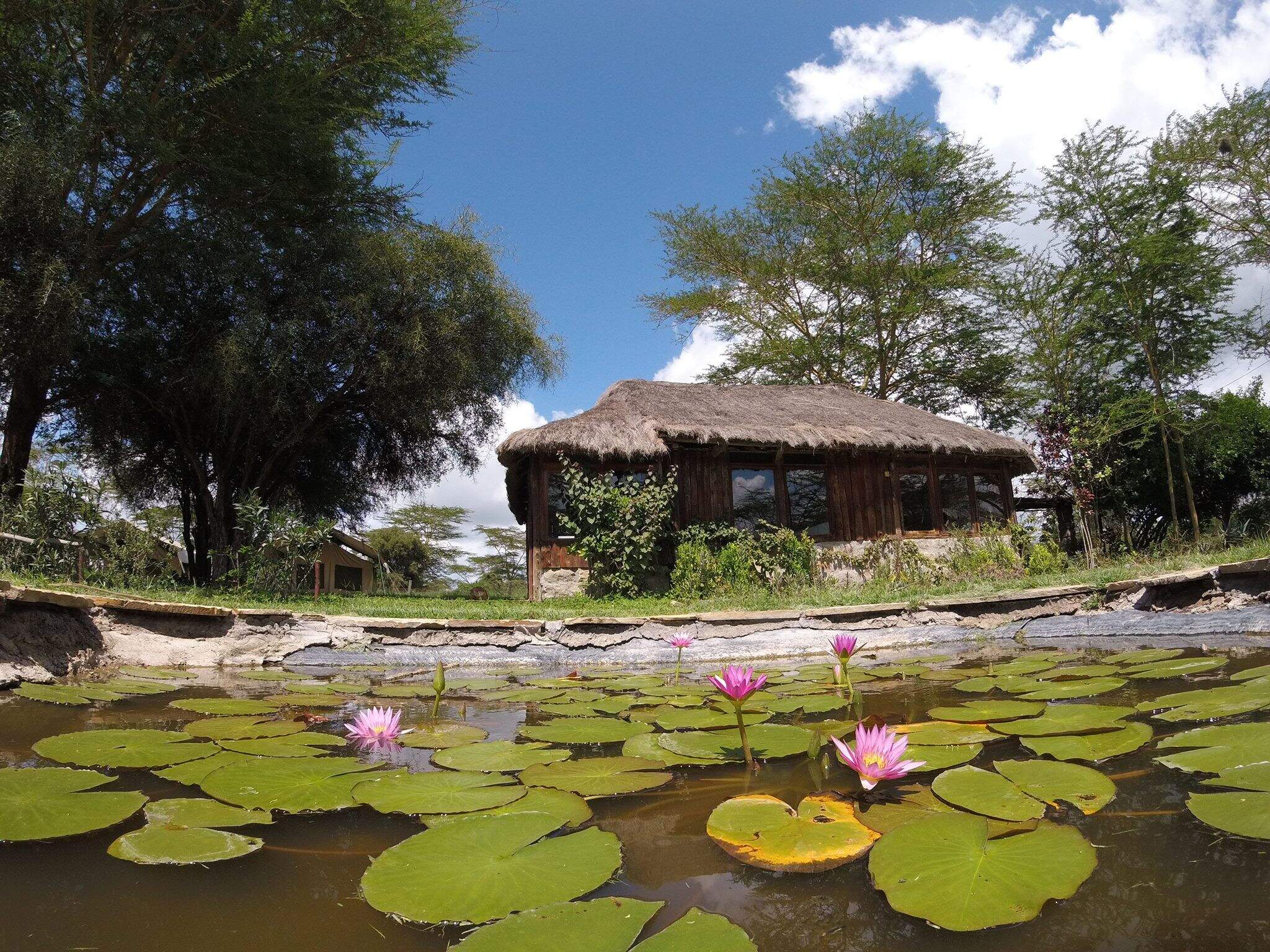 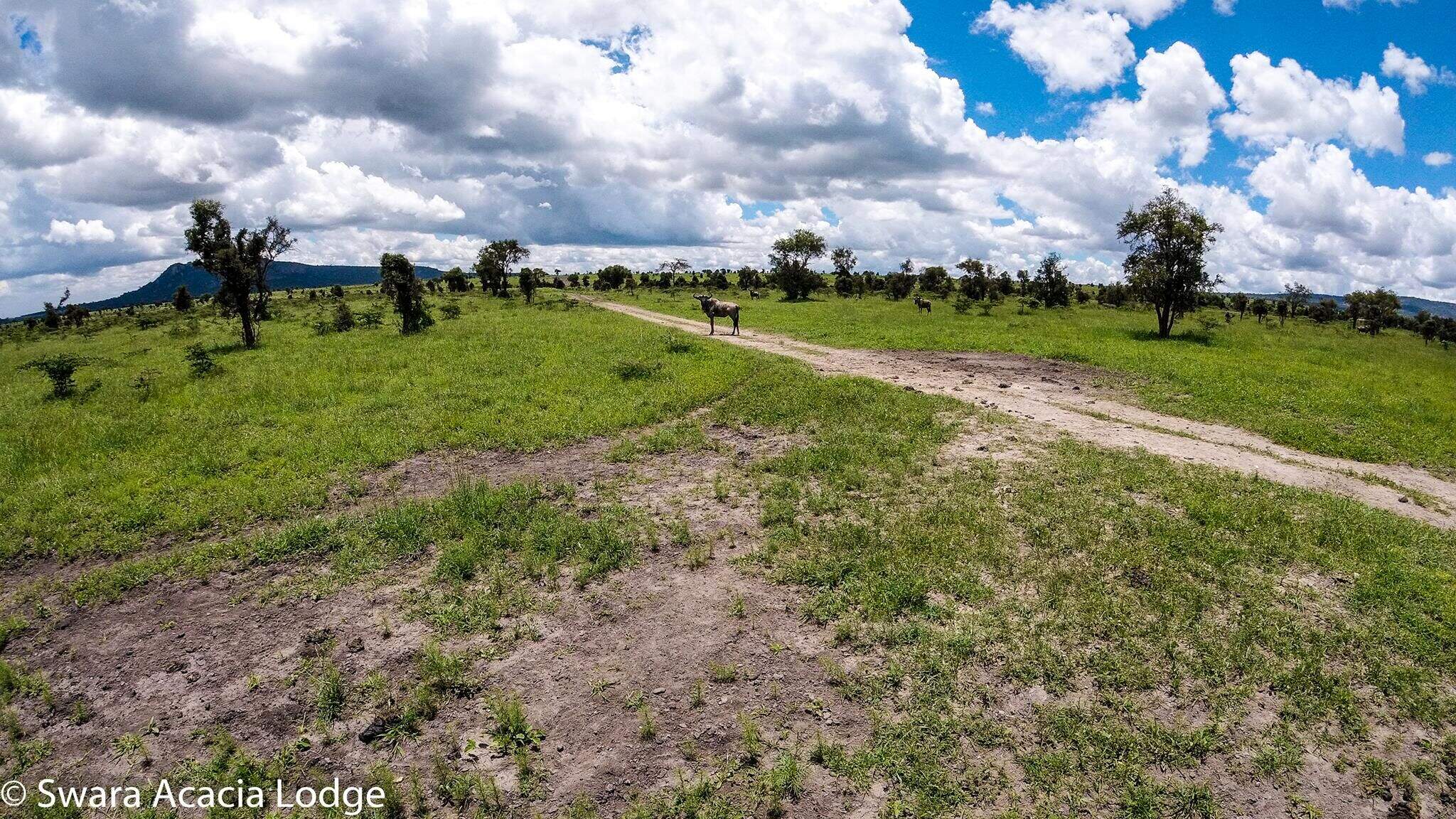 ... Camp Swara Plains, Swara Plains Acacia Camp or Swara Acacia Lodge, lies within the 80km2 Swara Plains Conservancy, 24km from Nairobi International Airport and just 2km from the Mombasa highway. The camp was sold in 2017 and the new owners have since made many improvements, which are not yet reflected in our write-up here. We hope to rectify that soon by re-visiting the camp. Meanwhile, please ask Expert Africa for the latest information.

After the busy and narrow Nairobi–Mombasa highway and the less than encouraging ranch boundary fence, Acacia Camp is a very pleasant surprise with lawns and planted borders, and tables and chairs scattered around. Three friendly dogs usually greet guests on arrival, followed closely by a warm welcome from long-time receptionist and barman Michael Kimani.

The central areas at Acacia Camp consist of a bar, terrace dining room/restaurant (where casual visitors often come for meals at weekends), and a lounge with TV and bookshelves. The whole set up feels like a well-worn family home, but it’s welcoming and the basics such as cold drinks and table service are handled professionally. Giraffe, impala and eland are often to be seen in camp and the lawns – which otherwise have something of the feel of an English country pub garden – swarm with birds.

The 13 en-suite bandas cluster in a crescent around the main lawn, gazebo and pond, close to the dining terrace. They are closely spaced – Acacia Camp is not a honeymooners’ dream in terms of privacy! They are also simple and rustic, but clean, and not completely basic. You just need to be prepared for a bit of debris from the thatched roofs. The reasonably comfy beds have floor-to-ceiling mosquito nets and there are rugs on the floors and small armchairs in the front porch areas. 12 of the bandas have two beds and one, the family unit, has four, and can hold one or two more if required.

The bathrooms are a little bare but adequate enough, with walk-in showers and shower curtains. Toiletries are strictly the essentials – mini-bars of soap in packets. Each banda has its own kuni-booster (a wood-burning water heater), but our hot-water supplies were variable: while banda 3 had great hot water, banda 2 had warmish water only. The water in the bandas is safe to drink or brush teeth in, but a bit salty, so filtered drinking water is supplied to guests.

Acacia Camp was built in 1982 for visiting American field studies students and has kept going as a popular weekend retreat for Nairobians and tourists in the know. Swara Plains Conservancy was transformed from the former Hopcraft Ranch in 2004, when the ranch’s raison d’être was lost after game meat was banned in Kenya. What is surprising is how far out in the bush it can feel, despite being only a few minutes’ drive from the busiest highway in the country. The conservancy (open to casual visitors for Ksh500) is open from dawn to dusk, but is largely empty during the week; most visitors come from Nairobi at weekends, and during school holidays. Within 50km or so of fencing, it sustains a large and viable community of some 3,000 savanna animals which you can see on game drives and walks. Mammals include more than 1,000 wildebeest and around a hundred giraffe, zebra, eland, Thomson’s and Grant’s gazelles, hartebeest, aardvark, oryx, striped as well as spotted hyena, caracal, serval, and even cheetah. There are no elephants, buffalo or lions – so nothing on the ‘very dangerous’ list. They had a good wildebeest calving season in 2012, with hundreds of calves appearing on the plains.

Around the lodge itself, they get bushbabies and tree hyraxes at night, and vervet monkeys during the day. The vervets have become a serious pest, making it impossible to serve lunch buffets.

Some 275 bird species have been recorded at Swara Plains, including nesting martial eagles, European red-billed stork, bee-eaters, ostriches, steppe eagles, and pelicans around the dams.

Whether you choose to sit in a vehicle or do a game walk, Swara Plains’ 100km of tracks are available to explore. Game drives (or night drives with a spotlight) currently cost Ksh3,000/hour (US$35) and game walks Ksh500/hour (US$6). The camp also organises sundowners at a spot where, on a clear day, you can see the peaks of Mount Kenya to the north and the snows of Kilimanjaro to the south.

We’ve driven past Acacia Camp so many times that staying there for the first time in 2012 was a revelation. It’s quite possibly the quickest way to get truly into the bush after arrival in Nairobi and it’s just as easy to get back to the airport from the camp. We enjoyed everything about it – the garden setting, the good food, the simplicity of the cabins just a stone’s throw from the dining terrace and the plentiful evidence of flourishing plains wildlife so close to the city.

Usual board basis
Full Board
Food quality
Manager Rainie Samuels gets high praise for her food. We ate only dinner and breakfast, but we were surprised how good the food was in a camp that is quite basic in many respects.

For dinner we were served a pumpkin soup with homemade rolls, followed by thinly cut steak, well tenderised and fried, with sautéed potatoes, deep-fried aubergines, carrots, string beans and gravy. It was nicely presented, too, with individual side dishes of vegetables and a central dish of steak. Dessert was a homemade apple and sultana pie with vanilla ice cream.

Breakfast was a standard Kenyan presentation of cereals, fruit and toast, and cooked breakfast to order – choice of eggs, bacon, beans, sausage.

We didn’t have lunch, but it normally includes soup, salads, cold pasta and sometimes a quiche, with a pud to follow.

Attitude towards children
Acacia Camp considers itself to be ‘safe and child-friendly’, and there are no age restrictions.
Property’s age restrictions
None
Special activities & services
Housekeeping staff could babysit, but there’s nobody with a professional qualification.
Equipment
Cots and highchairs are available. There are TV and board games in the lounge area for wet days.
Generally recommended for children
Acacia Camp is great for children; it’s not the sort of place where guests will be surprised if children are letting off steam in the garden.
Notes
The Twiga creek – a small stream – flows through camp, but it’s only full for a few days a year in April and October; the rest of the year it’s just a little ditch. Overall, not too much supervision is required.

Disabled access
On Request
Laundry facilities
Full Laundry Service - Extra Charge
Money
There’s a central lock-box. No currency exchange is possible.
Accepted payment on location
Cash payments for extras are preferred in Kenyan shillings, but the lodge could take US dollars, euros or pounds sterling. Credit cards are not accepted.

The Norfolk Hotel is one of the oldest hotels in Nairobi and has a reputation for its colourful history dating back to 1904.

Hogmead is a stylish, luxury boutique hotel/homestay in a secluded part of Langata in south-west Nairobi, very close to Nairobi National Park and the elephant orphanage.