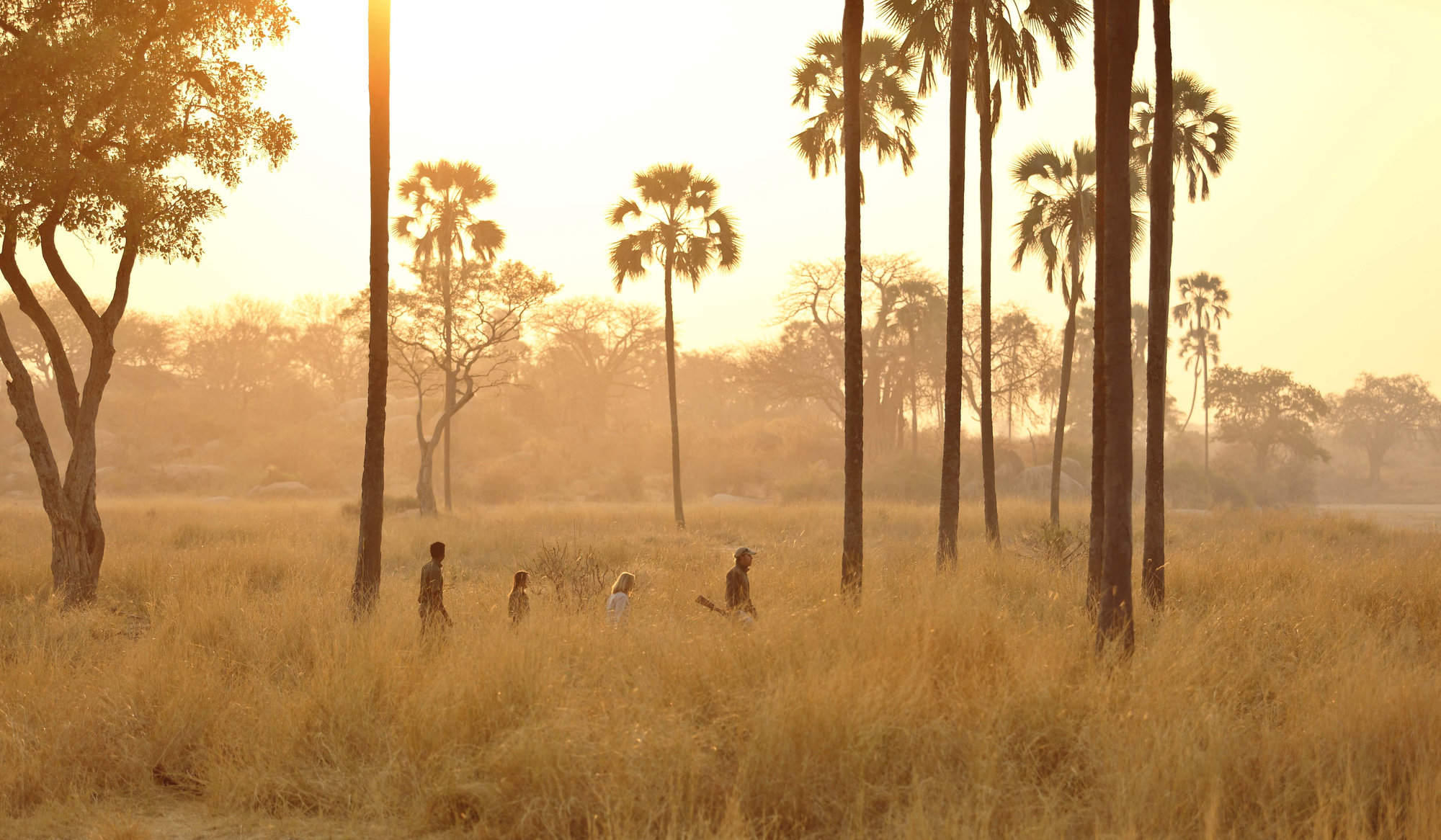 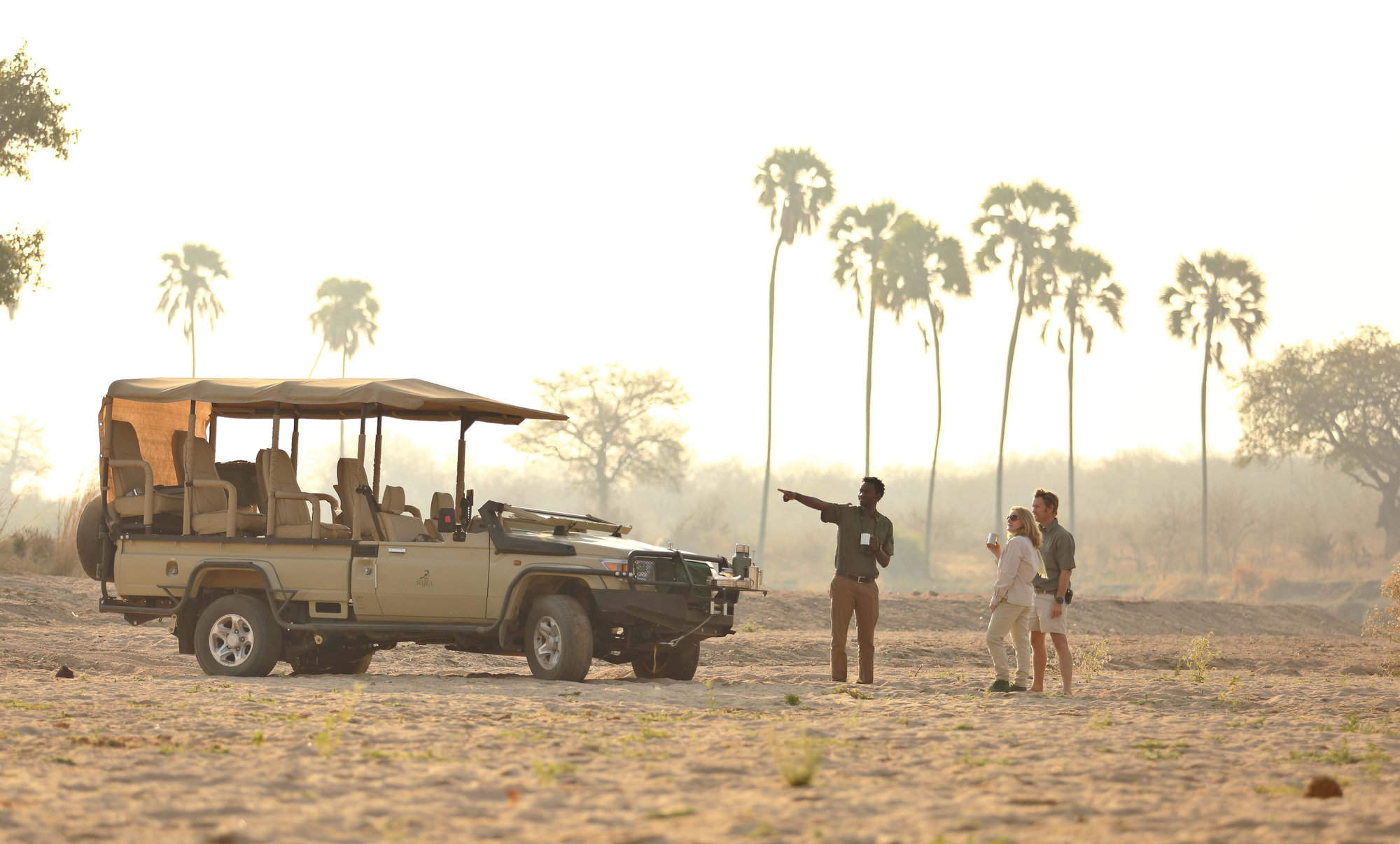 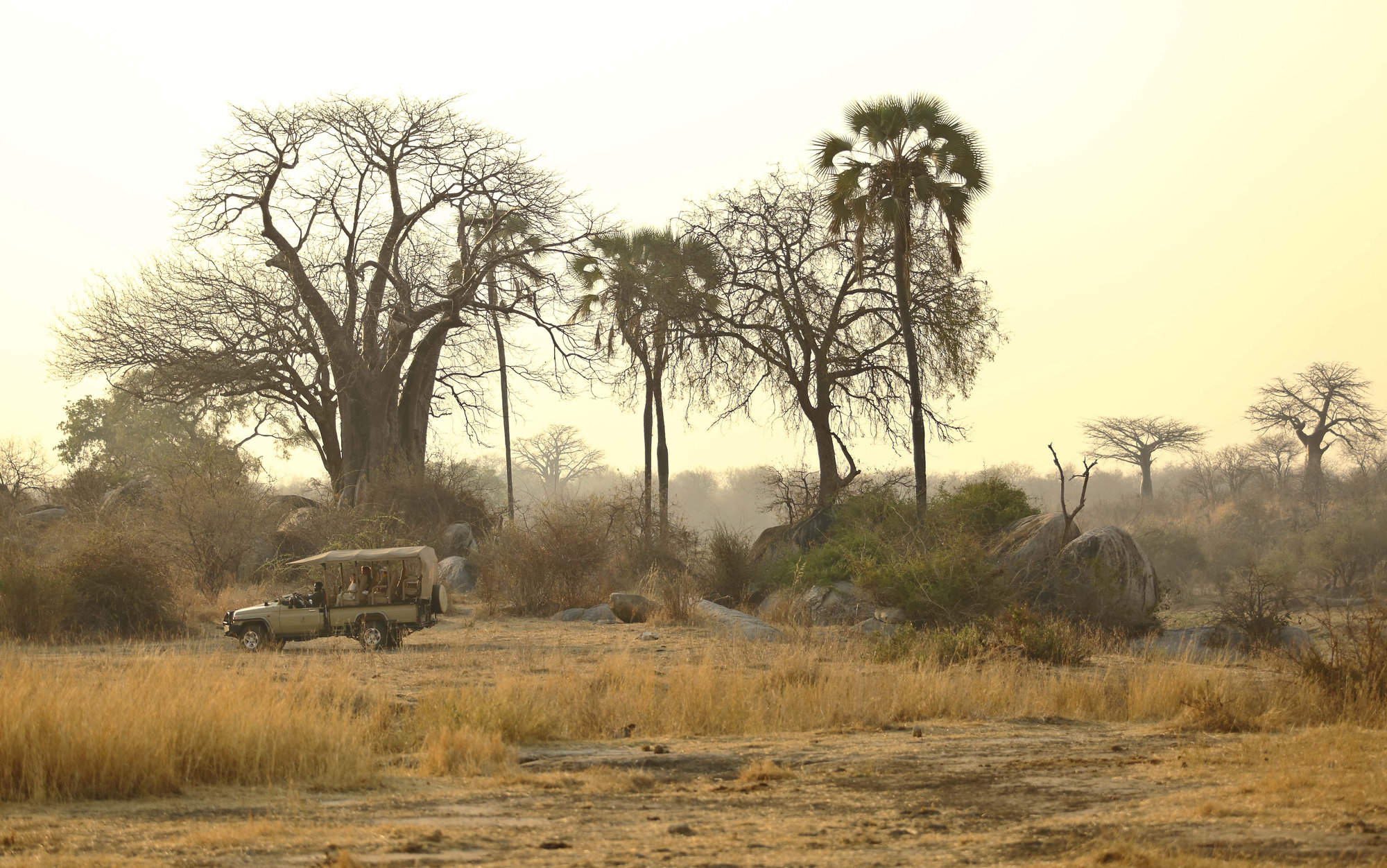 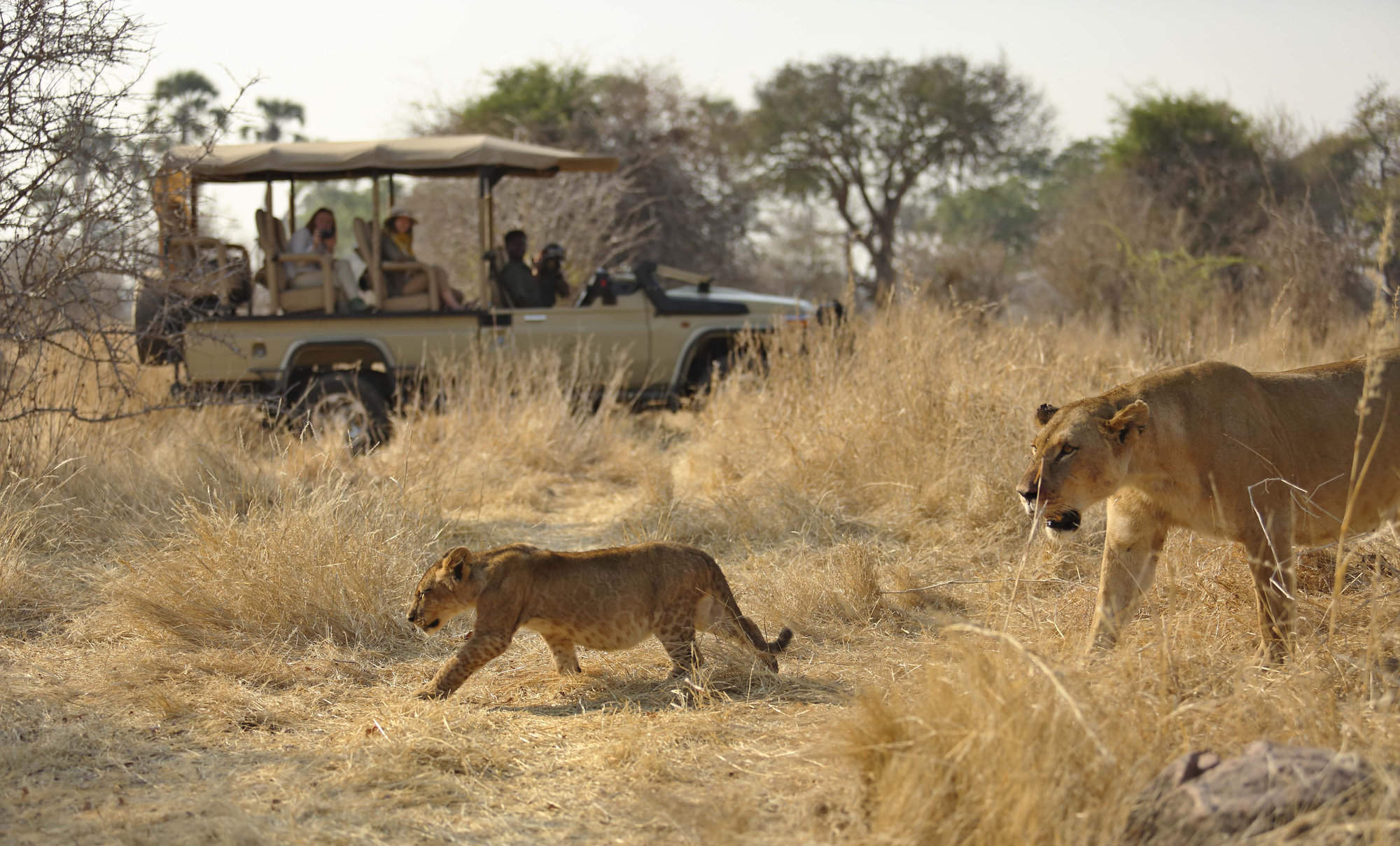 38 independent comments and wildlife information from our travellers who have visited Ikuka Safari Camp and kindly agreed to share their thoughts. They do not necessarily represent the views of Expert Africa

4 nights Arrived 18 Sep 2018
"We flew from the Selous to Ruaha for the second part of our trip and the two areas are very different. Beho Beho in the Selous has it's own airstrip so the drive to it was only a few minutes, however as Ikuka sits atop an escarpment overlooking the Mwagusi plain its about an hours drive from the main airstrip at Msembe. However the views from the rooms and the main camp are truly stunning once you have arrived.

The camp is amazing, this was only the second season so everything has a very new feel to it. The camp manager, Mark, who is also the owner, was very friendly and attentive as was Tanya the manager. They both went out of their way to ensure that our trip was as pleasant and comfortable as possible. All the staff were very attentive and helpful which my wife greatly appreciated, due to her limited mobility having recently broken and dislocated her ankle. A special mention to Seif, Luka, Davis and Salum who looked after my wife on the occasions when she could not go on the afternoon game drives.

The rooms have enormous beds about the size of two doubles together and they have the comfiest bedding. Although you are under canvas it is definitely not camping. The hot water is provided by a gas powered boiler. The food is excellent, the staff ensuring that any dietary requirements were met. Breakfast in the bush was also very good considering it is all pre-packed before leaving at shortly after 06:00!

Festo was our guide and he was without a doubt one of the best guides we have ever encountered. He had a great sense of humour, full of stories and anecdotes as well as being able to provide some great game viewing. The male and female lions plus three cubs on the last night was the piece de resistance, especially as the interaction with a herd of elephants trying to get to the river generated an impasse which thankfully resolved itself without incident!

4 nights Arrived 14 Sep 2018
"Ikuka is situated on an escarpment with outstanding views. The food was great, the interaction with other guests was wonderful and the management run a first class operation. We saw a wide variety of game and the guide was very good at ensuring nothing was missed. Everything was excellent!" See all these reviews: 7n in Tanzania; 4n in Zanzibar
Experience Report
Overall Rating:
Excellent
Location:
Excellent
Service:
Excellent
Activities:
Excellent
Rooms:
Excellent
Food:
Excellent
Facilities:
Excellent
Sightings Report

4 nights Arrived 14 Sep 2018
"We had an amazing time at Ikuka and I'm hard pushed to think of any negatives.

If I was being picky the only slight negatives were no hairdryer, a separate w/c or at least a screen hiding the toilet from the main bathroom would be preferable ." See all these reviews: 9n in Tanzania
Experience Report
Overall Rating:
Excellent
Location:
Excellent
Service:
Excellent
Activities:
Excellent
Rooms:
Good
Food:
Excellent
Facilities:
Excellent
Sightings Report

5 nights Arrived 22 Aug 2018
"Beautiful location high on a hill overlooking the park in all directions. Rooms were superb, food excellent and staff well trained and very attentive. We had an excellent guide, Reuben, who looked after us every day.

The drives were very good, centred mainly on the closest river, albeit mainly dry, where there was quite a diversity of animals. We did venture further afield, again with reasonably good results .

Worth mentioning to clients that, due to altitude, the early mornings are cold and the blankets they supply just about kept the cold out, but a jersey would be useful. Mealtimes excellent with communal eating for all meals at which the management staff joined us too." See all these reviews: 13n in Tanzania
Experience Report
Overall Rating:
Excellent
Location:
Excellent
Service:
Excellent
Activities:
Excellent
Rooms:
Excellent
Food:
Excellent
Facilities:
Excellent
Sightings Report

4 nights Arrived 3 Aug 2018
"Ikuka is relatively isolated and therefore there are few other lodges/jeeps around. On some days we saw only one or two other vehicles. This is a definite plus. There is an abundance of elephants, giraffes and buffalo.

Our guide was of the old school and not too interactive, but he knows his animals. There are standard 'circuits' for driving around the park and sometimes it feels more like driving on regular roads than tracks, at laest compared to the Serengeti.

"The most fabulous location in the Ruaha"

3 nights Arrived 14 Jul 2018
"The scenery in the Ruaha is stunning, even without the animals, with the most fantastic sunrises and sunsets.We did expect to see more animals though from the information that we had read. A couple of times we drove for 2 hours before spotting anything.

We chose Ikuka for its location on top of the hill for stunning views and we were not disapointed. The stars were amazing here. Again your advice on rooms was spot on, we were allocated the two that we had requested and had the pleasant surprise in ours of a plunge pool. They were beautiful.

The service was very good in a relaxed and informal manner. It was nice to get into the Land Cruiser in the mornings with a hot water bottle and blanket waiting for us.

The food was outstanding, from our bush breakfasts to dinner. The quality was as good as any top London restaurant.

Special thanks must go to Habido (our guide) for his 12 hour stint in trying to find us a Leopard! Again, it was great to be allocated our own guide for the duration of our stay." See all these reviews: 10n in Tanzania
Experience Report
Overall Rating:
Excellent
Location:
Excellent
Service:
Excellent
Activities:
Excellent
Rooms:
Excellent
Food:
Excellent
Facilities:
Excellent
Sightings Report

4 nights Arrived 10 Jun 2018
"Very Richard Branson style lodge! Firstly Ruaha was such a great choice for us. As there is only a few lodges the park was relatively quiet and you rarely came across other vehicles!

The Lodge is amazing, the rooms have the biggest beds I have ever seen literally the size of two doubles together and the have the comfiest bedding! the views from those beds are beautiful! Although you are under canvas it is definitely not camping! Mark and Tanya and everyone that works there are so lovely you really do feel like you are visiting your family. The food is amazing, breakfast out in the park was surprisingly good considering it is all packed up for you, the lunch and dinner served in the lodge were some of the best food we have eaten and it was totally unexpected out there overlooking the whole park!

Habibo was our guide and he is Ruaha's answer to David Attenborough, all the guides seem to know him and every drive would be completely different. It seemed he could find whatever we wanted to see! We saw all the animals we came to see! Elephants, Giraffe, Lions and cubs! Leopard, Cheetah, Hippo and so many others, he knew every single bird we pointed out and really made our stay! We couldn't have asked for more.

The little touches at the lodge really made the stay, everyone is so attentive, from having your little water bottle with your name on waiting after the long plane journey to having a hot water bottle in the morning drive! All my ridiculous food allergies were sorted with no fuss at all! The lodge itself is so relaxing, I would go back just to relax by the pool looking at the view!

The staff were so friendly and wonderful to share the experience with.

4 nights Arrived 12 Feb 2018
"Ikuka was a very well run camp and it was evident that everyone worked as a team, not only to provide guests with a great experience, but because they were colleagues and helped each other out.

The rooms are very comfortable, the food was good and plentiful - in fact, their bush breakfasts were the best I think we have ever had. It wasn't the usual cold fried egg sandwich - it was much more imaginative and changed every day.

In some respects this was a more formal camp in that the staff, including the manager on duty (for us Tanya) was always there to wave you off and greet you back from safari and the staff serving food and drinks were extremely attentive. When we were staying there were some guests who wanted to go for shorter drives and, even though they hadn't booked a private vehicle, every effort was made to accommodate them.

Meal times provided a good opportunity to hear about everyone's day and enjoy each other's company, although it was possible for you to dine privately in your own little group if you wished.

We had some eventful game drives and some quiet ones but were privileged to see roan antelope.

All in all, a luxurious camp, good attention to detail in the rooms, great food and staff eager to ensure you have a good time." See all these reviews: 18n in Tanzania
Experience Report
Overall Rating:
Excellent
Location:
Excellent
Service:
Excellent
Activities:
Good
Rooms:
Excellent
Food:
Excellent
Facilities:
Excellent
Showing 21-30 of 38
1234
Previous Next
97%
38 reviews of Ikuka Safari Camp by travellers since August 2007
Overall rating by our travellers
33
5
0
0
0
Filter by month

In a remote corner of Ruaha, Kichaka is a private mobile camp focusing on superbly guided walking safaris.

One of Ruaha's most luxurious camps, Jabali Ridge nestles among kopjes and baobabs, with beautiful views of the surrounding area.