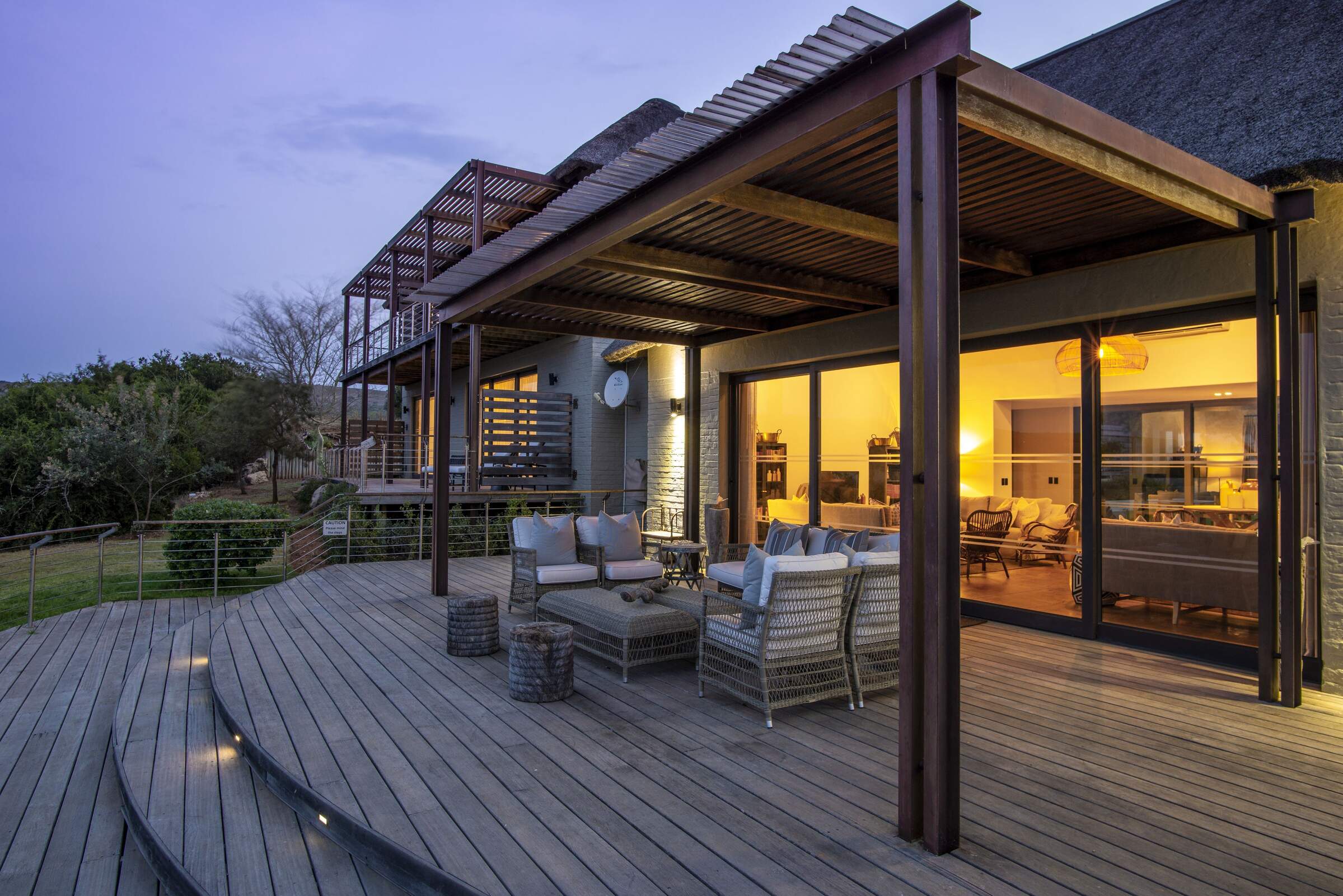 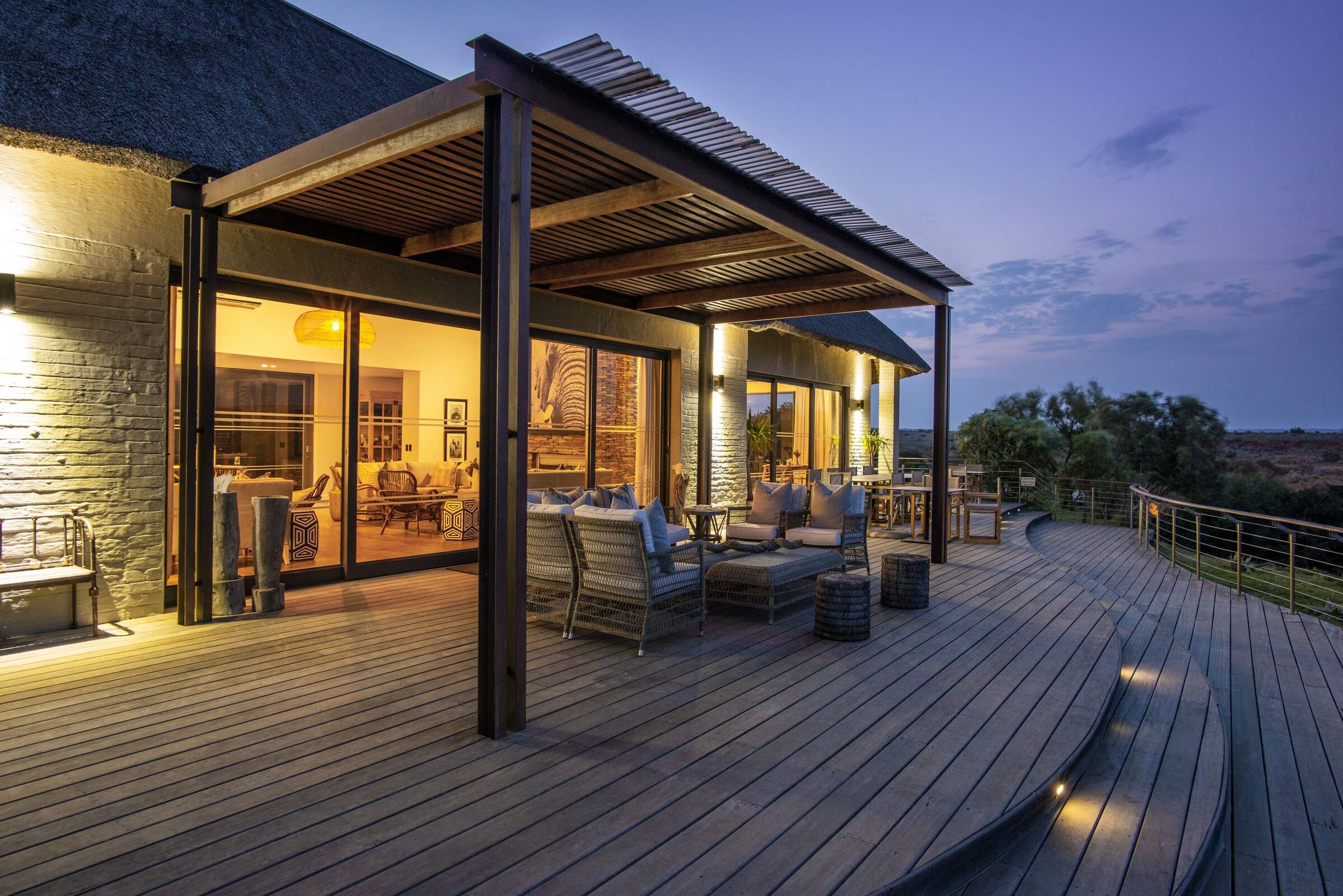 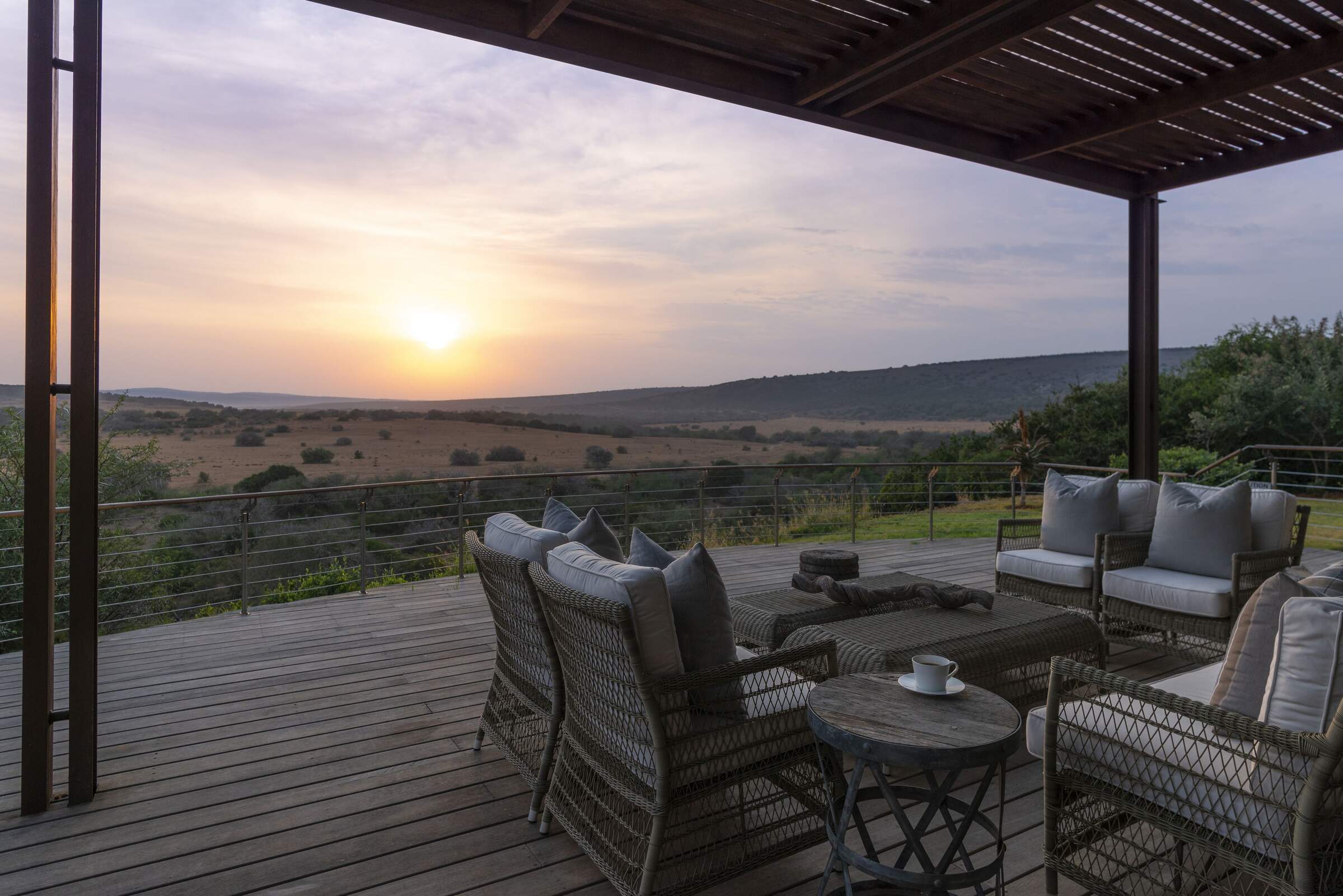 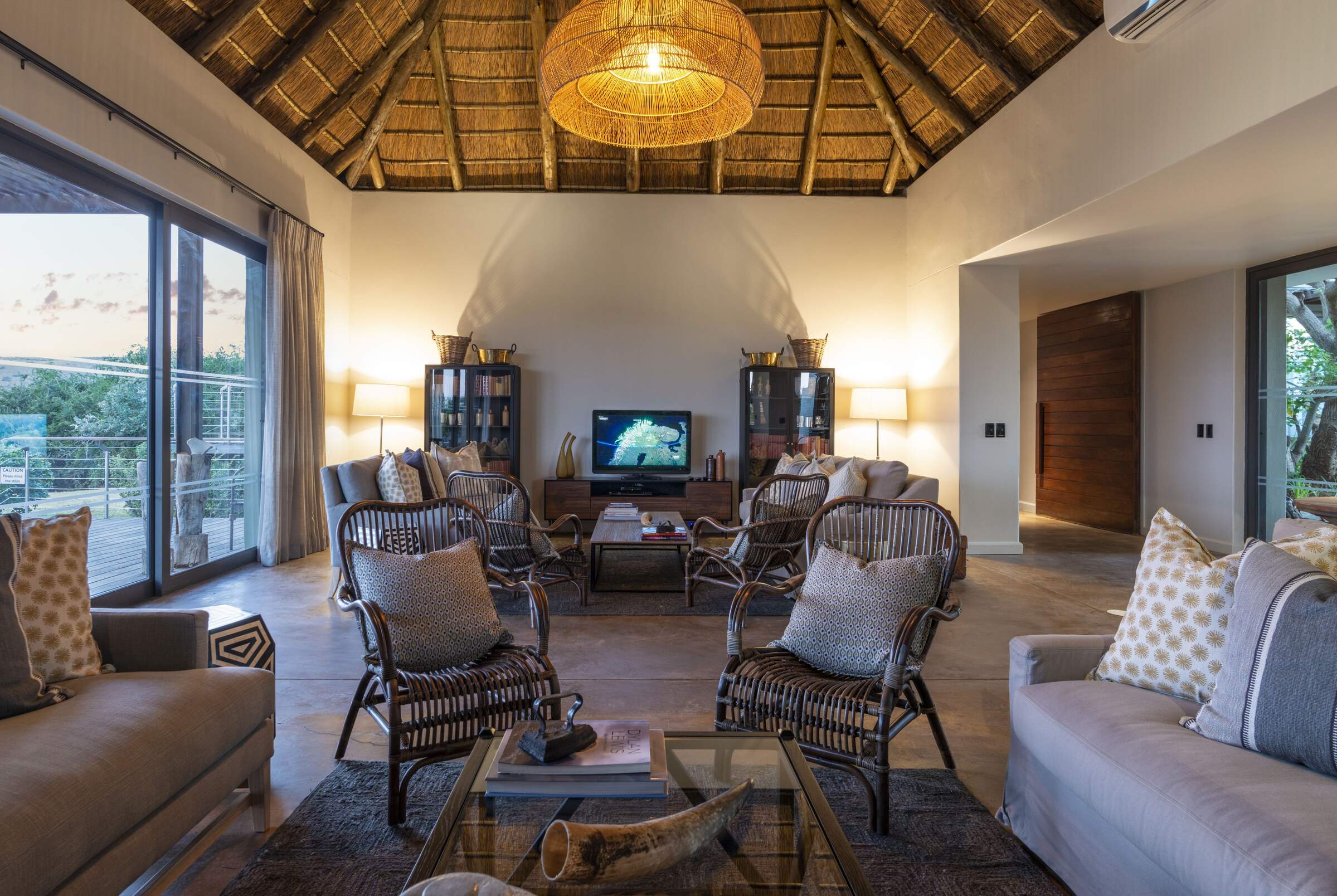 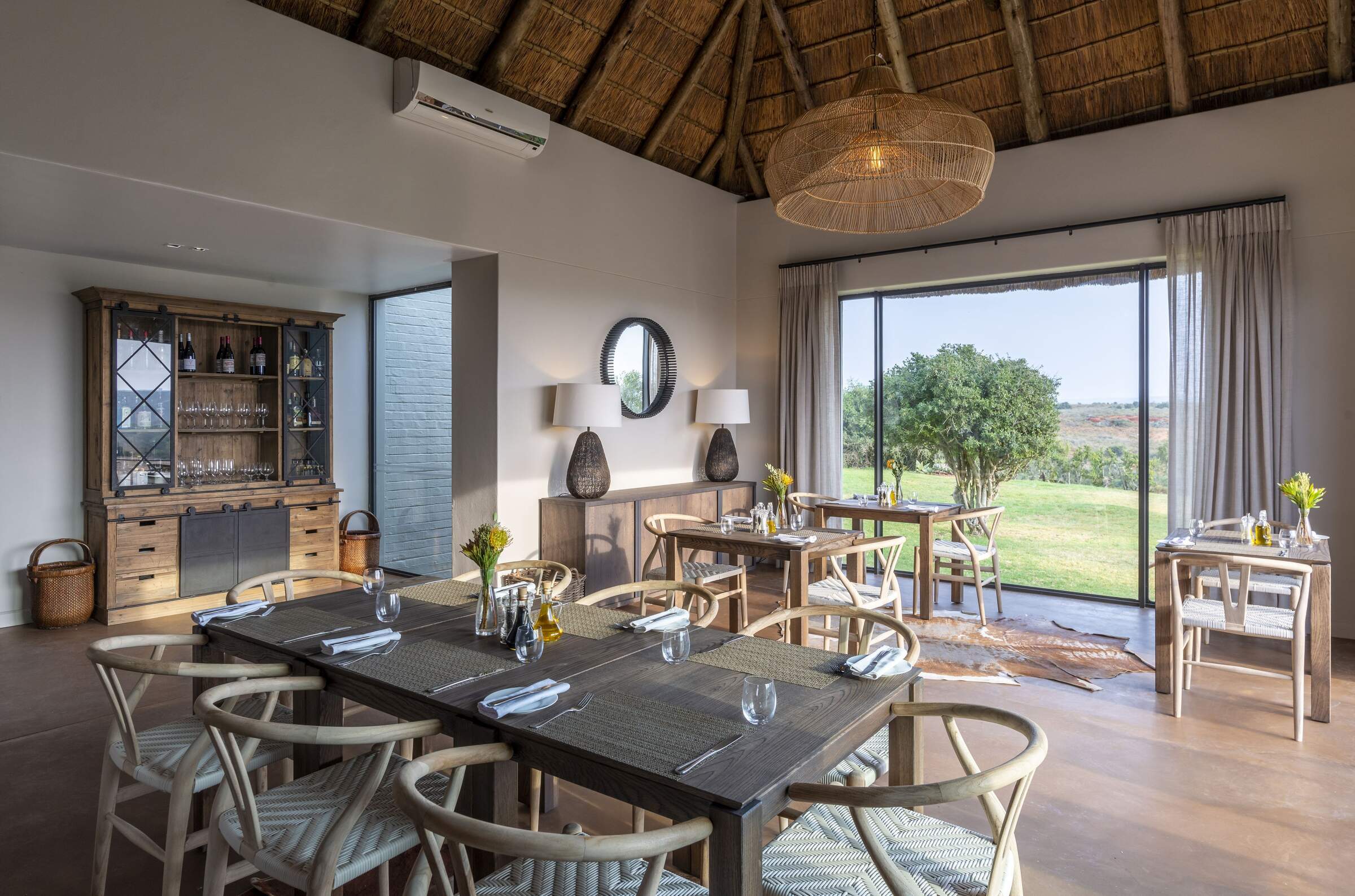 Sarili Lodge is located in the bush above the Bushmans River in South Africa’s Shamwari Private Game Reserve.

The reserve around it is not too wild, but is regarded non-malarial and hence Sarili puts a lot of emphasis on child-friendliness.

The lodge takes its name from Sarili ka Hintsa, who lived from about 1810-1892 and was the paramount chief of Xhosa people for over 50 years – during which his armies fought a number of frontier wars.

Although nobody from the Expert Africa team has yet stayed at Sarili Lodge, several of us have visited the lodge whilst staying in other lodges on the Shamwari Reserve, and these comments are based on those visits.

Sarili Lodge has just four ‘luxury rooms’ and one suite, each sleeping a maximum of two travellers.

Each of the four ’luxury rooms’ at Sarili is subdivided into three sections: the sleeping area with a double or twin bed, a dressing area with an extensive wardrobe behind, and, through open-plan doors, the bathroom. This contains a nice bath surrounded by granite, a large walk-in shower, a washbasin and a toilet in a separate little room.

All the ‘luxury rooms’ at Sarili Lodge are air-conditioned and fitted with under floor heating, which is very agreeable during South Africa’s chilly winter days. Each room has a private minibar, tea and coffee making facilities, an international dial telephone, an electronic safe and a remote control TV. Sarili’s rooms are designed in hues of brown and beige, which, together with the warm lighting from the high-thatched ceilings, makes the atmosphere feel very comfortable, although a bit like in a hotel rather than a safari lodge.

Two of these ‘luxury rooms’ are upstairs, and each of these has a balcony with lovely views over the Bushmans River and the plain beyond. The other two ‘luxury rooms’ are inter-leading and situated on the ground floor, and each has a private patio facing the central courtyard. The design of these is slightly different, but they effectively have the same facilities.

In the suite at Sarili Lodge, whose balcony also overlooks the Bushmans River, both bedroom and bathroom are much larger than in the ‘luxury rooms’. In addition, the suite’s bathroom has two washbasins, a rather clever glass screen around the bath, which stands on a strip of dark tiles behind a wooden wall, and a separate cabin with the toilet. The bedroom here comes with a double bed, a sitting area, a writing desk and a big flat screen TV. A large shelf, which is built around a dressing table, offers lots of storage space and contains a little safe.

Sarili Lodge’s suite can additionally take a cot and an extra ¾ bed to accommodate a family of up to two adults and two relatively small children.

There are a handful of different sitting areas at Sarili Lodge. The main lounge hosts two sitting areas on polished concrete floors with some nice large sisal mats. While one sitting area offers a flat-screen TV and a few books for entertainment, the second is set around a fireplace. A central chimney breast built of slate light rock goes up to the thatched ceiling here.

On the other side of the fireplace is a big, high-thatched dining room, which in fact feels more like a homely cottage kitchen.

The swimming pool at Sarili Lodge is heated and filled with salt water instead of chlorine water. It has got a small shallow area for children with some steps down onto the main area, at a depth of 1.5 metres.

Sarili Lodge is a relatively child-friendly lodge and makes a good base for an introductory safari in an area that’s not too wild. The outside decks here make the most of the lodge’s lovely location and give a good sense of being in the bush. On our most recent visit in May 2013 the concrete floors and clean lines of the lodge’s contemporary design appealed much more to us than its sister-lodge, Riverdene. As of 2020, Sarili is an exclusive use lodge, so if you're after a private experience for your family or a group of friends this could be a lovely option.

Location
Shamwari Game Reserve, South Africa
Ideal length of stay
Three nights at Shamwari’s Sarili Lodge would give you a good introductory wildlife safari experience.
Directions
Travel on the N2. Turn north onto the gravelled R345 after 65km if coming from Port Elizabeth (otherwise after 58km from Grahamstown). After 7km follow the signs to Shamwari to the right.

Family holidays
Sarili Lodge is a good base for family safari holidays in South Africa, in the not too wild and non-malarial Shamwari Reserve. Even under-fours can go on shorter game drives relatively close to the lodge to see hazard-free wildlife, and every child receives a gift-pack.
See ideas for Family holidays

Attitude towards children
We’re told that Sarili is very accommodating towards families with children and as it is booked on an ‘exclusive use’ basis this is ideal for a relaxing family stay. It even occasionally refers to itself as ‘Sarili Family Lodge’.
Property’s age restrictions
None
Special activities & services
The manager at Sarili Lodge is said to discuss options for children’s activities with families when they arrive.


In contrast to many other lodges where small children have no chance to participate in game drives, Sarili can conduct 4WD wildlife safaris specifically for children under the age of four. On these, children will be taken out to see hazard-free wildlife like zebras, giraffes, monkeys and antelope but no dangerous game. These safaris are shorter and closer to the lodge than the normal ones and usually take place after the morning drive for adults and over-fours.


Because there is no dedicated children’s coordinator at Sarili Lodge, it’s essential to book child-minders prior to arrival. Please note that “one-on-one" child minding is charged at an additional cost and might be provided simply by the lodge’s staff rather than qualified child-minders.
Generally recommended for children
Sarili Lodge does work for families with children. It is relatively unusual for a lodge to offer game drives for very young children – so this might be a good chance for under-fours to get a taste of African wildlife.

Notes
Since Shamwari Reserve is home to many predators and other dangerous animal species, we advise guests to constantly supervise their children.

Communications
WiFi internet access is available throughout the lodge.
TV & radio
There is a satellite TV in the lounge and a flat screen in each of Sarili Lodge’s rooms.

Disabled access
Money
An electronic safe can be found in every room at Sarili Lodge.

Other lodges in Shamwari Game Reserve