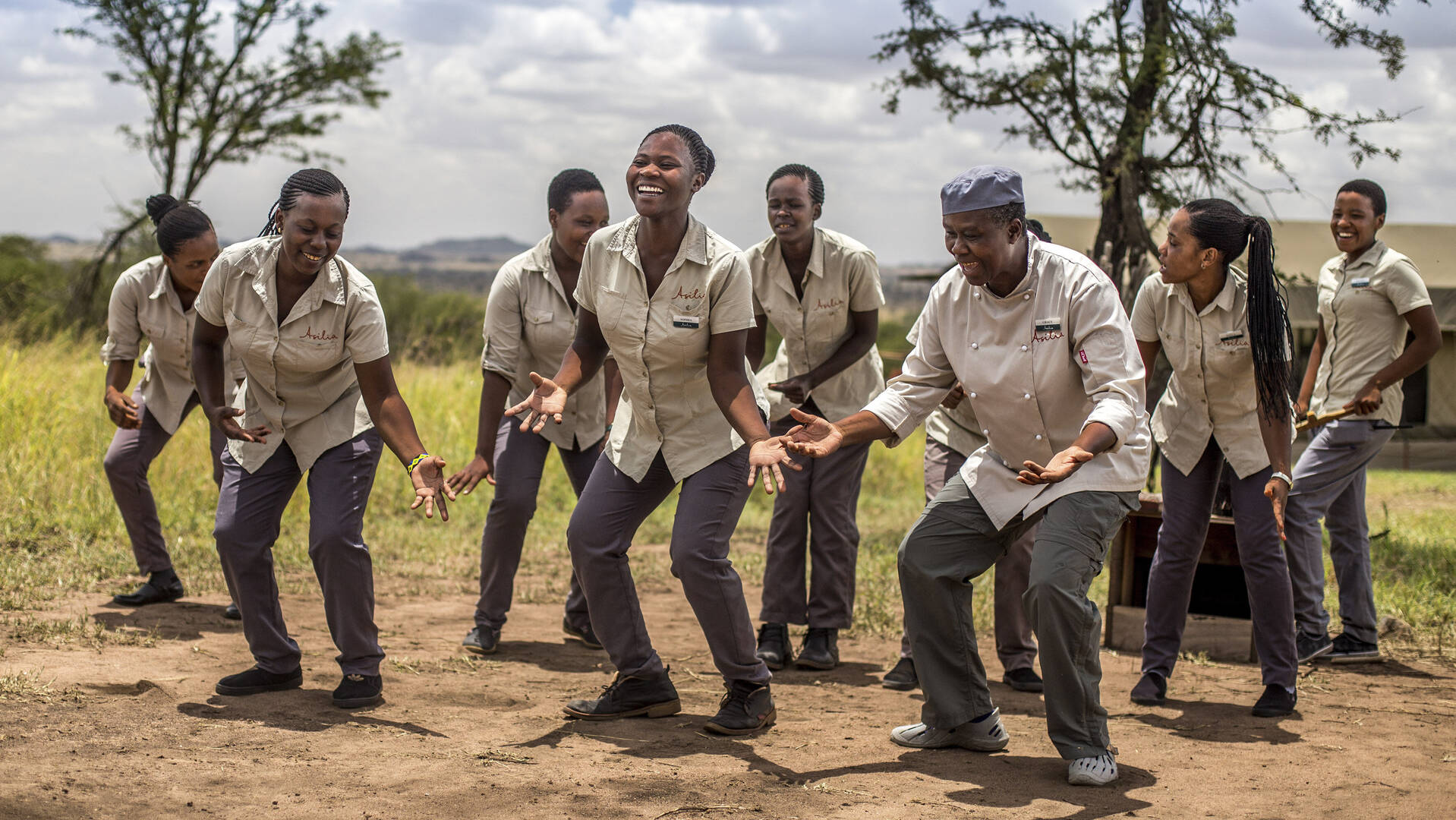 ‘How, who and how much should we tip on safari in Tanzania?’ That’s a common question from travellers, so we’ve put together the following guidelines. Along with the general etiquette of tipping in Tanzania, we’ve highlighted the various points to consider, which we hope will help you to avoid awkward situations.

Tipping in Tanzania should always depend on the quality of service received, and it is your choice whether or not to tip. Of course we encourage our travellers to appreciate good service, but we also try to make them aware of the impact of tipping on the local community.

For those working in the service industry in Tanzania, including waiters, guides and trackers, tips can form a significant part of their income. However, there is a fine balance between tipping enough, and tipping too much. You may not think that tipping too much could cause problems, but excessive tips can throw out the balance of the local economy.

To understand this better, consider the work of a senior park ranger. To achieve this status requires a high level of education and knowledge, as well as several years’ experience in different national parks. If done properly, this is a very important role, and a fair wage is paid for the job, but government-employed rangers aren’t usually top earners. Yet both the parks and their visitors benefit if educated and competent people are appointed to this kind of post.

Conversely, a safari camp assistant, who helps out generally and perhaps carries bags for guests, is also very necessary. Yet s/he doesn’t need to be so educated, or to have as much experience as a ranger, and s/he certainly won’t have the same level of responsibility or the same salary. So consider the effect if such a worker gets massive tips – totalling, say, US$500 a month. If that happens, there’s a very real possibility that s/he will end up earning more than the park’s ranger.

In this case, the local balance of responsibility and remuneration is distorted by the tips – which are too high. If this happened too often, it would remove the incentive for a ranger to work harder and take on more responsibility – and could well see park rangers giving up their jobs to become camp assistants, to the detriment of the park and its visitors.

So before you tip, do try to bear in mind the importance and extent of the work someone is doing for you, and remember to keep your tips proportionate.

Who to tip and when on a Tanzania safari

It’s important to know who would appreciate a tip on a safari, as there are many people working to make your travel a success. Consider:

An exciting and successful safari depends mainly on your guide. For this reason, many lodges suggest tipping him/her separately, to ensure that they get a fair tip.

A lot of people work behind the scenes to ensure that your trip is a success, including the chefs, the kitchen team, the maids and the housekeeping staff. To include all of these ‘back of house’ people, many camps have a ‘general staff tip box’, with the proceeds divided equally between the staff.

Some travellers ask if they should tip the camps managers. They are important, of course, but would you tip the owner of a restaurant? Generally, we don’t think so, and similarly, we wouldn’t usually recommend that you tip the manager. That said, there are exceptions to this rule, perhaps if you want to appreciate outstanding or extraordinary service.

To summarise, normally in Tanzania you tip your guide separately, as you’ll spend most of the time with him or her, and the rest of the staff together. It is unusual to tip the camp manager.

Another frequently asked question is the best time to give tips. There are three options:

Best practice is always to tip just once, and always at the end of your stay at each safari lodge or camp.

Your guides won’t expect you to tip after each activity, and doing so could put pressure on them to ‘perform’ for the guest who is tipping – while probably distorting the relationship between him/her and the guests as a whole. It would certainly put your fellow guests in a very difficult position if you were offering tips this frequently, and they were not.

The most common way how to tip in Tanzania is to use the ‘tip box’ that most camps offer. However, sometimes the box will be for all the staff, and sometimes for the staff excluding the guides; each camp has its own policy.
Some camps explain their policy in writing and leave it in their rooms. If not, ask the manager if there’s a tip box and, if so, who shares the proceeds. Then it’s up to you whether to put everything into the box, or to tip some team members individually. In most Tanzanian camps, guides, trackers and butlers are usually tipped direct, while other staff benefit from the ‘general staff tip box’. But this varies, so do ask!

It’s most common to tip in cash, ideally Tanzanian shillings or US dollars. Although some camps offer the option to tip by credit card, this depends on their accounting practices and their ability to process cards. Tipping by card isn’t the norm in Tanzania, and it can make it difficult to direct your tips to specific members of staff.

For travellers willing to think ahead, it can work well to bring a small supply of envelopes, perhaps with a card inside on which a ‘thank you’ could be written. Then towards the end of your stay, you can address the envelopes for the individuals or groups of staff whom you wish to tip, put the appropriate amount into each, and either hand them out or put them into the general tip box.

The amounts we suggest here are just guidelines based on our experience of safaris in Tanzania. Tipping is a matter of personal opinion and individual satisfaction – moderated by some understanding of the issues mentioned above.

Given that, we’d recommend that for good service, our travellers tip around:
In reference to the impact on the economy, note that the gross national income (GNI) in Tanzania is about US$2.49 per person per day. This is a reflection of the average income of Tanzania’s citizens.

In conclusion, we want to highlight that while tipping is a sensitive issue, there is no need to feel embarrassed as it is a normal part of the service industry in Tanzania. But please remember that relatively affluent visitors can have a big impact on the local economy. Tipping unwisely can distort the economic and social balance, so we would ask you to keep that in mind when you tip the staff during your safari in Tanzania.

Our top picks for holidays to Tanzania

Stay in three unique camps as you safari across the Ngorongoro Crater and the iconic Serengeti Plains with your private guide and 4WD vehicle: a trip of comfort and autonomy, with excellent wildlife.

Enjoy a combination of privately guided and shared game drives during this good-value exploration of northern Tanzania. Explore game-dense regions from three comfortable bases which offer a variety of activities.

Enjoy a range of activities on this luxury fly-in safari. Explore the remoter regions of Ruaha National Park and Nyerere National Park with phenomenal guides during stays at two impressively comfortable camps that remain perfectly in keeping with their surroundings.

View all holidays in Tanzania