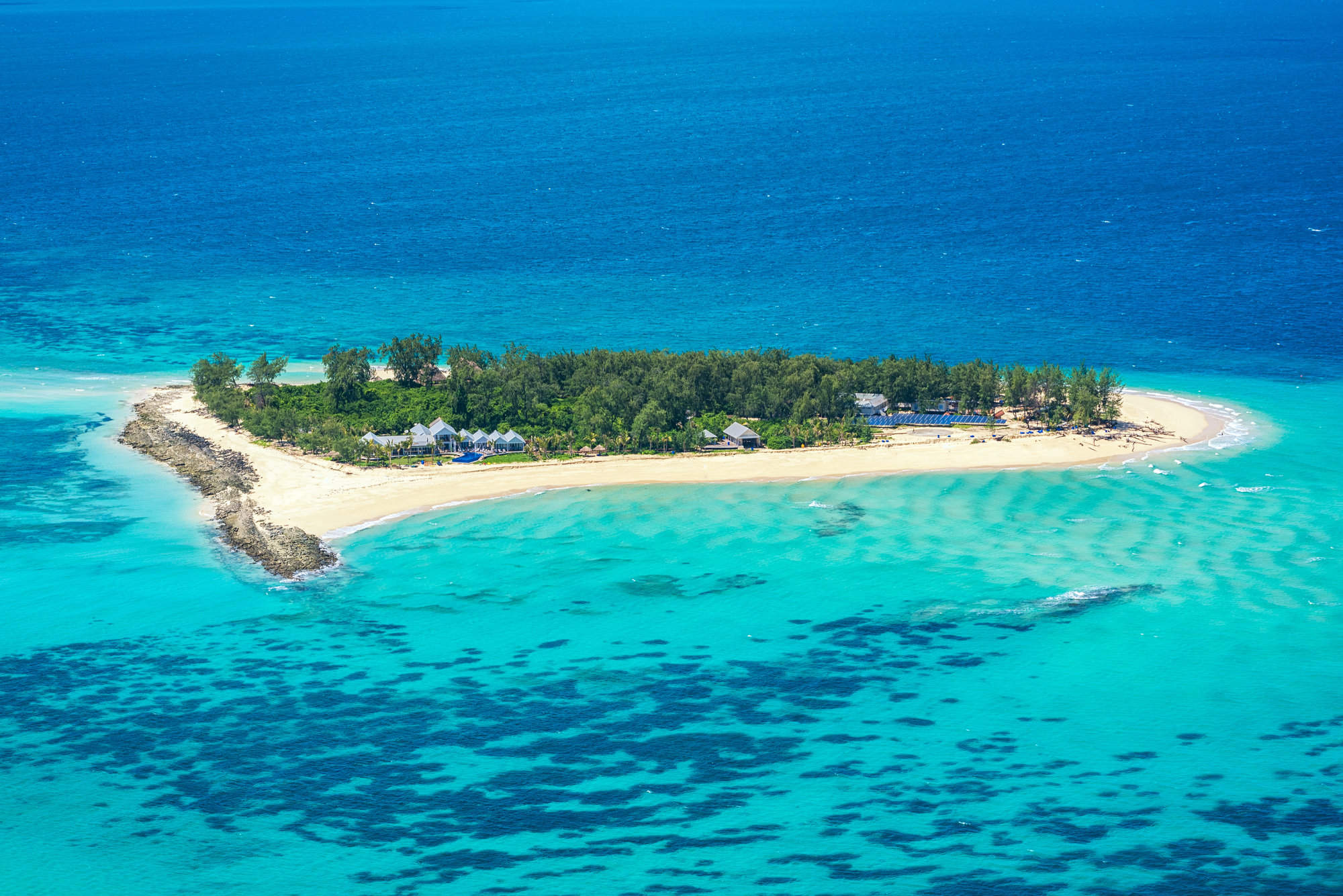 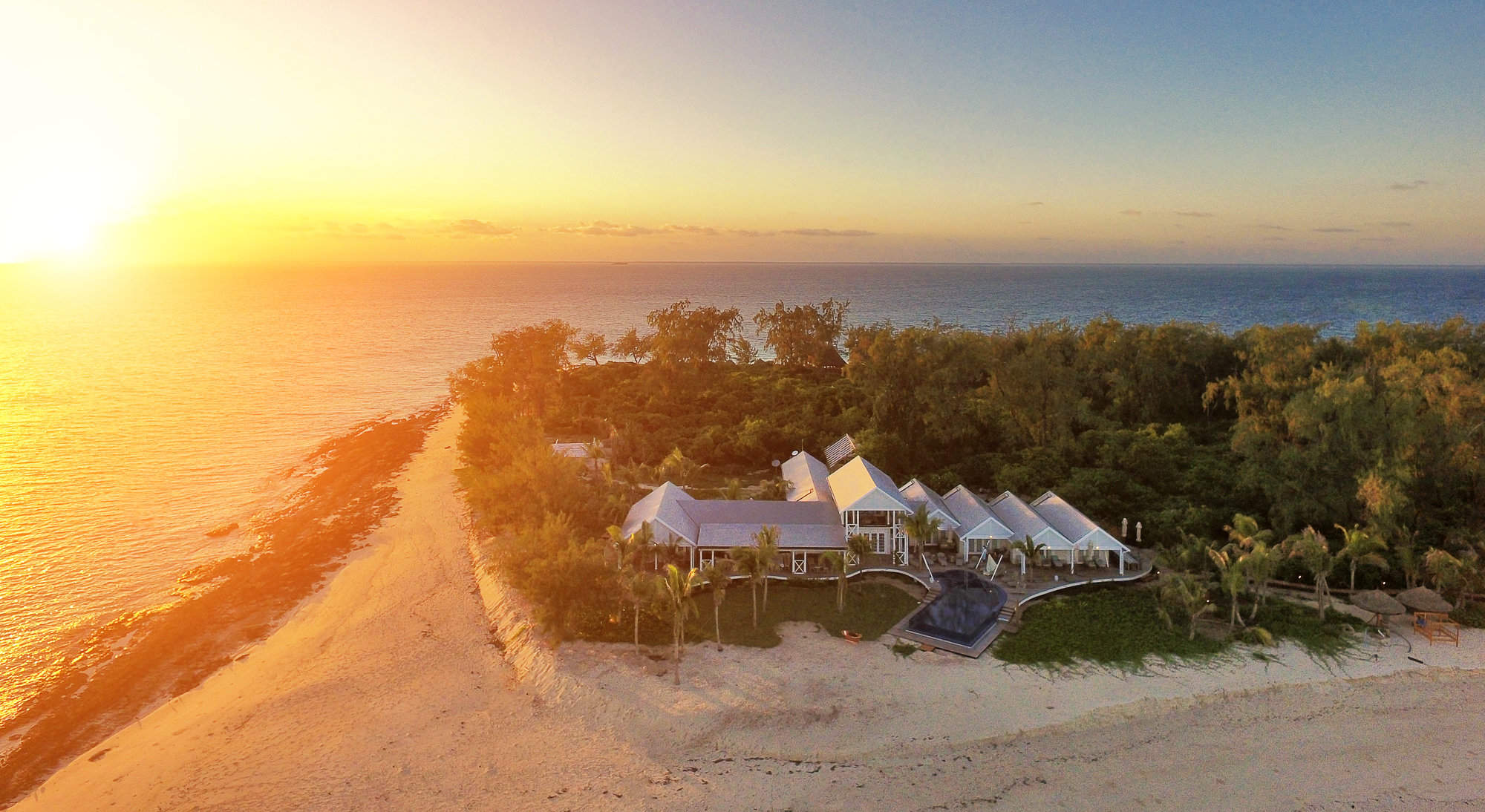 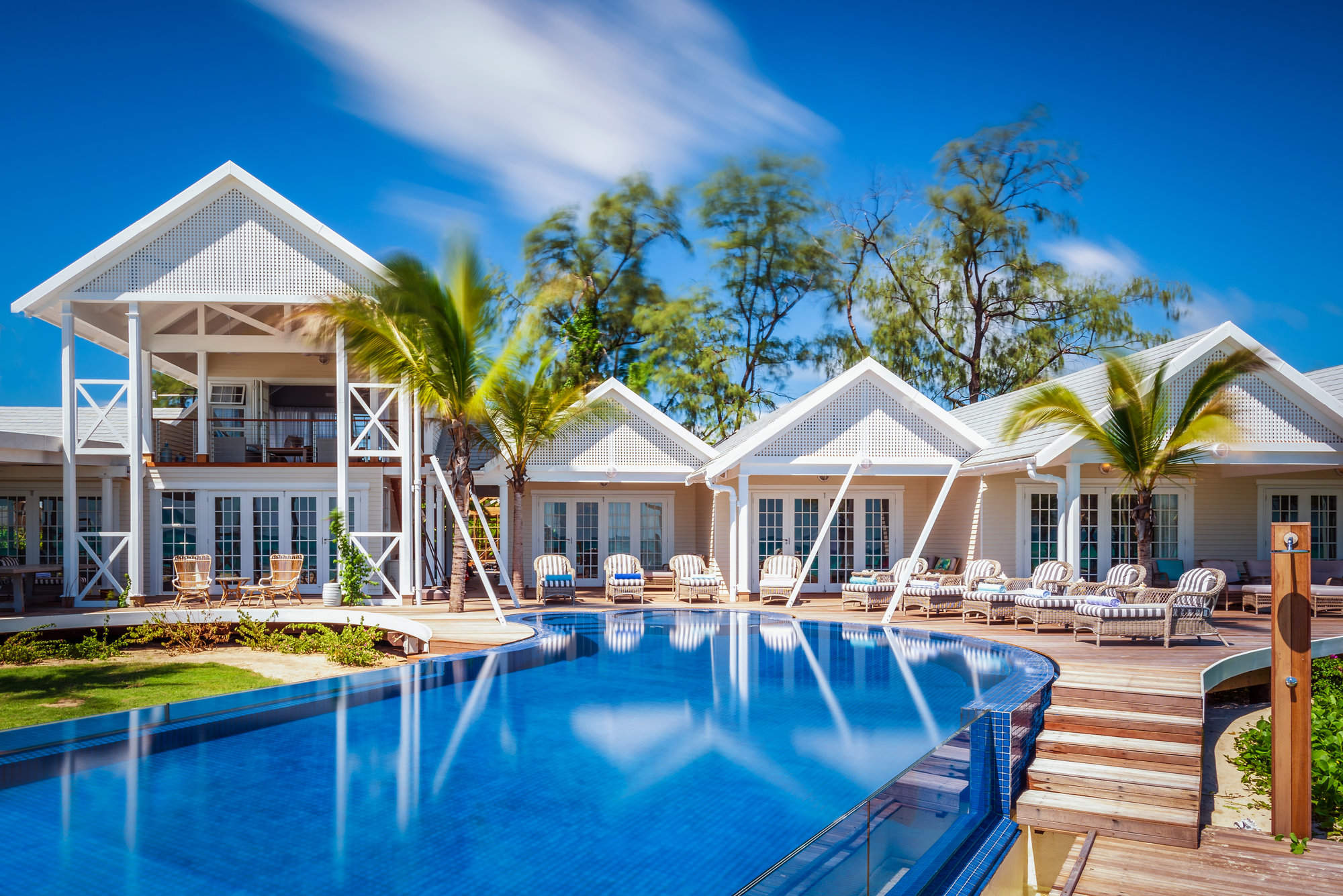 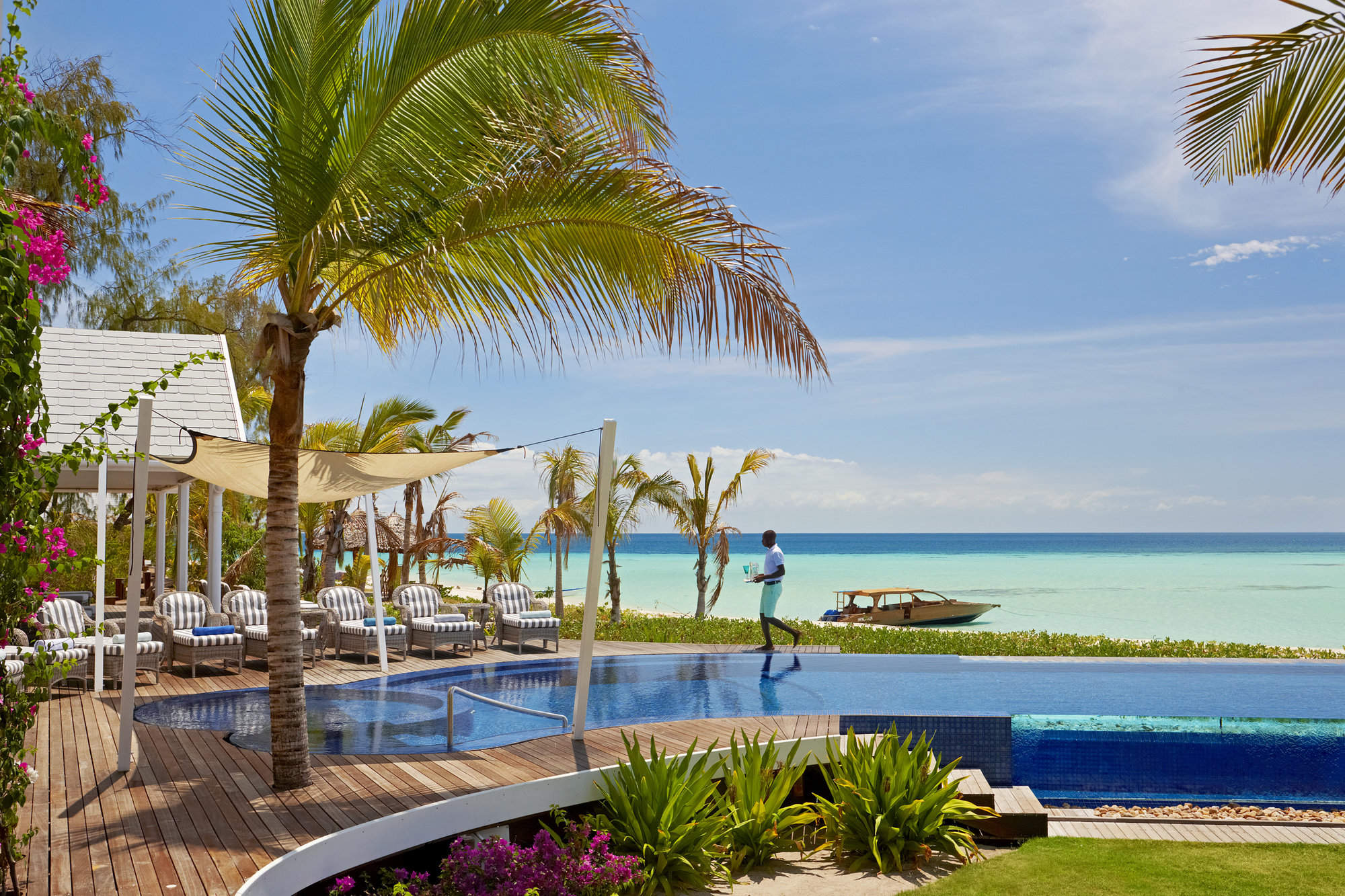 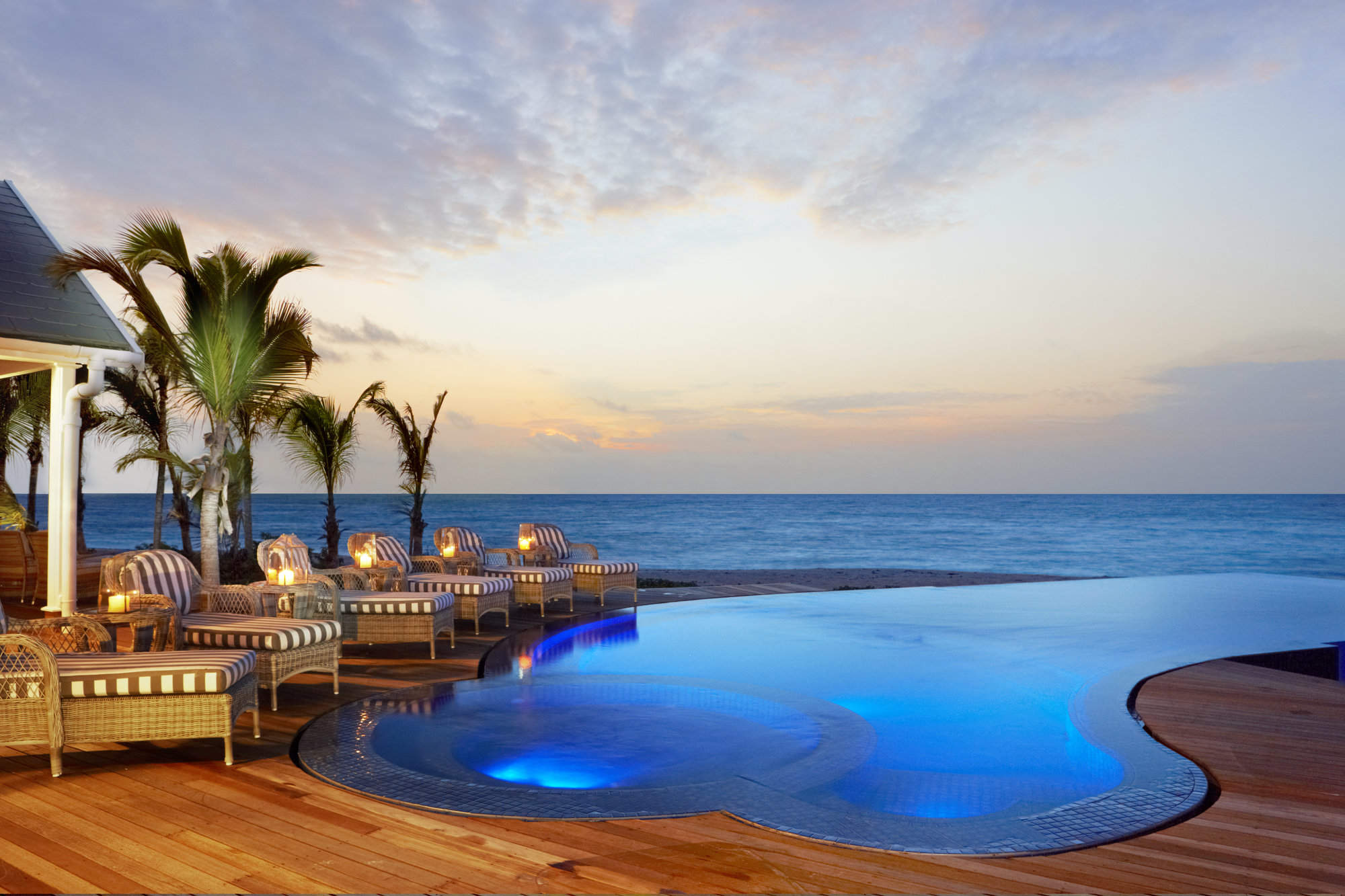 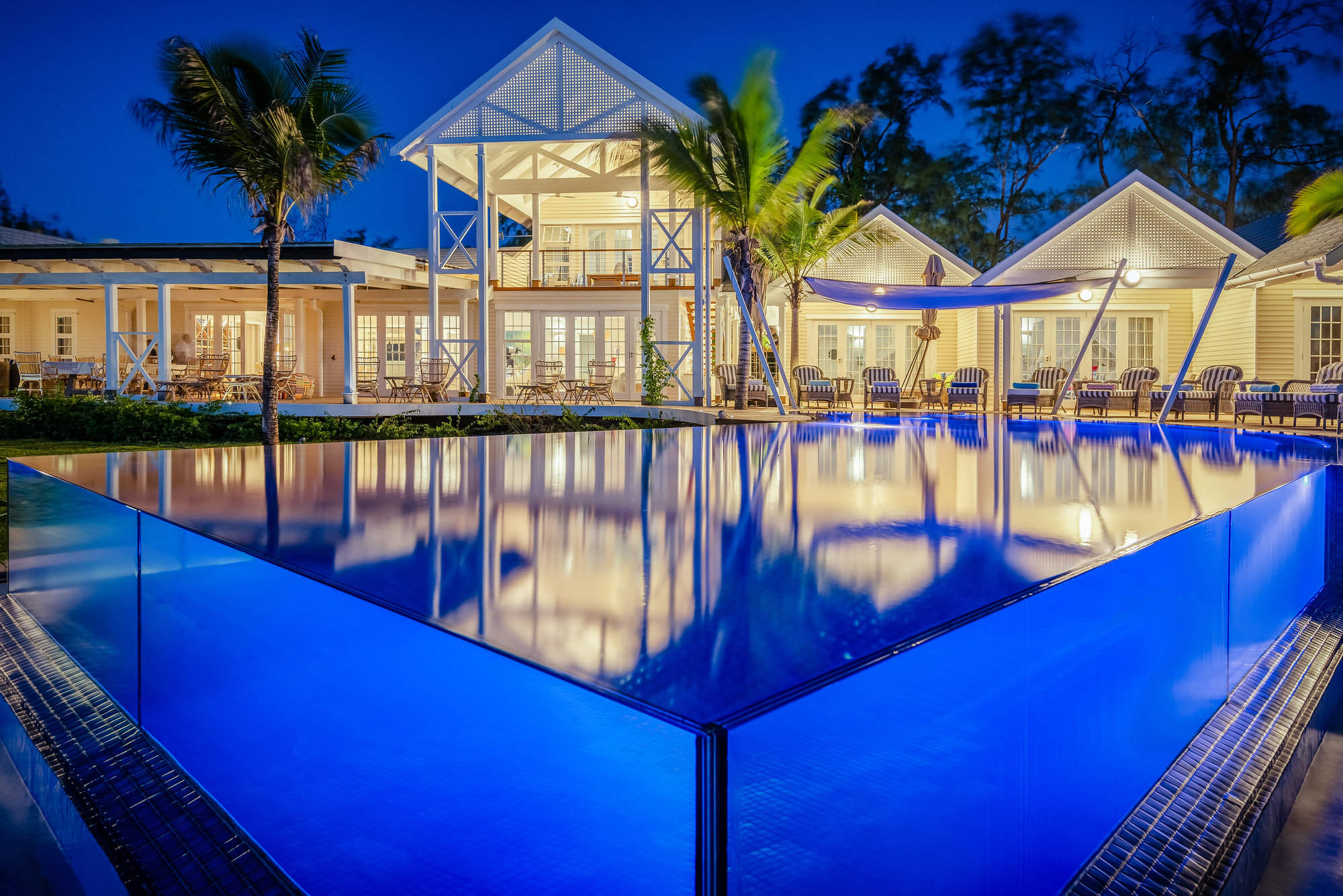 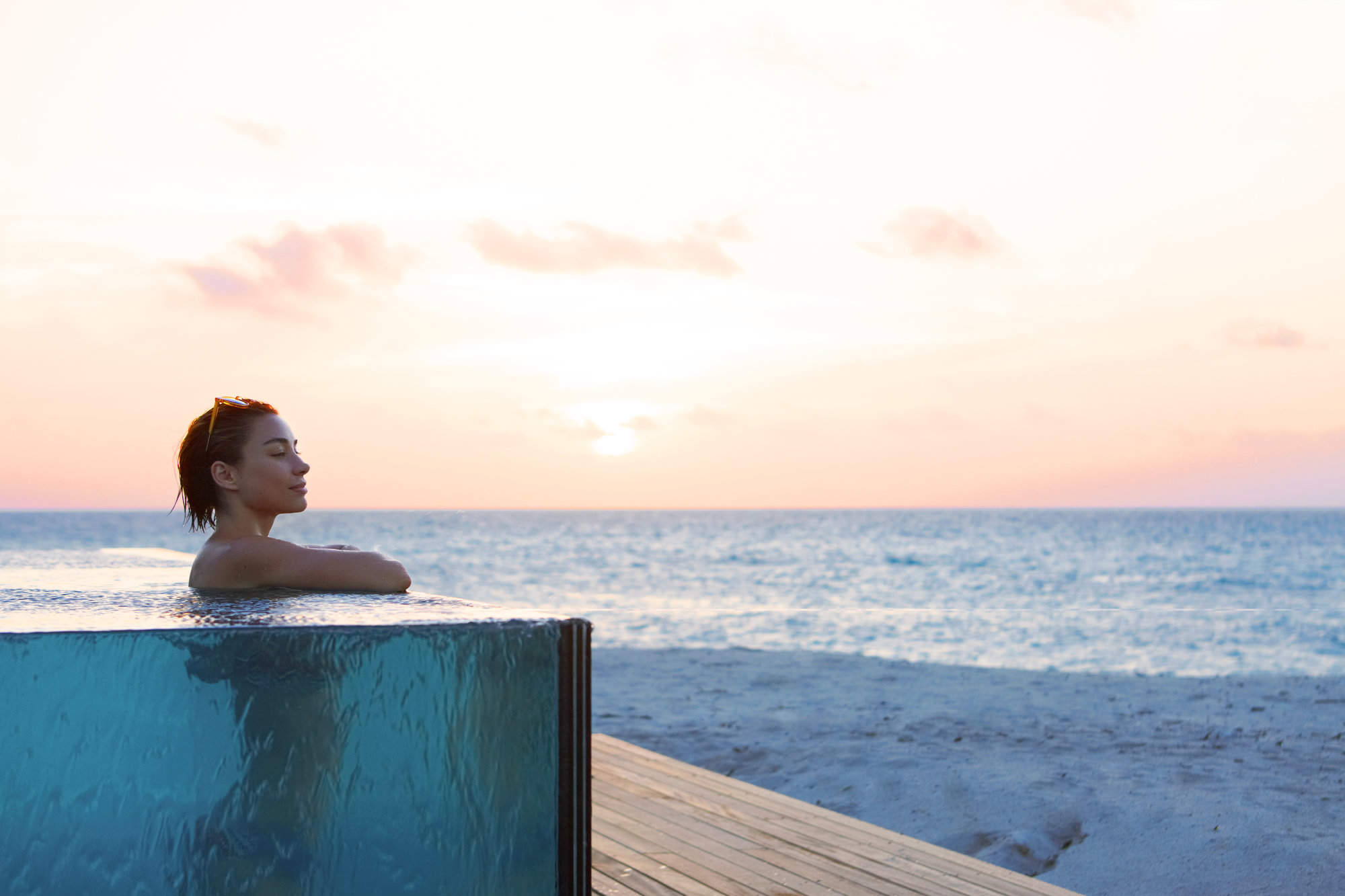 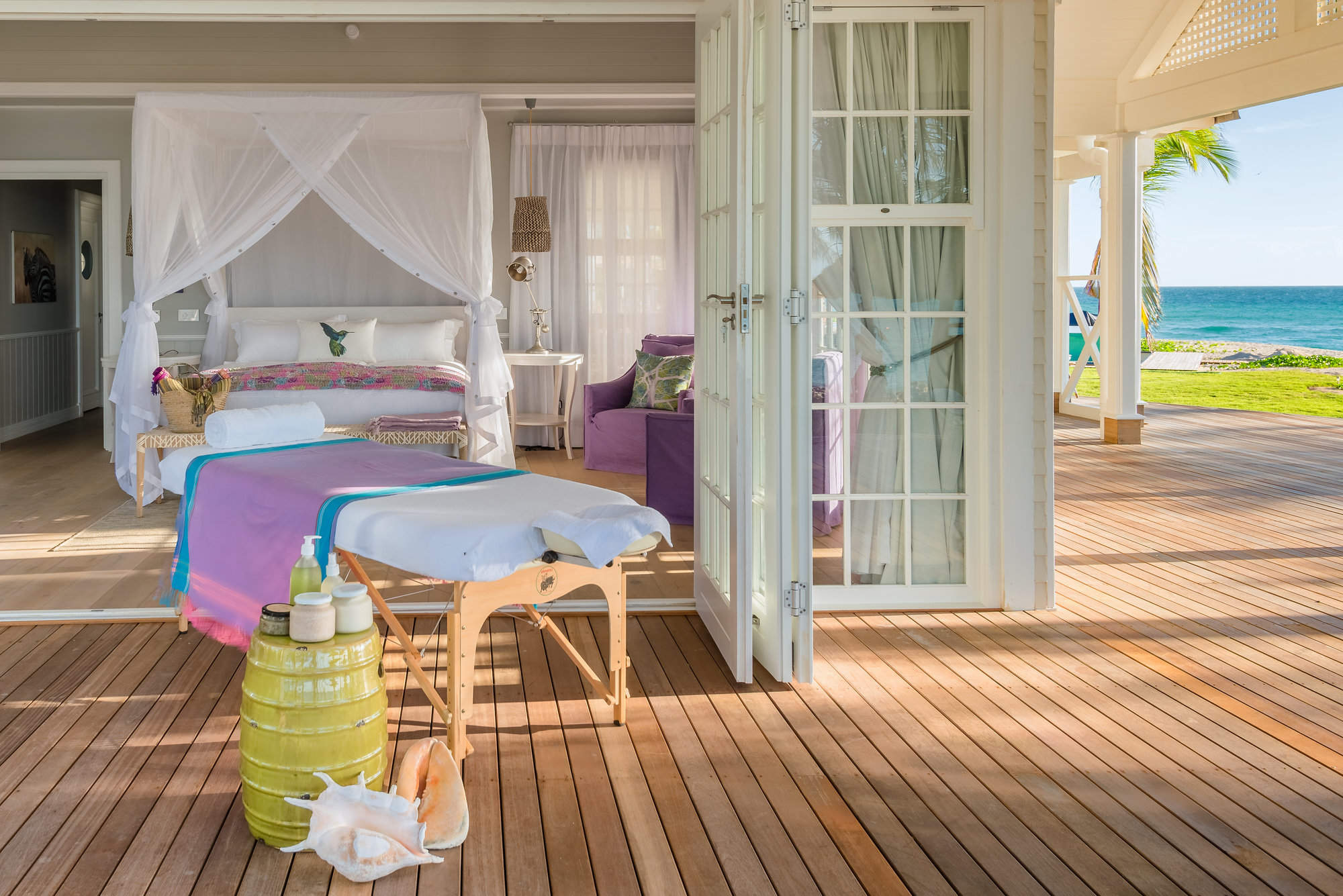 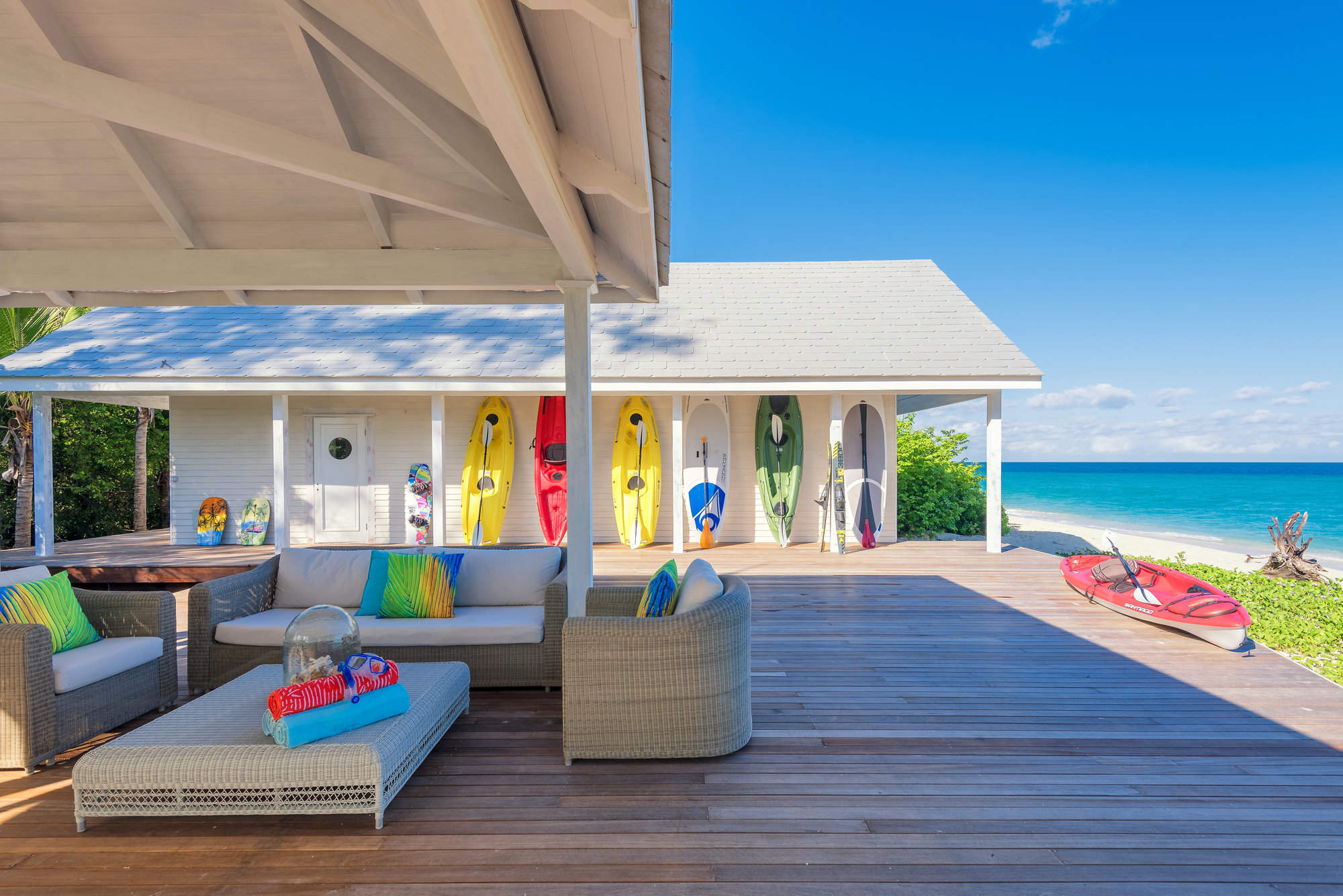 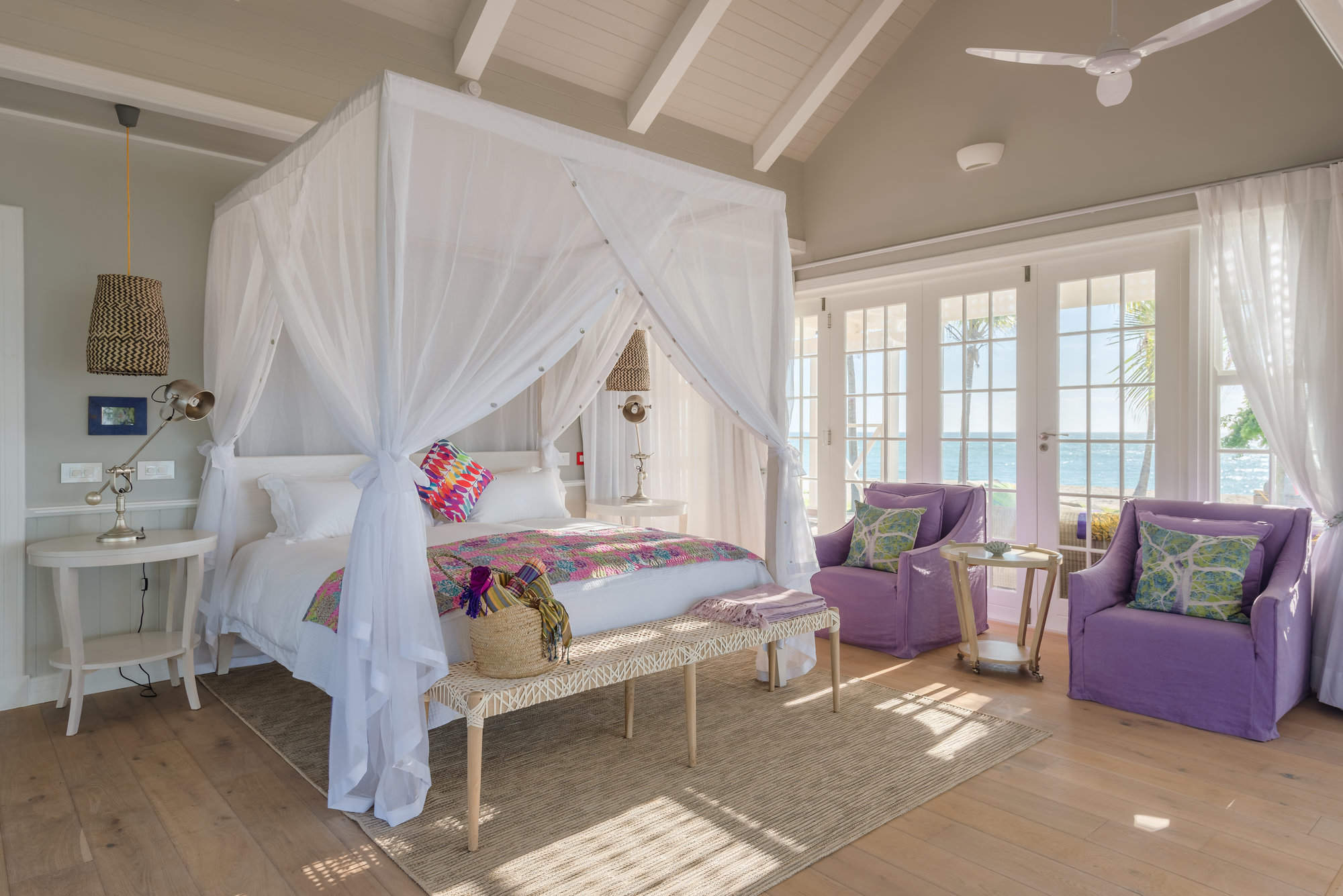 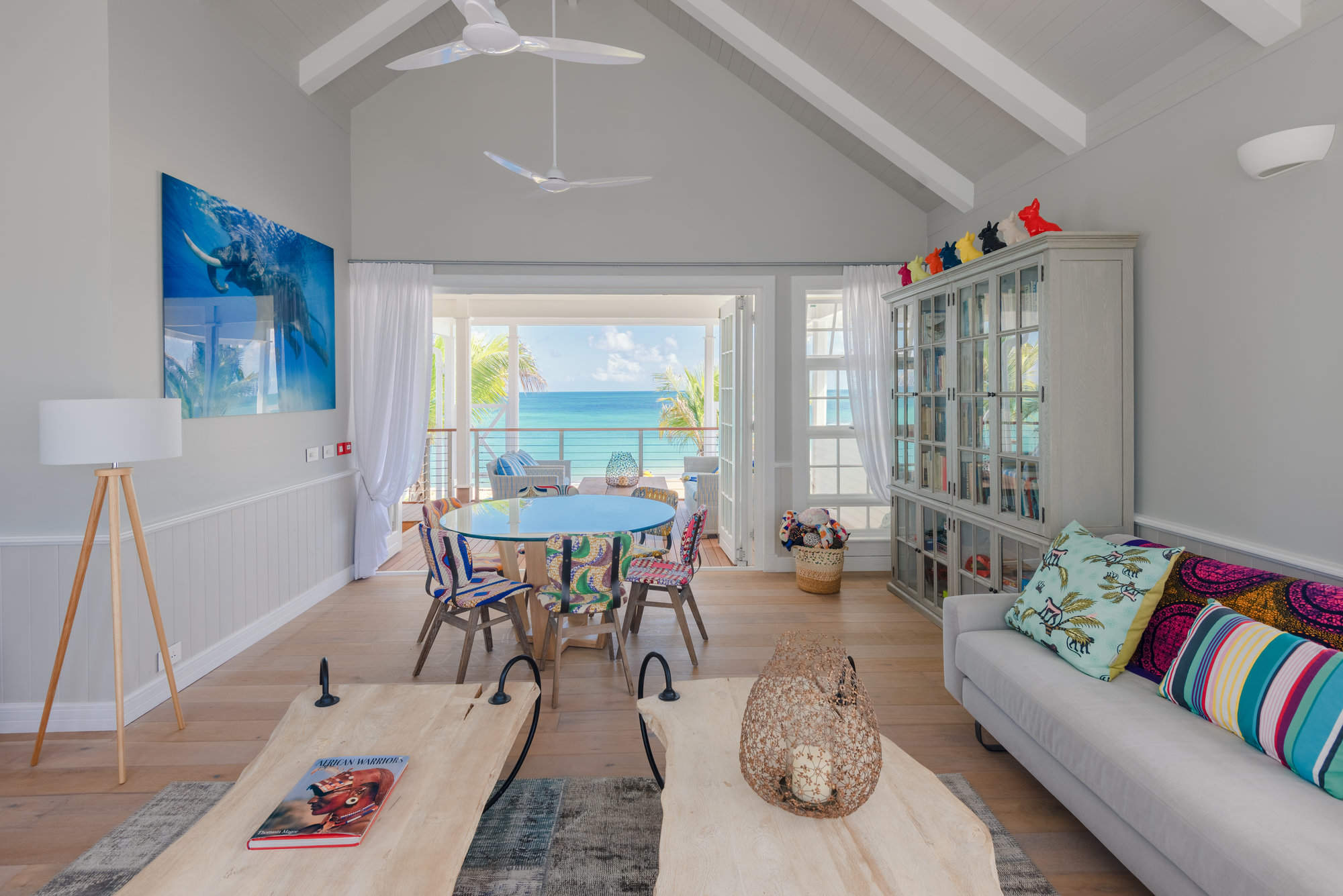 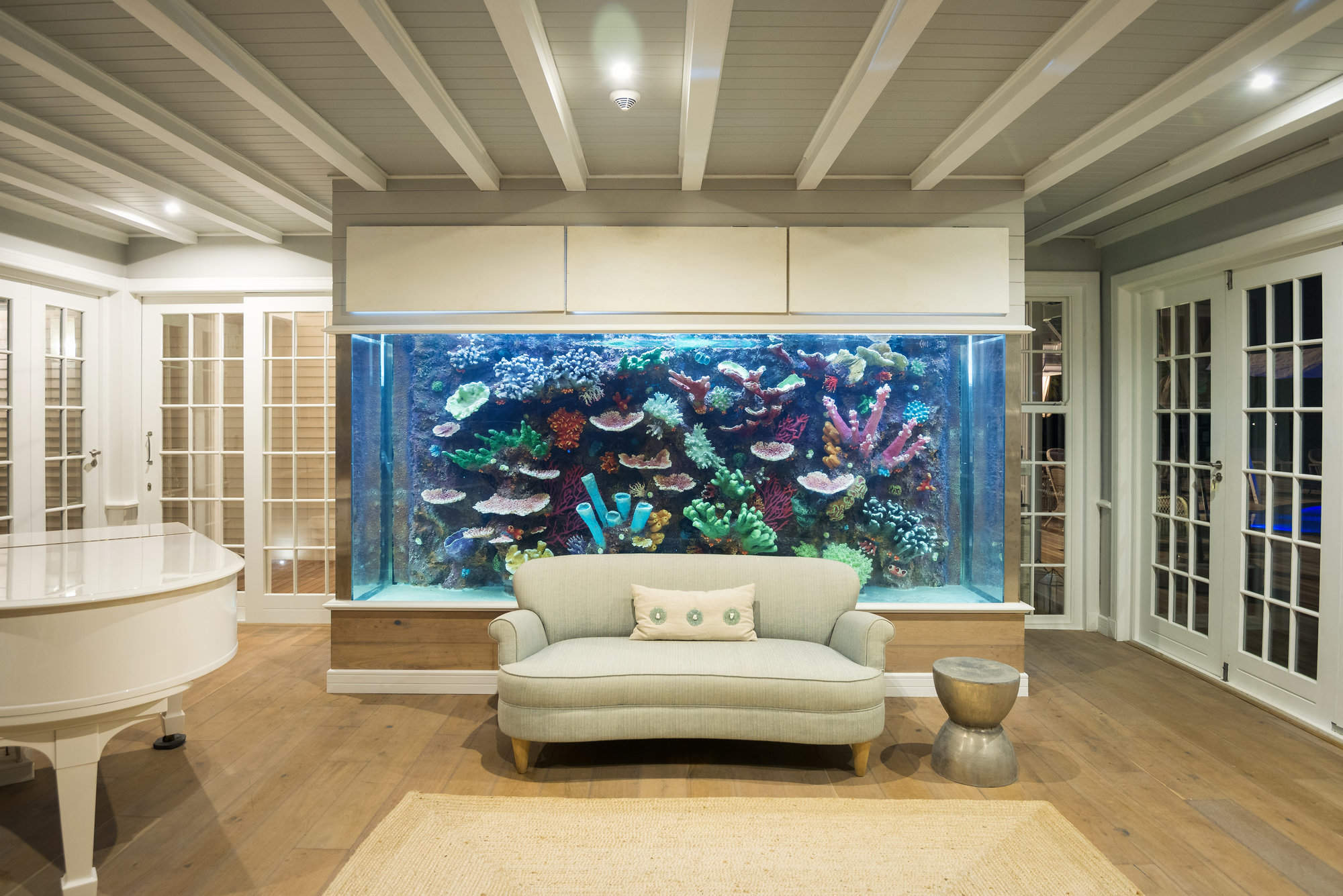 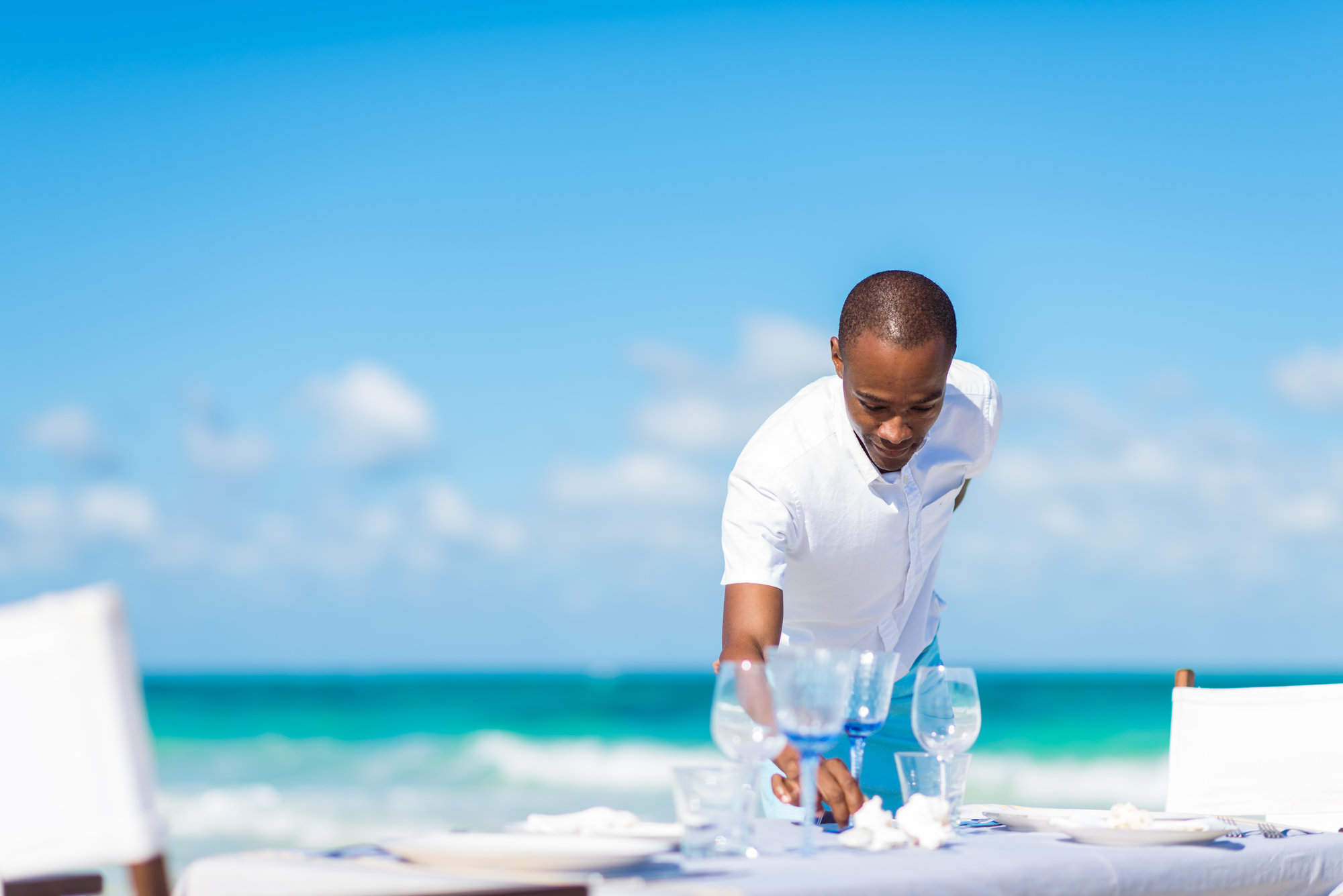 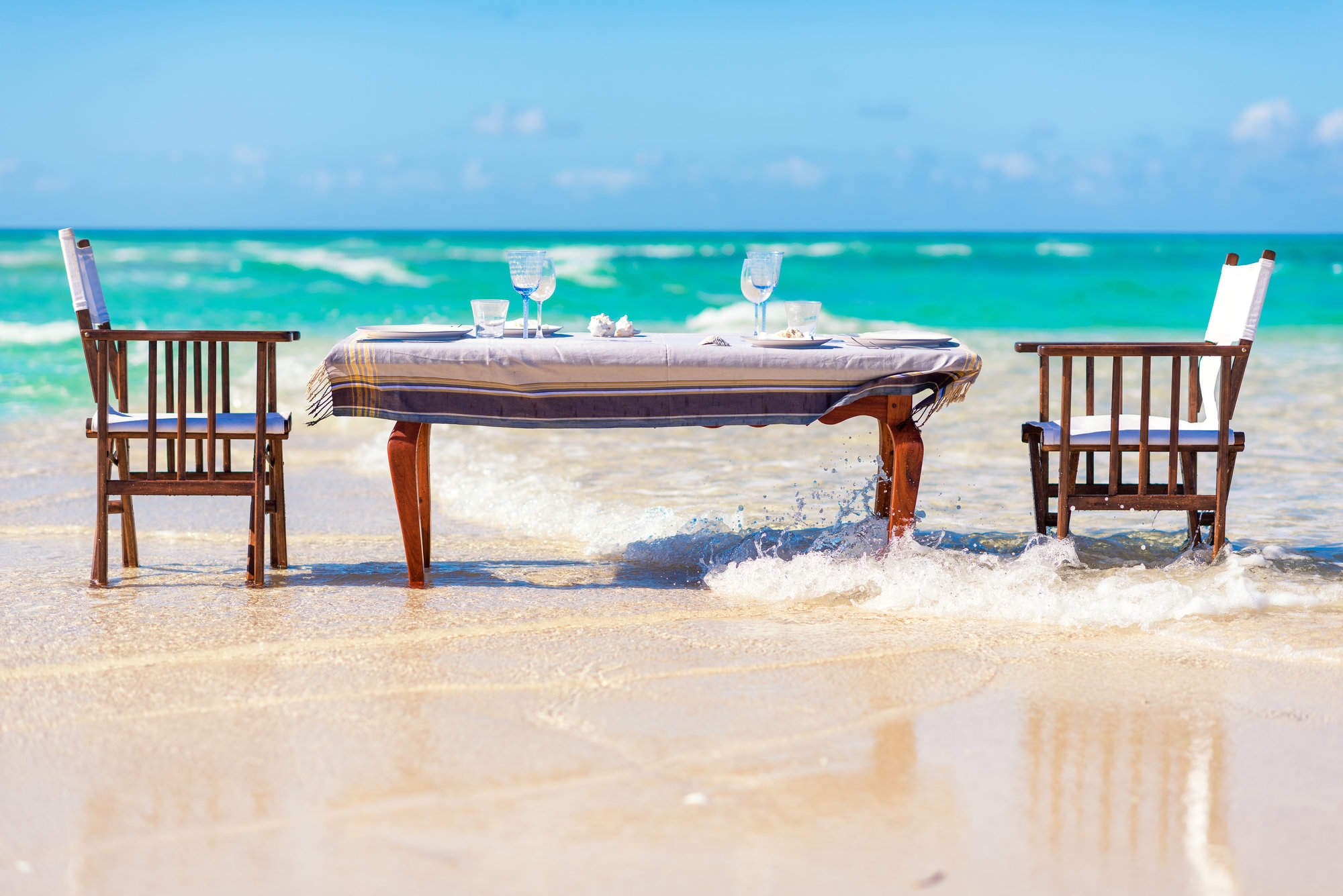 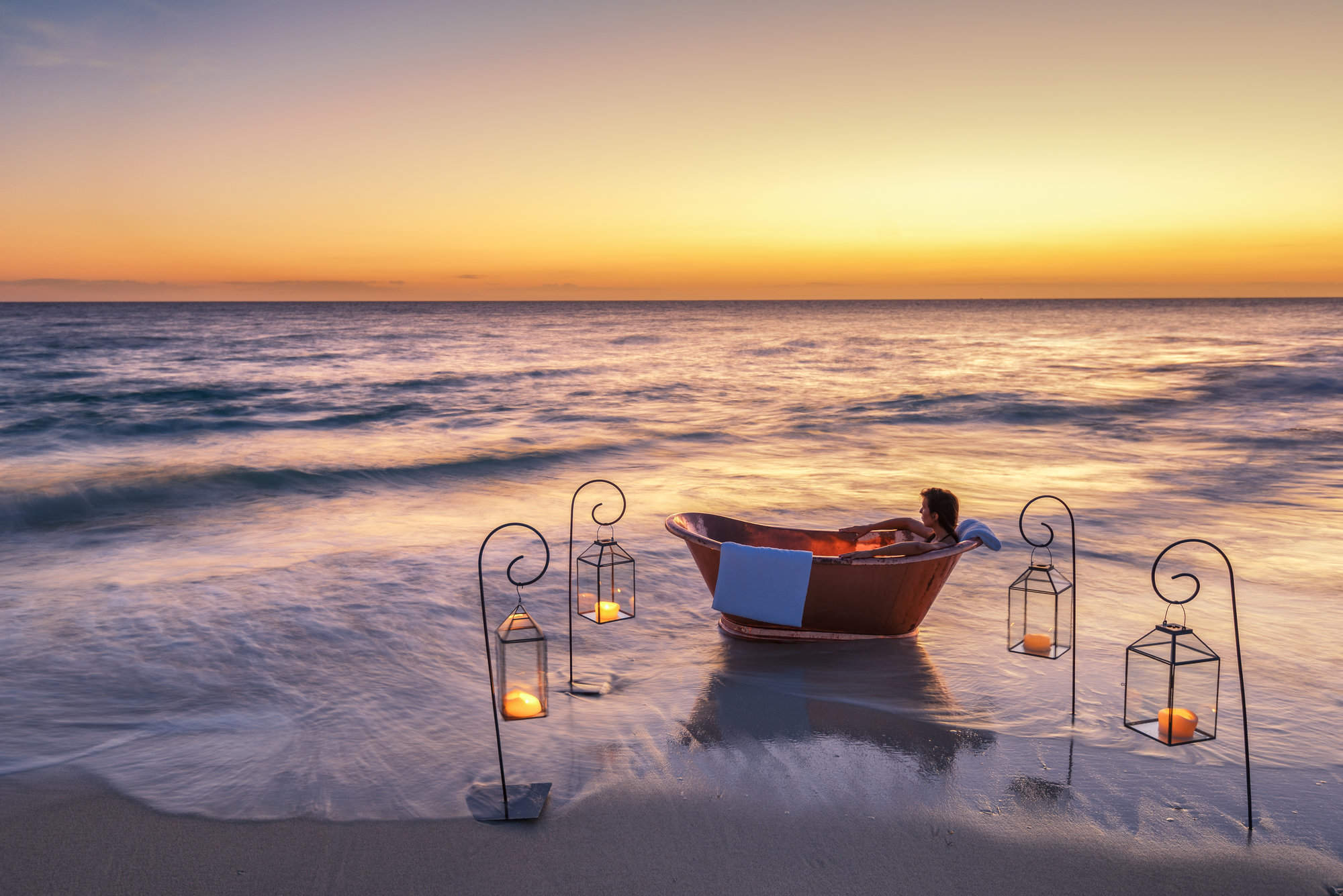 Situated about 28km off the Tanzanian coast, and 13km north of the laid-back island of Mafia, the tropical ...

... Thanda Island (also known by its original name, Shungi Mbili) measures just 250m x 200m, and is fringed by exquisite white beaches. Offshore, sandbanks and coral reefs lie under the turquoise waters of the surrounding Indian Ocean. Nobody has ever lived here, but in April 2016 an opulent five-bedroom villa opened on Thanda Island, catering to only one group at a time. So this island is always private: an exclusive retreat that you won’t have to share with anyone else.

A Swedish multi-millionaire originally built the villa as a holiday home for his family, who still visit a couple of times each year. From the moment you arrive on the shores of Thanda Island, either by speedboat or helicopter, you feel like you’re entering in to a moneyed friend’s beach house. Albeit very few people can claim to have a home quite like Thanda!

Painted entirely in white, the exterior of the villa has drawn influence from the ‘Kennedy Compound’ in Cape Cod. It wouldn’t look out of place on the East Coast of the United States – the only thing missing is a white picket fence! The interior has been designed in a modern Scandinavian style, where neutral space is seen as the ultimate luxury. Soft creams and relaxing pastel colours have been used throughout and on our last visit, in June 2016 – just two months after Thanda first opened – we were told that ‘everything is designed to go with white’.

Mounted on one wall of the main lounge is an extensive wine collection; on another, a stunning indoor marine aquarium contains a number of brightly coloured indigenous fish. The owners are all musical and in one corner you’ll find a number of instruments: guitars, drums and even a full-size, white, grand piano! Bose speakers and Marshall amps provide ambient music and guests are welcome to help themselves to a cigar from the humidor! There are a number of comfortable armchairs, deep sofas and a large dining table that is often used in the evening, or if it is windy outside. For those interested in stargazing there is also a state of the art telescope.

Upstairs, a cinema room features a 49-inch curved television, along with board games and a selection of toys. There is also an extensive library that includes the entire works of the owner’s favorite novelist, Ernest Hemingway.

The villa has five spacious and simply decorated en-suite bedrooms. These are cleverly designed to be interconnecting, making Thanda a very easy place for families with small children. All the rooms have king-size beds, and an extra bed can be added to each to give a maximum occupancy of 15 in the villa. Each room also features a huge walk-in pine wardrobe, and a door that opens onto a private veranda, with direct access to the beach beyond.

The large en-suite bathrooms include two inside showers, an outside shower and an outside bath. Circular windows resemble portholes and vintage marine cage lighting continue the nautical theme.

Outside, a large area of decking encircles the villa, providing options for alfresco dining. You'll also find a pizza oven, a bonfire area, table-tennis table, barbecue and cocktail bar. There are stylish places to sit in seemingly every corner, inside and out: colourful beanbags, cocoon chairs and cushioned loungers.

The most striking feature of Thanda is undoubtedly its stunning swimming pool. Unusually it is built above ground, with a glass front that results in the ultimate infinity pool: if you’re in the pool, the turquoise waters blend seamlessly into the Indian ocean beyond.

Across the island there is an area they’ve named ‘turtle beach’, where guests can sleep out in one of two rustic, open-fronted bandas. These are also used for groups that are too big to stay in the villa at once. Each of the bandas has two double bedrooms and so they can comfortably sleep eight people at a time. It is on this eastern side of the island that a yoga deck is located, which also doubles as a place to have breakfast and watch the sunrise.

Thanda Private Island also caters brilliantly for anyone who is more active. When we visited in 2016 the finishing touches were being made to a brand-new gym and tennis court. Inside the boathouse there are two Laser sailing boats and a deep-sea fishing boat, so guests can enjoy sunset cruises and fishing trips. Some of the watersports available include wakeboarding, waterskiing, jetskiing, tubing, banana boating, kayaking and paddleboarding. For all of these activities brand new kit is available and there is also staff on hand to help train beginners.

Thanda’s existence has helped to establish a new and much-needed marine reserve around the island: Shungi Mbili Island Marine Reserve. There are also plans to protect a marine area around the nearby Nyororo Island. So the best snorkelling and diving spots are still being discovered, but the mineral-rich water, fed by the Rufiji River delta, means that there is always plenty to see on Thanda's private coral reef. Trips to Chole Bay on the other side of Mafia Island can also be arranged if you want to dive further afield. Between November and February, whale sharks are regularly seen in the stretch between Thanda and Mafia Island, and trips to snorkel with these gentle giants can be easily arranged.

The owners of Thanda Island make much of having a low carbon footprint and place a lot of emphasis on sustainability. The whole island is powered by solar energy courtesy of a hugely impressive solar farm, and water is treated by an on-site desalination plant.

While Thanda Island commands a high price tag, it is worth noting that the cost is fixed for the whole island, so it becomes more economical with the more people that stay there.

Thanda Private Island is simply outstanding: a picture-perfect tropical island that’s stylishly designed and provides impeccable levels of service. It is a fantastic option for parties of 10–15 people travelling together looking for an all-inclusive, luxurious retreat. In our view, a stay on Thanda Island ranks among the best beach holidays available anywhere in East Africa.

Location
Mafia Island, Tanzania
Ideal length of stay
3 - 4 nights however there is a 7 night minimum stay from December through to March.
Directions
Thanda Island can be accessed from Dar es Salaam either by an internal flight to Mafia Island followed by a 45-minute boat ride from Kilindoni, or direct by private helicopter.
Accessible by
Fly-and-Transfer

Usual board basis
Full Board
Food quality
Based on our visit to Thanda Island in June 2016, the food here is first class. All meals are original and prepared fresh from the high-quality seasonal ingredients. As you might expect, most dietary requirements can be catered for, and meal times are absolutely flexible.

We enjoyed a four-course lunch that was interspersed with clever amuse-bouches.

We started with mackerel tartare with orange zest and basil, which was followed by an intensely fruity watermelon sorbet. As a second starter, there was a mango, avocado and jumbo prawn salad with a coriander, soy and honey dressing. This was followed by a delicious piña colada sorbet. The main event was roast kingklip with caramelised carrots in ginger. A decadent crêpe Suzette finished off what I can only describe as the best lunch ever!

Family holidays
Any large family looking to splash out on a private island experience for a family holiday in Tanzania should seriously consider booking a trip to Thanda Island. All of the rooms are inter-connecting and there is a huge array of activities available.
See ideas for Family holidays
Beach holidays
Thanda Private Island offers a stunning private island experience. If the sheer number of activities on offer here isn’t reason enough to come then the location certainly is. If you are travelling as a group consider this exclusive island for a beach holiday in Tanzania.
See ideas for Beach holidays
Luxury
Thanda Island offers the ultimate exclusive beach holiday. You only share the island with a few handpicked staff including an excellent private chef and enthusiastic water-sport instructors. Impressive décor includes locally hand-carved furniture and even a Steinway grand piano!
See ideas for Luxury

Attitude towards children
You will have exclusive use of the entire island so all children are welcome on Thanda.
Property’s age restrictions
None
Special activities & services
Thanda Island is very well set up for young children as toys, games, and baby cots are all provided, and the staff will also happy babysit – although they are unlikely to have child-minding qualifications.
Equipment
Both cots and high chairs are provided, and the rooms all interconnect, making them suitable for families with young children.
Generally recommended for children
Yes
Notes
Thanda Island has a deep swimming pool and is surrounded by the ocean so children should be supervised at all times.

Power supply notes
There is 24-hour electricity throughout the villa.
Communications
WiFi and cellphone reception are available in the villa.
TV & radio
There is an impressive cinema room with a huge TV.
Water supply
Other
Water supply notes
All of the rooms are plumbed in with running hot and cold water available 24 hours a day. The water is all treated by a state of the art desalination plant and is fine to drink.

Disabled access
On Request
Laundry facilities
A full laundry service is included.
Money
There are safes in all of the rooms.
Accepted payment on location
There are credit card facilities and cash in all major currencies would be accepted, although it is extremely unlikely that you will need to pay for anything on the island.