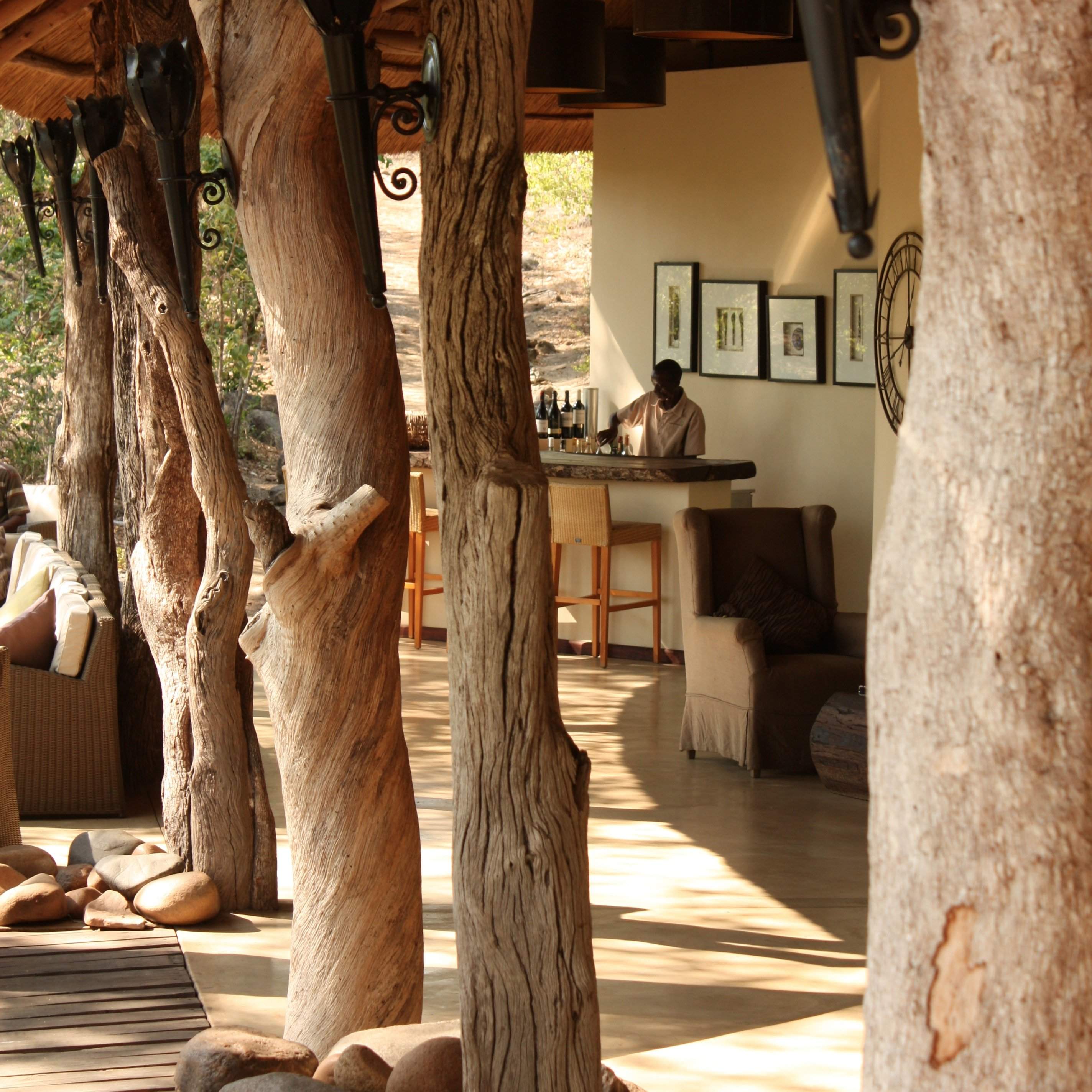 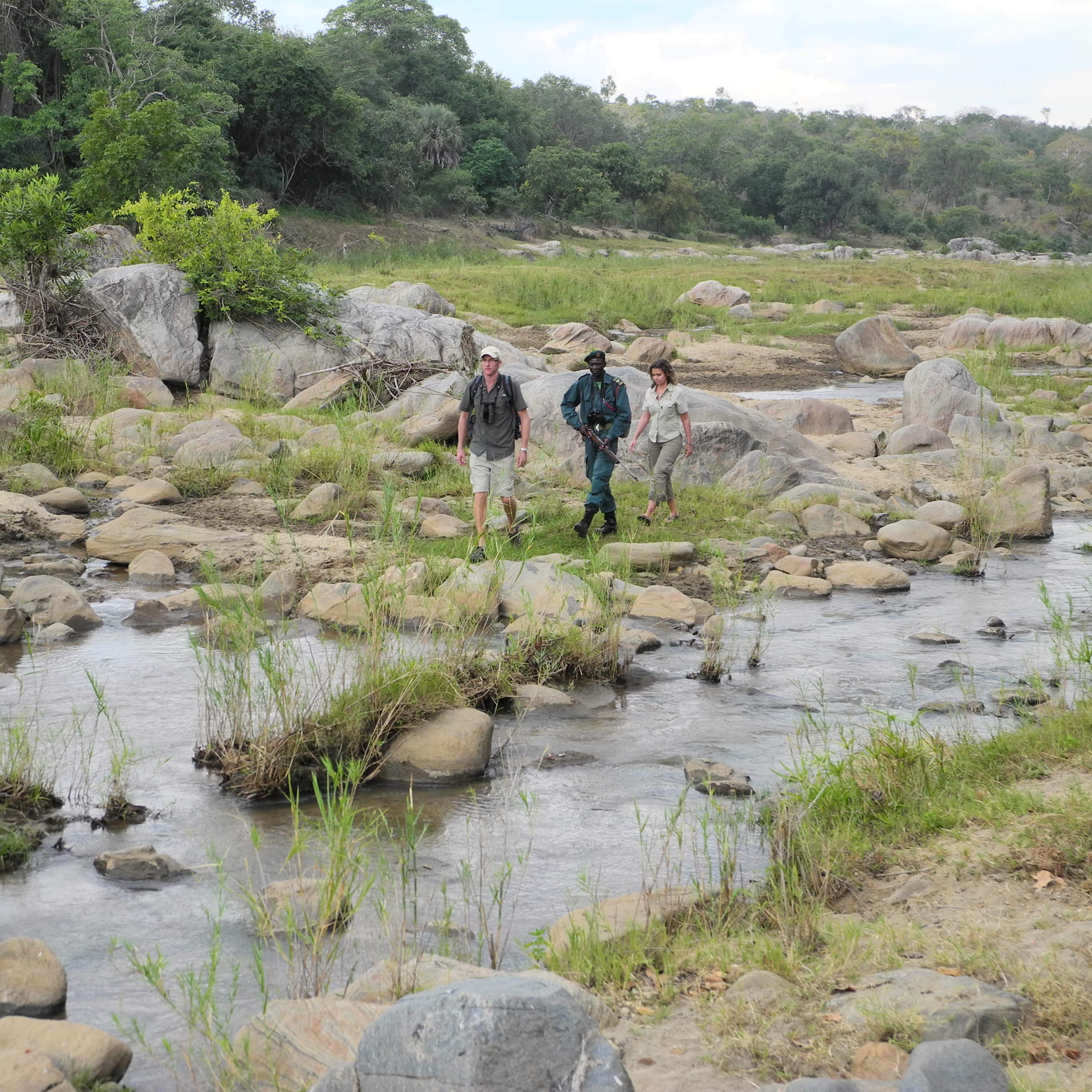 Overlooking tumbling rapids at the confluence of the Shire and Mkulumadzi (sometimes written 'Mukulumadzi' ...

... or even 'Mkurumadzi') rivers, is the smart and solidly built Mkulumadzi Lodge. Opened in 2011, it is owned by Robin Pope Safaris and incorporates some innovative 'eco' ideas. The lodge is located in a 70km2 private concession, within the newly revitalised Majete Wildlife Reserve.

Majete Wildlife Reserve was proclaimed in 1955 and covers 700km2. In 2003 it was taken under the management of the African Parks network, which has done great work to ensure the long-term viability of the park and its wildlife. The reserve is home to the ‘big five’, including a very small population of lion and leopard, which seem to be breeding and gradually establishing themselves. It already has good populations of antelope and very varied birdlife. Environmentally, Majete benefits from a variety of dry-land habitats, from miombo woodland to small kopjes, while riverine woodlands line some of the waterways – which themselves vary from a placid lake to sections of bubbling rapids and ephemeral tributaries.

On arrival at Mkulumadzi, guests cross a suspension bridge over the Mkulumadzi River. The extensive main area, under a high thatched roof, has one side completely open to the river – supported by huge old leadwood trunks. Tastefully decorated and accessorised in a classic and contemporary style, it has indoor and outdoor dining areas, a bar lined by bar stools, and seating areas on different levels, all with views of the river. To one side you’ll find a small curio shop and a swimming pool, surrounded by a wooden deck with sunbeds and umbrellas.

The eight spacious chalets at Mkulumadzi are spread out along a high riverbank overlooking the Shire River, shaded by giant leadwood and wild mango trees, and affording total privacy. All are furnished in a contemporary style using locally sourced materials, and all except one have vegetated roofs planted with indigenous succulents and grasses. This helps them to blend into the environment and also keeps the rooms cool in summer. By contrast, the honeymoon suite has a traditional high thatched roof.

In six of the chalets a king-size bed takes centre stage, facing an impressive view of the river beyond a partially shaded wooden deck. (Two of these beds can be converted to twins on request.) This side of the room is largely open, with nothing to obstruct the view, though at night, cream-coloured curtains are drawn inside, and canvas blinds rolled down outside.

Inside the walk-in mosquito net – but not in the rest of the room – an innovative air-conditioning unit re-circulates cool air, using so little power that it can be run by the lodge's solar-generated electricity. In a corner of the room is a built-in seating area around a low coffee table, while shelves and hanging space are located behind the concrete headboard. There is also a stocked minibar and tea- and coffee-making facilities.

The en-suite bathrooms are again very spacious. Twin washbasins are set on a long concrete plinth beneath a lovely long mirror; a very large shower is partially open to the outside with river views; and a slightly sunken bath lies beside a large window – which folds back to open up the bathroom. Bathrobes and toiletries are provided.

On either side of the main area are two family chalets, similarly equipped to the others, but each with two en-suite bedrooms separated by a central lounge area. These chalets also have views of the river and are very suitable for two couples as well as for families.

In common with Robin Pope Safaris’ usual style, activities at Mkulumadzi are very flexible, led by experienced, top-class guides who have been trained to Robin Pope's high standards. Walking safaris are a particular feature, especially in the valley of the shallow Mkulumadzi River, and there are also two hides on the concession, overlooking a waterhole.

Morning and afternoon boat trips on the Shire River are a relaxing way to view game from Mkulumadzi. The river opens out into a lake just above the Kapichira Falls – the edges of which are a lovely place to explore in the lodge's shaded motorboat.

There is also a good network of all-weather game-drive roads, too, with night drives permitted. On a morning game drive in 2013 we saw elephant, buffalo, sable and nyala, although later that day we were not lucky enough to spot Majete’s resident lion pride, or the elusive black rhino.

We really like Mkulumadzi – it’s a stylish camp with spacious, well-built chalets. The Majete Reserve itself is rugged and, like the antelope species found here, is interesting and quite unusual – albeit it’ll be some time before its big cat populations reach their optimum size. Majete is a relatively new park, so ideal for those who want to trailblaze, and Mkulumadzi is the obvious place to stay here.

Location
Majete Wildlife Reserve, Malawi
Ideal length of stay
A stay of 3–4 nights at Mkulumadzi is ideal, especially as it's a distance from any other safari camp – and in a park that's quite unlike any other. It would be natural to combine Mkulumadzi with Robin Pope Safaris’ camps in Zambia's South Luangwa: Nkwali, Tena Tena and Nsefu, and with Pumulani beside Lake Malawi.
Directions
Mkulumadzi is about 70km southwest of Malawi's second city, Blantyre – which is linked to Lilongwe and Johannesburg by direct scheduled flights. It's about two hours' transfer from Blantyre to Majete, on a good tarred road; this is quite a varied and spectacular trip down the escarpment, and a great way to arrive.
Guests may also fly in to Majete airstrip, which is a 45-minute game drive from the camp.
Accessible by
Fly-and-Transfer

Usual board basis
Full Board & Activities
Food quality
The food at Mkulumadzi was some of the best we had in Malawi during our 2013 visit.

Breakfast is a buffet of cereals, fresh fruit, a selection of cheeses and cold meats, homemade pastries and fresh fruit juice. A cooked breakfast is also available, and was very welcome after our early-morning walk.

Lunch was a choice of butternut, feta and mint salad, or chicken kebabs with sweet chilli sauce and a side salad. Dessert was either crème caramel or a very tasty cheesecake with berry compote.

Afternoon tea/coffee and cake are served in the main area at about 3.30pm before heading out on an afternoon activity.

On return we were served a three course dinner. Our starter was a butternut filo tart. The main course was a choice of Thai green chicken curry (or a vegetarian curry) with basmati rice, or lamb chops with potatoes and baby vegetables. For dessert we enjoyed panna cotta, again with a berry compote.

Wildlife safaris
The Majete Reserve now boasts the Big Five, with lion, leopard and buffalo as well as elephant, zebra, sable, waterbuck and eland. Currently they have around 11 black rhino and cheetah are also occasionally seen.
See ideas for Wildlife safaris
Walking
Malawi’s Mkulumadzi is a small, smart camp with eight chalets and offers relaxed walking in the Majete Wildlife Reserve, where birdlife is varied and different species, including elephant, buffalo, zebra, black rhino, sable and eland, are often seen.
See ideas for Walking
Luxury
The spacious rooms with private verandas at Mkulumadzi Lodge are a comfortable spot to relax between safari activities. A clever cooling system above the beds, plus the use of locally sourced materials and vegetated roofs, ensure comfortable temperatures during the summer heat.
See ideas for Luxury

A member of the housekeeping staff can babysit for children in the evening free of charge (a tip would be welcome), but parents should note that they will not be professionally trained childminders.

Equipment
Mkulumadzi has a cot as well as baby monitors. At the time of our visit (November 2013) we were told that highchairs would be arriving during 2014.
Generally recommended for children
We think Mkulumadzi is suitable for children from ten years old. There are no activities to entertain younger children and children under the age of 12 are not allowed to do a walking safari.
Notes
Children need to be under the constant supervision of their parents as this is a remote location and wild animals do wander through the camp.

Our travellers’ wildlife sightings from Mkulumadzi

Since mid-2018, many of our travellers who stayed at Mkulumadzi Lodge have kindly recorded their wildlife sightings and shared them with us. The results are below. Click an animal to see more, and here to see more on our methodology.

Power supply notes
There is solar electricity in all the chalets, which also have plug points for charging batteries and equipment.
There is a back-up generator

There is a back up generator.
Communications
There's a satellite system for communications in an emergency, including an internet connection, but no phones are in the rooms. There is no WiFi and no cellphone reception in the main lodge, but it can be found at the office if desperately needed.

TV & radio
There are no radios or TVs here.
Water supply
Borehole
Water supply notes
The borehole water is filtered and is fine to drink. Bottled water is provided free of charge.
There is hot and cold running water available 24 hours a day.

Despite its thriving wildlife nowadays, the Majete Wildlife Reserve has not always been a prosperous environment. Back in the 1980s and 1990s, the now protected area became the subject of extensive poaching and lost a significant part of its natural wild beauty.

Fortunately, in 2003, a joint effort by the African Parks Network and Malawi Government started the reintroduction of endangered species. Mkulumadzi Lodge, one of Majete Wildlife Reserve’s prime upmarket accommodation facilitated this program by sponsoring the costs of re-stocking this reserve including lion, leopard and black rhino. In 2012 the lodge - property of Robin Pope Safaris - funded the relocation of 4 lions from South Africa into Majete, making it the first 'Big 5' reserve in Malawi.

Malarial protection recommended
Yes
Medical care
For minor ailments there is a private clinic 45 minutes' drive away. For more serious cases the closest hospital is in Blantyre, a short flight away or a two-hour drive. There is a helicopter pad at the main gate for emergencies and a doctor on call from Blantyre too. The manager is also first aid trained.
Dangerous animals
High Risk
Security measures
There is a park ranger based permanently in the camp and there is always staff on duty. At night all guests are escorted after dark.
Fire safety
There are fire extinguishers in the main areas but not at the chalets. There are waterpumps to pump water from the river and firebreaks around the camp.

Disabled access
Not Possible
Laundry facilities
Full laundry service in included – it is machined washed and line dried.
Money
There is a safe in each of the chalets. The camp is unable to exchange money.
Accepted payment on location
Credit cards are not accepted in camp, but cash payments may be made in Malawi kwacha, UK pounds, US dollars and euros.