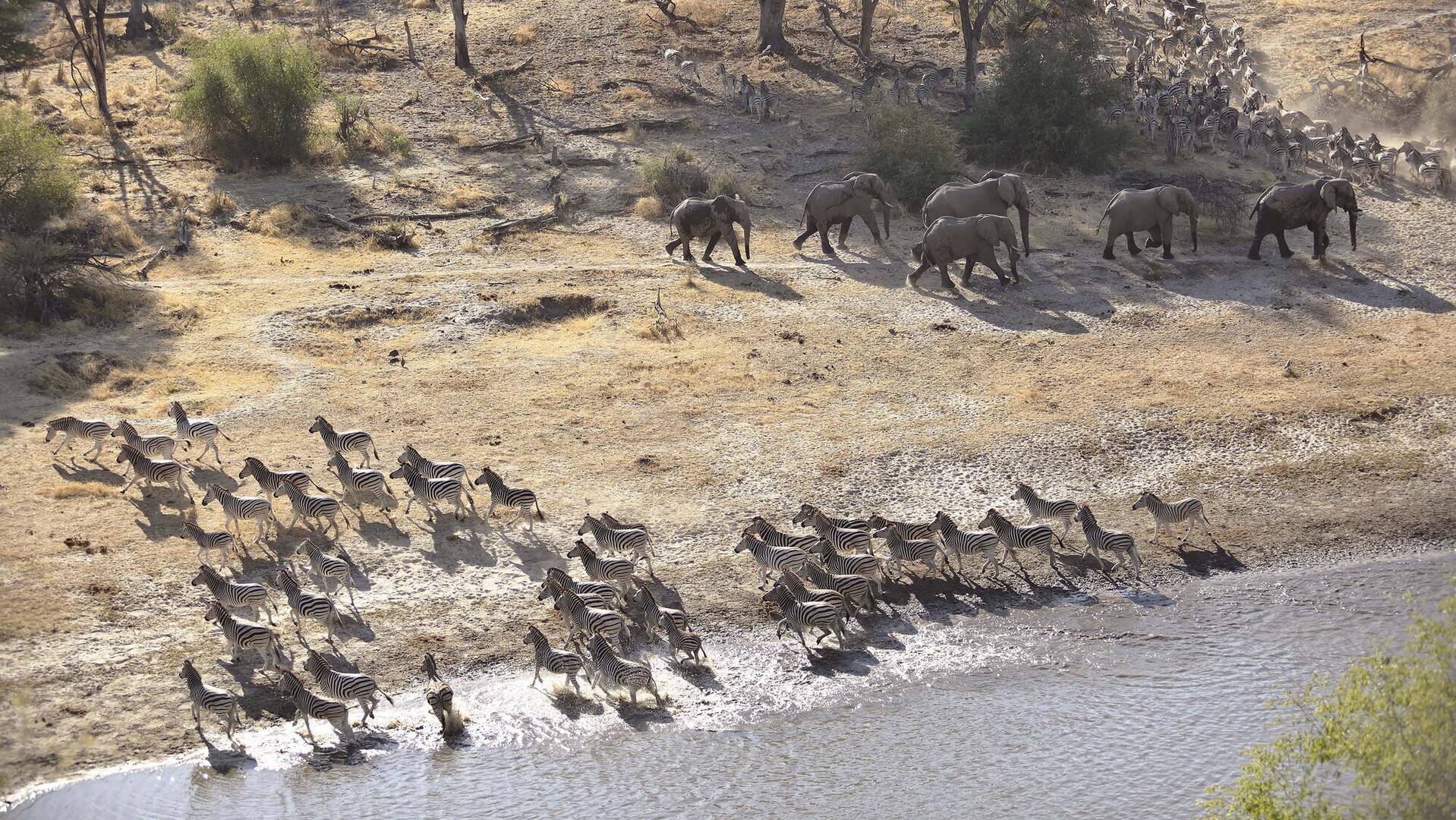 Wildlife migrations are spectacular natural phenomena which used to happen all over the globe. However, with the spread of homo sapiens, and especially of urban areas and fences – many routes have been cut off, and few really big animal migrations now remain.

In Africa, everyone knows about the wildebeest migration in the Serengeti. Animal movements in Botswana have long been known about: anecdotally much of the wildlife moves seasonally, including zebras, wildebeest, buffalo and elephants. Large numbers of these animals seem to spend the driest months beside the river systems – the Chobe, the Kwando-Linyanti and the Okavango – and then move into the vast vegetated sand-sheet of the Kalahari for the wetter months.

Until recently, the precise details of their movements were unknown, but now we’re starting to see data that quantifies these. In 2012, scientists identified a hitherto unknown migration in Botswana (and the very edge of Namibia), to Nxai Pan, which is now recognised as the longest terrestrial wildlife migration in Africa. In 2013, researchers released some detail on another, separate zebra migration, to the Makgadikgadi Pans.

These migrations are shown on the map on the right. The moving red area represents the main herds. For more information on these areas, see also:
► Interactive satellite map of Botswana, showing camps and lodges
► Detailed map of the Chobe National Park and its boundaries
► Detailed map of Moremi and the Okavango Delta

Jun to end-Nov: dry season herds concentrate besides the Chobe and Okavango rivers.

Early-Dec: The rains starts: the herds begin their journey to the open interior of Botswana.

Dec: the herds travel in very directly to their wet-season feeding grounds - although...

Some of the zebras from Chobe stop over temporarily, en route, at Seloko Plain.

By early Jan: most of the zebra herds have reached Makgadikgadi and Nxai areas.

Jan: zebras which stopped over at Seloko Pan, make the final move to the plains of Nxai Pan.

Jan to March; zebras enjoy the nutritious grazing in Nxai and Makgadikgadi Pans.

End-Feb: The first herds leave Nxai and Makgadikgadi for the Okavango-Chobe rivers.

By end-March: the last zebra herds are heading north and west.

Mar-Apr their journeys north and west are not as fast or direct as the southward journey.

April to early July zebra herds arrive in the Okavango and Chobe areas.

This particular migration consists of plains zebras (formerly known as Burchell’s zebras), which travel around 1,000km every year. Surprisingly, this is along a relatively linear path, with groups of animals apparently bypassing perfectly good alternative destinations along the way.

This migration has only been discovered so recently because much of the country it goes through is virtually inaccessible, and nobody thought that zebras would ever travel such a long way.

The zebras studied in this first research on this migration stay in the floodplains of the Chobe River and its surroundings (in both Namibia and Botswana) during the dry season: July, August, September, October and perhaps early November.

In this part of the world, the annual rains start around the end-November, or the beginning of December. However, the time at which the zebra depart from this area appears to be related to the arrival of rainfall in the Nxai Pan area – some 250km to the south. When it rains in Nxai, the zebra start moving southwards. Most of the zebra travel in a direct straight line to Nxai Pan, although some stop over temporarily at Seloko Plain before continuing on to Nxai Pan.

Their journey covers about 250km, and typically takes them 14-20 days. However, some individuals don’t travel so directly, and they might take more than 30 days to cover up to about 400km. That means that the round-trip, straight-line migration distance is the longest distance covered by any African land migration, longer than even the famous Serengeti migration in Tanzania and Kenya.

The study indicates that these animals stay for around 80 days in the Nxai Pan National Park – typically during December, January and February. They mostly stay in the pan itself, but some also explore the surrounding grasslands.

The zebras then start their return journey at the end of February or in early March. Surprisingly, the return route isn’t usually as direct or quick as the southward journey. Most of the zebras take around 80 days to return to the northern riverfront area of Chobe National Pak, and typically travel about 500-800km to get there.

Depending on the return route, the zebra arrive around the Chobe Riverfront area in April, May, June or even early July, where they stay until around December – before starting their journey again.

In recent years, Botswana has again started to host another smaller zebra migration, which travels a similar distance at a similar time.

Anecdotal evidences from the first half of the Twentieth Century points to the existence of a zebra migration covering about 250km from the south-eastern Okavango Delta to the grasslands of the Makgadikgadi Pan National Park.

However, in the 1950s and 60s, Botswana put up a series of extensive veterinary fences. These were erected in response to the EU’s insistence that Botswana must have an effective strategy for combatting and controlling outbreaks of foot-and-mouth disease in the national herd.

These fences stretched for hundreds of kilometres; effectively partitioning the country. So from about 1968, the route for this migration was blocked by fences: no zebra could migrate.

It wasn’t until around 2004, these fences were removed.

It’s worth noting here that the average age for a zebra in the wild is about 12 years. Foals born in 1968 would typically live until around 1980; none would still be alive in 2004. So no living zebra could possibly remember this route.

However, within three years of the fence being removed, some of the zebras from the south-eastern Okavango Delta started to migrate again.

Related to the rainfalls in the Makgadikgadi Pan National Park, which usually start around the end of November and early December, the zebras start their journey. The migration leaves the Okavango and reaches the lush Makgadikgadi grasslands after a few weeks, having covered about 250km. The animals stay in the Makgadikgadi Pan National Park for about two and half months before they return back to the Okavango Delta in March. Then they’ll typically stay there during the dry season: July, August, September, October and perhaps early November.

Studies suggest that the zebras migrate to the Makgadikgadi National Park because the grasses have a higher content of protein and minerals than the ones in the Okavango Delta.

Surprisingly only 55% of the zebras actually migrate to the Makgadikgadi, with about 45% staying in the Okavango area for the whole year. The scientist don’t yet know why some stay and the others migrate.

► The Serengeti wildebeest migration, between Tanzania and Kenya.

Our main sources for the information on this page are: