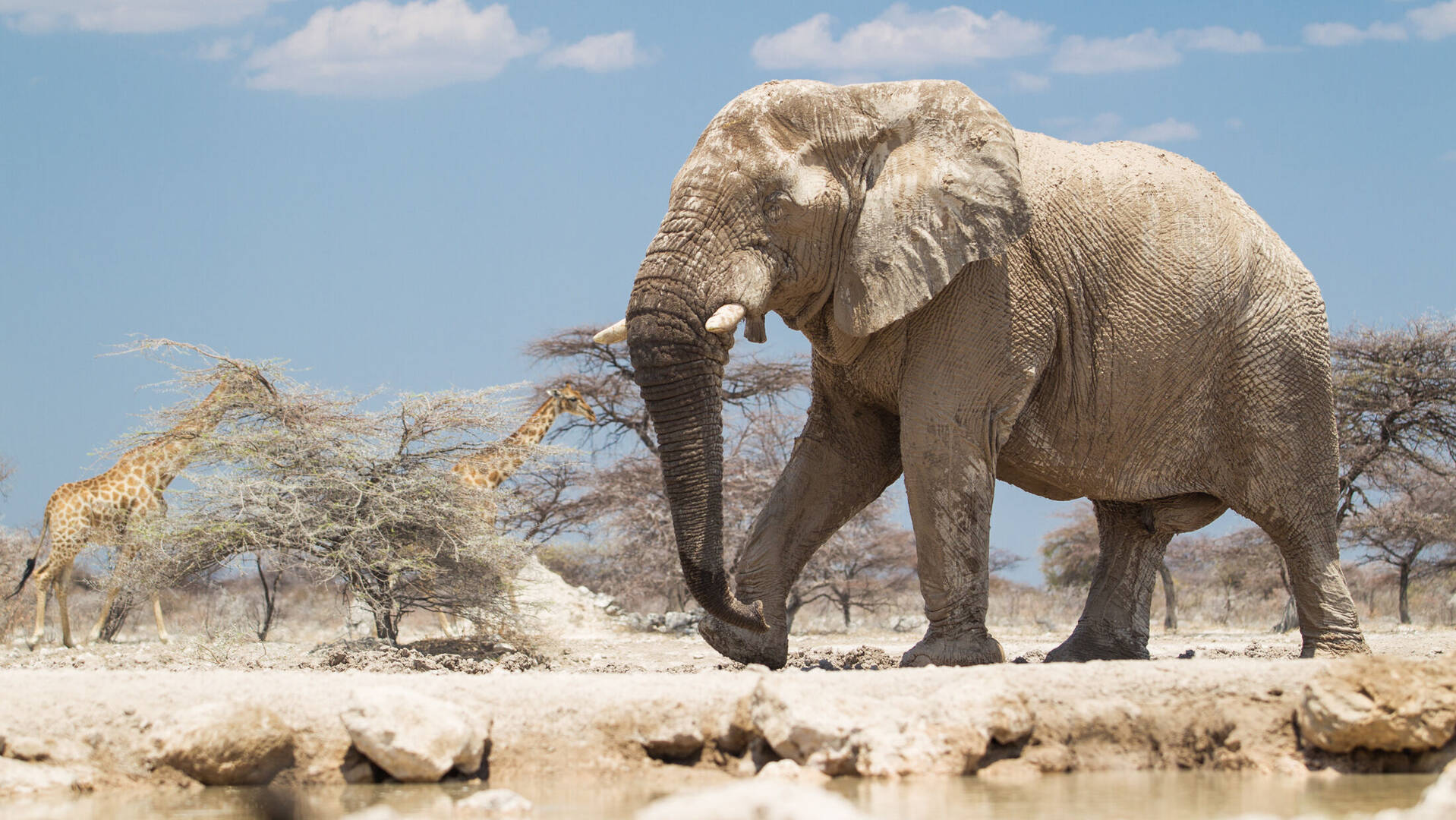 Namibia's wildlife is fascinating, and this is a key reason for many travellers to visit this vast country. Below is a little information on Namibia's giant inhabitants, including African elephant, black & white rhino, hippo and giraffe – concentrating on Namibia-specific aspects. Most of the comments are taken from the Bradt guide to Namibia, which is written by Chris, one of our experts.

Loxodonta Africana Shoulder height 2.3–3.4m. Weight up to 6,000kg.
The world's largest land animal, the African elephant is intelligent, social and often very entertaining to watch. Elephants are widespread and common in habitats ranging from desert to rainforest. In Namibia they are common in the Caprivi Strip and Etosha National Park, and in Kalahari areas around Khaudum.
Until about 50 years ago Etosha's elephants used to migrate, spending the wetter parts of the year in the Kaokoveld and the drier months nearer to Etosha's permanent waterholes. Etosha's boundary fence has stopped that. However, the herds still tend to head to the hills of western Etosha during the rains, returning to the pan several months later as the bush dries out. Every year a few break out of the park's elaborate fences.
The isolated population which frequents the river valleys of the Kaokoveld are commonly known as 'desert elephants' – though desert-adapted might be a more accurate term. These family groups have learnt where the rivers and waterholes are, probably from their elders, and can navigate through the Kaokoveld's mountains and dunes to find water. After several decades of persecution by humans, these elephants are now (understandably) noted for their aggression. Even visitors in sturdy vehicles should treat them with exceptional respect.

Diceros bicornis Shoulder height 160cm. Weight 1,000kg.
This is the more widespread of Africa's two rhino species, an imposing and rather temperamental creature. It has been poached to extinction in most of its former range, but still occurs in very low numbers in many southern African reserves; Namibia offers its best chance of long-term survival – thanks in no small measure to the work of Namibia's Save the Rhino Trust.
Black rhinos exploit a wide range of habitats from dense woodlands and bush, through to the very open hillsides of northern Damaraland. Often (and descriptively) referred to as the hook-lipped rhino, the black rhino is adapted to browse. Over its range it utilises hundreds of different plants, though local populations are often more specific in their diet: in the Kaokoveld, for example, Euphorbia damarana is a great favourite.
Black rhinos are generally solitary animals and can survive without drinking for 4–5 days. However, they will drink daily if they can, and individuals often meet at waterholes – as visitors to the floodlit waterholes at Okaukuejo and Halali will usually see to their delight. They are often territorial and have very regular patterns of movement, which make them an easy target for poachers. Black rhinos can be very aggressive when disturbed and will charge with minimal provocation. Their hearing and sense of smell is acute, whilst their eyesight is poor (so they often miss if you keep a low profile and don't move).

Ceratotherium simum Shoulder height 180cm. Weight 1,500–2,000kg.
No paler in colour than the black rhino – the 'white' derives from the Afrikaans weit (wide) and refers to its flattened mouth, an ideal shape for cropping grass. This is the best way to tell the two rhino species apart, since the mouth of the black rhino, a browser in most parts of its range, is more rounded with a hooked upper lip.
Aside from a relic population of some 30 animals in the northern Congo, the white rhino is now restricted to southern African reserves. They were reintroduced to Waterberg years ago, and about a dozen have recently been introduced back into Etosha – where they seem to frequent the areas between Namutoni and Springbokfontein waterhole. Unlike their smaller cousins, white rhino are generally placid grazing animals which are very rarely aggressive. They prefer open grassy plains and are often seen in small groups.

This is what most travellers want to see when they come to Namibia - large herbivores...

...including the worlds largest land animal, the African elephant...

...or in large rivers and lakes.

Zebra are widespread throughout most of Namibia...

...whilst the worlds tallest mammal, the Giraffe, can be spotted in the northern parts.

Hippopotamus amphibious Shoulder height 150cm. Weight 2,000kg.
Characteristic of Africa's large rivers and lakes, this large, lumbering animal spends most of the day submerged but emerges at night to graze. Strongly territorial, herds of ten or more animals are presided over by a dominant male who will readily defend his patriarchy to the death. Hippos are abundant in most protected rivers and water bodies, and they are still quite common outside of reserves, where they are widely credited with killing more people than any other African mammal.
In Namibia they occur only in the great rivers of the Caprivi Strip, and occasionally in the Kunene River, at the north end of the Skeleton Coast / Kaokoland. Otherwise you won't generally see them.

Syncerus caffer Shoulder height 140cm. Weight 700kg.
Frequently and erroneously referred to as a water buffalo (an Asian species), the Cape, or African, buffalo is a distinctive, highly social ox-like animal that lives as part of a herd. It prefers well-watered savannah, though also occurs in forested areas. Common and widespread in sub-Saharan Africa, in Namibia it is limited to the Caprivi Strip, largely by the absence of sufficient water in the rest of the country.

Giraffa camelopardis Shoulder height 250–350cm. Weight 1,000–1,400kg.
The world's tallest and longest-necked land animal, a fully grown giraffe can measure up to 5.5m high. Quite unmistakable, the giraffe lives in loosely structured herds of up to 15 head, though herd members often disperse and then they are seen singly or in smaller groups.
Formerly distributed throughout East and southern Africa, these great browsers are found in the north of Namibia, from northern Damaraland and the Skeleton Coast, to the Caprivi Strip. Etosha National Park has a thriving population, many of which are very relaxed with cars and allow visitors in vehicles to approach very closely.

Equus burchelli Shoulder height 130cm. Weight 300–340kg.
Also known as Burchell's or plains zebra, this attractive striped horse is common and widespread throughout most of East and southern Africa, where it is often seen in large herds alongside wildebeest. It is common in most conservation areas from northern South Africa, Namibia and Botswana all the way up to the southeast of Ethiopia. Southern races, including those in Namibia, have paler brownish 'shadow stripes' between the bold black stripes that are present in all races.

Equus grevyi hartmannae
The Hartmann's mountain zebra is confined to Namibia's western escarpment and the plains nearby. It is very closely related to the Cape mountain zebra which occurs in South Africa. Mountain zebra have a slightly lighter frame than the Burchell's, their underparts are not striped, the striping on their legs extends all the way to their hooves, and they have a dewlap which the Burchell's lack.
They occur from the conservation area around the Fish River Canyon to the Naukluft Mountains, and the Hartmann Valley in the Kaokoveld, and have been introduced on to several private reserves away from the escarpment area.

Phacochoreus africanus Shoulder height 60–70cm. Weight up to 100kg.
This widespread and often conspicuously abundant resident of the African savannah is grey in colour with a thin covering of hairs, wart-like bumps on its face, and rather large upward curving tusks. Africa's only diurnal swine, the warthog is often seen in family groups, trotting around with its tail raised stiffly (a diagnostic trait) and a determinedly nonchalant air.
They occur everywhere in Namibia apart from the far south and the western desert areas, although I have often seen them grazing, on bended knee, where the C36 cuts through the Namib-Naukluft National Park.

Potomochoerus larvatus
Bulkier, hairier and more brown, the bushpig is only known to occur in Namibia in the Caprivi Strip. It is very rarely seen due to its nocturnal habits and preference for dense vegetation.