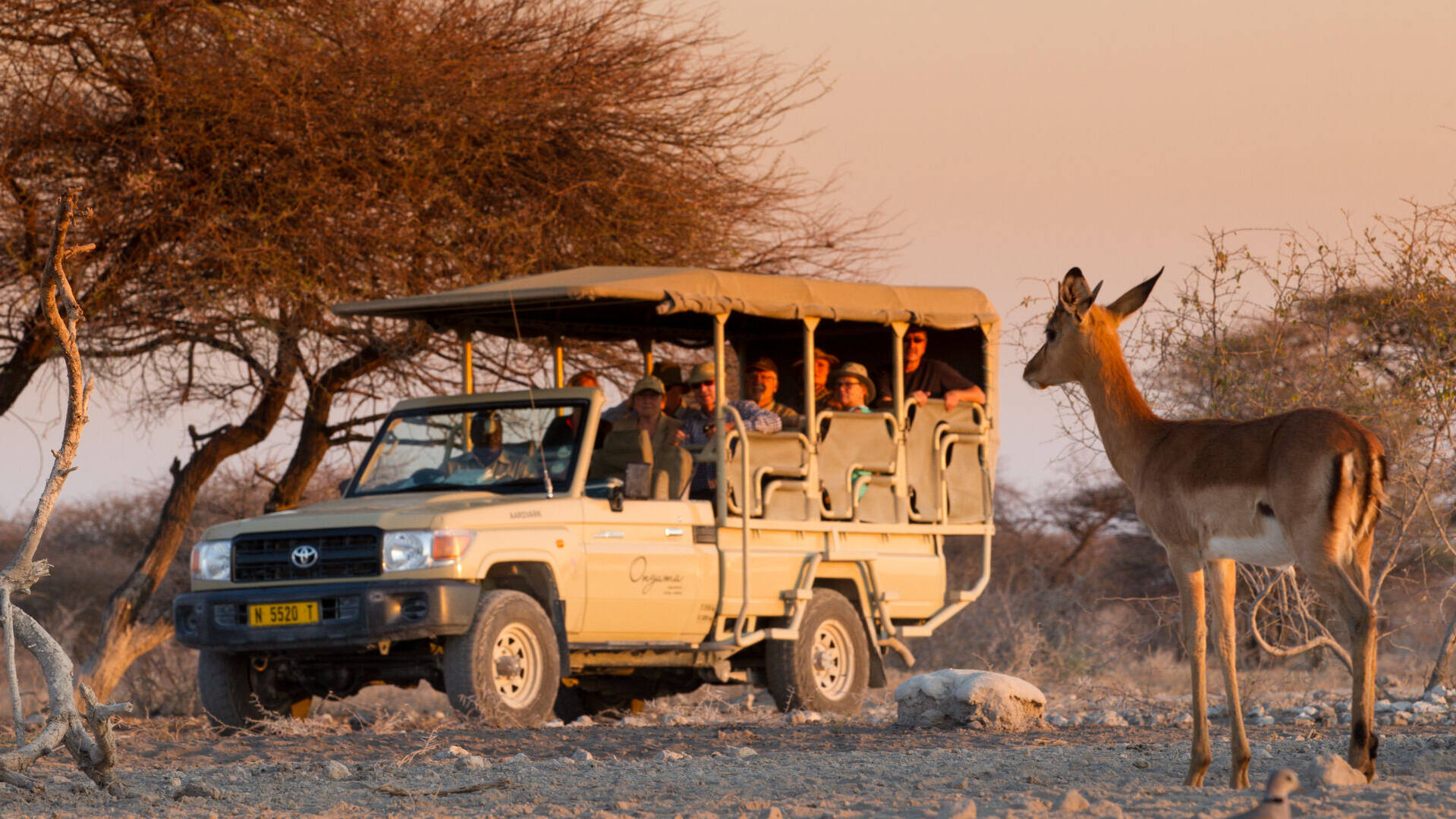 For many visitors, a key reason to travel to Namibia is the country's outstanding wildlife. Below you'll find a list of some of Namibia's medium and small antelope – each with a short description, highlighting aspects that are specific to Namibia. Most of the comments are taken from the Bradt guide to Namibia, which is written by one of our team members.

Tragelaphus scriptus Shoulder height 70–80cm. Weight 30–45kg.
This attractive antelope, a member of the same genus as the kudu, is widespread throughout Africa and shows great regional variation in its colouring. It occurs in forest and riverine woodland, where it is normally seen singly or in pairs. The male is dark brown or chestnut, while the much smaller female is generally a pale reddish brown. The male has relatively small, straight horns and both sexes are marked with white spots and sometimes stripes, though the stripes are often indistinct.
In Namibia they have a very limited distribution around the Okavango River in Mahango National Park, and beside the Chobe and Kwando rivers on the eastern side of the Caprivi Strip.

Aepeceros melampus Shoulder height 90cm. Weight 45kg.
This slender, handsome antelope is superficially similar to the springbok, but in fact belongs to its own separate family. Chestnut in colour, and lighter underneath than above, the impala has diagnostic black and white stripes running down its rump and tail, and the male has large lyre-shaped horns. The impala is one of the most widespread and successful antelope species in East and southern Africa, although it is absent from much of Namibia.
However, a separate subspecies, the black-faced impala A. m. petersi, occurs in Etosha National Park, the Kaokovelt and southern Angola. This is almost identical to the normal impala, and distinguished only by extra black stripes on its face, including a prominent one down the front of its nose.

Antidorcas marsupilis Shoulder height 60cm. Weight 20–25kg.
Springbok are graceful, relatively small antelope – members of the gazelle family – which generally occur in large herds. They have finely marked short coats: fawn-brown upper parts and a white belly, separated by a dark brown band. Springbok occur throughout Namibia; they are often the most common small antelope. They can be seen by the thousand in Etosha.
They favour dry, open country, preferring open plains or savannah, and avoiding thick woodlands and mountains. They can subsist without water for long periods, if there is moisture in the plants they graze or browse; I have even seen springbok amongst the dunes at Sossusvlei on occasions, in the Namib-Naukluft Park.

Medium and small antelope in Namibia include bushbuck, marked with white spots and stripes...

...as well as slender, chestnut-coloured impala...

...and red lechwe, which can be found in moist, open environments.

Redunca arundinum Shoulder height 80–90cm. Weight 45–65kg.
Sometimes referred to as the southern reedbuck (as distinct from mountain and Bohor reedbucks, found further east), these delicate antelope are uniformly fawn or grey in colour, and lighter below than above. They are generally found in reedbeds and tall grasslands, often beside rivers, and are easily identified by their loud, whistling alarm call and distinctive bounding running style. In Namibia they occur only on the Caprivi Strip and a few riverine areas in the far north.

Oreotragus oreotragus Shoulder height 60cm. Weight 13kg.
The klipspringer is a strongly built little antelope, normally seen in pairs, and easily identified by its dark, bristly grey-yellow coat, slightly speckled appearance and unique habitat preference. Klipspringer means 'rockjumper' in Afrikaans and it is an apt name for an antelope which occurs exclusively in mountainous areas and rocky outcrops from Cape Town to the Red Sea.
They are common throughout Namibia, wherever rocky hills or kopjes are found – which means most of the central highlands and western escarpment, but not in the far north or the Caprivi Strip. Good places to look for klipspringers include Erongo Wilderness Lodge, Damaraland Camp, Huab Lodge and Etendeka.

Kobus leche Shoulder height 90–100cm. Weight 80–100kg.
Otherwise known as the red lechwe, this sturdy, shaggy antelope has a reddish coat and beautiful lyre-shaped horns. They are usually found only in moist, open environments and in Namibia they are found only beside the great rivers of the Caprivi Strip.
Lechwe need dry land on which to rest, but otherwise will spend much of their time grazing on grasses and sedges, standing in water if necessary. Their hooves are splayed, adapted to bounding through their muddy environment when fleeing from the lion, hyena and wild dog that hunt them.

Raphicerus cempestris Shoulder height 50cm. Weight 11kg.
This rather nondescript small antelope has red-brown upper parts and clear white underparts, and the male has short straight horns. It is probably the most commonly observed small antelope; if you see a small antelope fleeing from you across farmland in Namibia, it is likely to be a steenbok. Like most other small antelopes, the steenbok is normally encountered singly or in pairs and tends to 'freeze' when disturbed, before taking flight.

Raphicerus sharpie
Sharpe's grysbok is similar in size and appearance, though it has a distinctive white-flecked coat. It occurs alongside the steenbok in the far eastern reaches of the Caprivi Strip, but is almost entirely nocturnal in its habits and so very seldom seen.

Ourebia ourebi
The Oribi is a widespread but very uncommon antelope, which is usually found only in large, open stretches of grassland. It looks much like a steenbok but stands about 10cm higher at the shoulder and has an altogether more upright bearing. In Namibia you have a chance of seeing these only on the Caprivi Strip, and you'll need to look hard.

Madoqua kirki
The Damara dik-dik occurs in central-north Namibia, Etosha and the Kaokoland, as well as parts of East Africa where it is known as Kirk's dik-dik. It is Namibia's smallest antelope; easily identified from steenbok by its much smaller size. It is adapted to arid areas and prefers a mixture of bushes and spare grassland cover.
Damara dik-diks are particularly common in Etosha National Park, and will often sit motionless beside the road whilst they are passed by without ever being seen. They are active during the cooler hours of the day as well as the night and are almost exclusively browsers.

Sylvicapra grimmia Shoulder height 50cm. Weight 20kg.
This anomalous duiker holds itself more like a steenbok or grysbok and is the only member of its (large) family to occur outside of forests. Generally grey in colour, the common duiker can most easily be separated from other small antelopes by the black tuft of hair that sticks up between its horns.
It occurs throughout Namibia, everywhere except the Namib Desert. Common duikers tolerate most habitats except for true forest and very open country, and are tolerant of nearby human settlements. They are opportunist feeders, taking fruit, seeds, and leaves, as well as crops, small reptiles and amphibians.