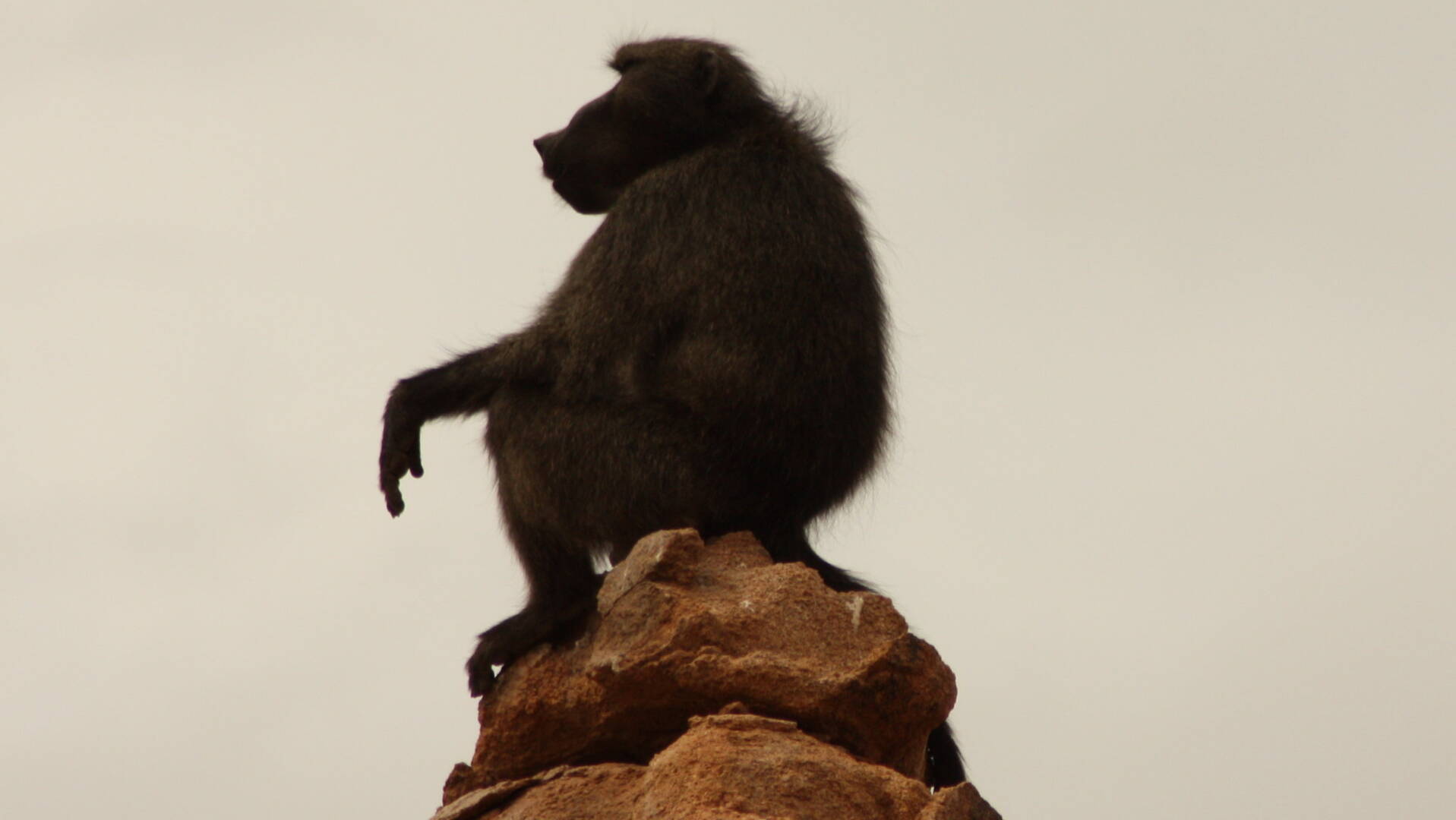 For many visitors, a key reason to travel to Namibia is the country's fascinating wildlife. Below you'll find short descriptions of Namibia's primates – concentrating on aspects that are specific to this country. Many comments are taken from the Bradt guide to Namibia, which is researched and written by Chris of the Expert Africa team.

Papio cynocaphalus ursinus Shoulder height 50–75cm. Weight 25–45kg.
This powerful terrestrial primate, distinguished from any other monkey by its much larger size, inverted 'U' shaped tail and distinctive dog-like head, is fascinating to watch from a behavioural perspective. It lives in large troops which boast a complex, rigid social structure characterised by a matriarchal lineage and plenty of inter-troop movement by males seeking social dominance. Omnivorous and at home in almost any habitat, the baboon is the most widespread primate in Africa, frequently seen in most game reserves.
There are three African races, of which the chacma baboon is the only one occurring in Namibia – and you'll find this in all but the driest areas of the country. With a highly organised defence system, the only predator that seriously affects them is the leopard, which will try to pick them off at night, whilst they are roosting in trees or cliffs.

Namibia is not a primate destination, but some species...

...including the chacma baboon, can be spotted in certain parts of the country.

Cercopithecus aethiops Length (excluding tail) 40–55cm. Weight 4–6kg.
Also known as the green or grivet monkey, the vervet is probably the world's most numerous monkey and certainly the most common and widespread representative of the Cercopithecus guenons, a taxonomically controversial genus associated with African forests. An atypical guenon in that it inhabits savannah and woodland, rather than true forest, the vervet spends a high proportion of its time on the ground.
The vervet's light grey coat, black face and white forehead band are distinctive – as are the male's garish blue genitals. The only animal that is even remotely similar is the baboon, which is much larger and heavier.
Vervets live in troops averaging about 25 animals. They are active during the day and roost in trees at night. They eat mainly fruit and vegetables, though are opportunistic and will take insects and young birds, and even raid tents at campsites (usually where ill-informed visitors have previously tempted them into human contact by offering food).
In Namibia, verevets are found only around the narrow belts of woodland beside the Orange and Kunene rivers, and in the lush areas of Mahango and the Caprivi Strip.

Galago senegalensis Length (without tail) 17cm. Weight 150g.
The lesser bushbaby is the most widespread and common member of a group of small and generally indistinguishable nocturnal primates, distantly related to the lemurs of Madagascar.
More often heard than seen, the lesser bushbaby is nocturnal but can sometimes be picked out by tracing a cry to a tree and shining a torch into the branches; its eyes reflect as two red dots. These eyes are designed to function in what we would describe as total darkness, and they feed on insects – some of which are caught in the air by jumping – and also eating sap from trees, especially acacia gum.
They inhabit wooded areas, and prefer acacia trees or riverine forests. I remember being startled whilst lighting a braai at Halali Camp, in Etosha, by a small family of bushbabies. They raced through the trees above us, bouncing from branch to branch whilst chattering and screaming out of all proportion to their size.
In Namibia they occur throughout the north, from northern Kaokoland and Etosha to Khaudum and the Caprivi Strip.