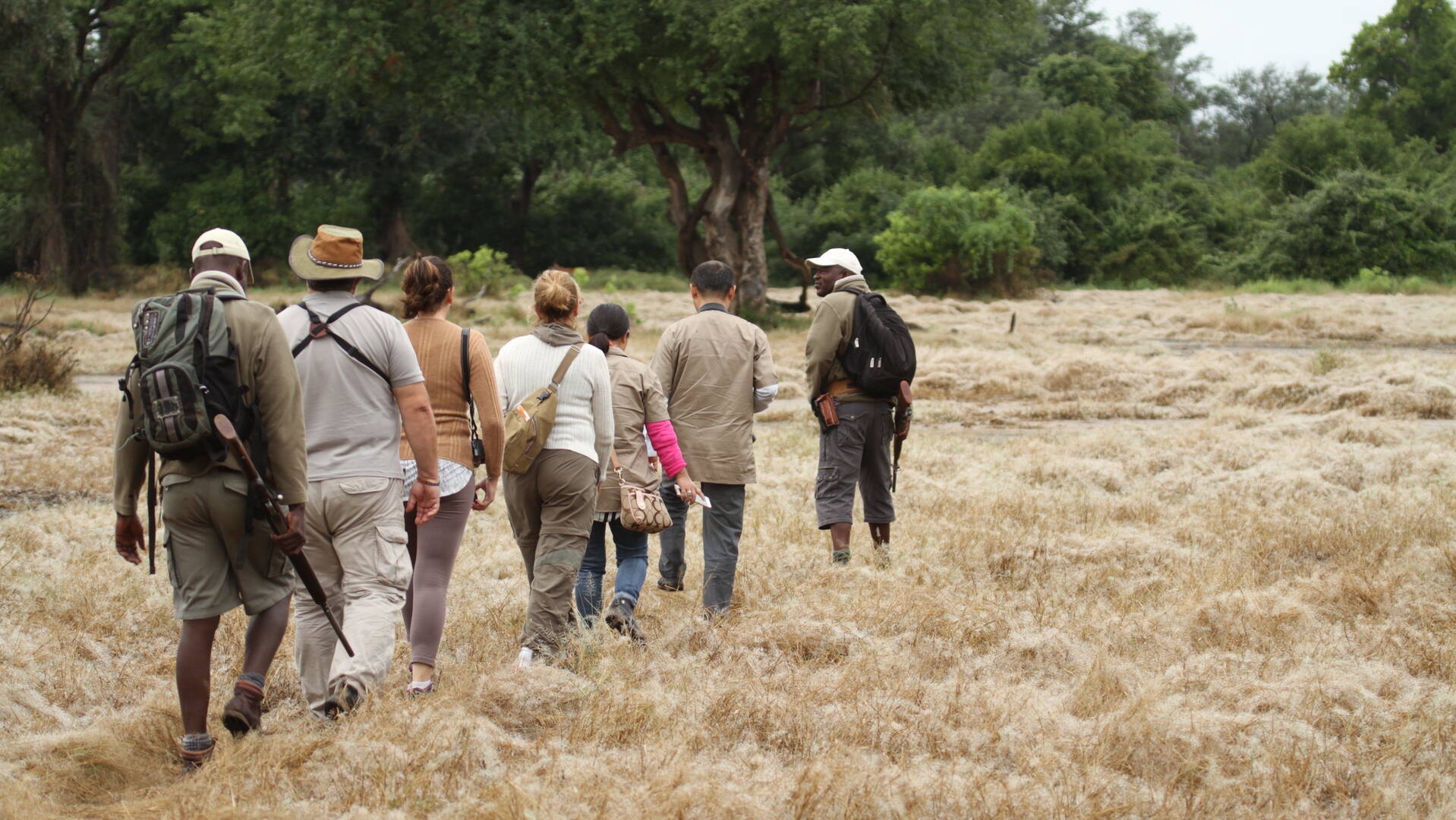 Zimbabwe’s safari guides are amongst the best safari guides in Africa. Not least because that they have to proceed a four-year certification process; this is one of the most difficult guide license procedures anywhere in Africa.

Firstly they have to pass the Learner’s theory examination where their knowledge of the environment, the ecology, vegetation, geography, birds and wildlife, first aid, firearms and ballistics, as well as environmental and tourism laws are tested.

After that, the learner safari guide has to spend minimum of two years working under the tutorship of a safari guide with a Full License. Through this, learner guides will gain extensive experience of working in the bush and guiding clients through the National Parks (including: walking safaris, game drives and usually hunting safaris).

Through such intensive training, Zimbabwe’s safari guides learn to lead guests safely through the bush, even approaching wildlife more closely than most other guides would. Have a look through some of the crème de la crème of Zimbabwe safari guides, below – then contact us if you’d like us to include time with one of them in your next safari.

Nick Murray was born in 1967, went to high school in Zimbabwe and got his BSc in wildlife management and zoology at the University of Natal. He had an interest in wildlife since his early years but his guiding career really started in1988, when he became a learner safari guide in Fothergill Island, Matusadona National Park and achieved his Learner Guide license two years later. 1991 Nick obtained the Professional Guide License and became the manager of Cawston Block, a private game reserve in Zimbabwe. During the next three years he gained experience in wildlife management, ostrich farming, cattle ranching, fencing and building. In addition he got his dangerous drugs license in 1992 and renews the license every five years. He used it for game capture and translocations of the wildlife. Nowadays it is necessary for the wild dog research program and to help treated animals (when they are treated by a snare or another human interfence).

Between 1995-1998 he worked for various camps in Kariba-Matusadona, Hwange National Park, Mana Pools National Parks , Chizarira and Gonarezhou as a freelance safari guide.

In 2002 he married Desiree, who is also a licensed professional safari guide (and canoe guide) in Zimbabwe; in fact she was the best candidate on the proficiency exam for professional guides in 1997, being the first woman to ever received the award. Together with Desiree, he has spent a lot of time canoeing Zambezi River since 1997 and Nick earned his Canoe Guides License just one year later. Nick had already guided in many of the wildlife areas and national Parks in Zimbabwe and has additional experience in Tanzania, Namibia, Mozambique, South Africa Zambia and Botswana.

Nowadays Nick and Desiree run safaris mostly in Mana Pools National Parks from their main base at Vundu Camp. These include running Little Vundu and Ruwesi Canoe Trails; extended safaris which set up fly-camps in the more offbeat corners of Mana Pools, like Chitake Springs; and safari extensions to Matusadona National Park, which focus on tracking black rhino.

Furthermore Nick is studying the wild-dogs in Mana Pools, in cooperation with the Painted Dog Conservation group, to get his Masters Degree.

Together as a guiding team, with his wife, they create extraordinary safari experiences, as one of the Expert Africa team members learned when Nick guided him to crawl remarkably close to a pack of wild dogs.

Families with children respond particularly well to Nick and Desiree’s experience with their own family, as they have two young children themselves. Desiree usually helps to run the safari business from town, but comes into camp with the children for most school holidays.

Paul Hubbard was born in 1983 and raised on a farm near Bulawayo, Zimbabwe. Since then he has lived all over the country, both in towns and in the bush, which he tells us he much prefers. Paul’s long-standing interests in Zimbabwean culture, history and archaeology have led to multiple degrees in archaeology, as well as the coveted Zimbabwe Professional Guides Licence. Drawing on these interests, he offers a range of fascinating tours that focus on subjects as diverse as prehistoric rock art, colonial history and the medieval empires of southern Africa – all backed by a wealth of personal experience.

The combination of a deep knowledge and understanding of his subjects with an infectious enthusiasm has led to many accolades. Having been ranked by Vanity Fair as one of their Top 10 Guides in Africa, in 2013 he was chosen by Condé Nast Traveller as one of the 25 Best Safari Guides. More recently, in December 2018, the Financial Times stated that Paul is "widely regarded as one of the best historian-guides in Zimbabwe”.

When he’s not guiding, Paul continue to delve into archaeological and historical research, and serves on a number of local committees and research groups. He has published several papers, book reviews and booklets, as well as co-writing “Zimbabwe: a Simple History" with Mark Igoe, and the 4th edition of Zimbabwe: the Bradt Travel Guide, for publication in late 2019. Should there be time to spare, Paul takes time out by visiting obscure archaeological sites in Zimbabwe and beyond with his friends – always accompanied by a trusty GPS, camera and notebook, of course.

Dave Carson was born 1971 in Harare, Zimbabwe, but he grew up in Bulawayo.
After he finished High school at Capricon High in South Africa, he went to a farm in Matebeleland (near Hwange National Park) to gain some work experience. Dave’s work at the farm was short-lived, but he was fortunate that Ron White (of the White family who owned the ‘Wild Horizons’ group of camps) took him on to help build Jijima Camp, which was in the forest reserve beside Hwange National Park. When building the camp was finished, Dave was offered a position as a learner guide; he took this chance like a shot. In the coming years, he worked first as a safari guide for two of Wild Horizons’ camps, Jijima and Imbabala Camp.

In 1995 he finally earned is full Professional Guiding License, and swiftly started company on his own, offering mobile camping. It was called Kazuma Trails – after a small but very special park, Kazuma Pan National Park, which lies beside the Botswana border – south of Victoria Falls and north of Hwange. However such mobile companies take a long time to grow and in its early years Dave continued to so lots of freelance safari guiding, mainly in Matusadona, Chizarira and Hwange National Park. During this period he worked with a wide variety of camps and operations including Vundu Camp, Ivan Carter Safaris and The Hide Safari Lodge.

One of his projects during this time was an expedition, paddling from the source of Zambezi River, in north-west Zambia, to the Indian Ocean in 1998.
Since 2002 he has focused more on his mobile safari operation – and as visitor numbers to Zimbabwe dipped substantially, this led him to organize and guide many safari trips through Botswana. In 2003 he got married and nowadays he still runs his own mobile operation, Kazuma Trails; he has recently become involved helping to build and run a new camp in Hwange, Camp Hwange – in the Shumba Pans area. When not guiding, Dave lives in Victoria Falls, and is closely involved with various projects to build roads, pump water or help protect Zimbabwe’s national parks in other ways.

Spike Williamson became a professional safari guide in Zimbabwe in 1988, but his passion for African wildlife had its origin further in the past. Born and raised in Hwange National Park, Zimbabwe, he grew up with his father, Basil Williamson, who was an ecologist. Thanks to this, and the travels that he did during his school holidays with his brothers, he had extensive experience of the bush and its wildlife when he was young. Birds were always a particular interest for him.

Spike got his first guiding job in Hwange Safari Lodge after he left school, and this is where he started to learn how to guide professionally. A few years later (1988) he became one of the youngest men to qualify for a Zimbabwean Professional Guide’s license.

Since then, Spike has had many roles in the safari industry. Initially he guided for various tented safari camps through Zimbabwe and became the manager of Water Wilderness Camp. After that, he managed a private safari area in the south-east of Zimbabwe – and soon became of one the elite examiners for the board which awards Zimbabwe’s professional guide licenses.

When numbers of travellers to Zimbabwe dropped dramatically, Spike moved on to lead walking safaris in East-Africa. There Tanzania really caught his imagination, and soon he had a role to direct the building and renovation of Beho Beho. He went on to manage the camp for five years, laying down the standard for what is one of Africa’s best safari camps today.

Since then, Spike Williamson has continued to guide various private safaris across Africa, and he combines this with building camps in Ethiopia and Northern Kenya for Ardan Risk & Support Services.
Spikes is personable, humorous and very calm in the tightest of spots; one guides who learned under Spike spoke of him as having amazing resilience and endurance in the bush. He has a great interest in falconry, is an excellent birder and seems to have always retained a reverence towards nature and a real fascination with it.