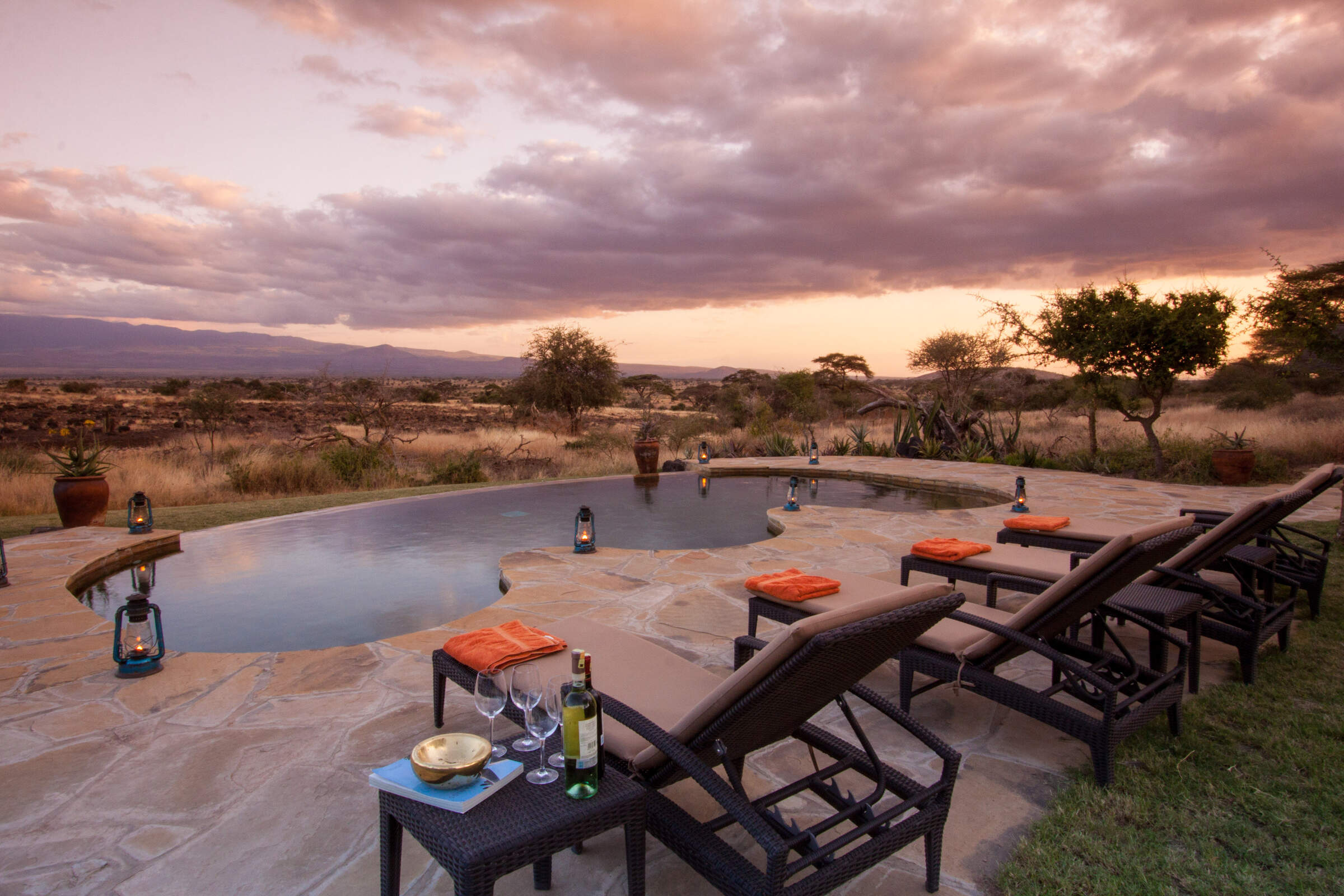 14 independent comments and wildlife information from our travellers who have visited Tortilis Camp and kindly agreed to share their thoughts. They do not necessarily represent the views of Expert Africa

3 nights Arrived 29 Jan 2020
"Liked my tent, the grounds and the setting. The highlight of my stay was having Joseph as my guide, he was totally brilliant and a lovely man. Kibeki was a great waiter. The staff were all very pleasant and helpful." See all these reviews: 7n in Kenya
Experience Report
Overall Rating:
Good
Location:
Excellent
Service:
Good
Activities:
Good
Rooms:
Good
Food:
Good
Facilities:
Good
Sightings Report

"A Perfect Stay with a perfect view"

3 nights Arrived 9 Nov 2019
"This was a perfect organuzed stay with a incredible view of the Kilimandscharo, every day game drives in my own car with my own driver, best food ever and the best managmant couple I ever met. We celebrated the 30th anuary of falling down the wall and for me it was a very emotional evening." See all these reviews: 9n in Kenya
Experience Report
Overall Rating:
Excellent
Location:
Excellent
Service:
Excellent
Activities:
Excellent
Rooms:
Excellent
Food:
Excellent
Facilities:
Excellent
Sightings Report

3 nights Arrived 24 Oct 2019
"This camp bears all the hallmarks of an establishment that treats guests as clients which could not be said of the other two camps in Meru and Masai Mara.

The hosts based on our experience do not engage with the guests other that on a superficial level. On our last night when we were enjoying supper we were abruptly informed to clear our room by 10:00 am and comeback early from our last game drive. We were told this is camp policy. It is also camp policy to restrict sundowners until the last night!!

On a positive note our guide was very good and we had some excellent opportunities bird watching. In addition the Elephant interactions and sightings were excellent and the best we have ever experienced in 12 years of travelling to Africa." See all these reviews: 10n in Kenya
Experience Report
Overall Rating:
Average
Location:
Excellent
Service:
Average
Activities:
Good
Rooms:
Good
Food:
Good
Facilities:
Average
Sightings Report

"In the shadow of Kilimanjaro"

3 nights Arrived 3 Oct 2019
"Only shortfall of this camp is the long steep incline from rooms to central amenities. Motor transport was provided for me to and from our room but this may not have been practical for others located in area with no road access." See all these reviews: 14n in Kenya
Experience Report
Overall Rating:
Excellent
Location:
Excellent
Service:
Excellent
Activities:
Excellent
Rooms:
Excellent
Food:
Excellent
Facilities:
Excellent
Sightings Report

3 nights Arrived 19 Sep 2019
"Nothing can prepare you for the view that Tortilis camp offers. The dining area faces Kilimanjaro and we were lucky to be able to see the mountain every day (it wasn't shrouded in mist!).

There is a man made watering hole which attracts animals. Our tent was vast with a very comfortable bed. No view of the mountain though.

The food was satisfactory. Usually soup and then a buffet.

3 nights Arrived 6 Feb 2019
"Our principal reason for wanting to visit Amboseli was to see elephants, and our wish was more than fulfilled - though it was also great just to sit quietly and take in the sheer numbers and variety of birds which vied for attention with them in the swampy areas. We also enjoyed the sight of hundreds of flamingoes which was a really stunning spectacle. It was good to have the option of game drives in the Kitirua conservancy though to be honest I think we had better luck game viewing in the park itself, which luckily did not seem as busy with other visitors as we thought it might be.

Unfortunately Kilimanjaro remained pretty well shrouded in cloud for most of our stay, but it was obvious that the view of it from the camp would have been amazing had it been more visible. As well as having a fantastic location, the camp itself was immaculately maintained and the food excellent, though as with Elsa's I think the atmosphere must inevitably be very different in high season when the camp is full. We very much appreciated the charming and understated hosting of Candy and Graeme, and along with our guide Patrick, wanted to express particular thanks to Jackson who not only looked after us so ably at mealtimes but also led us on a very enjoyable bush walk on the last morning of our stay." See all these reviews: 7n in Kenya
Experience Report
Overall Rating:
Excellent
Location:
Excellent
Service:
Excellent
Activities:
Excellent
Rooms:
Excellent
Food:
Excellent
Facilities:
Excellent
Sightings Report

3 nights Arrived 27 Aug 2018
"Loved this place, unfortunately we never got a very good view of Kilimanjaro which I really wanted to see as Peter had climbed this 10 years ago. However wonderful wildlife - and birds - flamingoes were stunning.

Brilliant guide, good hosts, great service from all the staff.

"Respite in the dust"

Breakfast in the bush was a great treat.

"Tortillas Camp – Excellent Base for Amboseli"

2 nights Arrived 10 Oct 2017
"Tortilis Camp has an excellent location on a hillside facing Kilimanjaro and overlooking a small waterhole, just outside the Amboseli park boundary – although this is something of a technicality as there is no noticeable boundary, other than at the entrance to the camp itself. It is a fenced camp, so there are no restrictions on walking around, during daylight or evening hours.

The accommodation, as is fairly typical for tented camps in our experience, comprises a spacious tent pitched on a solid base with a thatched outer roof, incorporating a bathroom at the back, behind the (very comfortable) double bed, and opening onto an outdoor sitting area at the front. There is a good degree of separation and vegetation between tents to provide privacy. From our tent we had views of Kilimanjaro – when it wasn't shrouded in cloud – but we were not able to see the waterhole or anything much of the wildlife that came to visit it. However, up at the main lounge / bar / restaurant area there was a better view and we were able to watch various animals come to drink, including some elephants while we were having lunch, one day!

The food was excellent, with a good range of options. Buffet for breakfast and lunch; à la carte in the evening. One morning's game drive included a bush breakfast, which was very pleasant out on the plane in the shade of a tree, looking at Kilimanjaro before the clouds rolled in. This was also outside of the park boundary, which again was something of a technicality and it certainly did not deter the family of 3 cheetahs that we saw immediately afterwards. (Maybe they fancied one of the cooked-to-order omelettes?)

The activities provided by the camp were morning and evening game drives, which were in an open-sided safari vehicle with a canvas roof for shade. At this time of year most of the park is a dustbowl except for the areas around the lake and marshes, which are what makes Amboseli such a magnet for wildlife – and tourists, although we were not overly aware of too many of those at the various sightings where we stopped to view the wildlife. There were lots of elephants, hippos, buffalo, wildebeest, various antelopes and giraffes, and loads of birds, both waterfowl and other species. We are not mad-keen bird watchers but easily spotted at least 40 different species without trying particularly hard.

Although the water provided by the lake and marshes makes for great wildlife densities at this time of year, there was not a huge variety and predators, in particular, seemed to be difficult to find. We were fortunate to see the cheetahs after our bush breakfast, and the same 3 the following morning as well, as it happened, as they had not moved that far away. We also had two hyena sightings, including a cub which had popped up from its den. However, the variety of birds was extensive and perhaps the one area where our guide could improve his knowledge. We are not expert ornithologists by any means but our experience on previous safaris elsewhere has been that the guides have a pretty good eye and knowledge of what they are looking at – that is why they are safari guides! They may not know everything (who does?) but usually have a good initial idea, with the relevant well-thumbed guidebooks on-hand for confirmation. It was slightly disconcerting, therefore, to have occasions when we would see a bird and appear to have more of an idea about it than our guide. For example: asking what type of bee-eater we were looking at, to be told it was a fly-catcher because the single page quick ID guide said so, was not really very good. (For the record, when we persuaded our guide to look the bird up properly in his guidebook, it was confirmed as a cinnamon chested bee-eater.) In conversation we understood from our guide that he had been working in Amboseli for 20 years; we would expect a slightly better grasp of the local birdlife after all that time.

This last point aside, our guide's general abilities in terms of driving us around safely, knowing the geography of the park and surrounding areas, and looking for and finding animals, were absolutely fine. He also drove us safely all the way to our rendezvous at the Tsavo West gate as part of our transfer at the end of our stay." See all these reviews: 4n in Kenya
Experience Report
Overall Rating:
Excellent
Location:
Excellent
Service:
Excellent
Activities:
Excellent
Rooms:
Excellent
Food:
Excellent
Facilities:
Excellent
Feedback Response
We heard back from the camp, and while they are delighted that these travellers enjoyed their stay on the whole, they accept that this particular guide is not a bird specialist. He was chosen for his extensive geographical knowledge of the area. The camp will be doing some more ornithology training with him to help improve his knowledge. They wanted to emphasise that they take all feedback constructively and use it to continuously improve their guests' experiences.

Campi ya Kanzi is a very well integrated, eco-friendly bush lodge and tented camp on the slopes of the Chyulu Hills in its own, 1000-square-kilometre Maasai conservancy.

Ol Donyo is a luxurious and innovative designer safari lodge with magnificent views and excellent walking, riding and wildlife country in its own private conservancy.