Visits mainly focus on the Developed Area in the north of the park.

Lodges, such as Lion's Bluff, here, are often spectacularly sited.

Dotted with dramatic lava flows and graced by the unique Mzima Springs, Tsavo West has good wildlife and few visitors.

Although Tsavo West and Tsavo East were once a single mega-park, they were separated decades ago, along a line coinciding with the Mombasa highway – and they feel like quite distinct national parks with different eco-systems: the open, flat-to-undulating plains and scattered bush of Tsavo East National Park and the much more wooded, hilly landscapes, dotted with volcanic cones and dramatic, black lava flows, that characterise Tsavo West National Park.

Just as Tsavo East has its core area in the far south, so Tsavo West safaris invariably concentrate on a core part of the park, in the north, known as the Developed Area – a 1,000km² area north of the Tsavo River, with magnificent landscapes and a good network of sand and gravel park roads. This district’s well-watered, volcanic soil supports a good range of woodland and savannah habitats for the full panoply of Kenyan wildlife – although in the hilly bush, the animals can be hard to see.

To the south of Tsavo West, the Lumo Community Wildlife Sanctuary, directly bordering the well-known Taita Hills Game Sanctuary, is one of Kenya’s most successful community conservation initiatives. If you’re interested in Lumo safaris you’ll find there’s just one lodge on the conservancy and that it shares a common border with the Taita Hills Sanctuary. 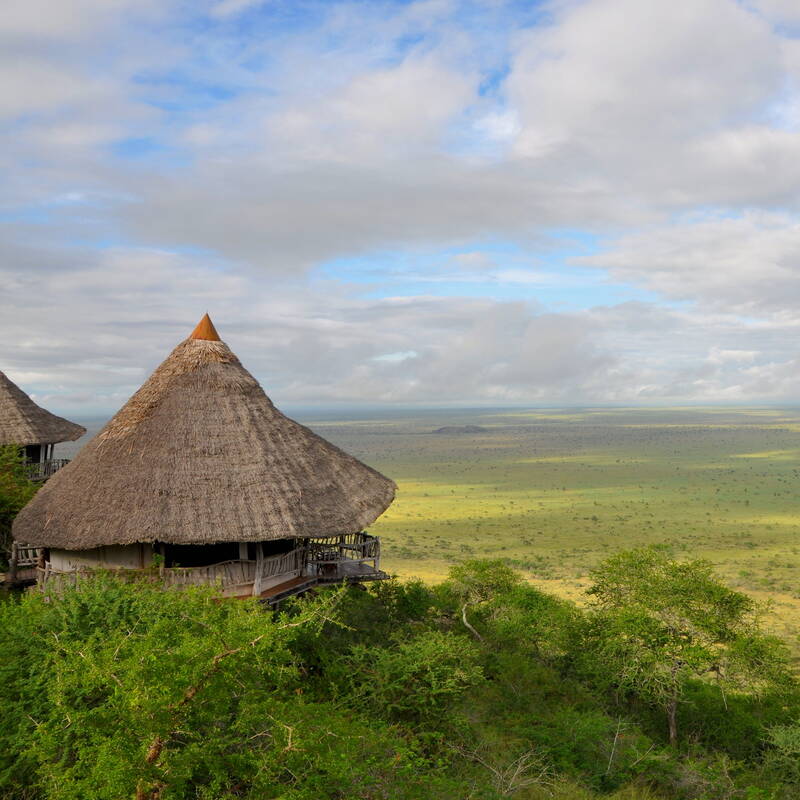 This example of a mid-range Kenya safari and beach trip explores the wildlife of Tsavo West's volcanic plains and woodlands, Tsavo East's immense plains and the white-sand beaches and lush environment of Diani Beach.

Read more about the Elephant Safari

This is their success for sightings in Tsavo West National Park.
Click on a species for more detail. How we work this out.

Choices for where to stay in Tsavo West National Park 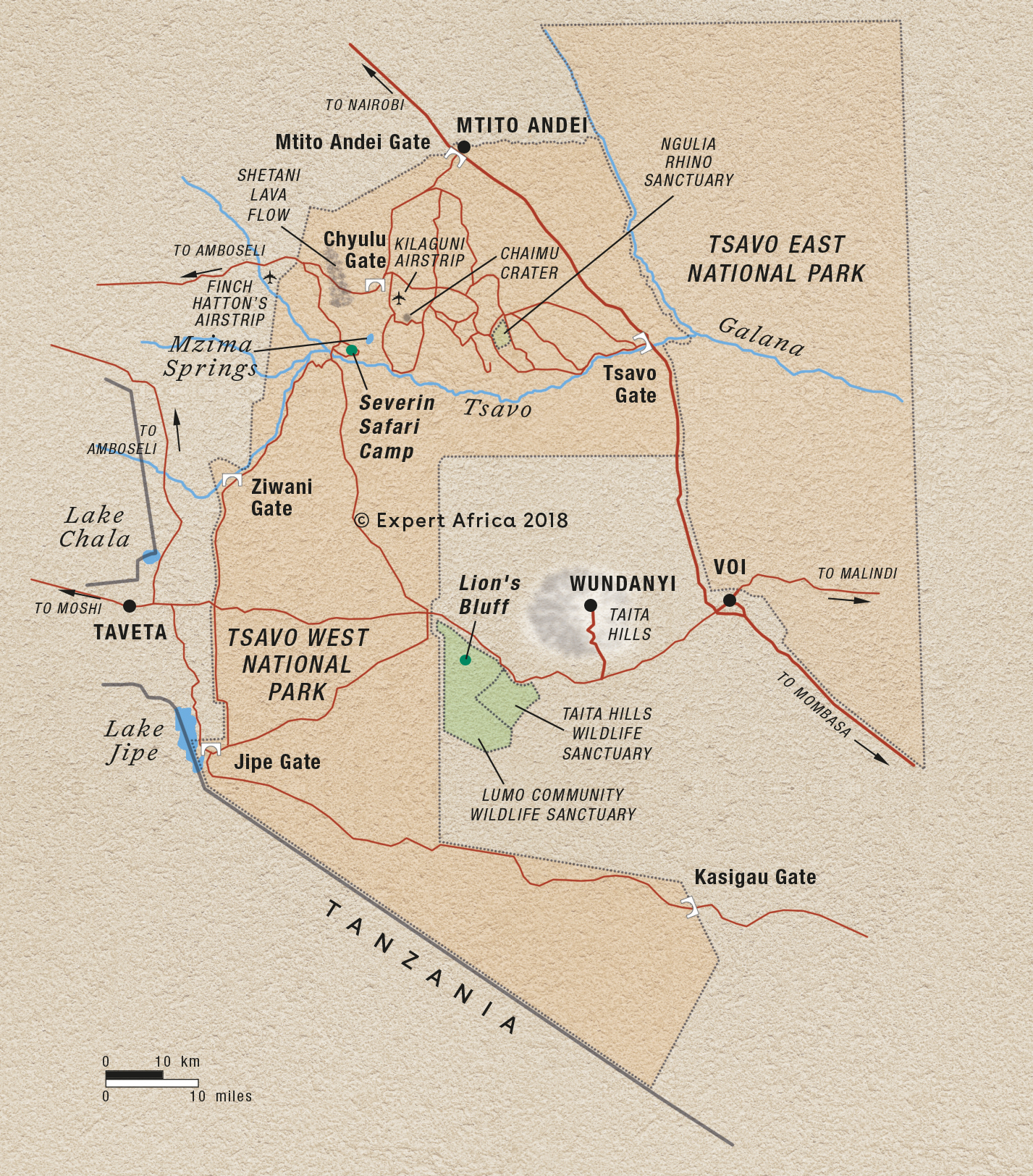 Most recent reviews of our safaris to Tsavo West

Click below to browse all 6 reviews from Tsavo West National Park.
All from our travellers; all are in full & unedited.

"Overall experience was great as we had a really wonderful family time together. …" Read Mrs J’s full holiday review

"The whole trip was fantastic...It's difficult to imagine how you could do better …" Read Steve H’s full holiday review

"Trip of a lifetime"

"Loved talking to Richard...responding to our needs rather than pushing us …" Read Ms P & family’s full holiday review

When to go to Tsavo West National Park

Our month by month guide: What it's like to visit Tsavo West in Kenya

Clear, hot days and warm nights make this high season a popular time for safaris and it’s also good for diving and snorkelling as water clarity is excellent and gets better as the dry season progresses. Most lodges and tented camps treat January after the New Year week is over, as mid-season, making it a good compromise in terms of value for money with reasonably reliable, dry weather and some greenery left in the landscape.

Expert Africa bases its description of climate and weather in January, like the other months of the year, on the climate records of roughly the last 100 years, and it's fair to say that the weather and seasons since the beginning of this century have been highly irregular and unpredictable.

With the short dry season well established, the grass grazed down and wildlife gathering close to water points, this is still a good time for a safari. Good water clarity in the Indian Ocean's coastal waters makes for excellent diving and snorkelling conditions.

Expert Africa bases its description of climate and weather in February, like the other months of the year, on the climate records of roughly the last 100 years, and it's fair to say that the weather and seasons since the beginning of this century have been highly irregular and unpredictable.

Hot, increasingly humid weather – with good diving and snorkelling conditions at the start of the month – gives way to rains and lower accommodation costs. Expert Africa bases its description of climate and weather in March, like the other months of the year, on the climate records of roughly the last 100 years, and predicting the seasons since the beginning of this century has been difficult.

March is the month when – traditionally – intensely hot conditions build up until a cloudburst finally happens at the end of the month or in early April, to relieve the humidity. As ever, regional variations across the country can greatly impact on visitors' experiences.

April sees the full onset of the southeast monsoon wind or kusi, which heralds the long rains. Temperatures drop soon after the rains are established and you’ll often have facilities largely to yourself in this more affordable low season, sometimes known as the "green season". The bush quickly springs to life, with greenery sprouting almost before your eyes. While you're likely to get a fair number of heavy showers, the breaks in the rain can yield sparklingly clear conditions.

With the dust settled and bright sun piercing the clouds, conditions can be sublime for photography, especially first thing in the morning or in the late afternoon with another storm brewing. You may be lucky, or you may find conditions very wet and muddy.

While game viewing can be trickier as vegetation runs riot, between the cloudbursts the colours and light are great for photography at this time of year. Expert Africa bases its description of climate and weather in May, like the other months of the year, on the climate records of roughly the last 100 years, and while it's reasonable to expect heavy rains in many parts during this month, especially on the coast, the rains don't always come evenly or in some areas come at all.

In an El Niño year, the so-called long rains that normally are established across much of the country by May can be meagre, to the despair of farmers. On the other hand in a La Niña year, the long rains can bring floods. On the coast, the monsoon winds make the climate much more predictable, with heavy rains common throughout this month.

The rains give way to cloudy, cooler weather, often making for comfortable conditions by the end of the month, especially in the highlands. Starting from mid-June or the beginning of July and running until the end of October, this is the high season, and accordingly has higher accommodation rates and – at least until early September – higher numbers of visitors.

While the early part of June can often be rainy on the coast, it can be a great time to go on safari, with fresh greenery, many young animals and good photographic conditions with clear air.

Kenya’s “winter" season sets in (winter is a misnomer but locals feel the change), and the highlands can be rather grey. Skies are often cloudy and the days can be surprisingly cool, with an average daytime high in many highland safari areas of 15-20°C and night-time temperatures dropping below 10°C in Nairobi and the highlands. Lower parts of the country and the coast are usually warm and dry, typically reaching highs of around 25°C with lows in the high teens.

As this is the start of the high season, coinciding with the usual arrival of the wildebeest migration in the Maasai Mara, July is a busy month. Ask your Expert Africa specialist to advise on how to avoid the crowds, which is not that difficult to do.

The Great Migration fills the plains of the Maasai Mara, and school’s out, so the park roads are full of tourists – ask your Expert Africa specialist for advice on crowd avoidance tactics. Choose a private conservancy rather than a public national park or national reserve for quieter conditions.

Like July, August is generally mild and relatively dry in the safari areas, but it can be very chilly in the highlands, even in the middle of the day, and hail occasionally falls above altitudes of around 2,400m (8,000ft). Nairobi can be disappointingly overcast, with low cloud.

The skies clearing of cloud signals the start of hot, dry weather with little chance of rain – and, after the first few days of the month, far fewer visitors – making the latter part of September a good time for a quieter safari. While early September is often good for dramatic migration crossings along the Mara River, you might consider deliberately postponing your trip until later in the month, when the migration can still be very impressive and visitor numbers fewer.

If tourist surges are somewhat predictable, however, the patterns of the wildebeest migration are more volatile, and like all of Expert Africa's climate and weather assessments, they are based on accumulated years of experience rather than guaranteed certainty.

Still hot, mostly dry and not too busy, this is many people’s preferred month for a safari, and it’s also good for diving and snorkelling. The wildebeest and zebra herds of the great migration are often still to be seen, though in dwindling numbers. The swamps of Amboseli attract thirsty wildlife including large herds of elephants.

While we wouldn't expect much rain across most of the country this month, the climate has become so unpredictable that you can never say never, and the possibiity of the short rains – usually associated with November to mid-December, starting early, can't be discounted.

The northeast monsoon wind or kaskazi heralds the start of the “short rains", usually some time in the second half of the month. From November to mid-December, this is the low season, and accordingly has lower accommodation rates and lower visitor numbers. Across most of the country you can expect warm, somewhat cloudy weather, with occasional heavy showers and localised flooding.

Expert Africa bases its description of the climate in November, like the other months of the year, on the records of roughly the last 100 years, and it's fair to say that the seasons since the beginning of this century have been highly irregular and unpredictable: some years the short rains don't come at all, or don't reach every part of the country. In an El Niño year, the November short rains can be very heavy, but in a La Niña year, they can fail completely.

In a typical December, the rains usually finish by middle of the month, leaving the landscape looking its best, under clear blue skies, and heralding the start of the second peak tourist season from around 20 December to the first week of January. Our assessment of the likely weather in December, like the other months of the year, is based on climate records, and it's fair to say that the seasons since the beginning of this century have been highly irregular and unpredictable.

Christmas can sometimes be wet, but most years the rains have finished a week or two earlier, with the festive season ushering in the perfect combination of clear skies and sunshine by day and starry nights.

Useful information and advice to help you prepare for a trip including Tsavo West National Park.