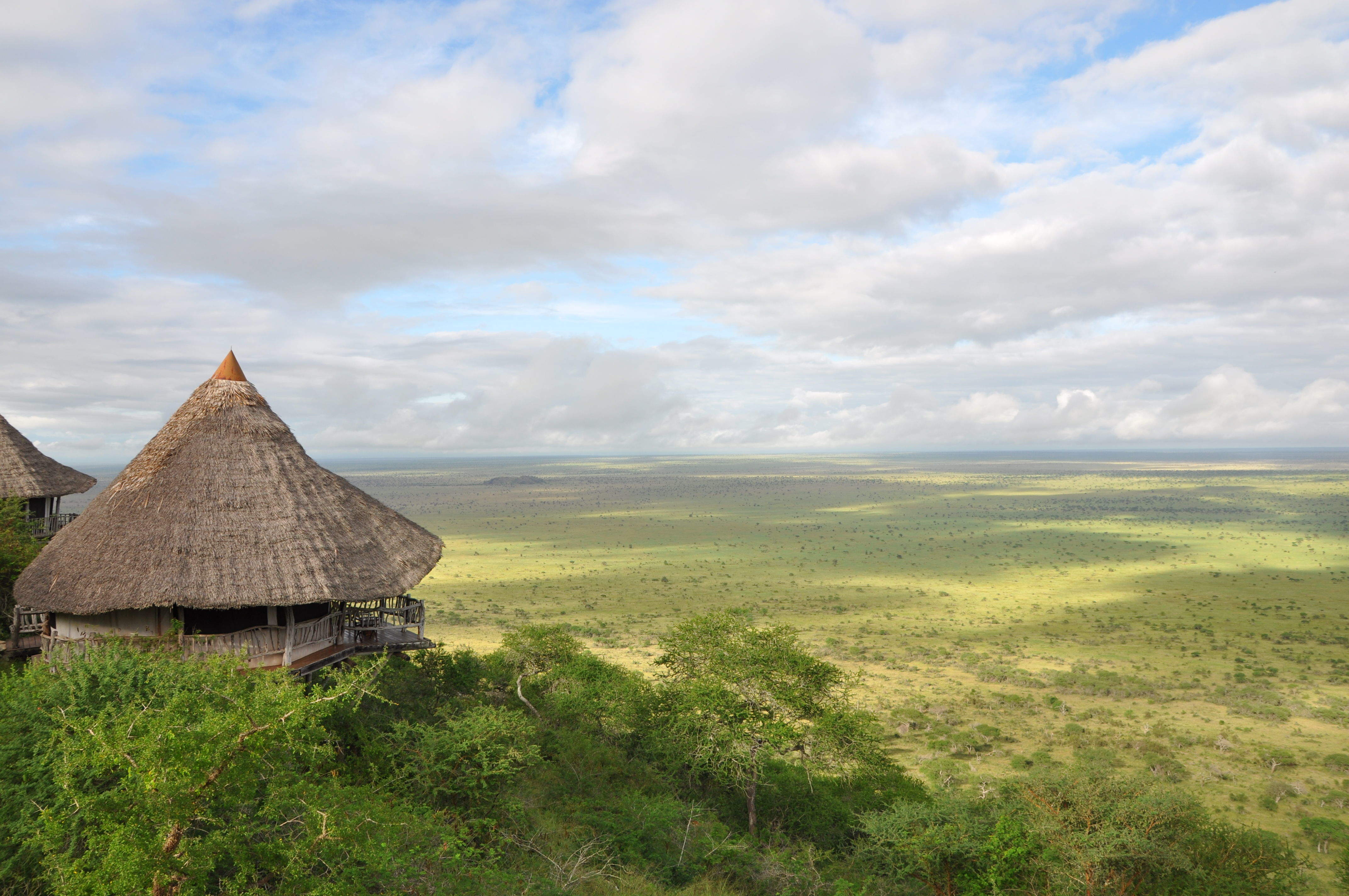 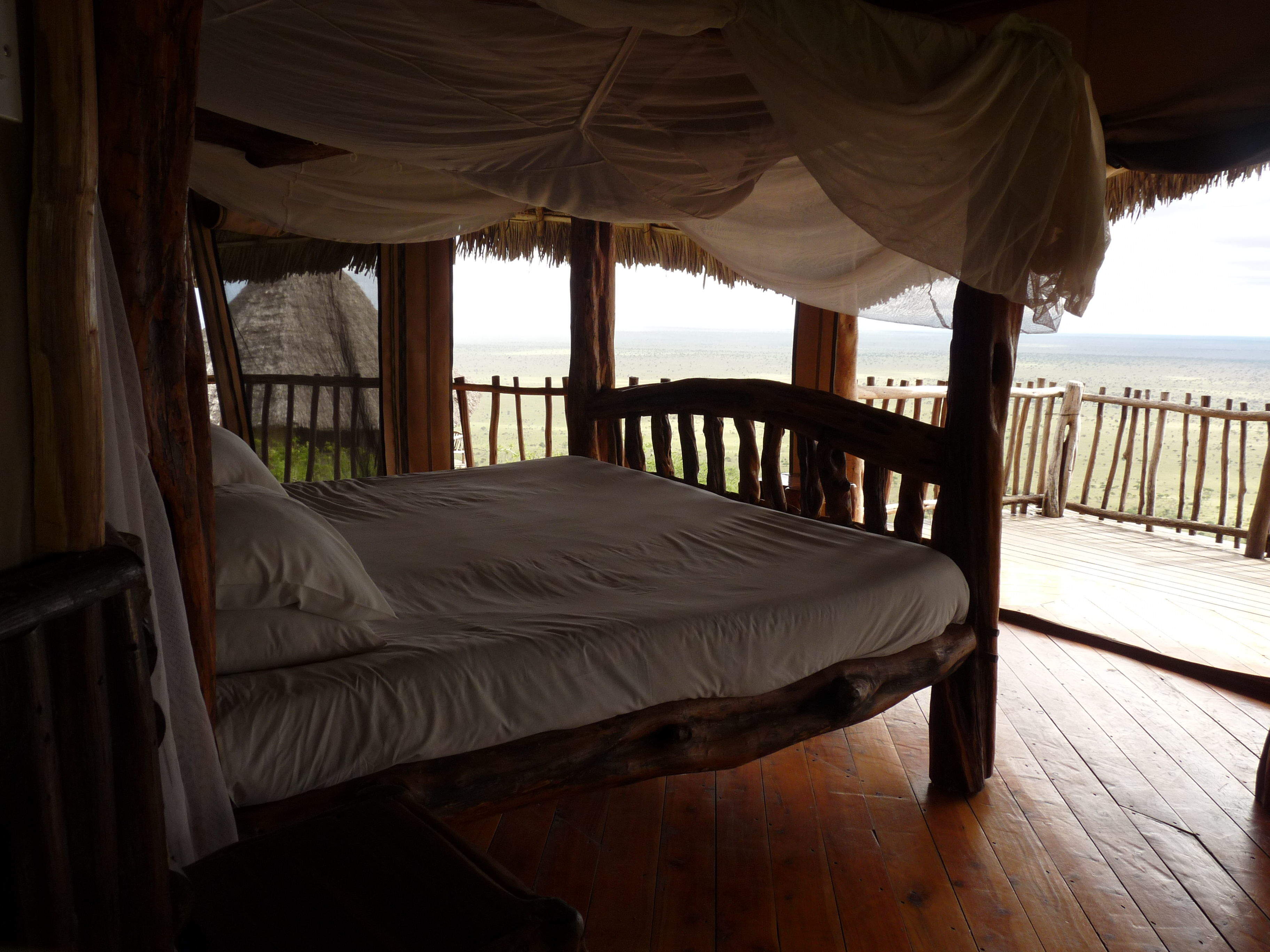 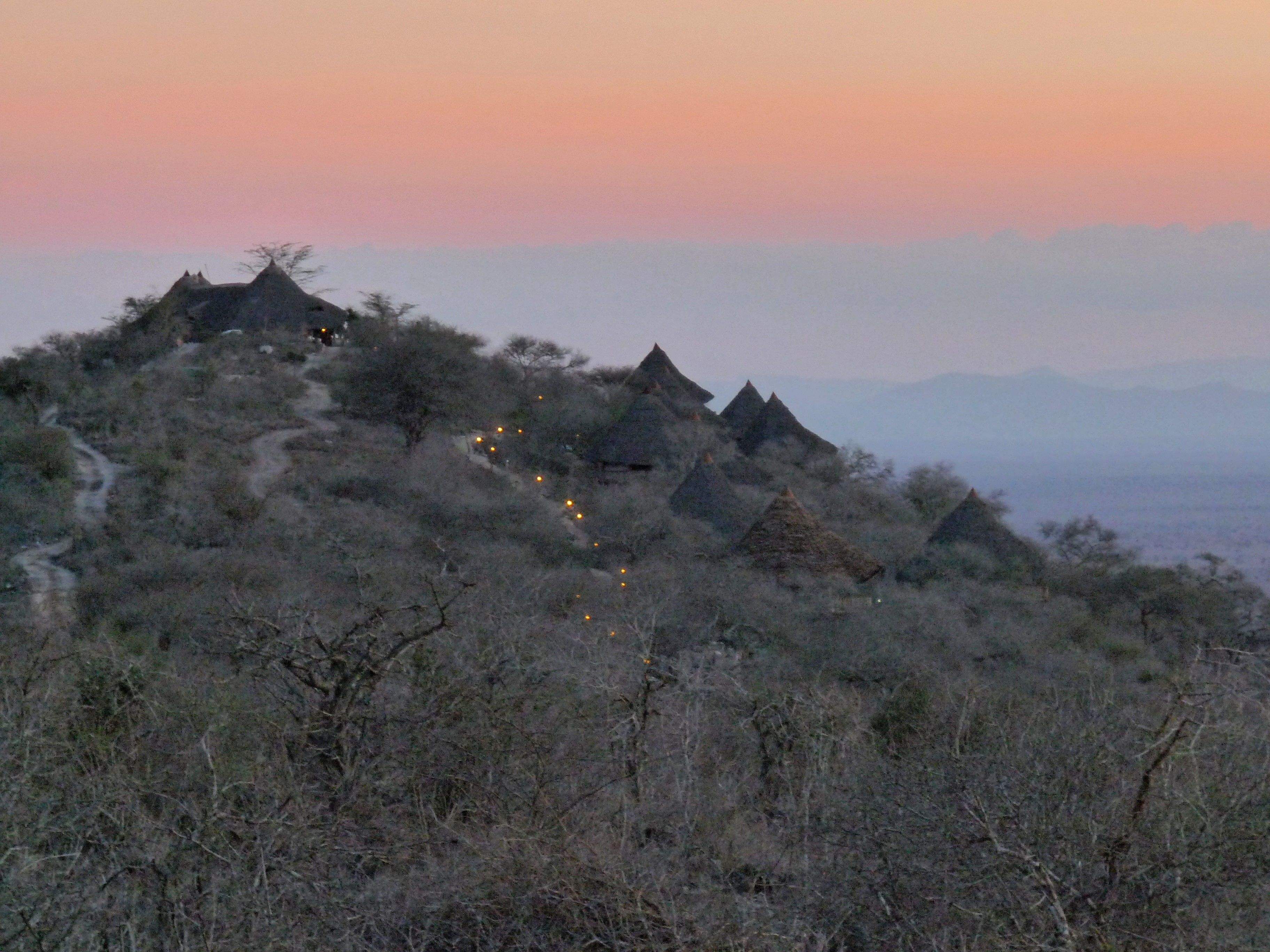 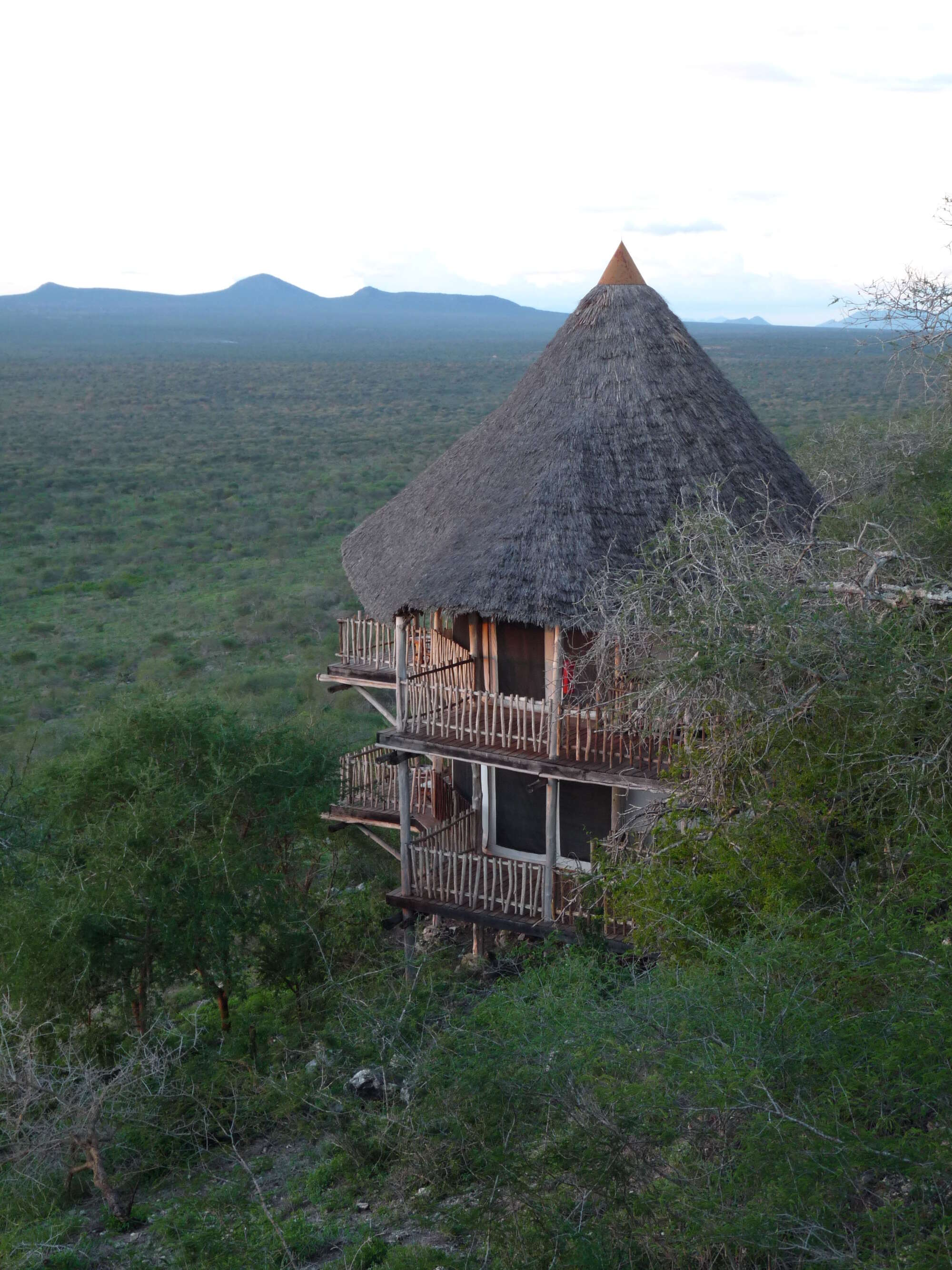 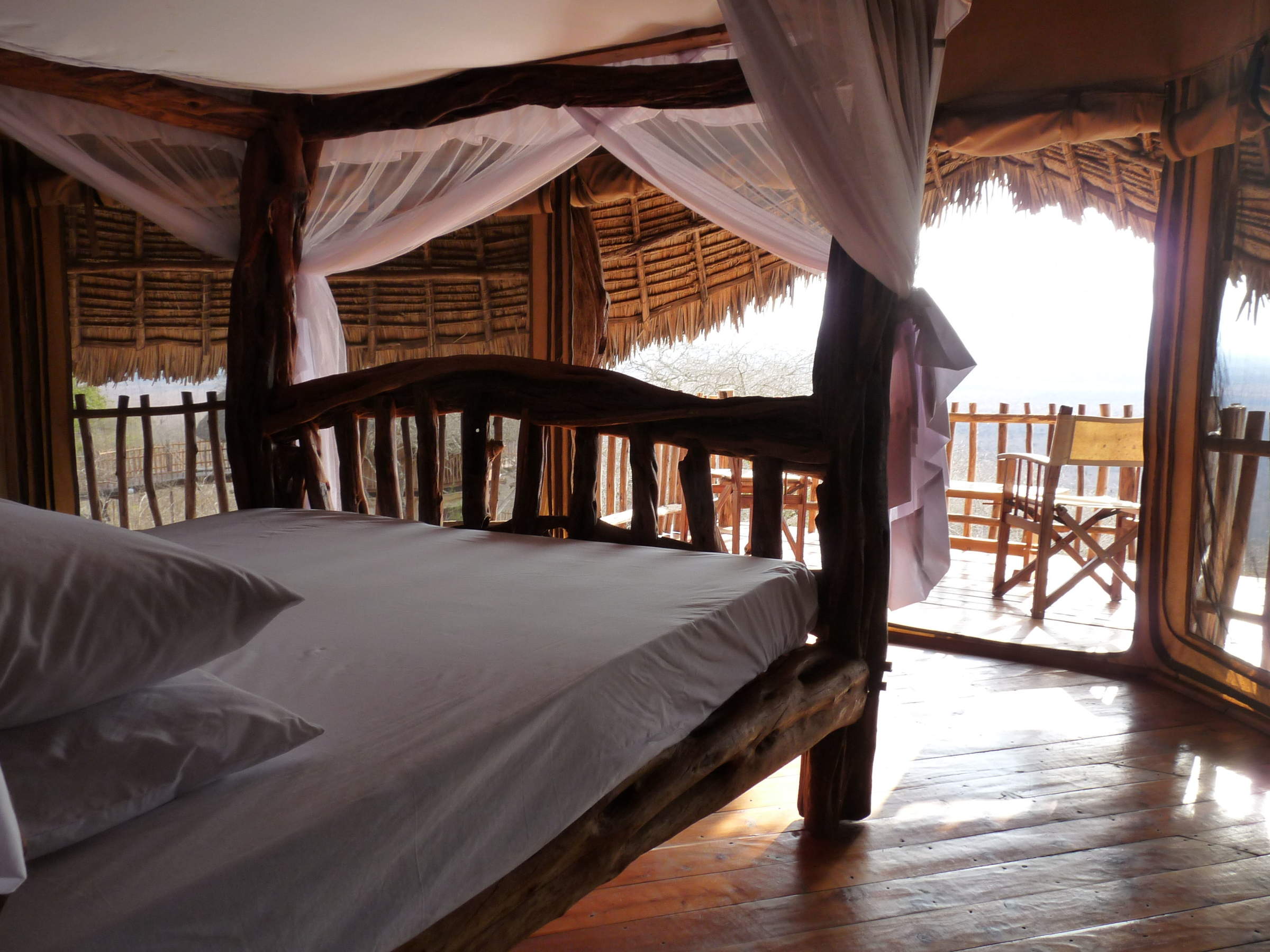 Located in the Lumo Community Wildlife Sanctuary, between Tsavo West National Park and the coast, Lion’s ...

... Bluff Lodge – the former Lion Rock Tsavo Camp – is a mid-range safari lodge, spectacularly sited at the end of a ridge, and offering game drives, night drives and bush walks. LUMO is an association of the Lualenyi, Mramba and Oza ranches whose communities have come together to benefit from wildlife tourism. In addition to opportunities for employment, the community receives various fees from guests at the lodge and visitors to the sanctuary.

The journey from the airstrip up to Lion’s Bluff – billed as ‘The View with a Lodge’ – is reassuringly rough and rugged. Driving south up the spine of the ridge, you finally reach the lodge at its southern tip, where a superb 270-degree panorama looks west, south and east from the bar, lounge, restaurant and other main areas. The rooms are on the west side, facing Mount Kilimanjaro and often stunning sunsets.

From the reception and the lodge shop (where crafts made in the local community are sold), a pleasingly rustic bridge/walkway leads to the dining area under high thatched roofs, with the bar and lounge at the far end. This area is sheltered by floor-to-ceiling windows, to protect guests from sometimes gusty breezes. On the right, a little lower down the hill and facing west, is a sundowner terrace, scattered with chairs and tables and with a firepit. Whenever possible, dinner is served out here.

It’s quite a long walk – around 400m – from the furthest of Lion’s Bluff’s 12 rooms to the bar-lounge-restaurant, but this is indicative of how far apart the rooms are – an average of more than 25m, giving plenty of privacy.

Many guests enjoy the environment around Lion’s Bluff so much that they do fewer activities than might otherwise be the case. Early-morning and late-afternoon game drives in the lodge’s soft-sided, soft-topped, 9-seater Nissan 4WD are the principal activity. The 500km² Lumo sanctuary, which shares its conservation responsibilities and game-driving area with its neighbour, the Taita Hills Game Sanctuary, has good numbers of savannah animals, with as many as 1,000 buffaloes, and around 100 elephants. Predators are less common. There are at least a dozen lions, but leopards are few and rarely seen and cheetahs – also present only in small numbers – move in and out of the sanctuary. We once saw a very large male cheetah on a night drive here. The Lumo bird list stands at 360 species, but an ornithologist based here during our last visit (a resident ornithologist is planned to replace him) believes it may be significantly higher than that.

The nature walk we did with Lion’s Bluff’s ornithologist and a traditionally armed ranger was interesting but very tame – we only ventured a few hundred metres south of the lodge down the ridge, but learned the traditional medicinal uses of various plants, such as how the Sodom apple helps expel little thorns from under the skin. We also had fun practising shooting with the ranger’s bow, and managed to make fire with a stick and a board – both activities that children will thoroughly enjoy.

A stay at Lion’s Bluff is memorable and very worthwhile and the helpful and committed staff are a big asset. The views alone are worth the trip and we loved the west-facing tents on decks, with their fabulous views and pretty, four-poster beds. The bathroom arrangements need improving, however, and we think the lodge is let down by the standard of meals. We understand some improvements have been made in both areas. Either way, with non-seasonal rates it’s great value all year round.

Usual board basis
Full Board
Food quality
We ate only dinner and breakfast at Lion’s Bluff, but we were disappointed with the overall quality of food and presentation, especially perhaps because the location of the dining room and bar is sublime.

Our buffet breakfast, available 6.00am–9.30am, was rather poor overall, with poor to average fruit, and a below-average cooked breakfast – though the black pudding was a nice surprise, and the coffee was fine.

A three-course dinner, again with just one main course, is served between 8.00pm and 9.30pm. Our meal consisted of a tasty enough if rather cold tomato soup, followed by a buffet of roast chicken, poorly roasted potatoes, carrots, and gritty spinach. To finish we were served bread and butter pudding.

Attitude towards children
Children over the age of five are welcome at Lion’s Bluff.
Special activities & services
Children will enjoy bow and arrow making, and fire-making.
Equipment
2 cots, no highchairs
Generally recommended for children
Lion’s Bluff is fine for older children, but younger ones need to be under supervision, because of the large number of steep edges and places for possible falls.

Communications
There’s good cellphone coverage, and internet access is available in the office on request.
TV & radio
TVs in the office and staff mess can be watched during important sporting events.

Malarial protection recommended
Yes
Medical care
Lion’s Bluff is a partner of Sarova, who have a qualified medical officer at Taita Hills Lodge, 20 minutes’ drive away. The lodge is registered with the Flying Doctors, who would land at the Sarova Airstrip.
Dangerous animals
High Risk
Security measures
There are security staff at the lodge, day and night, and rangers both at the gate and at the neighbouring Taita Hills Game Sanctuary. All are KWS-trained with firearms licenses pending.
Fire safety
Every room has a fire extinguisher and there are more around the public areas. All staff do fire drills every three months.

Disabled access
On Request
Laundry facilities
Full Laundry Service - Extra Charge
Money
There’s a safe in the office. No currency can be exchanged.
Accepted payment on location
Cash payments may be made in US dollars, euros, pounds sterling or Kenyan shillings. Visa, MasterCard and Amex are accepted with a 3% surcharge.

Severin Safari Camp is a carefully managed and unfenced safari camp, in a game-rich part of Tsavo West, close to Mzima Springs and dramatic nearby lava flows.