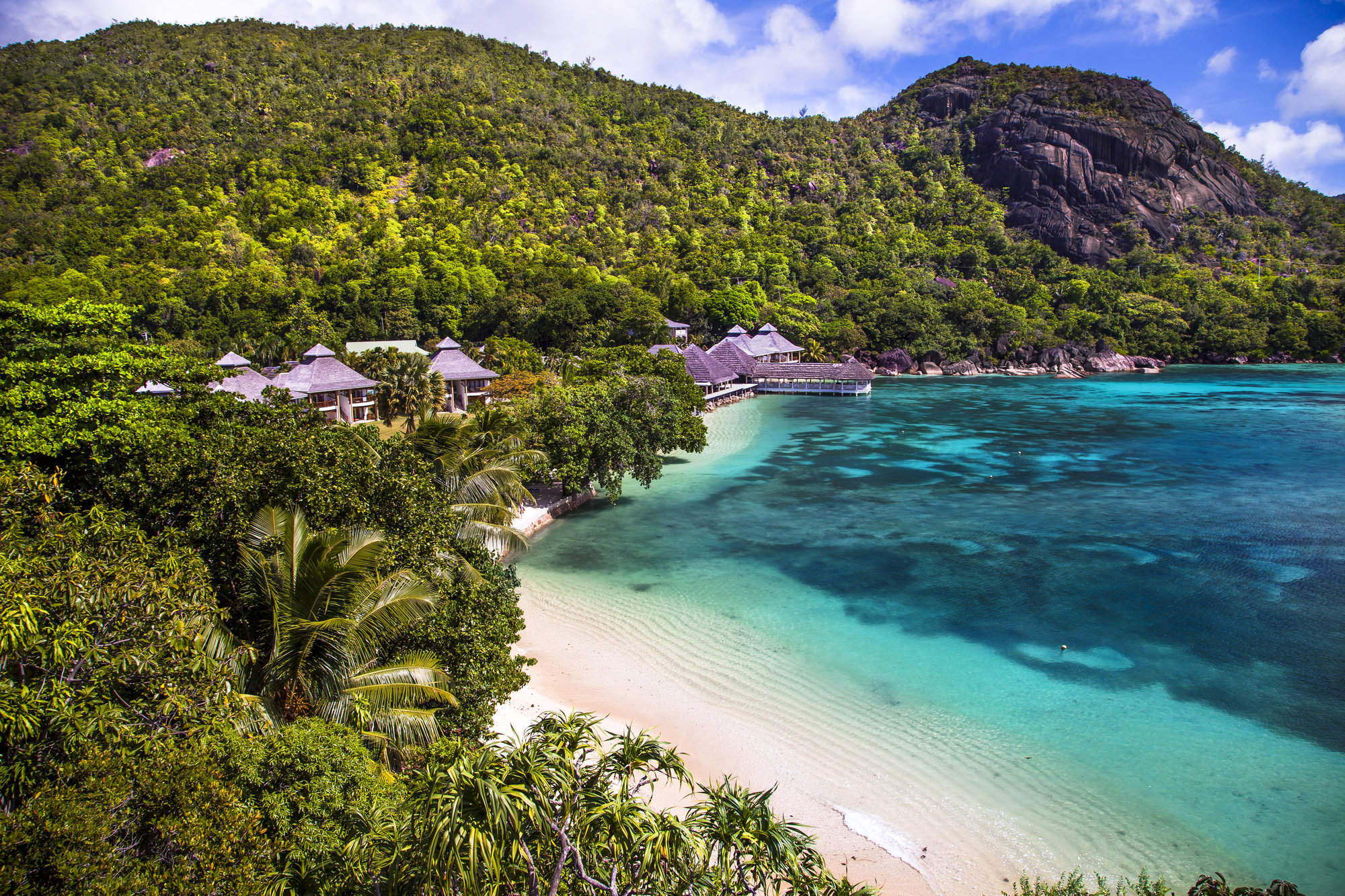 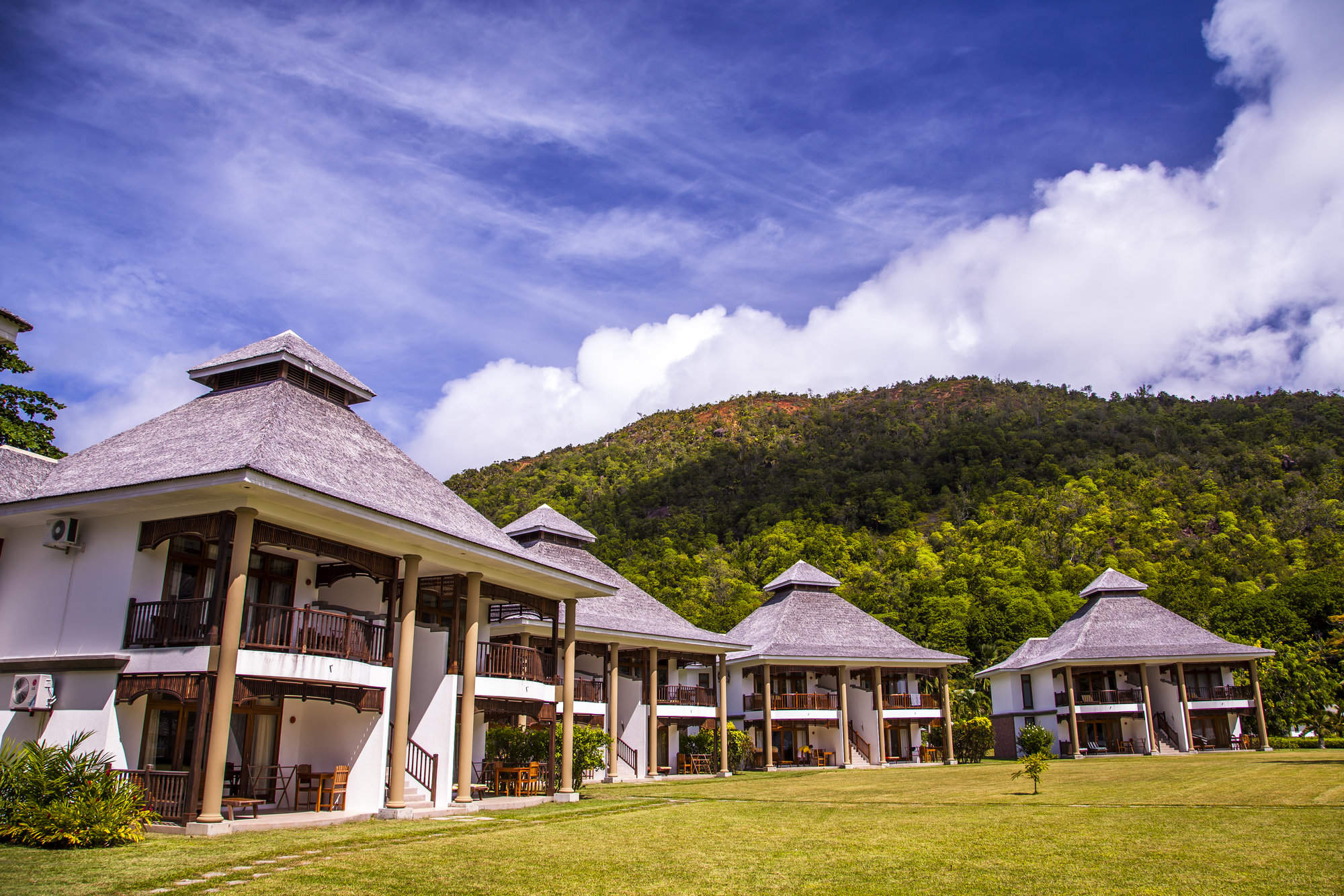 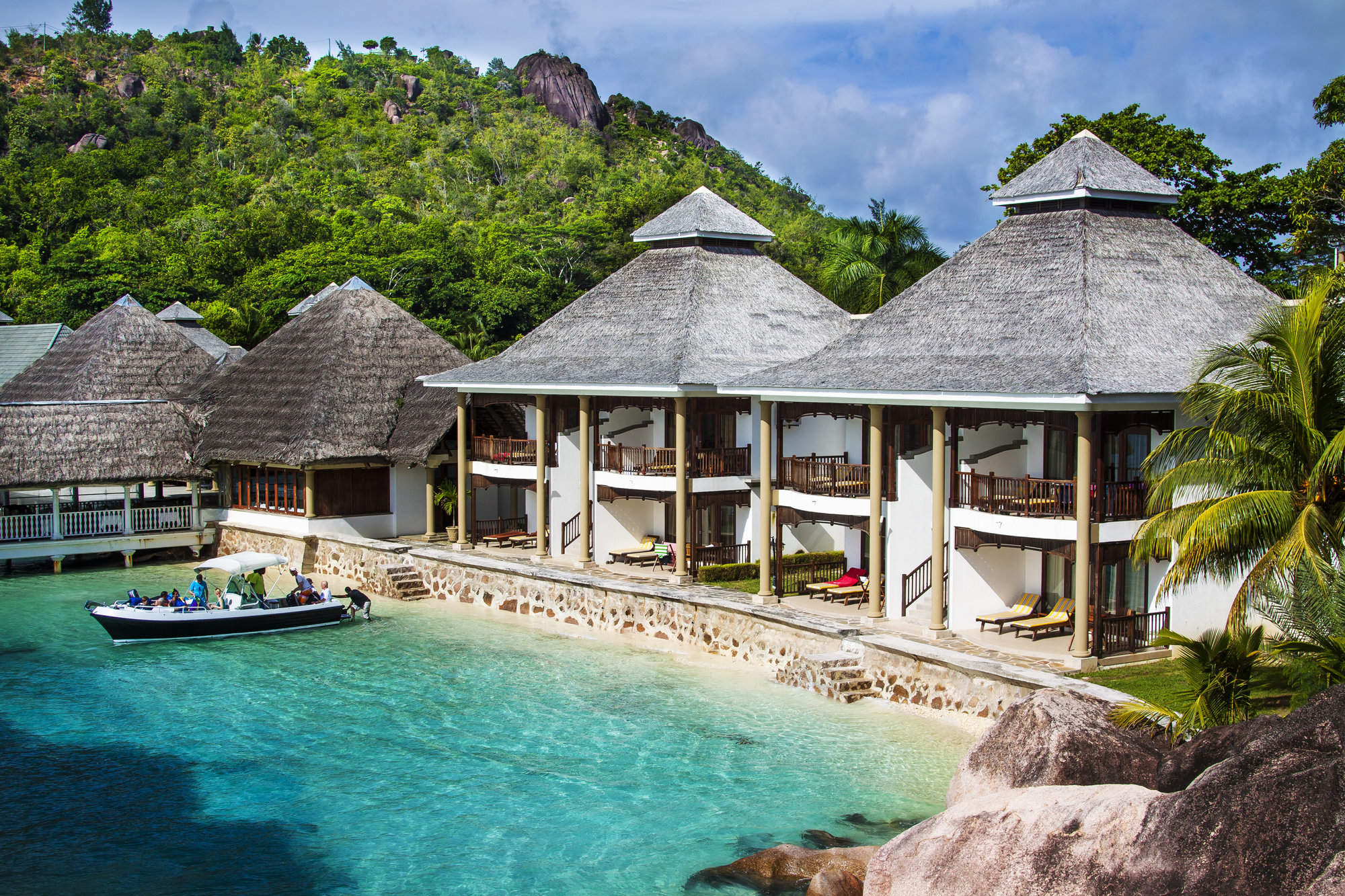 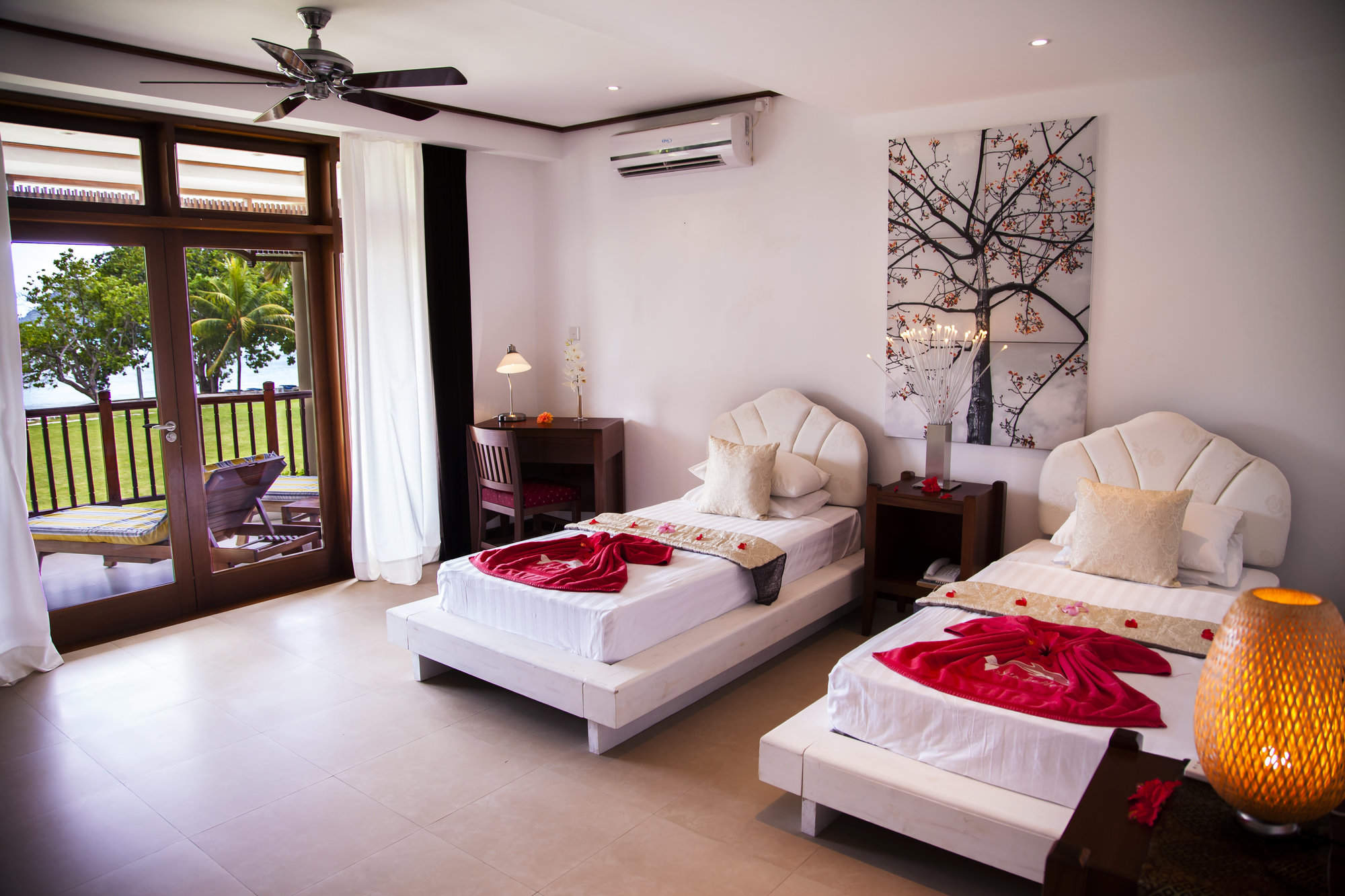 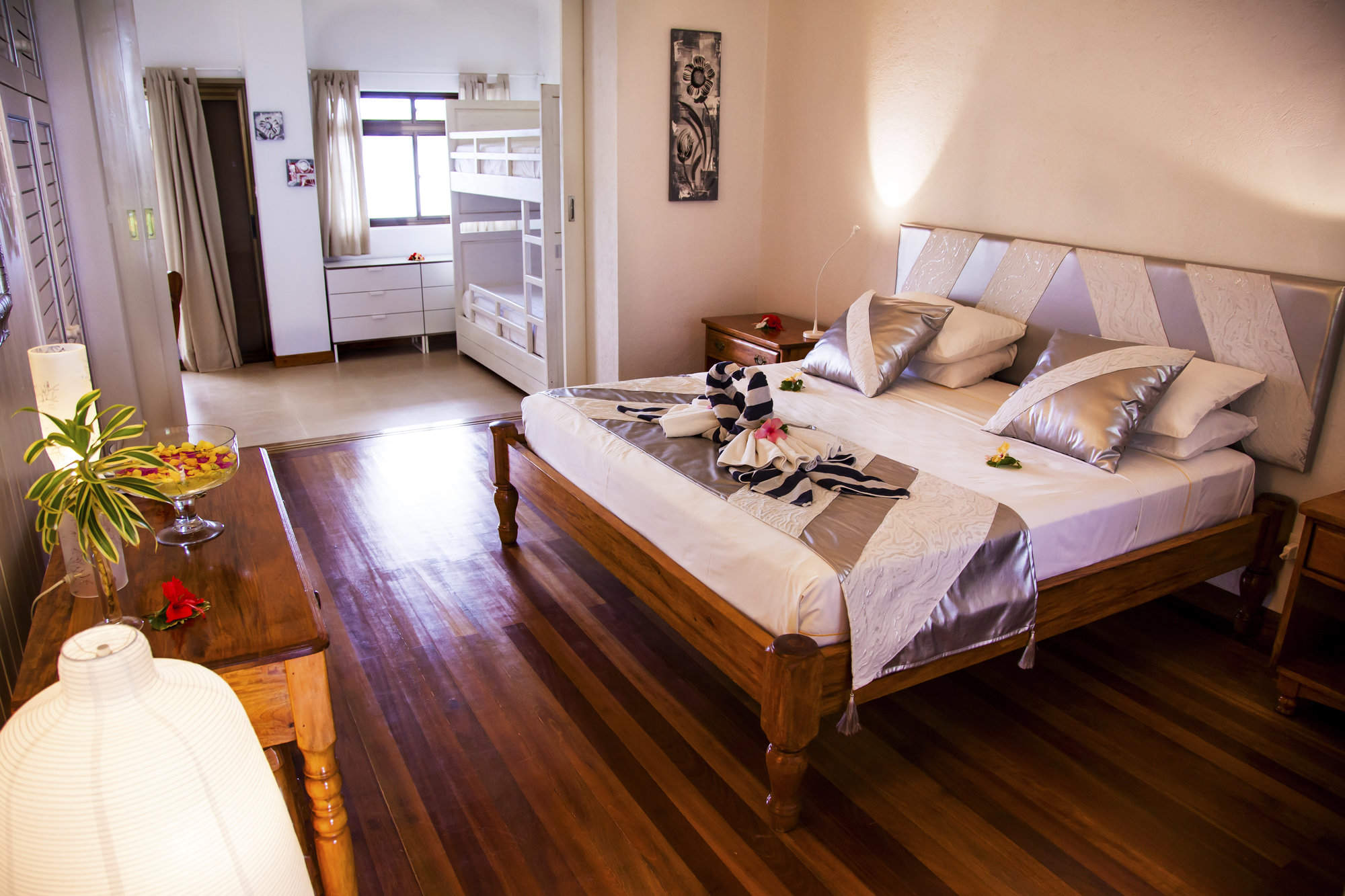 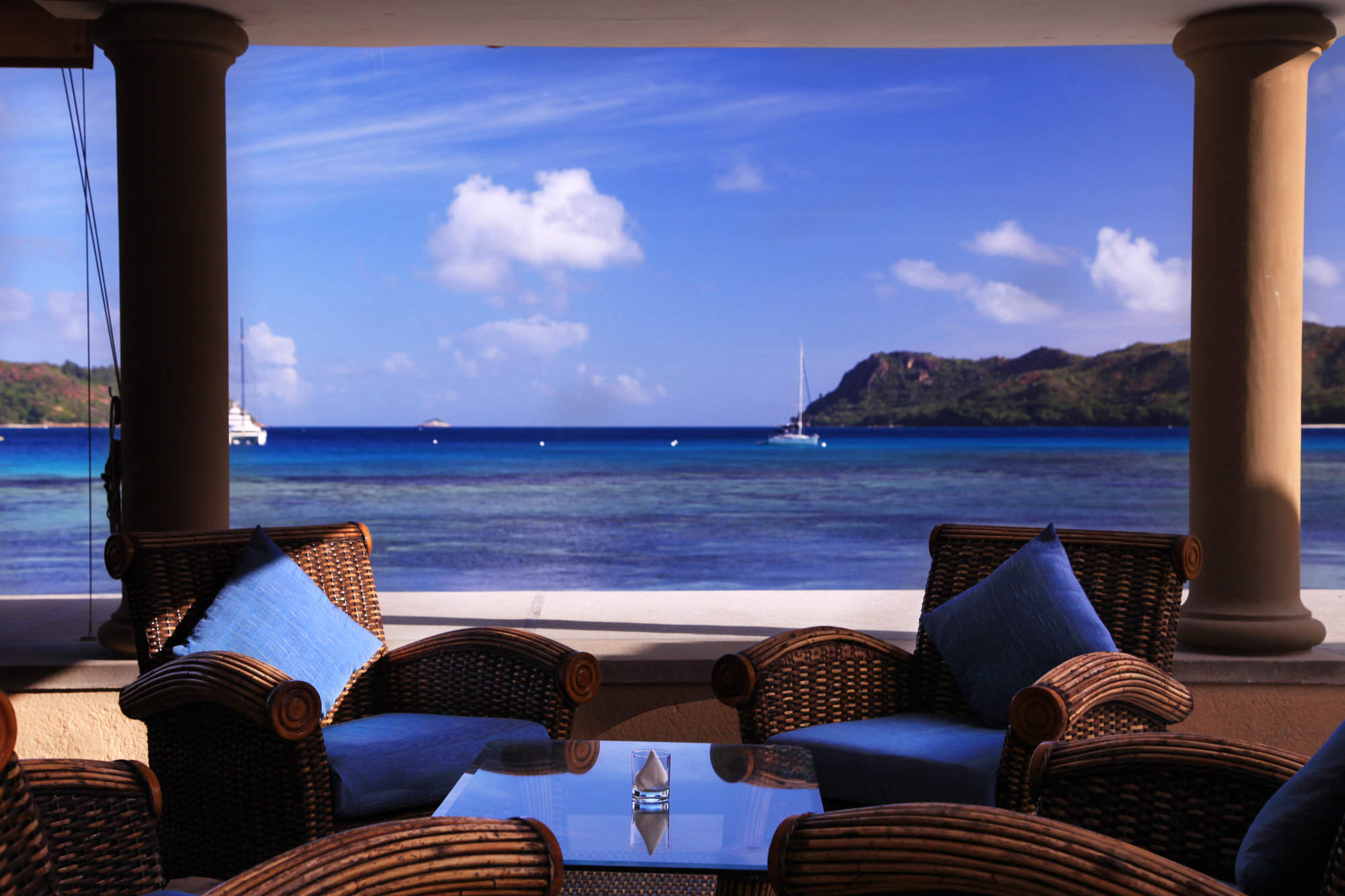 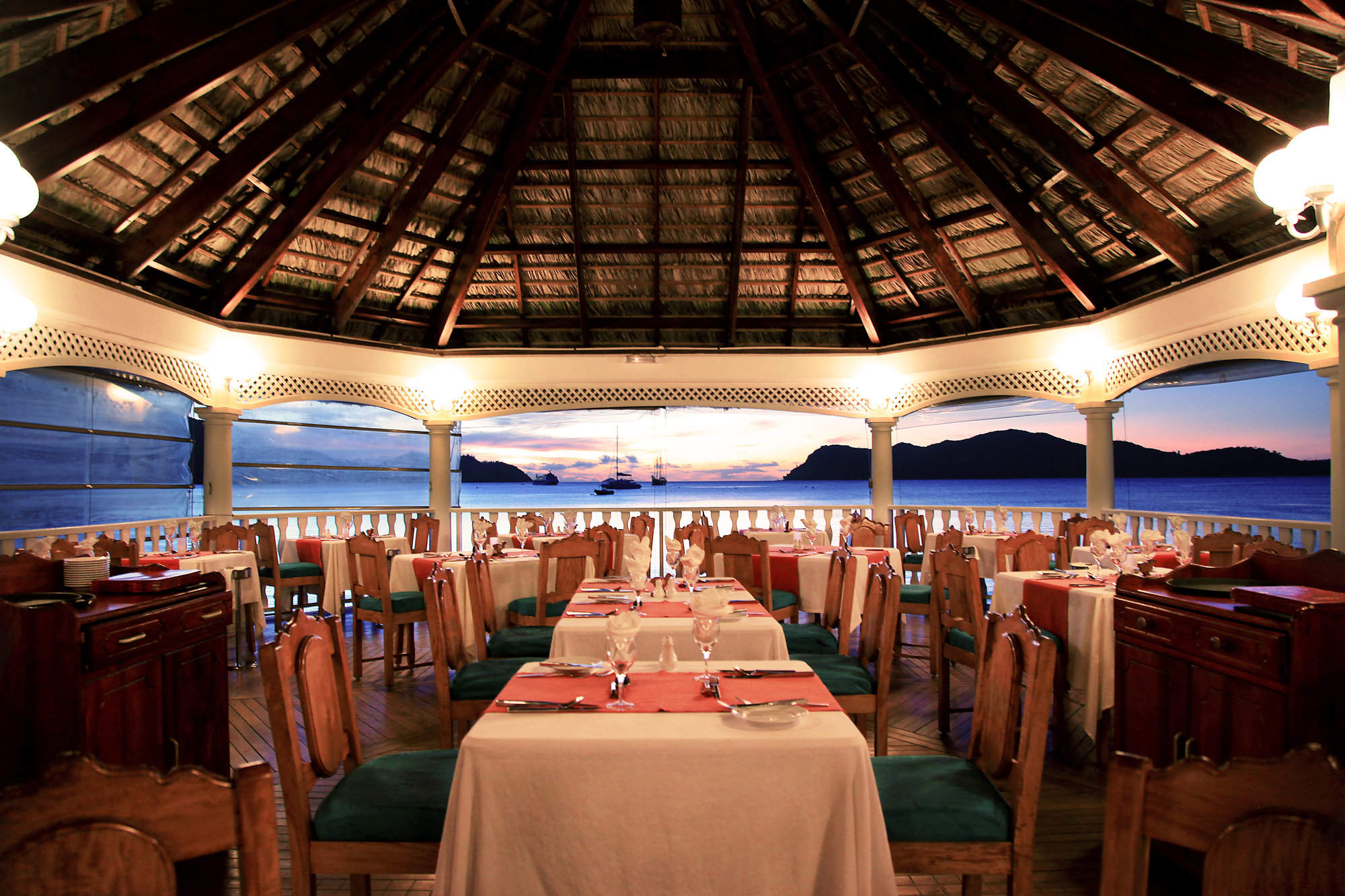 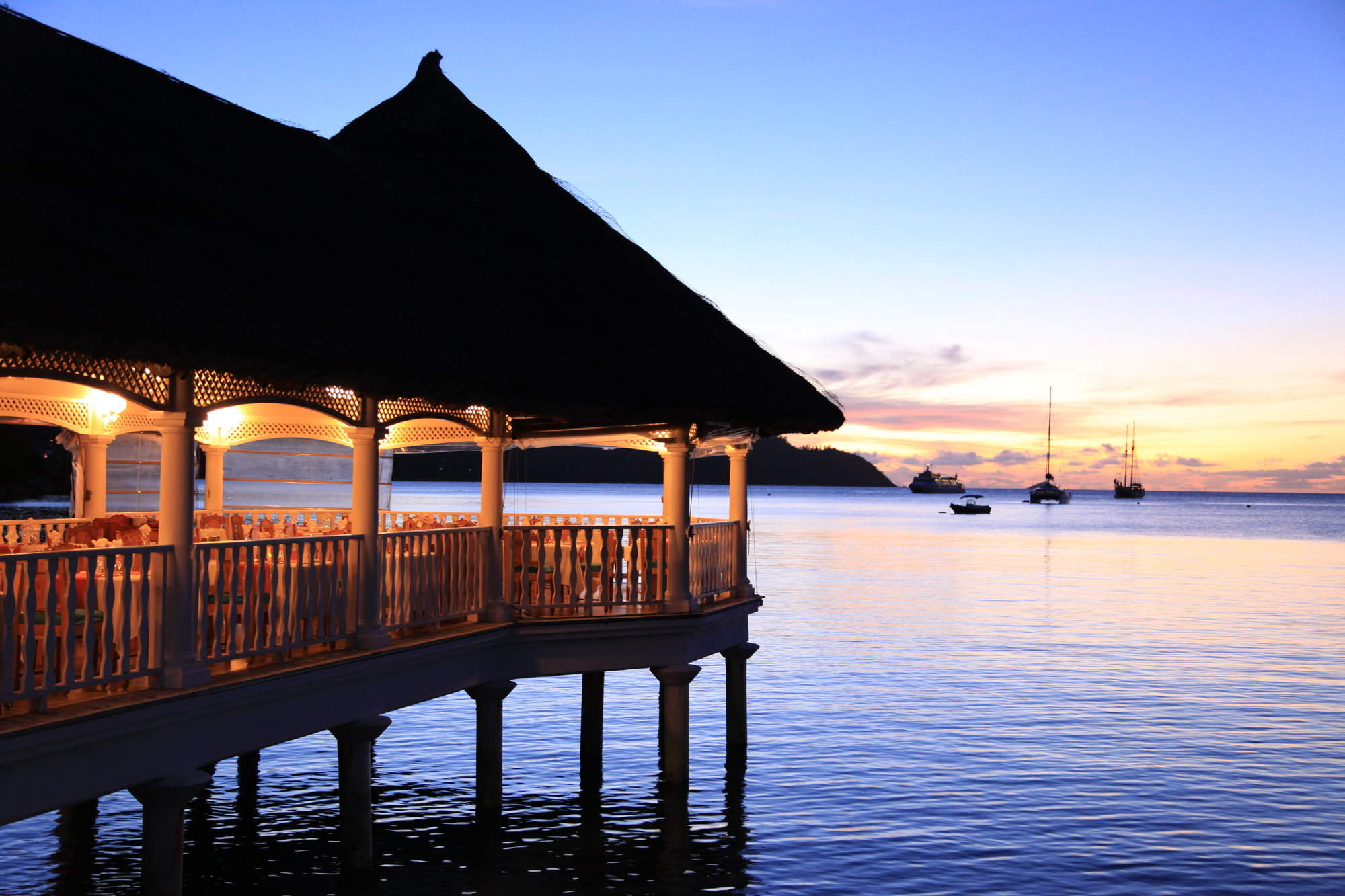 Situated on the north-eastern side of Praslin, Le Domaine de La Réserve is right on the beach in the calm ...

... bay of Anse Petite Cour. It’s a four-star property with Seychellois owners and, refreshingly, is not part of a big chain. While in a cove that feels very private, the hotel is a relatively short walk across the headland to the buzzier Anse Volbert beach, which has a handful of restaurants.

Set in tropical gardens facing the sea, the 40 rooms at La Réserve are attractively arranged in groups of four, with three distinct styles. The ‘deluxe’ rooms are double-storey whereas the 'superior' rooms and family suites are on one level. When we last visited the resort, in July 2015, we considered them to be of a very high standard.


La Réserve has two restaurants: the L'Obrizan Restaurant, located on a jetty over the Anse Petite Cour Reef, where you’ll be served a buffet breakfast and buffet or set menu dinner, and the Pool Grill, which serves lunch à la carte. The bar here is open for drinks and snacks most of the day, and they serve complimentary tea with sandwiches and cookies by the pool every afternoon. Further dining options can be found at Anse Volbert beach, a walk of about ~1km across the headland.

In front of La Réserve is the narrow sandy beach of Anse La Cour. Although not technically private (none of the beaches in the Seychelles are), it can only be reached through the hotel or from the sea, so hotel residents have it pretty much to themselves. Sunbeds are spread out along the beach and around the absolutely huge pool, which has shallow areas that are great for children, and which we think of as one of the nicest pools on Praslin. The sheltered bay itself is calm for most of the time, and thus very good for swimming. Note that the beach disappears at high tide but there are lots of other lovely beaches a short drive away – though you'll need a car to get to these.

As with all the beaches on Praslin, at certain times of the year the current brings some seaweed onto the beach. At La Réserve the winds between November and April mean the beaches here may be affected, but they have beach cleaners who clear the seaweed each day.

Other facilities at La Réserve include a free internet service (although the connection is slow, as in much of the Seychelles), and a boutique stocking basic provisions, souvenirs and beachwear.

La Réserve runs a number of guided excursions, some complimentary. These include sunset cruises, snorkelling trips to St Pierre and Curieuse, and day trips to Vallée de Mai and La Digue. The resort is in the Curieuse Marine Park, which you can explore by borrowing kayaks or snorkelling equipment from the beach kiosk. Although there is not much in the way of coral in the bay, there are quite a few colourful fish by the rocks. (They can be seen easily from the Jetty Restaurant at night, too!).

We consider that La Réserve is at the upper end of the four-star scale. It is smart and professionally run and the rooms, especially the 'deluxe' rooms, are of a high standard. The resort is in a lovely, quiet, private setting and on various visits here we've found the staff to be very friendly and efficient, and the food some of the best we eaten on Praslin.

Usual board basis
Half Board
Food quality
Although we didn't stop for a meal at La Reserve on our most recent visit in July 2015, the food we've eaten on past visits has been some of the best that we've experienced on Praslin.

A huge buffet breakfast is served in the Jetty Restaurant. Choose from a selection of fresh fruit, cereals, bacon, eggs, hams, cheeses, pastries and toast – you name it!

Although we didn't eat lunchhere, there was a nice menu that included a selection of grilled fish and meat dishes and salads.

A buffet dinneris served four times a week, each with a different style, with a set menu on the other three evenings. During one of our stays we were treated to an Asian-style buffet: crispy-fried squid with sweet chilli sauce for starters, then hot and sour soup, then a choice of main courses including prawn-fried rice, duck with hoisin sauce, beef in black-bean sauce and vegetable chop suey. If that wasn't enough there was also a huge array of desserts – mango mousse, chocolate mousse, crème brûlée, crème caramel and banana and coconut tart.

Walking
La Reserve is a good base to explore the palm forests of Vallée de Mai. With towering trees, streams, waterfalls, and the coco de mer palm, Vallée de Mai is a beautiful place to explore on foot and a great place for walking on holiday in Seychelles.
See ideas for Walking
Luxury
La Réserve is the perfect hideaway for those seeking a calm, relaxing retreat with a high-level of luxury and an exclusive setting due to the private beach. In the middle of the swimming pool is a restaurant, where dining on submerged bar stools is possible.
See ideas for Luxury

Attitude towards children
La Reserve welcomes children.
Property’s age restrictions
The hotel has no age restrictions on guests.
Special activities & services
La Reserve can arrange babysitting at extra charge, although note that sometimes this will be done by members of staff not trained in childcare.
Equipment
Cots and highchairs can be provided.
Generally recommended for children
We would recommend La Reserve for children. The beach is considered safe for swimming and the pool has shallow areas where children can paddle. There are also big grassy areas to play on.
Notes
Obvious care must be taken by parents when beside the water, both sea and pool, and on balconies.

Power supply notes
UK -style 3-square-pin sockets are fitted throughout. International adaptors are normally available from reception, though it would be wise to bring your own, if required.
Communications
There is cellphone reception and IDD phones in the rooms. WiFi is available in the main areas.
TV & radio
There are televisions in all the rooms with a selection of satellite channels.
Water supply
Mains
Water supply notes
All rooms have a flushing toilet and shower. The 'deluxe' rooms also have a bathtub.

Malarial protection recommended
No
Medical care
The nearest hospital is at Baie St Anne, about 10 minutes' drive away. The hotel advises us that they keep a full first-aid kit on site.
Dangerous animals
Low Risk
Security measures
The hotel is gated and there is 24-hour security.
Fire safety
We are told that each room is equipped with a fire alarm. We could also see fire extinguishers and fire hoses in the reception area.

Other lodges in Praslin Island

Coco de Mer Hotel is a cheerful place on the south-west coast of Praslin, which is very well run. More for families than honeymooners, it offers good value and plenty of activities.

At the end of Côte d'Or, above the secluded beach of Anse Gouvernement, Hotel l'Archipel is a lovely, old-school hotel reminiscent of the island's colonial past.

Other areas in Seychelles