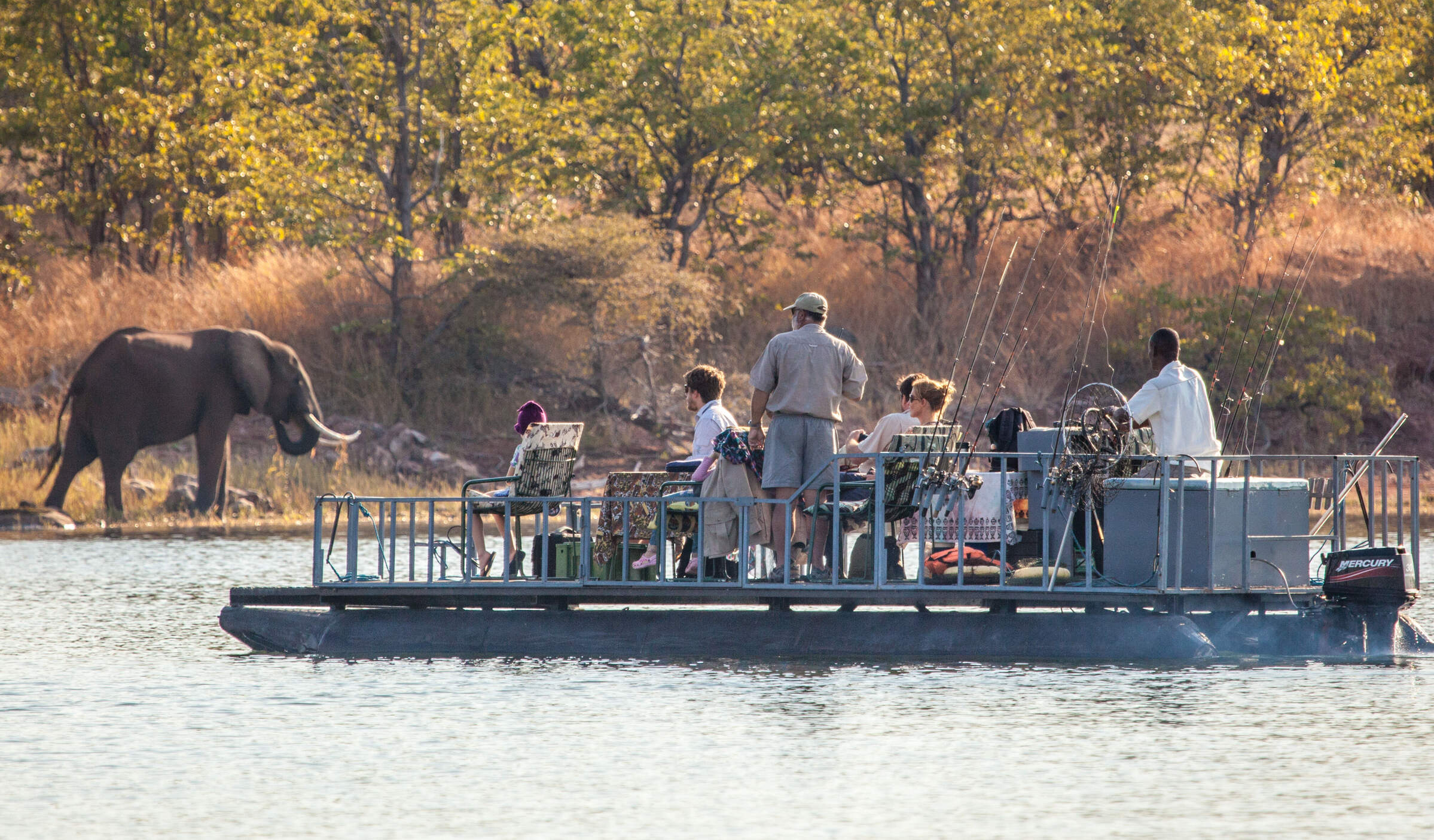 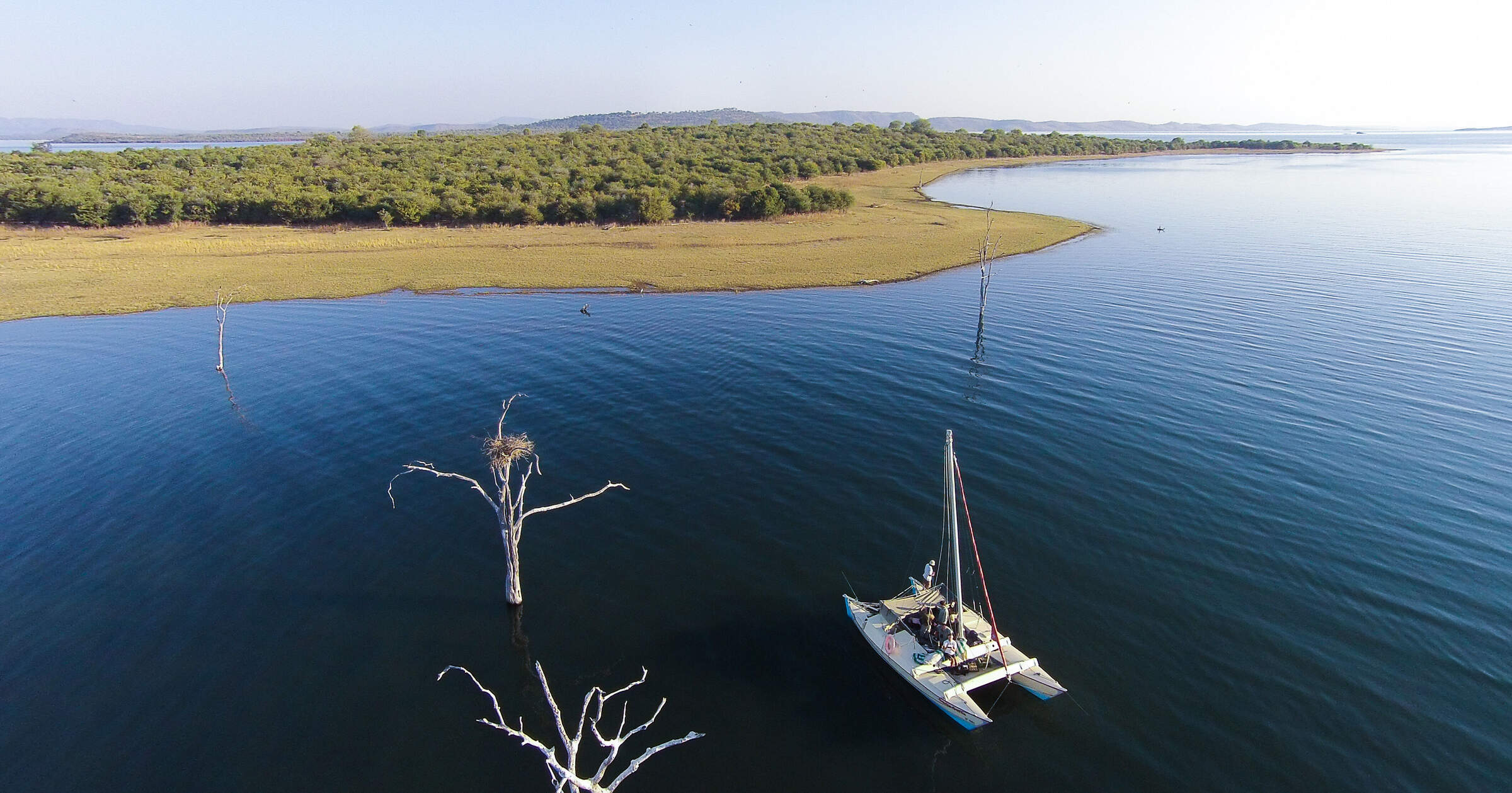 7 independent comments and wildlife information from our travellers who have visited Musango Safari Camp and kindly agreed to share their thoughts. They do not necessarily represent the views of Expert Africa

"A real home from home experience."

4 nights Arrived 3 Nov 2015
"Steve Edwards is a legend and we are privileged to have spent time at Musango, his home. Steve was extremely generous with both his time and hospitality.

Spending time at Lake Kariba, between 2 more conventional safari camps, gave us a very different perspective of the country. We very much enjoyed the variation of time pottering up the lake inlets trying to avoid the hippos and crocodiles; speedboating across the lake to watch large concentrations of game on the far foreshore; tracking lions with Steve (4+ hours); a visit to the camp's local fishing village.

4 nights Arrived 23 Nov 2014
"We loved this even more than Hwange. It is great being on an island, in your own place, away from everything else, overlooking the lake, so you can watch a hippo pop up and down as you cool off in your own plunge pool, as well as the occasional crocodile. Conrad was a great guide so we learnt loads about the wildlife and Zimbabwe. Being on the pontoon was so peaceful and we got up so close to so many animals: loads of hippos, elephants, crocodiles, impala and more. We saw the most amazing birds as well. It was very relaxing to have plenty of time between the morning and afternoon game drives. Good food and very friendly staff; we were made to feel very welcome and dinner on the pontoon in the middle of the lake with all the stars out was a real highlight. It was also very nice to be upgraded to a honeymoon suite with our own plunge pool

Downsides: the camp owners were away for entirely understandable reasons (Steve was having surgery), and Conrad and the other staff made excellent hosts, but a gap year student was staying at the same time, and as we were the only guests, he came along on every trip until we specifically said we'd rather he didn't; this was quite awkward and may well not have happened if Steve and Wendy had been around; we took your advice and spoke very directly to Conrad about it and he sorted it out, but we think it's important that the owners are made aware that if they're not there, a very chatty, over-confident gap year student tagging along with you the entire time is pretty painful.

Also, as Conrad was the only guide there it quickly became apparent that trips by pontoon were the only option; we were assertive enough to ask for him to arrange a walk in the nearby national park with the excellent Foster and we enjoyed that very much, but as the lake was too shallow for canoe trips and the rhino sanctuary no longer existed, hardly any of the advertised activities were available. As we were novice safari guests we weren't too bothered (it would've been an amazing experience for us no matter what we did), and Conrad was so good and we had such great trips with him and Foster this didn't matter too much but safari veterans or those with higher expectations might feel disappointed or even misled by the camp's website and the flyer in the Expert Africa info packs." See all these reviews: 9n in Zimbabwe
Experience Report
Overall Rating:
Excellent
Location:
Excellent
Service:
Excellent
Activities:
Good
Rooms:
Excellent
Food:
Good
Facilities:
Good
Ms TG
London

3 nights Arrived 16 Jul 2014
"The camp relies very much on the larger than life personality of its owner, Steve Edwards. I found him in excellent form, a passionate, extremely knowledgeable guide and a great raconteur. Having said that, the setting is outstanding in its beauty and the boat cruises are never less than agreeable. The camp itself is very comfortable affording each tent a degree of privacy. The staff are all extremely well trained, competent and welcoming. The food was good and plentiful.
I would have liked perhaps one game drive, but these were not available.

Please note also that according to Steve, the rhino breeding programme in Matusadona Park no longer exists.

However, we were surprised when we arrived to find there is an electric fence around the camp. This was not mentioned on the Musango website, and in Expert Africa's information only under 'Children' which we would have no reason to read (since amended). We were at Musango at high water and so saw no animals on the island, or from the island. Though we understand that the fence is there for safety reasons, we prefer a more wilderness experience, rather than being shut away from the animals. Hence the low rating for location.

Breakfast and afternoon tea were laid out on the upper deck for guests to help themselves. There were no guides or staff apart from in passing. In other camps we have been used to these being gathering times with the guides where we chat about the next activity. This creates a sense of anticipation and excitement which we missed here.

We did feel at times that Wendy and Steve's focus was distracted by other things, such as camp matters and local visitors with whom they had friends in common." See all these reviews: 11n in Zimbabwe
Experience Report
Overall Rating:
Average
Location:
Average
Service:
Excellent
Activities:
Average
Rooms:
Excellent
Facilities:
Excellent
EH family
SW London

2 nights Arrived 11 Apr 2012
"We had a really brilliant time during our 2 day stay at Musango.

Steve, Wendy, Graham and Robyn together with their team ( Conrad, Forest, Stacey, and their excellent fisherman) went out of their way to make sure we enjoyed our stay. we went on a boat visit to the local village, game safaris by boat, as well as fishing and lots of bird watching.

"Together with a legend"

3 nights Arrived 11 Sep 2011
"My fellow travellers and I had the great pleasure to spend all the time of our stay at Musango with owner and Zimbabwe legend Steve Edwards.

I enjoyed every minute of my stay at his camp: the rooms, the main area, the garden, the view over the lake, the pontoon boat cruises and game drive with exceptional sightings. Sunsets on Lake Kariba, you will never forget them..

Steve had so many stories to tell, funny and earnest, and for me, it was especially interesting to hear his opinion on Zimbabwe`s political future. Food was the best on my whole trip. Believe it or not, we even had Filet Wellington for dinner one night and the bream fresh from the lake was a real delight." See all these reviews: 10n in Zimbabwe
Experience Report
Overall Rating:
Excellent
Location:
Excellent
Service:
Excellent
Activities:
Excellent
Rooms:
Excellent
Food:
Excellent
Facilities:
Excellent
Dr G & Dr E
UK

3 nights Arrived 9 Sep 2011
"Fabulous camp and wonderful hosting by Steve. Upgraded to the honeymoon suite due to camp being empty.

Other lodges in Matusadona National Park

Secluded on an island on the shores of Lake Kariba, the simple Rhino Safari Camp offers great guiding and a combination of water- and land-based activities.

With beautiful views over Lake Kariba, Bumi Hills Safari Lodge is a place to relax, although there are also plenty of activities on offer.