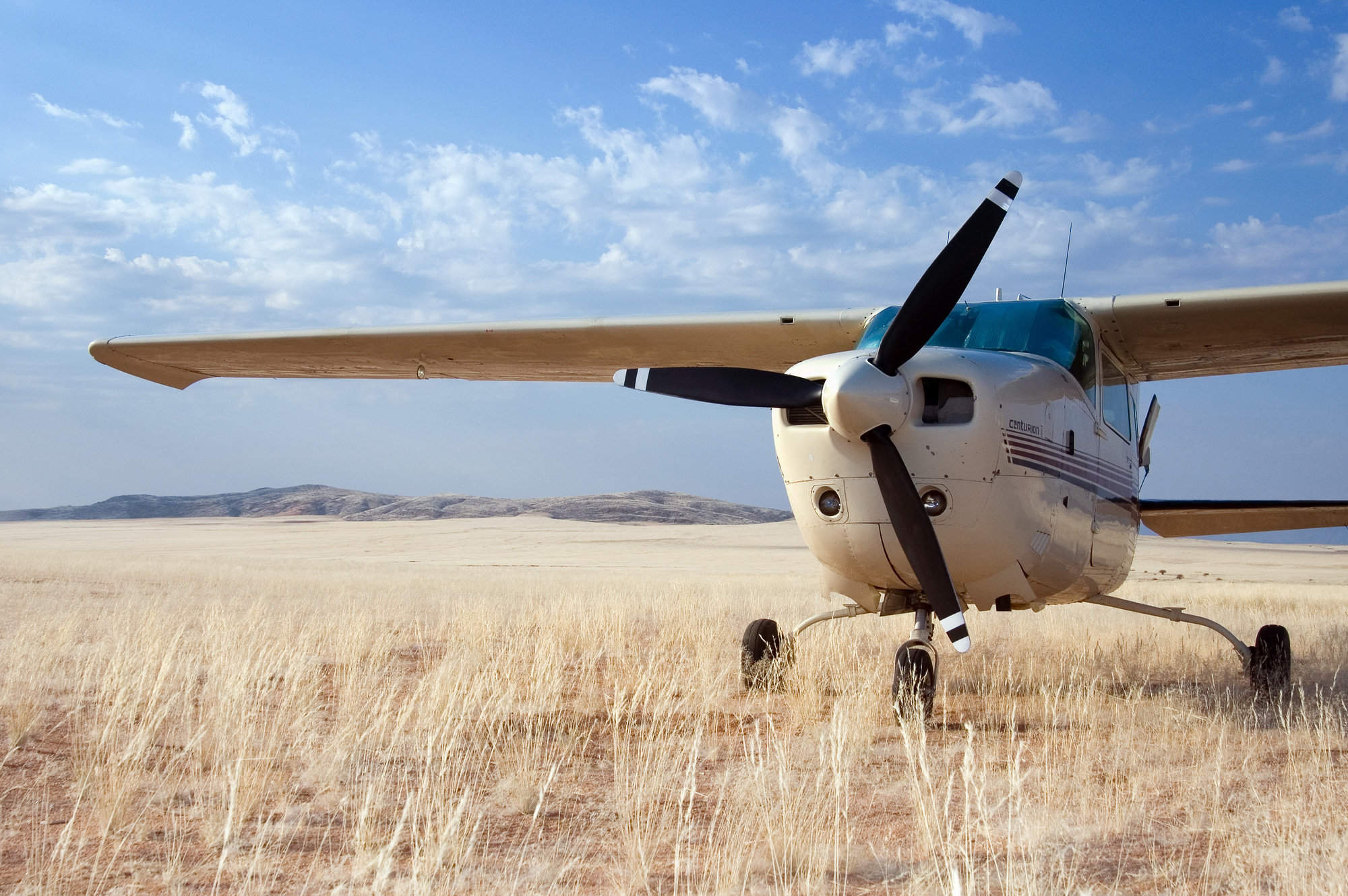 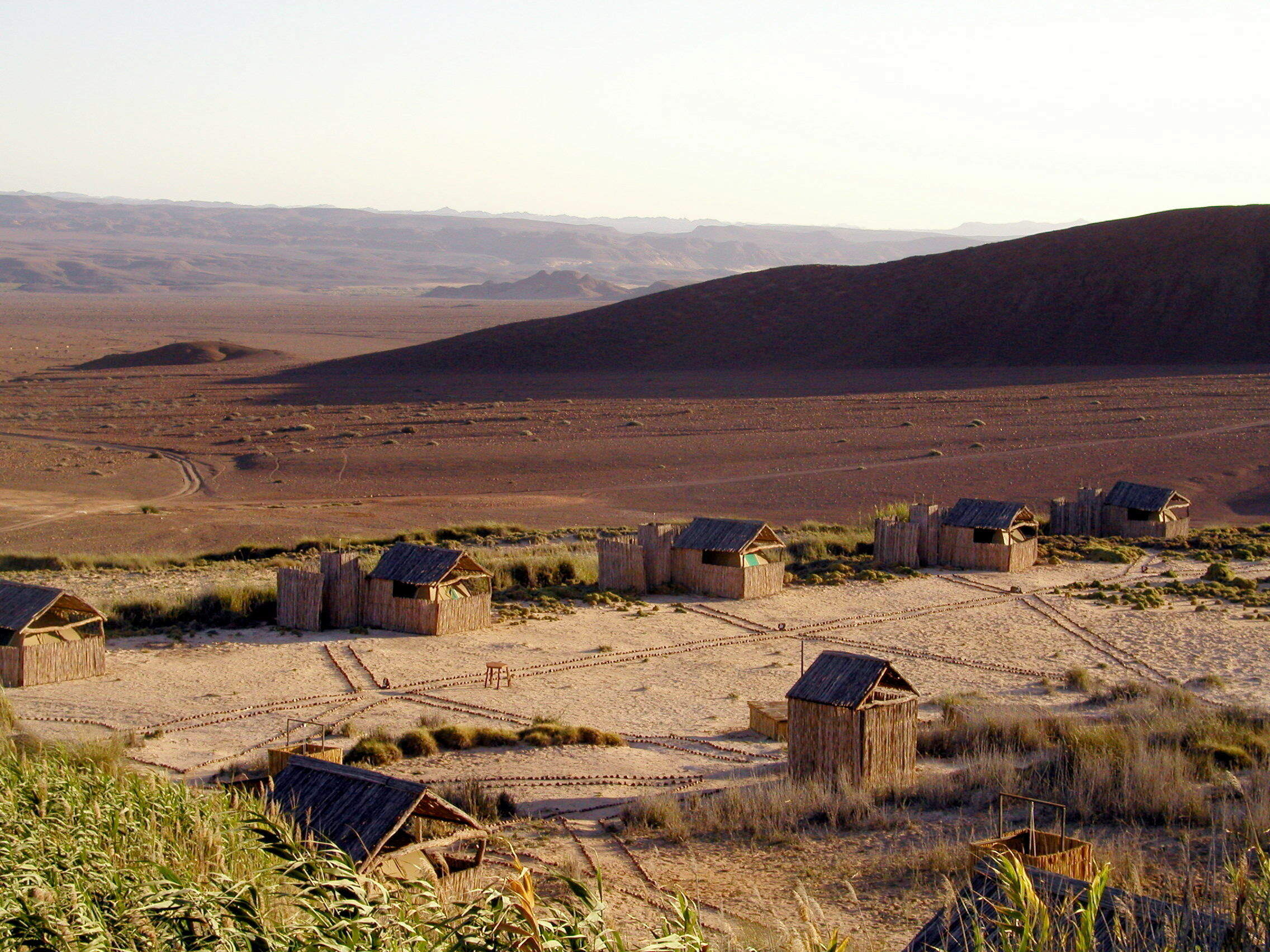 Leylandsdrift Camp is only accessible with the Schoeman's company, Skeleton Coast Safaris, - who run Expert ...

... Africa's Skeleton Coast Safari trip. It's normally used for the second night of one of these trips, which also visit Kuidas Camp and Kunene River Camp.

In May 2011, Leylandsdrift Camp was built to replace the original camp used by the Schoeman’s in this area; Purros Camp. Bordering the Skeleton Coast National Park the camp is approximately 19km west of the original Purros Camp.

Day two of our Skeleton Coast safari sees you fly from Kuidas Camp to Leylandsdrift Camp. You will fly along the coast and explore beaches and dune fields before arriving at Leylandsdrift for your sundowner drink around a central fire.

Leylandsdrift Camp is found in the heart of Kaokoland (Kunene region) about 40km from the village of Purros (Puros) itself. Being located on the banks of the ephemeral Hoarusib River, Leylandsdrift has great views over the river valley that is frequented by a variety of species including desert adapted elephant, a small lion population and more recently a small number of trans-located black rhino. Rhino sightings are rare but tracks can be spotted in the river clay.

The design of the camp is pretty simple; however it is comfortable and well equipped. Meals are served in the small central area and drinks are enjoyed around the warming evening fire.

Each new tent is raised up on a wooden deck and enjoys dramatic views down the valley. They have en suite bucket showers, a basin with fresh running water and flush toilets, as well as proper twin beds with white bedding, separated by a bedside table with mirror. A large battery lamp is provided, as well as bottled water and tissues. Within the reed boundaries of the tent are an en suite, hot bucket shower and a stone table with a bowl placed on it for washing your face and hands. Shampoo/shower gel is provided as well as insect-repellant cream and towels.

After breakfast, visitors usually set out to explore the beautiful river valley which offers a critical source of shade and water for many of the local wildlife species. The drives conducted in the Hoarusib River Valley also provide the opportunity to explore some of the more unusual features of the area which include towering clay ‘castles’. You will learn about the local flora and fauna, and often manage to observe the rare desert-adapted elephant that roam these dry river beds in search of food and water.

On our last visit we lucky enough to see several of these fascinating animals and also giraffe, and a troupe of chacma baboons foraging and playing by a spring. We also saw a variety of birds including the black-breasted snake eagle, scimitar-billed wood hoopoe, western red-footed falcon and the endemic Monteiro’s hornbill.

This area is also home to the nomadic Himba community and you may visit the nearest settlement where you will be told about their traditions and culture, which are unfortunately slowly disappearing. However, generally, Himbas are more often met on an excursion from Kunene River Camp.

After lunch here on the third day of your Skeleton Coast Safari, you will usually depart for Kunene River Camp.

Leylandsdrift Camp is a simple yet comfortable camp, however the Skeleton Coast safari is very much about the guiding and experience than the camps you stay at.

Usual board basis
Full Board & Activities
Food quality
The quality of food on the Skeleton Coast Safari, on our last visit, was very good and the wine on offer of a good standard.
Breakfast is a buffet style with a choice of freshly baked bread with jam, cheese, meats etc., cereal, yoghurts and maize porridge.
The buffet lunch offers the visitor a selection of cold dishes with a notably good potato salad.
Dinner, when we were last there, was a great selection of barbequed food accompanied by potato salad and green salad.

Photography holidays
Fly-in safaris lend beautifully to photography. Views of the varied landscapes are stunning from the air at ground level you will usually get the opportunity to photograph the desert-adapted elephant near Leylandsdrift Camp and the Himba people in the settlement close by.
See ideas for Photography holidays
Wildlife safaris
The Hoarusib River valley, in which Leylandsdrift Camp is situated, is a great place to track desert-adapted elephant. The vegetation and natural springs in the area act as magnets for these wonderful animals, as well as other desert dwelling species.
See ideas for Wildlife safaris

Attitude towards children
The Schoemans are happy to accept children on this safari.
Property’s age restrictions
All ages are welcome on this trip.
Generally recommended for children
Although all ages are accepted on this safari, very young children may find it is quite tiring as it involves a lot of activities and flying.
Notes
In order for the Schoemans to make any necessary arrangements, children's ages need to be notified in advance.

Disabled access
Not Possible
Laundry facilities
Laundry can be done if you require it urgently.
Accepted payment on location
Cash is only needed to tip camp staff and for buying souvenirs at Himba village.