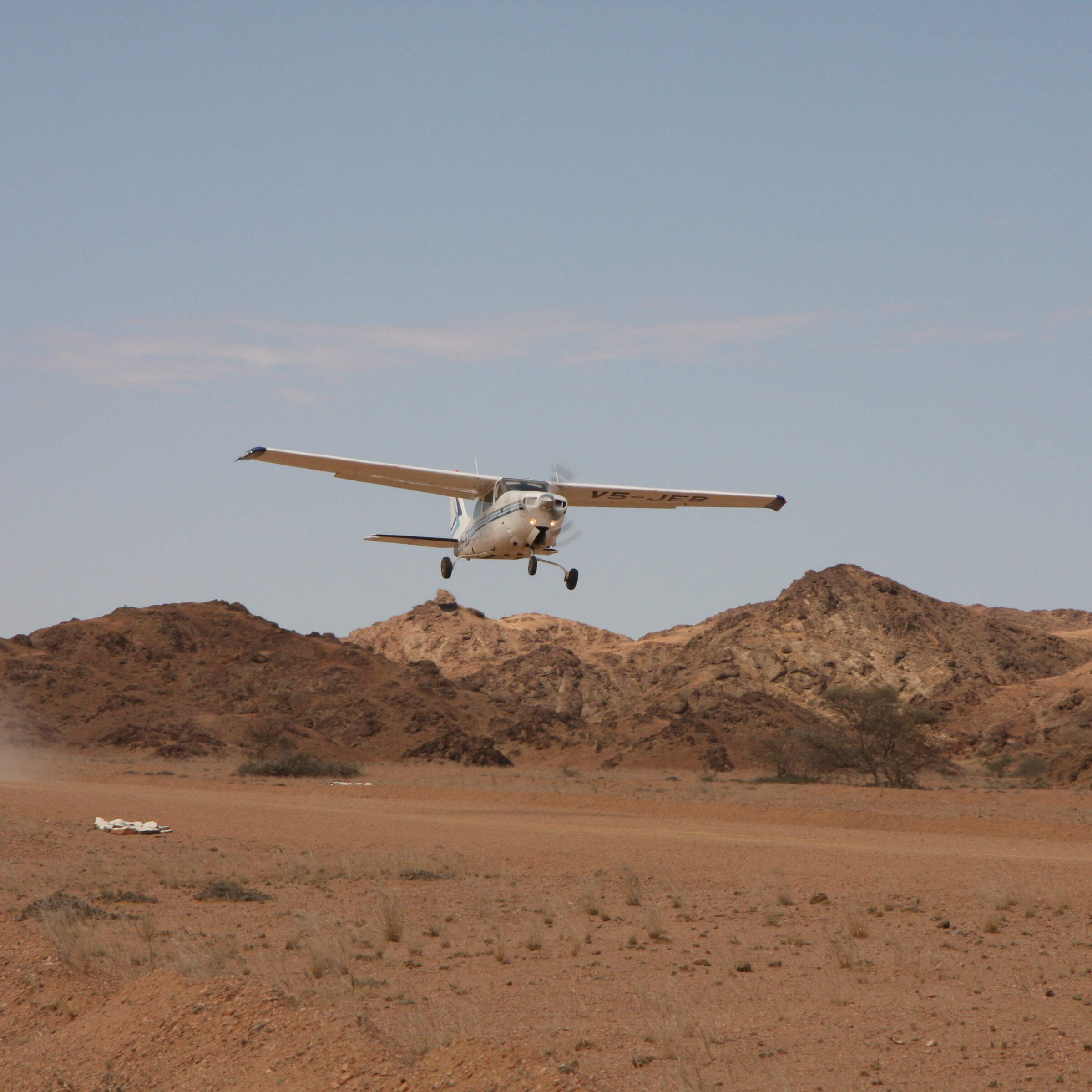 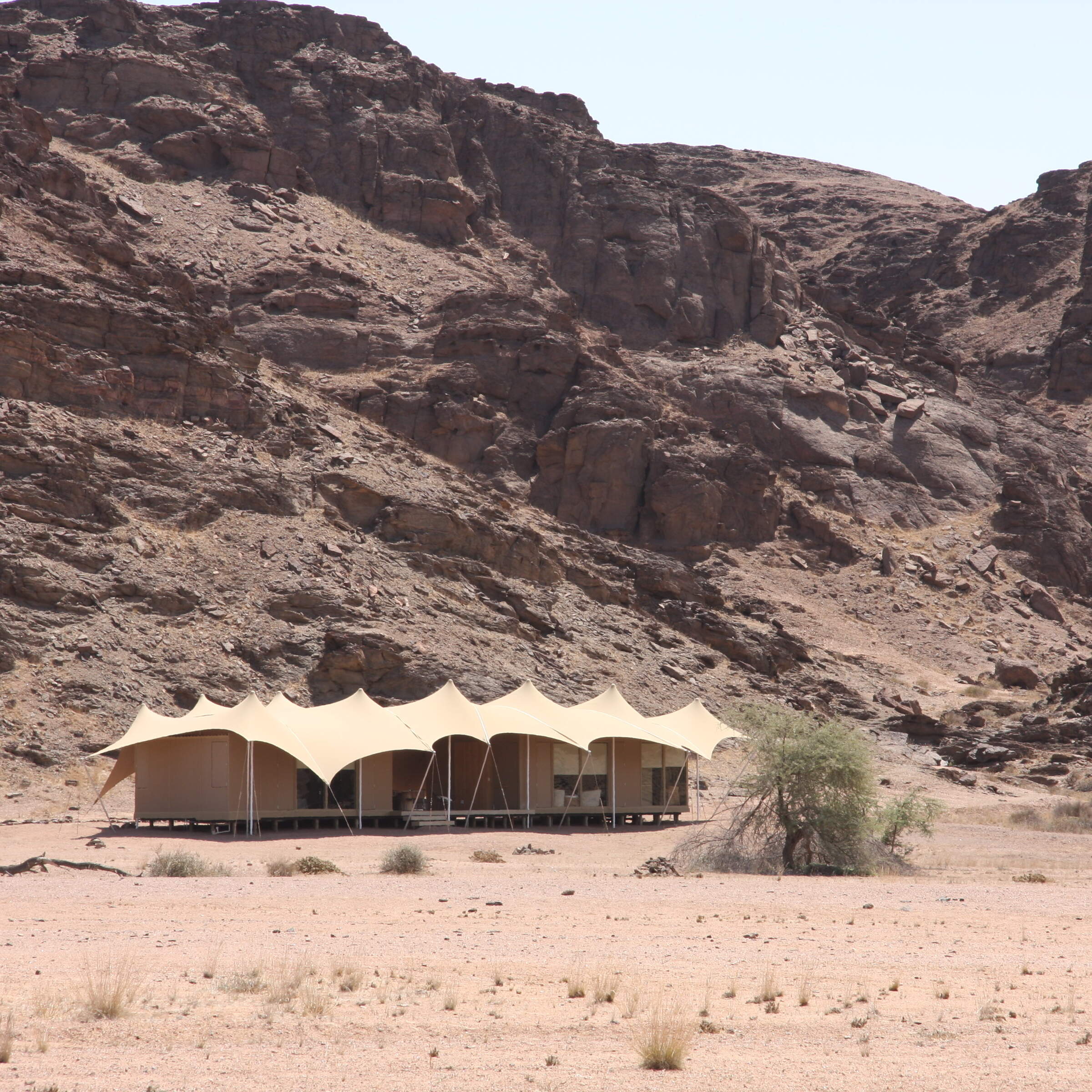 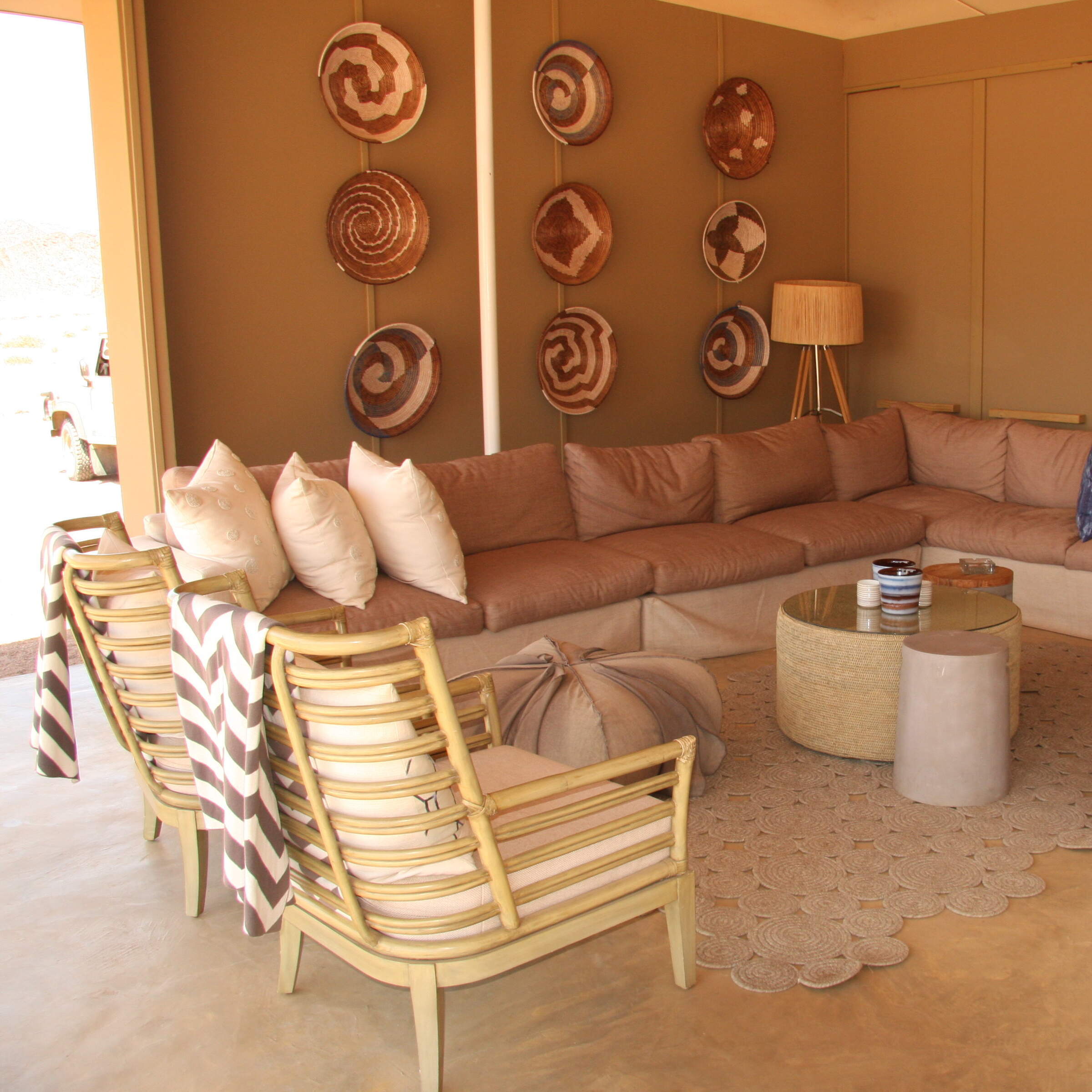 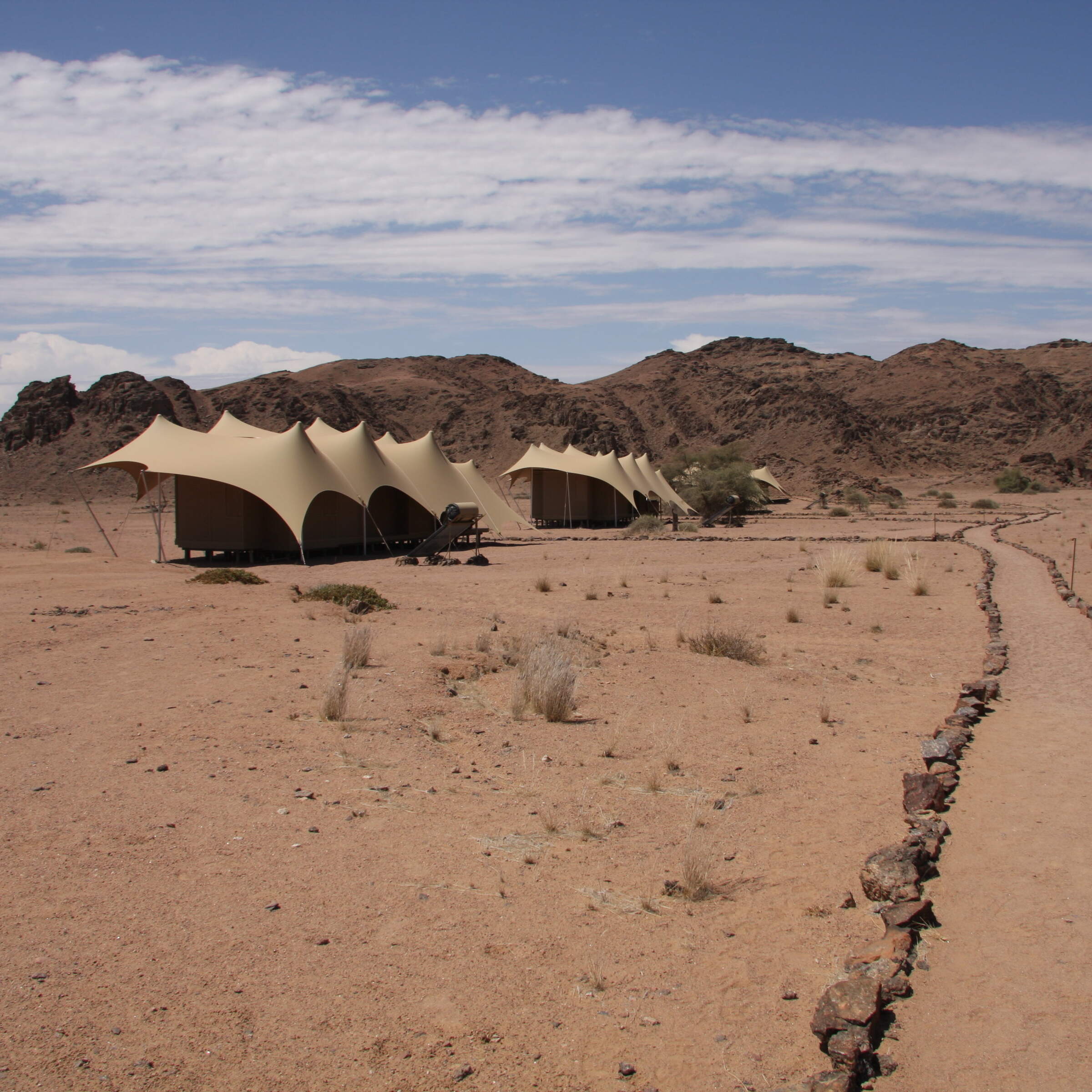 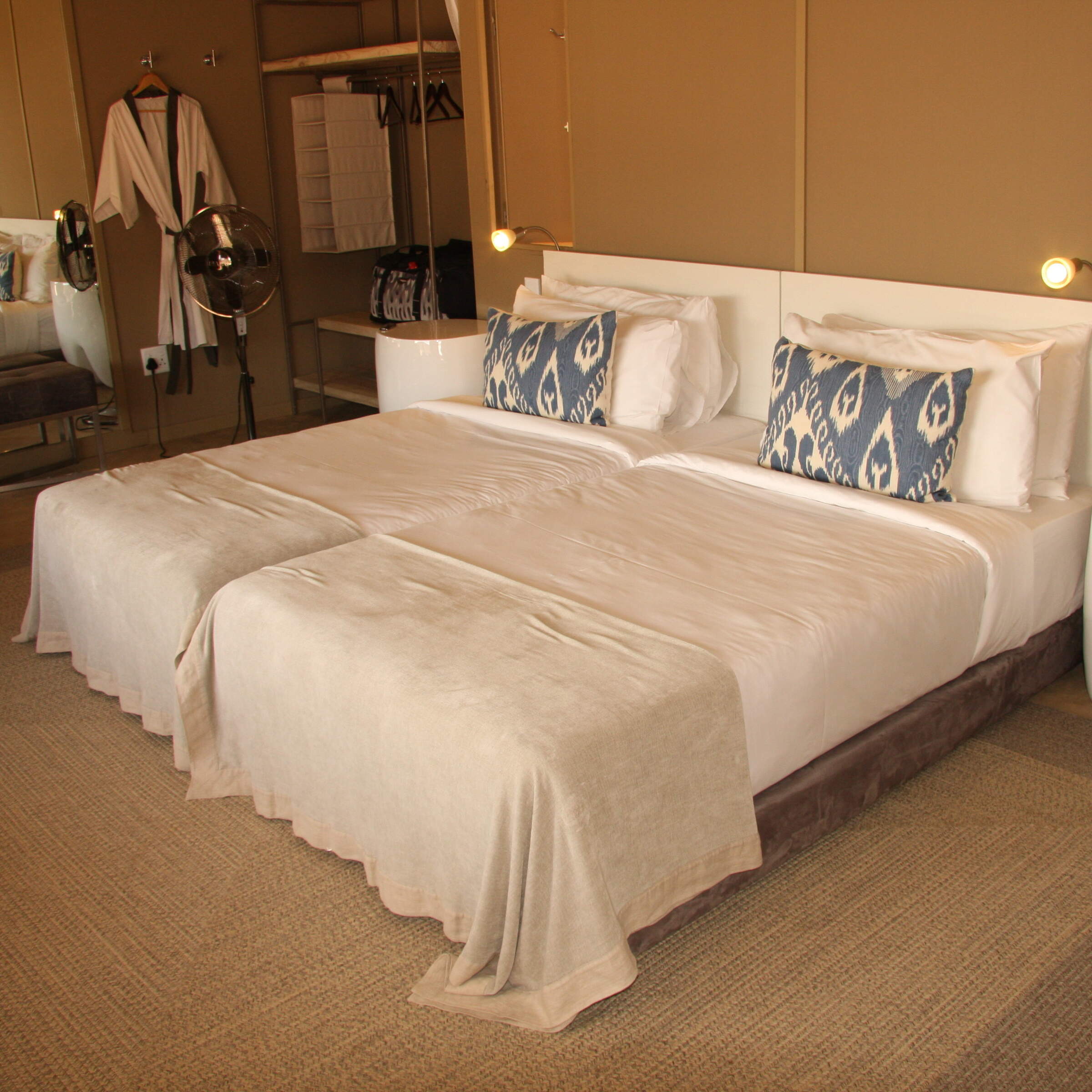 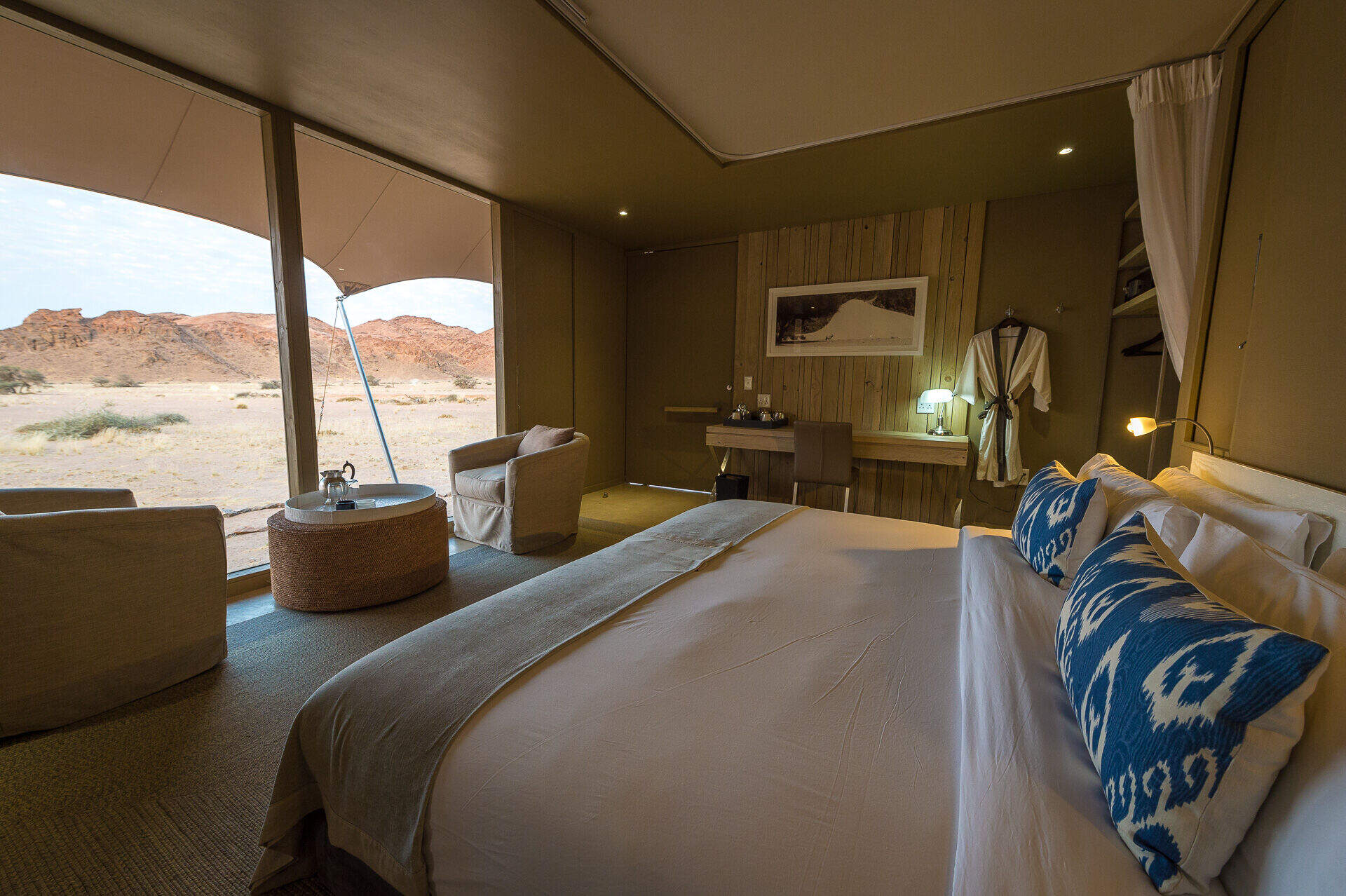 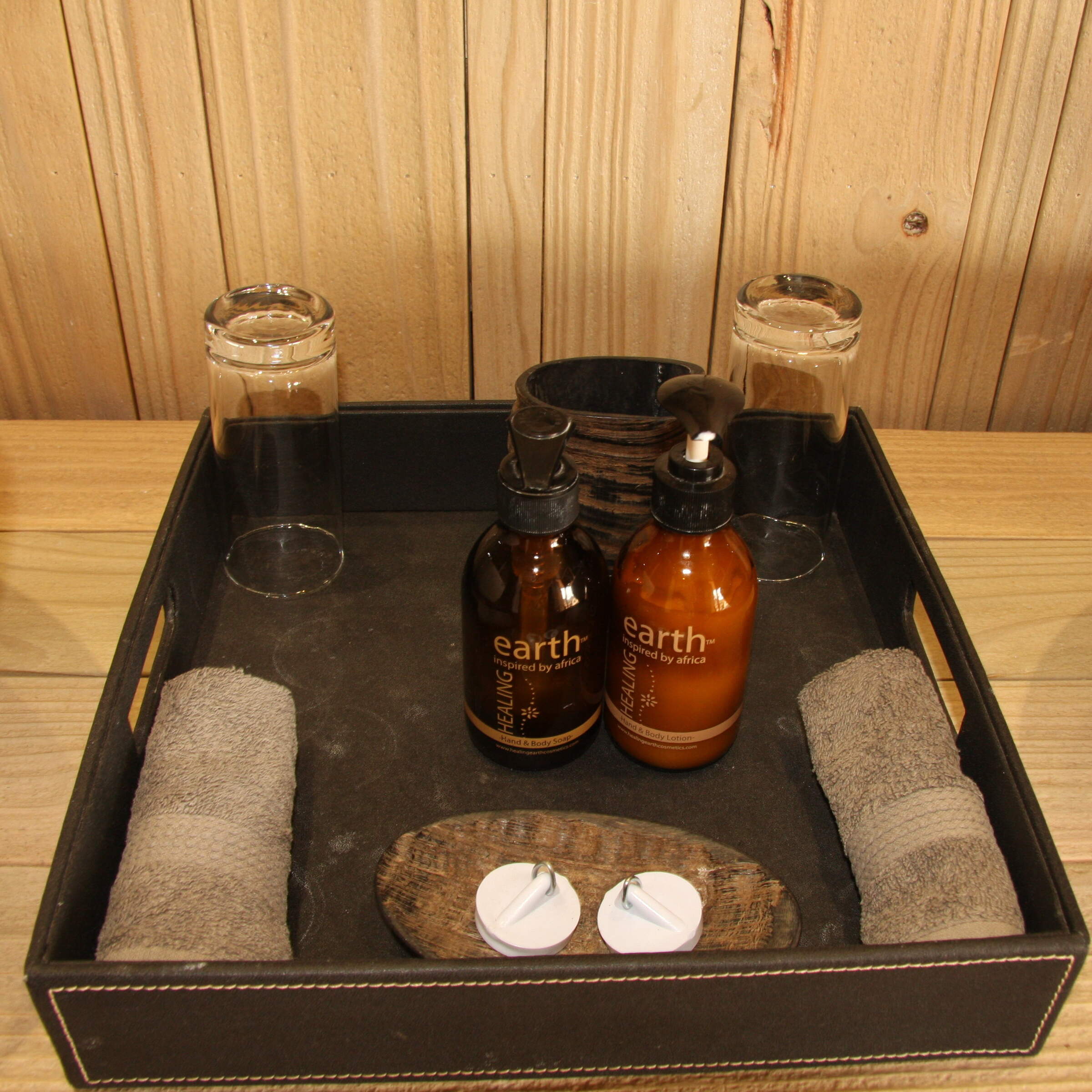 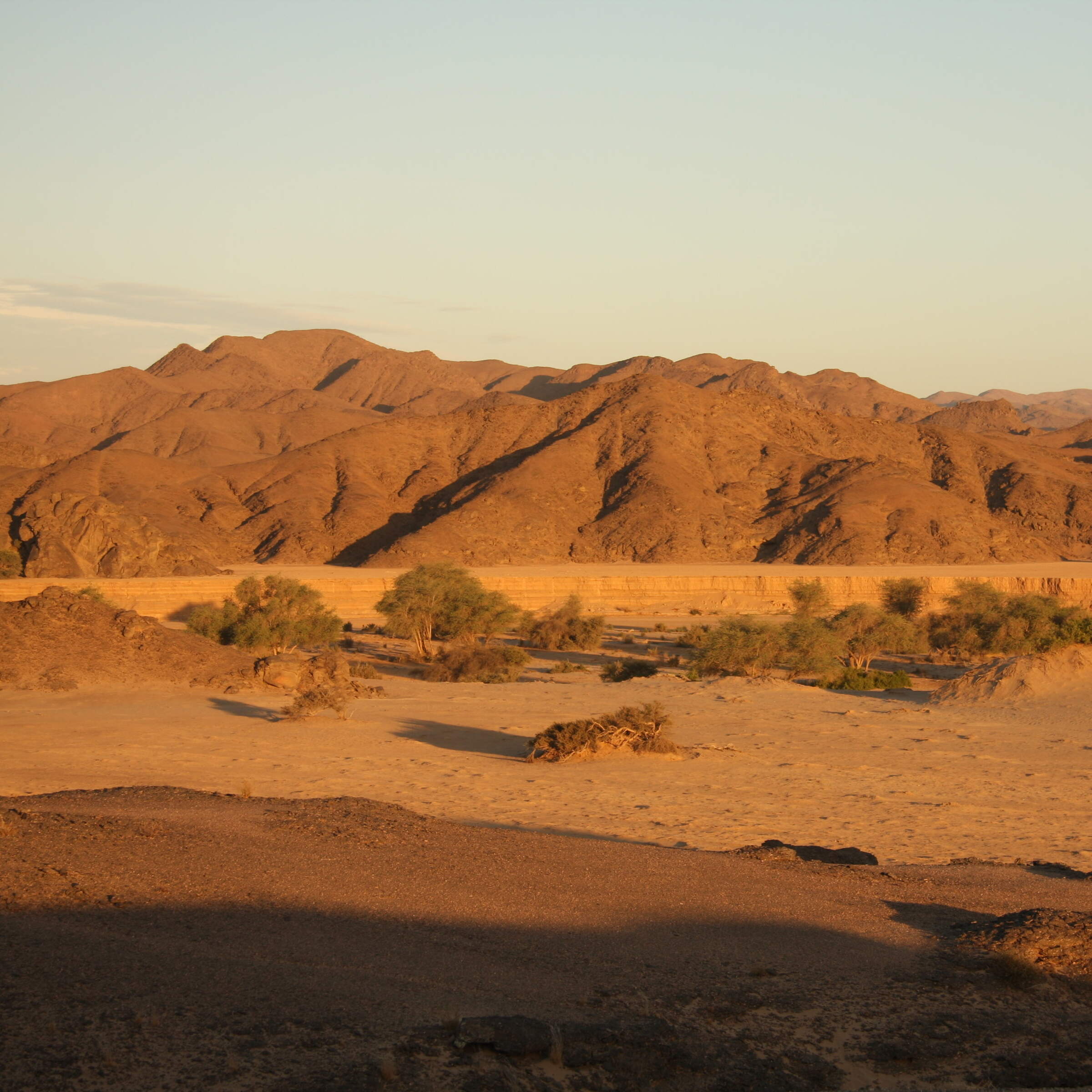 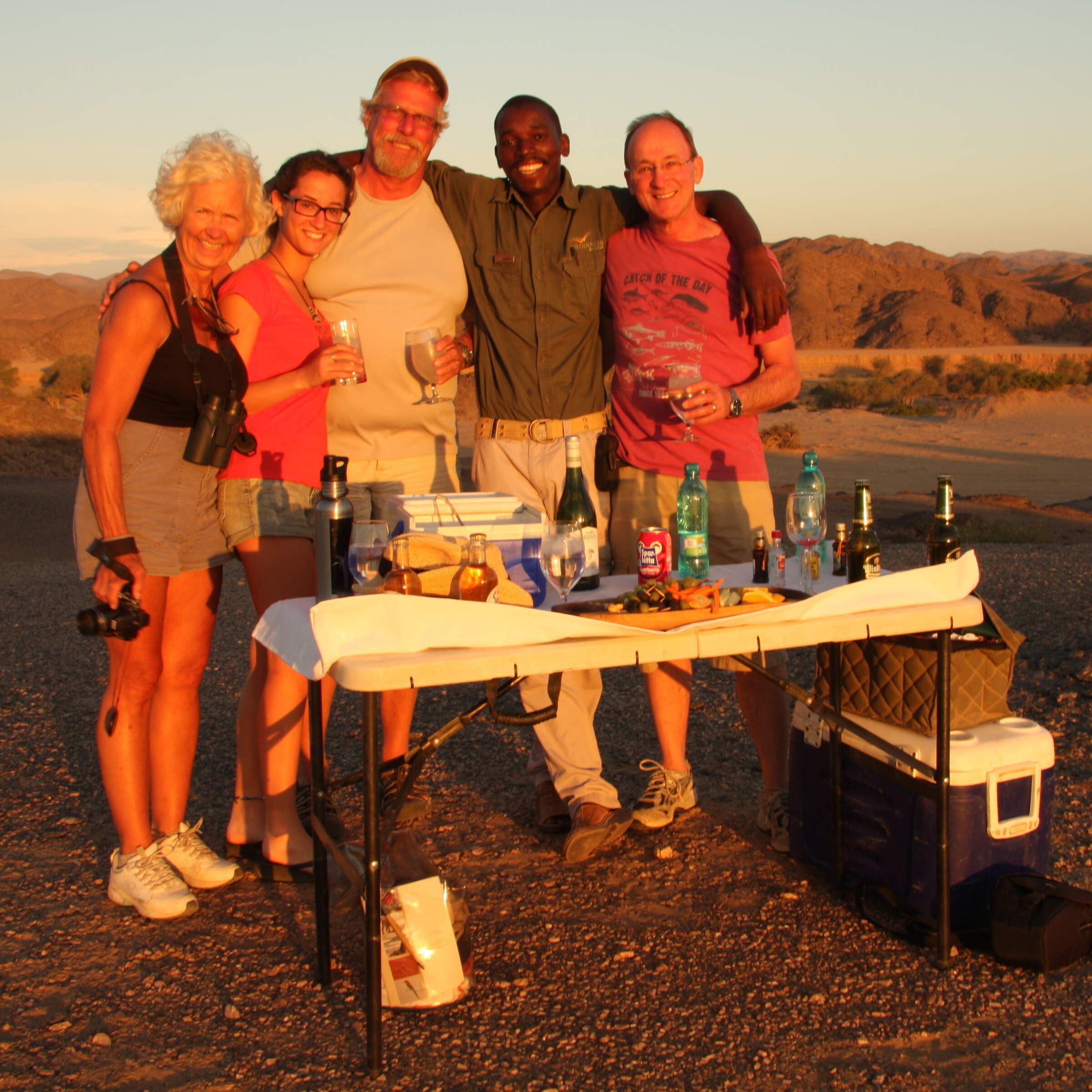 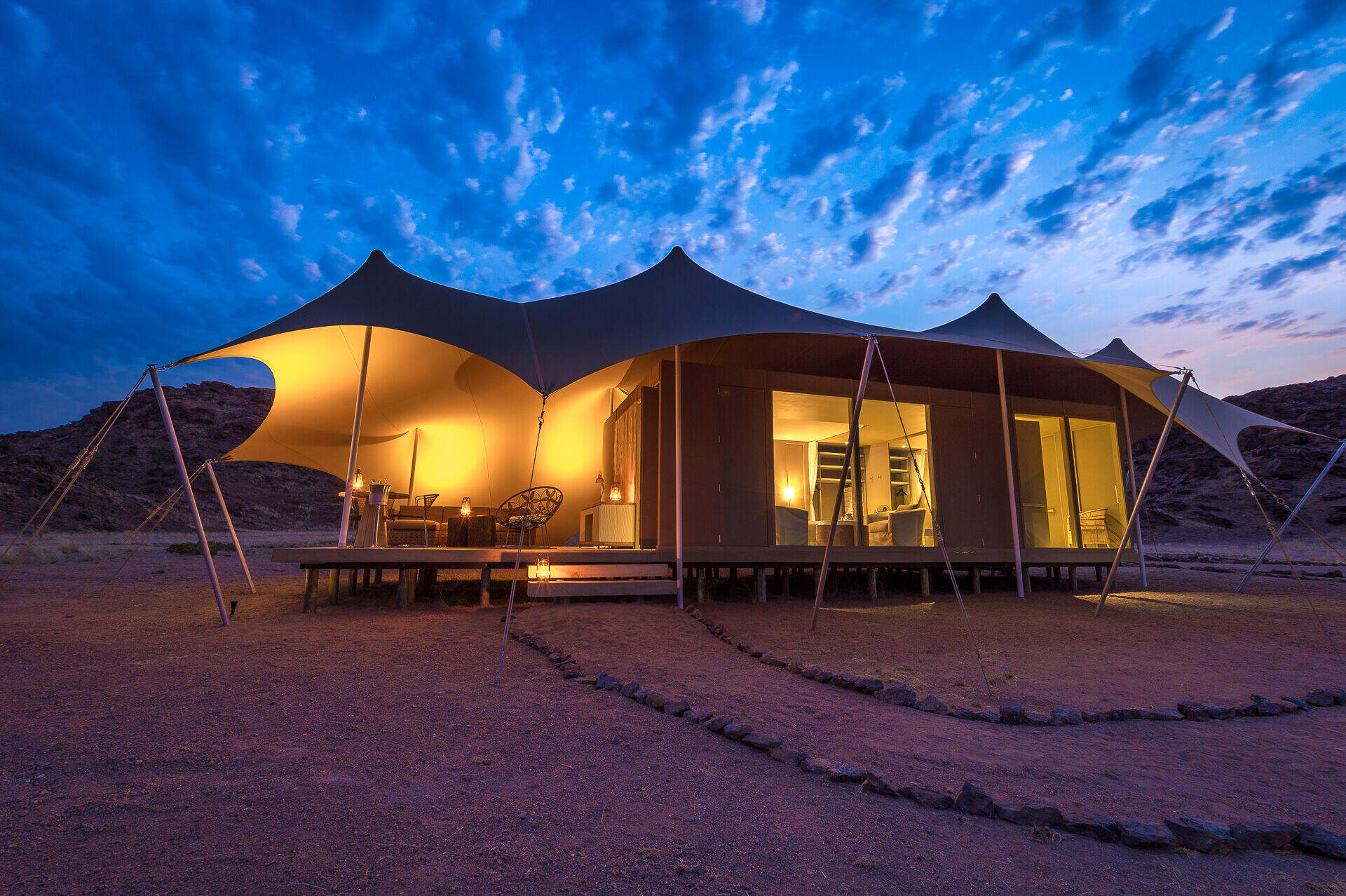 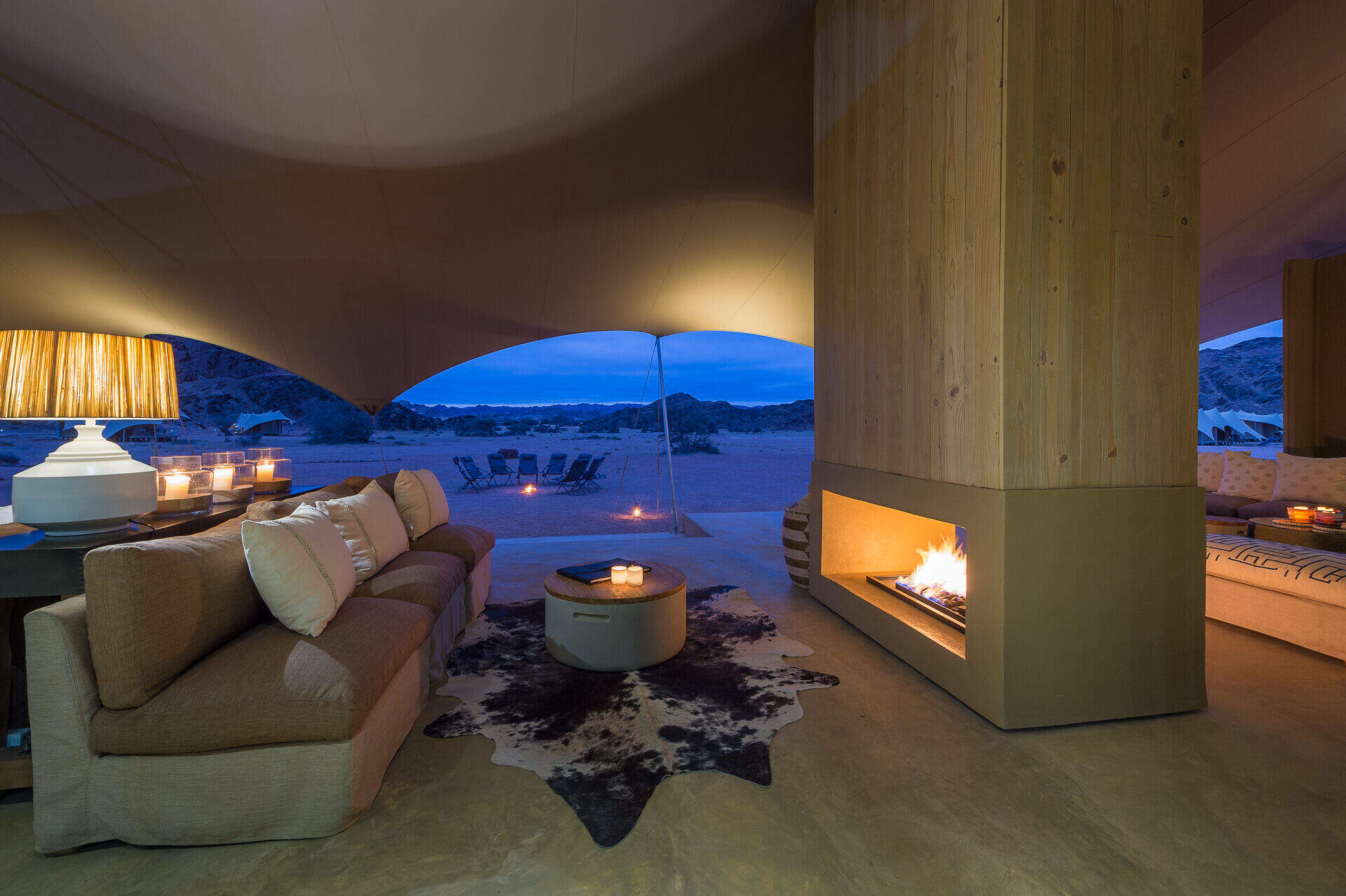 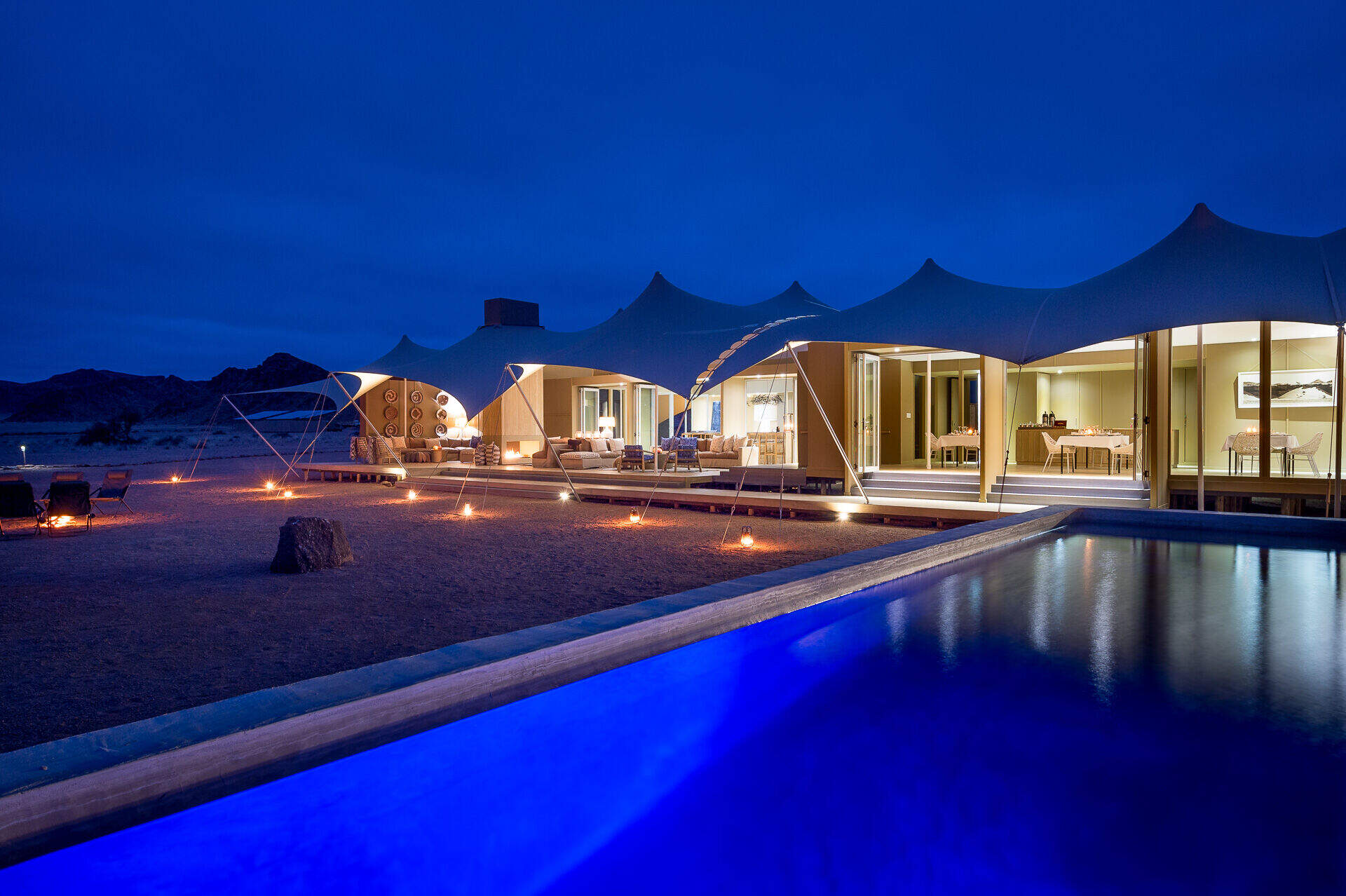 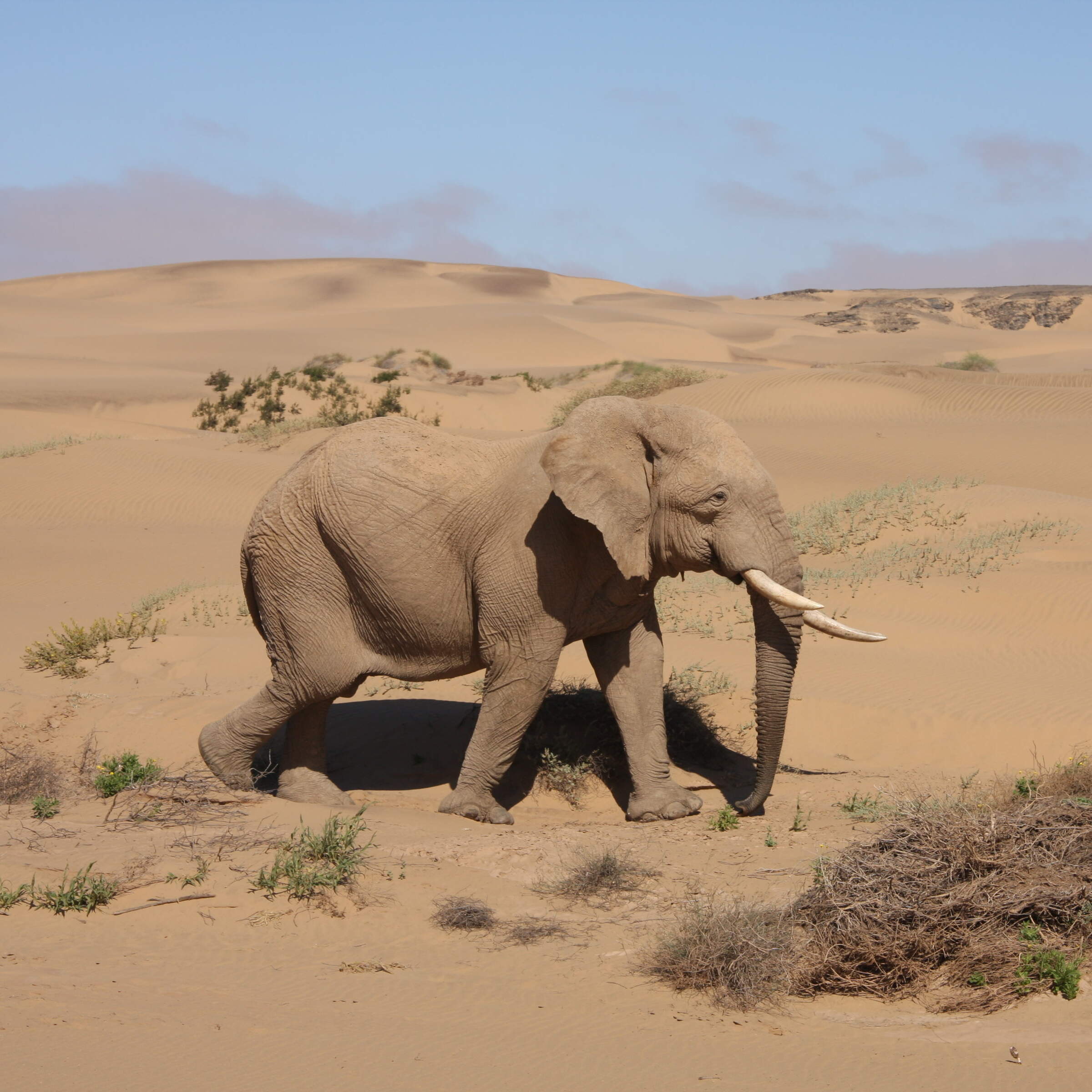 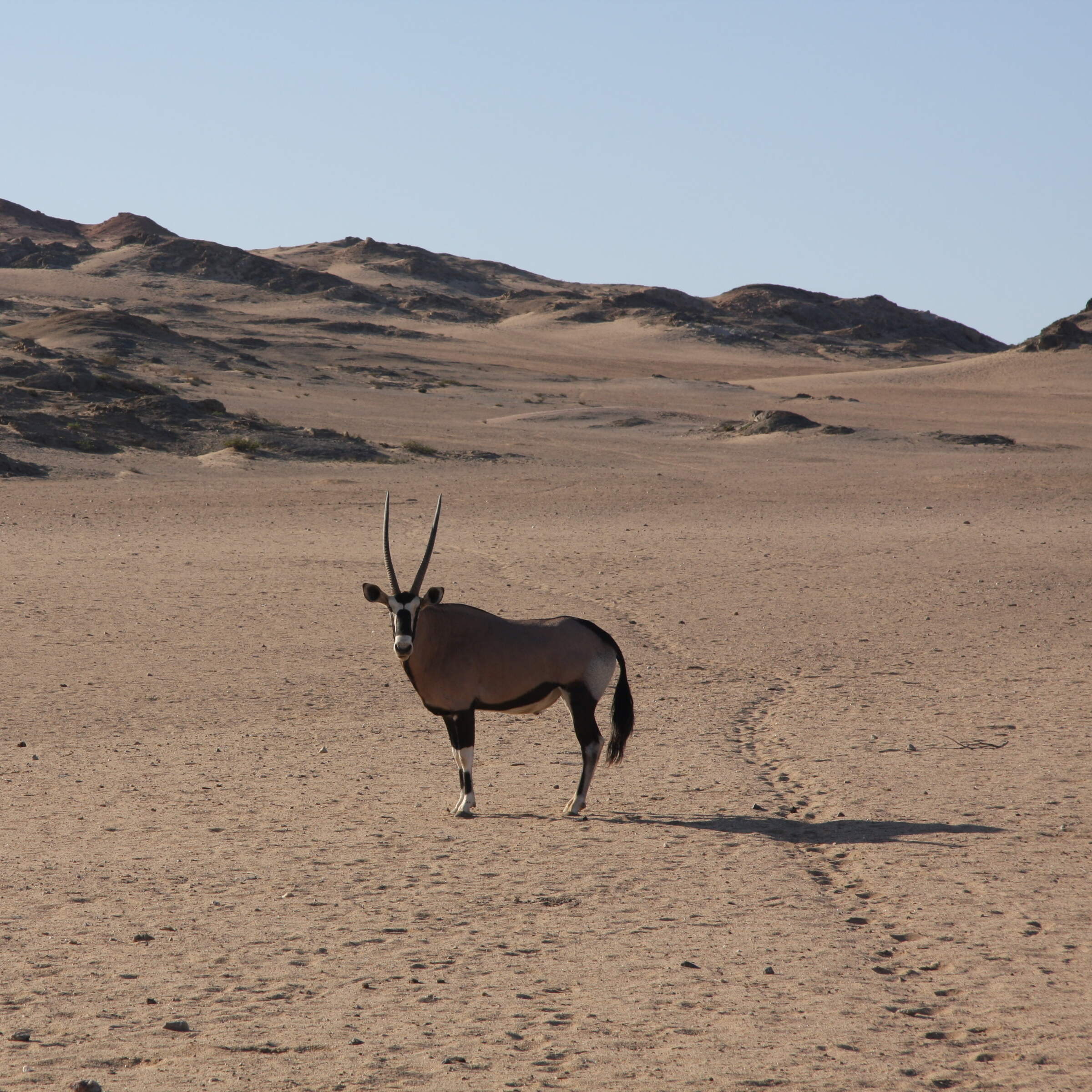 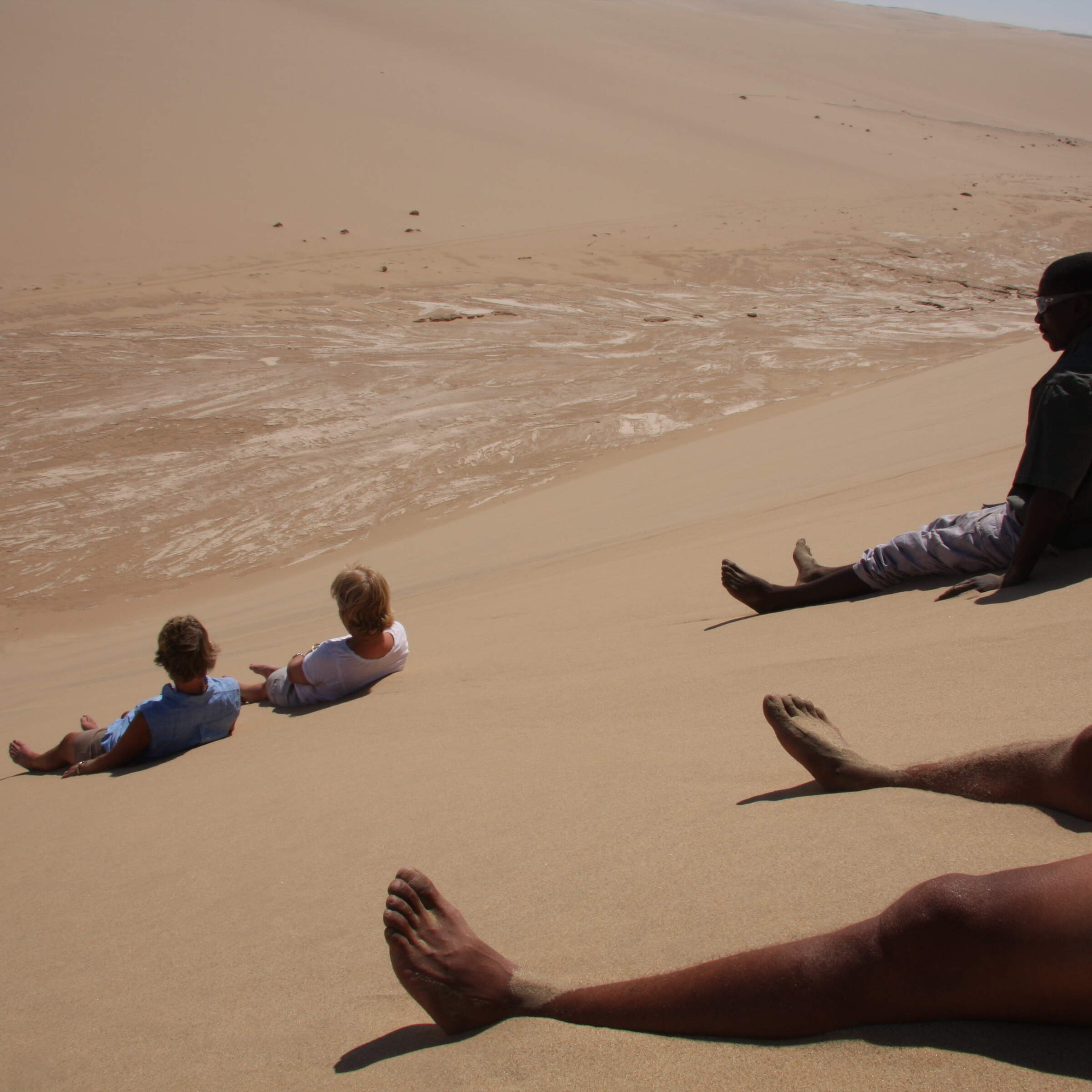 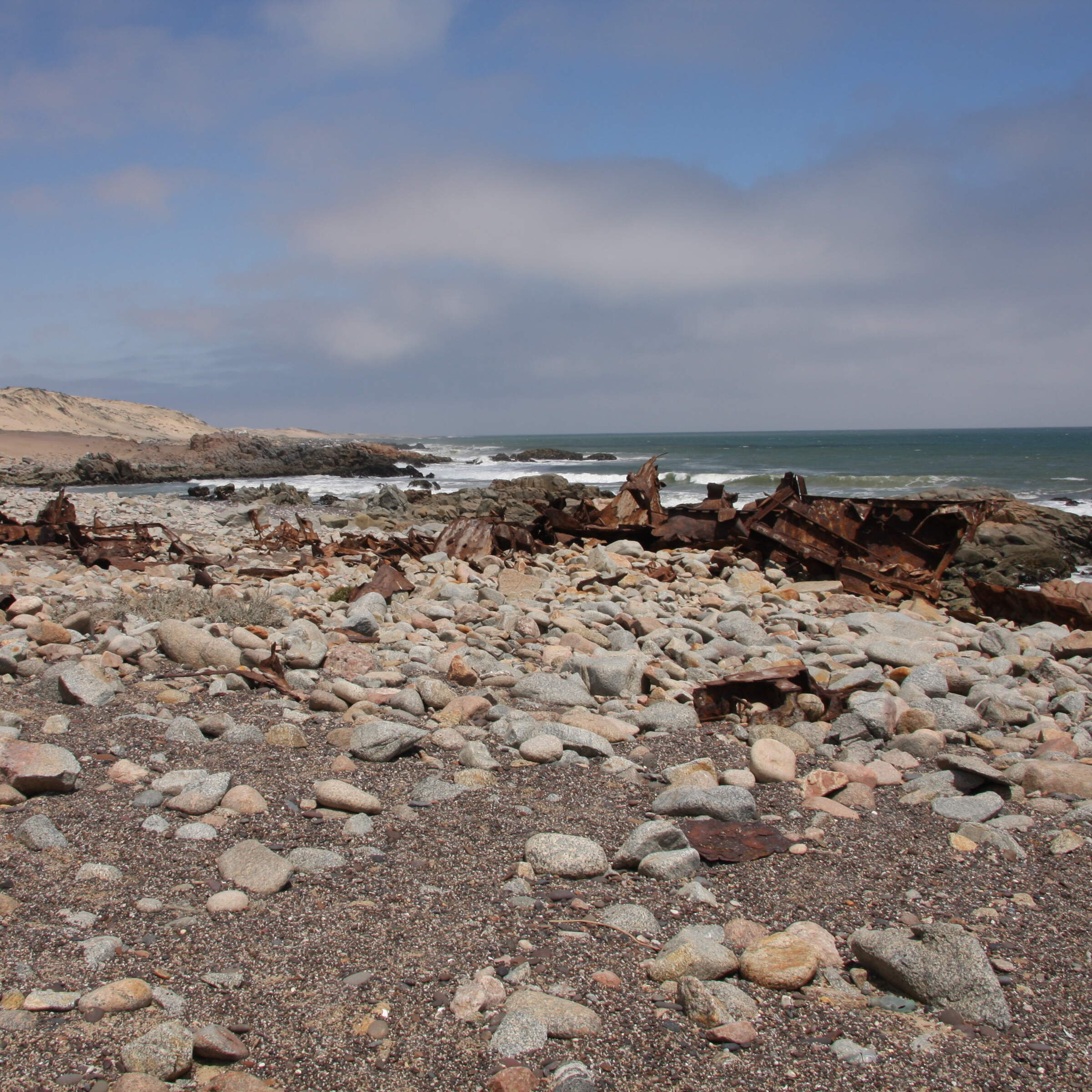 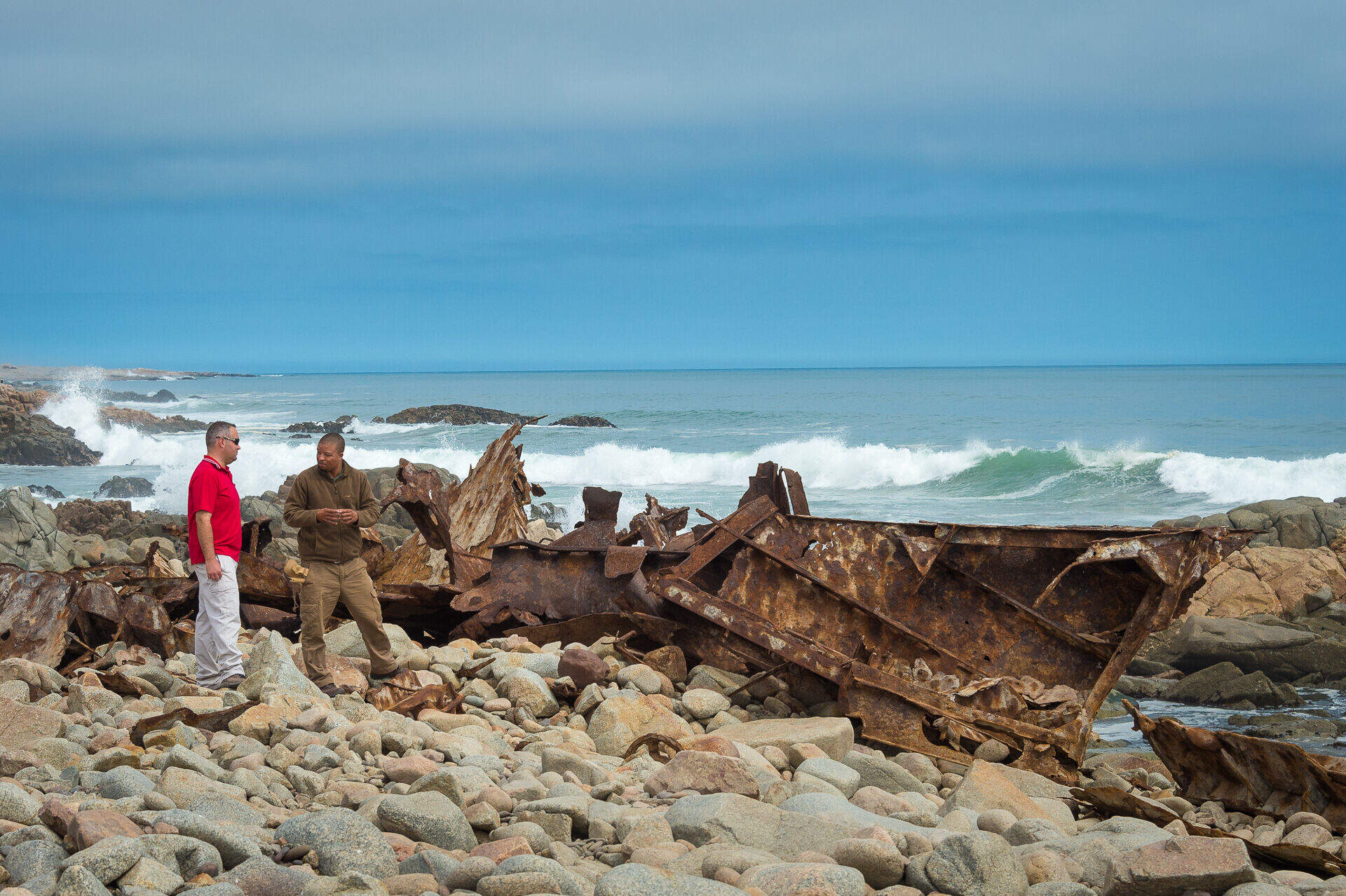 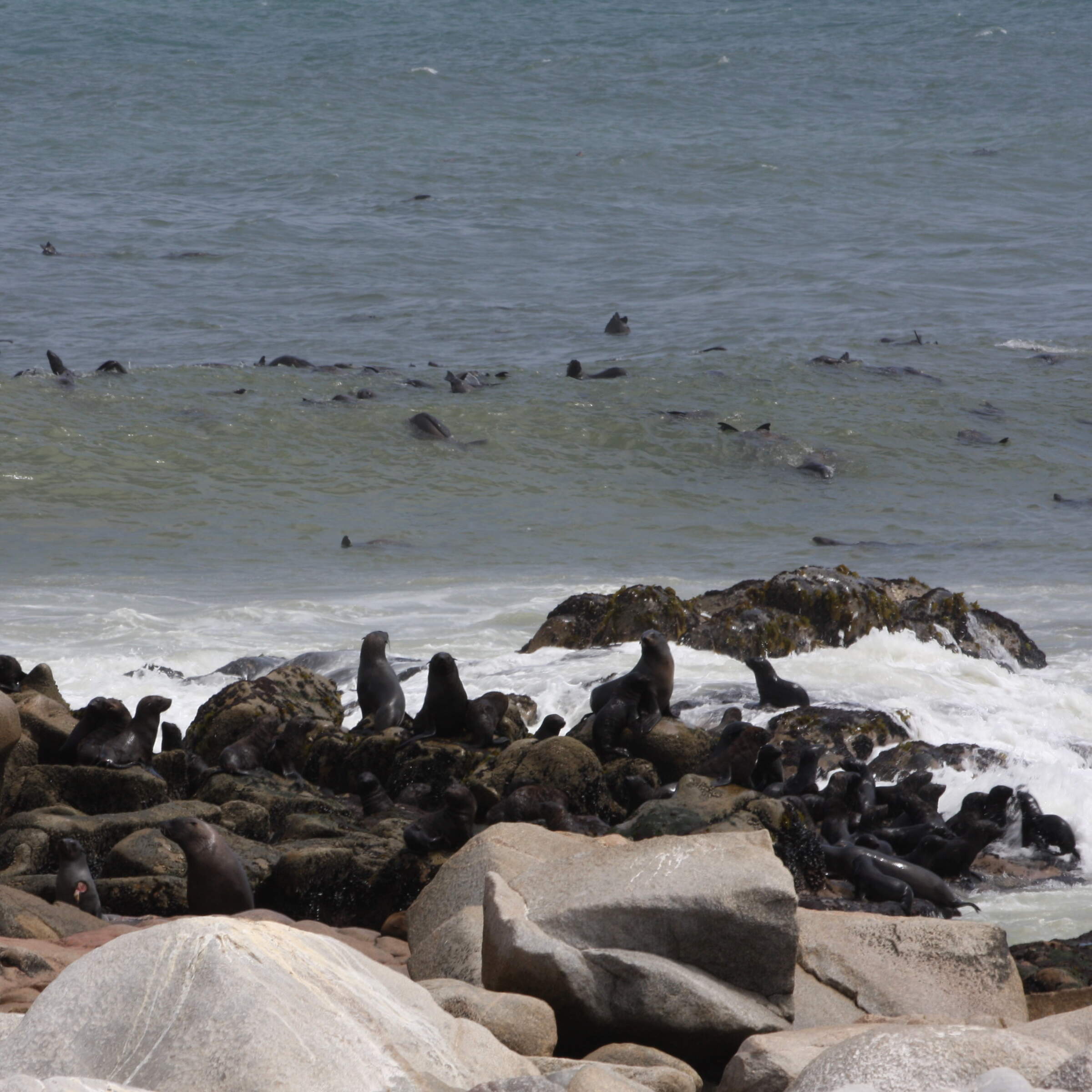 33 independent comments and wildlife information from our travellers who have visited Hoanib Skeleton Camp and kindly agreed to share their thoughts. They do not necessarily represent the views of Expert Africa

3 nights Arrived 17 Feb 2019
"We felt we were on the moon, landscape spectacular. Very clean and comfortable accommodation, food excellent and staff very pleasant and helpful.

Really good guide and enjoyed our safari trips, especially the one down to the Atlantic coast where we had lunch on the beach.

Lots of elephants, giraffe, oryx etc. No lions as not in the area.

Mr and Mrs A.
Chobham

"Fantastic safari to the coast"

We set off on the 4 hour safari with trepidation due to the the length of time but absolutely loved the trip with the diversity of the land and the wildlife seen. Very special.

3 nights Arrived 5 Oct 2018
"The landscape is stark, but the lodge and rooms are far from that. This is the most striking Wilderness Safaris camp we have stayed at. The camp design is other worldly and accommodations luxurious. Rooms are very large and comfortable with views over a wide valley. En-suite bathroom includes double sinks, large open shower and separate toilet. Each "tent" includes a large, raised, covered stating area that includes a sofa, table and chairs and an outdoor refrigerator.

A highlight of this trip is a drive along the Hoanib River bed to the Skeleton Coast. The landscape changes constantly during the several-hour drive. The ocean along the skeleton coast is spectacular. I could have done without the stinky visit to the fur seal colony.

Evening and morning game drives along the Hoanib River bed were really beautiful and we saw many more animals than we expected. We saw all three of the resident elephant families, many oryx, a large tower of giraffe (that happened to amble by during one sundowner) and steenbok. We also enjoyed a presentation by a local brown hyena researcher. This camp has so much to offer." See all these reviews: 19n in Namibia
Experience Report
Overall Rating:
Excellent
Location:
Excellent
Service:
Excellent
Activities:
Excellent
Rooms:
Excellent
Food:
Excellent
Facilities:
Excellent
Sightings Report

3 nights Arrived 21 Sep 2018
"Hoanib Skeleton Coast Camp is stylish and luxurious but in my opinion lacked the atmosphere and hosting of the smaller bush camps.

However the location is wonderful and the activities really gave an insight into the arid, harsh landscape.

"Hoanib was a highlight of our Namibian trip"

3 nights Arrived 20 Sep 2018
"We could not fault Hoanib Skeleton Coast Camp.The flights too and from where great. Very friendly staff All activities were in a comfortable vehicle with just one other couple. Our tent which was very luxurious and food was really good food, Harunga was a very pleasant and knowledgeable guide.

Our day trip drive to the coast was amazing as you went along the river bed to the marshes, then the sand dunes with the oasis coming out to the coast with its ship wreck, museum and seal colony. this was followed by a good lunch before a low level flight back to the camp.

The game viewing was far better than expected with desert lion, desert elephant, numerous giraffes (Including two fighting) and lots of jackals made better by having Harunga with us who was a great guide" See all these reviews: 22n in Namibia; 2n in Botswana
Experience Report
Overall Rating:
Excellent
Location:
Excellent
Service:
Excellent
Activities:
Excellent
Rooms:
Excellent
Food:
Excellent
Facilities:
Excellent
Sightings Report

3 nights Arrived 7 Dec 2017
"Simply stunning location, accommodation and public areas. the one thing that let them down greatly was the food.

Breakfast was fine but lunch and dinner were poor comparison with previous lodges we had stayed at.
We were not only ones who felt that way." See all these reviews: 18n in Namibia
Experience Report
Overall Rating:
Good
Location:
Excellent
Service:
Good
Activities:
Excellent
Rooms:
Excellent
Food:
Poor
Facilities:
Excellent
Feedback Response
We were disappointed to hear this feedback regarding the quality of the food at Hoanib Skeleton Coast Camp and that this prevented what could have been a near perfect stay. After forwarding these comments to the lodge, they have told us that the food and beverage manager is in the process of implementing new measures and new training of the kitchen team with the aim of improving the food standard and quality on a daily basis.
J & K
London

3 nights Arrived 24 Sep 2017
"What a fantastic lodge, cleverly built into the rocks. We were upgraded to the only suite for the one night we were there, which was a wonderful treat. Elevated accommodation with a vast bedroom and lounge area, outside bath with a private view and large decking area. We were hot and tired after a long drive and decided to postpone sightseeing to make the most of it (plus the all inclusive bar) .

The food was delicious, as we found throughout our visit to Namibia. The only thing we would have liked in hindsight was a mosquito net. The mosquitos were a bit pesky despite the insect repellant and 'Doom' spray, and I got quite badly bitten. That aside we would have loved to have stayed longer." See all these reviews: 18n in Namibia
Experience Report
Overall Rating:
Excellent
Location:
Excellent
Service:
Excellent
Activities:
Excellent
Rooms:
Excellent
Food:
Excellent
Facilities:
Excellent
Ms M
Ottawa

The day trip to the coast is well worth.

We also enjoyed that we could go on walks at this camp.

"The smartest of the camps"

2 nights Arrived 9 Sep 2017
"The camp is the best equipped of those I stayed in, being the newest, and there was an excellent range of wildlife seen on the game drives. However, I was disappointed to find that an excursion to the Skeleton Coast (described as a highlight by people I spoke to) was only offered as an optional (and expensive) extra to guests not staying three nights. As a result, and since I refused, on principle, to pay the extra amount, I found myself on a final game drive which closely resembled a previous one and which meant that my overall level of satisfaction was a little below earlier expectations.

This arose because the couple I had been with chose not to go out on the final afternoon and this, in turn, triggered a sudden, (strategic?) illness in our guide, leaving me to join a newly-arrived couple, without any advance notice. This was the only time in the Wilderness camps that my status as a single traveller left me feeling slightly spare, possibly not unrelated to the fact that the (excellent and very enthusiastic) camp manager and her husband had earlier left, on their leave." See all these reviews: 14n in Namibia
Experience Report
Overall Rating:
Excellent
Location:
Excellent
Service:
Good
Activities:
Good
Rooms:
Excellent
Food:
Excellent
Facilities:
Excellent
Showing 1-10 of 33
1234
Next
99%
33 reviews of Hoanib Skeleton Camp by travellers since August 2007
Overall rating by our travellers
32
1
0
0
0
Filter by month