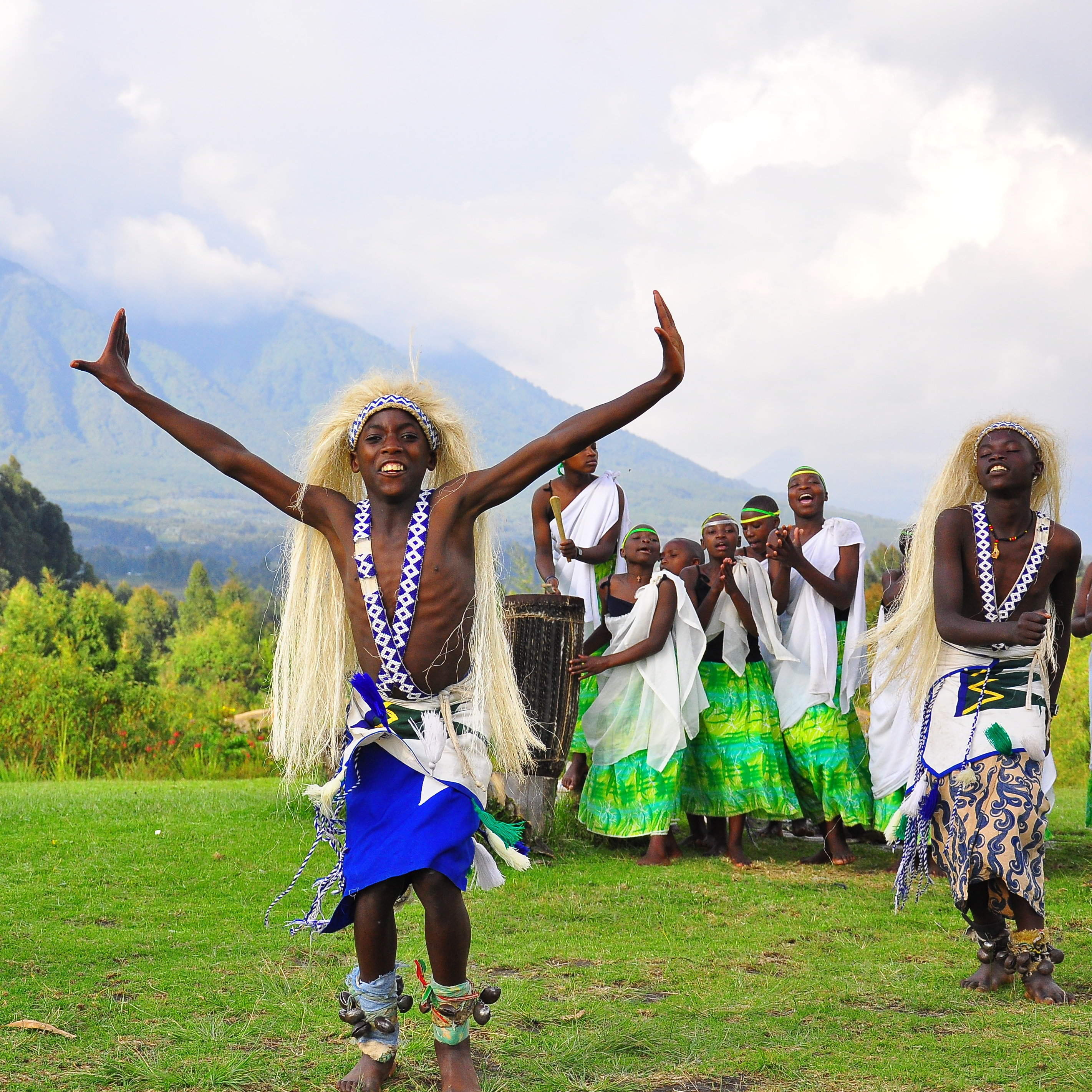 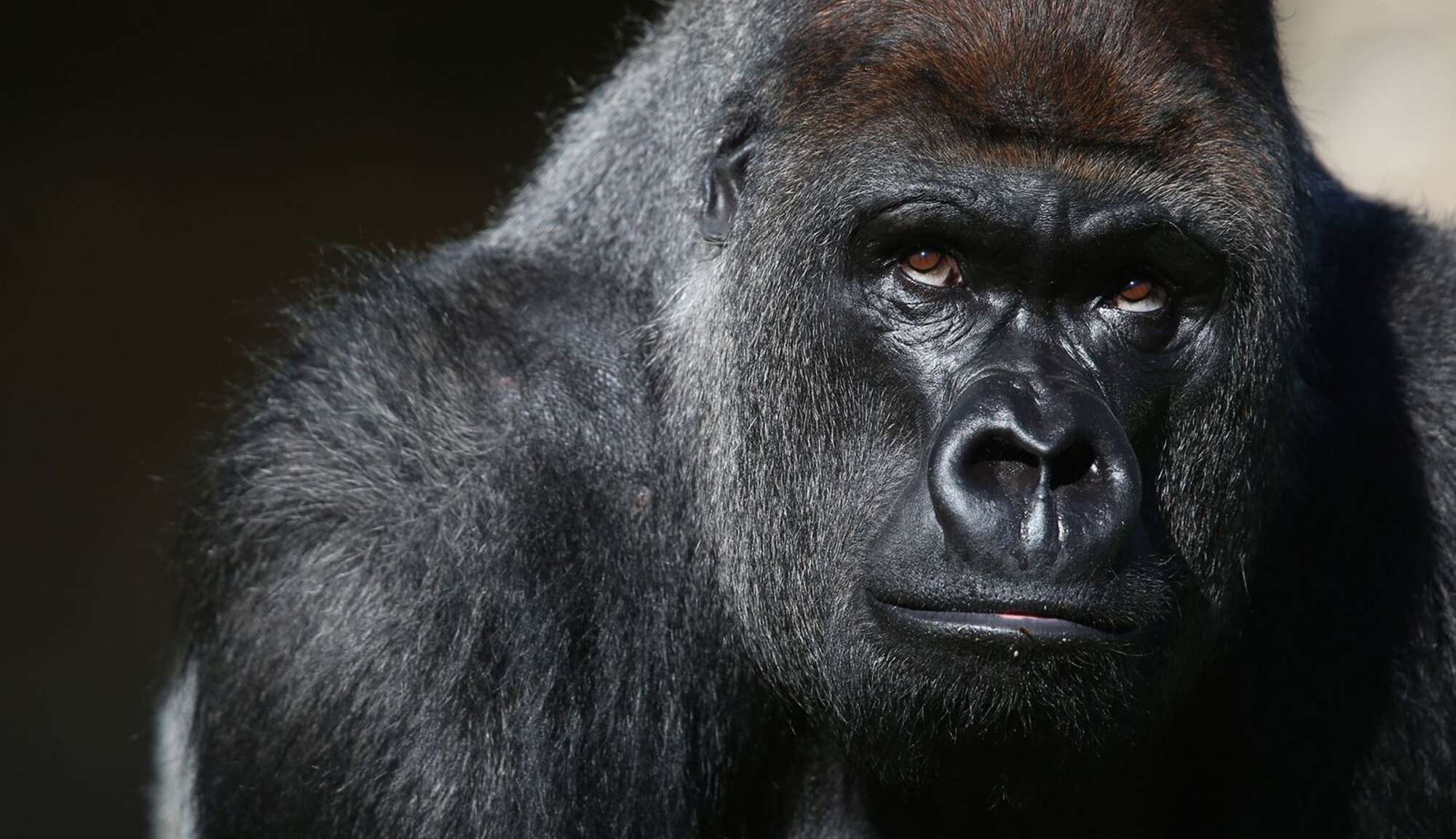 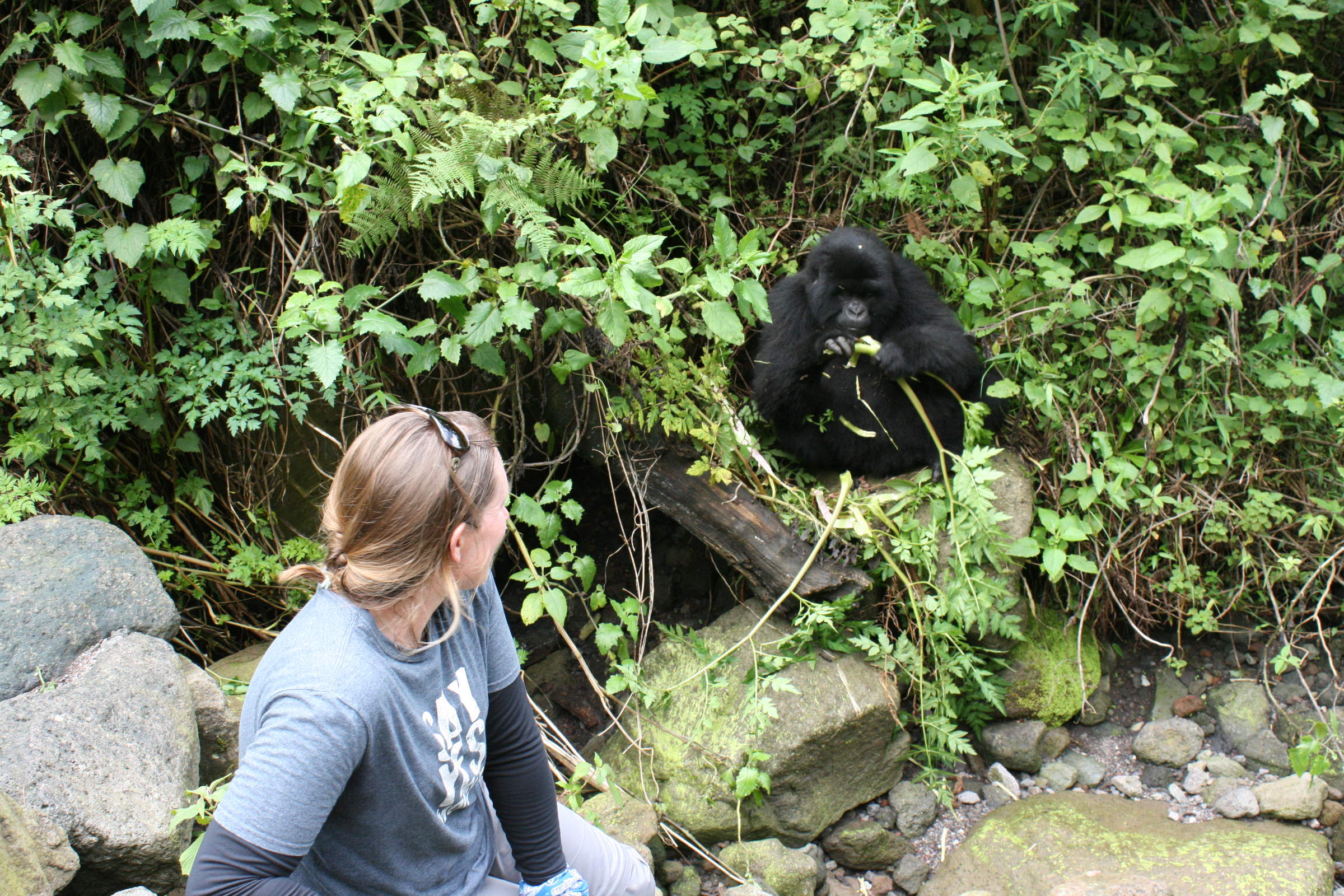 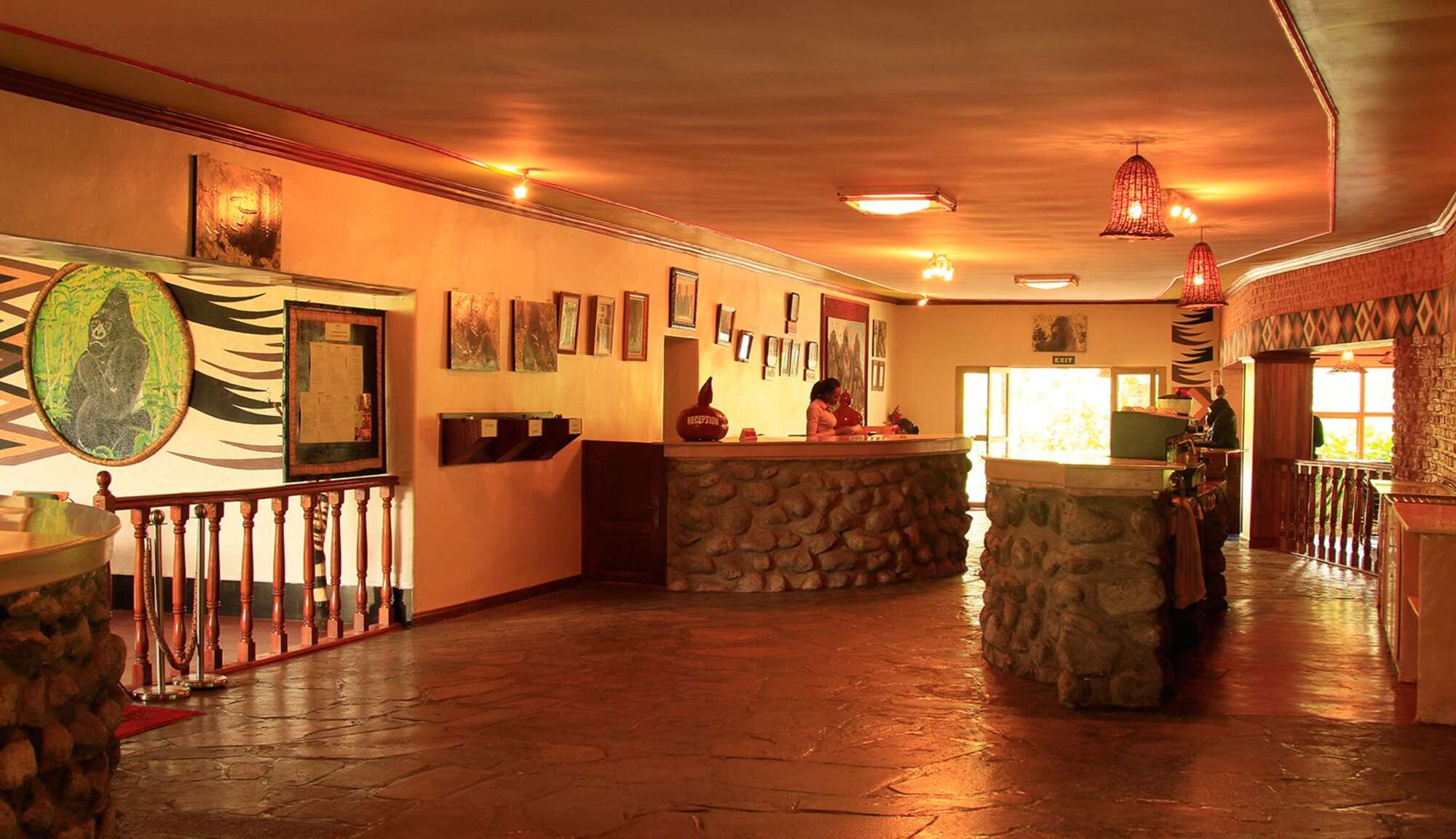 100 independent comments and wildlife information from our travellers who have visited Mountain Gorilla View and kindly agreed to share their thoughts. They do not necessarily represent the views of Expert Africa

4 nights Arrived 16 Jul 2012
"Everybody at the Lodge was friendly. We felt that they needed more training.

The experience with the gorillas was very very special. The guides were very helpful. The climb to the forest to see our first group of gorillas was very strenuous and returning was even harder: we had a climb of several hours an dthen the same back. The walk to another group on the second day was very much easier and the gorillas just as interesting.

5 nights Arrived 7 Jul 2012
"Location is great with beautiful views of the volcanoes and a short distance to the Park HQ for the treks.

Rooms were very clean and comfortable

Food is buffet style which became a bit monotonous and wasn't great for vegetarians. Service was good

The shower is set at a height of about 5 foot so not great for taller people.

Electricity is only available at certain times of the day so if you get back from a trek late then you have to shower in the dark and can't use a hairdryer. Also, after tekking you are offered ginger tea but if you don't like this then nothing else is apparently on offer - I asked for coffee but couldn't have any because the generator was off. There is a kettle in the room and tea and coffee so my top tip would be to take a little flask that you can fill with hot water when the electricity is on.

We were prepared for the cold temperature but even so the fire could have been lit earlier (we had to ask one evening for it to be lit as it was past 6.30 and it does start getting chilly at 4pm). there was no heating in the bathroom and this was freezing.

There was certainly plenty to occupy birdwatchers and the manager (we think) Victor is very knowledgable about what birds are around the lodge.

4 nights Arrived 20 Feb 2012
"It would be very easy to improve the average score we have given Gorilla Mountain View Lodge to a good score. There were some quick fixes that could be implemented at minimal cost which would significantly improve the user experience.

1. Have a salt and pepper pot on every table so the guest does not have to hunt for one on the other tables.

2. Vary the menu a bit more and make the food less bland. We were there for 4 nights and got pretty bored with the food by the end of it. We appreciate that it is difficult to cater to everyone but most of the dishes were very safe ie irish stew, pasta, grilled fish. We were dying for something with a bit of spice ie a curry or chili con carne by the end of the stay.

3. We were in room 6. We don't know if the quality of this room is typical of the general room quality but if it is, then we would say: buy new towels or bleach the ones you already have. We know they were clean but they were no longer white and had gone grey, which makes them look dirty even if they are not. Likewise with the bed linen, it needs replacing. The room needed a lick of paint as it had gone dingy. In our room we had lashings of hot water but it only came out of the tap as a trickle. This made showering impossible and meant it took 20 minutes to run a bath. Incidentally the bracket for the shower head had fallen off the wall at some point in the past and had not been repaired - with the bracket left sitting on the side of the bath. So even if we had wanted a shower, we would have been hard pushed to keep the head up on the wall.

4. We really wanted to tip as many staff as possible i.e the boot cleaners, fire setters, bar staff and table waiting staff, but soon ran out of small denominations in either dollars or Rwandan currency. But each time we went to the front desk, we struggled to get them to change larger bills for us, even when we explained that we wanted to use it to tip their staff.

5. We had two kingsize beds in our room which is probably great if you are two single travellers but as a couple it felt really odd, almost as if surplus furniture had been wedged into our room. One bed is enough thanks!

If the inside of the rooms were as beautiful as the grounds, then they would be very impressive. And as we said it wouldn't take that much to improve them." See all these reviews: 8n in Zanzibar; 5n in Rwanda
Experience Report
Overall Rating:
Average
Location:
Excellent
Service:
Average
Rooms:
Poor
Food:
Average
Mr & Mrs R
Aberdeen

4 nights Arrived 16 Sep 2011
"We really enjoyed our time at Gorilla Mountain View Lodge. The staff were very friendly and attentive, led by a visible and communative manager. The food was simple but with great soups and stews was what was needed with the cold. The rooms were spacious and needed the fire and hot water bottles. A heated towel rail in the bathroom and better lighting would have been welcome.

The boot cleaning service after our muddy trips to Gorillas and Golden monkeys was really appreciated.

The lounges were pleasant but would have been more welcoming with fires in the afternoon.

4 nights Arrived 4 Sep 2011
"the staff were always ready to build fires in the room. Quality and variety of food could definitely be a lot better. Bar area is dark and uninviting.

Birding excellent around the lodge.

4 nights Arrived 4 Sep 2011
"This is a mountain lodge and the service provided are good but erratic, one day your fire was lit, the next not, each room was supposed to have a telephone to reception but ours didn't.

You will feel cold and damp due to the region whether it is the dry season or not, so go prepared, having said that, seeing the gorillas makes up for any short comings and beyond. A little more attention to detail could make the difference." See all these reviews: 5n in Tanzania; 5n in Zanzibar; 4n in Rwanda; 1n in Kenya
Experience Report
Overall Rating:
Good
Location:
Good
Service:
Good
Facilities:
Average
Rooms:
Average
Food:
Average
Mr T & Ms G
Kent

4 nights Arrived 28 Aug 2011
"Wonderful location, friendly helpful staff. Buffet meals made good use of fairly limited ingredients and meant you could refuel quickly before and after activities.

Good sized rooms. Fires in rooms and hot water bottles lovely but much needed as it gets really quite cold at night.

Other lodges in Volcanoes National Park

In a fine location close to Volcanoes National Park, Sabyinyo Silverback Lodge is a very comfortable lodge with wonderful views.

Virunga Lodge is a consciously environmental lodge in a stunning location, about an hour's drive from Volcanoes National Park headquarters.

Gorilla's Nest is a very high-end lodge in a great location near the Volcanoes National Park headquarters, from where all gorilla trips start.

The exclusive and luxurious Bisate Lodge, close to Volcanoes National Park, is one of the best places to stay in the area.

In the town of Musanze, a half-hour drive from the Volcanoes National Park headquarters, Bishop's House is well placed for gorilla trekking.

Close to the edge of Volcanoes National Park, the luxurious Kwitonda Lodge opened in 2019. Ask your Expert Africa specialist for the latest news.