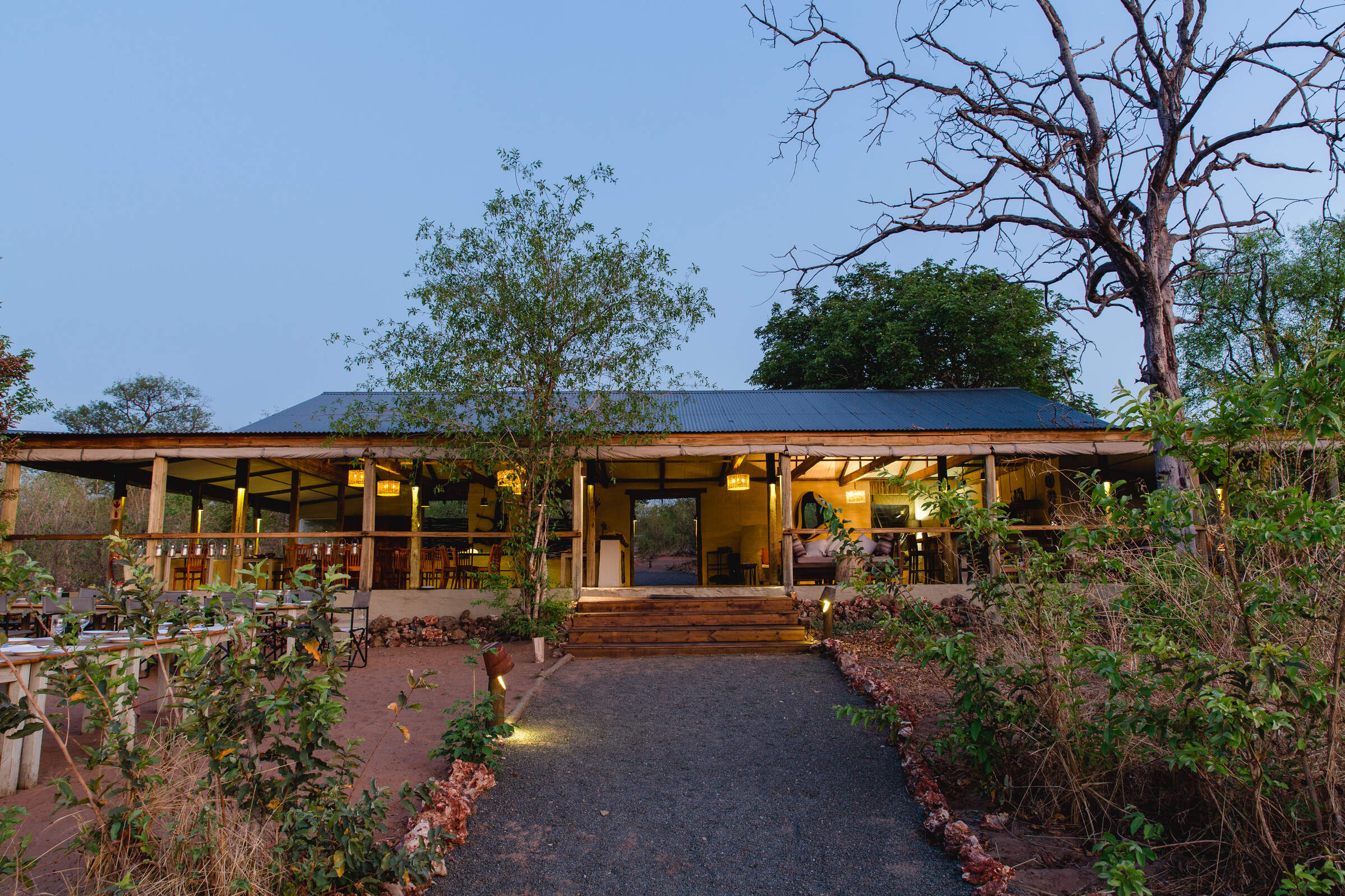 Chobe Elephant Camp is situated in the Chobe Forest Reserve on the western perimeter of Chobe National Park.

Opened in 2013, it is the newest addition to the assortment of accommodation in the area. The camp sits high on a rocky ridge, overlooking the mighty Chobe River and its surrounding floodplains, with views across to Namibia's Zambezi Region (formerly the Caprivi Strip). The camp is simple and fairly contemporary in design, and fits into the surrounding bush setting.

The main communal area at Chobe Elephant Camp is effectively a large corrugated-iron-roofed shed – albeit a nice one! With large exposed wooden beams, polished concrete floors and rendered cream walls, the décor has a modern farmhouse feel. A big island bench separates a tiny bar and the humble sitting area, which is scattered with a few wooden chairs and tables, a wooden bench and a sofa, from the just as simple dining area, whose pine tables and chairs give a slight boarding school feel. Although the building is open to the front, it is set back on the ridge so the views take in only the immediate vicinity.

Steps lead down to a sandy boma area, where on a previous visit we enjoyed post-dinner drinks around the fire, which is lit most evenings. A gravel path takes you to a decent sized swimming pool situated on a deck and surrounded by sunloungers, where guests will find the best views across the river.

Chobe Elephant Camp has 12 chalets, one of them a two-bedroom family unit, that wind around the escarpment from the main area along gravel pathways. The chalets, like all the camp buildings, are constructed from sandbags, which have then been rendered, creating an insulating barrier against the outside elements. Each chalet has a small veranda with a couple of canvas camping chairs, a quiet place to sit and watch for wildlife passing through below.

The chalets are similarly decorated to the main area, with cream rendered walls, polished concrete floors and wooden panelling – stylish, but with only the bare basics. The ceilings have been painted white to add a spacious and airy feel, and there is a ceiling fan for those scorching summer days. The twin beds, which can be made into a double on request, have white crisp linen, wooden headboards and brown scatter cushions. Along one wall, a wooden desk, resembling a small trestle table, has a plug point for charging camera batteries, a lamp and a can of insect repellent. A recess on the opposite wall houses a hanging rail, three small shelves and an electronic safe. A mosquito net suspended by a thin wire frame is folded behind the bed and can be pulled around when needed.

An open doorway, screened by a curtain on a steel curtain rod, leads to the en-suite bathroom, where the rustic theme continues. A rectangular ceramic sink with copper taps sits atop a polished concrete counter. Towels are provided in large wicker baskets beneath the sink, and washing powder and soap are supplied. The shower has its own cubicle, open to one side, and an external door leads outside to a larger, private shower.

The family chalet comprises two separate double/twin rooms, each en-suite, either side of a sitting room, with interleading doors leading from each bedroom. Thus it would work equally well for two couples travelling together.

Activities at Chobe Elephant Camp focus on 4WD game drives in the national park and boat cruises on the Chobe River. It is also possible to do an escorted tour of a nearby village.

While Chobe National Park is without doubt one of the busiest safari areas within Botswana, particularly during the peak dry season from June to October, Chobe Elephant Camp's location on the less-frequented western side of the park means that you are unlikely to come across as many safari vehicles as near Kasane. Access is via the Ngoma Gate, just ten minutes' drive away, where there is no need to brave the sometimes very long queues at the eastern Sedudu Gate.

Often the best game viewing in Chobe is from the river. Boat cruises – which start close to Kasane, approximately 50 minute’s drive away, are taken as part of a full-day trip. Guests leave camp in the morning, taking a slow game drive through the park, usually along the riverfront, before boarding the boat in late morning or early afternoon, when the river is reasonably quiet. The return trip will include either a short afternoon game drive on the way back to camp, or a more speedy drive along the park’s tarred road; all depends on time, as park rules require everyone to be out of the park by sunset. If time is running out, and you’re on the tarred road, the drive could feel rushed, and windy in the back of the open game vehicle, but there is often game to see along the road. We have spotted small herds of sable antelope, lions, elephants and wild dogs here before!

The game densities in Chobe, especially in the dry season (June to October), can be phenomenal, but those who have stayed in the more exclusive private concessions in Botswana may be frustrated at having to share sightings with a fair number of vehicles and boats. Conversely, we have had a few very enjoyable game drives in Chobe National Park. While the game densities on a previous visit, in May 2014, weren't as good as those later in the year, there was game to be seen, and for Chobe, this time of year is relatively free of hoards of people.

Chobe Elephant Camp has more of a farmhouse feel to it than the traditional tented camp but we love its quiet location. When we first stayed in May 2014 we found the guides knowledgeable and the camp staff friendly and willing to help, if somewhat new and unpolished. On a very short visit in November 2015, the staff were still friendly and polite, but we didn’t get to go on any of the guided activities. The camp is not luxurious and comes without the bells and whistles (there are other options nearby if luxury is a requirement), but their rates reflect this and are very reasonable.

Location
Chobe National Park, Botswana
Ideal length of stay
A stay of two to three nights would be ideal at Chobe Elephant Camp.
Directions
It's roughly a 50-minute drive from Kasane Airport to Chobe Elephant Camp, largely along a tar road; transfers are made in an air-conditioned minibus.
Accessible by
Fly-and-Transfer

Usual board basis
Full Board & Activities
Food quality
On our most recent visit in November 2015, we only had time to pop in for a quick visit and didn’t get the chance to eat. However, on a previous stay in May 2014, the meals featured simple home cooking and were generally very good. Vegetarians and many other special requirements can be catered for with sufficient notice.

Breakfast of yoghurt, cereal, fruit, muffins, tea and coffee is served before the morning activity or full-day excursion.

Those taking just a morning game drive will be offered brunch. During our stay in 2014 we had very tasty vegetable patties, fishcakes with homemade tartare sauce, green olive and feta salad, Italian onion and bean salad, fresh homemade bread and a cheese platter to finish.

If you take the full-day excursion then the guide takes a packed lunch, which includes a mix of picnic treats.

For afternoon tea our team had a huge slice of a very yummy carrot cake. The homemade lemonade was one of the best we had during our trip and iced tea and coffee were on offer as well.

Dinner is a three-course meal served after everyone has returned from the afternoon activities. We enjoyed a tasty tomato and bean soup with homemade bread, followed by roast chicken with roast potatoes, baked squashed filled with cheese and corn, and minted peas. For pudding we had a stewed pear in a white-wine reduction, which was nice but not remarkable.

Since mid-2018, many of our travellers who stayed at Chobe Elephant Camp have kindly recorded their wildlife sightings and shared them with us. The results are below. Click an animal to see more, and here to see more on our methodology.

Power supply notes
Chobe Elephant Camp uses solar power as their main source of power but has a back-up generator. Guests can charge camera batteries and other electrical equipment in their rooms.
Communications
There is no direct phone, fax, or email. Cellphone coverage can usually be found at Chobe Elephant Camp.
TV & radio
None
Water supply
Mains
Water supply notes
The chalets at Chobe Elephant Camp have fully plumbed showers. Toilets are flushing and there is running cold water in the en-suite bathrooms. Fresh bottled mineral water and glasses are kept on a stand by the bed.

Malarial protection recommended
Yes
Medical care
The managers are first-aid trained. The nearest doctor is in Kasane, which is approximately 50 minutes' drive from the camp.
Dangerous animals
High Risk
Security measures
Guests are escorted to and from their rooms in the evening. There are locks on the chalet doors. 'Fog horns' are provided in the chalets to summon help in case of emergency.
Fire safety
Fire extinguishers are situated around the lodge.

Disabled access
Not Possible
Laundry facilities
A laundry service is included, although this does not include underwear. Washing powder is provided in the rooms for this purpose.
Money
There are safes in all the rooms.
Accepted payment on location
MasterCard and Visa credit cards are accepted; Diners and Amex are not. Cash payments may be made in South African rand, GB sterling, US dollars, euros and Botswana pula.

This is a typical location for Chobe under Canvas, a small, semi-permanent camp in the Chobe Riverfront area that offers good value for money and high standards of care.