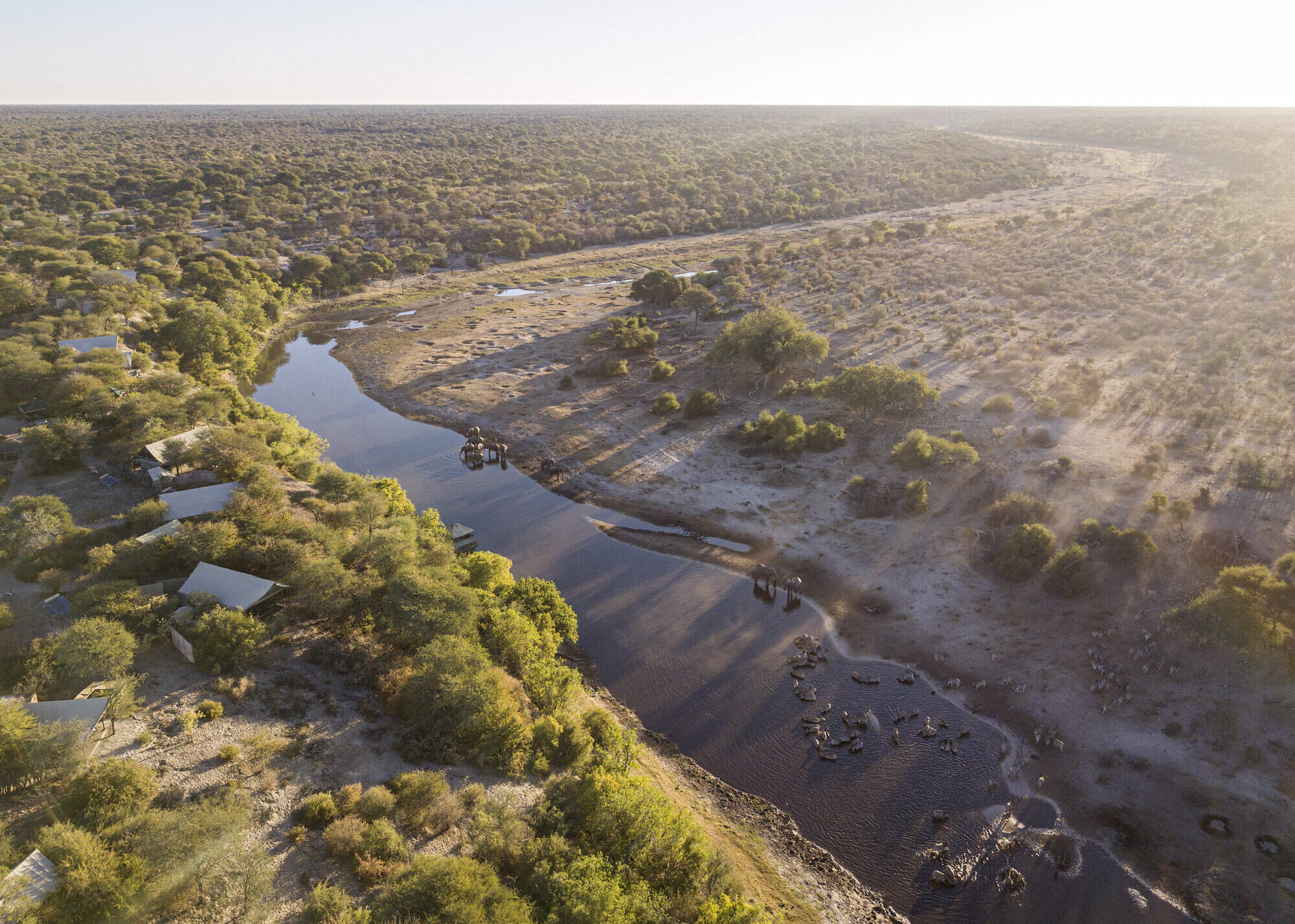 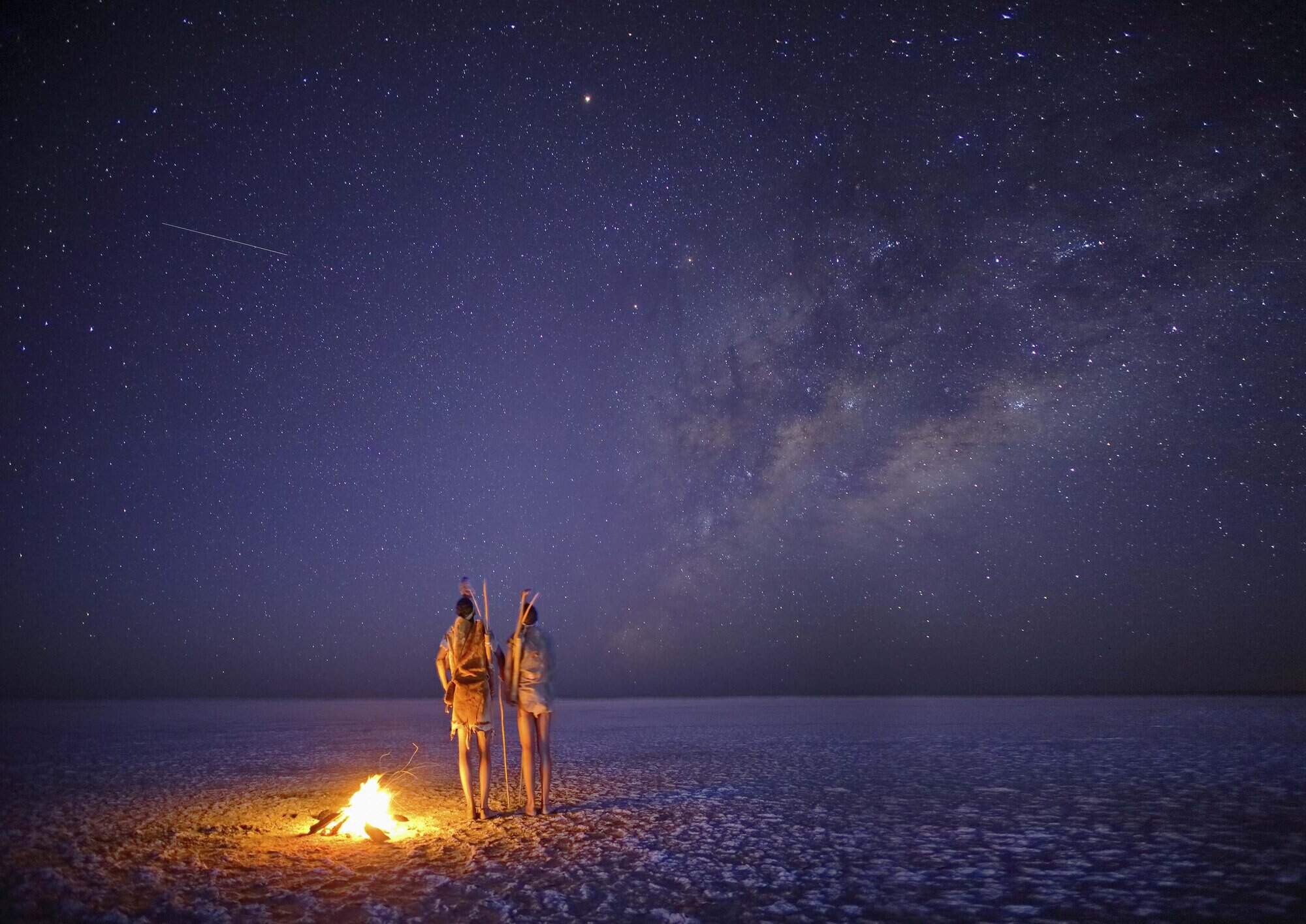 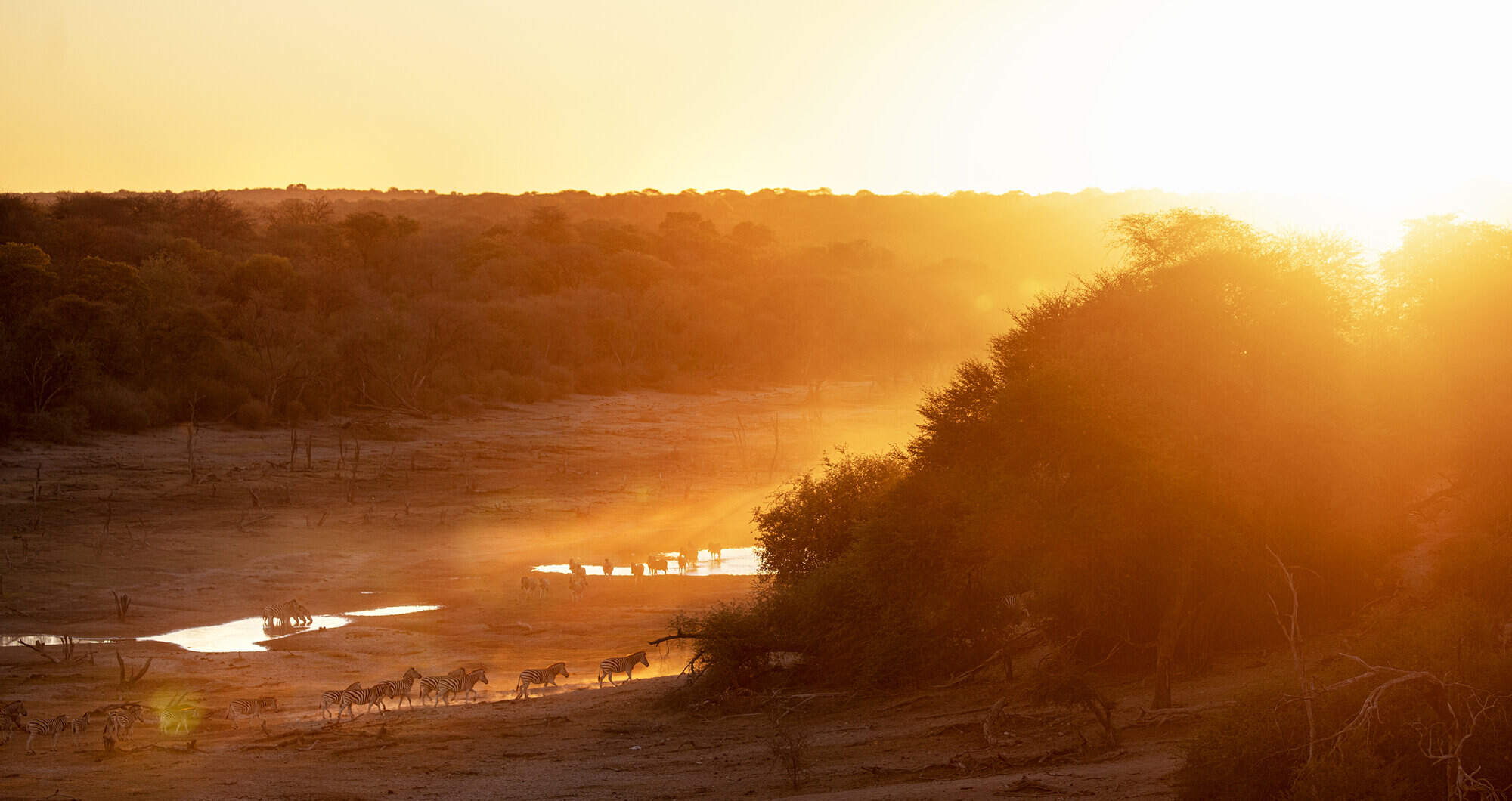 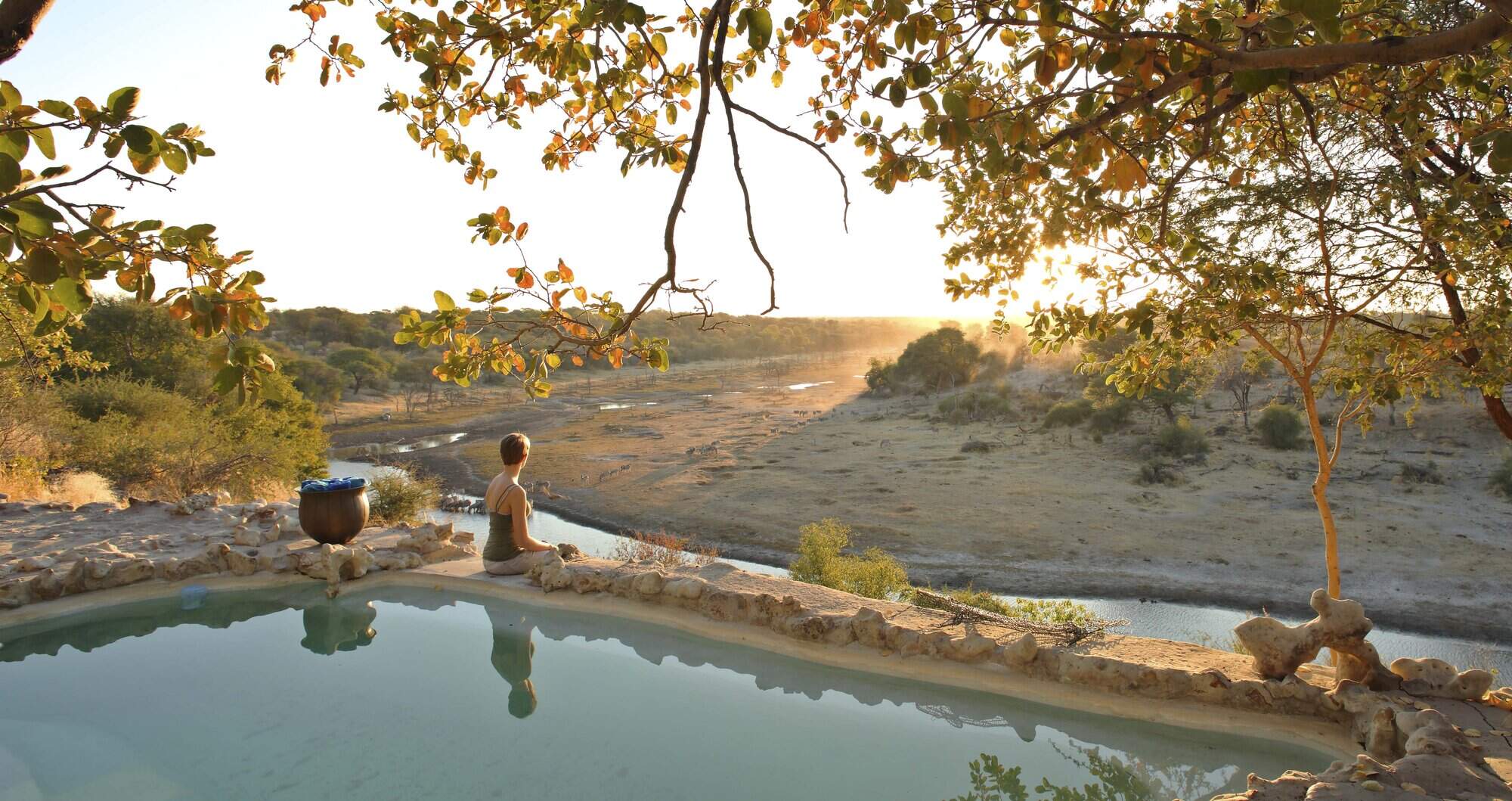 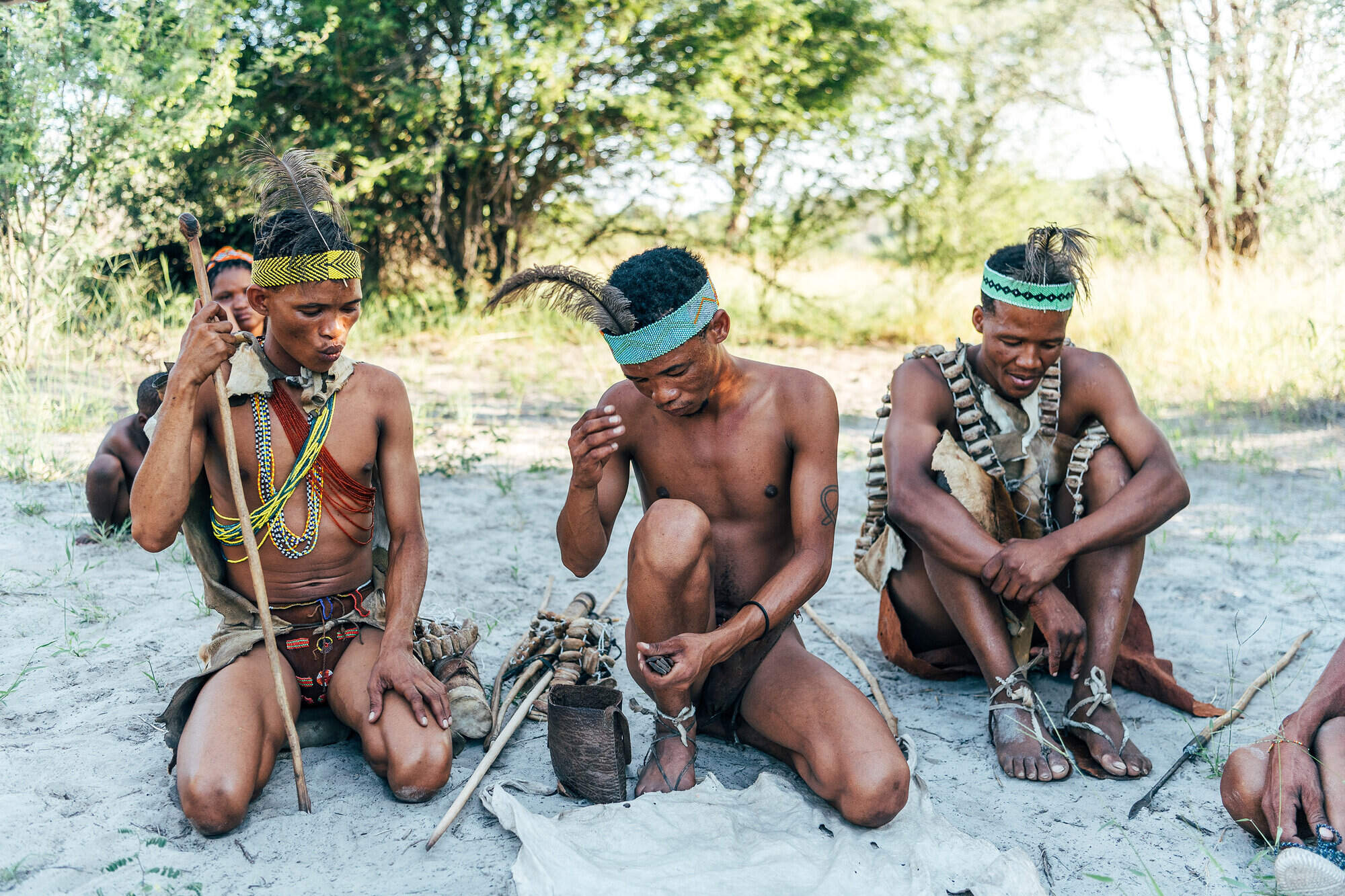 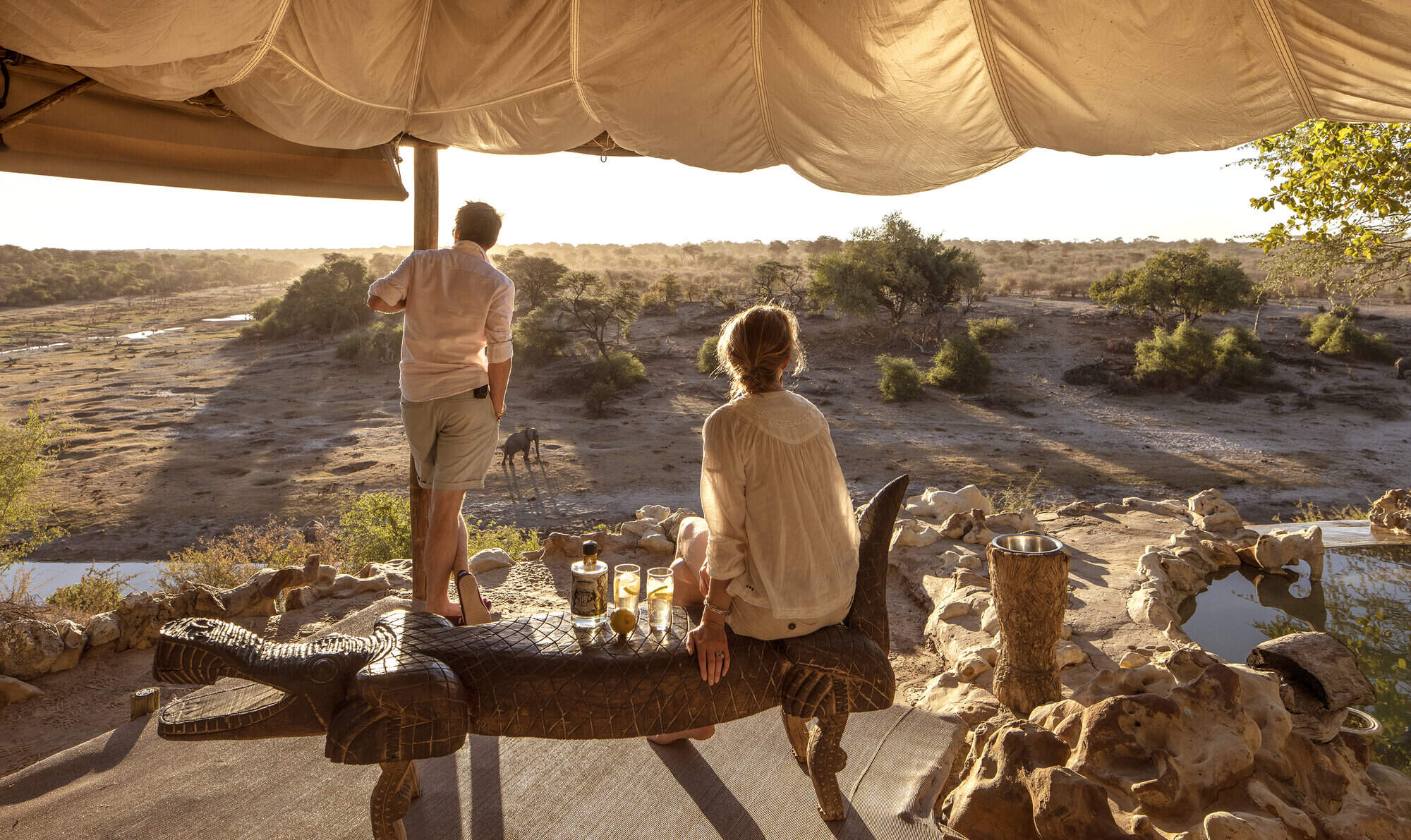 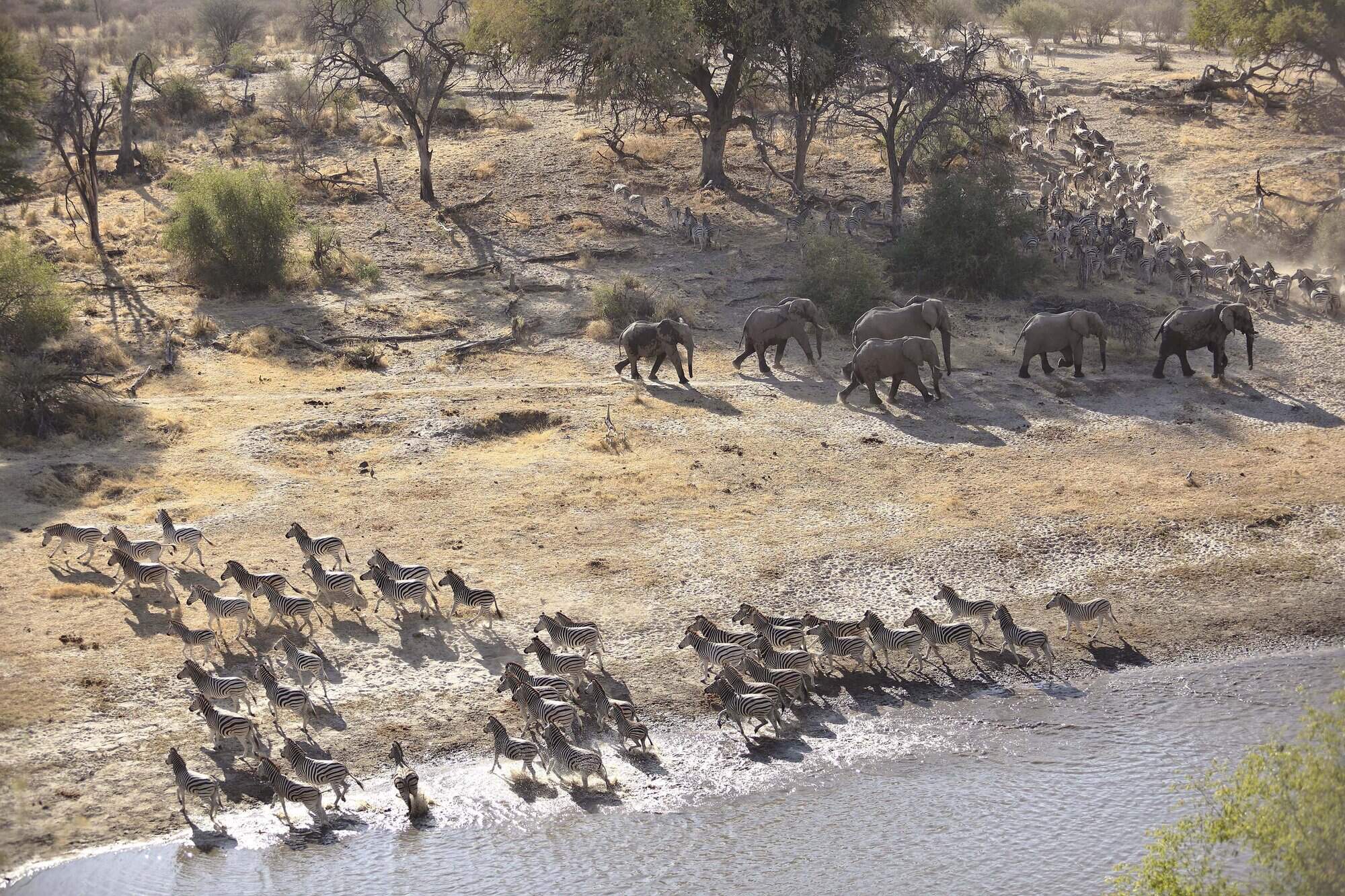 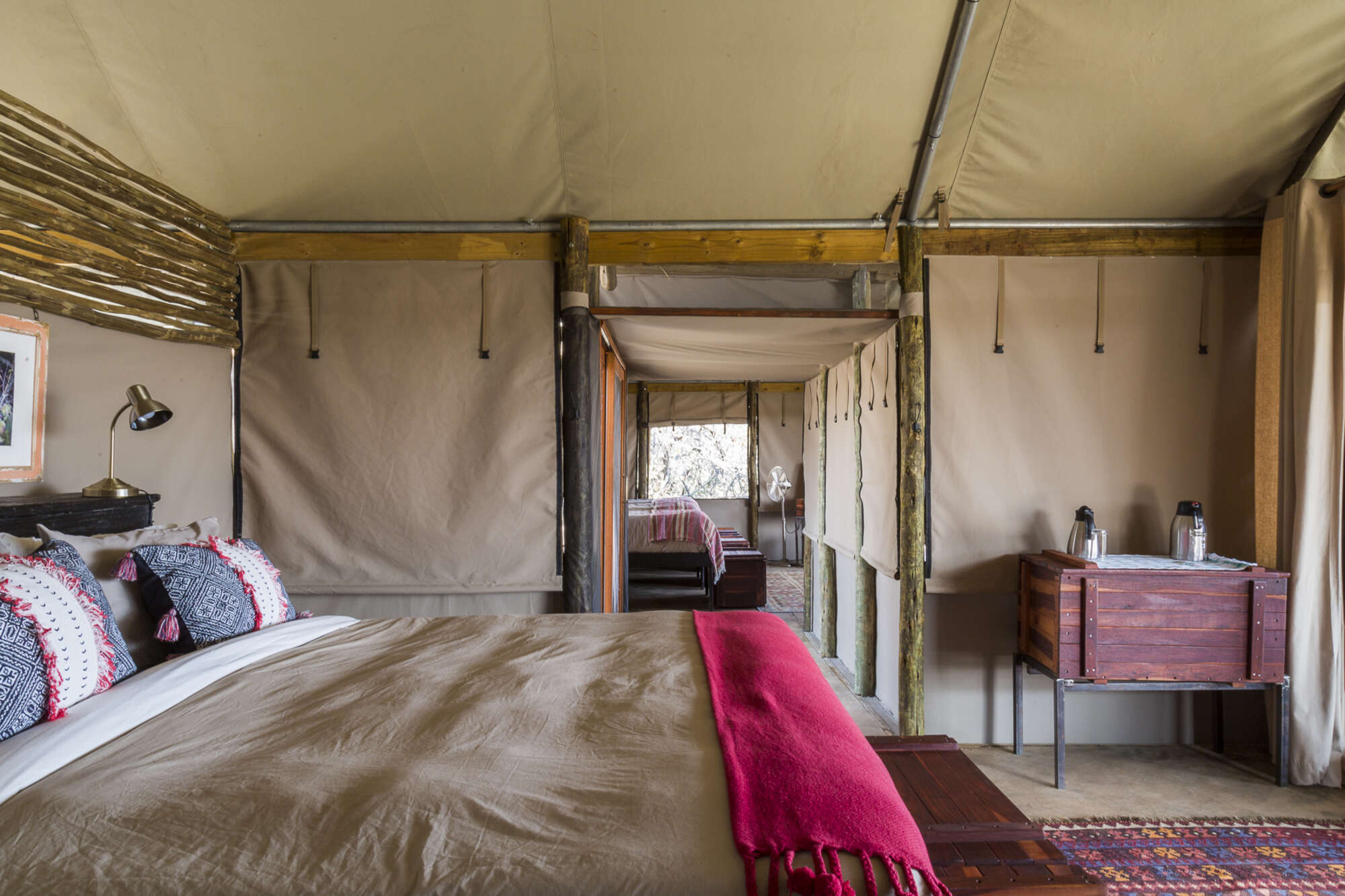 About Meno A Kwena

Meno A Kwena is an old-style safari camp; the owners we know well.

It is situated on tribal land on a cliff edge overlooking the Boteti River, which began to flow again in late 2008, having been dry for over 15 years. The name Meno A Kwena is the local name for the area, which translates as 'teeth of the crocodile'.

Meno A Kwena's relaxed atmosphere, warm welcome and the team's keen interest in the surrounding area and its wildlife shine through – as does the hands-on approach of the camp's committed owner and managers. It won't be to everyone's liking – it's fairly rustic, and if you are travelling to Botswana for a pure big-game experience then it's tempting to say Meno A Kwena will not be for you. The return of water to the Boteti has started to change the dynamic here however and often game-viewing from the camp is as good as it is from the vehicle.

Looking at the bigger picture, Meno exists right on the transition zone between the unique Okavango Delta region of the Kalahari and the more typical, dryer regions further south - it's this location which makes it special. So, if you are keen to experience something slightly different from the norm with a rather quirky feel and an emphasis on the human side of life in Botswana as well as the wildlife, Meno is certainly worth a visit for at least a couple of nights.

Traveller reviews of Meno A Kwena

"Better than I expected"

"You really can not beat the view of the Boteti river. The staff was very …" Read Mr C’s full holiday review

"We stopped here for one night, and arrived late (no fault of anyone at this …" Read Family K’s full holiday review

"Oh my, what a wonderful place this is and the staff are just as lovely. Ursula …" Read Ms M’s full holiday review

"Mixed impression at Meno A Kwena"

"The camp is beautiful, everything feels like it has been lovingly and minutely …" Read rullesteg’s full holiday review

"The location is 45 minutes from the main entrance to the park. This meant …" Read Mr & Mrs B’s full holiday review

"Superb camp at Meno A Kwena"

"A very satisfying wilderness experience. We were priveleged to be in accommodation …" Read Mr & Mrs F’s full holiday review

"Laid back, prehaps a little too much."

See all Meno A Kwena reviews

When we travel we take lots of photos ourselves to give you a real and un-edited view of the safaris. See our 54 pictures and 1 videos of Meno A Kwena to get the candid view.

Look closer at the environment and surroundings of Meno A Kwena.

When to go to Kalahari's Salt Pans

Our month by month guide: What it's like to visit Meno A Kwena in Kalahari's Salt Pans

January is at the peak of Botswana’s rainy season. These rains are often in the evening and are short but heavy, with occasional thunderstorms. Temperatures will still be high but cooler than October–December. Animals are generally dispersed, and not easy to spot, with the best game viewing found in the north of Chief’s Island and on the eastern and southern sides of the Okavango Delta.

January is also one of the best months to see the zebra and wildebeest migration in the Makgadikgadi salt pans and at Nxai Pan. Migratory birds abound throughout northern Botswana, along with a large number of breeding flamingos in the flooded salt pans. Rates are generally relatively low, making this a good time to visit on a budget.

The weather in February is very similar to January, with heavy rain most days – often towards evening – and temperatures on the high side, albeit cooling off from the rains and surface water. Across northern Botswana, the landscape feels green and alive; insects and smaller animals are more easily seen, and many birds and animals are raising their young. However, the rains have created pools and waterholes in the bush and thicker vegetation and tall grass makes it trickier to spot larger animals.

Further south, the game viewing is beginning to pick up in the Central Kalahari Game Reserve. Visitor numbers remain low, with attendant rates and availability in camps and lodges.

March usually sees Botswana’s main rains starting to tail off. Many days will be clear, with a strong sun raising temperatures. On some days clouds will build, and the late-afternoon may see a short thunderstorm. Across the country, the landscape is green and alive. Many birds and animals are finishing raising their young. Much of the migration is now moving north towards the Savute area or Chobe National Park, though thick vegetation still makes it trickier to spot even larger animals.

March is one of the best times to be in the Central Kalahari Game Reserve, where many of the pans fill up and animals come to drink, closely followed by predators. With few visitors in most areas, rates may still be relatively low.

During April the rains have usually stopped, though there may be still be the odd late downpour. This results in clear skies and a lovely green, lush landscape. Night-time temperatures usually start to drop during April with this being most noticeable in the Central Kalahari and the Makgadikgadi areas. The Central Kalahari is really coming into its own at this point and from April through to May/June the Savute region is a particular favourite of ours, with good predator/prey interaction.

In much of northern Botswana, the camps are coming into their “shoulder” season, so rates are on the rise but still relatively low.

May is a very popular month to visit Botswana, often the last month of the “shoulder” season before camp rates hit their peak. While there is very little chance of rain, the annual floods from Angola are starting to make their way through the northern part of the Delta, and will eventually reach the majority of the Okavango late June.

With cooler temperatures morning and evening, predator activity tends to be higher, although tall grasses can still obstruct game viewing. With cool crisp evenings, and the game viewing really picking up, this is the favourite time to visit for many of our team – and camp bookings throughout Botswana are snapped up quickly.

June is the real start of the dry season. Temperatures are still cool in the morning and evenings with night-time temperatures sometimes reaching freezing, rising to 25–30 degrees Celsius during the day, with blue skies. Along with this comes a certain clarity to the air, favourable for serious photographers. Surface water and waterholes begin to dry up during this period and many animals begin to congregate around the remaining areas with water.

Visibility is improving as the grass is beginning to die back, and game viewing is very good everywhere, with particular improvement in the Kwando–Linyanti areas. Not surprisingly, camp availability is becoming scarce and rates are high.

Evenings and mornings are still cool in July, and this combined with great game viewing makes it one of the most popular times to visit Botswana. Vegetation is really thinning out now making game easier to spot, with the few remaining waterholes attracting lots of wildlife. The north-eastern side of Chobe National Park, along the Chobe River, is also very rewarding, although this area can become very busy.

Game viewing is extremely good in the Khwai areas, too, but again, this is a public area and – unlike in the private concessions of the Delta – vehicle numbers can be high. Camps are now very much into the peak season, and tend to be full.

August is a popular time to visit Botswana, coinciding with the European summer holidays, and camp availability is difficult. Temperatures are generally cool at night, and comfortable during the day, although towards the end of the month they can rise above 35 degrees Celsius (albeit with low humidity). Cloudless skies bring spectacular star-gazing. Wildlife has congregated around the few remaining water sources, and much of the vegetation has now died back, so wildlife viewing tends to be varied and rewarding, particularly in the Okavango Delta.

Depending on the rains in Angola this can also be one of the best times to see the delta floods at their peak.

September is another favourite month for some of our team members. Daytime temperatures are getting warmer, but nights remain cool. With the drier conditions, most of the greenery has faded from the landscape, and dust or even smoke create hazy conditions that aren’t great for photographers – though this does result in fantastic sunsets.

This is another extremely good month for game viewing, with large numbers of elephant and buffalo congregating in the Chobe region and migrant birds begin to return to Botswana. Rates remain high – and availability correspondingly low.

October is the one of the hottest months of the year, and usually one of the driest. Towards the end of the month the chances of rain can increase, and along with this can come greater humidity. The air is usually dry and hazy, making photography more challenging, but the lack of water and vegetation result in very good big-game viewing.

Water levels are now much lower, so water-based activities such as boating, mokoro trips and fishing cease in many of the camps which are not on major tributaries.

November usually marks the end of the dry season in Botswana, when increasing temperatures drive a rise in humidity, sometimes culminating in the first rains. These are often short but very heavy showers in the late afternoon or during the night, and can be spectacular. The rains lower the temperatures slightly but bring a flush of green back into the dry landscapes. As waterholes in surrounding areas fill, wildlife will gradually begin to disperse as it is not restricted by the availability of water.

November is a great time for birdwatching, with the arrival of many migrant birds. The first couple of weeks are very popular with travellers looking for great game viewing at lower rates as Botswana enters the “shoulder” season.

The rains in Botswana have now started, bringing some respite to the high temperatures. Game viewing becomes harder as wildlife is more dispersed but great sightings can still be had in the right areas such as Khwai and the Kwara and Mombo concessions.

Areas such as the Makgadikgadi Pans change completely with the salt pans becoming covered in a shallow layer of water attracting large numbers of breeding flamingos. Low-season rates at many camps are a draw.

Other lodges in Kalahari's Salt Pans

Jack's Camp was the original camp in the Makgadikgadi area, and many still consider it the best. Come for a unique and memorable experience, but not for prolific game viewing.

The simple but stylish San Camp lies in a stunning location beside the Makgadikgadi Salt Pans, where highlights are quadbiking, meerkats, and Bushmen walks.

From the western bank of the Boteti River, Leroo La Tau overlooks the Makgadikgadi Pans National Park, where game concentrations are highest from July to October.