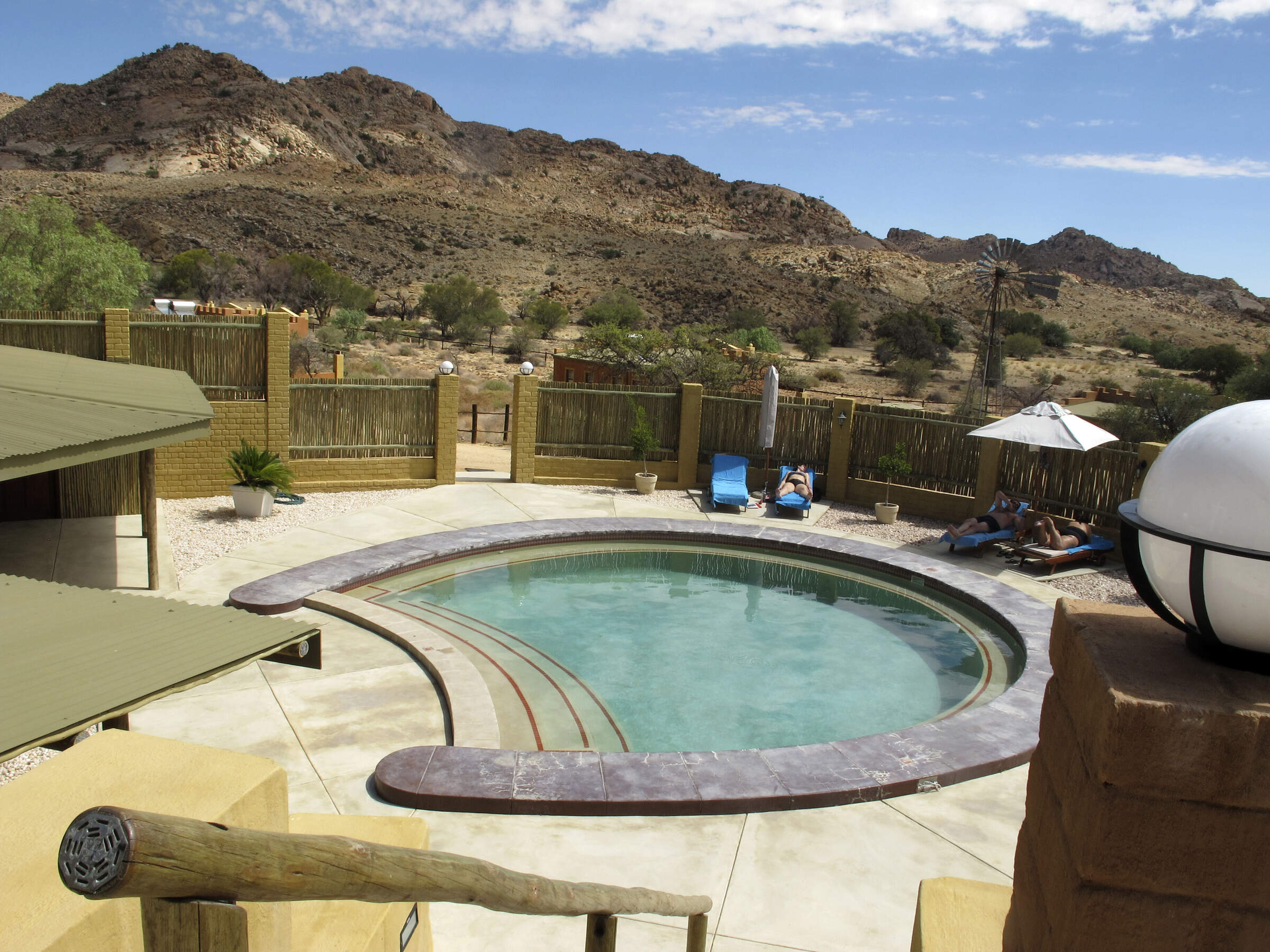 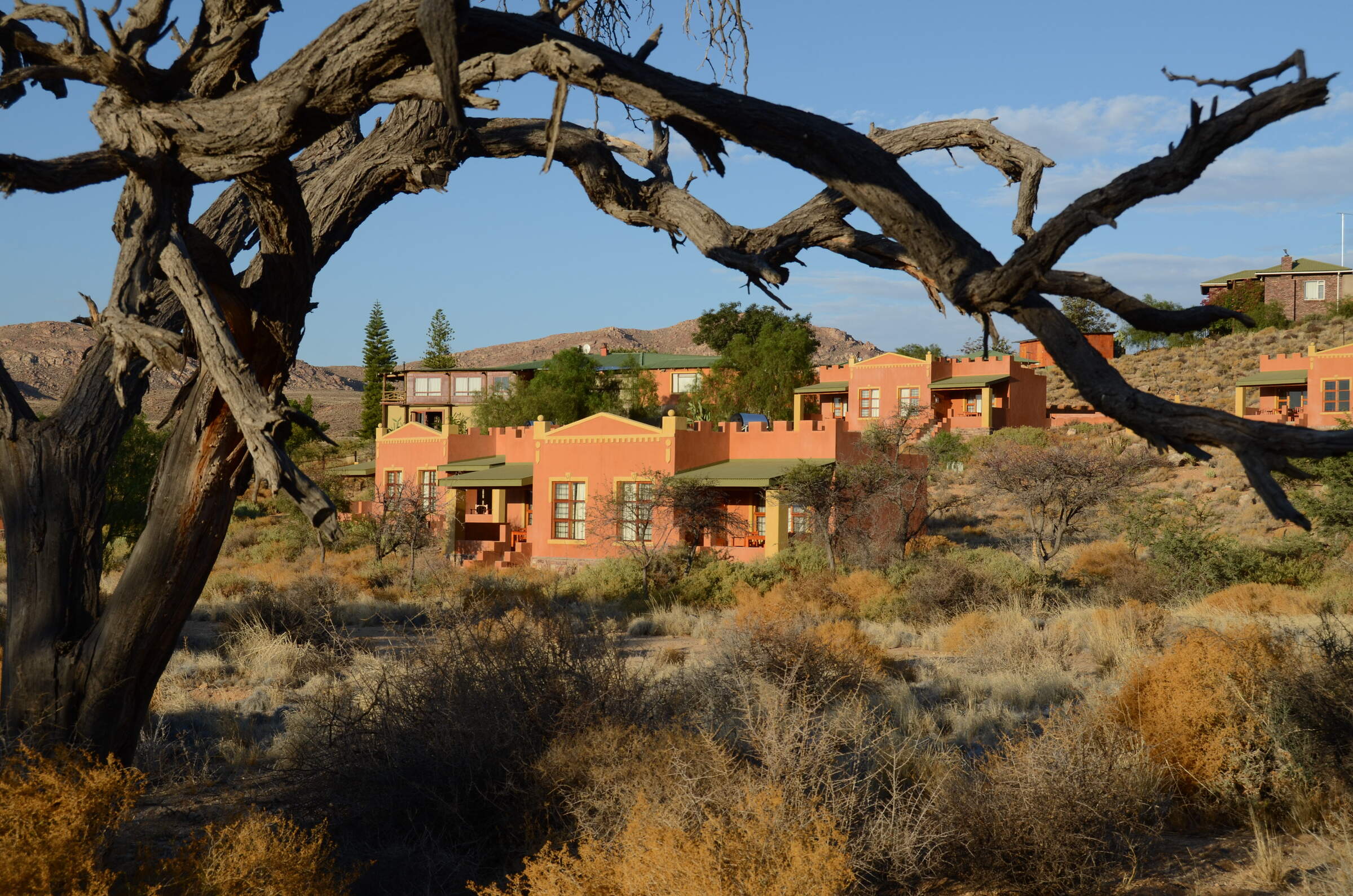 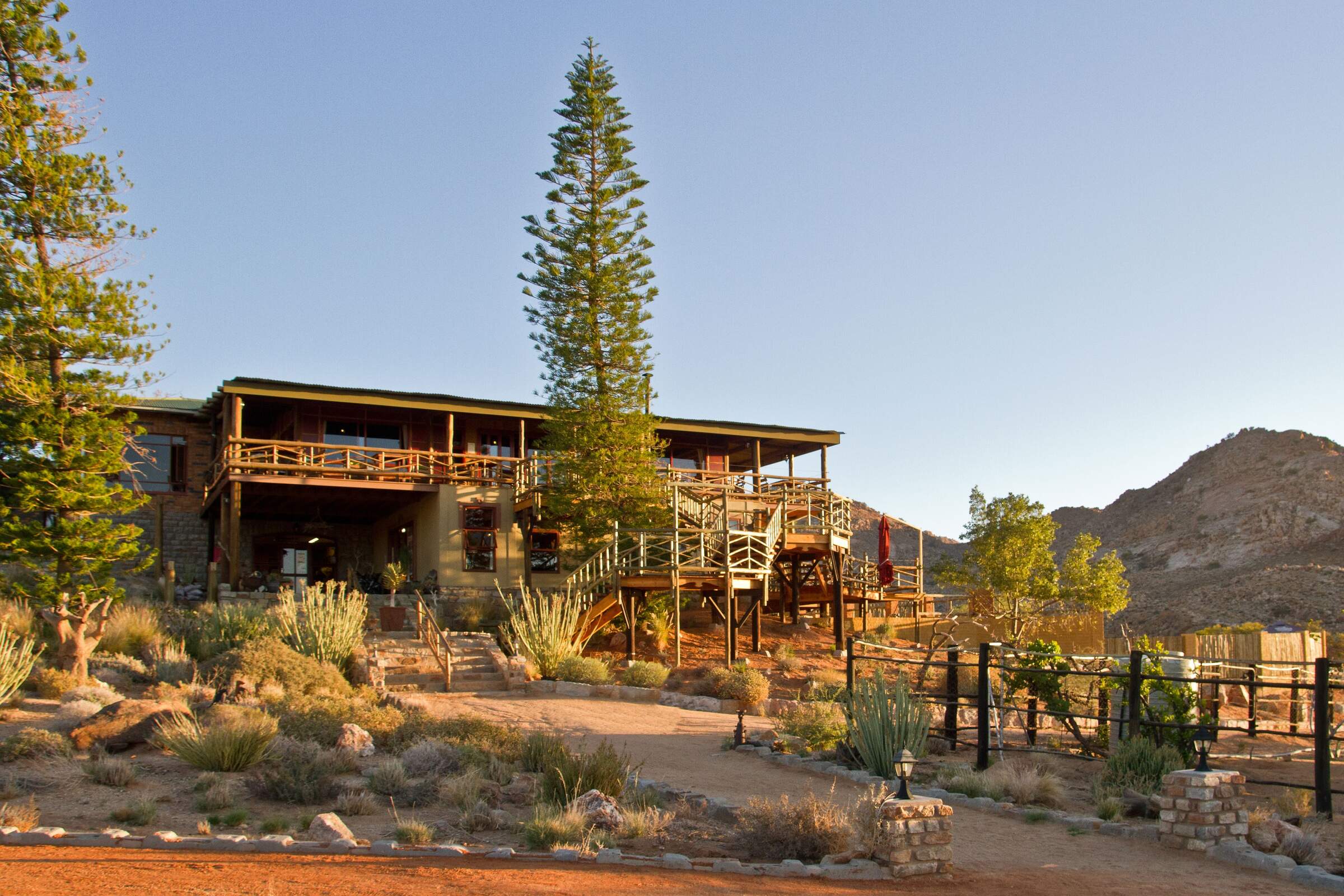 43 independent comments and wildlife information from our travellers who have visited Desert Horse Inn and kindly agreed to share their thoughts. They do not necessarily represent the views of Expert Africa

1 night Arrived 11 Oct 2019
"Provided a good brochure with trail maps but some of the trail markings were hard to find.

The traditional Namibian stew was delicious!

"Excellent lodge to hang out "

The room is tastefully decorated with an excellent restaurant. Staffs are very helpful and friendly. A very good base to use for visiting Luderitze.

2 nights Arrived 20 May 2018
"We had a well appointed and spacious room with a great view. Good bar with wide choice of beers.

The food in the restaurant was the best we had on the whole trip and the price of the wine the best value for the quality as well.

"Situated in a very small settlement "

2 nights Arrived 16 May 2018
"Our room No 21 was a semi-detached chalet which could accommodate 3 people in single beds. It was one of the closest rooms to the main hotel facilities which included lounge, restaurant and swimming pool. There was a little terrace situated up a couple of steps with a table and seating to allow us to watch the sun go down. Nice to have fridge, kettle and tea/coffee making facilities.

A notice advised that water was scarce here in the desert. It was heated by solar power which would be hottest in the afternoon and evening and it would cool down overnight. If no sunshine, electricity would heat the geyser. Thus evening showers were appropriate during our stay.

The main course of the evening meal was buffet style with the starter and dessert served at the table. We were very upset regarding the wine; on tasting, we found our bottle of Merlot was corked and undrinkable. Initially the inexperienced waitress stated we would have to pay for the bottle as it had been opened! It was not until our Ultimate Safari guide intervened that 2 acceptable glasses of house Merlot were produced and for which we paid.

This hotel in Aus is well placed to see the wild horses which live in the spectacular desert landscape and for us, was over an hour's drive to Kolmanskop, the old diamond mining town which we particularly wanted to visit." See all these reviews: 17n in Namibia
Experience Report
Overall Rating:
Good
Location:
Good
Service:
Average
Rooms:
Good
Food:
Good
Sightings Report

The wild horses were worth a visit but sad to see them in such a poor state & learn how man is interfering with nature." See all these reviews: 27n in Namibia; 1n in Botswana
Experience Report
Overall Rating:
Excellent
Location:
Excellent
Service:
Excellent
Rooms:
Excellent
Food:
Excellent
Facilities:
Excellent
Mr & Mrs C
Cambridge

1 night Arrived 3 Nov 2017
"Used as a brief overnight stop en route north from Fish River - pity as we could easily have stayed longer.

1 night Arrived 6 Apr 2017
"We stayed here just one night so as to see the feral horses in the area. The facilities and rooms (very roomy) were great and the staff was very friendly and helpful. We ate supper in town so could not rate it but the breakfast was excellent.

We were a little late in arriving so did not see the horses at the nearby waterhole but by getting there early the next morning, we were rewarded by a beautiful sunrise and seeing the horses (6) saunter over from afar to drink at the waterhole, followed by a lone Oryx bull.

"Very homely with a lot of thoughtful touches"

1 night Arrived 12 Oct 2016
"After the remoteness of Fish River, it was great to arrive at Desert Horse Inn - it had a very homely feel and the room had a few thoughtful touches like a hot water bottle and blankets in case it got chilly.

The restaurant and bar area were lovely - we didn't eat dinner there as we were full from lunch although the barman did suggest a cheese platter which went down a treat - breakfast was lovely with lots of home made treats" See all these reviews: 15n in Namibia
Experience Report
Overall Rating:
Excellent
Location:
Excellent
Service:
Excellent
Rooms:
Excellent
Food:
Excellent
Ms V & Mr C
Belgium

2 nights Arrived 11 Oct 2016
"We camped at Desert Horse Inn for 2 nights. On our arrival, we missed the entrance to the campsite. There are no signs for Desert Horse Inn at the side of the road, but there are for Klein Aus Vista and that is where you need to be. This was indicated in our travel information, but we noticed it a bit late.

However, this gave us the chance to visit the Garub waterhole immediately. The campsite itself is nicely located at the side of a few mountains. All facilities are good, the main building and reception area are at Klein Aus Vista which is 2km from the campsite." See all these reviews: 9n in Namibia; 2n in Botswana; 1n in Zimbabwe
Experience Report
Overall Rating:
Good
Location:
Good
Service:
Good
Facilities:
Good
Showing 1-10 of 43
12345
Next
89%
43 reviews of Desert Horse Inn by travellers since August 2007
Overall rating by our travellers
22
19
2
0
0
Filter by month

Other lodges in Luderitz

The rustic chalets at Eagle's Nest on the Klein-Aus Vista reserve make a scenic base for hiking in the mountains, or just to enjoy the solitude.

With ocean views from all its rooms, the Nest Hotel is perfectly placed to appreciate the best of Lüderitz.

Haus Sandrose offers comfortable self-catering units in the heart of Lüderitz and a good base to explore the many attractions in and around the area.