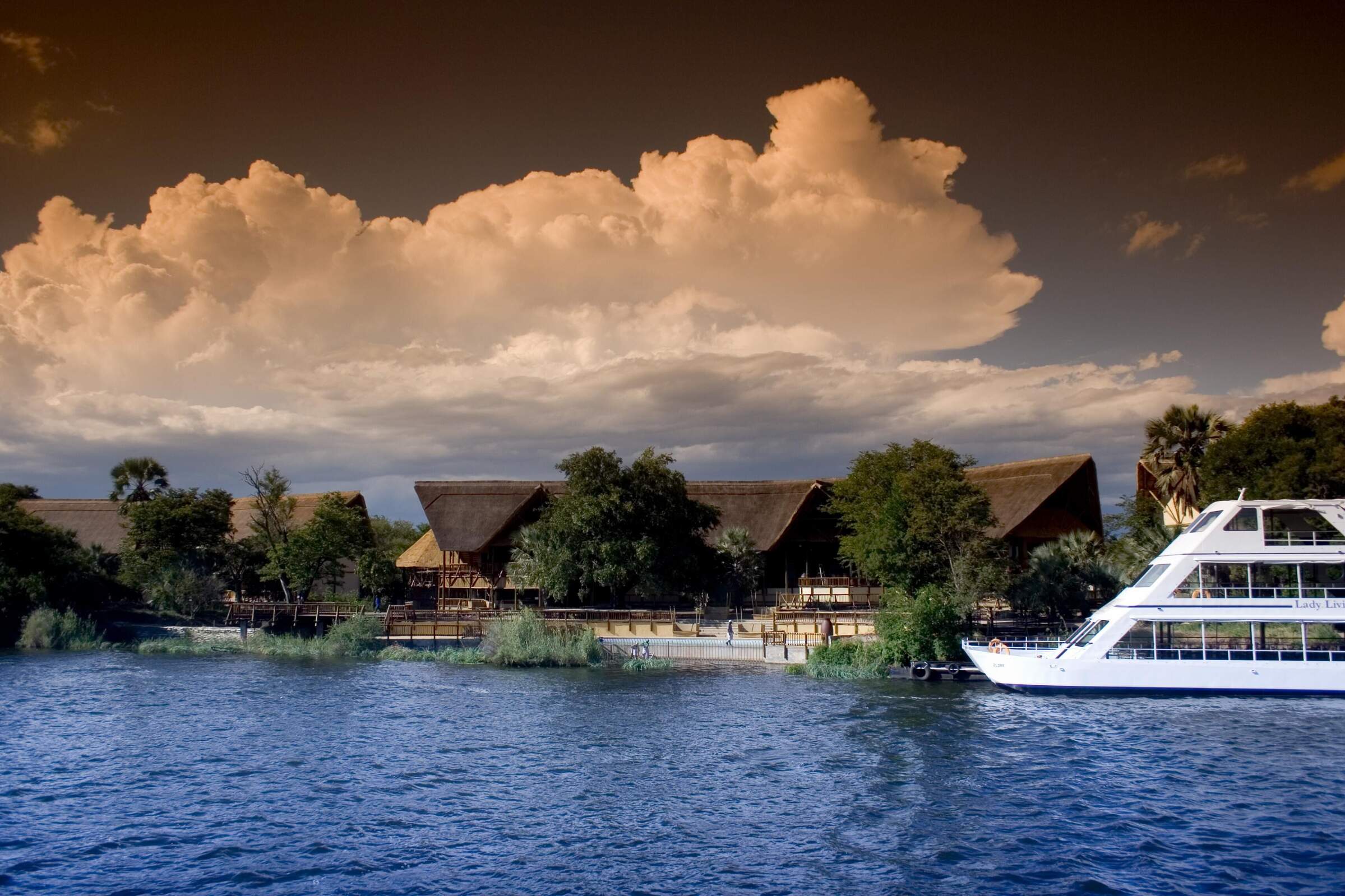 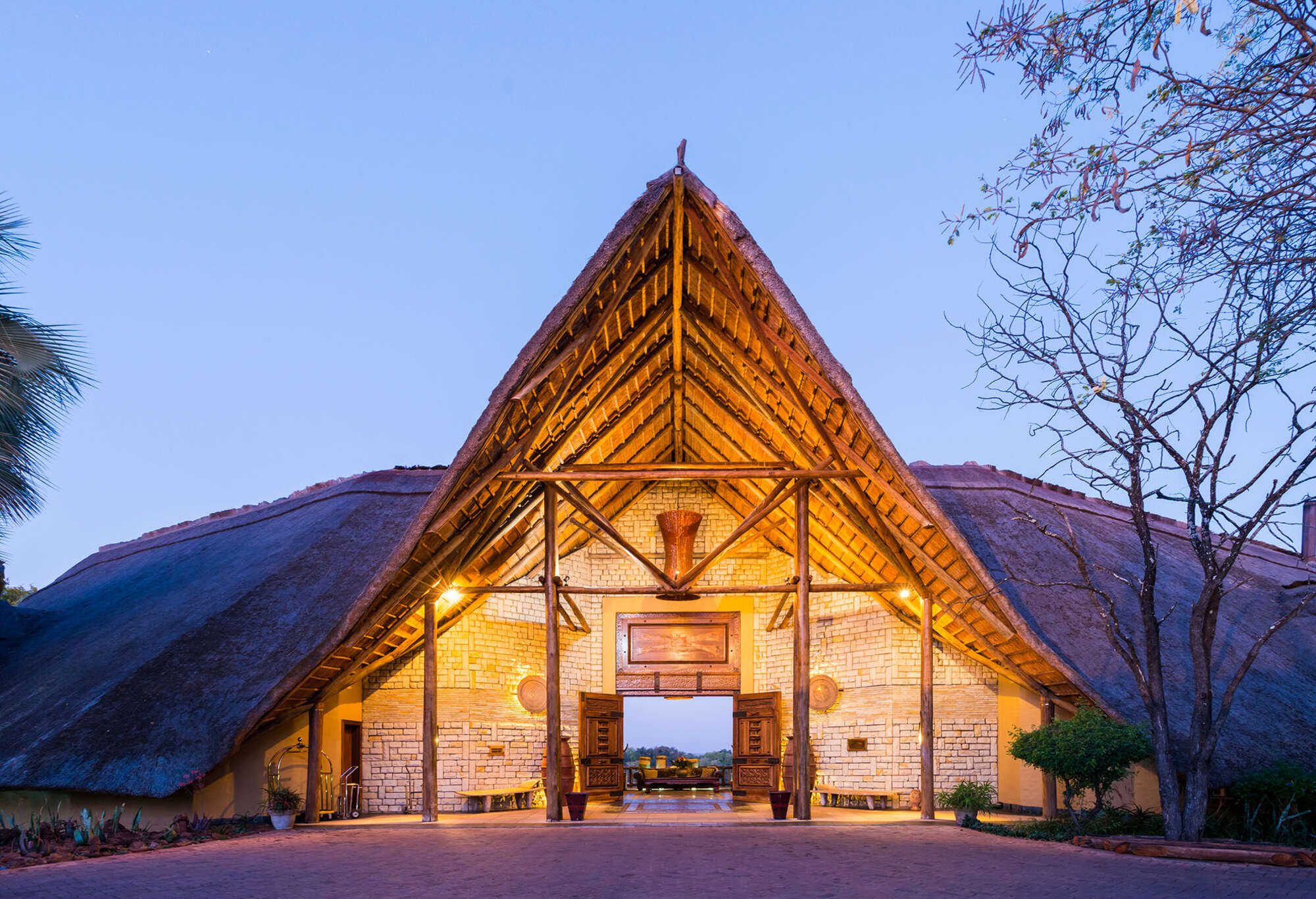 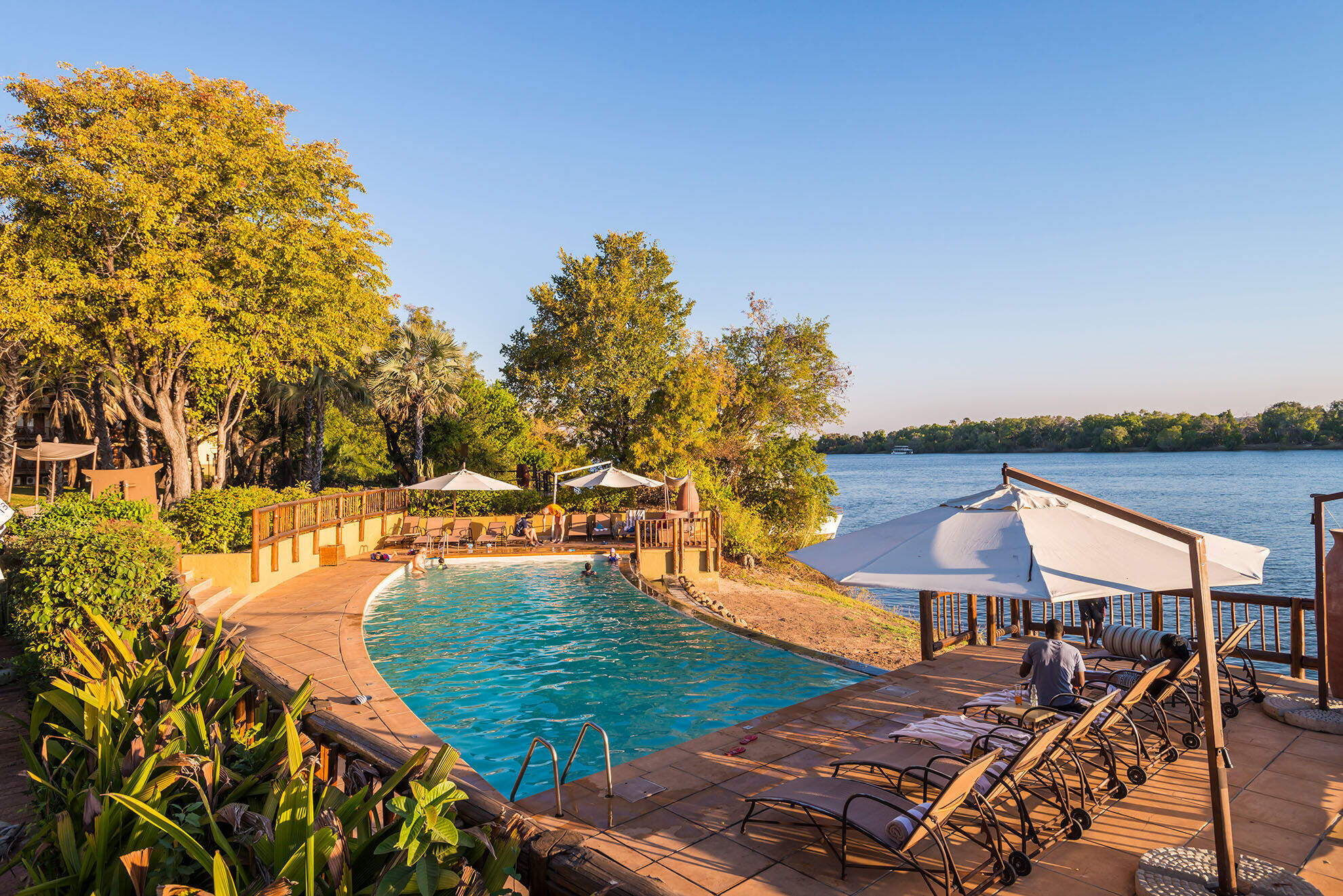 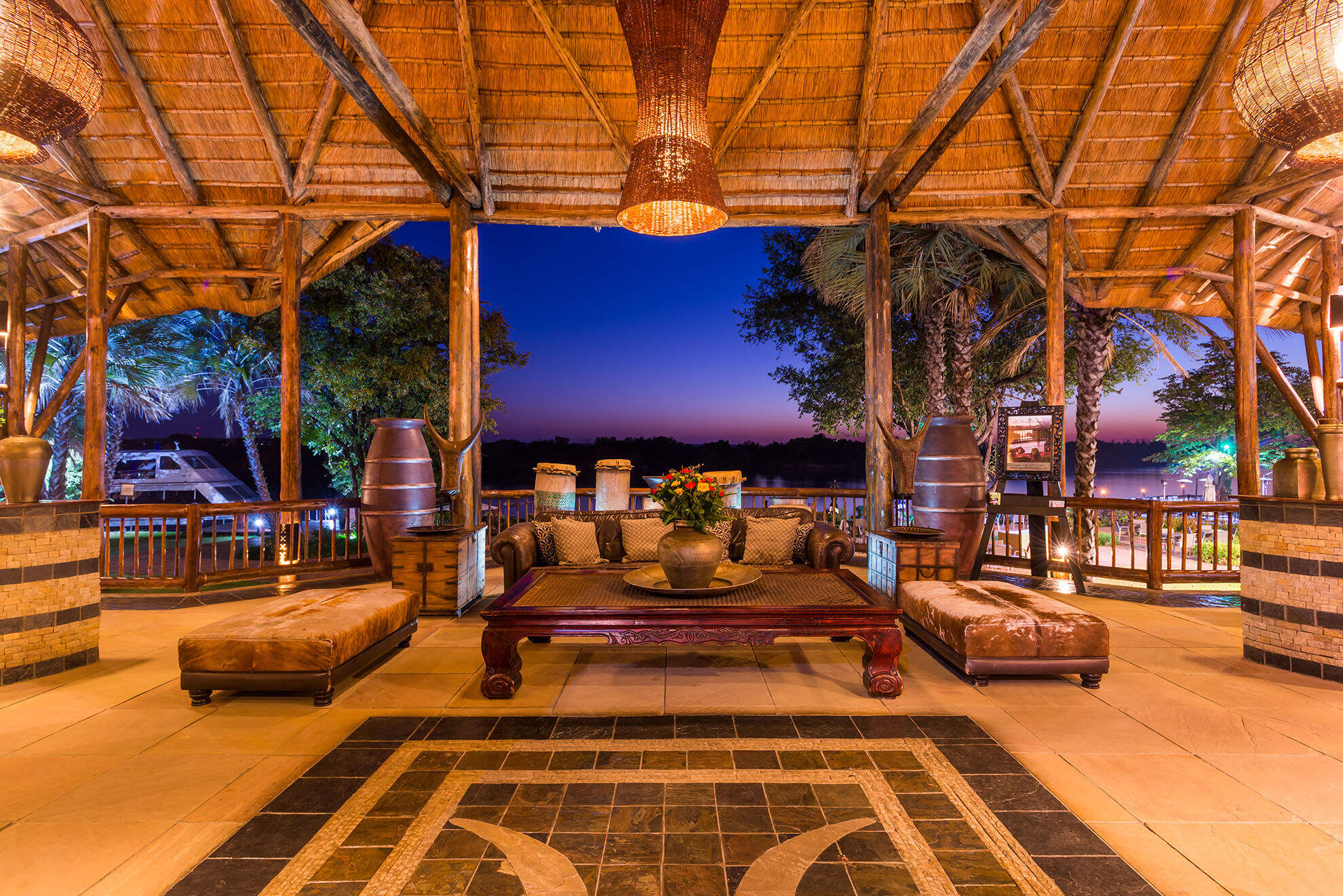 7 independent comments and wildlife information from our travellers who have visited David Livingstone Lodge and kindly agreed to share their thoughts. They do not necessarily represent the views of Expert Africa

2 nights Arrived 15 Oct 2014
"Lovey place to relax. All rooms have a small deck overlooking the river.

The food was good but the menu for lunches and snacks was quite limited.
Room rate includes free shuttle several times a day to the Falls or into town." See all these reviews: 12n in Zambia
Experience Report
Overall Rating:
Excellent
Location:
Excellent
Service:
Good
Rooms:
Excellent
Food:
Good
Dr & Mr G
Bangor

2 nights Arrived 20 Jul 2011
"Lovely relaxed place to chill out after safari, a 10 minute ride out of town, but on the banks of Zambezi and very peaceful. All the help you need to organize trips to the Falls, and more hair-raising activities like bunjee-jumping and gorge -swinging if you're up for them!

Beware of the baboons coming into the room.

Just a little way out from the falls but easy transfer by Lodge bus or taxi.

ACTIVITIES: You must take the Microlite flight over the falls. And visit the "Walk with Lions" reserve. Superb evening during full moon to walk around falls and to see moon-rainbow over the falls (rainbow is white not multi-coloured)." See all these reviews: 11n in Botswana; 3n in Zambia
Experience Report
Overall Rating:
Excellent
Location:
Good
Service:
Excellent
Activities:
Good
Rooms:
Good
Food:
Good
Facilities:
Good
Mr & Mrs S
Berks

1 night Arrived 18 Oct 2008
"Only one day, good pool and room and opportunity to relax. Another microligth opportunity. the buffet was very poor indeed wheeras breakfast was excellent.

One of our party fell on a step going to teh health spa and it si in a positino where ti will cause other accidents" See all these reviews: 10n in Zambia; 6n in Botswana
Experience Report
Overall Rating:
Good
Location:
Good
Service:
Good
Activities:
Good
Rooms:
Excellent
Food:
Average
Facilities:
Good
Night Herons
Surrey

"So near and yet so far"

2 nights Arrived 23 Aug 2008
"Although we liked the decor, style and layout of the room and found the main entrance hall attractive, to have stayed here any longer would have frustrated us immensely.

The buffet in the restuarant was bland international hotel fare. The staff were polite but clueless. The concept of us actually wanting to leave the hotel (on anything other than organised tours) and thus need a taxi was completely alien to one and all. Cue mystified looks, interminable waits and finally some random obviously non taxi driver in a clapped out banger would finally appear to charge a king's ransom in USD each way to the town or the falls.

The hotel's infinity pool is lovely - until you see the huge barriers, grilles and spikes in front of it, in the same way that the river view from the room is great until you see the electric fence and the prominent warning sign in front of it. The location by the Zambezi is also great until one realises that it is equally inconvenient for the falls and the town but right by Batoka Land - the local heliport which could be heard in the background on a frequent basis.

In fairness, they did welcome us with a bottle of bubbly in our room on arrival. A nice touch, but their follow on was well meant but farcical. The Housekeeper turned up as we were showering before dinner. She expressed surpise that we were still in our room (a simple check with the dining room could have informed her), then went on to explain why she was carrying a reed mat and a length of material. Apparently, she was going to leave both on the floor, while we were meant to be out, along with the bubbly. The accompanying letter would supposedly explain that the material should be used as part of the local marriage ceremony. She was dismayed that we, in our ignorance, had already drunk the wine. Simple choreography to get all elements together, one would have thought. Had it all worked, however, the letter would have left us none the wiser as to what we were meant to do with the mat and material as it made no mention of it whatsoever. Really kind thought, but botched execution." See all these reviews: 13n in Zambia
Experience Report
Overall Rating:
Average
Location:
Poor
Service:
Poor
Activities:
Good
Rooms:
Good
Food:
Average
Facilities:
Good
Mr & Mrs B
Teddington

2 nights Arrived 22 Aug 2008
"Very high class, but too commercial for us – the ethos was very much on profit (everything charged for, and very expensive) and the other guests were very arrogant.

However it was a little far from the falls and you could tell that the hotel was new, as some areas were unfinished and staff not fully up to speed." See all these reviews: 12n in Zambia
Experience Report
Overall Rating:
Good
Location:
Good
Service:
Average
Facilities:
Average
Rooms:
Good
Food:
Good
Showing 1-7 of 7
86%
7 reviews of David Livingstone Lodge by travellers since August 2007
Overall rating by our travellers
3
3
1
0
0
Filter by month

Other lodges in Livingstone & Victoria Falls

Just a few minutes walk from the Victoria Falls, good facilities, lovely grounds and adequate rooms at a modest price make Avani a good choice for a short visit.

Conveniently located just a short walk from the Zambia. side of the Victoria Falls, the colonial-style Royal Livingstone has beautiful grounds and small but quite luxurious rooms.

Secluded on the banks of the Zambezi, less than 20km from the Victoria Falls, Tongabezi is one of the most exclusive lodges in Zambia.

In a lovely location on the Zambezi upriver of the Victoria Falls, Islands of Siankaba provides a tranquil setting to relax at the start or end of a safari to Botswana or Zambia.

Offering great value for money and within easy reach of the Victoria Falls, Waterberry is a small, family-friendly lodge on the banks of the Zambezi River.

The new Toka Leya Camp stands beside the Zambezi inside Mosi-Oa-Tunya National Park – so wildlife often passes through. It's a comfortable tented camp which has great service and includes a range of activities.

Stanley Safari Lodge has views of Victoria Falls spray from all the rooms, and is a convenient base for exploring the Zambezi River area.

The River Club, near Zambia's town of Livingstone and the Victoria Falls, overlooks the Zambezi River.

Sindabezi, near Zambia's town of Livingstone and the Victoria Falls, is an island in the middle of the Zambezi River

Rebuilt in 2017, Thorntree River Lodge is one of the best riverside lodges in Livingstone, with a strong sense of the environment and straightforward access to the Falls.

Sussi & Chuma combines a luxurious, laid-back camp with a good location on the Zambezi River, with quick access to the Victoria Falls.

Tangala House, the family home near Zambia's town of Livingstone and the Victoria Falls