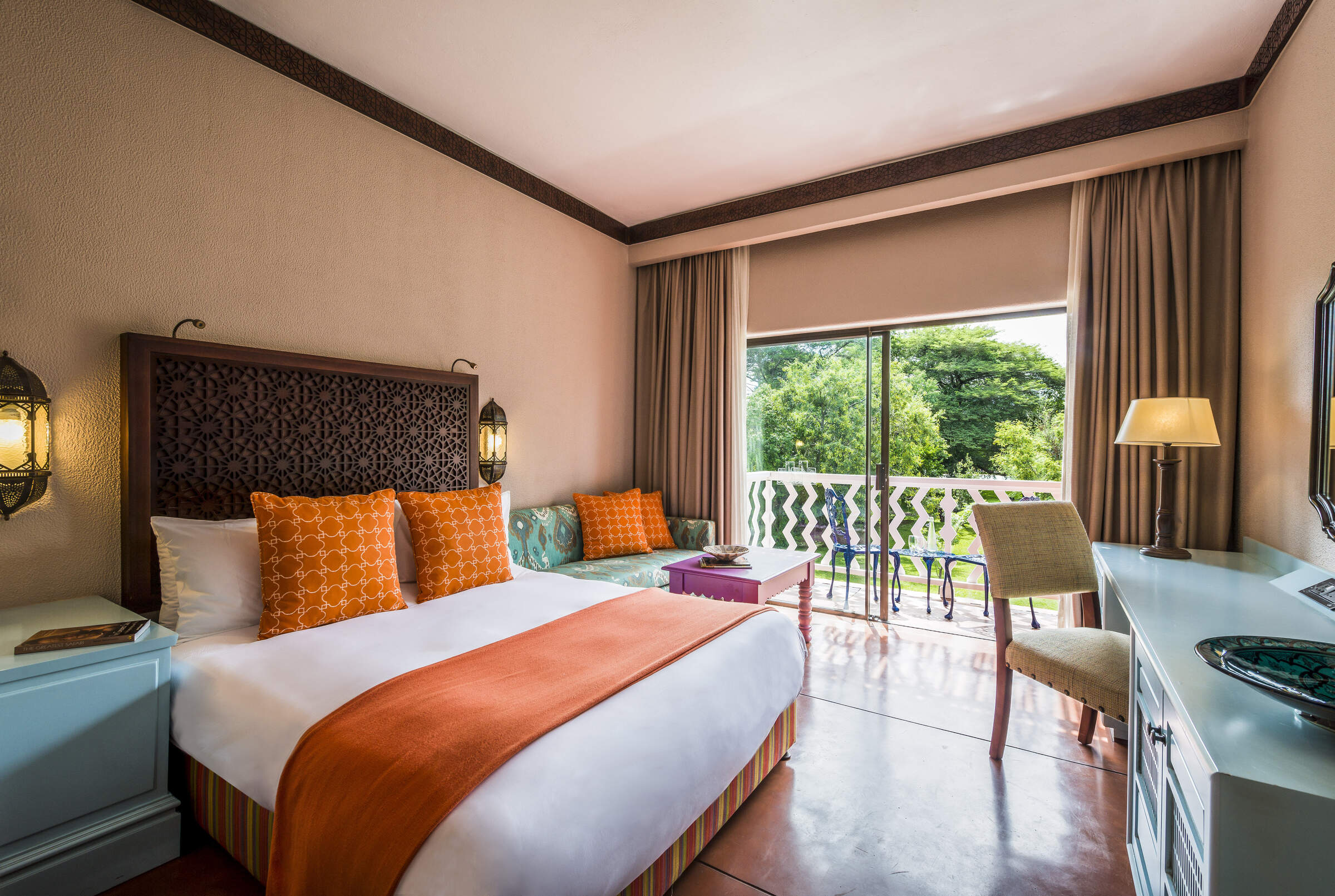 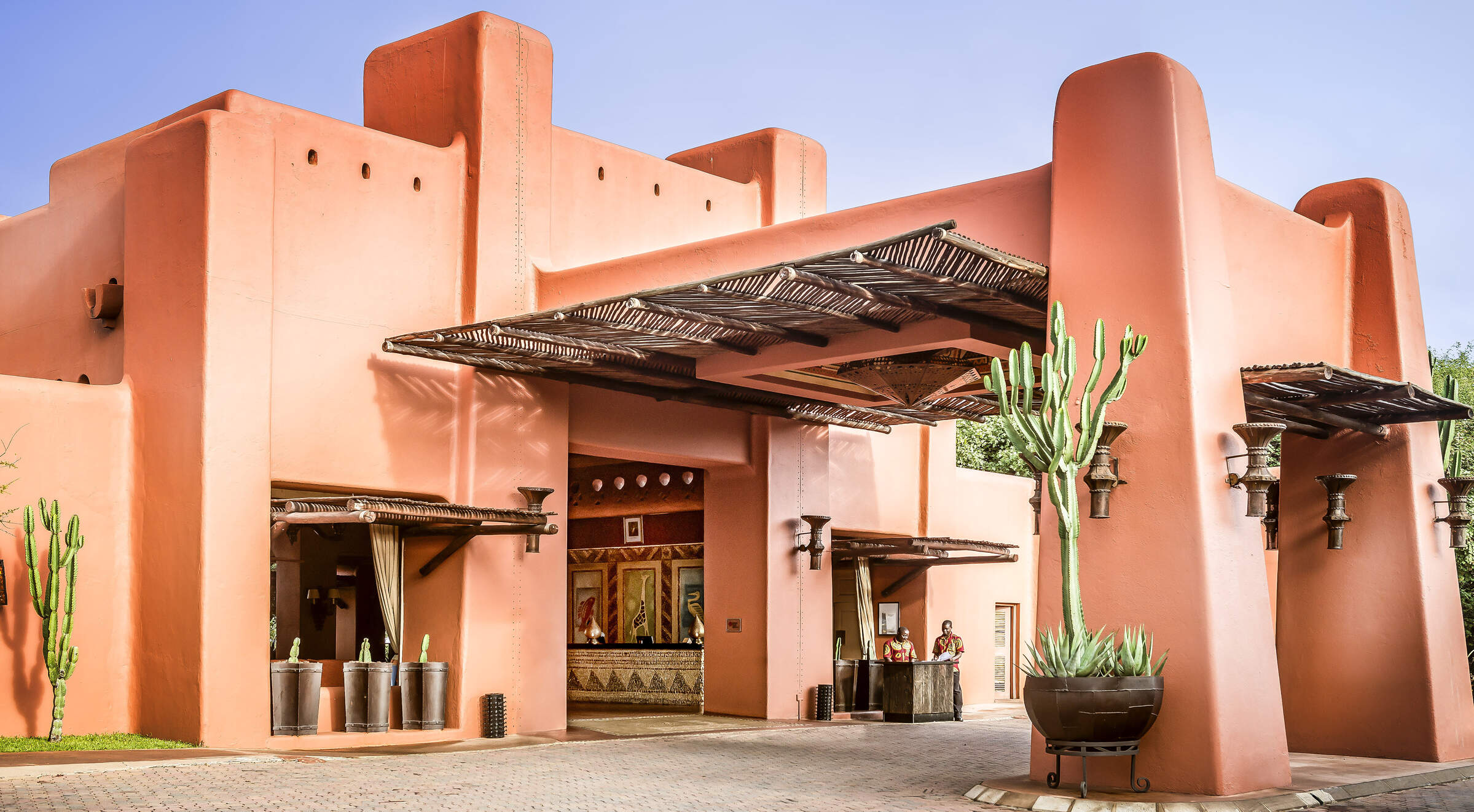 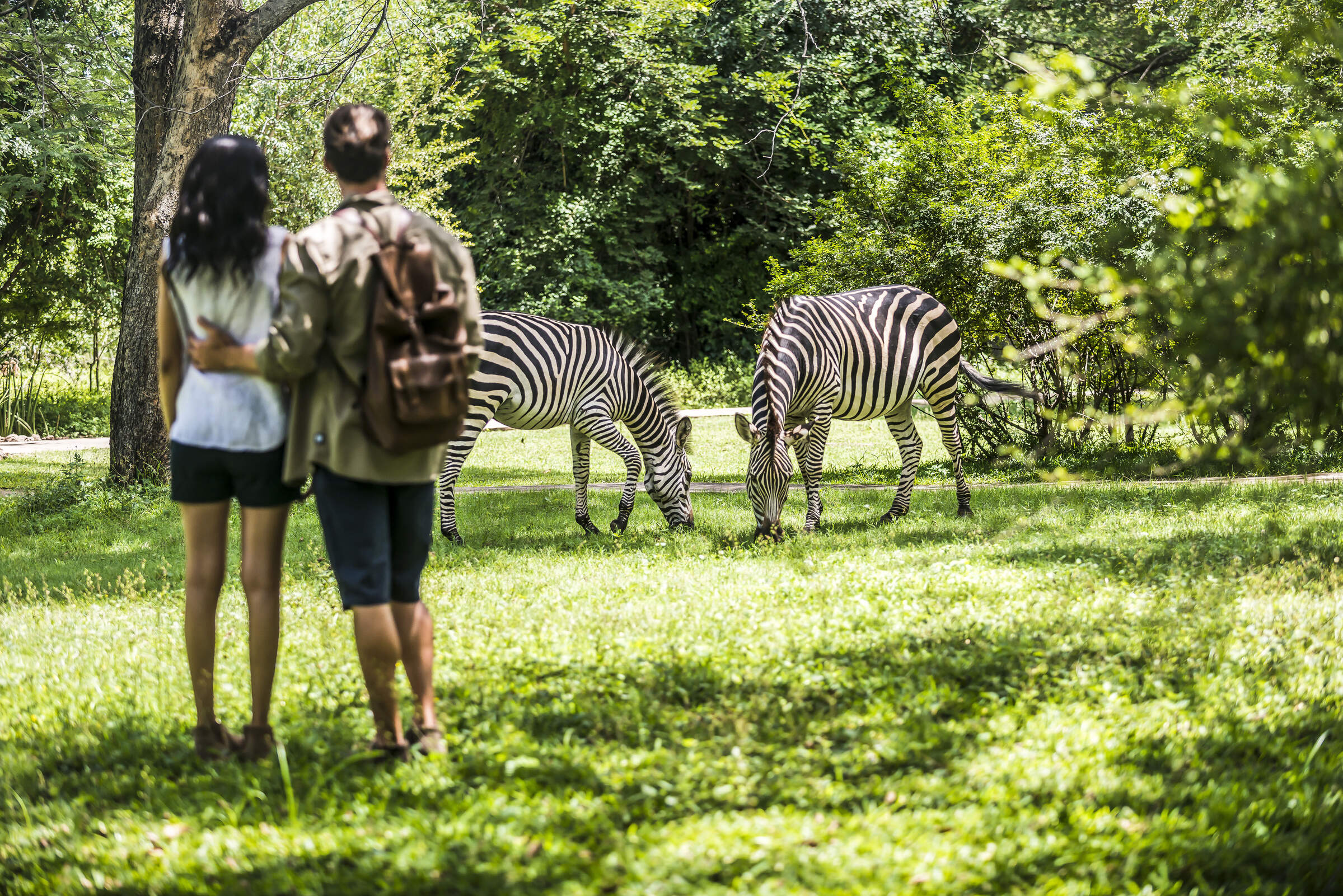 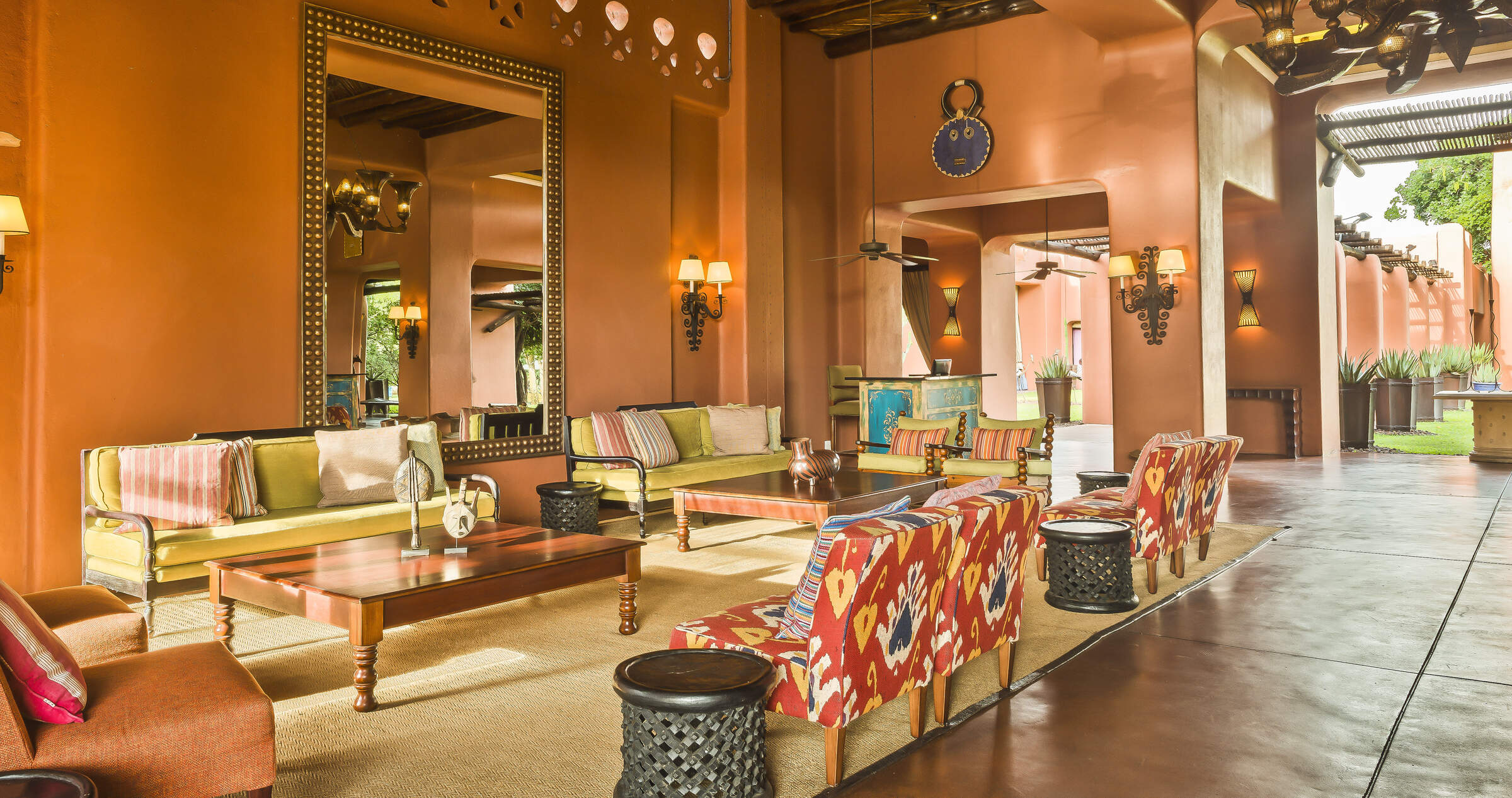 219 independent comments and wildlife information from our travellers who have visited Avani Victoria Falls and kindly agreed to share their thoughts. They do not necessarily represent the views of Expert Africa

2 nights Arrived 27 Sep 2019
"Sept 27+28: Lovely resort within the Mosi-oa-Tunya National Wildlife Park. Surreal to see impalas and monkeys all over the lawns and zebras drinking at the pool! Grounds are beautiful - there is a little nature trail with hide to watch birds in a small lagoon. Easy walk to the Zamibian side of Victoria Falls with free access to the park. Falls were completely dry but still interesting. Baboons grooming and walking right by you on the walkways.

Breakfast buffet was plentiful and delicious - staff were very friendly. I did walk over the bridge to the Zimbabwe side of the Falls. Park entrance was $30USD. More people trying to sell you things on the walk over, which was a bit farther than I thought, but completely doable. The Falls were spectacular though and worth the hike!

I also walked into Victoria Falls, which has a lot of shops and restaurants whereas the Avani and Royal Livingstone are not near the commercial center of Livingstone. I would definitely recommend staying at the Avani!" See all these reviews: 12n in Zambia
Experience Report
Overall Rating:
Excellent
Location:
Excellent
Service:
Excellent
Rooms:
Excellent
Food:
Excellent
Facilities:
Excellent
Sightings Report

2 nights Arrived 22 Sep 2019
"We chose the Avani for its convenience to Victoria Falls, and we weren't disappointed. We arrived early afternoon and were able to walk to the Zambian side of the Falls very easily from the hotel The following day we walked from the hotel across the Victoria Falls Bridge to see the Falls from Zimbabwe. We enjoyed the walk and queuing up with the locals to go through immigration, but that mightn't be for everyone. The Falls were certainly worth seeing from both countries, even though there was little water this year.

Our room on the first floor at the Avani was very good. There was plenty of variety at the buffet breakfast. We had the buffet at the Boma the first evening with a wide variety of dishes, including a action of Zambian dishes, Pan African dishes as well as international dishes. There was live music and performances of local dances.

The following evening we used the hotel's shuttle to the Royal Livingstone, the sister hotel, to have a drink and snacks, watching the sunset over the Zambezi. We then had dinner at the Avani Pool bar.

3 nights Arrived 3 Sep 2019
"NO COMMENTS BUT DID SAY THERE WAS LIGHTS OUT ON THE STAIRS TO OUR ROOMS WHICH COULD HAVE BEEN A DANGER, WE ASKED TWICE FOR REPLACEMENT BUT THIS WAS NOT ACTED ON.

THE FALLS WERE NEARLY DRIED UP BUT THIS WAS DUE TO LACKING OF RAIN AND WOULD SUGGEST THAT THESE WOULD BE BETTER IF VISITED DURING OTHER TIMES OF THE YEAR." See all these reviews: 11n in Zambia
Experience Report
Overall Rating:
Good
Location:
Excellent
Service:
Good
Rooms:
Good
Food:
Good
Facilities:
Good
Sightings Report

2 nights Arrived 26 Aug 2019
"A large hotel. Being the low season, not all restaurant options were available so choice vegetarians was limited.

However, the location is excellent for Victoria Falls - if your aim is to visit the falls it is the best place to stay as it is straightforward to walk to both the Zambian and the Zimbabwean side of the falls from this hotel." See all these reviews: 13n in Zambia
Experience Report
Overall Rating:
Excellent
Location:
Excellent
Service:
Good
Rooms:
Good
Food:
Average
Sightings Report

2 nights Arrived 23 Aug 2019
"We obtained our KAZA visas online prior to travelling.- they issue a Receipt for the $50.55 fee paid online plus a Letter of Authority to the border staff to issue a visa. The Zambian website and process were not entirely straightforward but it did save a very long and very slow queue at Livingstone airport.

It proved impossible to avoid the touts when trying to get a taxi from the airport to the Avani hotel. All demanded $30 but could be negotiated down to $25, which was slightly less than the $30 the Avani had quoted us for pre-arranging.

The Avani Resort was a most convenient and relaxing hotel; convenient because it was a 5 minute walk to the Zambian side of the falls and a 5 minute walk to the iconic bridge between Zambia and Zimbabwe; and relaxing because the hotel is 'open-plan', with 2-storey accommodation blocks arranged around a large grassed area in the centre of which is a large unheated outdoor swimming pool (cold in August!),outdoor bar and restaurant and the main restaurant. We just had a standard room, with bath and shower, on a B&B basis which was better value than including meals as food at the hotel was inexpensive, dinner typically costing £45 for 2 including beers. The included buffet breakfast was extensive.

Unfortunately, there was almost no water going over the Zambian side of the falls, apparently due to a 2 year drought. and no need for rainwear on the Zimbabwe side as negligible spray from the subdued falls that side. Nevertheless, the views were spectacular and we had no regrets.

We enjoyed walking from the Avani over the iconic bridge to the Zimbabwe side of the falls and also on into the town of Victoria Falls to the 'colonial style' Victoria Falls Hotel but persistent pestering by roadside vendors was annoying." See all these reviews: 10n in Botswana; 2n in Zambia
Experience Report
Overall Rating:
Excellent
Location:
Excellent
Service:
Good
Rooms:
Average
Food:
Good
Sightings Report

2 nights Arrived 22 Aug 2019
"Really nice large place to end journey with many activities nearby including free access to VIC Falls. On the bad side, helicopters and flights in the air all day - be warned. Perfect rooms, large pool area and good pool bar. The buffet was not up to the standard and price tag, perhaps just go for the fine bar menu. The staff were extraordinarily friendly. We would be happy to visit again in end of a trip. Super internet." See all these reviews: 21n in Namibia; 2n in Botswana; 2n in Zambia
Experience Report
Overall Rating:
Good
Location:
Excellent
Service:
Excellent
Activities:
Excellent
Rooms:
Excellent
Food:
Average
Facilities:
Excellent
Mr Lee
Chicago

3 nights Arrived 18 Aug 2019
"Loved the zebras eating grass out our sliding doors. Enjoyed the monkeys and impalas and nearby giraffes.

Great location and short walk to Victoria Falls and bridge to Zimbabwe.

2 nights Arrived 30 Jul 2019
"We had a very nice visit at Avani Victoria Falls. The rooms are clean and comfortable, and when we were cold at night the staff were happy to provide us with heaters (otherwise the rooms do get very chilly at night in the winter).

The grounds are lovely with a huge swimming pool, and zebra and monkeys wandering around. There were ample good quality food choices in the restaurants and at the buffet breakfast. We were certainly glad to be within the Victoria Falls park and it was easy to walk to the Falls.

Unfortunately the Falls only had a trickle of water when we were there (on the Zambian side). Apparently there had been lower rainfall than usual this year so we did not get to see the spectacular sight we had hoped for." See all these reviews: 9n in Zambia
Experience Report
Overall Rating:
Excellent
Location:
Excellent
Service:
Excellent
Rooms:
Good
Food:
Good
Facilities:
Good
Sightings Report

Other lodges in Livingstone & Victoria Falls

Conveniently located just a short walk from the Zambia. side of the Victoria Falls, the colonial-style Royal Livingstone has beautiful grounds and small but quite luxurious rooms.

Secluded on the banks of the Zambezi, less than 20km from the Victoria Falls, Tongabezi is one of the most exclusive lodges in Zambia.

In a lovely location on the Zambezi upriver of the Victoria Falls, Islands of Siankaba provides a tranquil setting to relax at the start or end of a safari to Botswana or Zambia.

Offering great value for money and within easy reach of the Victoria Falls, Waterberry is a small, family-friendly lodge on the banks of the Zambezi River.

The new Toka Leya Camp stands beside the Zambezi inside Mosi-Oa-Tunya National Park – so wildlife often passes through. It's a comfortable tented camp which has great service and includes a range of activities.

Stanley Safari Lodge has views of Victoria Falls spray from all the rooms, and is a convenient base for exploring the Zambezi River area.

The River Club, near Zambia's town of Livingstone and the Victoria Falls, overlooks the Zambezi River.

Sindabezi, near Zambia's town of Livingstone and the Victoria Falls, is an island in the middle of the Zambezi River

The four-star David Livingstone Safari Lodge is in a lovely spot on the edge of the Zambezi River in Zambia, close to the Victoria Falls.

Rebuilt in 2017, Thorntree River Lodge is one of the best riverside lodges in Livingstone, with a strong sense of the environment and straightforward access to the Falls.

Tangala House, the family home near Zambia's town of Livingstone and the Victoria Falls

Sussi & Chuma combines a luxurious, laid-back camp with a good location on the Zambezi River, with quick access to the Victoria Falls.