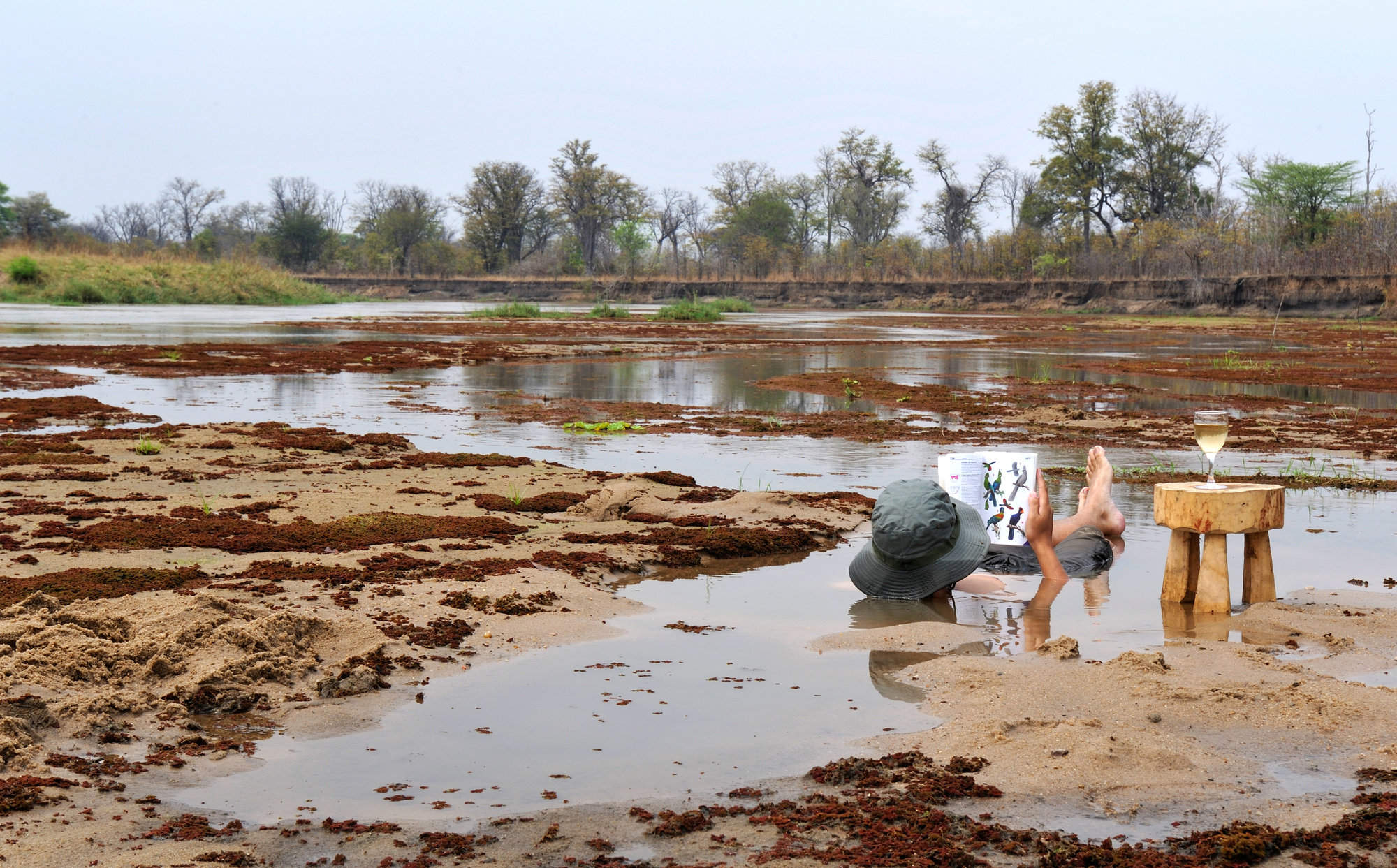 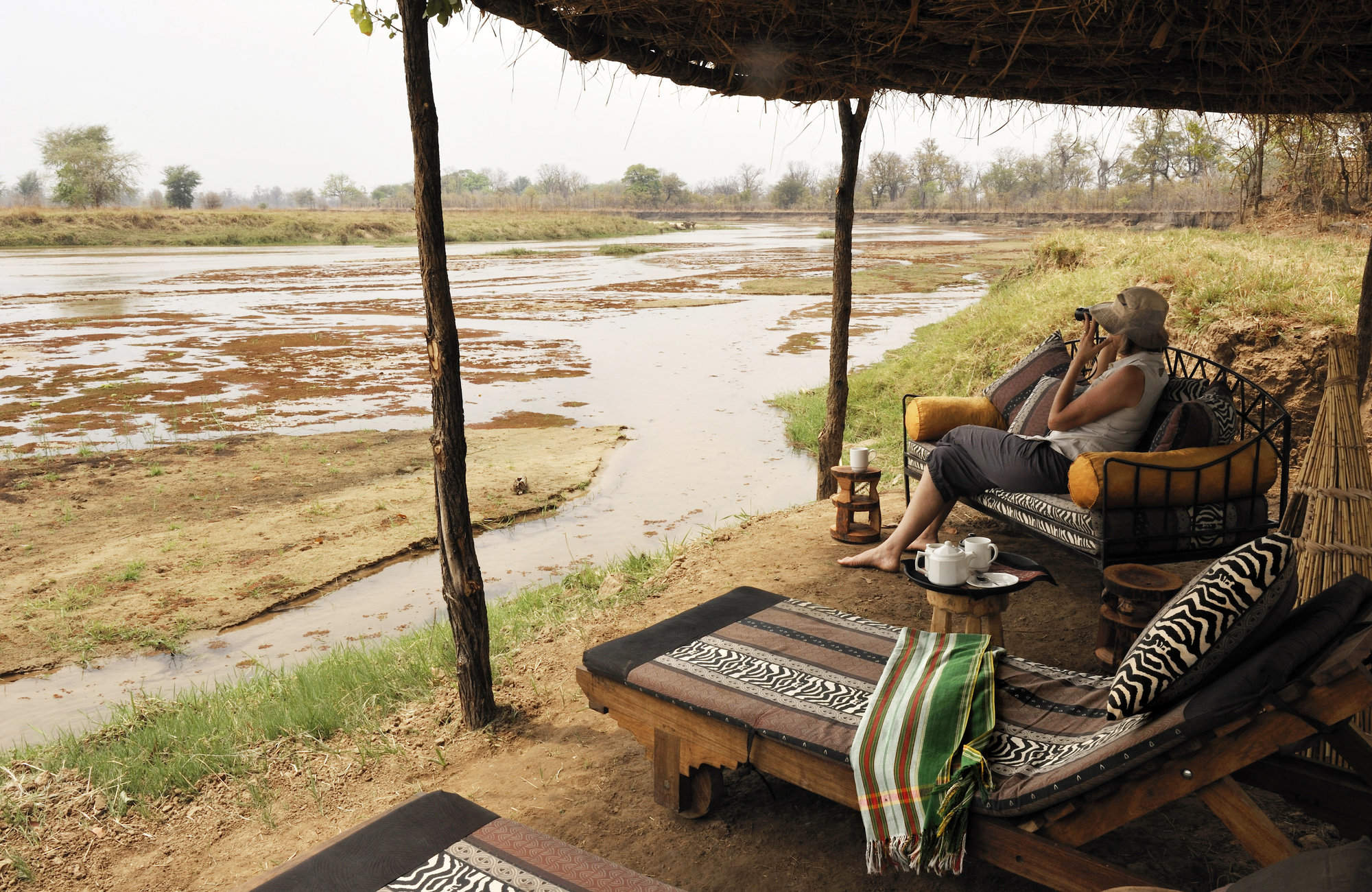 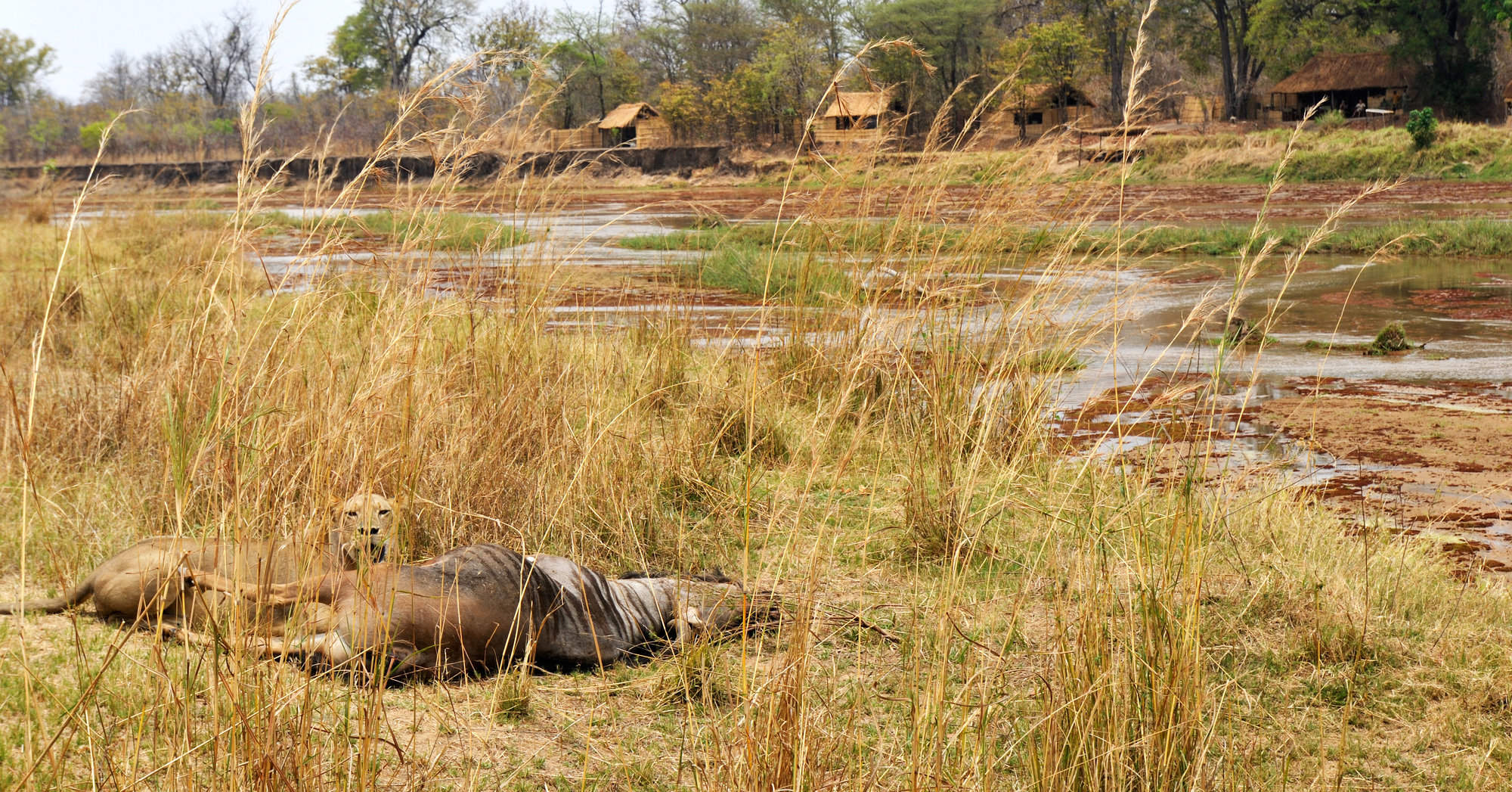 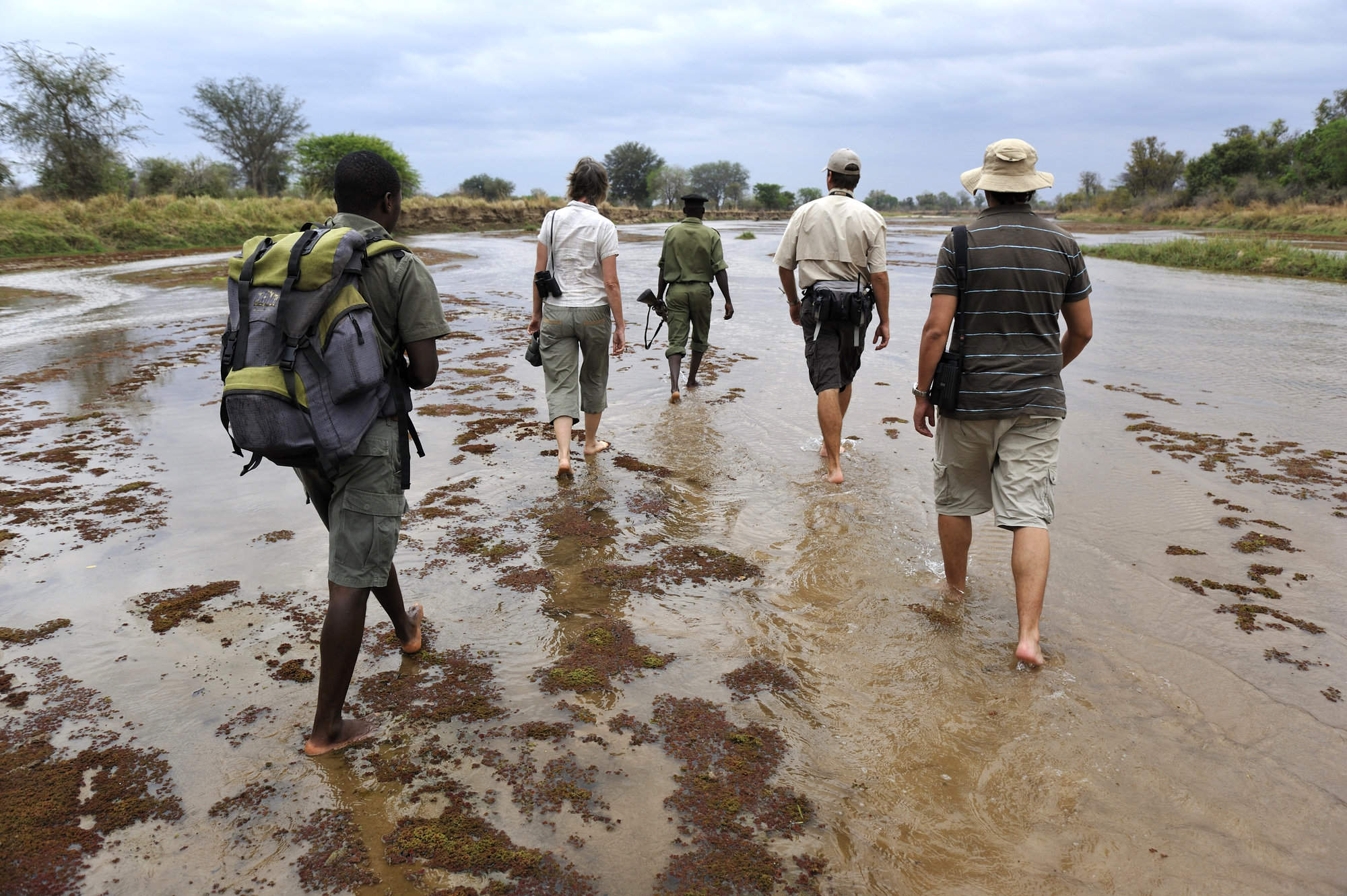 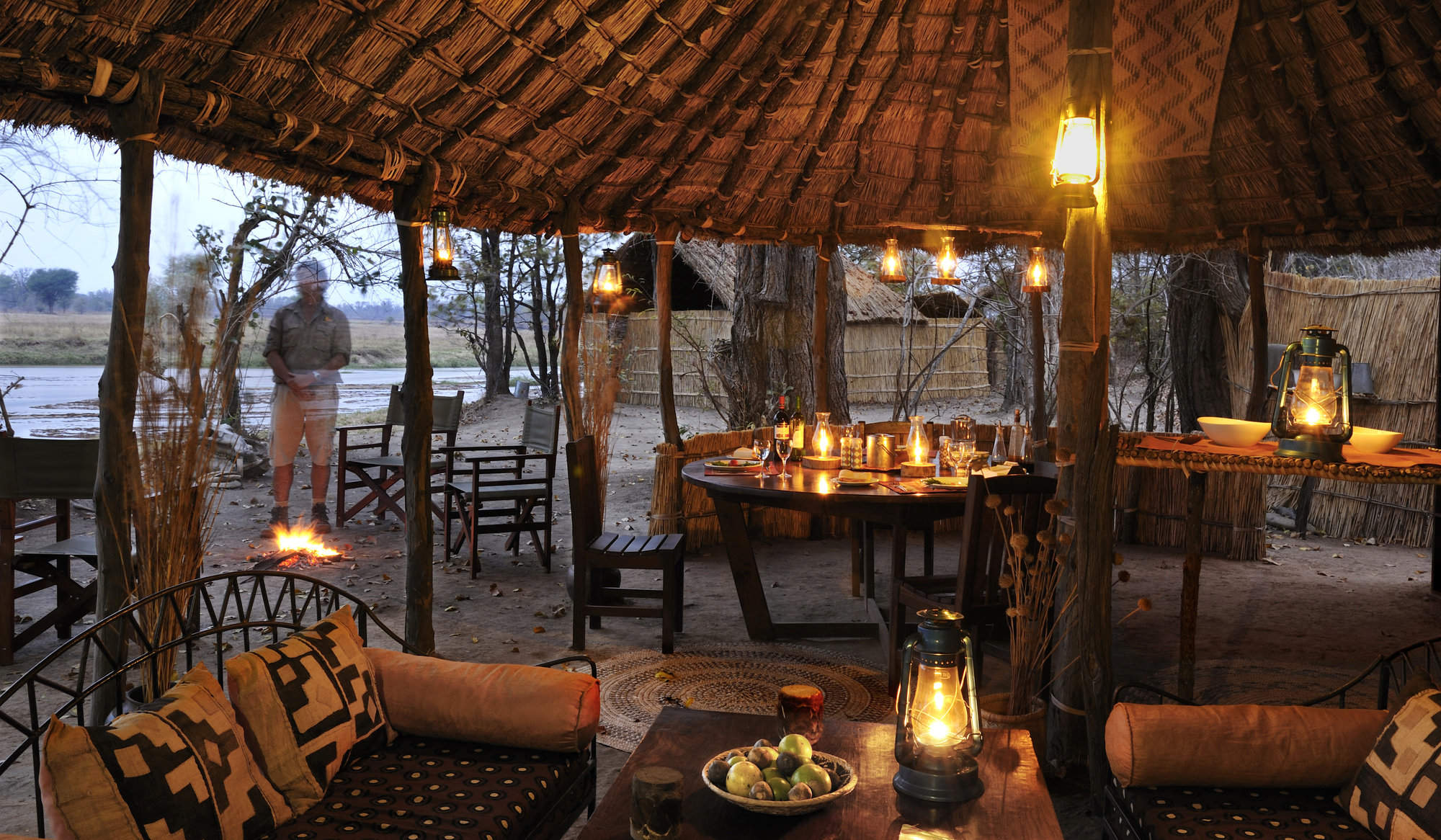 48 independent comments and wildlife information from our travellers who have visited Mwaleshi Camp and kindly agreed to share their thoughts. They do not necessarily represent the views of Expert Africa

4 nights Arrived 5 Oct 2012
"Mwaleshi is a very remote camp, usually reached by small plane. As at Chikoko, the rooms and facilities are a bit more rustic than at Tafika, but we still rate the rooms and facilities as excellent considering where they are. The morning hot water, for example, is delivered in a tin jug, through a hatch. Hot water for the shower is provided in the evening, after your walk. Food and friendly service were also excellent here. You certainly won't be losing weight on these trips!

Most trips are on foot, but with a limited number of drives. It the truck was used, it was usually to deliver the party to a remote location from which we walked. We did manage to have a night drive with spotting light - this gave our second view of wild dogs and was one of the highlights of the trip. The animals in North Luangwa are much more nervous than in the south, and here we had a couple of interesting interactions with them. Out for an evening walk, we came across an elephant who was not going to let us pass. After several retreats we made a final about turn. Once the elephant realised this he trumpeted in delight! Although exciting, we did feel perfectly safe - the guiding (as at all three of our camps) was very good and operated with safety in mind.

On another walk we encountered a herd of buffalo wanting to cross our path, we had to stand back and allow this. They seem so much larger and more intimidating when on foot that from the jeeps. Also out on a walk, we saw vultures circling; this led us to a tree with a leopard in it. Thanks to the excellent spotting by Special; we would certainly have missed it. If you are considering these walking camps - do it! You will not regret it." See all these reviews: 9n in Zambia; 4n in Malawi
Experience Report
Overall Rating:
Excellent
Location:
Excellent
Service:
Excellent
Activities:
Excellent
Rooms:
Excellent
Food:
Excellent
Facilities:
Excellent
Dr & Mrs C
Henley

5 nights Arrived 30 Sep 2011
"We dream of this place when we are away. It is so isolated, beautiful and satisfying with lots to see - especially if you look for little things and not just the main mammals. However this year we saw a lot of lions while walking with Greg & Special. A pride eating about 100 yards away; a large male sitting 30 yards away while he watched buffallo, then joining 11 others including 2 cubs.

Then we watched a kill 100 yards away on the river opposite the camp - lioness chased a Cookson (shame!) onto the opposite bank and into the waiting pride, which included 2 cubs. The short drive before walking 1 hour to the Mufa Lagoon is worthwhile as it is stunning - plenty of water and loads of elephants, hippo and other life. A grand place to sit for tea break.

3 nights Arrived 29 Sep 2011
"Of all the camps in the Tafika family, Mwaleshi is my favorite, probably due to its remoteness and the river with clear water running on your doorstep.

Starting or finishing your walk by crossing the river bare footed is simply magic, and the guides are always prepared with towels for getting that sand out from between your toes. Safaris here are almost predominantly walking, and for me, there is probably nothing that compares to walking up to lions on a kill on foot, never mind that you don't get as close as you would in a car.

3 nights Arrived 25 Sep 2011
"Our first time to this lovely intimate camp in the North Luangwa after a thrilling transfer in a small Cessna 206 from Tafika - thank you Brad! Greg, Special, Moffat, and the team, plus Timbwe, our National Park scout were all very welcoming.

This is a very different experience compared to being driven around in a Land Cruiser. Be prepared for frequent crossings of the Mwaleshi river, and on-foot encounters with elephants, zebra, wilderbeast, hippos, hyena, and a rather forlorn looking crocodile and other smaller animals. The larger cats were somewhat elusive during our visit, but they had been around. The walk to the Confluence is beautiful, and provides a very different perspective on the African bush.

Lovely brunch overlooking the hippos at the junction of the Mwaleshi and Luangwa rivers. Elephant in camp on our first night provided some excitement, while the experiment photographing the stars above camp on our last night only helped to reinforce how much light pollution we have in the UK - rarely have we seen the MIlky Way so bright. Be aware that by 10.30am the temperature is hot - a walk across the "badlands" to the airstrip at this time will bring this home!

3 nights Arrived 24 Sep 2011
"Mwaleshi lived up to expectations this time!

Excellent walking, guided by Alexander. We were the only two guests. The interaction between scout, guide and special was among the best we had. Enjoyed the "examination" before we let to fly back to Tafika. Walking pace gave room for discussions on all various aspect of the walk that came up. "Le chef" was the best of them all.

If I was being extremely picky, I'd say the only improvement would be more more ice/colder beer. Having said that, the staff, and Laurence in particular were pro-active in putting beer in the freezer to cool off. This is not a criticism in any way, this is a bush camp after all. Alternatively, damp socks work well!!" See all these reviews: 10n in Zambia
Experience Report
Overall Rating:
Excellent
Location:
Excellent
Service:
Excellent
Activities:
Excellent
Rooms:
Excellent
Food:
Excellent
Facilities:
Excellent
Dr & Mrs C
Henley

It is so remote and in a wilderness that has very, very few people and trucks so no chance of meeting anyone else while we are there. No chance of habituated animals here either. But it is comfortable and the standards of service and food are as Tafica. The Mwaleshi river has lots of animal activity along it, and the walking across is always fun.

Gerard Fagan had several high tech aids, Ipad and GPS, which were fun to use. As a guide he was superb - very experienced and great fun to chat with. We found the spoor of one of the escaped black rhinos, but couldn't find it.

I dream of this place and after our 3rd visit cannot wait to get back to this bit of paradise." See all these reviews: 14n in Zambia
Experience Report
Overall Rating:
Excellent
Location:
Excellent
Food:
Excellent
Facilities:
Good
Rooms:
Good
Activities:
Excellent
Mr W & Ms W
NL

"Mwaleshi, not what we expected"

3 nights Arrived 14 Sep 2010
"We had high expectations for this camp, especially after our stay in Chikoko, which was absolutely brilliant. We expected this to be a very special ending to our trip.

However, there were a few things that were a bit disappointing:
- The guide, Gerard, seemed to be new to the area and also new to his role as guide/manager of the camp. You could tell he was a really experienced guide, but he didn't seem to feel sure of himself. He was a very nice guy, but we expected a little more after Alex (our guide at Chikoko).
- We were warned beforehand that the wildlife in the North park would be more skittish and that we would see less. Still, we were disappointed. One morning we had a six hour walk in which we saw one hippo and one puku.
- The camp was much more crowded than we had expected. It was constantly full with six to eight guests. This meant that we had to walk to the airstrip to pick up incoming guests which was a long walk in the hot sun away from the water and the wildlife. At other times we would travel by car with nine people in a car designed for a maximum of six. Also, walks are limited to a maximum of seven guests, so when the camp was full some of us had to go on a drive.

We feel that Mwaleshi can be a great and magical place to stay, but for us it was let down by an inexperienced (for the area) guide and the fact that it was fully booked during our stay." See all these reviews: 14n in Zambia
Experience Report
Overall Rating:
Average
Location:
Excellent
Service:
Good
Activities:
Poor
Rooms:
Excellent
Food:
Excellent
Facilities:
Good
Mr & Mrs B
Glos

3 nights Arrived 2 Oct 2009
"Ernst was refreshingly laid back making this the most relaxed experience. For us a much more mature approach to bush safety - very aware but not molly-coddling.

Walks were very good with wading in the river (where the crocs weren't) and some good encounters in close cover. Ernst was very good at recognising what you knew, and what you didn't.