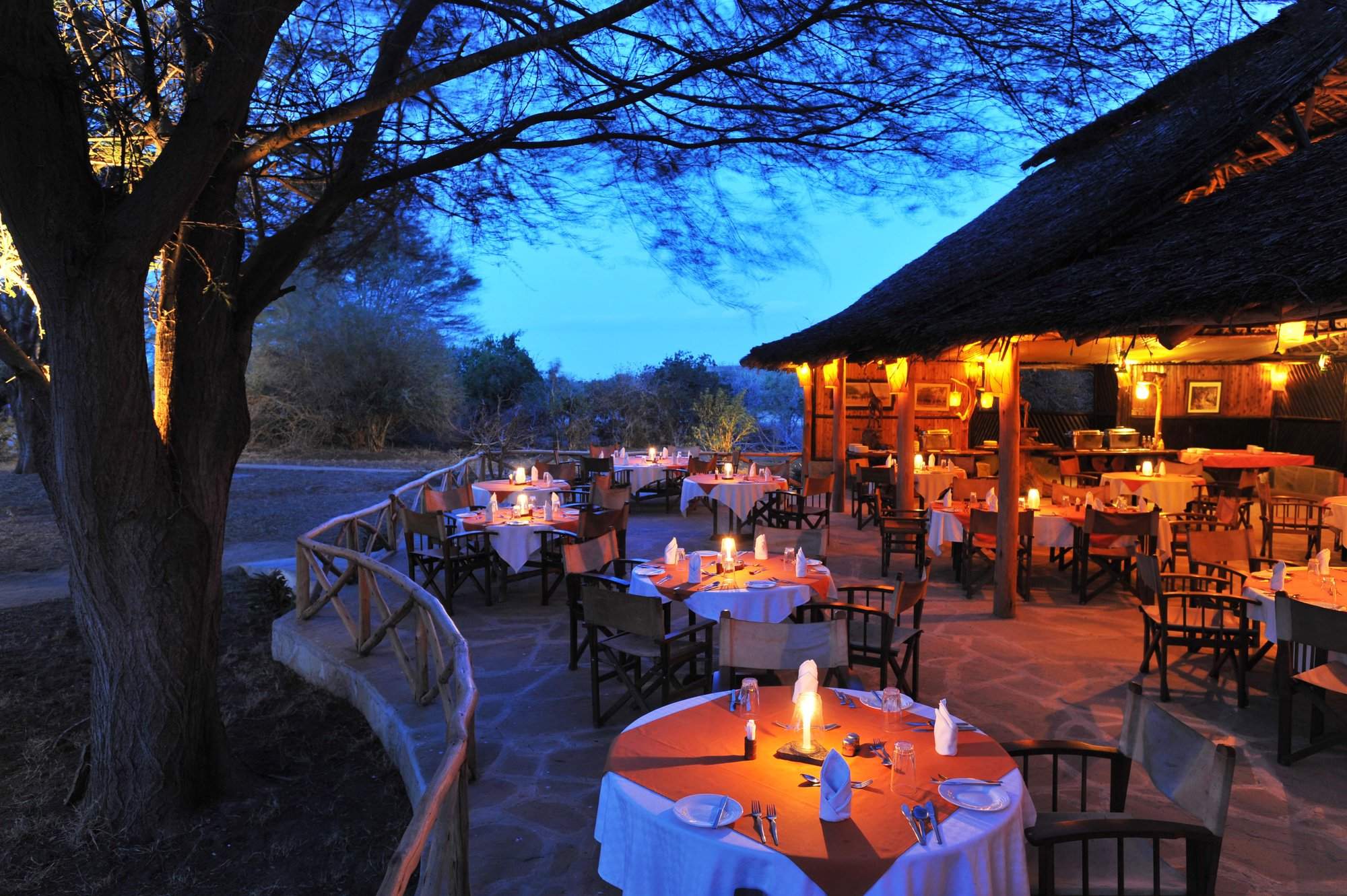 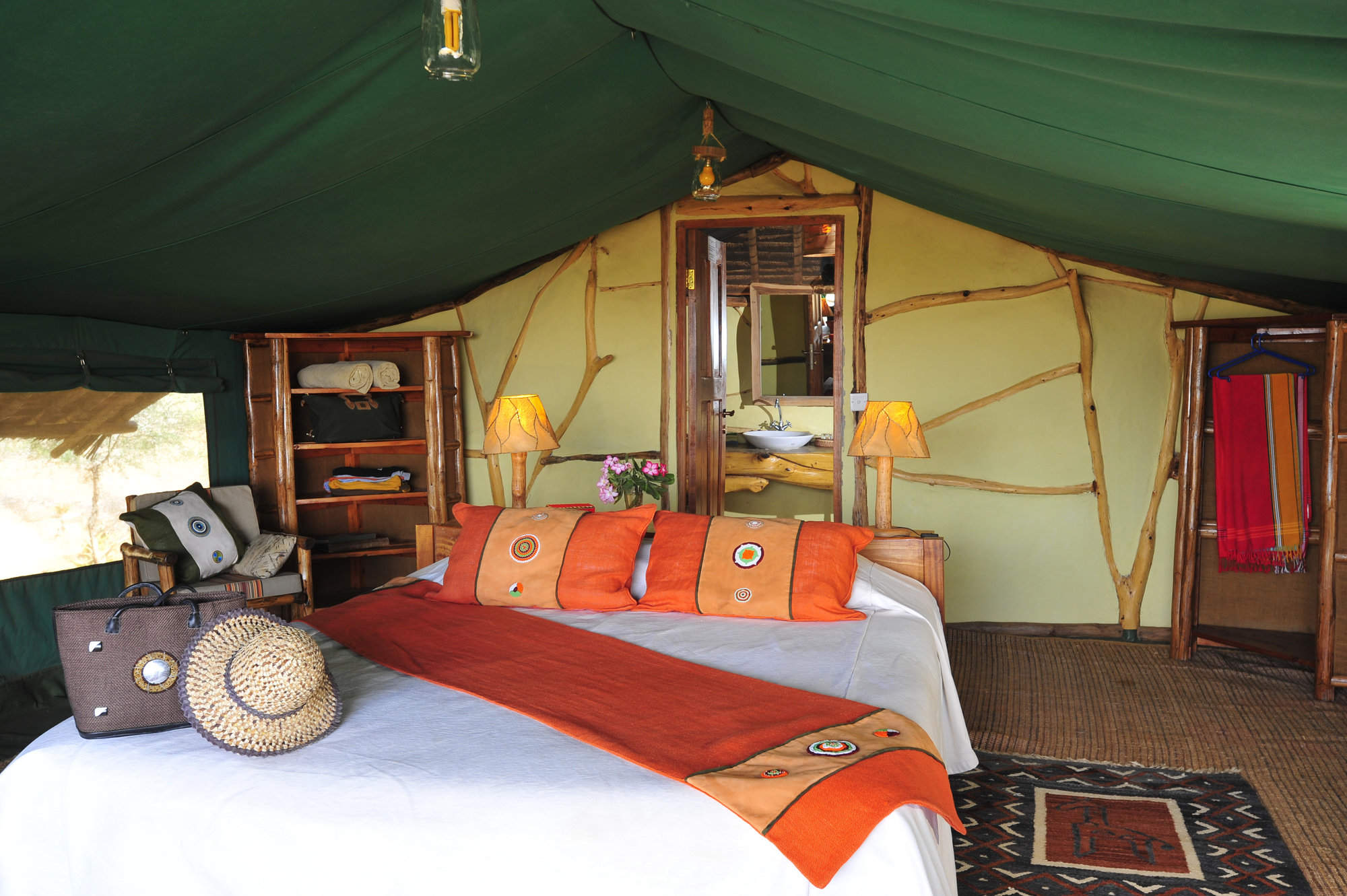 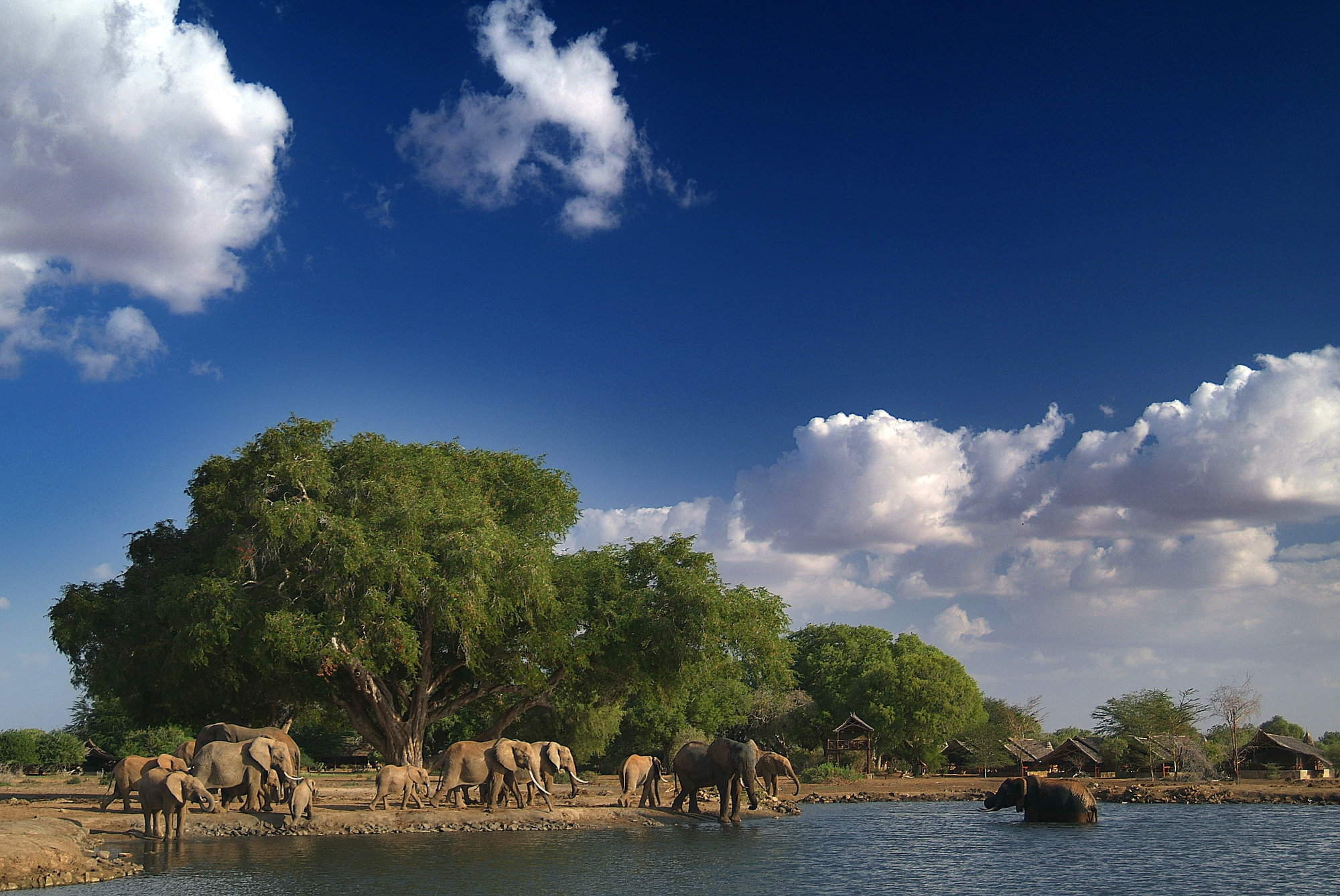 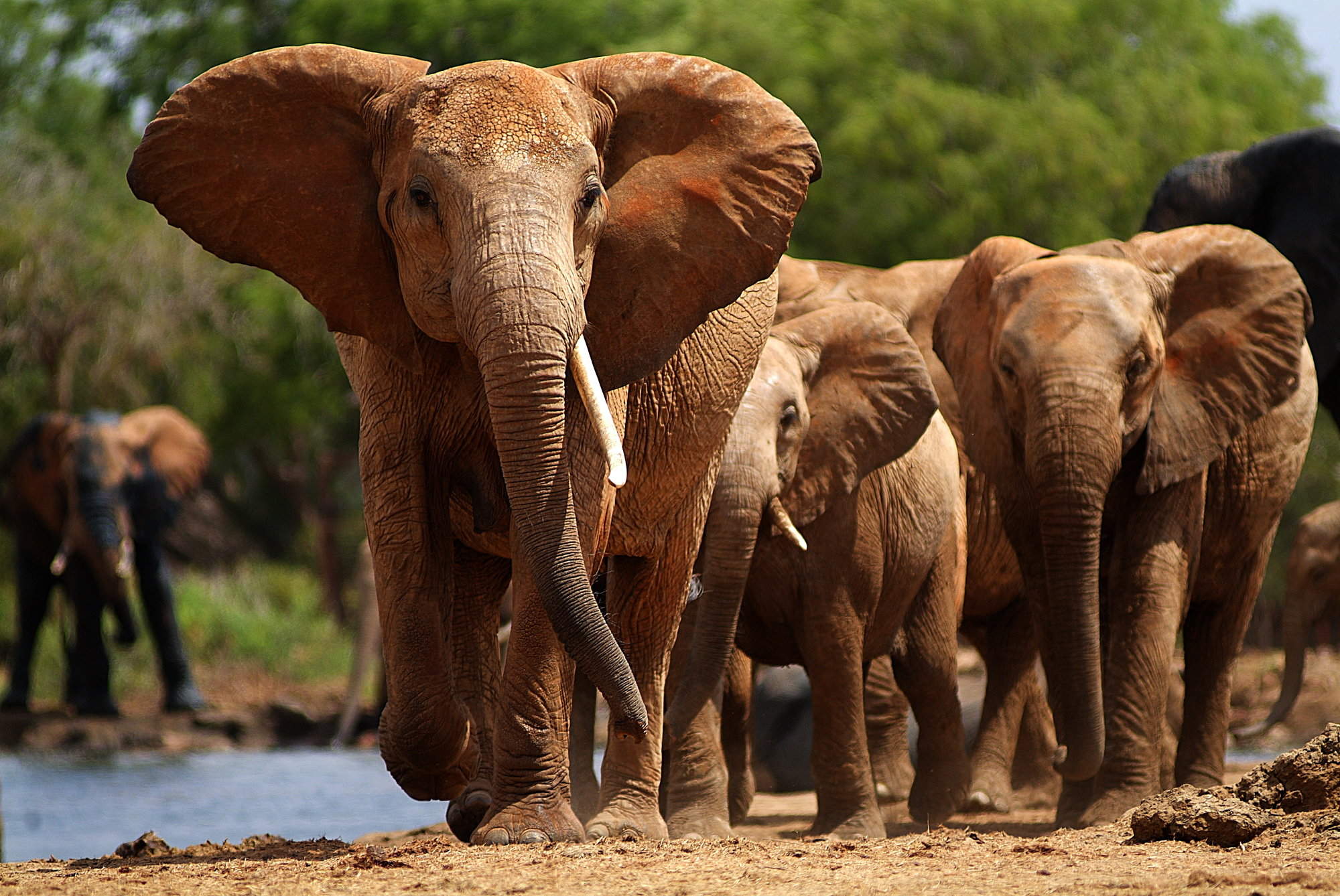 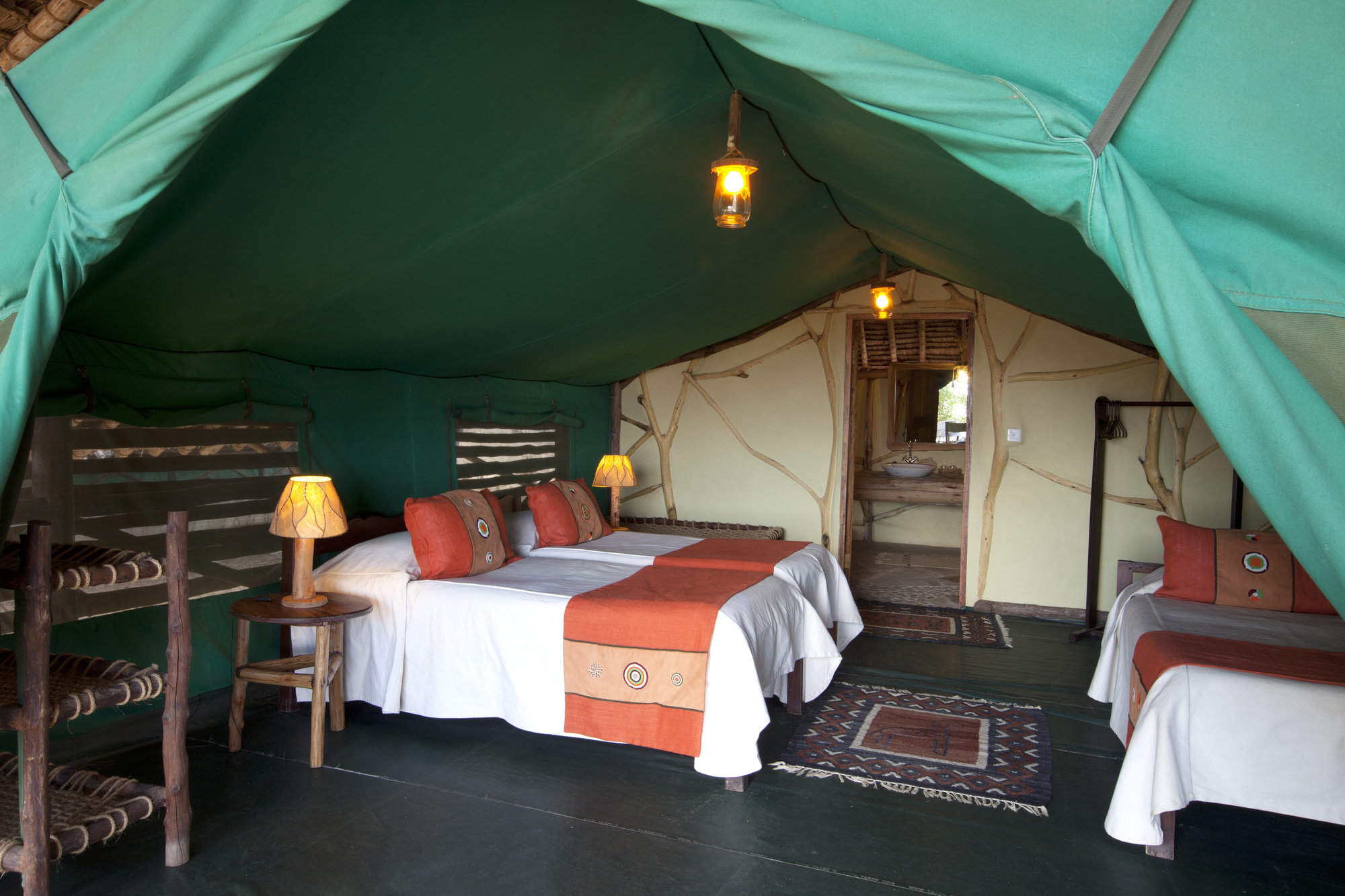 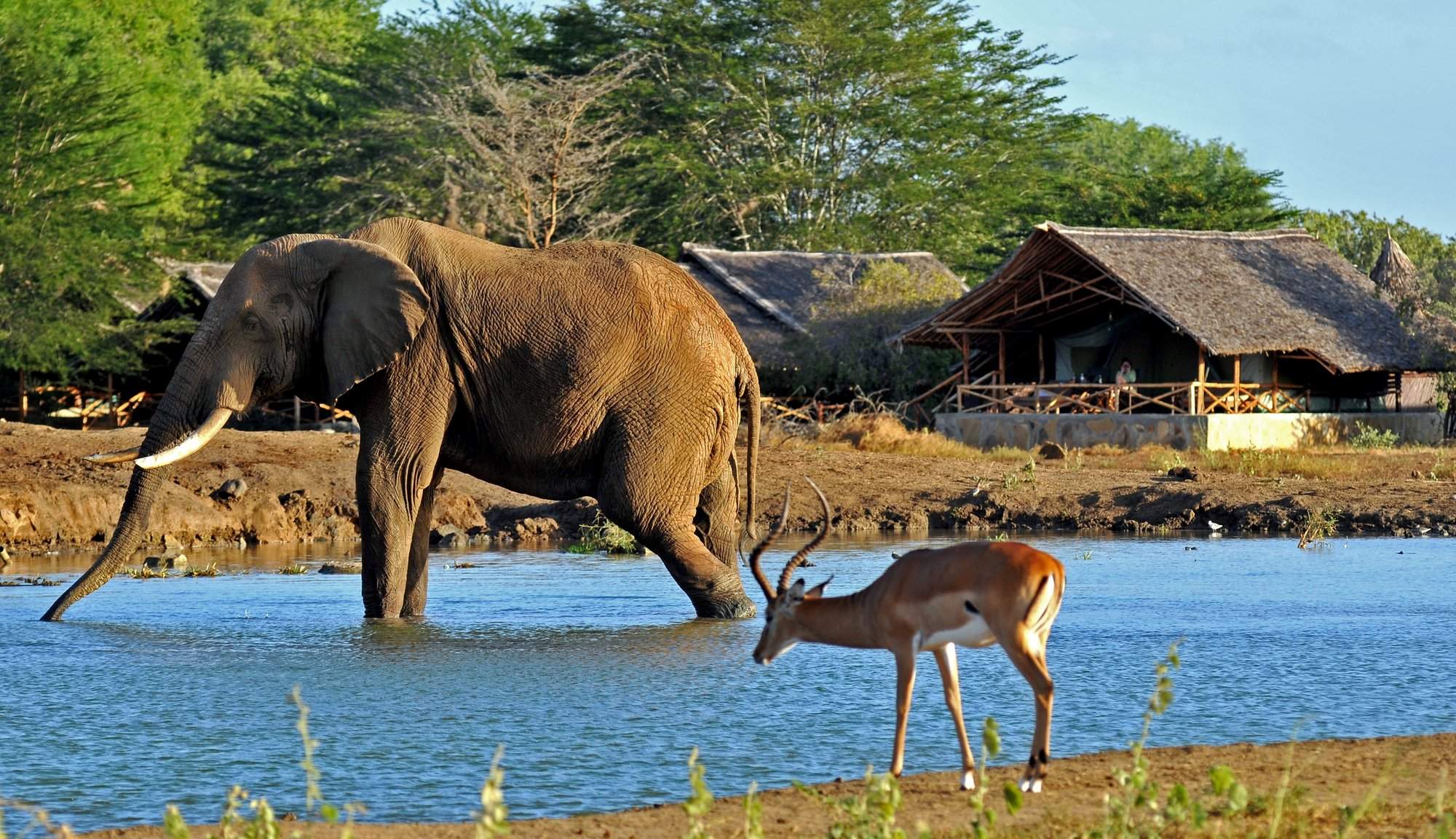 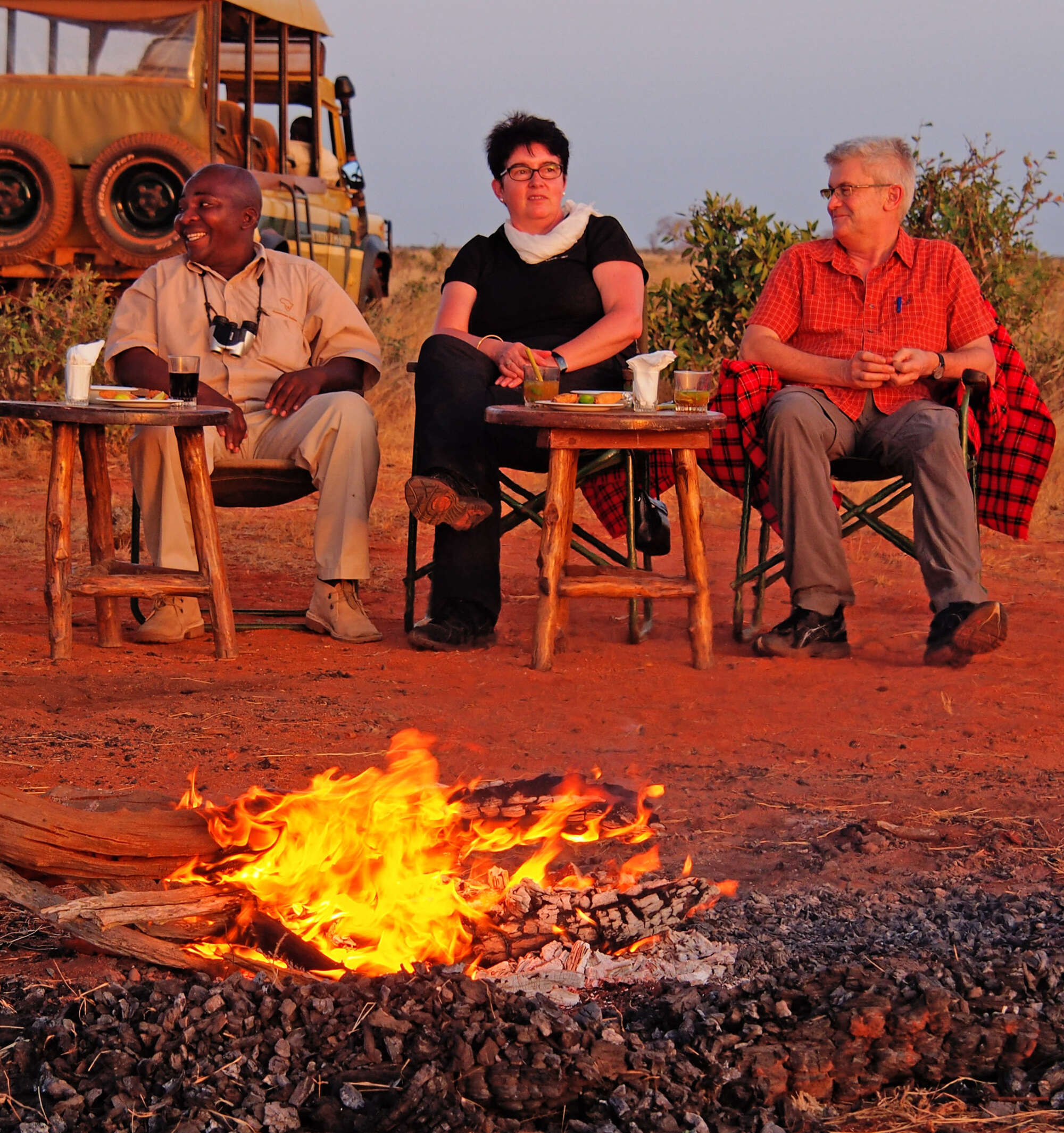 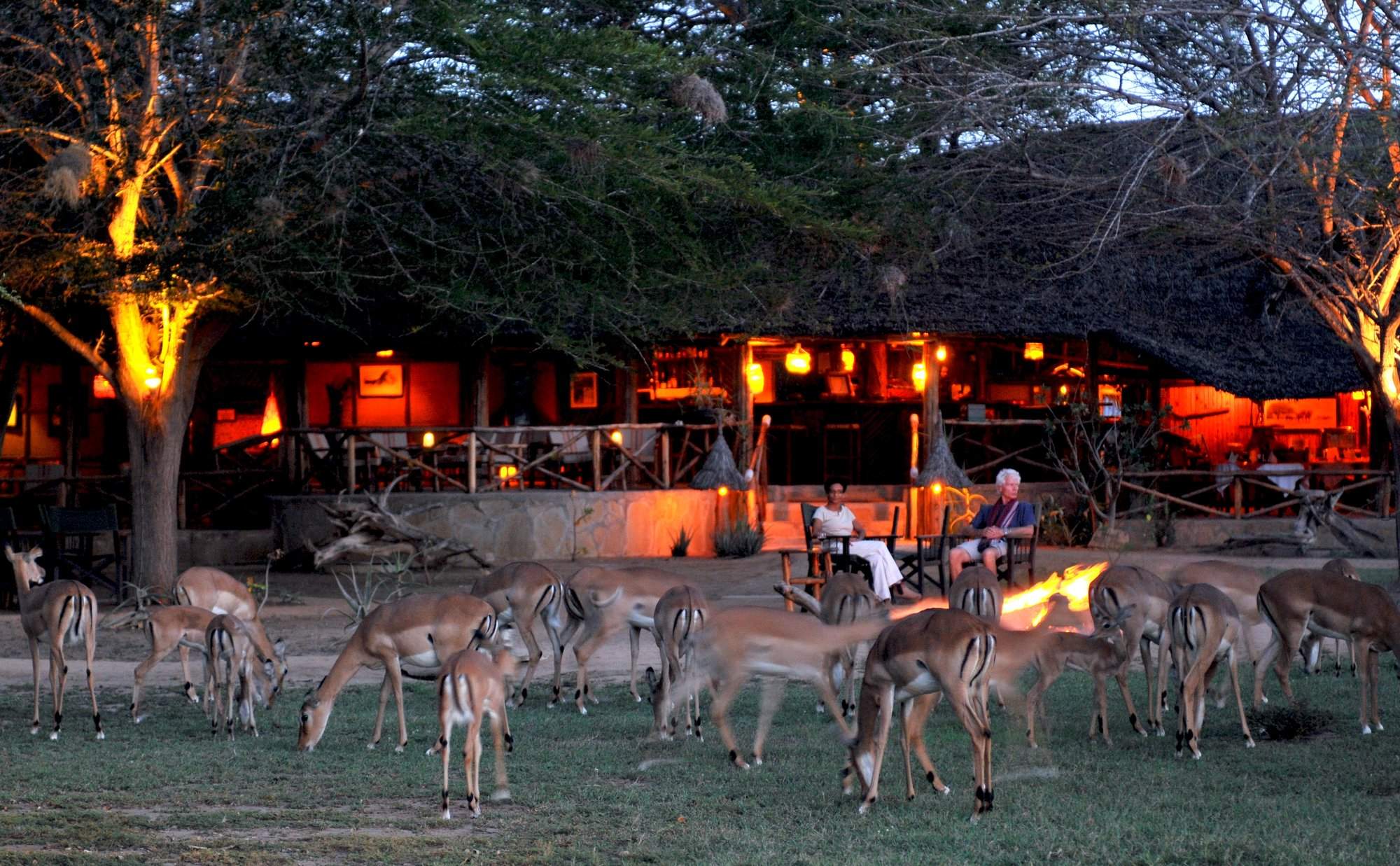 Spread out among tamarind and acacia trees near the seasonal Voi River, Satao Camp is the only camp in this ...

... area of Tsavo East National Park. Fairly large by safari standards, it is owned and managed by one of Kenya’s most respected safari companies, and is regularly visited by baboons, impalas, giraffe and hippo, while the central area is an oasis for birdlife and various nocturnal creatures, including genets: in the bar, one regular genet drapes himself on an overhead rafter.

Somewhat aptly, satao means ‘giraffe’ in the language of the Walingulu, the original, hunter-gatherer inhabitants of this area. As the camp is unfenced, all your movements after dark require an escort – which as a plus, as it gives you a shot of local cultural or natural history insight from your camp guard on every walk to and from the dining area. A paging button in each tent means that you can call an askari for an escort.

The permanent structures of Satao’s main central area are ranged out behind the sandy drop-off area where you arrive. Beyond the simple, open-sided reception building, spacious and shady dining and lounge terraces under high-pitched makuti-tile roofs are set on either side of a raised central bar area, with a campfire directly in front. Open plan and essentially open-air, these main areas are low-key and welcoming, but quite large. Away to the south is a fully open-air lunch area that has good views of the plains and a large waterhole.

Close to the waterhole, a high-level viewing deck known as the Lookout, with a shaded platform and directors’ style, canvas chairs, is accessed up a steer flight of steps. You can ask to be woken in the night if anything you want to see makes an appearance at the waterhole.

Electricity at Satao is supplied by generator, and is on all night as well as over lunchtime. There are charging sockets in all the tents.

The main activities at Satao Camp revolve around early-morning and late-afternoon game drives in well set-up 4WD vehicles. As Satao is the only camp in this part of Tsavo East – a vast expanse of the park covering more than 1,000km² stretches between the camp and the Mombasa highway – in most of this area you can drive for miles without encountering another vehicle. Tsavo’s famous red elephants, coloured by the iron oxide in the earth, are the most iconic of the park’s animals, which include good numbers of cheetahs and lions, and less common grazers such as gerenuk, lesser kudu and Grevy’s zebra. An hour’s drive to the north of the camp is the Galana River, which flows for nearly 100km through the park and can be closely followed for much of its course. There are several riverside viewpoints including Lugard’s Fall, and Crocodile Point (sometimes described as nature trails, but they’re basically just short footpaths), where you can get out and stretch your legs.

In the two decades since it was built, Satao Camp has matured into one of the most welcoming camps in southern Kenya. The herds of impala, the bull giraffe that wanders around camp, frequent elephants and lions at the waterhole, and a riot of birdlife together create a magical impact on first-time visitors – and one which doesn’t disappoint experienced travellers. The food at Satao isn’t a stand-out feature, and the high-voltage overhead power lines that run close to the camp detract slightly from the bush feel of the area, but many visitors are so captivated with the place that they barely notice them.

Usual board basis
Full Board & Activities
Food quality
Satao’s food is not its most outstanding feature. During our visit in 2012, the standard hotel/restaurant fare at dinner included good vegetable soups and homemade hot rolls, shredded salad with dressing, and a choice of grilled chicken, beef goulash or onion pizza for main course, with roast potatoes, chips or rice, and vegetables. One of us ordered goulash, but was served chicken, and the ‘vegetables’ consisted of just a grilled tomato. Dessert was banana split (ie a banana with vanilla ice cream and choc sauce). Breakfast was better: the passion curd to spread on toast was a nice touch.

Breakfast 6.00–9.00am is a buffet with an egg station and plenty of options, including home-made bread.

Dinner, from 7.30–pm to 9.00pm, is a six-course buffet or plated service, incorporating soup, salad, main course, dessert, cheese and coffee – with a choice of three main dishes and always a vegetarian option.

Attitude towards children
'No problem'
Property’s age restrictions
No restrictions
Special activities & services
There are nature walks in camp, with a naturalist, but there is nothing specifically designed for children.

Babysitting is available on request (no charge), using housekeeping staff or camp guards. Trained babysitters are not available.
Equipment
Three cots and two highchairs are available.
Generally recommended for children
Satao is a family-friendly camp with a relaxed ambience, and is a recommended choice for families, though an enthusiasm for the wildlife and the bush location is always important. With impala, baboons and even giraffe right by the tents, it is great fun for kids. Kicking a ball around isn’t an option, however, as there is wildlife everywhere. There’s no pool.

Since mid-2018, many of our travellers who stayed at Satao Camp have kindly recorded their wildlife sightings and shared them with us. The results are below. Click an animal to see more, and here to see more on our methodology.

Communications
As well as a landline phone, Satao has FM radio, email in the office and adequate WiFi in the lounge.

Each tent has a paging button, to guests can call for an escort or a drink.
TV & radio
The TV in the staff mess can be viewed by guests for big events.

Employment opportunities for nearby communities

Satao Camp is located inside Tsavo East National Park, surrounded by bushy grassland and open plains, semi-arid acacia scrub and woodlands. Nurturing a positive relationship with locals has been an on-going commitment which aims to provide employment opportunities and develop community empowerment projects. Approximately 85% of all employees are hired from the local Taita and Duruma communities, with a few others from the indigenous Waliangulu community.

Advantages of becoming a member of the family at Satao include adequate remuneration, daily briefing meetings for training and communication purposes as well as a health and safety policy. All kitchen staff benefit from bi-annual medical check-ups, and training on first-aid is provided for every team member. To ensure employee satisfaction, the camp has a staff welfare committee to handle staff issues and affairs.

Empowerment initiatives are extended to provide support to the local Miasenye and Marungu primary schools. Donations include linen, kitchen utensils, clothes and food.

Malarial protection recommended
Yes
Medical care
Satao has a first-aid box; ‘2 or 3 staff’ have received training and in theory get refresher training annually. Voi hospital is the closest major medical facility and can be reached in about 45 minutes in an emergency. Flying doctors from Nairobi or Malindi can land at Satao airstrip, just minutes from the camp.
Dangerous animals
High Risk
Security measures
Unarmed askaris patrol the camp day and night. Armed KWS patrols periodically patrol the area near the camp and can always be called quickly.
Fire safety
There’s a fire assembly point in the car park and all staff receive fire training twice a year. There are fire extinguishers all over the camp.

Disabled access
In Place
Laundry facilities
Full Laundry Service - Extra Charge
Money
The cashier has a safe box for safe keeping of valuables, but there are no safes in tents. There’s no formal foreign exchange service.