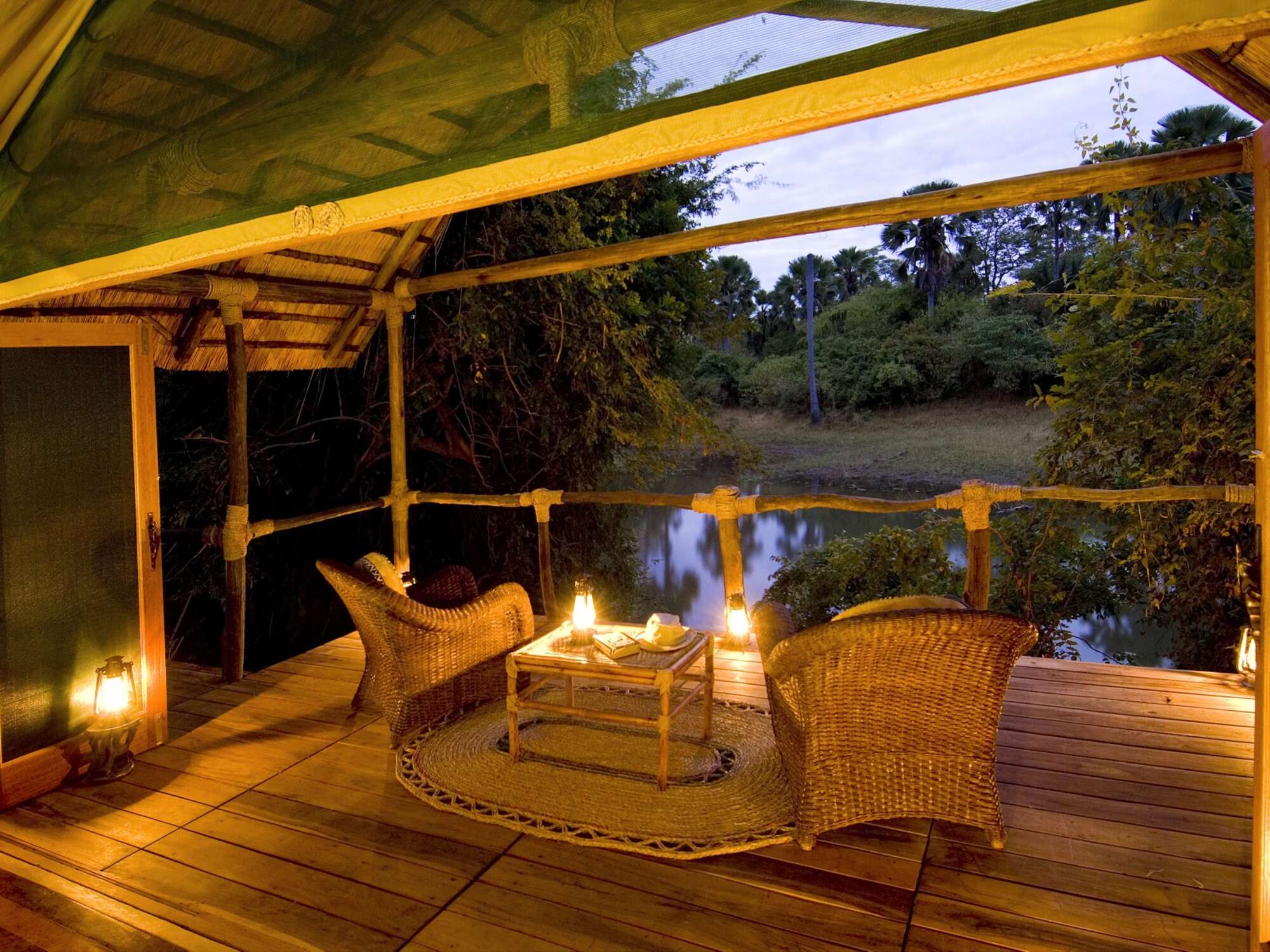 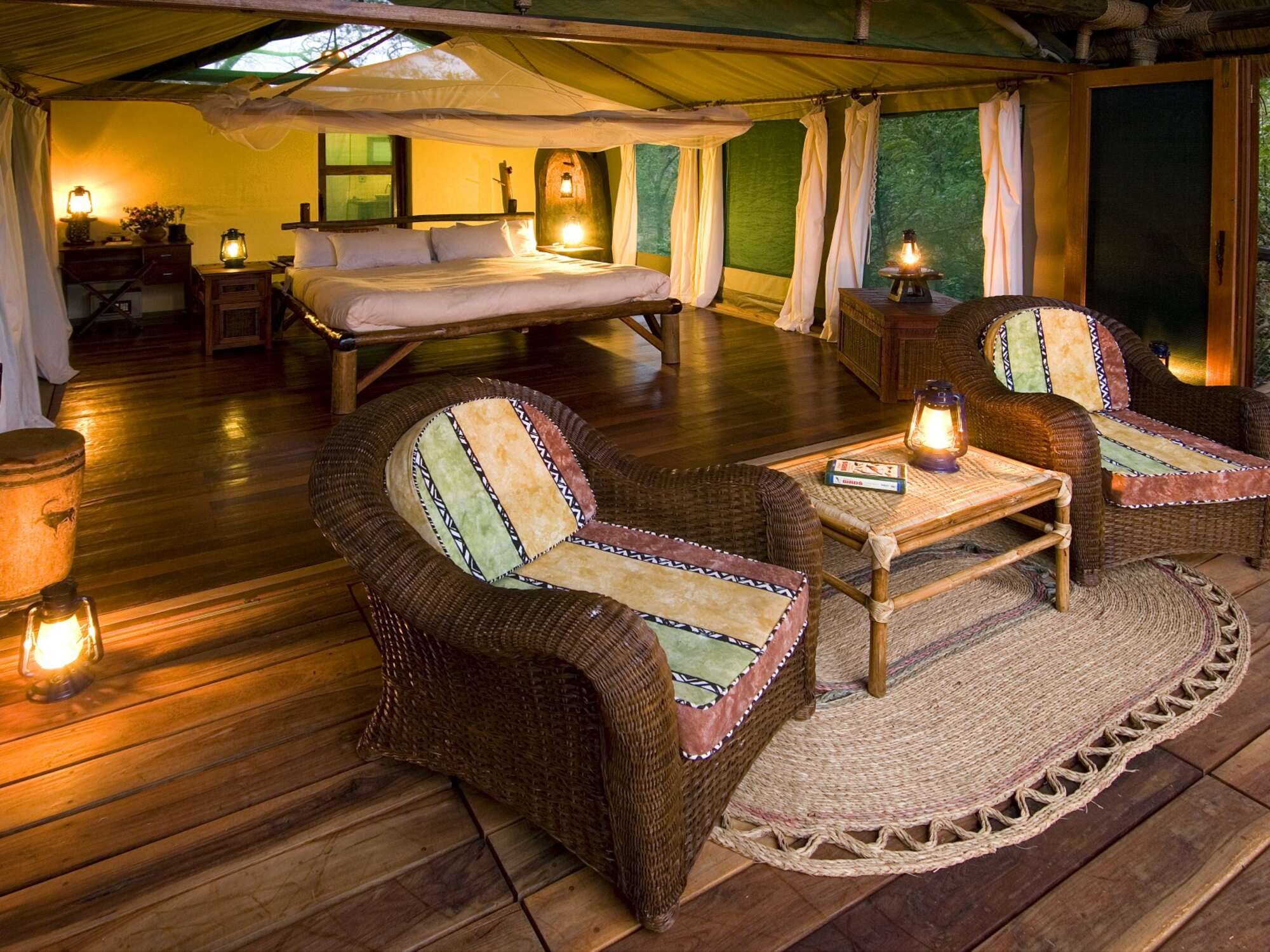 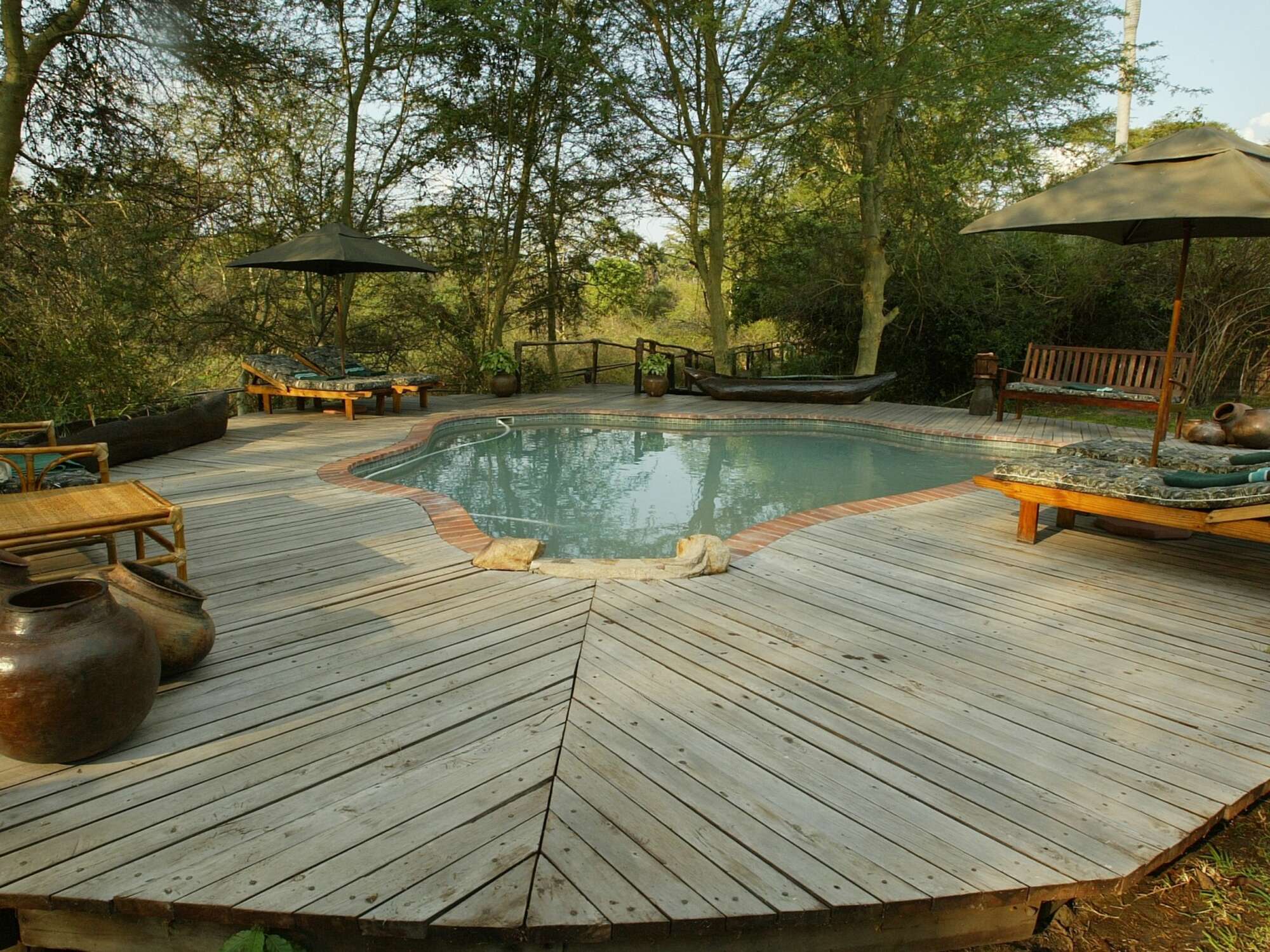 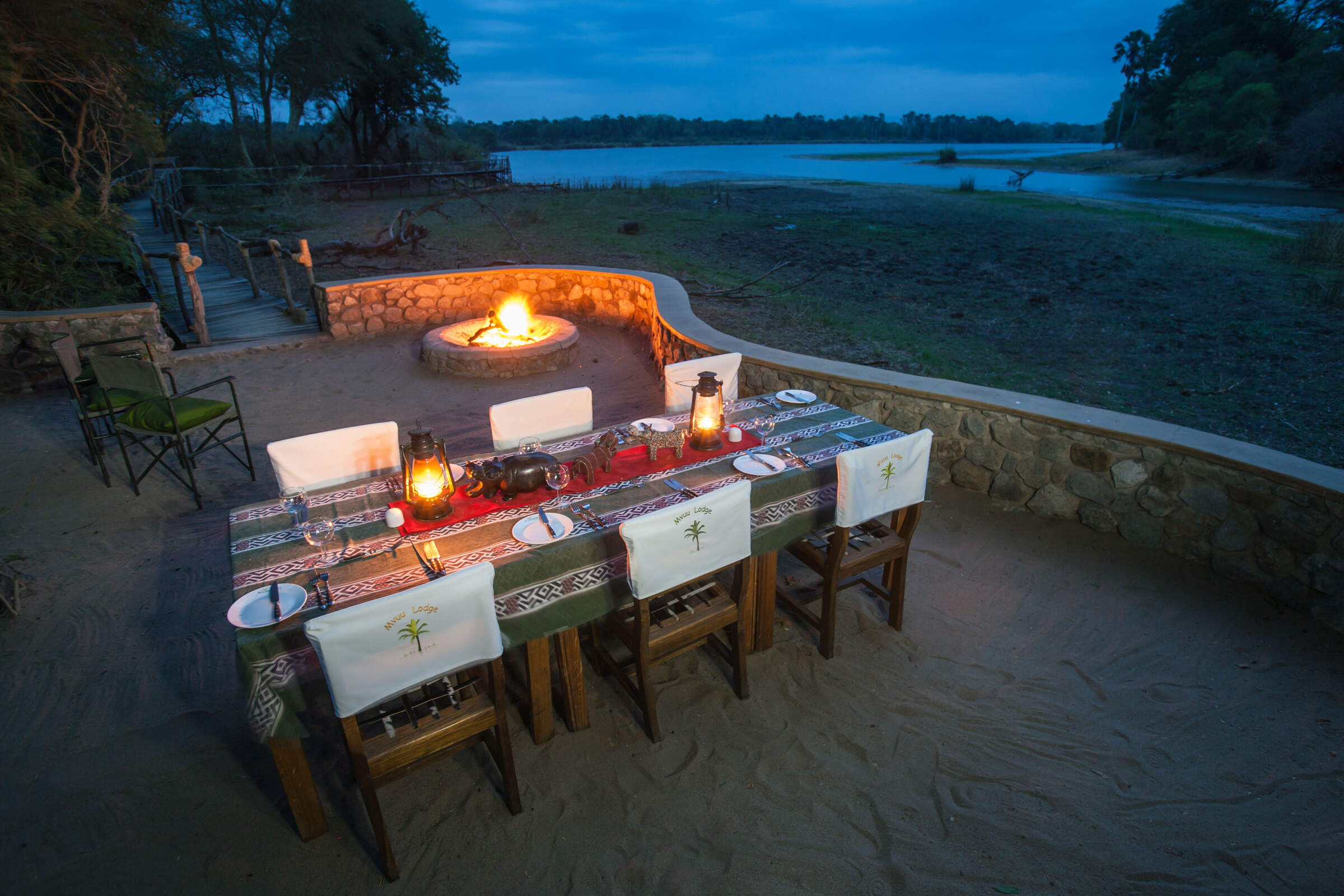 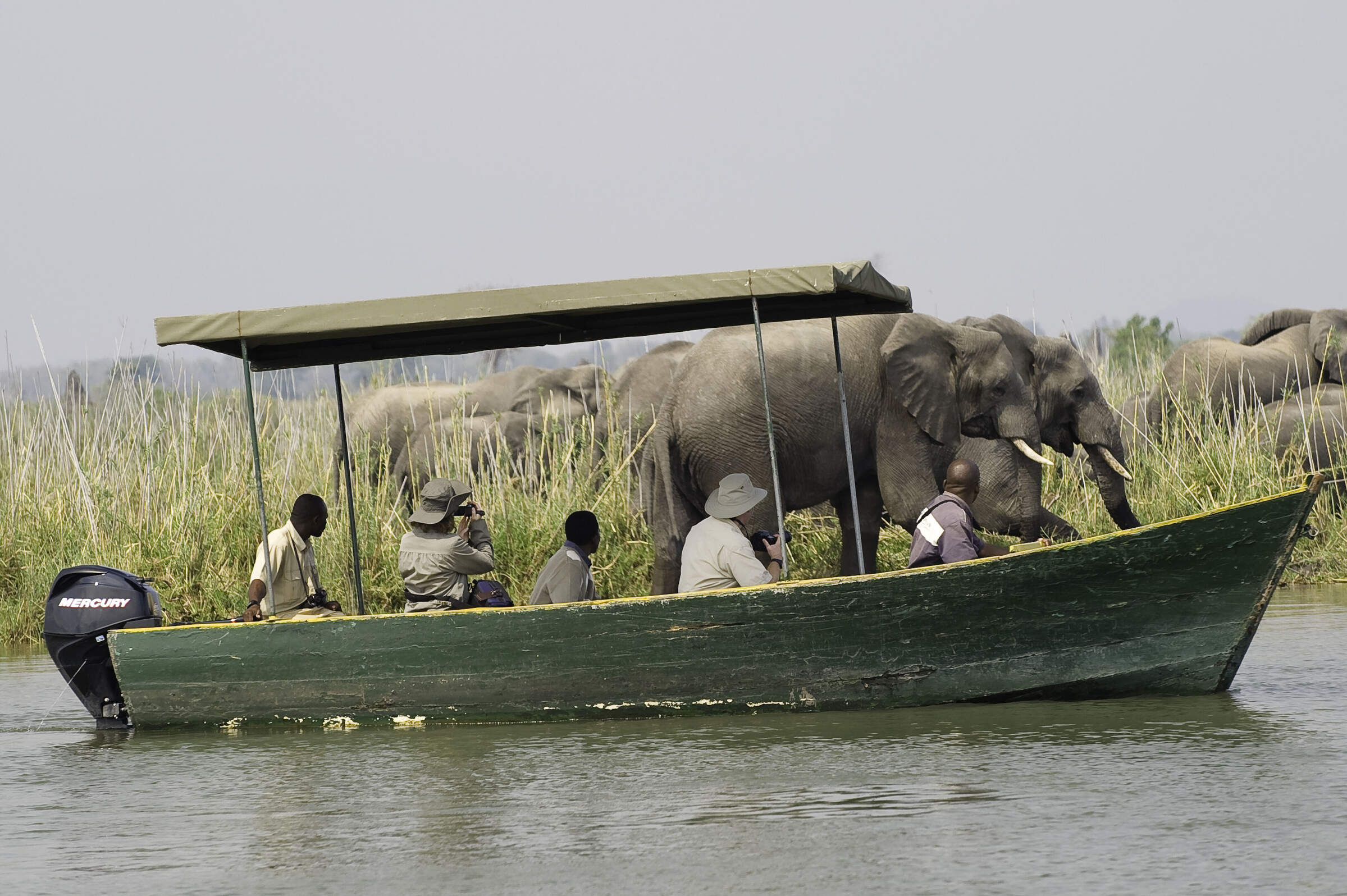 8 independent comments and wildlife information from our travellers who have visited Mvuu Lodge and kindly agreed to share their thoughts. They do not necessarily represent the views of Expert Africa

3 nights Arrived 29 Jun 2019
"The setting of Mvuu Lodge on the river in the Liwonde National Park is magnificent. Wildlife seen from the lounge included hippo,
crocodile, baboons and monkeys, mongeese, impala, waterbuck and bushbuck. Also plentiful and colourful bird life. The option of viewing wildlife on boat safaris is a big bonus.
Rooms were beautiful and comfortable, food delicious and all staff incredibly helpful and attentive.
Special mention to our very knowledgable guide Chifondo for making our wildlife viewings on water, in the truck and on foot such a rewarding experience.
All in all highly recommended." See all these reviews: 8n in Malawi
Experience Report
Overall Rating:
Excellent
Location:
Excellent
Service:
Excellent
Activities:
Excellent
Rooms:
Excellent
Food:
Good
Facilities:
Excellent
Sightings Report

3 nights Arrived 12 Sep 2017
"Malawi is very different to the South Luangwa , and Liwonde is a relatively small national park, without the main predators ( for now ) but with an excellent population of elephants , antelope and birdlife.

Most of the Safaris I went on were river based , which was a good way to see much of the park, particularly a very large mixed herd of elephants of both sexes and all ages as they came down to drink and bathe. We saw several kingfisher species and also several of heron including the Goliath Heron. There were multitudes of other waterbirds , as well as several crocodiles ( some quite large ) and hippos. There were also many Fish eagles , in fact we saw 4 very close together.

I only went on one game drive which was rather limited, and not helped by a puncture. I thought the vehicle could do with updating being an elderly and noisy land rover. We had views of Buffalo and Sable antelope amongst others , but the thick, dry bush prevented really good sightings.

The lodge is luxurious , with very well appointed cabins with very comfortable beds and an enormous bathroom with outdoor shower and a nice deep bath. There is also a nice, though surprisingly chilly( In such hot weather ) swimming pool nearby.

Food was really good and tasty and the staff very attentive. The manager D K was friendly , softly spoken and professional. My guide was Justin who is very experienced and knowledgable.

One of Malawi's problems is its rapidly increasing population and this was brought home to me on the lengthy drive from Lilongwe to Mvuu. The last section leading up to the park leads through a densely populated area which almost completely surrounds the park. It is important that these people are involved with the park, and many of the people who work in the park are from the villages and towns which surround it." See all these reviews: 7n in Zambia; 6n in Malawi
Experience Report
Overall Rating:
Excellent
Location:
Excellent
Service:
Excellent
Activities:
Good
Rooms:
Excellent
Food:
Excellent
Facilities:
Excellent
Mr R
Torquay

4 nights Arrived 27 Sep 2016
"This river lodge delivers "all what it says on the can" in luxury and service. We were even given a surprise dinned on the balcony of our chalet by the staff to celebrate that we were in our 40th year of marriage.

While the Shire river was so low that the waters no longer came up to the camp we had great views of the river from the camp. The wild life was varied and excellent even for non birders.

A visit to the sanctuary was well worthwhile to see the elephants and other four footed game at the water hole which is kept active from pumped water during the dry season." See all these reviews: 13n in Malawi
Experience Report
Overall Rating:
Excellent
Location:
Excellent
Service:
Excellent
Activities:
Excellent
Rooms:
Excellent
Food:
Good
Facilities:
Excellent
E & D
New Mexico

3 nights Arrived 14 Jul 2012
"What a great place. We stayed in room #8, its deck overlooking the lagoon, with the sounds, smells and the drama of every animal trying to stay alive. Can't say enough about the guides and staff, and the food was wonderful.

We had a chance to visit the re-forestation project that the school is doing and must take my hat off to all those involved." See all these reviews: 11n in Zimbabwe; 6n in Malawi; 1n in Zambia
Experience Report
Overall Rating:
Excellent
Location:
Excellent
Service:
Excellent
Activities:
Excellent
Rooms:
Excellent
Food:
Excellent
Facilities:
Excellent
Mr & Mrs D
Kilburn

3 nights Arrived 5 Oct 2009
"Perfect- a really special place. Loved watching all the wildlife from the terrace of the lodge.

2 nights Arrived 22 Sep 2007
"Next we went to Mvvu Camp [Ed: this was actually Mvuu Lodge – not Mvuu Camp!] which was the most amazing stay we had ever had. Our ‘chalet’ was extremely comfortable and all the staff, as in our previous stops were very friendly and welcoming.

The drives and boat safaris we had were fantastic and the many species of animals we saw were magnificent, from elephants and hippos to crocodile and impalas, not to mention the variety of bird life along the Shire River.

Kevin and myself were disappointed that we could not see the part where the black rhino and zebra roamed as they were carrying out an animal count which, unfortunately, took pace during our stay. All the more reason to return!

Coming face to face with a bull elephant one evening on our way to dinner was an unforgettable sight and quite a rare occurrence, we’re told, but it added to our ever increasing love for the place. Waking up to find warthogs grazing on your front lawn and monkeys sprawled out on your veranda is a sight we shall always cherish." See all these reviews: 8n in Malawi
Experience Report
Overall Rating:
Excellent
Location:
Excellent
Service:
Excellent
Activities:
Excellent
Rooms:
Excellent
Food:
Excellent
Facilities:
Excellent
Dr M
Twickenham

2 nights Arrived 18 Sep 2007
"Wonderful accomodation in sophisticated tents right in the heart of the park. Couteous and delightful staff in eco-friendly lodge. Knowledgeable guides and warm hospitality. We really did not want to leave.

A nice touch was having our laundry done as part of the package. We would go back there in a heartbeat. The animals, including elephants, were very close and great attention was paid to safety and respecting that this was their home." See all these reviews: 4n in Malawi
Experience Report
Overall Rating:
Excellent
Location:
Excellent
Service:
Excellent
Activities:
Excellent
Rooms:
Excellent
Food:
Excellent
Facilities:
Excellent
Showing 1-8 of 8
100%
8 reviews of Mvuu Lodge by travellers since August 2007
Overall rating by our travellers
8
0
0
0
0
Filter by month

From birdwatching breaks to walking holidays, find great ideas for your trip in Malawi.

Mvuu Camp is a comfortable family-friendly camp on the banks of the Shire River. If offers boat, walking and driving safaris.