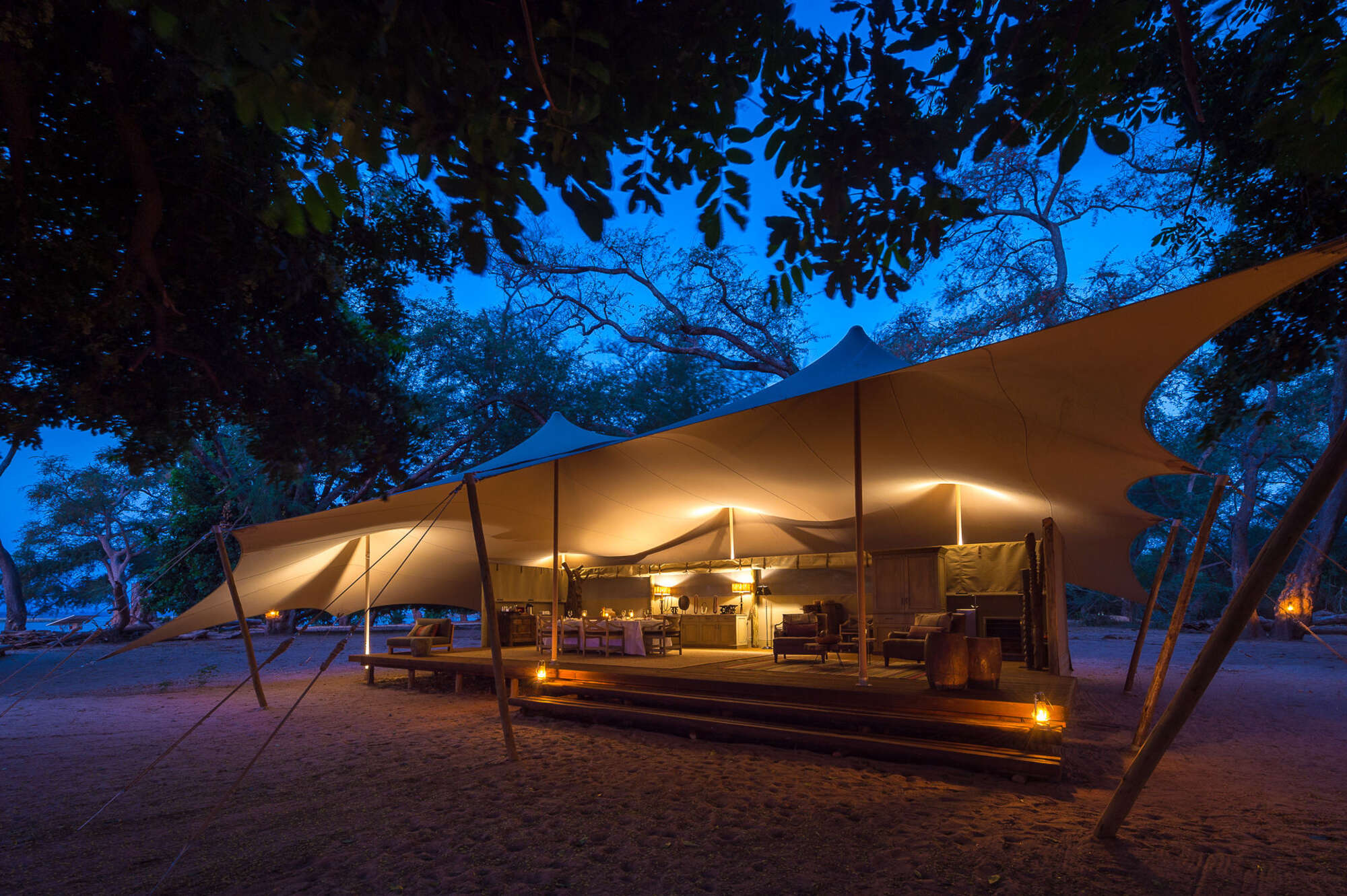 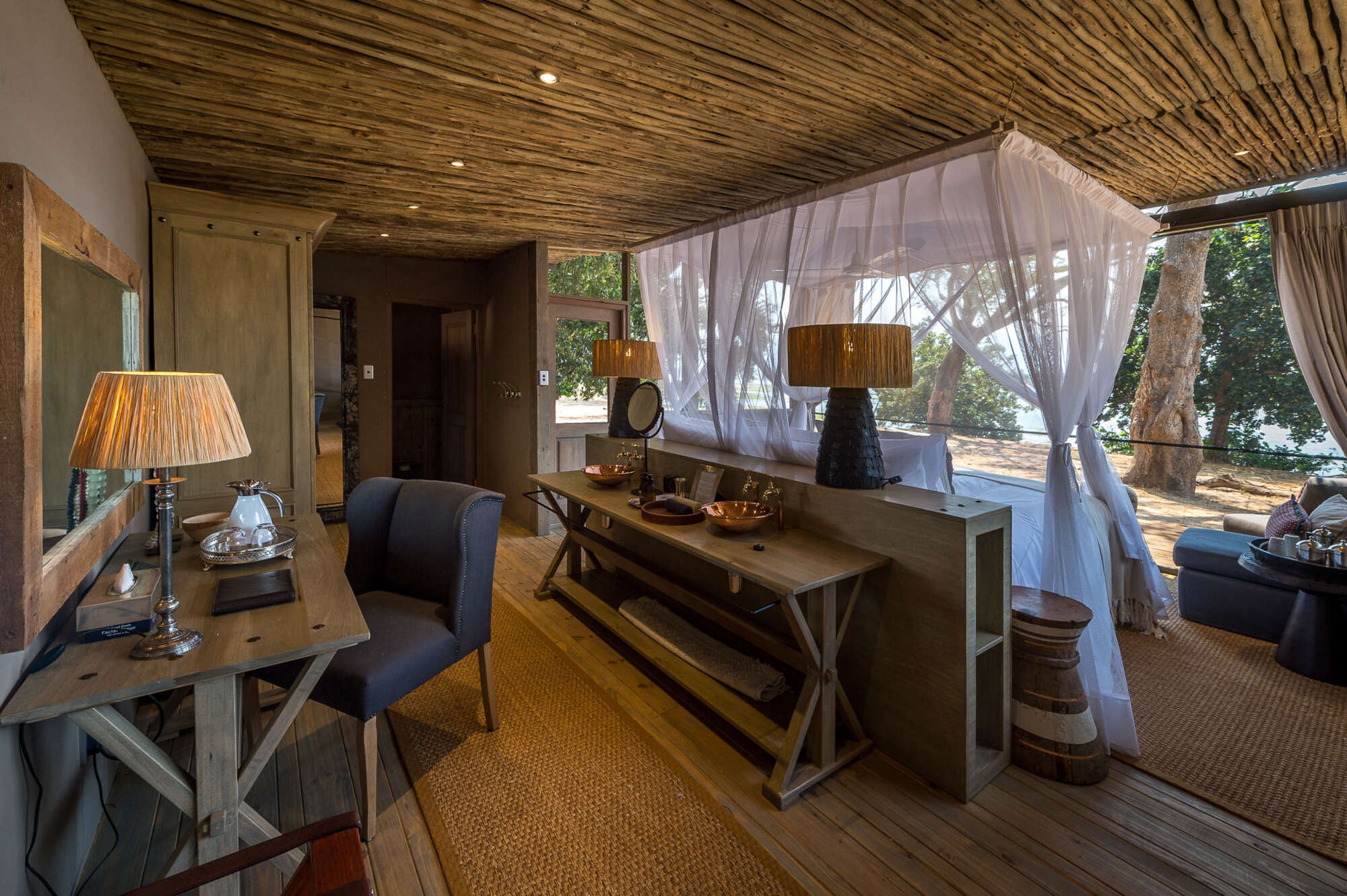 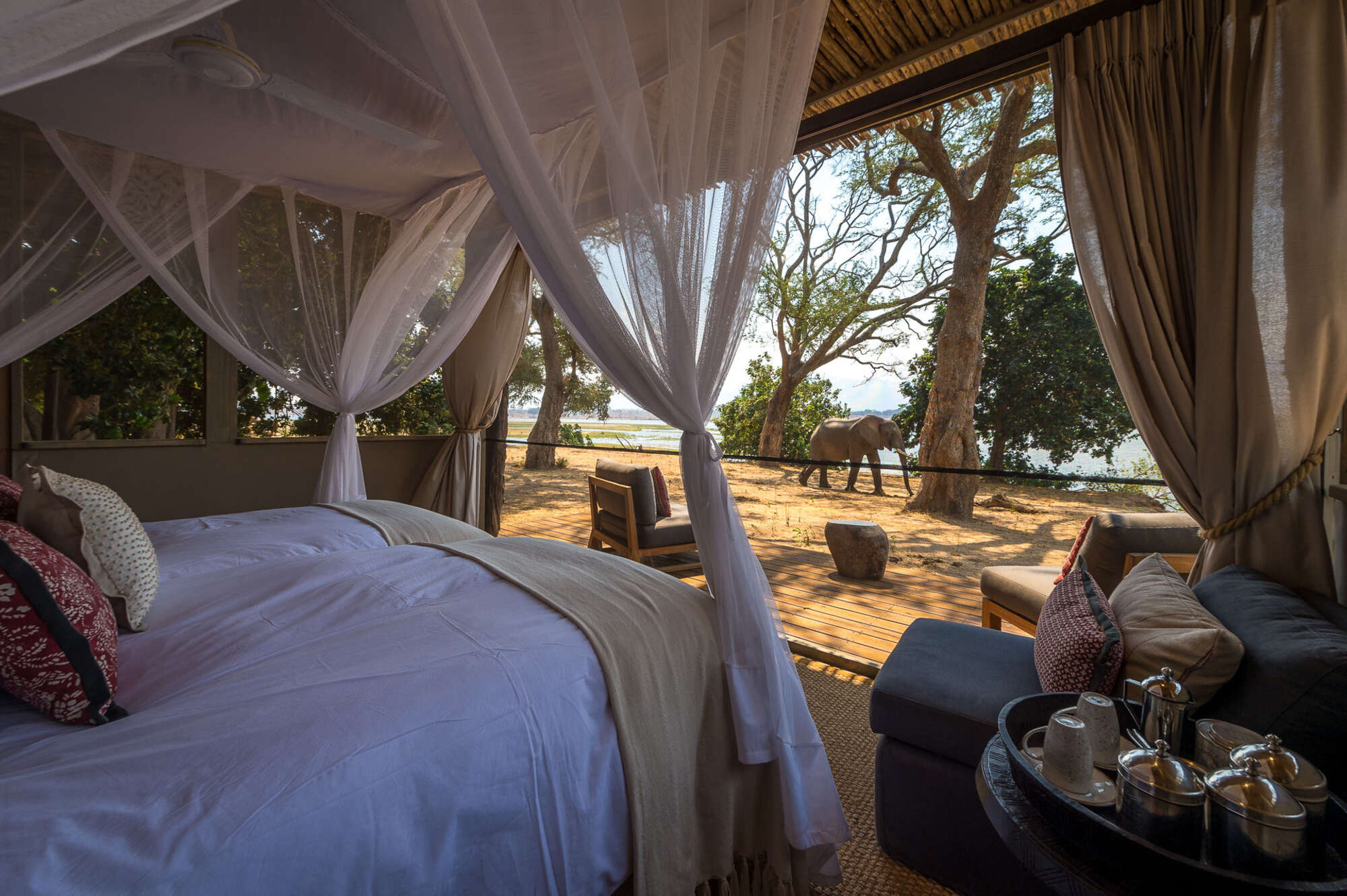 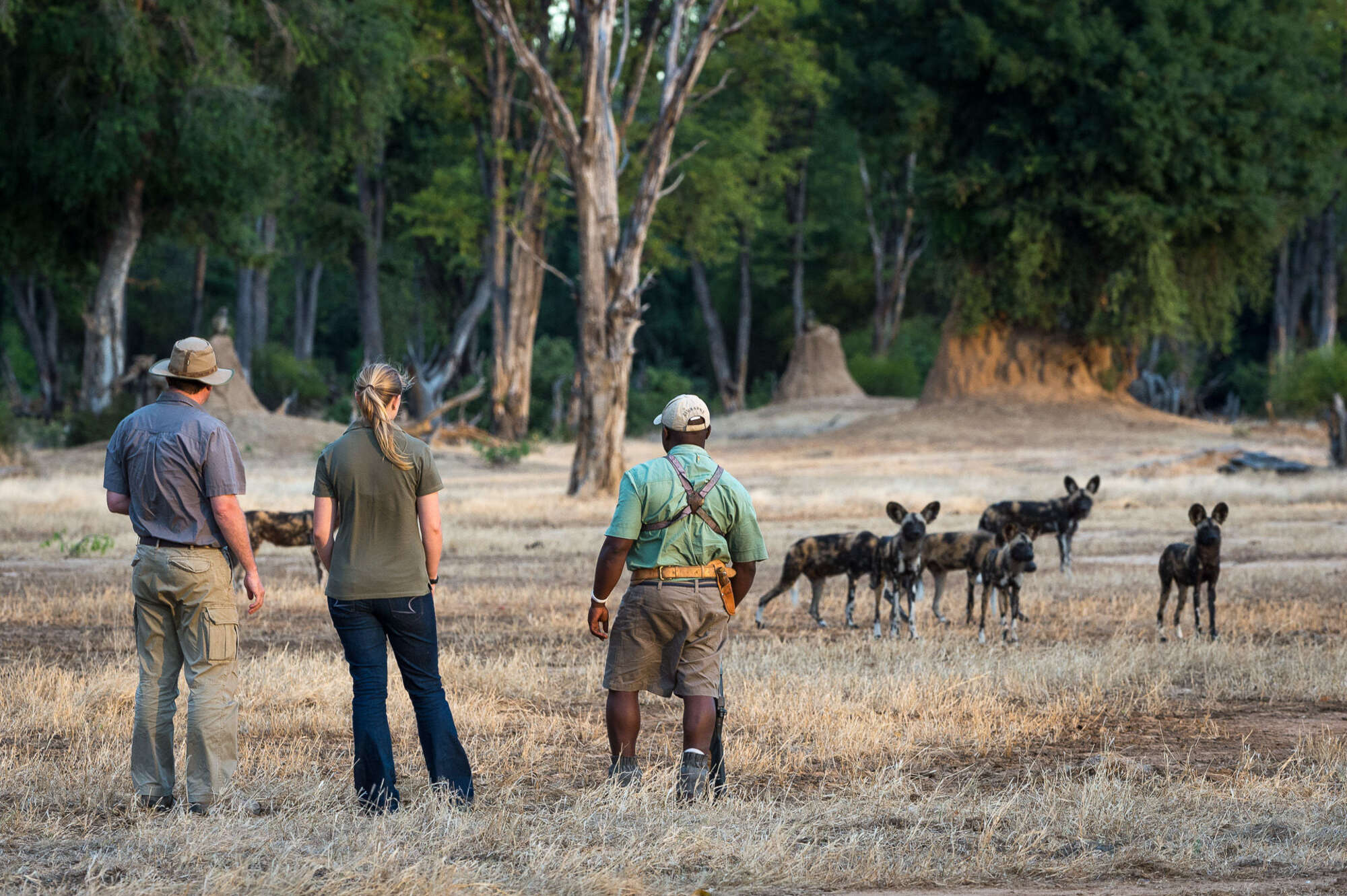 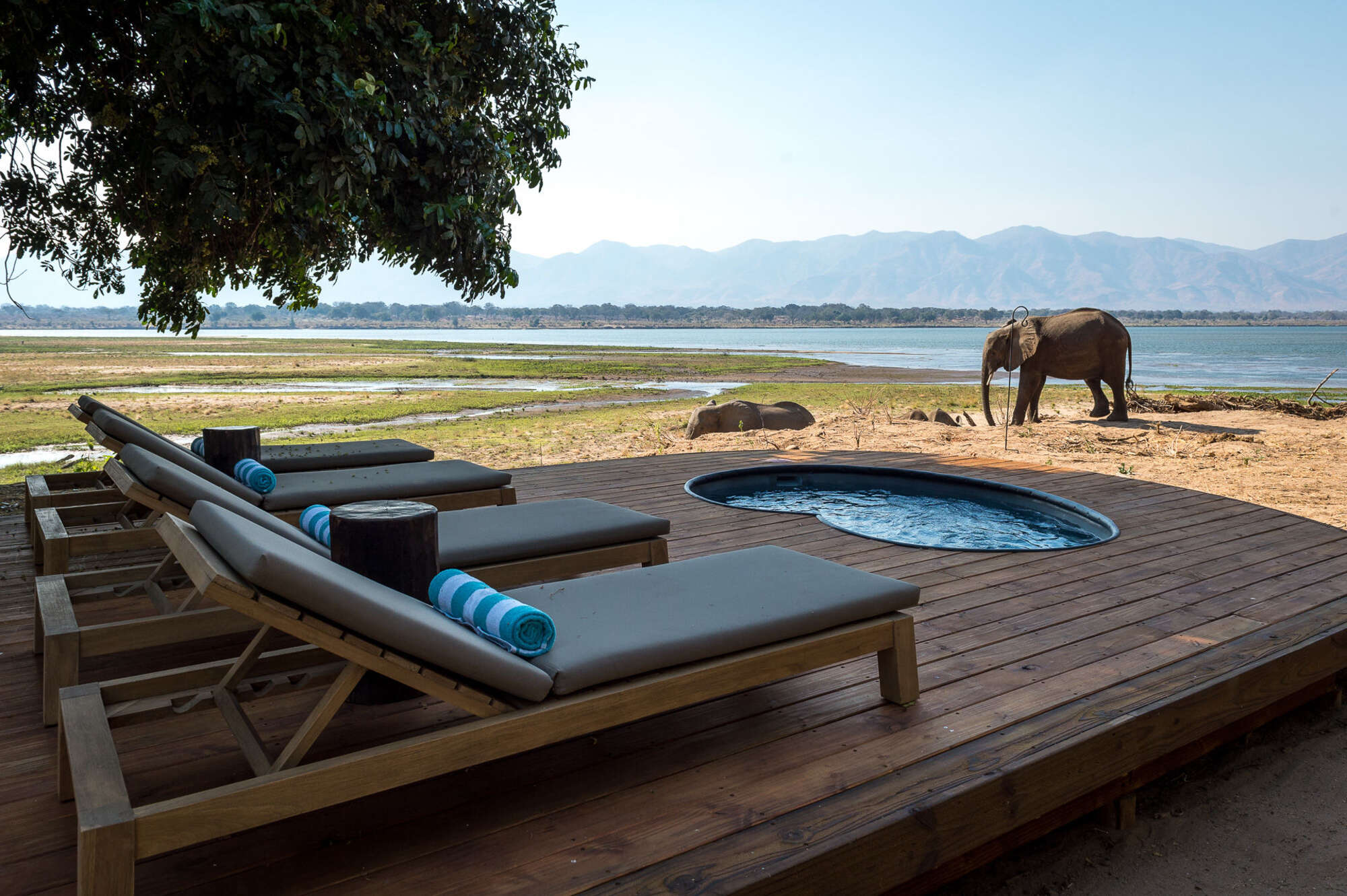 Opened in July 2016, Little Ruckomechi is situated in a private concession connected to the western boundary ...

... of Mana Pools National Park. In a shaded location on the banks of the Zambezi River, it is a small camp that aims to offer luxury accommodation in a scenic location with high concentrations of game.

Little Ruckomechi is owned and operated by the well-established Wilderness Safaris, who also own the larger Ruckomechi Camp a few kilometres upriver. Both camps sit within a 40km2 private concession bordering the western boundary of Mana Pools National Park, set against a scenic backdrop of the Zambezi River and the mountains of the rift valley escarpment beyond. The environments within the concession change from mopane woodland, scrubland dominated by Jesse bush, and open grassland areas (typically flooded during times of high water), which provides habitat for high concentrations of game.

Only vehicles from Little Ruckomechi and Ruckomechi are allowed within this concession, and while you may occasionally see a vehicle from the other camp, the game viewing is generally very exclusive. The concession also allows for more flexibility in activities than would be possible inside the national park. However, it’s important to note that the normal activities from camp do not go into the main central area of the national park, which is famous for its wildlife, scenic forests, and the four long pools from which the park gets its name.

Little Ruckomechi itself is set on the banks of the Zambezi, offering views of the river from wherever you are in camp. The area is shaded by a grove of mature albida trees, the pods of which attract large number of elephants into camp. On our last visit in October 2016 a small herd of elephants joined us for afternoon tea, wandering to within approximately 15m of where we were sitting.

Little Ruckomechi has four large tented chalets, although a maximum of three are occupied unless the camp is fully booked by a private group. These chalets are raised a foot or so above the ground on wooden platforms, and are decorated with modern safari chic; with canvas walls, plenty of natural wood, and a large gauze window along the front of the tents, they have an airy, elegant style. Each open-plan room is furnished with a king-size or twin beds beneath an electric ceiling fan, a large wooden wardrobe, writing desk, and a wooden counter with two copper washbasins. There is also a ‘wet-room’ style shower, which will work well for romantic couples, but may be more awkward for platonic friends sharing a room. The toilet is in a small separate room at the back of the room.

A sandy path that runs behind the tents connects them with the main area: two wooden decks beneath stretched canvas roofs, their sidescompletely open to the river. The first functions as the dining room, with a long wooden table and a well-stocked bar; the other as a lounge, with cushioned sofas and armchairs in neutral colours, and a bookshelf with plentiful reference and guidebooks.

In front of these decks is a sandy area where directors’ chairs surround a firepit, and a smaller deck with a reasonably sized plunge pool and several sunloungers. The overall feel is of an old-world, colonial explorers’ camp, but with a good amount of modern luxuries and comforts.

Activities at Litte Ruckomechi focus on game drives and walking safaris within the camp’s private concession. On our last visit in October 2016, when we enjoyed a game drive in the afternoon, we hadn’t driven more than five minutes from camp before we found a huge herd of buffalo in a dry section of the riverbed, mixed with a number of impala, zebra and warthogs. Later we were able to find a pride of lions with their young cubs, and after sundowners (while watching elephants drink from the river) we were lucky enough to spot leopard and honey badger while on a night drive.

Motorboats are not allowed on the river inside the national park, but they are permitted within the Ruckomechi concession. This means that river-based game viewing activities, sundowner cruises, and catch-and-release fishing are all possible from motorboats at Little Ruckomechi. Canoeing with a qualified guide is also possible, although this needs to be organised through its sister camp, Ruckomechi. If you hope to make canoeing one of your main activities while you are here, we would suggest staying at this larger property upstream.

Little Ruckomechi is an excellent addition to this area of the Zambezi valley. It has a luxurious style that affords great levels of comfort, top service, and some spectacular game viewing, both while out on activities and from the camp itself. With its smaller size it provides a more personal and more exclusive experience than its sister camp a short way upstream.

Location
Mana Pools National Park, Zimbabwe
Ideal length of stay
2–4 nights would be ideal at Little Ruckomechi; there's a lot to see. It combines well with canoe safari along the Zambezi and could also be combined with one of the camps further east, which will operate their activities inside the national park.
Directions
Little Ruckomechi can be reached by light aircraft from Harare or by road/boat transfer from Lusaka or Victoria Falls (approximately a 5 hour transfer)

The nearest airstrip is Mana West, which is 20 minutes' drive from Little Ruckomechi.
Accessible by
Fly-and-Transfer

Usual board basis
Full Board & Activities
Food quality
On our last visit to Little Ruckomechi in October 2016 the food was of an excellent quality, and we very much enjoyed all our meals. Most dietary requirements can easily be catered for with sufficient notice.

A light breakfast of cereals and fruits is usually served 5.30–6.00am, before your morning activity. On our last visit, freshly cooked American-style pancakes were also made for us.

Upon return from your activity in the late morning, brunch is served. Ours combined bacon, sausage and eggs cooked to order with a buffet of barbecued chicken, vegetable fritters and green salad.

Afternoon tea is served before your second activity (usually at 4.00pm), and includes savoury and sweet snacks (chicken satay skewers and chocolate cake on our visit) served alongside jugs of iced tea and iced coffee, as well as their hot counterparts.

Three courses are served for dinner. We had a Thai beef salad as a starter, and – as we visited on a Sunday – a main course of roast lamb, roast potatoes and butternut squash, and roast vegetables. Dessert was an apple tarte tartin, finished off with coffee and aperitifs around the fire.

Luxury
Little Ruckomechi offers a luxury safari with an old-world, colonial character. Making the most of its stunning riverside location, this camp benefits from spectacular game viewing and a real feeling of exclusivity. Relax in the plunge pool and admire the views of the Zambezi.
See ideas for Luxury

Attitude towards children
Little Ruckomechi doesn’t accept children under 6 years old, unless the entire camp is booked exclusively.
Property’s age restrictions
No children under the age of 6 years
Special activities & services
None
Equipment
None
Generally recommended for children
Expert Africa doesn’t recommend Little Ruckomechi Camp for children under the age of about 16; there is very little to entertain youngsters in between guided safari activities, and it's a camp with an adult atmosphere.
Notes
This is a very open safari camp and dangerous game is likely to pass through. Children must be under a parent’s supervision at all times.

Power supply notes
The camp runs on solar power, although there is also a back-up generator in case of cloudy days.

There is 24-hour electricity in all the chalets, and multiple plug sockets (for UK-style plugs with three square pins) available for charging batteries. Hairdryers cannot be used in the rooms.
Communications
There is sporadic cellphone reception at Little Ruckomechi, but no WiFi or internet access.
TV & radio
None
Water supply
Other
Water supply notes
Water is pumped from the Zambezi River and filtered multiple times.

Fighting together to provide children in rural communities with life skills that would increase their self-esteem as well as their understanding of the natural heritage, the ultimate goal of this partnership is to inspire pupils to care about the natural diversity of the Mana Pools National Park. Apart from financial support, one way the lodge contributes to the initiative is by providing accommodation for a three-night annual camp where children learn in a fun, interactive and engaging way, and therefore realize their potential and demonstrate the opportunities that education creates for them. Furthermore, children who stand up during the camp as having a particular interest in conservation or prove a remarkable leadership potential are selected to go on the Youth Environmental Stewardship camp. Here, they get to spend more time with mentors, and therefore receive career guidance or have a chance to be selected for the scholarship and internship programme.

So far 10,000 children from rural communities have been involved in programmes run by ‘Children in the Wilderness’. The lodge now relies on the help of tourists, who simply by staying at Little Ruckomechi will support the staff who delivers the education programmes, and therefore continue changing lives of many aspiring children in disadvantaged conditions.

Malarial protection recommended
Yes
Medical care
On our last visit to Little Ruckomechi the camp had an on-site nurse, and all senior staff and guides are trained in first-aid.

In a medical emergency, evacuation by air would be arranged to Harare or Johannesburg.
Dangerous animals
High Risk
Security measures
Guides will escort guests to and from their chalets at night.
Fire safety
There are fire extinguishers outside the entrance of each chalet.

Unspoiled and peaceful, Kanga Bush Camp is located in a remote and exclusive part of Mana Pools National Park, overlooking the Kanga Pan.

Stretch Ferreira Safaris Camp is a small, owner-run camp on the banks of the Zambezi River in Mana Pools National Park, with the emphasis on great guiding.

Zambezi Expeditions is a simple, semi-permanent camp along the Zambezi River that offers excellent guiding and standards of service.

The Canoe Trail is a multi-day trip, along the Zambezi with some of the best guides in Africa. Each night you'll camp on the banks of the river.

Closely associated with Vundu Camp, Little Vundu has the same great location and quality of guides, and is occasionally used for private group bookings.

Nyamatusi Mahogany is a family-friendly, yet remote and luxurious safari camp in Mana Pools National Park.

Kavinga is a comfortable tented camp tucked away in a less-visited area of Mana Pools National Park with surprisingly good wildlife and an excellent hide.

Sapi Springs Camp offer the chance to feel closer to the bush than almost any other camp in the Mana Pools Area.

One of the original properties in Mana Pools area we are excited to be featuring Chikwenya Camp again.