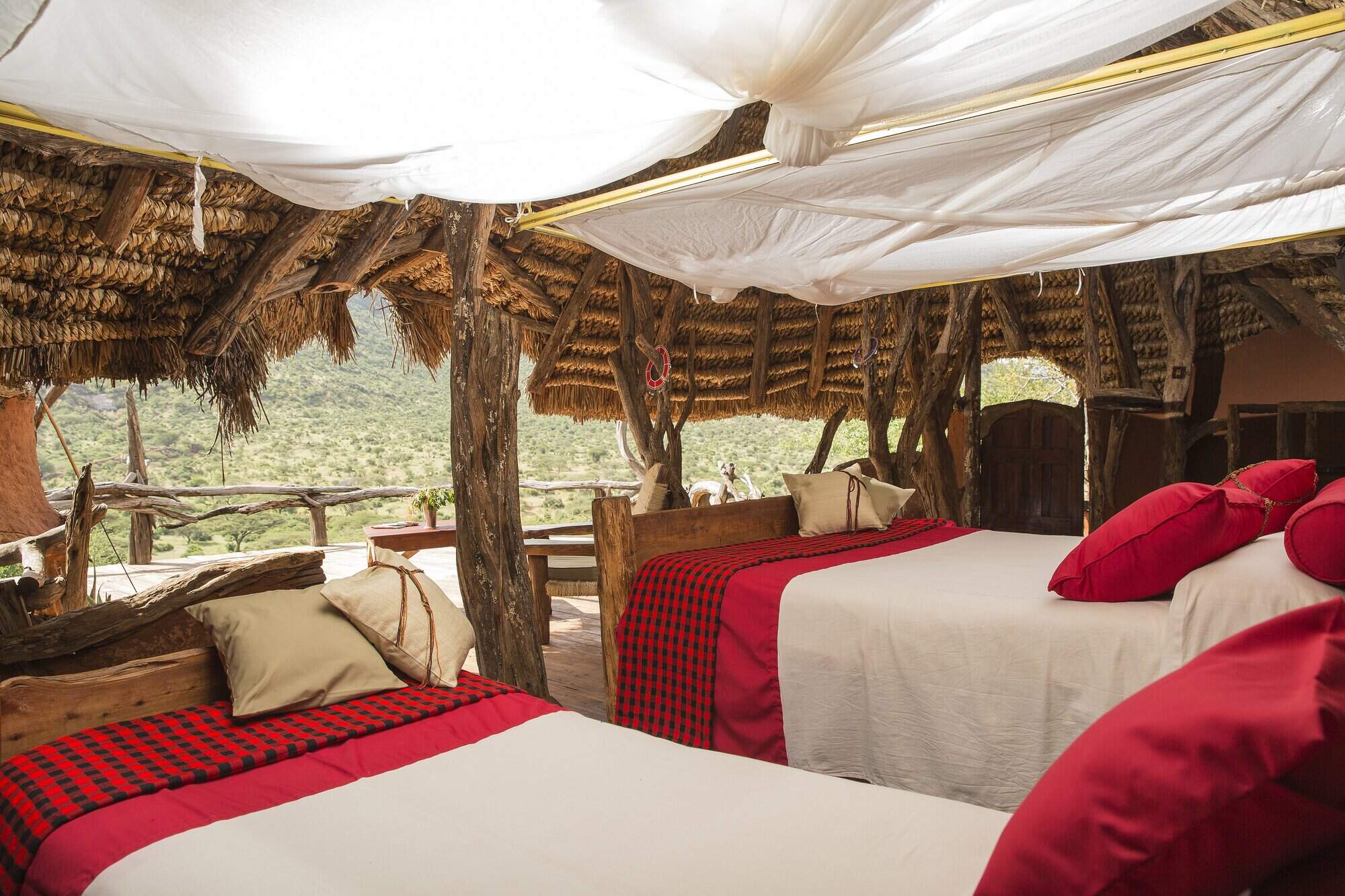 5 independent comments and wildlife information from our travellers who have visited Il Ngwesi Eco-Lodge and kindly agreed to share their thoughts. They do not necessarily represent the views of Expert Africa

It is a beautiful eco-lodge, but it is the people that make it so special. Jackie, Lawrence, Sam, James and so many others were just the best staff anywhere. Our rooms were wonderful, the food was fantastic. But our chats at dinner with Jackie and sitting in the main house talking with everyone was what we loved most. Our walk to the rhinos was great - it felt good to get out and walk for awhile after sitting for so long on game drives. Our beading class was fun and gave us so much appreciation for their works for art. Another family (another Expert Africa group) asked us to join them in a goat roast. What a magical evening - the goat was delicious and the traditional dancing and singing was so special. The visit to the local village was well-done.

Because they did not get April rains, they are experiencing a drought. The number of animals in the area reflects this, but we didn't mind at all. We were ready for some downtime by the pool and a less intense schedule. The staff convinced us that the green season is the time to visit and we can't wait to go back.

Note: it is a long drive from the Lewa airport. (We did learn quickly in our trip that one hour "African" time was usually double that.) It was about 3 from the airport on our arrival day and about 2 to return. There is a private airstrip and we might have considered that! It would have meant not seeing Lewa Conservancy and some of the villages along the way, so there is a trade-off for flying right in." See all these reviews: 11n in Kenya
Experience Report
Overall Rating:
Excellent
Location:
Excellent
Service:
Excellent
Activities:
Excellent
Rooms:
Excellent
Food:
Excellent
Facilities:
Excellent
Sightings Report

3 nights Arrived 19 Aug 2019
"Amazing to have such luxury in the middle of the bush.

The world's most scenic shower and loo location. Bed on the deck under the stars was wonderful. Bushwalks very interesting, rhino walk memorable. Sundowners and sunuppers in beautiful spots. James had lots of stories to share.

3 nights Arrived 23 Jan 2019
"I doubt you will ever have the experience of walking through the bush and coming upon two full-grown white rhinoceri except here. The rhinos have been hand-reared at Il Ngwesi and live inside a 300-hectare protected sanctuary but that doesn't mean they're not wild. We weren't sure of seeing them and when we did, we stood very still and quiet so as not to frighten them. That might seem silly given the size and strength of a rhinoceros but I am sure they were very concerned, and for good reason.

Visiting Il Ngwesi not only means you help the Maasai community owners of this lodge protect their rhinos, but also promote greater sustainability in the community, balancing the interests of the grazers with the wildlife. The lodge has helped to provide schools, health clinics, and water as result of eco-tourism. This is what is all about.

We had many wonderful walks in the bush with James Olekinyaga as our guide, and big hugs to Marcy and the other staff at the lodge for a very special send off with dances and singing. We loved our visit." See all these reviews: 18n in Kenya
Experience Report
Overall Rating:
Excellent
Location:
Excellent
Service:
Excellent
Activities:
Excellent
Rooms:
Good
Food:
Good
Facilities:
Excellent
Sightings Report

3 nights Arrived 1 Dec 2018
"The service and food was excellent. The room and views were incredible. Had a great experience with Edwin and Fred on the game drives.

It rained one full day we were there however we were able to see multiple herds of elephants cross multiple times a day right outside of our room. We went to the Rhino conservatory, had multiple game drives, a bush walk, and a visit to a nearby Masai village.

4 nights Arrived 28 Dec 2013
"Il Ngwesi was the initial spur for us to visit Laikipia, after a presentation on the community-based project as a whole in London last February, which impressed us. The lodge is run by and on behalf of the local Masai community, combining protecting wildlife with cattle and goat farming, training members of the community to equip them to work locally and more widely in the tourist/safari industry, and bringing money into the community as a whole to aid education and development. Having spent four nights there, we are in no doubt that this is a project well worthy of support and have no hesitation in strongly recommending it.

In writing the following detailed comments, we would note that in both relative and absolute terms the overnight rate at Il Ngwesi is very affordable and excellent value for money.

We actually stayed in two rooms - two nights in each - not because of any fault with our original accommodation but because, half-way through our stay, a room with a sleeping deck 'under the stars' became available and management offered to move us there, which we accepted. Both rooms were rustically pleasant and comfortable with good showers: sleeping under the stars was a real treat.

The staff at the camp were all extremely welcoming and hospitable and we were very well looked after. Particular commendation goes to James, who not only oversees the running of the camp but who is also an excellent guide and very good company (as well as being the presenter in London who first inspired us to want to visit).

In marking food as 'average' (see below), we would underline that we are taking a numerically literal interpretation of the word, especially relative to the other camps at which we stayed this trip. And we would stress that the meals were wholesome, tasty and plentiful. A little more imagination - and, perhaps, a little more leisurely pace between courses - could easily see this rating improve.

Our dominant activity was walking/birding. The walks were consistently enjoyable (including the climb to the top of the hill behind the camp) and the bird population in the area was huge - great time of year to visit with many resident birds nesting and migrants in the area. As for mammals, since this was the early part of the dry season, sightings were regular rather than abundant: but we still did well - especially for elephants. Our hopes for first ever sightings of vulterine guinea fowl and the remarkable gerenuk were realised (in both cases) within minutes of arriving.

Our afternoon at a local Masai village, followed by dinner, was fascinating. We were very well hosted by a young local, Peter, aspiring to go on to university shortly - and therefore himself a beneficiary of the project which has helped finance him through secondary education. We learnt a great deal not only about Masai history and traditions but also about the aspirations of the community, building on dialogue throughout our stay with the staff at the camp. There were also some very interesting comparisons to draw later between the way the Il Ngwesi project operates and the approach adopted by the other two community-based camps at which we stayed during this trip." See all these reviews: 13n in Kenya
Experience Report
Overall Rating:
Excellent
Location:
Excellent
Service:
Excellent
Activities:
Excellent
Rooms:
Excellent
Food:
Average
Facilities:
Excellent
Showing 1-5 of 5
100%
5 reviews of Il Ngwesi Eco-Lodge by travellers since August 2007
Overall rating by our travellers
5
0
0
0
0
Filter by month