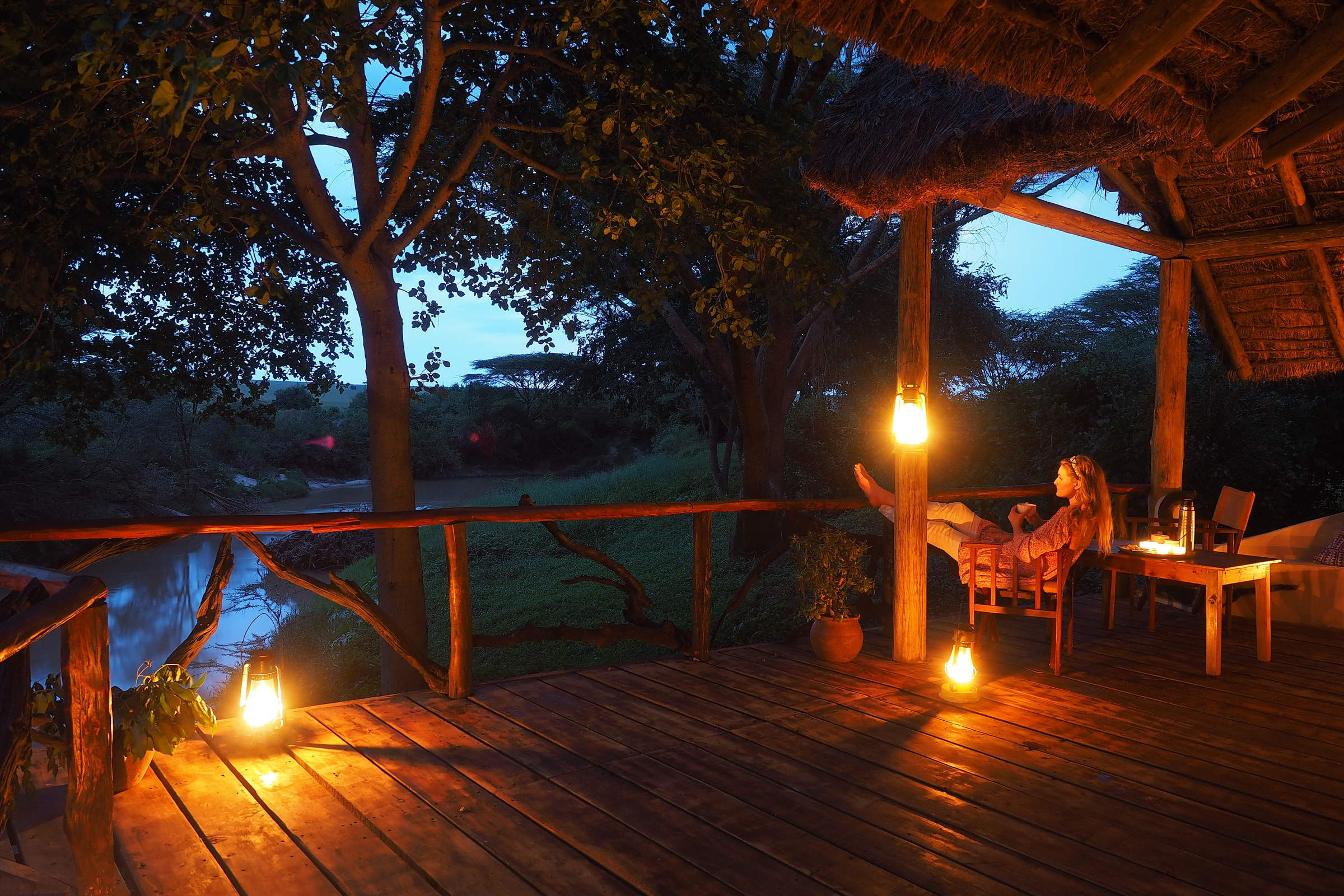 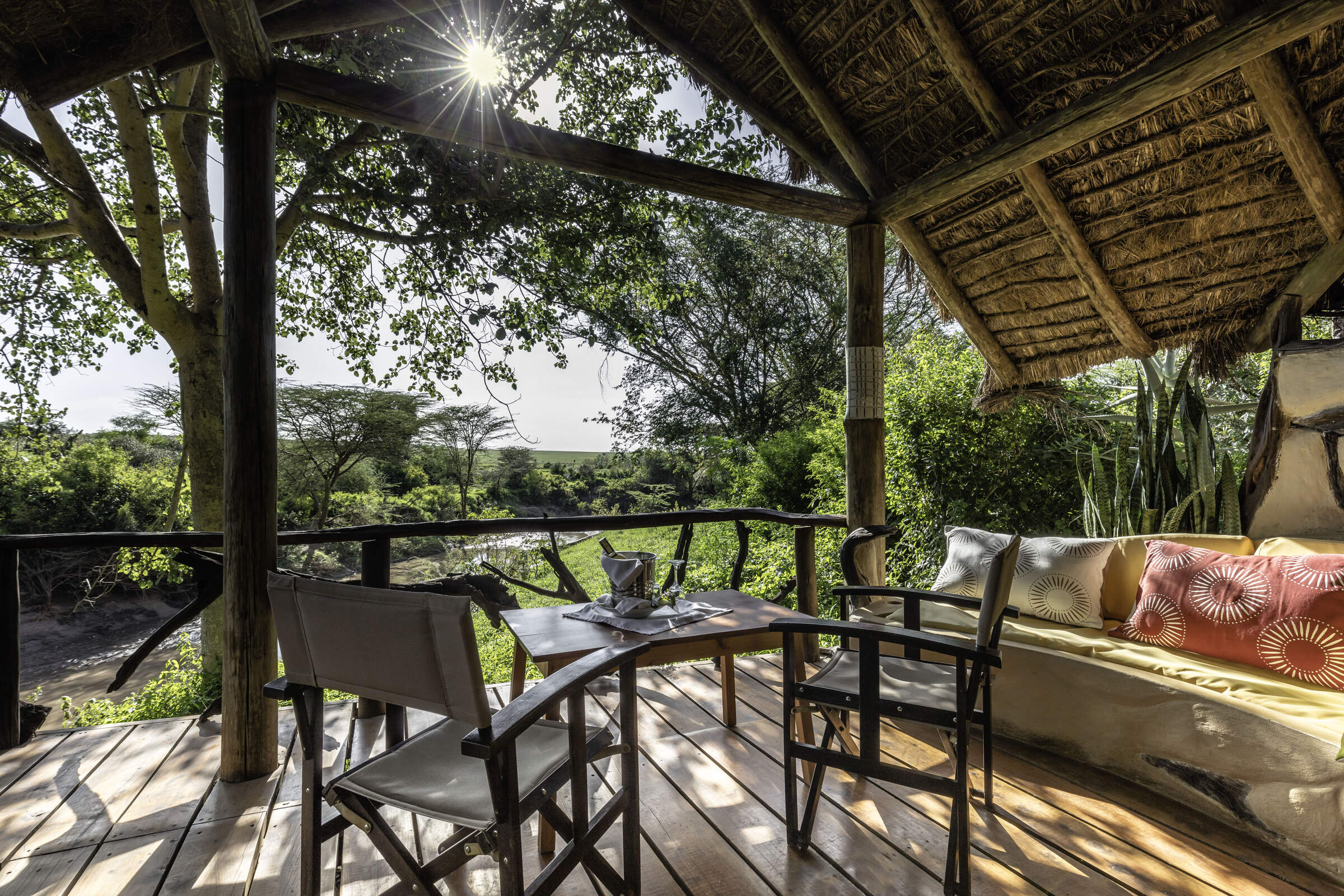 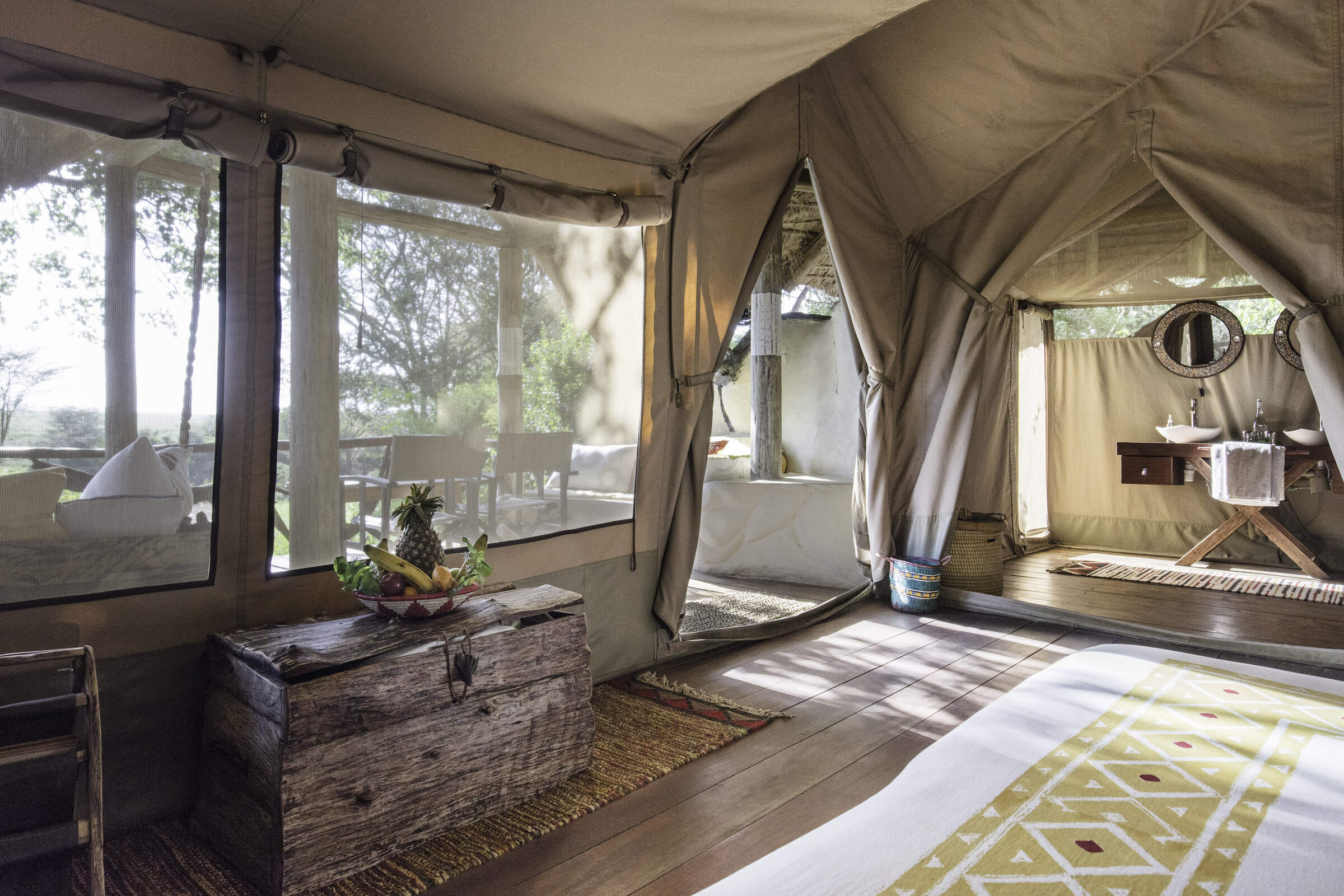 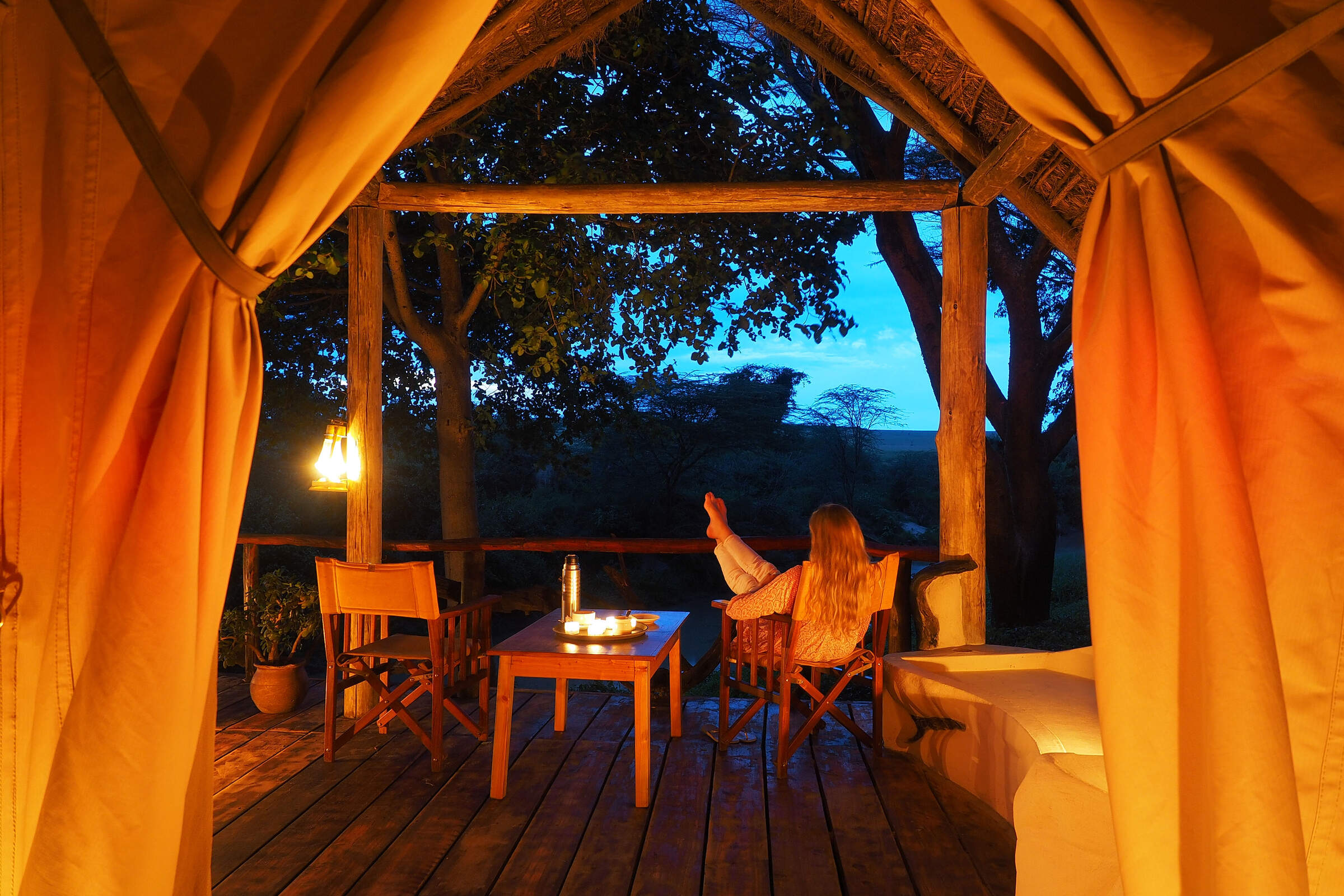 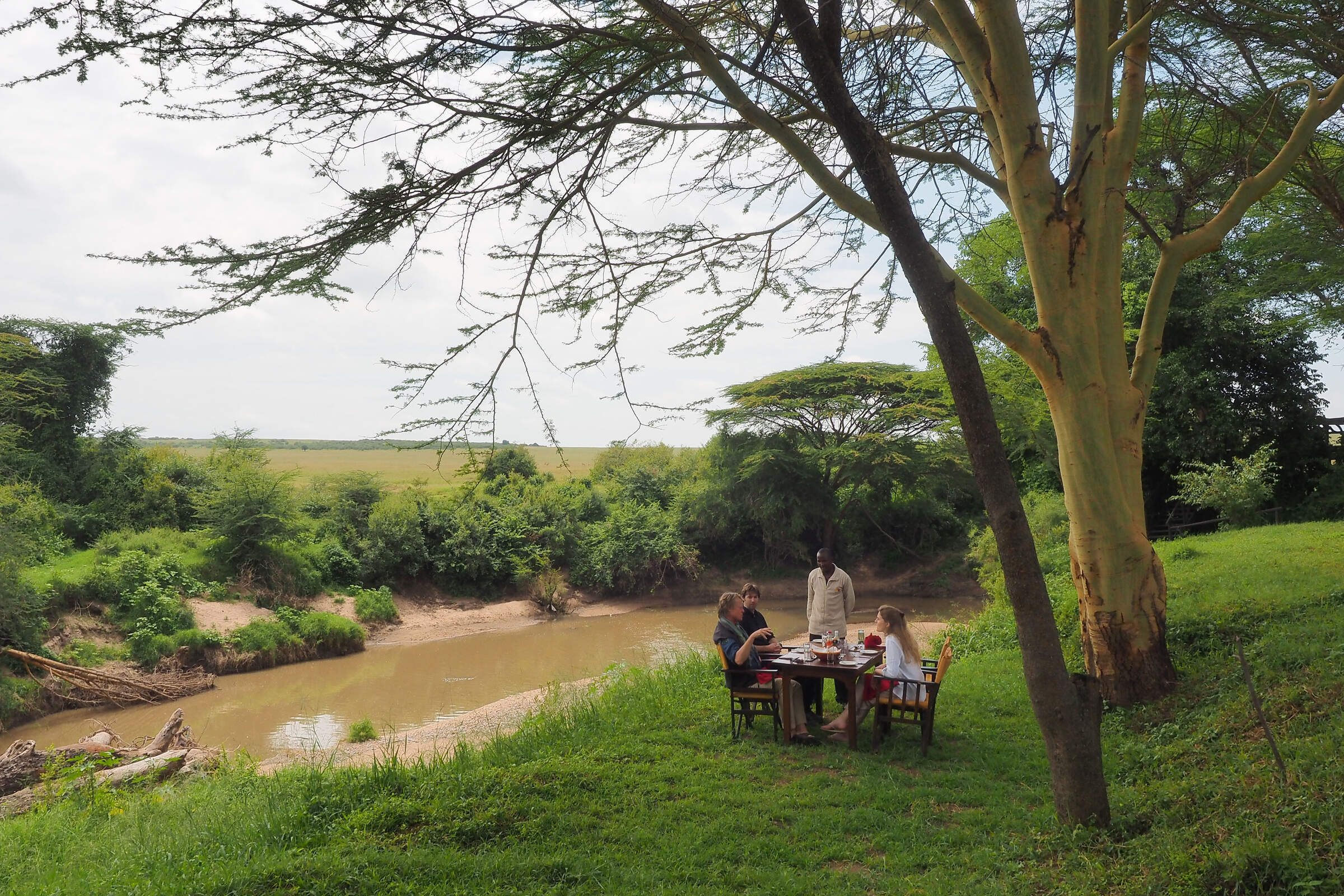 ... Group Ranch, just outside the Maasai Mara National Reserve. Close to Talek Gate and the small settlement of Talek, the camp is ranged in riverine forest along the north bank of the Talek River, which forms the reserve’s north-east boundary. The camp has direct access to the reserve via a private footbridge. Basecamp Maasai Mara achieved world fame in 2006 by hosting Barack Obama during his visit to Kenya two years before he became US president.

Although the immediate environs of the camp are badly over-grazed and its location, close to the settlement of Talek, is none too appealing, once you’re through the camp gates, and particularly after you’ve gone through reception which physically separates the parking area from the main area of the camp – you enter a different environment altogether. Based around the ‘positive footprint’ concept, Basecamp Maasai Mara aims to put into its environment more than it takes out and they have planted more than 20,000 trees just outside the gates in recent years. Guests are welcome to visit the plantation.

The double-storey lounge and dining area is floored with crazy paving and is sheltered by high roofs made of tiles of local Kilgoris grass. Dining chairs are all the directors’ variety, which you may want to eschew as soon as your meal is over for a comfier seat – on one of the cushioned bunks downstairs or the simple sofas on the balcony. As well as the dining area and lounge, the Migration Bar offers a sit-up bar and bar stools.

Activities from Basecamp Maasai Mara major on game drives in the Sekenani sector of the Maasai Mara National Reserve. The camp uses closed vehicles with pop-top roofs. When the water in the Talek River is low, which it is most of the year, the footbridge from the camp into the reserve can be used, avoiding a 15-minute drive through the settlement of Talek at the start and finish of each game drive. Instead, guests walk with a guide to a vehicle pick-up point inside the reserve on the other side of the river, returning to the same point at the end of the game drive.

For those interested in local culture, school visits are on the agenda, and can be very worthwhile. The two-hour walks to the Talek community area include guidance on the local economy. Typically you either leave at 6.30am and come back for breakfast, or take breakfast with you and get back about 11.00am. A group of Maasai women in the camp make craft souvenirs under the ‘Basecamp Mara’ brand.

Basecamp Maasai Mara’s environmental credentials are impeccable: it is one of only three properties in the Maasai Mara and six in the whole of Kenya to have earned an Eco-Tourism Kenya gold award. Water comes from a 60,000-litre rainwater tank supplemented by a tanked-in supply (they are also studying a borehole proposal). They have a system that separates fat from water and they reuse all kitchen and tent grey water in their vegetable gardens. Toiletries are eco-friendly and the toilets are composting, dry toilets. Most of the camp’s power is supplied by three, 4m² solar panel units, each unit serving four tents. Very little concrete has been used in camp – and much of the building material consists of mud and sustainably sourced dead wood. If you’re interested, you can do a comprehensive tour of the camp, with a running commentary on its innovative and sustainable features. Be sure to visit the charcoal-cooled larder, where the camp stores its fruit and vegetables out of the heat – and safe from raiding monkeys.

Children will enjoy the camp’s relaxed approach, the river setting and the funky architecture of the tent platforms and their decks and bathrooms. The fig-tree platform – a delightful walkway and deck area overlooking the river – is a big hit with kids. This is not a fancy camp and has most appeal for the sort of people who approve of children getting involved in the environment and other cultures. There’s plenty of space for kids to kick a football around and generally let off steam. In other words children are not only welcomed by the camp but will feel welcome by most other guests.

As much as being a safari camp, Basecamp Explorer is an experiment in sustainable tourism – and it’s a successful one. You might not expect to find such a good example of environmental best practice in an area that is perhaps the most despoiled in the Mara eco-system, but it is clearly much loved and proudly cared-for by the staff. All game drives are conducted across the river in the reserve itself. Basecamp Maasai Mara’s pluses are affordability, accessibility and environmental responsibility. The main negative is that you are in a busy area with lots of other visitors around.

Usual board basis
Full Board & Activities
Food quality
Guests’ food looked good when we visited in 2012, and included chilled curry soup, beef stew and cheesecake, but the food standards are not gourmet. Vegetarians can be catered for but will need to make requests in advance.

Family holidays
During a Kenyan family holiday at Basecamp Maasai Mara, children can join in with activities offered by the Dorobo club. This camp is a great example of eco-friendliness and cooperation with local communities, for ages 6+. Walks require children to be aged 15+.
See ideas for Family holidays
Photography holidays
Sitting on your deck with a camera at Basecamp Maasai Mara is always rewarding. Birds and monkeys often fill the trees near the tents, and there are areas in camp where you can get uninterrupted views across the Talek River to the herds of game in the reserve.
See ideas for Photography holidays
Cultural experiences
School visits are on the agenda here, and can be very worthwhile. The 2-hour walks around the Talek community area include background on the local economy. A group of women make souvenirs, and the proceeds of these go back to the community.
See ideas for Cultural experiences

Attitude towards children
‘We are a family place’
Property’s age restrictions
15 is the minimum age for walks outside the camp.
Special activities & services
Children can take part in the Dorobo club: making bows and arrows, butterfly catching, skirt making and beadworks.
Equipment
Cots are available, but no highchairs.
Generally recommended for children
Yes, very much so.
Notes
Although the camp is fenced on the land side, there is open access to the river, so little ones must be under constant parental supervision.

Since mid-2018, many of our travellers who stayed at Basecamp Maasai Mara have kindly recorded their wildlife sightings and shared them with us. The results are below. Click an animal to see more, and here to see more on our methodology.

Communications
Guests can obtain a free WiFi password from reception, and a laptop is available. The camp has cellphone coverage.
TV & radio
None

A base for the Maasai Beading Brand

Set at Basecamp Maasai Mara, next to Talek village, a fair-trade certified entrepreneurial initiative is empowering disadvantaged Maasai women and preserving the Maasai beading tradition. The Basecamp Maasai Brand (BMB) is a community-based handicraft workshop which provides a source of income to over 150 Maasai women, all between 17 and 60 years of age while indirectly benefitting about 600 people.

The artisans receive directly 55% of revenues, the rest covering salaries for the Management group and tools. The women are also involved in the pricing strategy, which takes into consideration the cultural significance of the product being sold. To date, 60% of the women have installed solar panels in their homes, covered education costs for their children up to secondary school level and bought water tanks which provide them with clean water. Additionally, the communal setting at the BMB workshop provides them with an appropriate environment for exchanging opinions and ideas.

Products manufactured are high-quality and eco-conscious, using Maasai glass beads and leather as well as recycled or waste materials such as scrap metal. For example, a thread made from strands of recycled plastic food bags.

Guests can directly support Maasai artisans by visiting their workshop at Basecamp Masai Mara or purchasing products from Basecamp Explorer’s camps in Spitsbergen and Kenya. Donations are also encouraged as contribution to a goal of raising USD 20’000 for upgrading the BMB workshop site, enabling the Maasai women to introduce more designs and widen the range of their beading products.

Malarial protection recommended
Yes
Medical care
The camp has a contract with the CMF clinic in Talek. In an emergency, guests would be evacuated by the Red Cross or Flying Doctors via Ol Kiombo airstrip.
Dangerous animals
High Risk
Security measures
There are whistles in the tents to attract attention in case of emergency. The camp is fenced on the land side, but not on the river side; ‘Beware the Crocodiles’ reads one sign. Askaris and armed police are usually on duty at night; an askari is usually on duty by day.
Fire safety
Fire extinguishers are positioned at every tent and there are three fire assembly points. Staff are trained by external trainers who visit every six months.

Disabled access
In Place
Laundry facilities
Full Laundry Service - Extra Charge
Money
Safe deposit at reception
Accepted payment on location
Cash payments may be made in US dollars, pounds sterling, or euros, as well as Kenyan shillings. Visa and MasterCard are accepted with a 4% surcharge.

Rekero is an unpretentious, high-end safari camp, for travellers who take their wildlife watching seriously and are prepared to pay for an exceptional location.

Little Governors’ Camp sits by a swamp (an old oxbow of the Mara River) in the Mara Triangle sector of the Maasai Mara National Reserve. It has its own balloon-launching site.