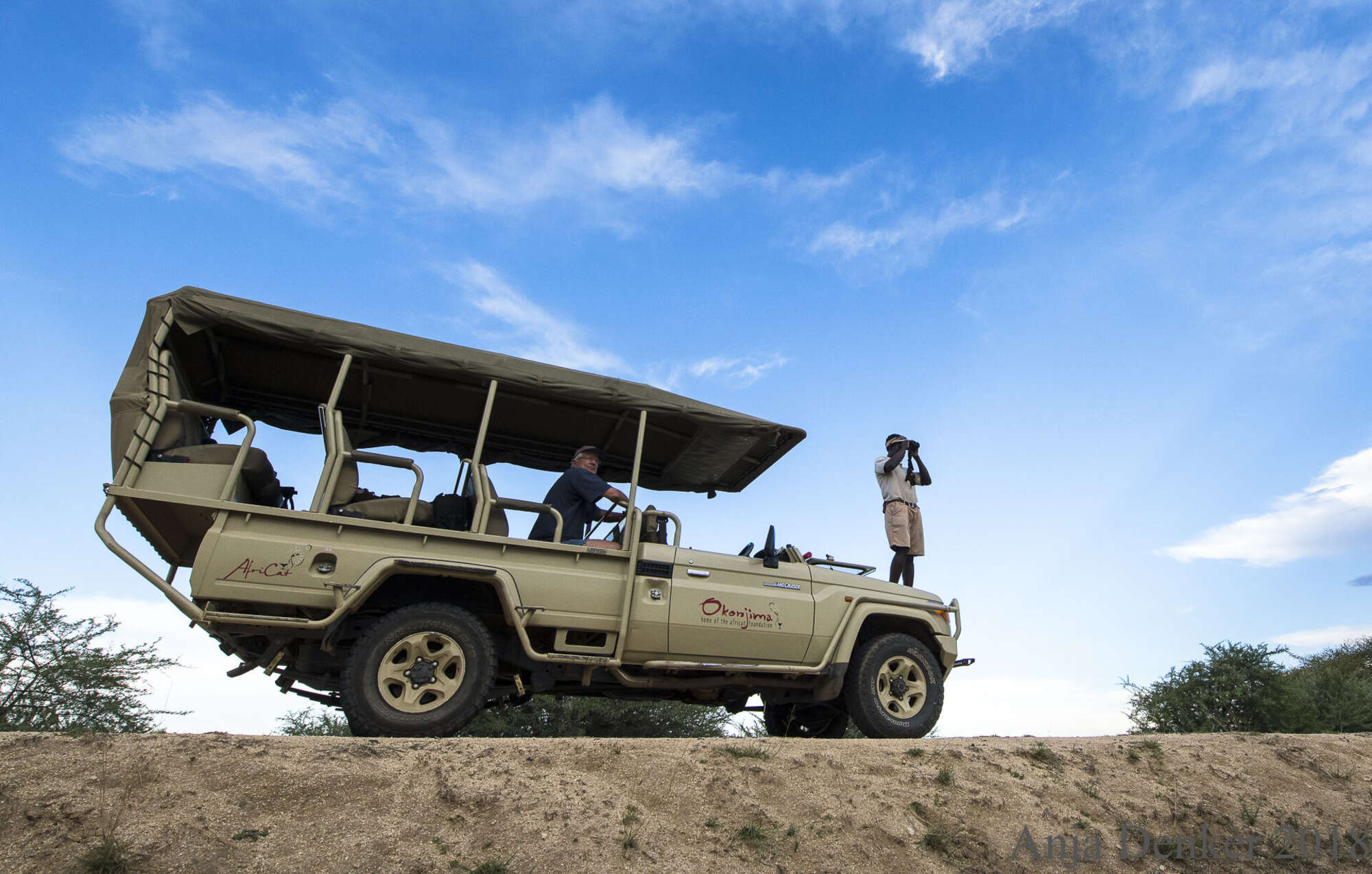 2 nights Arrived 31 Jul 2013
"Okonjima is a place that gave us mixed feelings.

It gives the opportunity to get close to cheetah and leopards, big cats you won't see at Etosha except when you're lucky. The Africat Project is very informative and does a good job it seems. On the other hand it sometimes gives the impression of a commercial fenced in safari park.

The accomodation is good but not so impressive as the glossy brochures and website show. The bungalows are concrete buildings with less attention to style than other lodges in Namibia. The food is good but nothing more than that, we got much better food in most other places. Maybe travelling in Namibia got us spoiled an bit?

The tracking of cheetah and leopard is obvious less exciting than finding animals in the wild. They only track a few leopards they know they can find rather easy, although this still is not a guarantee. Tracking cheetah seems to be easier.

It was clear that at least our guide only wanted to track the animal you payed the activity for. Finding the other cat was for the next activity to pay, although he sometimes mentioned 'to stay in the car because there was a leopard close by'.

The visiting of the evening hide is a joke. In fact the guides only empty a bucket and then the waiting porcupine chases every other animal away (I saw a flash of a genet cat). There is no chance to stay there waiting for other animals, because the (noisy) guides want to return as soon as possible to the lodge! This gave us a very uncomfortable feeling...

2 nights Arrived 29 Jul 2013
"A taste of paradise. Everyone was enthusiastic about the camp and activities. The upgrade was definitely appreciated.

The bird seed was great for attracting the birds and although a small gesture was appreciated as we saw a huge amount of birds attracted by the food.

2 nights Arrived 25 Jul 2013
"On arrival we were informed that we had been upgraded to Bush Camp.

Staff were slightly business like when we arrived but guides very friendly, and after initial welcome all staff very friendly. We did not arrive in time for evening game drive which did not matter as we were there for 2 days, but it would have been helpful to have been alerted to this if we had only been staying one night.

Good accommodation although I repeatedly fell over an unmarked, unlit step in our room (light present but no bulb).

Excellent viewing of cheetah and 2 leopard at close quarters (although we were warned there was only 50% of seeing leopard). Also porcupine and honey badgers at night hide.

Obviously everything here is a bit more "laid on" and not so genuinely wild but it does mean you have a good chance of seeing leopard which it would be sad to miss. Starts to bring you back to civilisation before the last drive to Windhoek." See all these reviews: 15n in Namibia
Experience Report
Overall Rating:
Excellent
Location:
Good
Service:
Excellent
Activities:
Excellent
Rooms:
Good
Food:
Excellent
Facilities:
Excellent
Mr C & Mrs S
UK

2 nights Arrived 24 Jul 2013
"We had the experience of cheetahs 2 metres away, a leopard palyng with it's cub and also eating its kill up a tree - unbeatable photo opportunities; although the area is fenced and the animals used to human contact, the area is large and you'd be pushed to get a closer view of leopards in the (semi) wild.

1 night Arrived 11 Jul 2013
"I loved the imaginative yet simple accommodation. It was inspirational.

I had on arrival gone out on a very successful expedition looking for and finding a leopard. This was followed by a delightful evening meal. The next morning an early start for another expedition when we found a family of cheetahs, 1 sister 2 brothers. They had become estranged after an early morning hunt and the sister of the 2 brothers was calling for her brothers by putting much effort into a "meow" that had a powerful vibrato sending it long distance. I walked ahead of the group of people and close to the female cheetah. I wanted to talk to her but didn't. She knew I was just a few metres behind her and she and I both,were comfortable. She was reunited with her brothers and there was much joyful licking going to and fro. This was an experience of a lifetime for me.

After that we rode in the truck and the driver/guide managed to find a Leopard and her cub. This too was a memorable experience." See all these reviews: 5n in Namibia
Experience Report
Overall Rating:
Excellent
Location:
Excellent
Service:
Excellent
Activities:
Excellent
Rooms:
Excellent
Food:
Good
Facilities:
Excellent
JBB
Surrey

First of all our stay there was very brief and everything was extremely rushed - this may have been because we stayed at a previous location a night longer than originally planned and so had to discard a night somewhere else. Because of the rush I may be a little more harsh in my judgement than is fair.

Okohjima sounded a very interesting nature reserve and we were looking forward very much to spending the last night of our holiday there.

We arrived at lunch time - taken to our room which was well appointed, spacious & had a fantastic view.

We then returned to the restaurant & along with another couple tried to get some lunch. This proved quite difficult & took up some considerable time but eventually some food did arrive.

It was quite to rush to join the afternoon safari in search of leopards (which we didn't find) & then got back quite late to rush for supper followed by a rush to the waterhole to wait for the arrival of Porcupine. The last of the evening was taken up with packing for a pre-breakfast departure for the airport.

Some of my feelings about Okonjima may have been different had there been more time to spend there.
As it is I do not feel they have their act together somehow - the reality of the place does not live up to their very glossy brochure.

The room was good.

The service was almost non-existent.

The Leopard safari was hugely disappointing - when eventually the guide admitted he was unable to get any signal on the radio device he told us there were only 2 animals that wore the transmitters & if, as they probably had, mooched off to the distant hills, he would not be able to find them. This was said as if he was used to saying it! Despite what the brochure says - I wonder how often a visitor actually sees a Leopard & how big a part does Photoshop play in the production of photographs on page 2 of their brochure?!!

The food was poor.

The waterhole was simply awful! Looking at the stunning photographs in the brochure I can't help but wonder if maybe the standard of waterhole goes down with the standard of the accommodation?!!! After the relaxed atmosphere around the waterholes of Etosha it came as a surprise to be led down a track and into a hut to peer out at a dimly lit manky tank in the ground. Our guide then emptied a bucket of kitchen waste beside the hole & proceeded to tell us all to 'Be quiet - be quiet' whilst he went on talking loudly to a friend. Whilst we waited he clearly knew something we didn't - that regardless of any noise the Porcupine would turn up for the evening meal they knew he would bring them!!!!

Staff a bit variable in attitude

2 nights Arrived 30 May 2013
"It is a good camp but compared with the others perhaps the one least to my taste. It felt a little anonymous and more like a hotel.

On the other hand the game viewing was excellent even though radio tracking does not have the same excitement as "ordinary" tracking. However, I managed to see wild dogs which I've Always wanted to so that was a highlight." See all these reviews: 12n in Namibia
Experience Report
Overall Rating:
Good
Location:
Good
Service:
Average
Activities:
Average
Rooms:
Good
Food:
Good
Facilities:
Average
Mr & Mrs H
E Sussex

The activities were well planned and comprehensive with excellent guides.