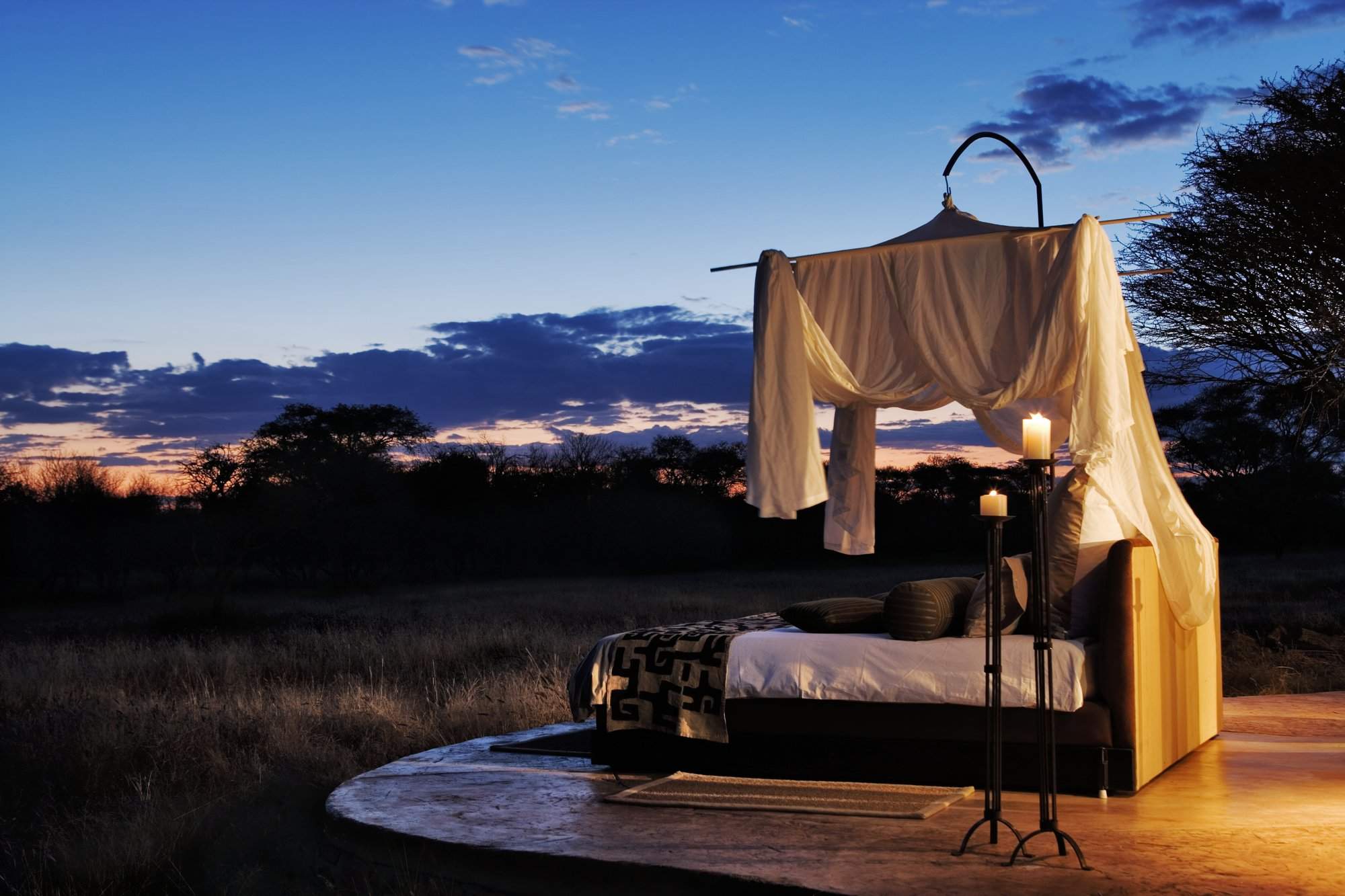 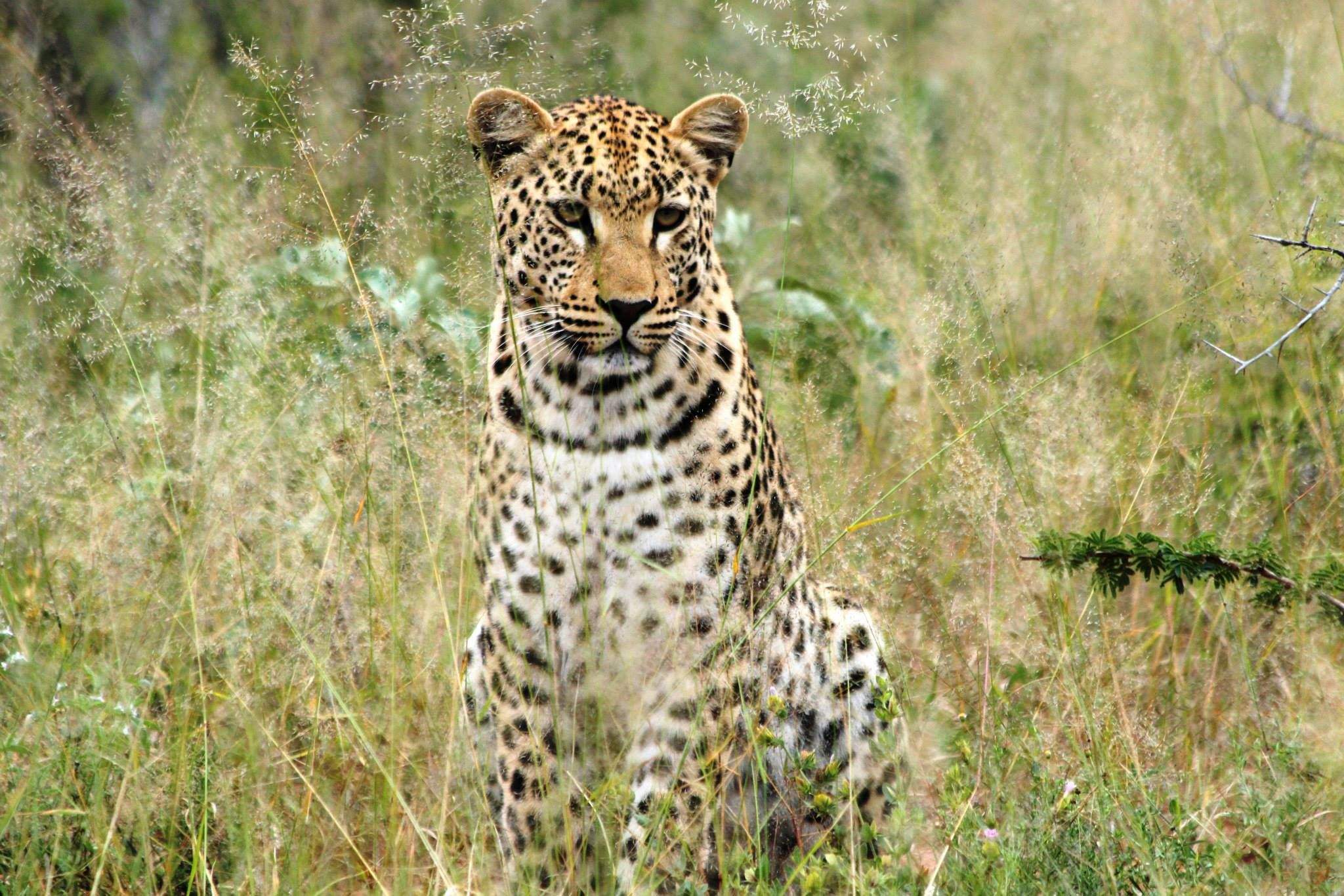 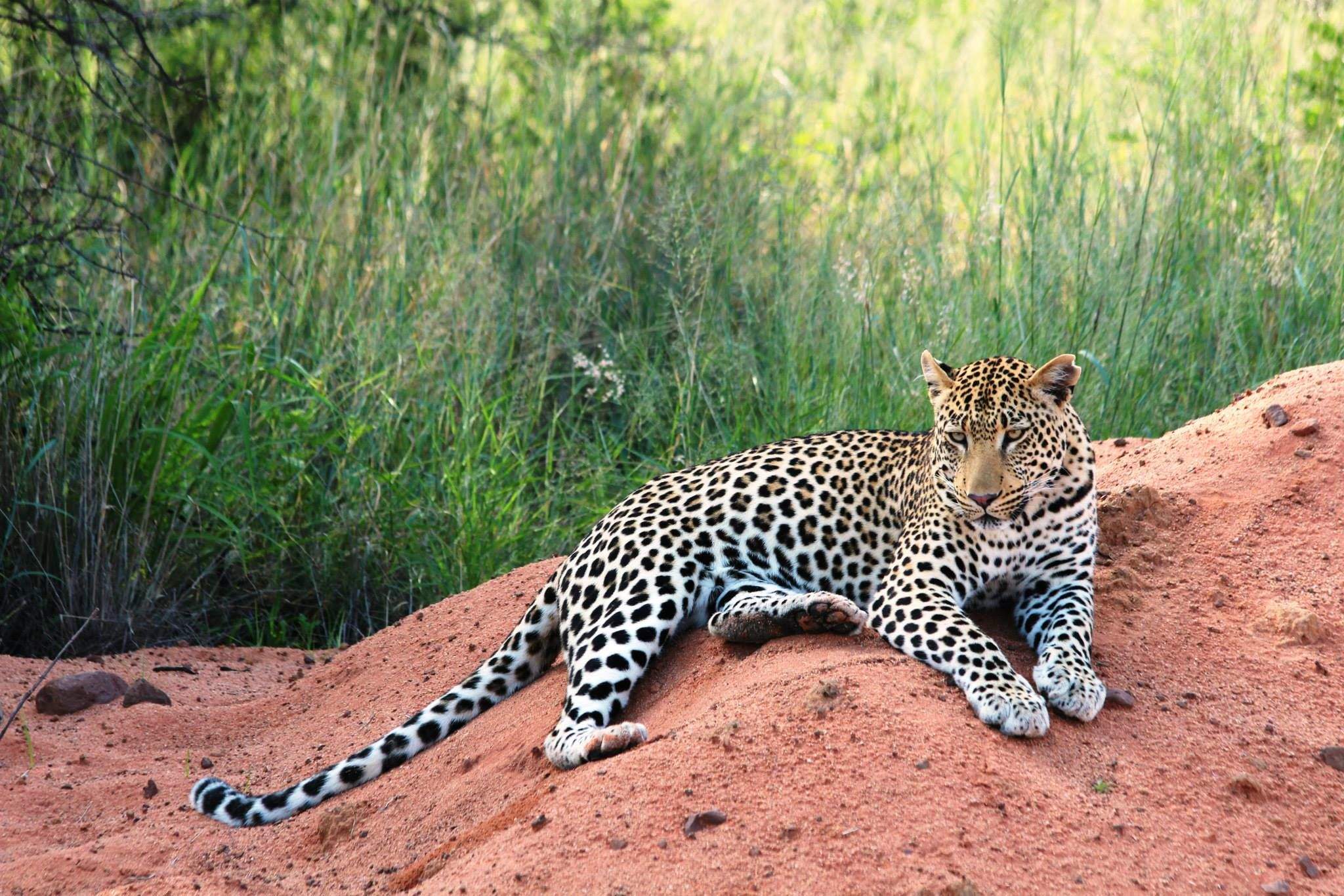 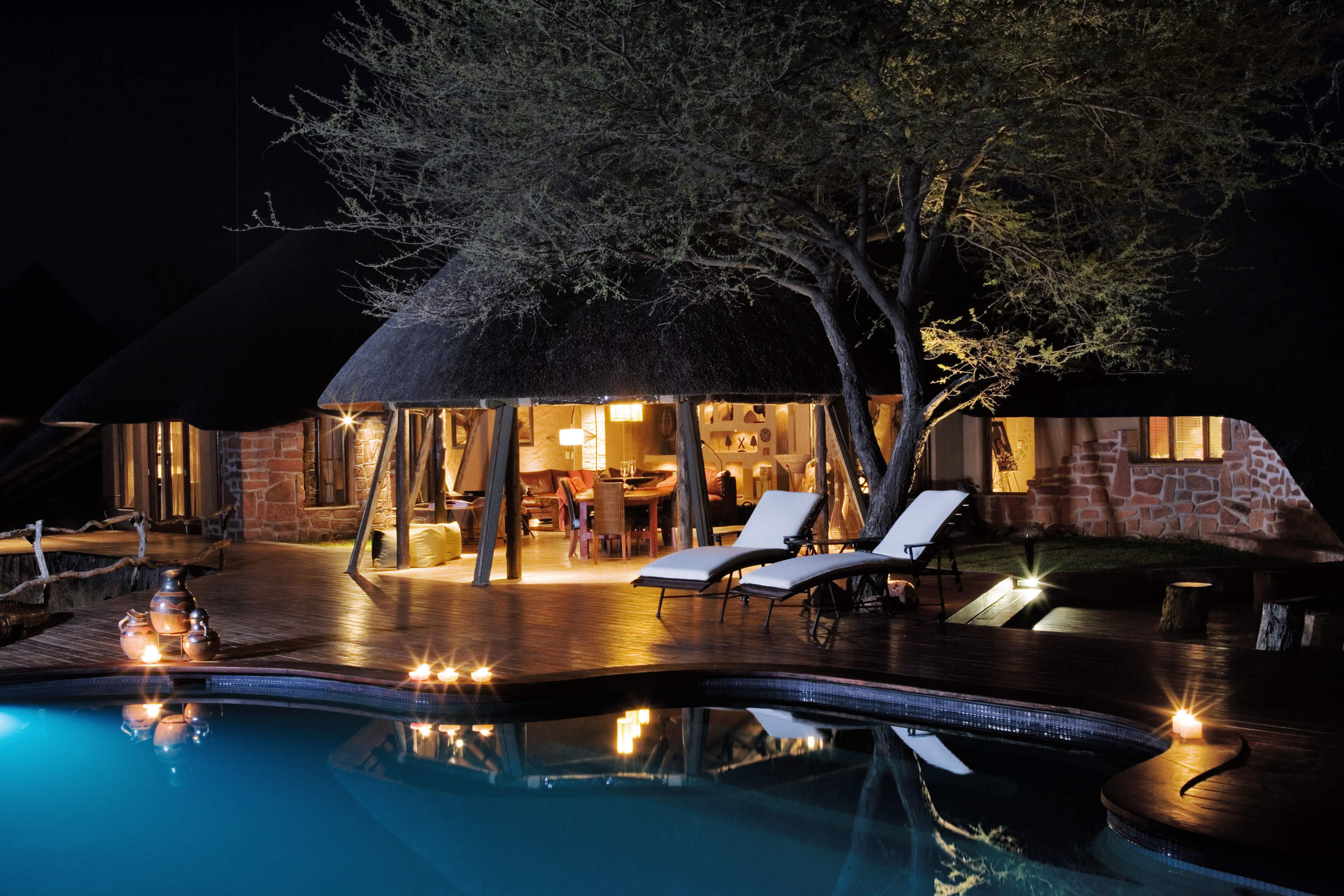 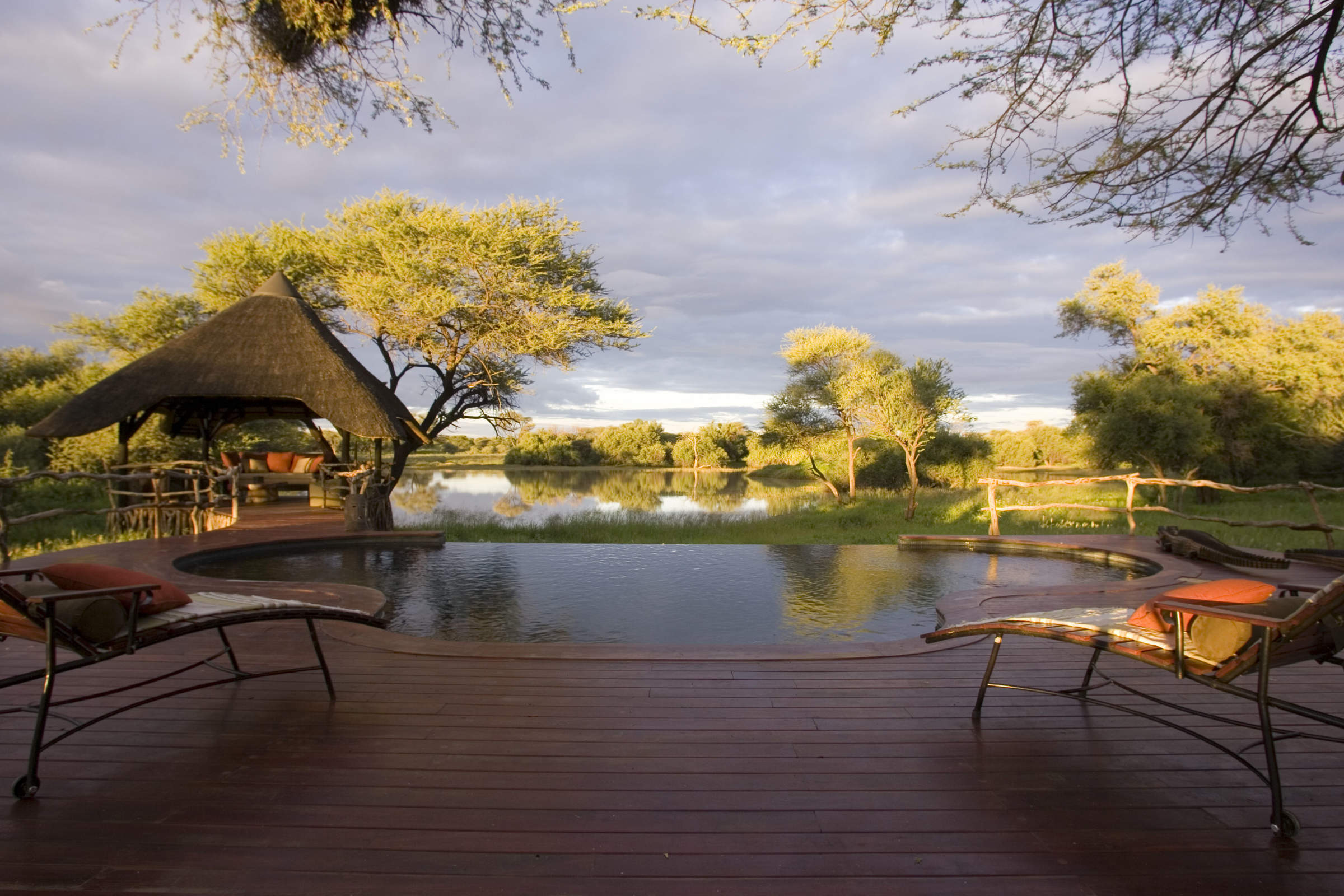 12 independent comments and wildlife information from our travellers who have visited Okonjima Villa and kindly agreed to share their thoughts. They do not necessarily represent the views of Expert Africa

"Our other most favourite place in the world."

1 night Arrived 19 Jul 2019
"Sharing the title with Erongo, Okonjima enjoys the beautiful topography of Erongo with the abundant opportunities for wildlife spotting a la Safarihoek.

We were excited about staying at Bush Camp as it looked very lovely. But when we reached the gate we discovered we had been upgraded to 'The Villa'. This is an exclusive property away from the rest of the accommodation and with its own chef, driver and 'butler/concierge'. It also has its own infinity pool and waterhole. This is movie star stuff and the first (and probably last!) time we will get to experience such a level of exclusivity.

The wildlife spotting is much more democratic and everyone gets to track radio-collard Leopard in the dry river bed and get up close to the Cheetahs at the AfriCat foundation centre. If you make time to visit the latter you'll add another dimension to your trip here. The history of the place, from farm to trophy game reserve to conservation success story - thanks to the incredible Wayne whose vision it is." See all these reviews: 11n in Namibia
Experience Report
Overall Rating:
Excellent
Location:
Excellent
Service:
Excellent
Activities:
Excellent
Rooms:
Excellent
Food:
Excellent
Facilities:
Excellent
Sightings Report

"Much more to Okonjima as cats"

2 nights Arrived 27 May 2019
"We had included Okonjima in our itinerary because one of the animals we really wanted to see in Namibia were cheetahs, so we were disappointed that the cheetah tracking ceased in between booking our trip and our stay (this is because the leopards have been so successful it's difficult for the cheetahs to thrive). However the experiences we had were really exceptional, and more than made up for this.

The villa is a much smaller property that the principal camps at Okonjima and is also out in the reserve rather than in the fenced off area where the other camps are (wilder, but also, as we discovered, colder!). It's quite a "luxury" property - white fluffy towels, a bath, outdoor & indoor showers, quite a change as we were coming from a more bushcamp-style property at Mundulea! The villa was originally designed as a private safari house for one large group but it's now available to all - there is a large central house with a pool and dining area, and a very welcome fire, overlooking a well-used waterhole, and two freestanding smaller villas which are the guest rooms. There's a chef, a manager and more staff than were staying there, although the villa is not staffed all the time - but there are always drinks available for you to help yourself. From the deck you can see lots of animals - antelope, birds, giraffes, warthogs during the day, and brown hyena and a whole family of porcupines very close at night.

What we did not expect was the quality and variety of animals we saw on our activities. Like most guests, our first evening was spent tracking the collared leopards, and Nova took a little while to find. When we did find him, he obligingly wandered around near the vehicle in good light for a while. Rohan, our guide, had helped out his colleague from Plains Camp and their vehicle joined us; we were then heading off to leave Nova to go about his business while we had our gin and tonic. The other guide then called Rohan to say there was a honey badger - we did an about turn and found a young honey badger digging in the bed of the river where we saw the leopard. We were pretty excited by this - they're usually shy, if ferocious, and noctural, and we'd only seen one before in some 15 year of fairly regular safari going. Then we realised the leopard was back. He walked straight past our vehicle and sat about a metre away from the honey badger, who was oblivious, digging his hole. After thinking for a minute or two, the leopard leapt - and was spectacularly repelled by the much smaller honey badger! When even the guides are getting excited (you can find Rohan's footage on Instagram) you know you're seeing something special.

That wasn't all the evening held for us; after a delayed gin and tonic, we headed back through the darkness to camp and came across another first - an aardvark.

And that was just the first night. By the time we'd finished, as well as seeing our cheetahs (the rescued cheetahs at the foundation), we'd walked with rhinos, and seen not one but two more aardvarks! (One with another leopard sat on the other side of the vehicle, wondering why he wasn't the star of the show for once). Rohan, our guide, was knowledgeable and enthusiastic and really went out of his way to make sure we had a great time and some special experiences - not just big animals, but also the endemic south-west African birds and a lot of the smaller stuff.

Okonjima is a very well managed reserve with comfortable lodges - we visited Plains camp and although it would have been much too big for us, it was well-designed and I think would be ideal for families - that is easy to access and would be a real highlight of a first visit to Africa. But more experienced safari-goers will find something for them here too, although you're clearly not in the kind of pristine environment you might find in, for instance, the big national parks in Zambia. The reserve takes its role in conservation and research very seriously and if you are interested, there is a lot to do and learn. The villa is a very spiffy and more than comfortable place to say, but it was the wildlife experience that really stood out for us.

And one last aside - we found when we left that the gardener had very kindly washed our car for us, and I think the car rental guy had never had such a clean vehicle returned to him before!" See all these reviews: 9n in Namibia
Experience Report
Overall Rating:
Excellent
Location:
Excellent
Service:
Good
Activities:
Excellent
Rooms:
Excellent
Food:
Good
Facilities:
Excellent
Sightings Report

"Wish this was our permanent home!"

2 nights Arrived 13 Jul 2018
"My husband & I rented the villa, which can fit up to ten guests. It was just the two of us & at first, we felt a little ridiculous having our own chef & guide & the big place to ourselves, but we quickly got over it! :)

Our guide Richard, his lovely wife Zanelle was our hostess & chef Christopher made our stay so special! I am still craving Christopher's amazing & gigantic omelettes! We got to approach a cheetah on foot & saw several leopards, including one stalking a warthog (the warthog got away).

The accommodations are amazing - we loved sitting around the fire pit with drinks & snacks each night after the p.m. game drives, then siting around the fireplace in the room after dinner or outside overlooking the waterhole. The visit to the AfriCat Foundation was also very educational, to see the great work they do for the cats.

2 nights Arrived 8 Oct 2013
"I don't know what we did right but we were upgraded from the bush camp to the villa. Everything about the experience at the villa was fantastic!

The room, location, food, service, game drive (Pieter was great!), and cat tracking. Being at the Okonjima villa was the perfect way to end our trip. Staying at the villa made me feel how rich people must feel. Pampered and special." See all these reviews: 19n in Namibia
Experience Report
Overall Rating:
Excellent
Location:
Excellent
Service:
Excellent
Activities:
Excellent
Rooms:
Excellent
Food:
Excellent
Facilities:
Excellent
Mrs B &co
Switzerland

2 nights Arrived 13 Mar 2013
"This is a special place and team. Villa very nice and comfortable. The team of Anna-Marie, Defriss, Martin and Martin are all excellent - felt as if we were staying over with friends.

2 nights Arrived 23 Oct 2011
"What to say. Marvellous chef Martin, Fantastic hostess Joanna and remarkable guide Jacques. So glad we managed to get this as our last place - I'm glad I hung out for it as it was perfect.

[ Ed: this traveller went on to comment about Main Camp. Because she didn't stay there, we requested that she allow us to remove those comments. She agreed to this, and they don't appear here. ]

2 nights Arrived 19 Aug 2010
"Absolutely outstanding in every way. The setting and the luxury of the experience cannot be bettered. The waterhole itself provided some of our best sightings, including porcupine and honey badger.

Hearing cheetahs purr was very special and tracking a leopard with telemetry on our last afternoon is one of the most exciting things I have ever done.

Food/wine were first class - loved the creative sorbets from the chef (pear and rosemary!) Really informative drives - info not just about the reserve but also about living with the local (farming) community. Good awareness of the challenges.

2 nights Arrived 22 Sep 2008
"We were lucky enough to be upgraded to The Villa and had the best accommodation we have ever had in the bush. One wonders if such luxury is strictly necessary but having said that we enjoyed every aspect of it !!

We occupied the North Suite which was the biggest and best of all the rooms with wonderful views. Anja Johann and their staff gave us superb service and wonderful food.The work and achievements of the Africat Foundation in their rescue and rehabilition programme was carefully explained and demonstrated to us by Johann on our excursions around the reserve and we had some excellent close encounters with leopards, cheetahs, hunting dogs and hyenas.

At night the water hole in front of the Villa attracted porcupines, honey badgers, a genet and a giant eagle owl. Our last morning was spent on a lovely walk on which we were given insight into Bushman crafts. A memorable two nights." See all these reviews: 12n in Namibia; 2n in Zambia
Experience Report
Overall Rating:
Excellent
Location:
Excellent
Service:
Excellent
Activities:
Excellent
Rooms:
Excellent
Food:
Excellent
Facilities:
Excellent
Showing 1-10 of 12
12
Next
100%
12 reviews of Okonjima Villa by travellers since August 2007
Overall rating by our travellers
12
0
0
0
0
Filter by month