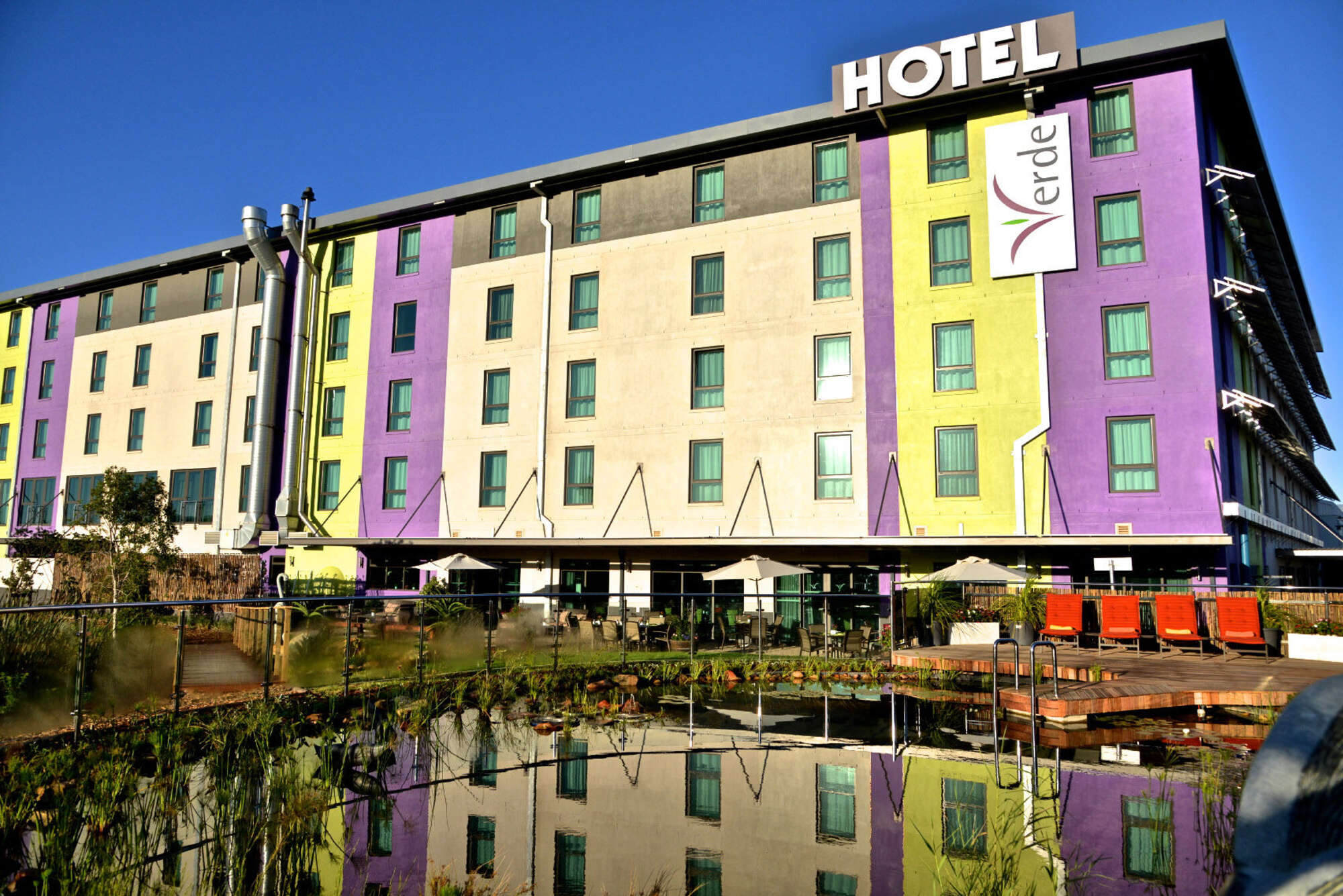 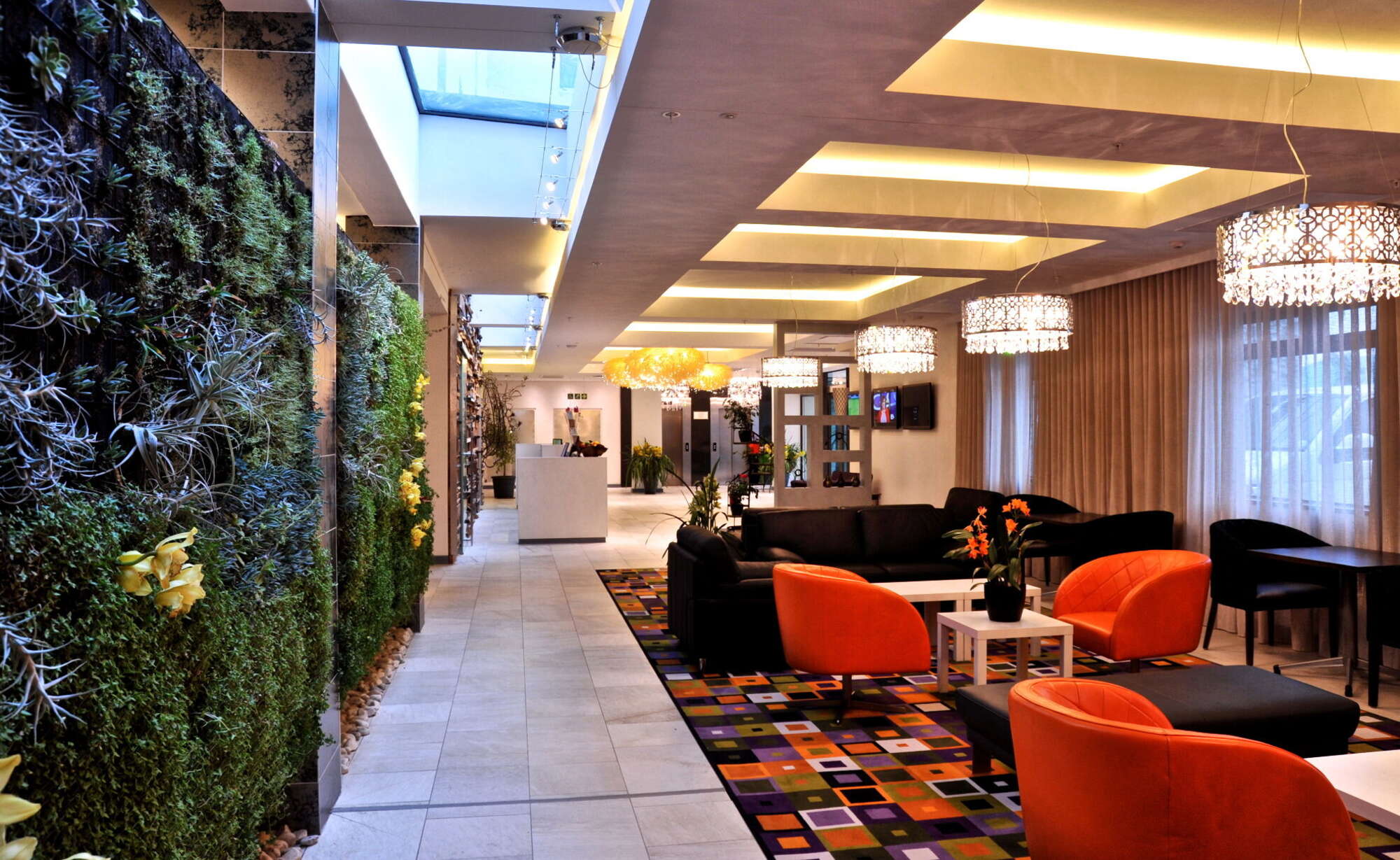 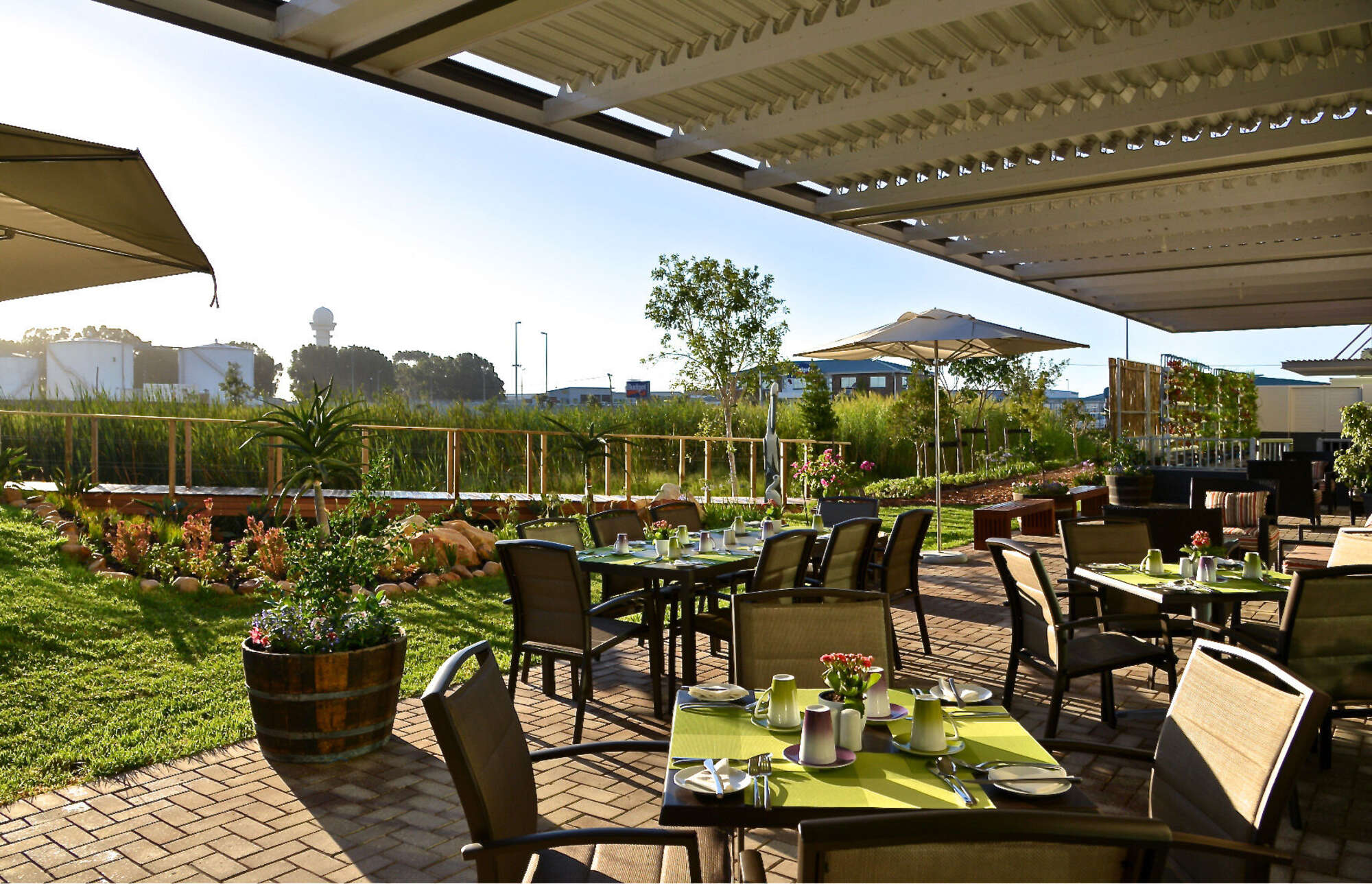 ... Airport and a 20 -minute drive (depending on traffic) from central Cape Town. Opened in August 2013, ‘Africa’s greenest hotel’ is high-tech yet comfortable, with 145 contemporary rooms, and is very much focused towards the international traveller.

Guests at the Hotel Verde are met by friendly, efficient staff at the modern glass reception desk. This is backed by a slate wall, where five brightly coloured clocks show different times around the world.

Ideal for late arrivals or those who just want a light snack is Verdeli, Hotel Verde’s deli, which is open 24 hours a day. It offers freshly prepared meals that can be taken to your room or enjoyed in the modern public areas. Options vary daily.

The restaurant at Hotel Verde has been designed to provide guests with good, wholesome food in a relaxed setting. Tables and chairs are dotted around inside, as well as outside on the terrace overlooking the grounds. Hotel Verde grows its own herbs and lettuces, while all other ingredients are sourced from within a 160km radius of the hotel, thereby supporting local producers. Each Wednesday, between 7.00pm and 10.00pm, they host a weekly ‘Earth Hour’ celebration, when all non-essential lights and appliances are switched off in the public areas and guests can enjoy a candlelit dinner. A special menu that requires no electricity to cook is provided on that evening.

Beside the restaurant is the bar, open from noon until 1.00am every day. It offers a unique range of cocktails as well as wines, juices and smoothies, and beers, which – in line with the hotel’s ‘green policy’ – are on tap rather than bottled. Similarly, the filtered water is bottled on site to reduce their carbon footprint.

The lounge itself is fitted with vibrant orange and black contemporary furniture, with a small library in one corner and a music corner, with instruments that guests are encouraged to play. Beside the lounge is a work area where guests can use their laptops and have meetings.

Hotel Verde’s 145 rooms are reached along corridors with brighly coloured carpets and artwork by local artists. The rooms are well-equipped, with tea- and coffee-making facilities, including fresh milk, laptop-sized electronic safes, air conditioning, Wi-Fi, flat-screen TVs, a desk and desk lamp, and international plug points. Only eight rooms have baths; the rest have showers. Hairdryers are also provided.


Hotel Verde offers an array of indoor and outdoor facilities. On site is a state-of-the-art 24-hour gym. Impressively, it offers power-generating equipment: the health walker and bicycles pump power back into the hotel’s on-site grid, and the user can see how much energy they have generated.

Outside, sunloungers sit on a wooden deck around part of an eco-pool, where small fish and tadpoles, rather than chemicals clean the water – and it’s quite safe to swim! There is also a 350m jogging track and an outdoor gym located in tranquil regenerated wetlands.

Hotel Verde offers complimentary transfers to and from Cape Town Airport every 30 minutes, as well as to the city’s Victoria & Alfred Waterfront. The complimentary Waterfront transfers depart at 10.00am and return at 6.00pm, but transfers at other times cost ZAR350 (about GBP20) for one person and ZAR30 (less than GBP2) for each additional person (costs correct at May 2014).

Hotel Verde’s green policy makes it a unique hotel in South Africa. As an incentive for guests to save energy, rewards are offered in the form of ‘Verdinos’, the hotels in-house ‘currency’, which can be used at Verdeli and at the bar. Rewards may be accrued by not using air conditioning, turning off lights, using the power-saving gym equipment, re-using towels and bedding and recycling waste.

By finding new concepts and angles to look at energy, water and waste reduction, the hotel has made itself completely self-sustainable. Other initiatives include recycling grey water from showers and baths, collection of rain water in a 40,000 litre tank (a recycled wine tank), immediate hot water, wind turbines, solar panels, lighting and regenerative drive elevators, meaning that they recycle the energy rather than waste it in heat. The hotel’s environmentally friendly approach has even been extended into the basement car park, where the walls have been painted by local graffiti artists, transforming a dark and dismal space into a bright and colourful area.

The unique Hotel Verde puts conservation, sustainability and guests’ comfort at the top of its priorities. Its rooms are cleverly designed and comfortable, to meet the requirements of individual travellers. Its outside areas are located in small regenerated wetlands – a magnet for local birdlife. And it is very tranquil; you would never guess that you were in an industrial area, only 400 metres from the airport! The hotel’s location and facilities make it a very good base for an overnight stop before or after a flight.

Location
Cape Town, South Africa
Ideal length of stay
Ideal for an overnight stay before or after and flight.
Accessible by
Self-drive or Fly-and-Transfer

Usual board basis
Bed & Breakfast
Food quality
When we visited Hotel Verde in May 2014, we didn’t stay long enough to eat here, but we understand that the meals are freshly prepared and imaginative.

Hotel Verde has a deli, which serves fresh food 24 hours a day – ideal for late arrivals – as well as a more conventional restaurant.

A breakfast buffet is available from 4.30am to cater for travellers leaving on an early flight. This consists of yoghurts, nuts and fruit, as well as a traditional cooked English breakfast.

For lunch and dinner, Hotel Verde offers a range of light as well as more substantial meals. They serve a variety of dishes, from favourites such as pizza (they have their own pizza oven), burgers and pasta to contemporary fusion dishes. The hotel grows its own herbs and lettuces, which are regularly featured in it meals, whilst all the other ingredients are sourced from within a 160km radius of the hotel, thereby supporting local producers. A blackboard is placed in the restaurant showing where the day’s produce is sourced and how far away that is.

Attitude towards children
Children are very welcome at Hotel Verde
Property’s age restrictions
There is no age restriction
Special activities & services
A separate children’s menu is available. Children are offered pizza dough to play with and make their own pizzas.
Equipment
Cots and highchairs are available
Generally recommended for children
We recommend Hotel Verde for children of all ages

Power supply notes
International plugs are provided in the rooms as well as in the main areas.
Communications
WiFi is available throughout the hotel and direct dial telephones are available in the rooms
TV & radio
All rooms have satellite TV.
Water supply
Mains
Water supply notes
All rooms have mains water for showers, basins and baths, with recycled water used for the toilets.

Hotel Verde is a leading example of an establishment built up with sustainability in mind ever since the beginning. Guided by strict conservation goals called ‘The Verde Principles’, the main priority of the hotel is to involve customers in its eco-friendly initiatives. Located near the airport, it offers Africa's first carbon neutral hotel experience by creating easily-accessible solutions that encourages travelers to offset their carbon footprint whilst on holiday.

The hotel grants guests a “carbon-offset” certificate at the end of their stay, creating a sense of inclusion and engagement towards achieving a better environment. The programme is a creative step to showcase ways in which guests can offset carbon emissions and get reward points for being environmentally friendly, even by simply working out at the gym, pushing the energy back into the hotel. This also serves as an educational initiative which aims to show visitors how hard it is to produce electricity versus how simple it is to waste it. Another way is only by using the elevators, fitted with regenerative breaking which allows them to recover energy as they go up or down. The financial benefits of staying “carbon-neutral” are going towards the Kariba REDD+ Project in Zimbabwe for improving the lives of local communities, as well as for reversing the negative results of threatened wildlife population and loss of forest.

Certified by Fair Trade Tourism and achieving numerous awards and certifications such as Double Platinum certification awarded by LEED - an internationally recognized green building rating, Hotel Verde is never short of thriving in each aspect of green practices.

Malarial protection recommended
No
Medical care
Doctors and hospitals are located in Cape Town
Dangerous animals
Low Risk
Security measures
A security fence and gate surround the property and a security guard is located at the main gate to the hotel.
Fire safety
Fire extinguishers are dotted around the property and main areas.

Disabled access
In Place
Laundry facilities
Laundry is available at an additional cost
Money
Laptop sized digital safes are provided in each room.
Accepted payment on location
Payment is accepted in SA Rands and all major credit cards are accepted at no additional cost.

Other lodges in Cape Town

In the quiet, leafy suburb of Newlands, the sophisticated Vineyard Hotel has close access to smart shops, sports facilities and the main sights of Cape Town.

Against the awe-inspiring backdrop of Table Mountain, Acorn House offers a traditional guesthouse welcome in a historic setting.

Camps Bay Retreat is a peaceful sanctuary set in a lush green private reserve overlooking the sea, close to one of Cape Town's most desirable beachfront areas.

Four Rosmead is a comfortable, very friendly guest house located very close to the city centre and all its nearby attractions.

Located on one of Cape Town's best beaches, the Long Beach is a great place to relax and explore, although it is further from the city than many other hotels and guesthouses.

The Cape Grace is set in the centre of Cape Town's Victoria and Alfred Waterfront. It's a perfect base for those wanting to be close to restaurants and shops.

Cellars Hohenort is a luxury hotel set in stunning gardens. Situated in the wine-growing Constantia Valley it is not far from many of Cape Town's attractions.

On the beachfront at Camps Bay, the Bay Hotel has luxury 5-star amenities, plus close access to one of Cape Towns best beaches as well as lots of restaurants, bars and nightlife.

Mount Nelson Hotel is Cape Town's oldest and most famous hotel. It's a place to be seen and the best address for a delicious afternoon tea.

The welcoming Twelve Apostles Hotel has a great location overlooking the ocean, just a short drive to the beach and restaurants of Camps Bay.