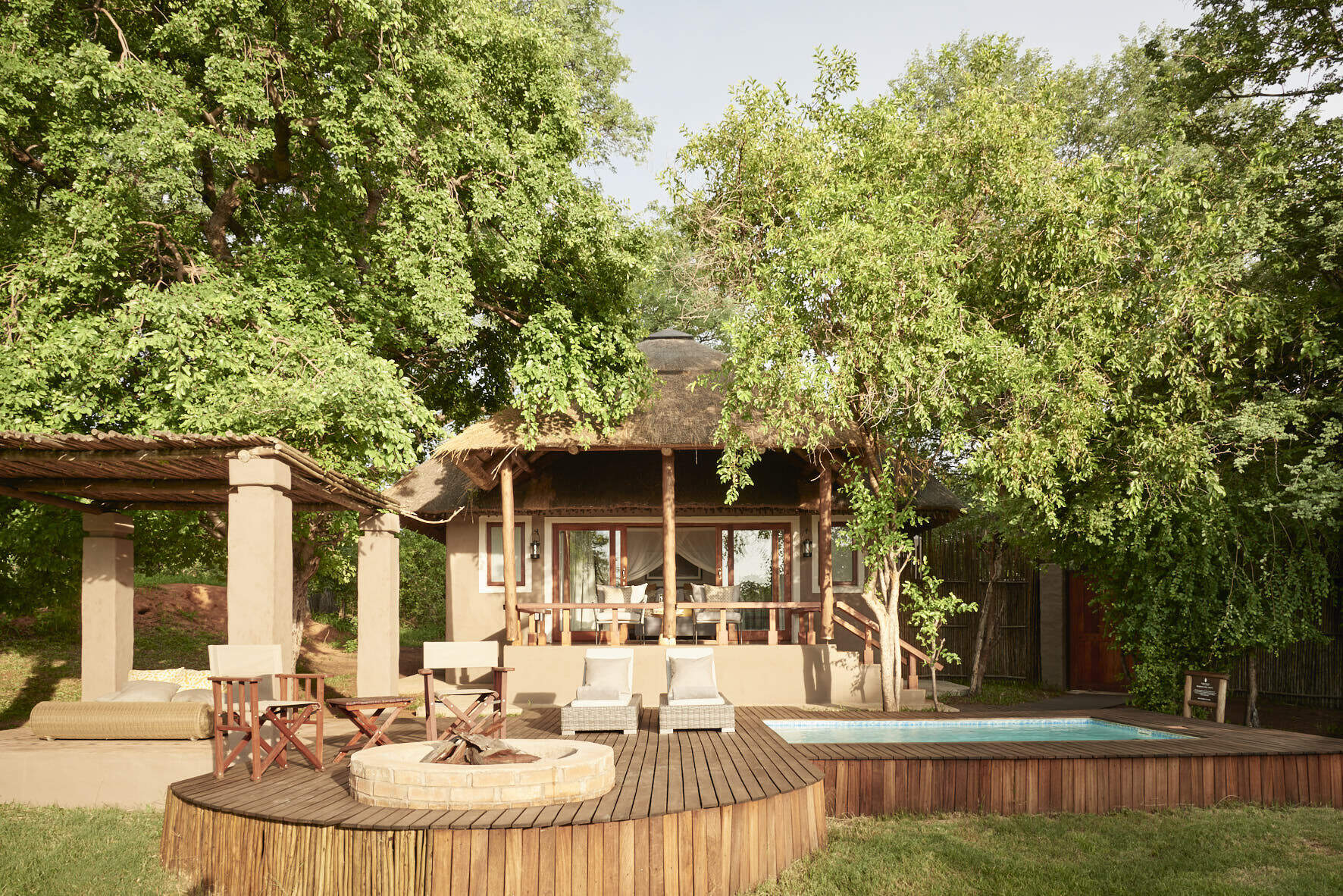 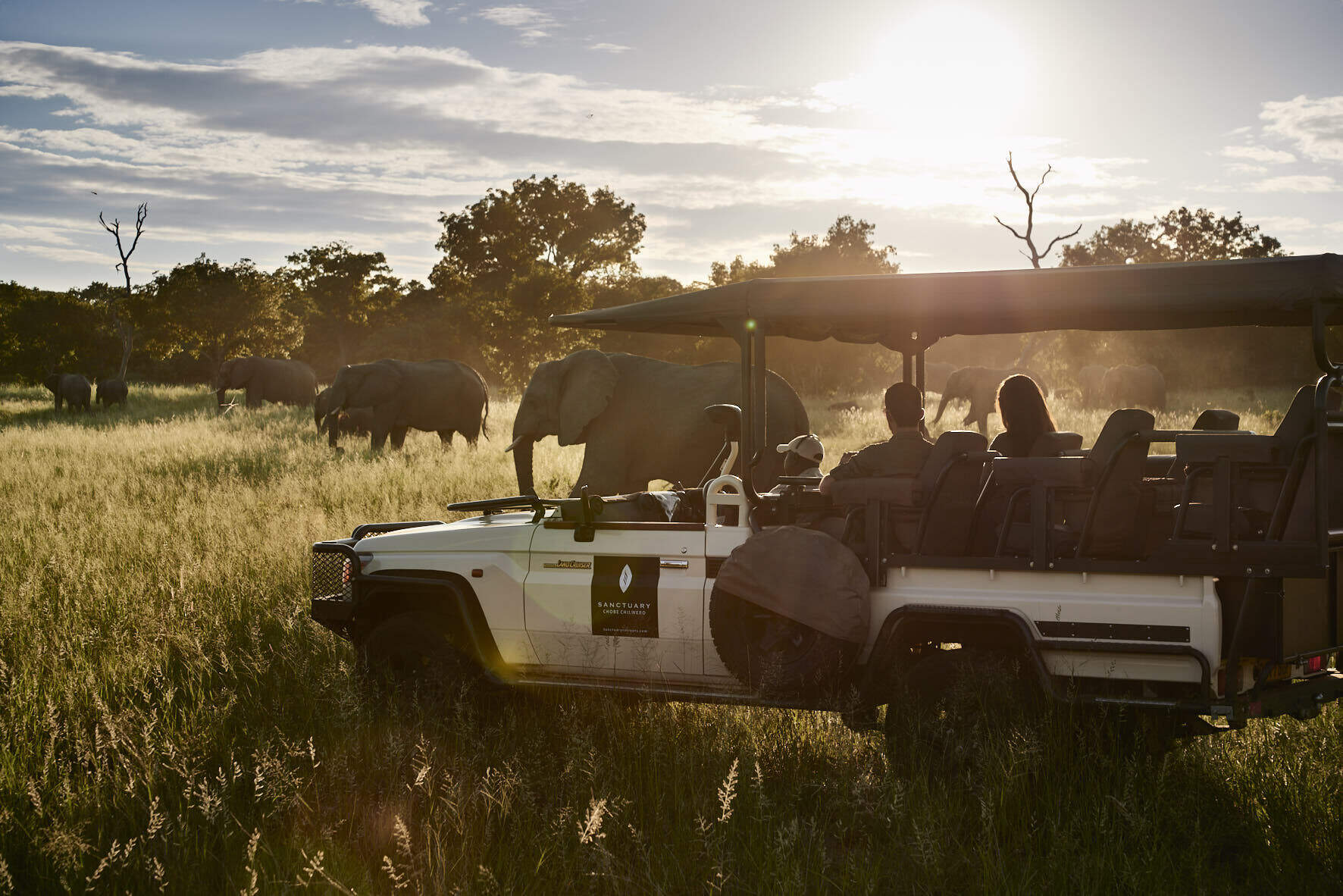 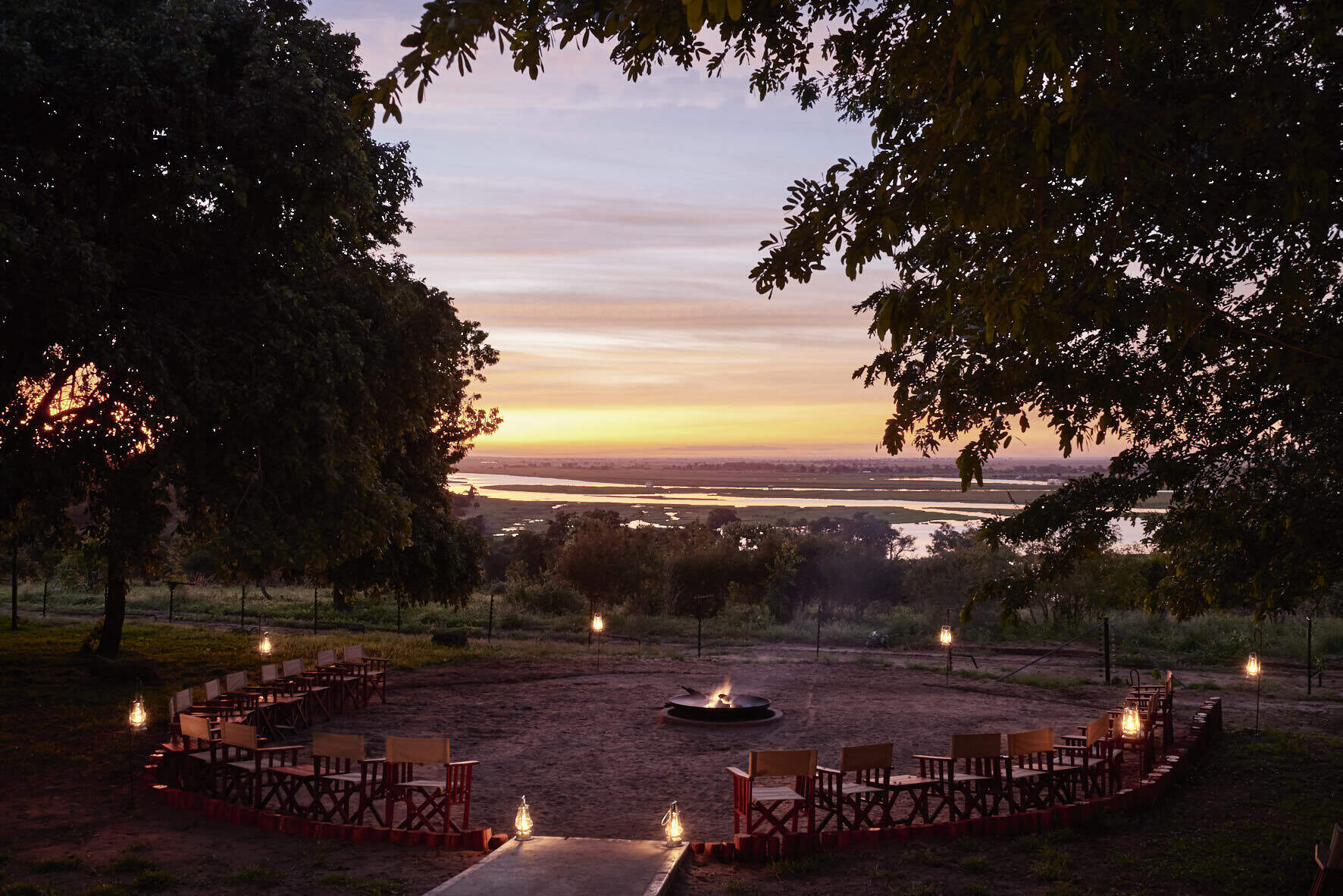 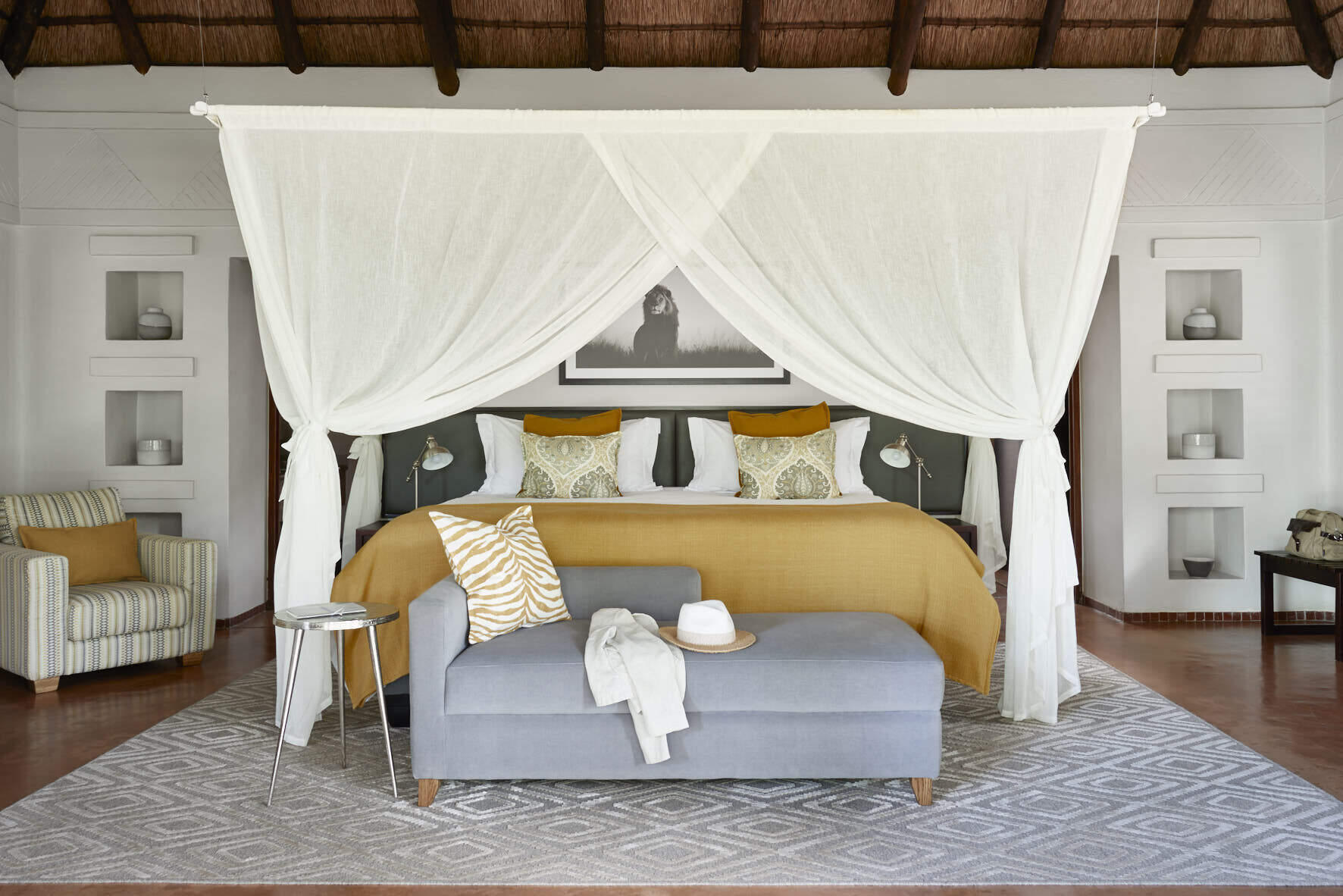 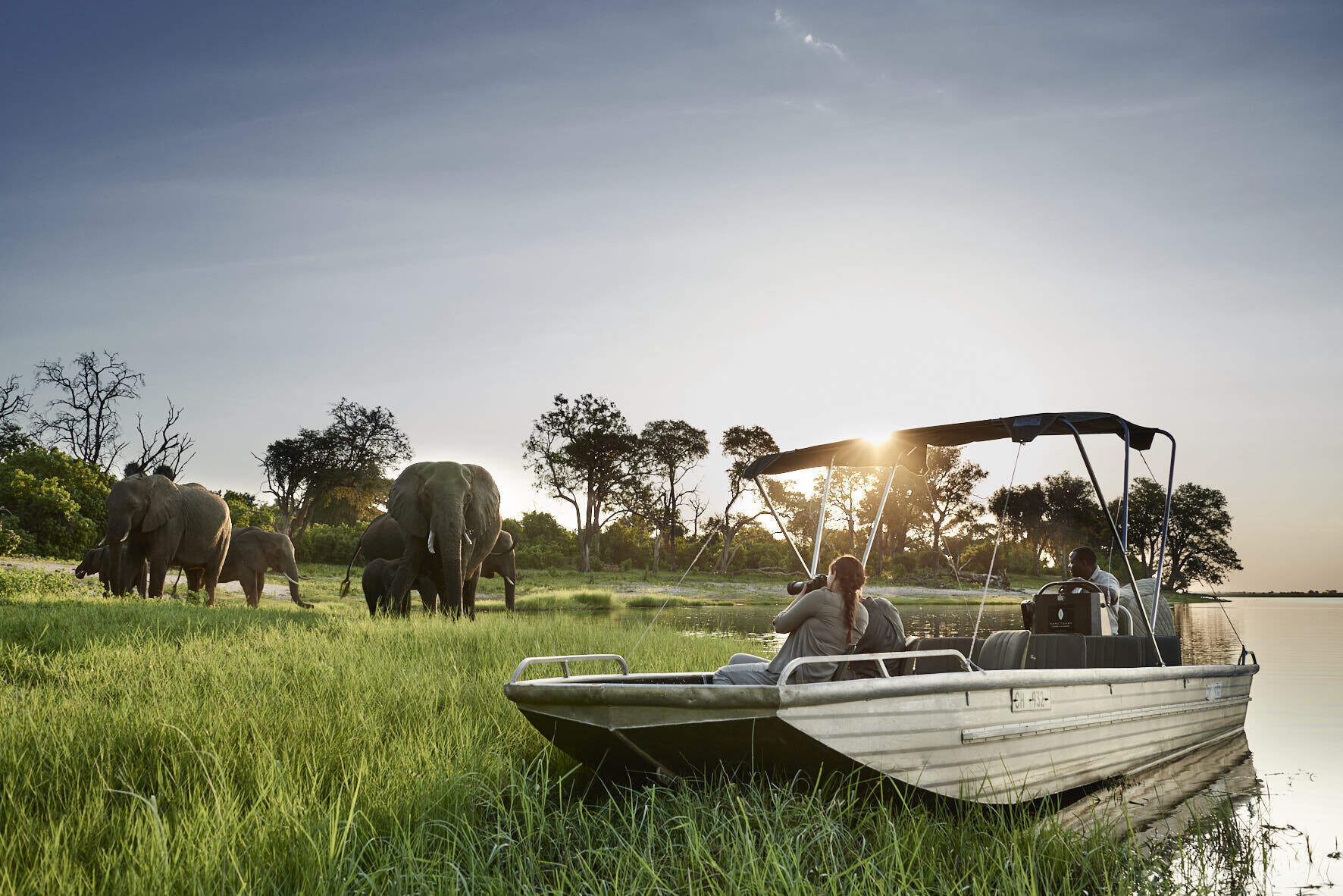 Chobe Chilwero is a sophisticated lodge perched on a hill near Kasane, bordering the Chobe National Park.

The views from here stretch over the Chobe River to Namibia and the floodplains that emerge when water levels drop.

The main area at Chobe Chilwero is a rather rambling complex with a large and exceptionally elegant lounge. To one side is a small library where, along with a selection of books and board games, you'll find a big-screen television hidden discreetly behind cupboard doors. But in pride of place, with views onto the gardens and beyond to the river, is the dining room, where guests may eat either indoors or out on the covered veranda. In addition there’s a well-stocked curio shop, and a discreet 'communications centre', where WiFi – which only works in this part of the building – is available to guests. The entire lodge has the feel of an exclusive country-house hotel – quite a step away from the usual bushcamp/lodge feel that you get elsewhere.

Even during the dry season, the grounds at Chobe Chilwero feel like an oasis of green, thanks to an electric fence that generally prevents errant elephants from trampling the manicured lawns. Thankfully, it's low enough at the front of the lodge not to detract from the views, though it’s not totally effective: on our last stay in May 2014 we were taken a very long route from the dining area to our suite in order to avoid a grazing elephant!

A short walk from the main area, and behind the split-level pool, is a well-equipped spa featuring a wide selection of products and treatments from both the Thalgo and Africology ranges. While not for everybody, a half-hour massage at the end of a safari can be a very welcome treat.

Chobe Chilwero's 15 brick and thatch suites are light, luxurious and exceptionally spacious. Large glass doors look out onto the lawn to the front, and to a private walled-in garden at the back – complete with an outdoor shower and hammock. The suites are stylish and luxuriously appointed with air conditioning, double or twin beds, writing desk, dressing table, minibar fridge, plenty of storage space and a seating area. The en-suite bathroom is no less spacious, with a free-standing bathtub big enough for two, a shower, his and hers basins and a separate toilet.

Activities centre on 4WD game drives, as well as boat trips on the Chobe River, usually in the afternoon. There is the potential for some exceptional big-game and predator sightings in the Chobe riverfront area, particularly during the dry months between around July and October, when water sources in the interior of the park dwindle and wildlife is drawn to the permanent waters of the Chobe. We last visited in May 2014 – before Chobe’s peak game-viewing season – yet there were still animals to see and the park was quieter than later in the year. We enjoyed watching the elephant interaction at the edge of the water, and the birdlife was entrancing, with a variety of kingfishers, and carmine bee-eaters nesting on the banks, colouring otherwise brown trees with their vibrant red.

On previous visits to Chobe Chilwero in September the riverbanks were teeming with life. We lost count of the elephants, and there were buffalo lounging on the lush grass plains that are revealed as water levels fall. The birdlife was phenomenal, too – and some even seemed quite relaxed; we came within a metre of several African jacanas and a white-fronted bee-eater perched on a branch overhanging the water. Or perhaps we were lucky!

No matter what time of year you visit, don't expect to have sightings along the riverfront to yourself; this is a busy area, even more so than parks such as Moremi, in part because of its reasonably good infrastructure and proximity to Kasane and the Victoria Falls. In addition, do note that strict park rules mean that no night drives, walks or off-road driving are allowed and the roads along the riverfront, as well as the river itself can get quite crowded.

Because of this, we would normally suggest starting your Botswana safari in the Chobe area, before moving to the less busy parks and reserves. However, after a week or two in more remote areas, Chobe Chilwero could also be a good place to end a safari.

Chobe National Park may not be exclusive, but Chobe Chilwero is. This luxurious lodge offers high levels of service, excellent food and an array of facilities we'd expect in a good hotel. It may not suit the traveller looking for a more traditional safari experience, but we think it will appeal to those looking to avoid the larger hotels in Kasane, but still wanting to indulge themselves for a few days.

Location
Chobe National Park, Botswana
Ideal length of stay
Two or three nights, ideally at the start or end of your safari in Botswana, especially between July and October when game densities tend to be higher in this area.
Directions
It's roughly a ten-minute drive from Kasane International Airport to Chobe Chilwero.
Accessible by
Fly-and-Transfer

Usual board basis
Full Board & Activities
Food quality
The food at Chobe Chilwero during our most recent visit was excellent and difficult to fault.

Guests are woken up with a tray of tea or coffee. A varied breakfast buffet, available before heading out on the first activity of the day, includes cereals, fresh fruit, pastries, cold meats, cheeses, bread, yoghurt and dried fruit. There is also the option of a cooked breakfast, made to order.

Lunch – usually a choice of two or three plated dishes – is served between midday and 2pm, so there is a degree of flexibility. We thoroughly enjoyed the sweet potato and coconut soup, but could also have opted for smoked salmon, rocket and cucumber salad. Our main course options were pan-fried tuna and vegetables (which we chose and enjoyed), an impala steak, and a vegetarian quiche. To round it off there was a delicious berry and apricot tart, a cheeseboard or even ice cream!

Afternoon tea, served just before heading out on the afternoon activity, was a treat of fresh scones with cream and jam, fruit skewers, homemade chocolate finger biscuits, banana cake or mushroom tartlets.
This was accompanied by hot tea or coffee, iced tea or coffee, lemonade or a berry smoothie.

After pre-dinner drinks with canapes in the lounge, we sat down to dinner. Guests will usually have a choice of two or three dishes for each of the three courses. The evening we were at Chilwero the lodge put on a traditional barbecue with a large selection of meats accompanied by various salads, and a malva pudding with custard and fruit skewers for pudding.

Attitude towards children
Children of all ages are welcome, although families with children of five years and younger will need to book and pay for private activities, which will be at the discretion of management. Children aged 15 years and younger must share a suite with an adult.
Equipment
The suites are large enough for children to share comfortably without being cramped, and cots can be provided on request. Childminding is offered, but note that the minders are members of the housekeeping staff and are not qualified babysitters. Child-friendly menus are available and evening meals can be served earlier than normal mealtimes.

Children receive a backpack with a colouring book of animals, colouring pencils, water bottle, torch and children's binoculars. The lodge offers guided walks within the grounds of the lodge to collect pods, leaves and seeds, and to learn about animal identification.
Generally recommended for children
We think that Chobe Chilwero has a slightly more adult atmosphere, however children with a keen interest in the natural world are welcome here.
Notes
Dangerous wildlife wanders through the grounds and the pool is unfenced; children must be under the constant supervision of their parents.

Power supply notes
Chobe Chilwero is connected to the mains power supply from Kasane.
Communications
Telephone, fax and email are all available at Chobe Chilwero, which also has cellphone coverage as well as WiFi in the reception area. Guests are asked to respect the enjoyment of other guests and only to use cellphones in the privacy of their suites.
TV & radio
There is a television in the library.
Water supply
Mains
Water supply notes
All suites have plumbed hot and cold running water for showers, and flushing toilets. Each room is also provided with glasses and bottled drinking water that is replenished daily. We don’t recommend that travellers drink from the tap.

Childcare: Chobe Chilwero offers child minding on request. Please note that the minders are members of the housekeeping staff, and are not qualified babysitters.

Dangerous animals
High Risk
Security measures
There is a low electrified fence to deter elephants and a security guard at the main entrance to the grounds. Guests are escorted to and from their suites after dark. There is a telephone in each suite to call reception in case of need, and an air horn to raise the alarm in an emergency.
Fire safety
There are fire detectors and fire extinguishers at the suites and in the main areas, as well as fire hoses.

Disabled access
On Request
Laundry facilities
A full laundry service is included.
Money
There are safes in all the suites. No exchange facilities are offered.
Accepted payment on location
MasterCard and Visa credit cards are accepted; Diners and Amex are not. Cash payments may be made in the form of South African rand, GB sterling, US dollars, euros and Botswana pula.

This is a typical location for Chobe under Canvas, a small, semi-permanent camp in the Chobe Riverfront area that offers good value for money and high standards of care.

Located in one of our favorite areas of Chobe National Park, Chobe Elephant Camp is a simple but well-appointed camp with a strong bush feel.