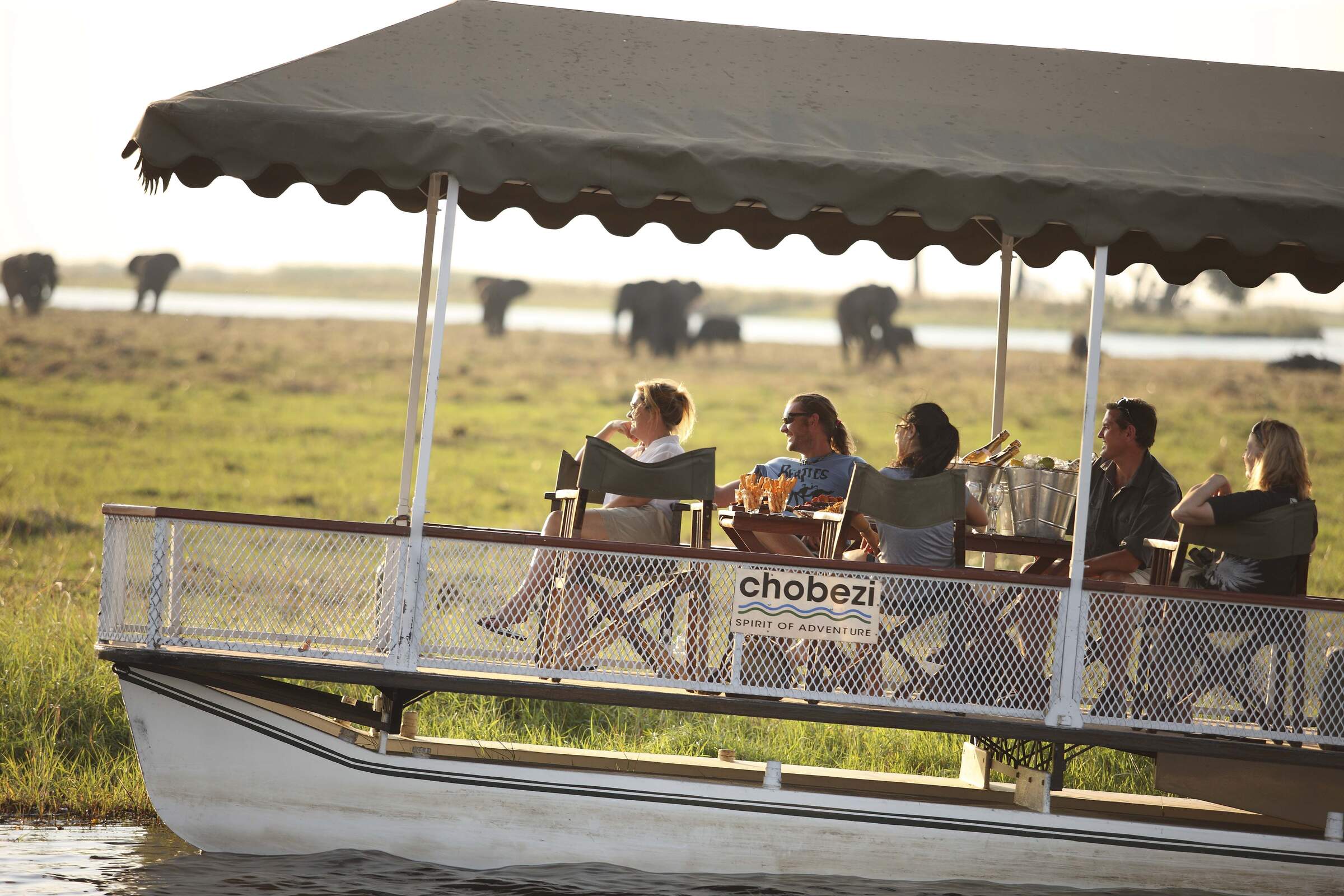 Reviews of Chobe Under Canvas

19 independent comments and wildlife information from our travellers who have visited Chobe Under Canvas and kindly agreed to share their thoughts. They do not necessarily represent the views of Expert Africa

2 nights Arrived 5 Jun 2016
"The staff were very welcoming and attentive. The food was some of the best of the trip. Simple but flavoursome.

The shower was however hardly a trickle. A few more holes might help.

"What an amazing experience!"

2 nights Arrived 3 Sep 2015
"I can't speak highly enough of Chobe Under Canvas! The tents are comfortable (even with animals wandering past at night!) and the food was great - hard to believe it was cooked in a bush kitchen! The chef even prepared a birthday cake for me, which was a really lovely gesture.

The best part our stay at Chobe Under Canvas was our guide, Max. Max was knowledgeable, fun and passionate about wildlife. Highlights included a rally car style race to find a leopard, spending a morning with a group of lions, being surrounded by hundreds of elephants and cruising the Zambezi River alongside pods of hippos.

1 night Arrived 9 Jul 2015
"We originally were trying to book three nights at Savute Under Canvas, but could only secure two nights. Accordingly we filled the remaining night at the sister camp, Chobe Under Canvas. I regret only being able to spend one night as the game viewing and guiding were excellent.

Reading the reviews on Chobe National Park, I expected the northern Chobe River area to be busy. I had visions of ten land cruisers jostling to get a view of a lion sighting. While we did experience more traffic, including several private vehicles, the area was not nearly as crowded as I had feared. Furthermore, the additional activity did not impact the game viewing. We particularly enjoyed observing a couple of male lions challenging for a pride, the social interactions of chacma baboons, migrating elephants at the river, as well as herds of tsessebe antelope and majestic sable antelope at a watering hole.

The mobile camps have an advantage over the lodges located outside of the park with respect to time spent observing the wildlife. Chobe National Park regulations require all vehicles to be out of the park or back at camp by a designated time. This meant that all the vehicles operated by lodges based outside of the park started pulling out a good 30 minutes before us. This was especially appreciated when watching the lions, as they start becoming more active later in the evening.

The &Beyond mobile camps are very comfortable and the staff are extremely accommodating. I was very impressed with the ability of the staff to move the camp every five days, or even more frequently as bookings and park regulations mandate. The meals, served under an open sided tent, were fresh and delicious - quite a feat given the remote locations and the mobile nature of the camp." See all these reviews: 9n in Zambia; 7n in Tanzania; 6n in Botswana; 3n in Zanzibar; 2n in South Africa
Experience Report
Overall Rating:
Excellent
Location:
Excellent
Service:
Excellent
Activities:
Excellent
Rooms:
Excellent
Food:
Excellent
Mrs M
Preston

3 nights Arrived 4 Jun 2014
"When I telephoned expert Africa it was to book the Chobe Game Lodge, following our conversation Megan suggested ‘Chobe under Canvas’ and I am so glad that she did. This was the highlight of our holiday in Botswana and Namibia.
We were in one of the five tents, each tent has a basic bathroom. You just ask and hot water is provided for your bucket shower. The beds were extremely comfortable, and warm despite the cold June weather. The food was good as was the open bar, but best of all was the company of the camp staff but especially our guides, Dishu and Chief. They kept us entertained from dawn to dusk and made our stay in Chobe unforgettable. Thank you to all the staff at &Beyond for a wonderful 3 days." See all these reviews: 6n in Botswana
Experience Report
Overall Rating:
Excellent
Location:
Excellent
Service:
Excellent
Activities:
Excellent
Rooms:
Excellent
Food:
Excellent
Facilities:
Excellent
Scott & Sue
USA

"Rustic setting with tons of elephants!"

3 nights Arrived 21 Jun 2011
"We had a wonderful time at this camp. The staff were very welcoming and friendly. The food was great. We saw a great many animals including lions and a leopard.We were there in June which was a good time of year to see game. I tink that staying in the park was winner!" See all these reviews: 8n in Botswana; 4n in Seychelles; 2n in Zimbabwe
Experience Report
Overall Rating:
Excellent
Location:
Excellent
Service:
Excellent
Activities:
Excellent
Rooms:
Excellent
Food:
Excellent
Facilities:
Excellent
Mr & Mrs R
Kent

3 nights Arrived 5 Jul 2010
"Absolute luxury for a tent! A fantastic experience. Suggest packing torches as what electricity thre is is so limited we were in darkness in the tent much of the time in the evenings and early morning.

The staff were great and the guide superb. There are no activities at the camp itself but the drives and boat trip were excellent." See all these reviews: 5n in Botswana; 3n in Zambia
Experience Report
Overall Rating:
Excellent
Location:
Excellent
Service:
Excellent
Activities:
Excellent
Rooms:
Excellent
Food:
Good
Facilities:
Good
Showing 11-19 of 19
12
Previous
100%
19 reviews of Chobe Under Canvas by travellers since August 2007
Overall rating by our travellers
19
0
0
0
0
Filter by month

Located in one of our favorite areas of Chobe National Park, Chobe Elephant Camp is a simple but well-appointed camp with a strong bush feel.