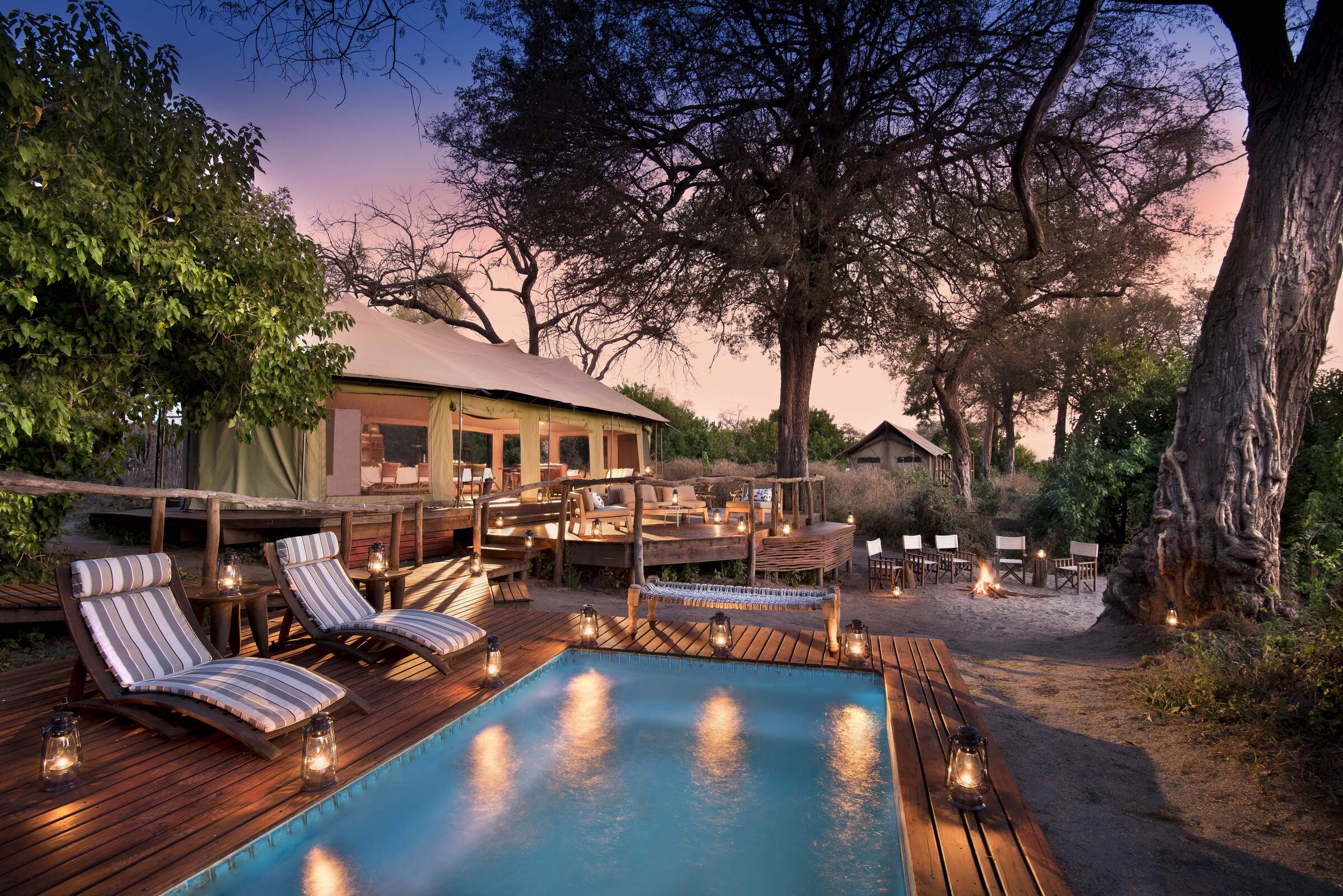 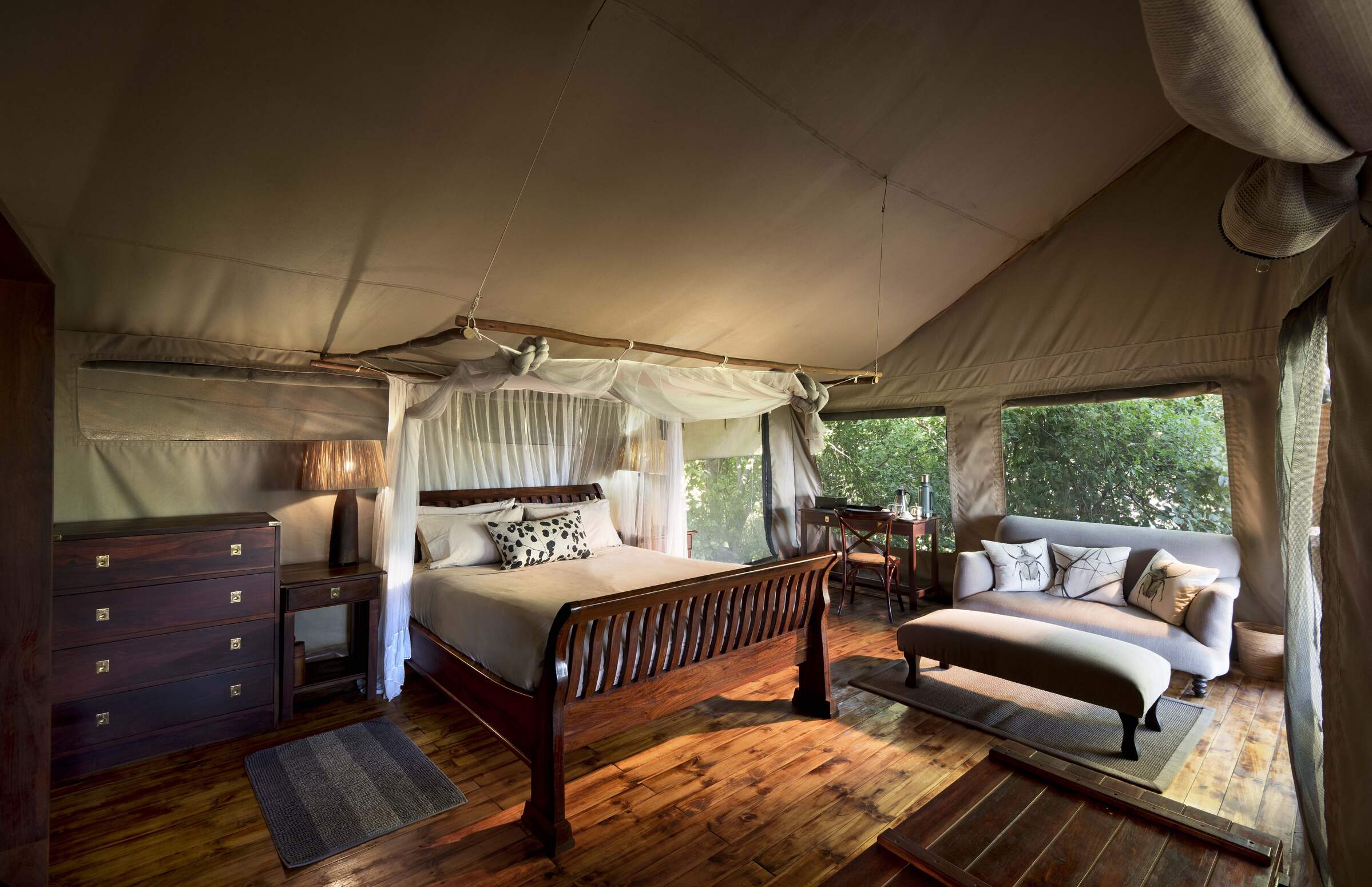 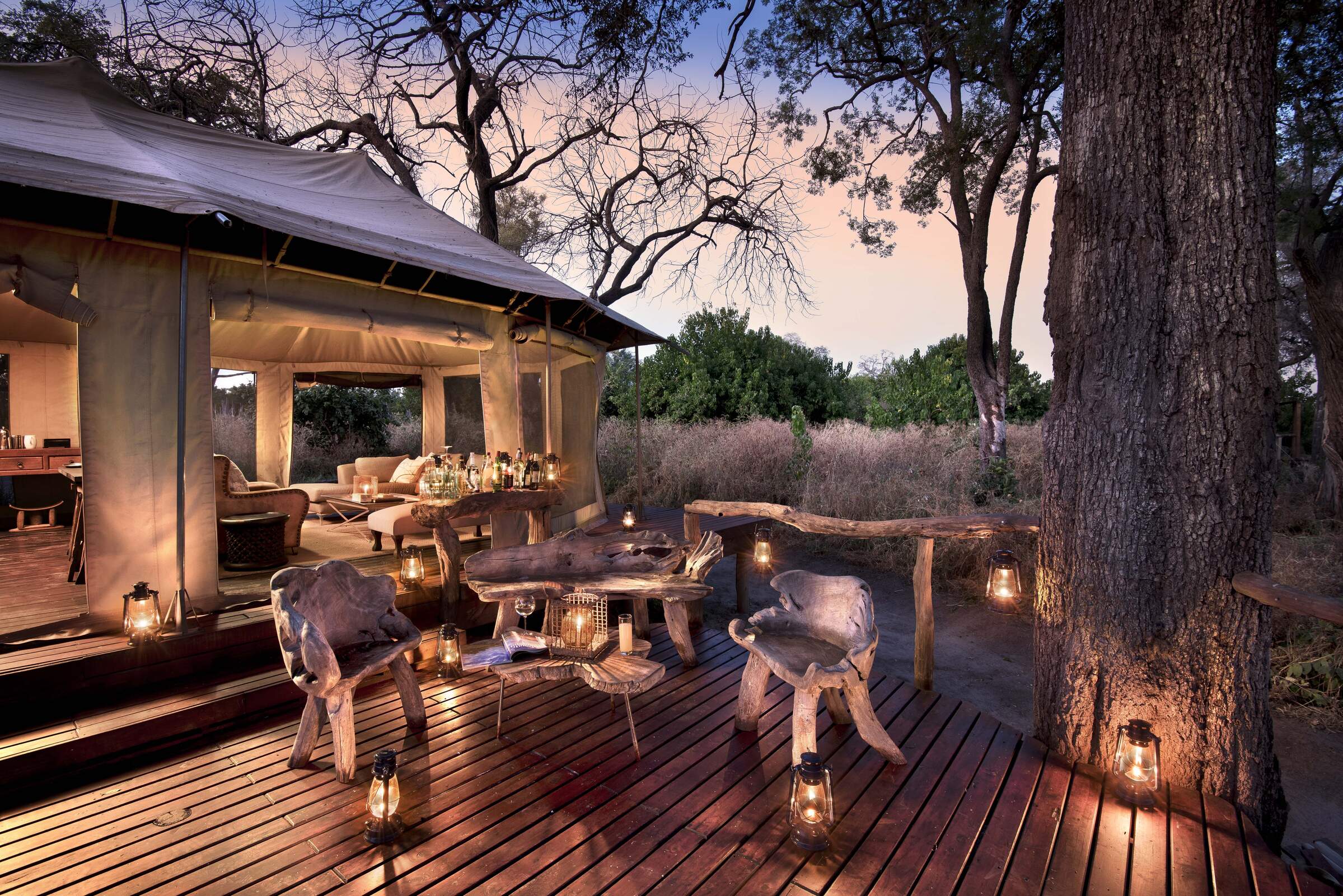 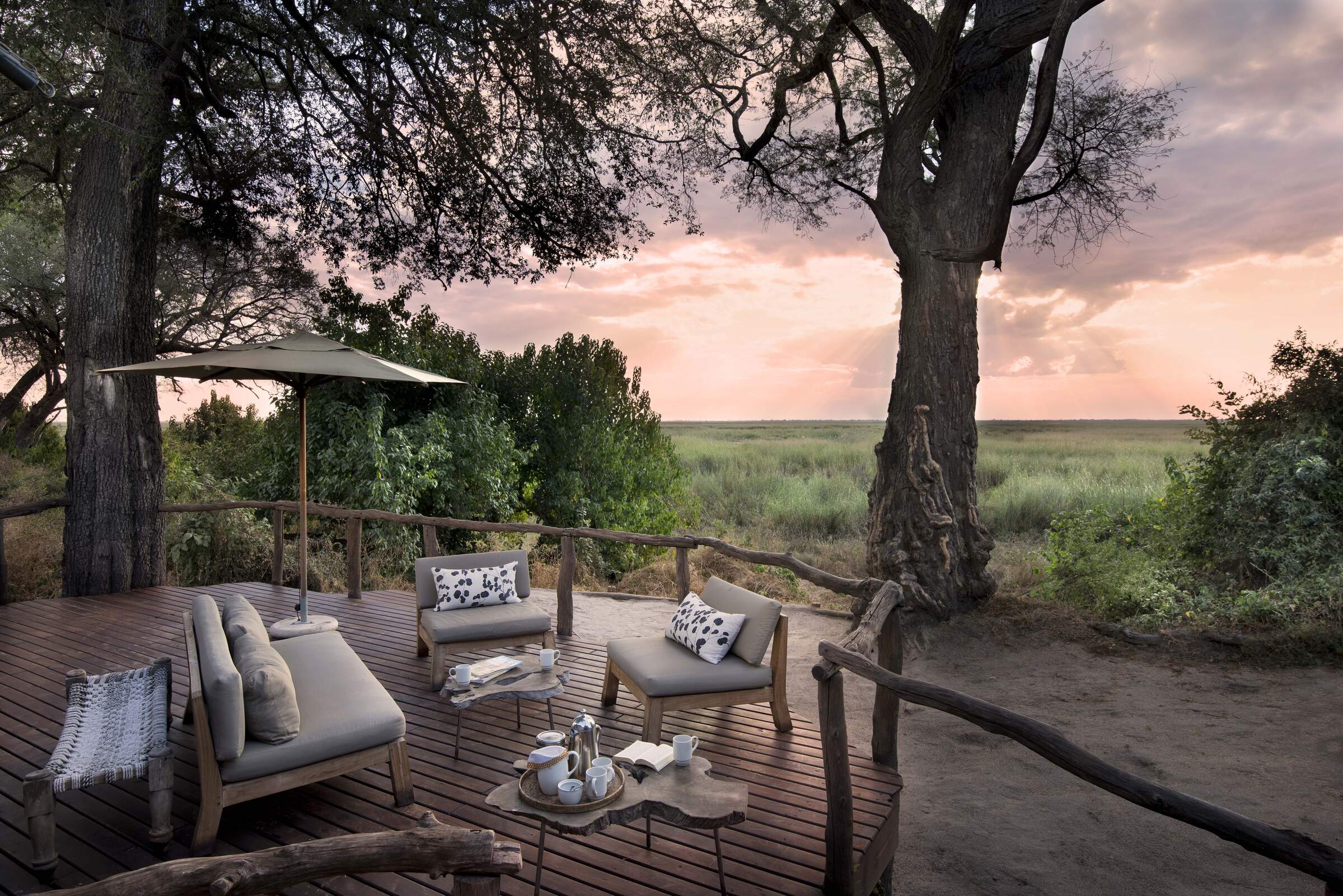 5 independent comments and wildlife information from our travellers who have visited Linyanti Ebony and kindly agreed to share their thoughts. They do not necessarily represent the views of Expert Africa

Showing 1-5 of 5
Duration
Ms B.
Cambridge

3 nights Arrived 16 Aug 2019
"We had originally planned to go to Linyanti Bush Camp, but due to some scheduling difficulties later on in our trip, we ended up going to Linyanti Ebony. And we are so happy that we did.

The camp itself is lovely: small, very well appointed, and nicely situated on what would have been a river and marsh had it not been so dry. The camp is managed by Evelyn who tended to every detail in a timely, accurate and gracious manner. She had originally trained as a chef but was moved to the “front office” when management saw how good she was with operations, and what a good choice that was.

Our guide, Dutch, was fantastic. He’s a young man who has an interesting combination of traits: playfulness with a great sense of humor along with an expansive knowledge of flora and fauna, including birds, and a deep sense of responsibility for his clients. We had many wonderful sightings including the elusive sable antelope and lots of great interactions with elephants." See all these reviews: 15n in Botswana
Experience Report
Overall Rating:
Excellent
Location:
Excellent
Service:
Excellent
Activities:
Excellent
Rooms:
Excellent
Food:
Excellent
Facilities:
Excellent
Sightings Report

3 nights Arrived 30 Aug 2018
"Action and Cassie were spectacular! This lodge was the highlight of our trip.

I really appreciated how personable the staff were. They used our names while we were there, which made us feel very welcome.

On our trip from the airstrip to the lodge we saw hippos, a leopard, zebra, giraffe, water buck, baboons, and elephants. It was a magical experience. Action's excitement and passion for the animals was infectious and made the trip wonderful." See all these reviews: 6n in Botswana; 2n in Zimbabwe
Experience Report
Overall Rating:
Excellent
Location:
Excellent
Service:
Excellent
Activities:
Excellent
Rooms:
Excellent
Food:
Excellent
Facilities:
Excellent
Sightings Report

2 nights Arrived 25 Oct 2015
"camp nice balance between traditional and comfort. wena was a great manager - we were made to feel at home.

3 nights Arrived 8 Sep 2014
"Staff very hospitable and welcoming. Food is good at lunch and dinner . Breakfast on first and second day was continental round a fire , good but not on the level of other meals.

Guide was very good and we saw plenty of game.

Helicopter ride was an added bonus and we really enjoyed it.
The ride from the airstrip is long and a bit rough after the long journey we has from South America." See all these reviews: 12n in Botswana; 1n in Zambia
Experience Report
Overall Rating:
Excellent
Location:
Good
Service:
Excellent
Activities:
Excellent
Rooms:
Good
Food:
Good
Facilities:
Good
Mr & Mrs L
Chile

3 nights Arrived 8 Sep 2014
"This was our first camp, so we were knew that this camp would set the standard for all the subsequent camp experiences.

I was impressed with training that the staff imparted to us. Such bravery to stand in front of complete strangers and attend us with a shy and graceful attitude. We needed to adapt to the unusual hours and the rhythm of the food service helped immensely.

Safety information was imparted to us in a manner that encouraged us to obey at every moment especially at night and in the vehicle.

The setting is delightful and an entire array of wild animals during our stay proved to us that we were really in Africa. It was hard to say good-bye and set off to the next camp. We wish all the staff the best for may seasons to come." See all these reviews: 12n in Botswana; 1n in Zambia
Experience Report
Overall Rating:
Excellent
Location:
Excellent
Service:
Excellent
Activities:
Excellent
Rooms:
Excellent
Food:
Excellent
Facilities:
Excellent
Showing 1-5 of 5
100%
5 reviews of Linyanti Ebony by travellers since August 2007
Overall rating by our travellers
5
0
0
0
0
Filter by month

Other lodges in Kwando-Linyanti area

Within the vast Kwando Reserve, renowned for its wild dogs, Lagoon Camp offers excellent game viewing that focuses on predators.

With enthusiastic guides and trackers, Lebala – in a vast private reserve – is a particularly good camp for seeking wild dogs..

In an attractive area that is particularly rich in game between June and November, the luxurious Selinda Camp caters particularly well for photographers.

DumaTau, in the private Linyanti Reserve, offers game drives, seasonal boat cruises and walks. Wildlife safaris here are quite seasonal, and are at their best during the height of the dry season, between June and October.

For years the Savuti Channel ran dry, but it's now flowing again and this newly refurbished, 7-room lodge has pride of place to witness the spectacle.

Zarafa is an exclusive camp overlooking the scenic Zibadianja Lagoon within the Selinda Reserve, a particularly game-rich area between June and early November.

King’s Pool is a top-end luxury safari camp with a price tag to match; the game viewing can be very good during the dry season.

The Selinda Adventure Trail offers a novel and tranquil way to travel through part of Botswana's pristine wilderness whilst staying in comfortable fly-camps and led by a knowledgeable guide.

A simple and remote satellite camp, Little Motswiri focuses on non-motorised activities, particularly walking and horseriding. It enables guests to explore 120,000 acres of private wilderness around the Selinda Spillway.

Footsteps Across the Linyanti is the only true mobile walking safari we know of in Botswana. Explore a wild and remote wilderness on foot with a knowledgeable guide.