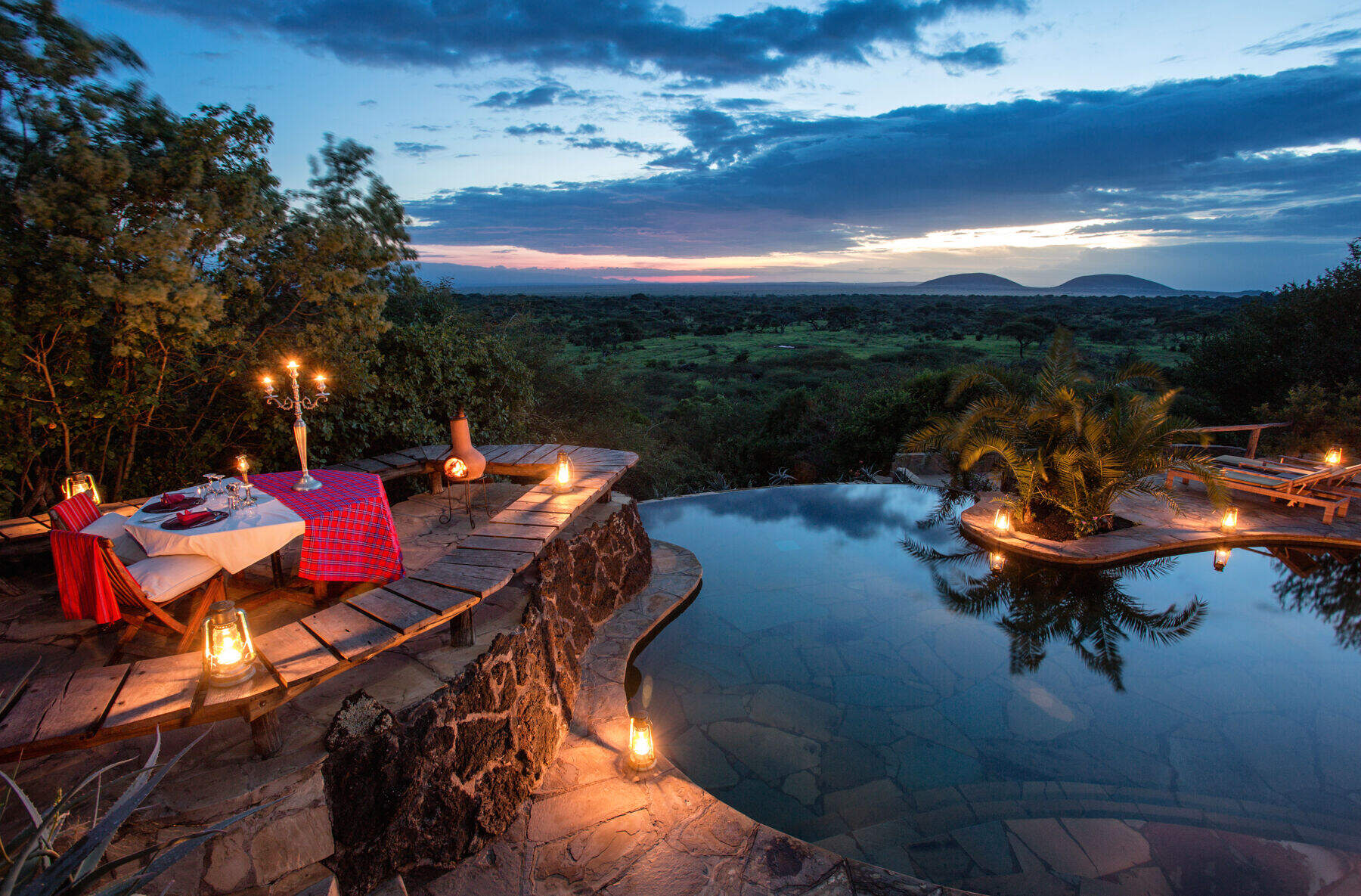 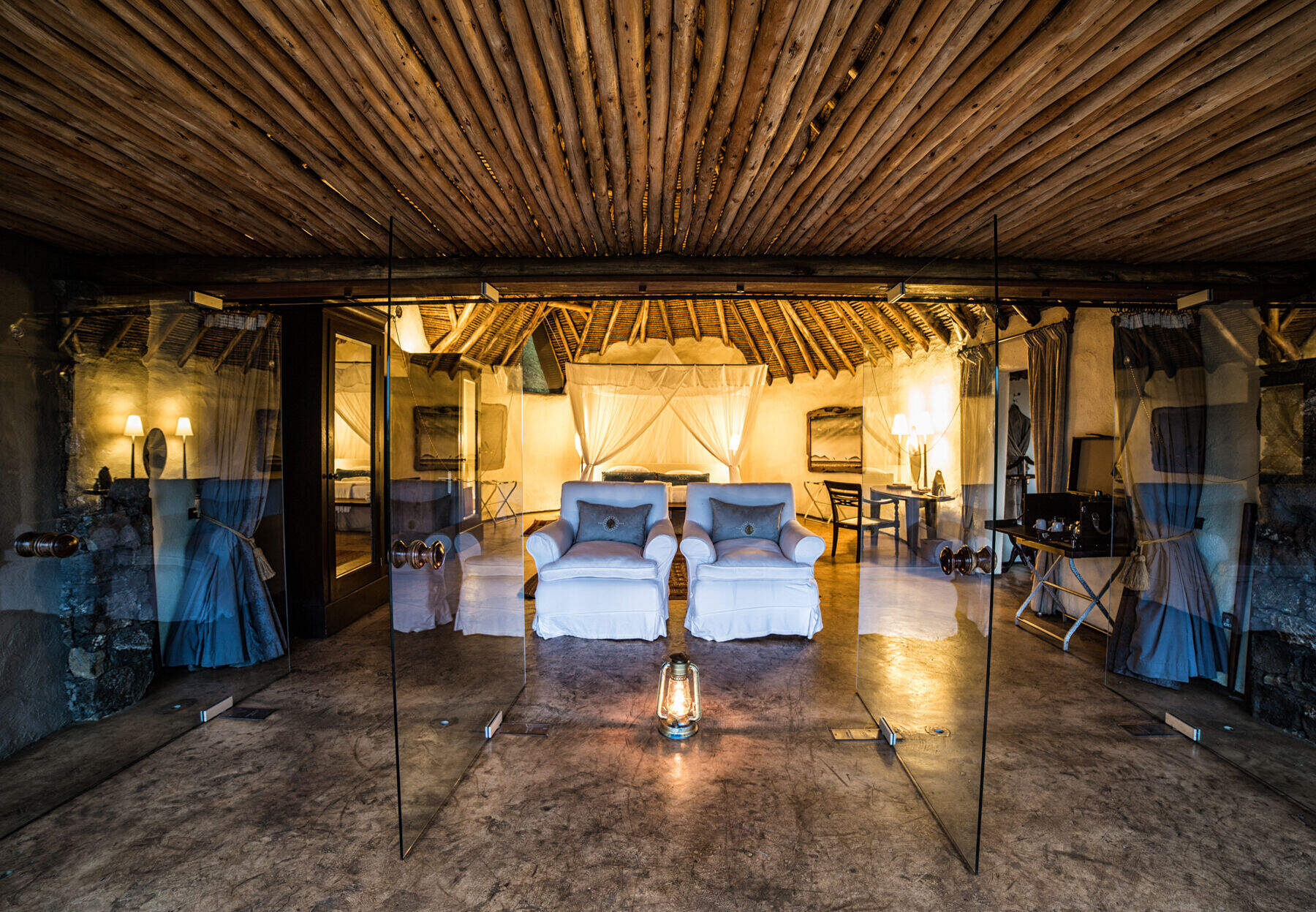 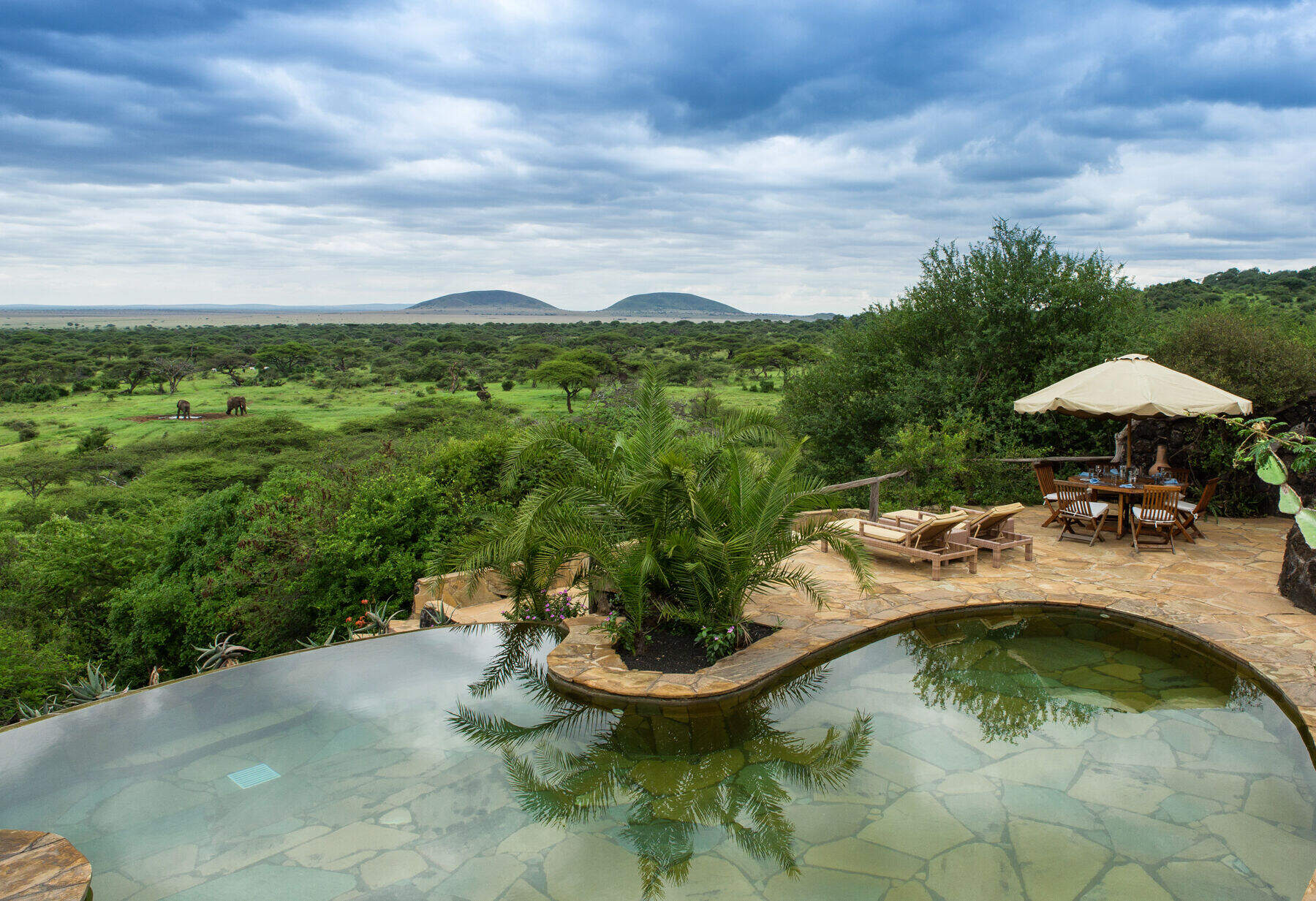 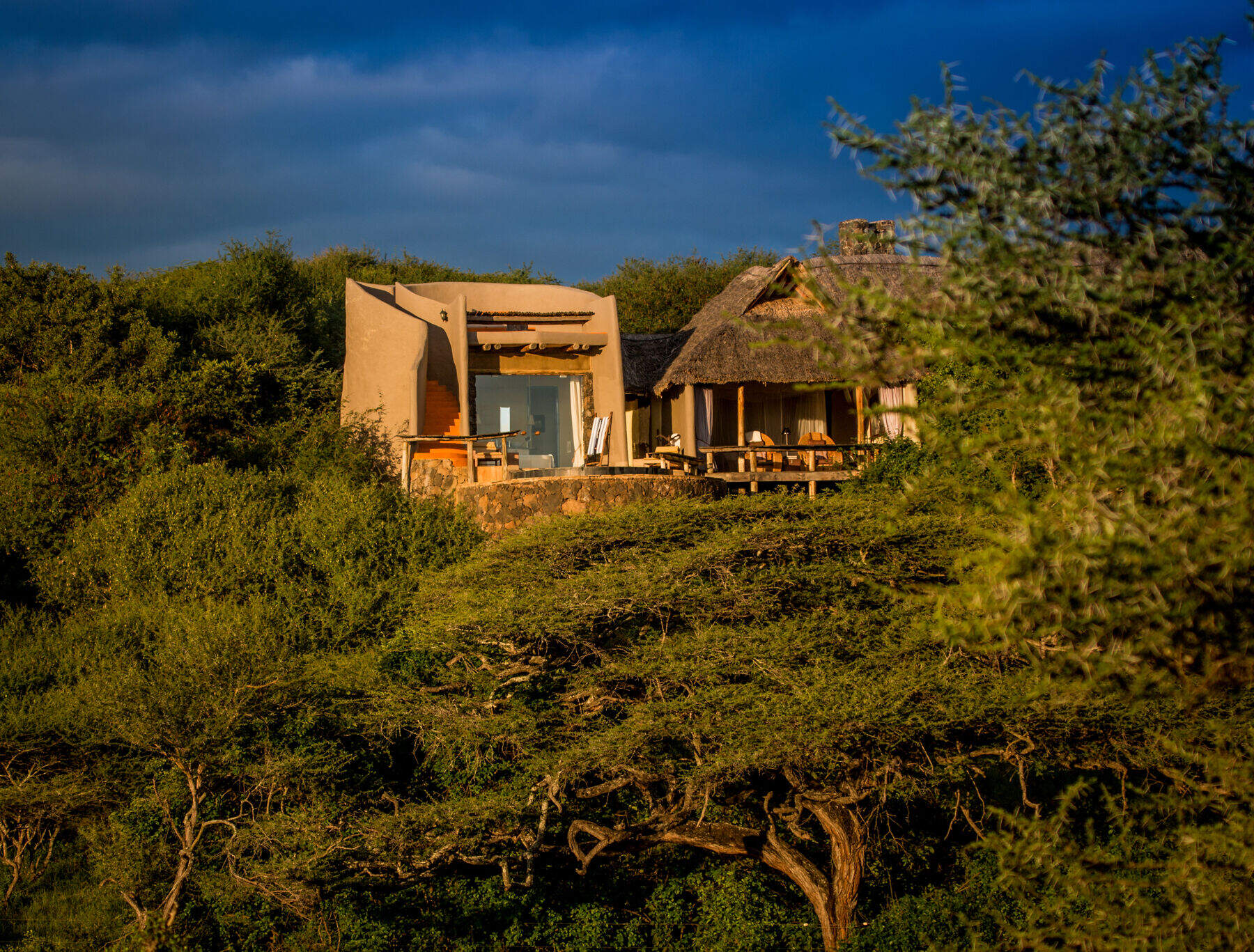 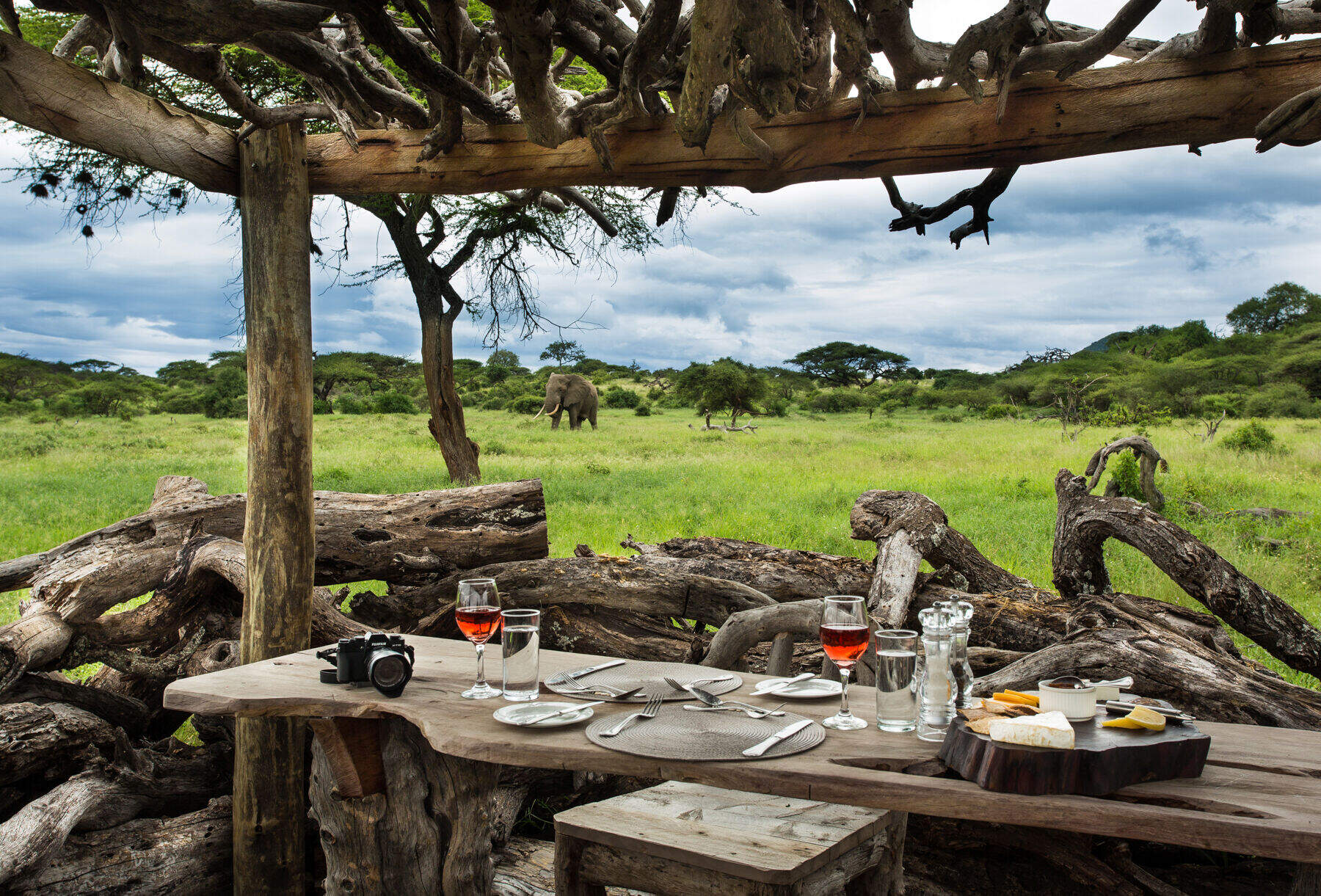 Ol Donyo Lodge (formerly known as Ol Donyo Wuas), is located on the south-western flank of the volcanic Chyulu ...

... Hills, on the 1,000km2 Mbirikani Group Ranch, facing Kilimanjaro across the savannah. A safari lodge originally built in 1987 by bush pilot and conservationist Richard Bonham, it was transformed in 2008 into a designer safari base for horseriding, bush walking and game drives.

Driving from the airstrip, you can see the lodge up on the hillside for some time before the final winding track through dry woodland brings you to the central guest area. This is focused on a magnificent lounge and terrace, with a sweeping panorama, and a baronial dining room. Across the drive is a small office-cum-internet room, while the breakfast terrace and swimming pool are a few steps down from the lounge terrace, with impressive views across the bush and down to three waterholes.

The ten very spacious suites at Ol Donyo Lodge are situated in six separate ‘villas’. Each suite has its own lounge and veranda, indoor and outdoor showers, a bath, a flush loo and twin washbasins. From the veranda, a stone staircase leads up to a rooftop sundowner terrace-cum-sleeping platform, complete with a mosquito-net-covered four poster ‘star bed’ (though note that you need to give some notice if you intend to sleep up there).

The six villas have three different configurations:
The furnishings at Ol Donyo Lodge are a triumph of stylish-rustic, with generously over-sized mosquito nets, swing doors of heavy glass, stand-alone baths and washbasins, rainfall showers, dark wood chairs and tables, wicker armchairs and cushions, tall bedside lights, and mirrors hanging on cables from the ceiling. The curved walls are decorated with large prints of the ethnic photo portraits of Carol Beckwith and Angela Fisher. And the grounds around each villa are the natural black, volcanic gravel of the region, which contrasts so strikingly with the wood and thatch and pale cream-, grey-, or orange-coloured walls of the villas’ architecture, and looks particularly striking during the growing season, with planted and naturally growing native shrubs, succulents and other plants bursting forth.

Everything about Ol Donyo Lodge is a delight to the eye, and the private plunge pools, each with its own infinite view across the plains, are a wonderfully hedonistic indulgence. Ensuring the privacy of these and the roof tops is a feat of design that Ol Donyo has pulled off very impressively.

A wealth of activities is available at Ol Donyo Lodge and included in the rates, and the list seems to get longer each year. The latest is mountain-biking, accompanied by a pedalling armed guard, allowing you to get close to plains grazers such as zebra, wildebeest and giraffe. Bush walks – either down the hill towards the plains, or up into the green hills, and again always accompanied by at least one armed guard – are also popular. There’s a cleverly constructed open-air hide – the ‘log-jam’ – below the lodge where you can often watch elephants and other big game from close quarters as they drink at one of Ol Donyo’s waterholes. Game drives, both during the day and after dark, are also popular. Keen photographers may want to pay extra for exclusive use of a vehicle and guide, which includes the loan of a Canon EOS 50D camera with 17–85mm and 100–400mm zoom lenses.

However, Ol Donyo Lodge’s stand-out activity is game viewing on horseback, with a stable of 20 horses, suitable for various abilities. When you discover you’re not quite as used to being on a horse for several hours as you thought, the lodge can offer massages with a trained masseuse in your room (at extra cost). If you're a more experienced rider, the lodge now offers a flycamp option on horseback.

Ol Donyo does important work with the Maasailand Preservation Trust. Set up by Richard Bonham, the trust, now part of the Big Life Foundation, has helped to engage the Maasai community with their wildlife heritage and to see wild animals as an economic asset, while also helping them to cope with wildlife-human conflict. It has also been active against poaching, not just of elephants, but critically of black rhino. The last wild-roaming black rhino in Kenya hide in the dense thickets of the Chyulu Hills, closely guarded by rangers supported in part by funds from visitors to the lodge.

It’s a pity, then, that Ol Donyo Lodge’s own environmental credentials fall at the first hurdle: all its water requirements – some 20,000 litres every day – are hauled up daily from the highway in a huge bowser. We would hope that they would investigate the option of capturing water from the heavy rains that fall on the lodge several times a year.

The spectacularly chic Ol Donyo Lodge is one of Kenya’s most outstanding bush lodges. We love the magnificent views, the real flair in the graceful, earthy design and the beauty and fascination of the environment. The lodge’s conservation work and their engagement with the local Maasai seem great – though we hope that they solve their water supply problem, as it is a fly in the otherwise excellent ointment.

Location
Amboseli and the Chyulu Hills, Kenya
Ideal length of stay
3 nights; longer for riders
Directions
A good scheduled local airline flies to Ol Donyo airstrip (about an hour, depending on route), where guests are met by a vehicle from the lodge for the 30-minute transfer (longer if you pause to watch wildlife).
Accessible by
Fly-and-Transfer

Usual board basis
Full Board & Activities
Food quality
Guests at Ol Donyo Lodge may choose to eat separately or together.

Lunch, a light, three-course buffet, is served 1.00–2:30pm, and usually includes a variety of dishes, such as spaghetti carbonara, mixed pizzas, Waldorf, green and Russian beetroot salads, and a cheeseboard, with ice cream and tuiles biscuits.

Tea and cakes are available in the lounge from 4.00pm.

Dinner is usually served from 8.00pm and there is always a vegetarian option. The menu when we stayed started with a Kenyan classic – feta and coriander samosas with sweet chili sauce – and was followed by stuffed chicken breasts with sundried tomatoes, turned potatoes, french beans and carrots. We could also have tucked into the pumpkin risotto or had grilled pork fillets with boulangère potatoes, caramelised pears and mangetouts with onion sauce. Pud was a tangy and frothy lemon meringue pie. The coffee was served with truffles on the terrace, listening to the night sounds. Not a bad way to end a day in Kenya.

Honeymoons
Ol Donyo offers an exclusive, luxurious and romantic honeymoon safari in Kenya. Six rooms have their own plunge pool, and a roof deck where you can spend a night sleeping under the stars. It’s a very stylish lodge, and clearly designed with your privacy and comfort in mind.
See ideas for Honeymoons
Riding holidays
Ol Donyo Lodge is probably the best place for riding holidays in Kenya, and is a working stud. Its 20 horses offer superb riding for almost all aboility levels. Discover this fascinating landscape on horseback, with the impressive Kilimanjaro as your backdrop.
See ideas for Riding holidays
Luxury
The very stylish and roomy suites at Ol Donyo Lodge offer plenty of luxurious amenities and unusual features, including private plunge pools and roof terraces for sunbathing or spending a night under stars. The lodge offers a wide range of activities and has superb riding stables.
See ideas for Luxury

Attitude towards children
Ol Donyo Lodge has a positive attitude to guests bringing children.
Property’s age restrictions
None
Special activities & services
Cycling and bush walks are options only for children over 10.
Riding in the bush is usually only available for experienced riders over 12. Novice riders and all under-12s must demonstrate their ability around the arena at the stables before being allowed to accompany other riders.
Equipment
None
Generally recommended for children
We do not generally recommend Ol Donyo Lodge for younger children. Most guests at Ol Donyo are adults and the atmosphere is quite grown-up and a little more formal than at most safari lodges. There are no obvious areas to let off steam and there are quite a lot of potential fall hazards, with drop-offs. However, older, outdoors-loving children who are keen naturalists will love it here and can participate in most of the activities.

Communications
There are no room phones. Cellphone reception (both Safaricom and Airtel) is usually available around the lodge, but can be patchy and intermittent. There is unlimited, free guest WiFi and a laptop for guests’ use is available near the main lounge.
TV & radio
None, though for major events, such as the World Cup, guests sometimes visit the staff lounge.

Social development in the Mbirikani Community

Located on the private 275,000-acre Mbirikani Group Ranch in south-eastern Kenya, Ol Donyo Lodge can accommodate up to 16 guests, making it a suitable retreat for families. Full lease fees as well as a per person conservancy fee go directly to a community of 4,000 Maasai based on the promise that the lodge will ensure the conservation of the ranch and the wild animals which call it home.

In complying with the agreement, Ol Donyo Lodge has partnered up with ‘The Great Plains Conservation – Big Life Foundation’ to design conservation and community development strategies.

One of the first projects they launched has facilitated the establishment of two primary schools and one boarding school on Mbirikani Group Ranch, providing education to over 300 students per year. Additionally, a note-worthy number of classrooms was constructed while facilities for existing schools were renovated, as well as 20 government-certified teachers’ salaries being sponsored annually. Guests are invited to contribute to the project by packing school supplies, reading materials and toys that can be donated during a visit at the local schools.

Disabled access
Not Possible
Laundry facilities
Full Laundry Service - Included
Money
Ol Donyo Lodge doesn’t offer foreign currency exchange. There are safes in every room and larger valuables can be stored safely with the management.
Accepted payment on location
Ol Donyo Lodge accepts cash for extra payments in US dollars, euros, pounds sterling and Kenyan shillings. Visa and MasterCard are the only credit cards accepted, both with a 5% surcharge.

Tortilis is a finely situated and well built safari camp located in the private Kitirua Consarvancy just outside Amboseli National Park and with wonderful views of Kilimanjaro.

Campi ya Kanzi is a very well integrated, eco-friendly bush lodge and tented camp on the slopes of the Chyulu Hills in its own, 1000-square-kilometre Maasai conservancy.