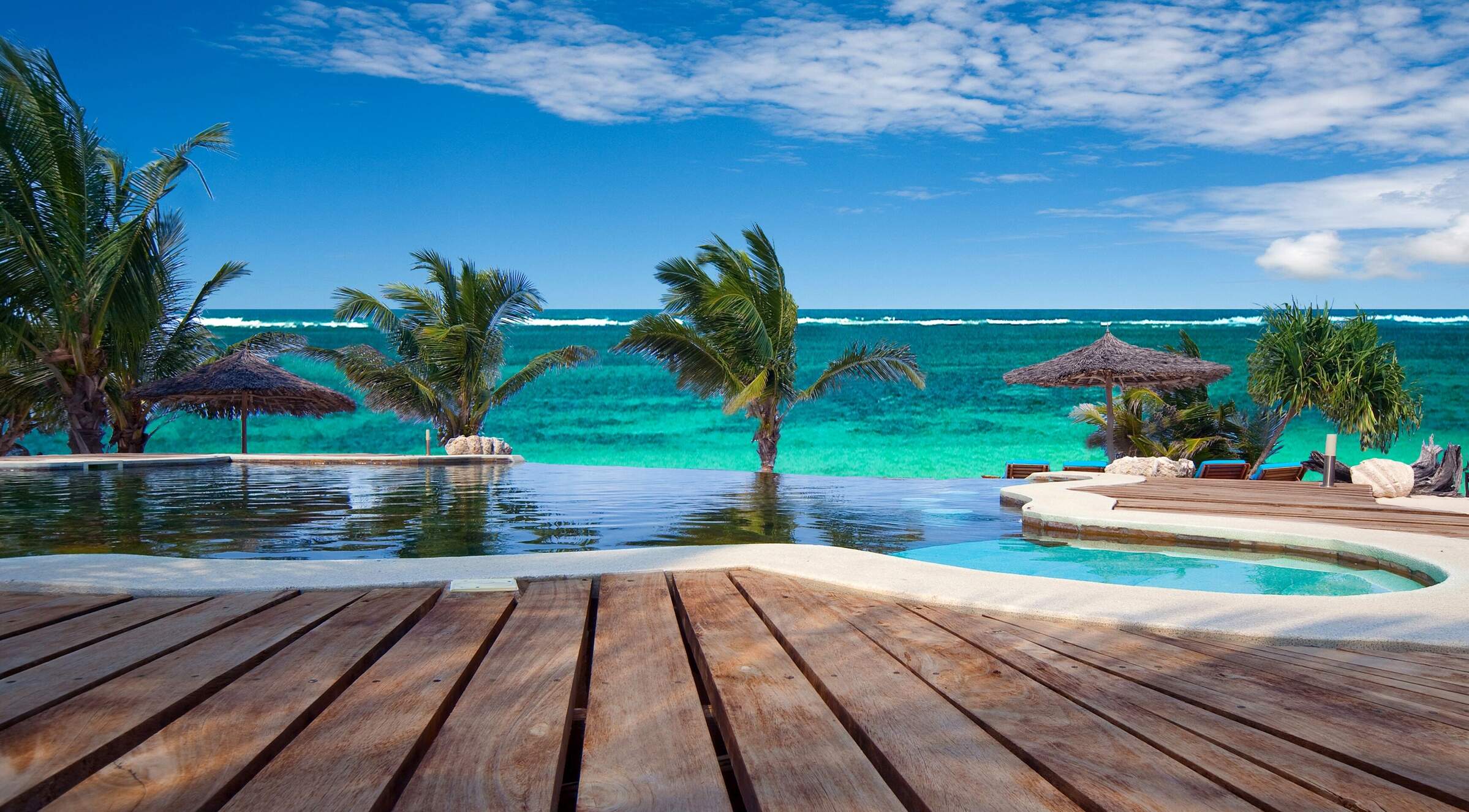 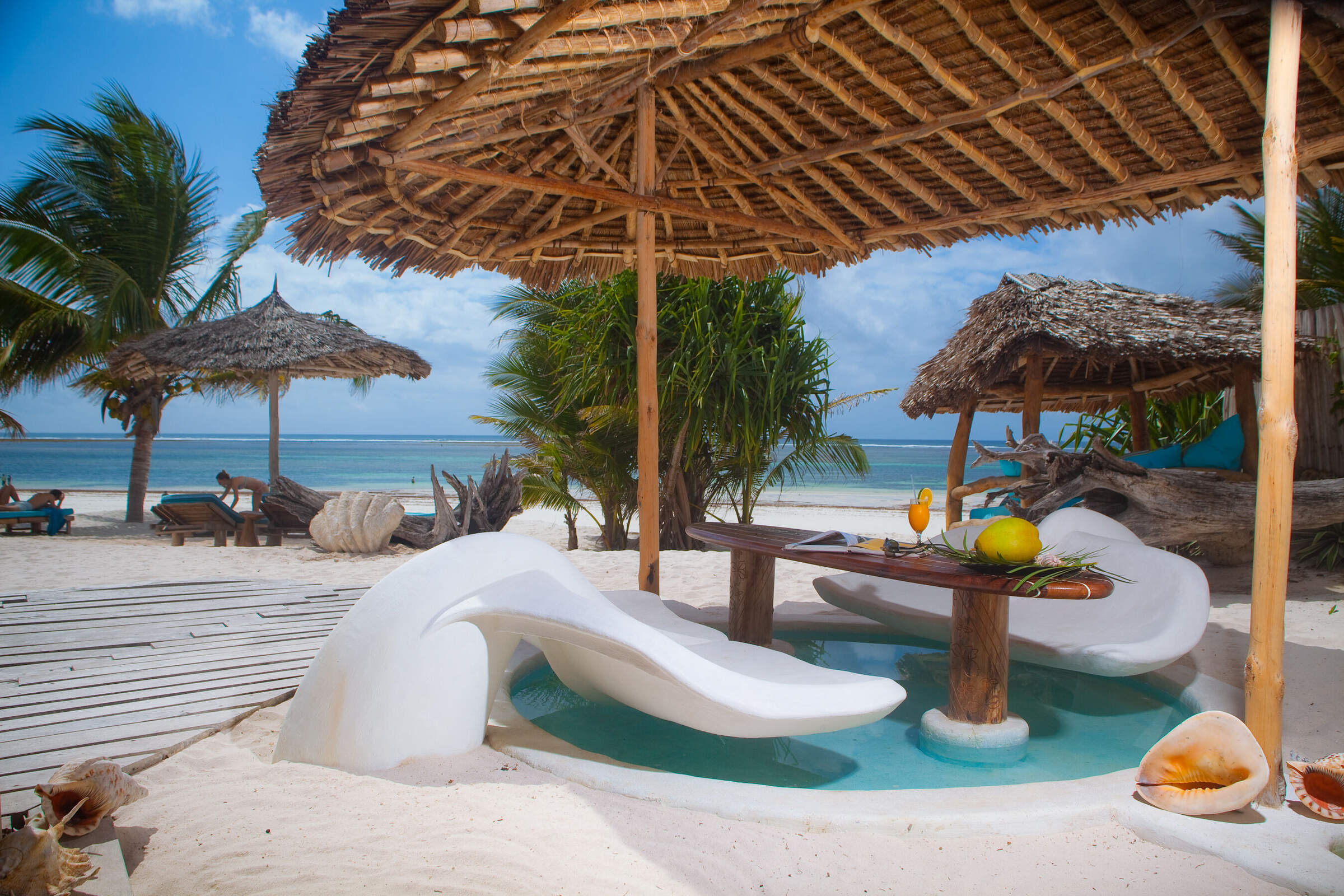 Water Lovers is a smaller, mid-range beach hotel close to the middle of Diani Beach, built and opened in ...

... 2008 and set on a lovely site shaded by baobabs, coconut palms and flamboyant.

The hotel is reached down a short unmade-up road off the main Diani Beach road, and entered through a gate leading onto the plot just behind the beach itself. A small shop, reception office and restaurant/dining area are the common parts of the hotel, together with a freeform swimming pool and the gardens.

Water Lovers' rooms comprise eight suites (which can be single, double, twin or triple), a Villa that sleeps a maximum of eight guests and a Penthouse that also sleeps eight. The eight suites, relatively modest in size and each name after an animal, are located in four buildings, with a ground-floor and a first-floor suite in each.

We had a look around Rhino suite, which had a large four-poster double bed and a single bed to one side. Good toiletries are provided in the bathroom, which was equipped with a hot shower (though you often won’t need hot water), simple basin, loo and bidet, beach towels and a beach bag. In the cupboard, there’s an umbrella, a hairdryer and a very small digital safe. Sun cream and after sun are provided free of charge. Each room has a mobile/cellphone, fitted with a Kenyan SIM card, allowing you to make local calls for reservations, taxis or excursions. The rooms also have a speaker system to enable music to be played from your own phone.

While staying at Water Lovers, your activities include the usual pool- and beach-side amusements, and the hotel provides kayaks that can be borrowed free of charge and enable you to get out to the offshore sandbank at low tide. You can also rent the services of local boatmen with their ngalawa outrigger canoes, who typically charge around Ksh1000 (around US$10) to go out to the reef when the tide is high enough – typically several hours twice a day.

Water Lovers has a loyal fanbase, and while many visitors are Italian, it has an international clientele that have supported it since it opened, and through the changing fortunes of the Diani Beach scene. While we haven’t yet had a chance to stay, our visits have always left us with the strong impression of much loved and well managed beach property which is well located for trips out to do shopping, have a meal or go on excursions further afield.

Usual board basis
Half Board
Food quality
We haven't had a chance to sample the food at Water Lovers, but it's reasonably priced and we would guess it would be well prepared, with a strongly Italian slant. A limited amount of bottled drinking water is provided (usually 0.75cl per guest per day, around a pint) and you're expected buy your own after that.

Attitude towards children
Children of all ages are welcome.
Property’s age restrictions
None.
Equipment
Baby cots, mosquito nets and high chairs are avaialble.
Notes
Babysitting can be done by ladies from housekeeping, and there's also a children's menu.

Power supply notes
There is a generator for the occasional power cut and the hot water in the rooms is solar-heated. Every room has a power-saving switch (ie one switch to turn on/off everything).
Communications
There is free WiFi throughout the property and good cellphone coverage.
TV & radio
TV room in the Penthouse. Forty Thieves Beach Bar is 5 minutes' walk away.
Water supply
Mains

Malarial protection recommended
Yes
Medical care
The Diani Beach hospital is a 5-minute drive away and one of the best medical facilities in Kenya.
Dangerous animals
Low Risk
Security measures
There is no serious problem here with beach boys, but the hotel does have security round the clock.
Fire safety
There are fire extinguishers throughout the property. In addition they have a fire hose and conduct fire-training.

Disabled access
On Request
Laundry facilities
A laundry service is available, at a cost equivalent to roughly US&$1.50 per small item and $US2.50 per large item of clothing.
Money
There are safes in each room.
Accepted payment on location
MasterCard and Visa are both accepted. A 2.5% surcharge is applied.

Other lodges in Kenya Coast

Pinewood Beach Resort is a relaxed resort-style hotel at the far south end of Diani Beach - an area known as Galu Beach.

Kinondo Kwetu is a small, owner-run, all-inclusive boutique lodge of exceptional quality situated on a remote stretch of beach south of the busier Diani Beach area.

Diani Blue is a low-key but stylishly comfortable small guesthouse, with high levels of service, in a busy, central part of Diani Beach.

The Sands At Nomad

The Sands At Nomad is a good-value, laidback, family friendly resort with lots of Swahili character.

The low-key and long-established Driftwood is a family-friendly, owner-managed, bungalow-style beach hotel on a beautiful stretch of sands just south of Malindi town.

Alfajiri Villas is an exclusive, owner-run, hideaway property consisting of three unique villas in a central part of the north end of Diani Beach.

Peponi is a long-established beach hotel, renowned for its good food, located in the village of Shela on the south side of Lamu island.

The Mnarari Club is located towards the seaward end of the beautiful Killifi Creek, and is an enduring favourite on the Kenya coast.

Ocean Sports is long-established and popular beach hotel right on one of Watamu's famous and beautiful bays.

Afro-Chic is a modern, Mediterranean-style ten-room boutique hotel on Diani Beach, with good food and a pleasant pool.

Shimba Lodge is a picturesque tree-hotel overlooking a forest waterhole in Shimba Hills National Park, with an aerial walkway and abundant wildlife.

Kutazama is an owner-managed, boutique luxury lodge in the Shimba Hills in a stunning location overlooking the Mwaluganje Elephant Sanctuary.

Long-established resort hotel with a strong British following and a good reputation for deep-sea fishing.

The Sands at Chale Island

The Sands at Chale Island is a beach resort offering plenty of activities and beautiful flora and fauna all around.

Kizingo is an owner-managed, rustic, barefoot beach lodge on the southwest tip of Lamu island.

Kipungani Explorer is a relatively large rustic beach lodge on the west coast of Lamu island.

Manfriday’s Mida Cove is a stylish beach lodge, suited to those who are sociable and will enjoy the engaging hosts and the convivial atmosphere they create.

Che Shale is sand-and-palm-tree beach lodge of rustic bandas, dedicated to kitesurfing and chilling out, located on a remote and beautiful bay half an hour’s drive north of Malindi Airport.

Manda Bay is a luxury beach hideaway in a remote corner of an island in the Lamu archipelago, on Kenya's northern coast. It has a huge range of water sports on offer.

The Majlis is a modern 27-room resort hotel on the beachfront of Manda island.

Swahili Beach is one of the biggest resort hotels on Diani Beach, with a spectacular lobby and cascading swimming pool.

House on the Beach

House on the Beach is a comfortable family-size, private beach house with a large pool set by a cave complex, and a delightful garden leading down to the beach, in a secluded spot on Tiwi Beach.

Msambweni Beach House is a secluded and luxurious boutique hotel on the southern Kenya coast, south of Diani Beach.

Lamu House is a boutique hotel on the waterfront in Lamu town, with a swimming pool, bar and terrace restaurant.

The Maji is a small, well managed beach hotel on the northern stretch of Diani Beach in southern Kenya.

Funzi Keys is a remote beach property on its own private island on the far south coast of Kenya. Rustic in style, it will suit you if you cherish exclusivity over modern design.

Tijara Beach is one of the smallest and quietest beach properties on Kenya’s coast, with a focus on rest and relaxation away from other tourists.