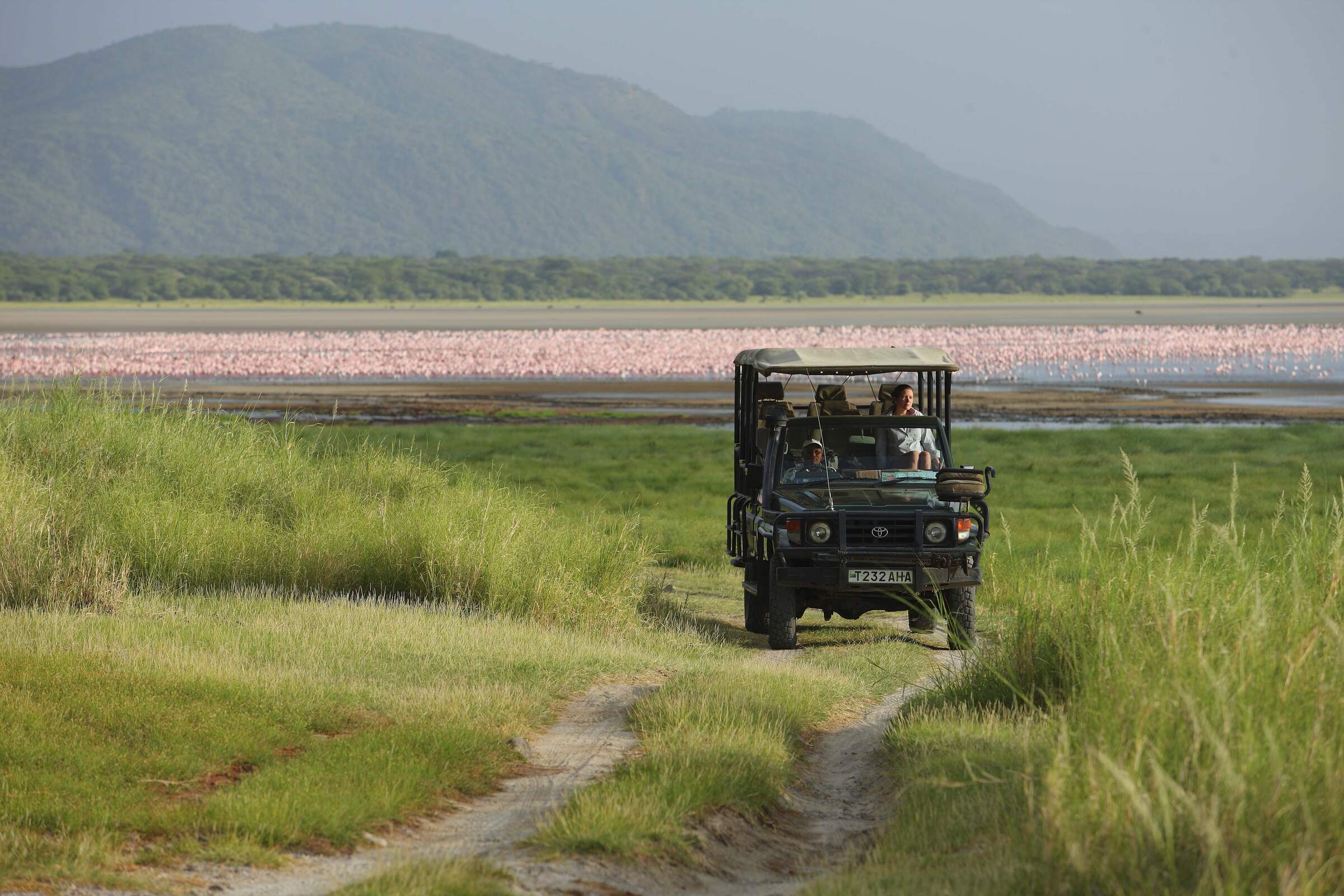 16 independent comments and wildlife information from our travellers who have visited Lake Manyara Tree Lodge and kindly agreed to share their thoughts. They do not necessarily represent the views of Expert Africa

2 nights Arrived 11 Oct 2018
"This place has to be seen to be believed. The rooms are amazing, I don't think we will ever stay anywhere better. We even had elephants walk past us as we sat on the balcony.
Our guide Abdalla was very experienced and knowledgeable and had a great sense of humour." See all these reviews: 8n in Tanzania; 1n in Kenya
Experience Report
Overall Rating:
Excellent
Location:
Excellent
Service:
Excellent
Activities:
Good
Rooms:
Excellent
Food:
Good
Facilities:
Excellent
Sightings Report

3 nights Arrived 28 Sep 2018
"It was such a good choice. On the ride from the airport to the Lodge our superb driver showed us lions (actually two climbing a tree!), buffalo, elephants, hippos, baboons, warthogs, monkeys, flamingos, etc.
The food at the camp was superb. Being greeted at the entrance with a frozen vodka cocktail certainly helped.
We had our only night drive at Manyara, which we thoroughly enjoyed. At night all of the hippos were out to be seen.
As we drove away from the Lodge for the airport we encountered a huge group or two of elephants (our guide theorized 100!). As they were emerging from the thick woods on all sides of us, it was remarkable.
They carefully accommodated my wife's CPAP during the night, so that was never a worry." See all these reviews: 11n in Tanzania
Experience Report
Overall Rating:
Excellent
Location:
Excellent
Service:
Excellent
Activities:
Excellent
Rooms:
Excellent
Food:
Excellent
Facilities:
Excellent
Sightings Report

2 nights Arrived 9 Oct 2017
"This was our favourite lodge on holiday. Although the animal experience is not as dramatic as the Serengeti, the location and landscape around the lodge easily make up for this. A two night stay is a must! One night is total waste of time. Lake Manyara is a very special place and those people passing through in one day have no time to fully appreciate it.
The accommodation was stunning and immaculately presented. The restaurant is beautiful and serves very sophisticated food in a glorious romantic setting. All the staff were totally charming and went out of their way to make our stay unforgettable." See all these reviews: 8n in Tanzania; 3n in Zanzibar; 1n in Kenya
Experience Report
Overall Rating:
Excellent
Location:
Excellent
Service:
Excellent
Activities:
Excellent
Rooms:
Excellent
Food:
Excellent
Facilities:
Excellent
Mr & Mrs G
Cumbria

3 nights Arrived 7 Oct 2016
"We planned our stay here especially for the birds and it didn't disappoint us. Our guide, Peter, was very knowledgeable on his birds and very obliging and patient with our constant requests to stop.

The camp is in a great location and the individual tree lodges are well furnished and maintained. The open mesh windows in the lodges make nighttime very atmospheric. Staff are very friendly and the food is excellent. Dining around the boma in the evening under a starlit sky is a fantastic experience." See all these reviews: 10n in Tanzania; 3n in Kenya
Experience Report
Overall Rating:
Excellent
Location:
Excellent
Service:
Excellent
Activities:
Good
Rooms:
Good
Food:
Excellent
Facilities:
Good
The P family
Norfolk

2 nights Arrived 7 Sep 2016
"Made to feel so welcome. The room was amazing and the personal care just the best. The game drives were so different from normal savannah with sunrises over the lake. A profusion of birdlife and a good variety of mammals. No tree climbing lions though. We were joined by 2 large bull elephants whilst having lunch at the pool.

Food was good too and in particular we enjoyed our dinners surrounded by night lights and being joined by a greater galago.

2 nights Arrived 2 Sep 2014
"Our guide Stephen was excellent. Well educated, good mannerd and fun to be with. Two nights in this small but beautifull park are sufficient to explore the area.

"Luxury in the bush"

3 nights Arrived 13 Feb 2014
"This tries to be high-end luxury and succeeds. Very personalised service - your own butler - the accommodation was lovely and comfortable and, once again, the staff have to be praised.

The food was all you expected it to be with unusual ingredients, all fresh and sourced locally.

2 nights Arrived 6 Oct 2013
"Being in our room was like living in the jungle - surrounded by thick undergrowth and tall trees, filled with monkeys and bush babies. There were quite a few exciting moments here!

We met a large bull elephant on the path as we were going for breakfast the first morning so we backtracked up to steps to safety and they monkeys obviously thought Lawrence needed to diet since one stole his breakfast right off his plate!!

The same day Patrice, our wonderful butler set up our lunch at the poolside, next to the wallow hole. He later warned us that an elephant was on its way to the hole and was using the footpath, advising us to put the swimming pool between us and the elephant. This did happen and after studying us for what seemed like an age, it progressed to the water hole. A second less friendly elephant arrived later and was less pleased to see us. After a lot of ear flapping, trumpeting and mock charges, we decided that discretion was the better part of valour and gave our dessert a miss, leaving him in peace ! The staff did keep a careful watch on how things were going so we didn't feel as if we had been abandoned ! It was a reminder though that these are wild animals and not peaceful and benevolent giants. We saw many family groups of elephants during safaris in Manyara and it was a treat to see how carefully they guarded their young and how sociable they are.

Another treat here were the enormous troops of baboons, who held evening meetings on the road !!

Sundowners at the beautiful shore of Lake Manyara. Malley our guide was always very keen to ensure we saw everything, always trying to put in the extra effort to ensure we had a holiday of a lifetime.

On the final day, we were a little late arriving at the airstrip and were just handed a packed up breakfast as we left the car to go to the plane, when a cup of coffee would have been very welcome indeed, especially as it had been a cold drive. We felt very jealous of the new arrivals who had time for a leisurely coffee before beginning the next leg of their trip.
" See all these reviews: 6n in Tanzania; 5n in South Africa
Experience Report
Overall Rating:
Excellent
Location:
Excellent
Service:
Excellent
Activities:
Excellent
Rooms:
Excellent
Food:
Excellent
Facilities:
Excellent
Mss L & Mss W
NY

2 nights Arrived 31 Jan 2013
"First, the hotel is really beautiful. It was a perfect blend of modern luxury with being in a jungle. I loved it.

The only downside was the excessive presence of bugs and bats in our room. At night, we had no fewer than four bats flying around our heads, which was a little frightening for my friend. That said, the rooms were beautiful and I loved the outdoor shower.

Also, the main section of the lodge is just so Out Of Africa-style that I'd want to live there." See all these reviews: 7n in Tanzania
Experience Report
Overall Rating:
Good
Location:
Excellent
Service:
Good
Activities:
Excellent
Rooms:
Good
Food:
Good
Facilities:
Good
Showing 1-10 of 16
12
Next
99%
16 reviews of Lake Manyara Tree Lodge by travellers since August 2007
Overall rating by our travellers
15
1
0
0
0
Filter by month

With spectacular views over Lake Manyara, Kirurumu is one of the simplest camps we offer in northern Tanzania.

Lake Manyara Serena is a large, reasonably priced hotel perched on the lip of the Great Rift Valley with spectacular views of Lake Manyara.

With comfortable tents and an adventurous atmosphere, Lake Manyara Green Camp is one of two camps located inside the park.