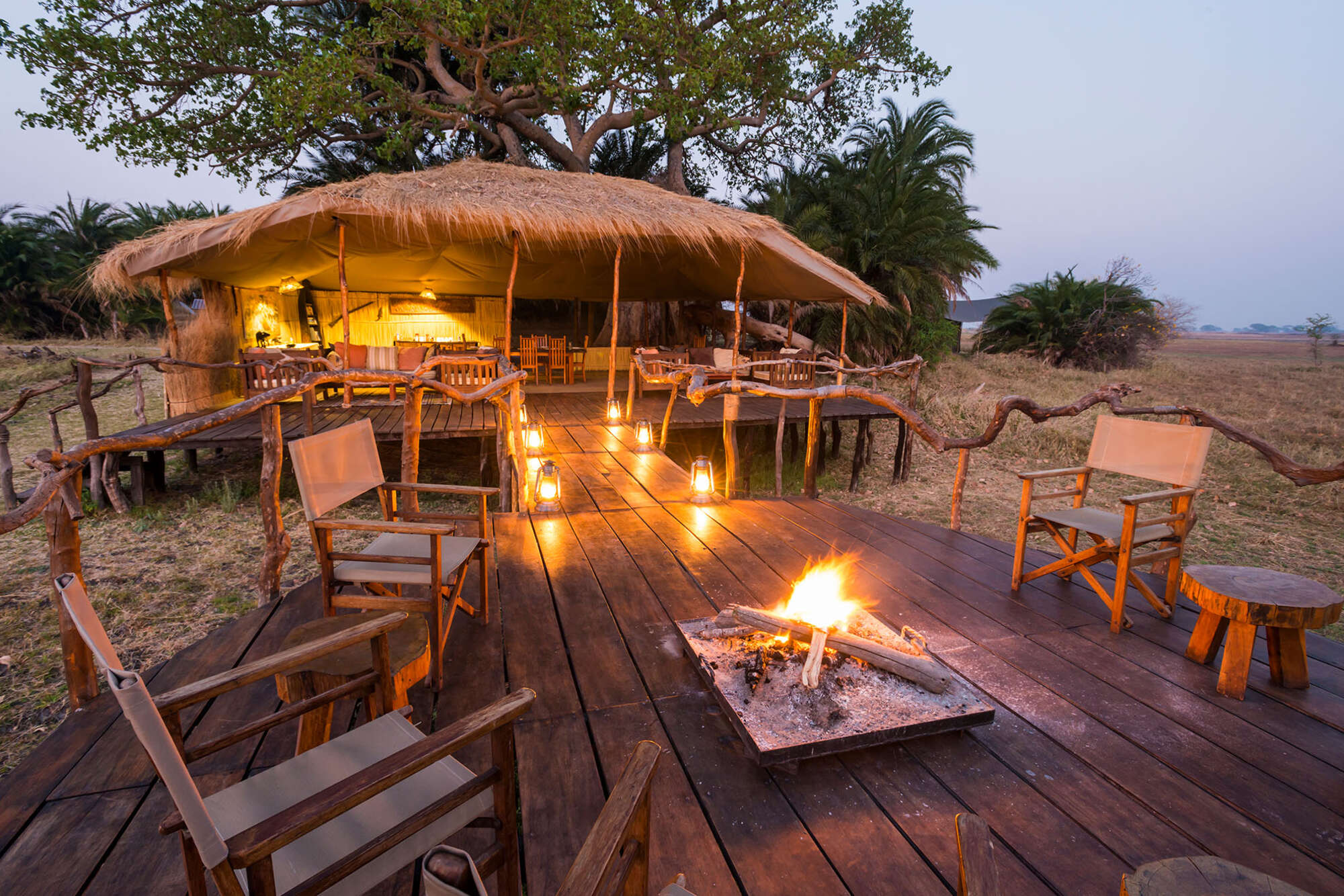 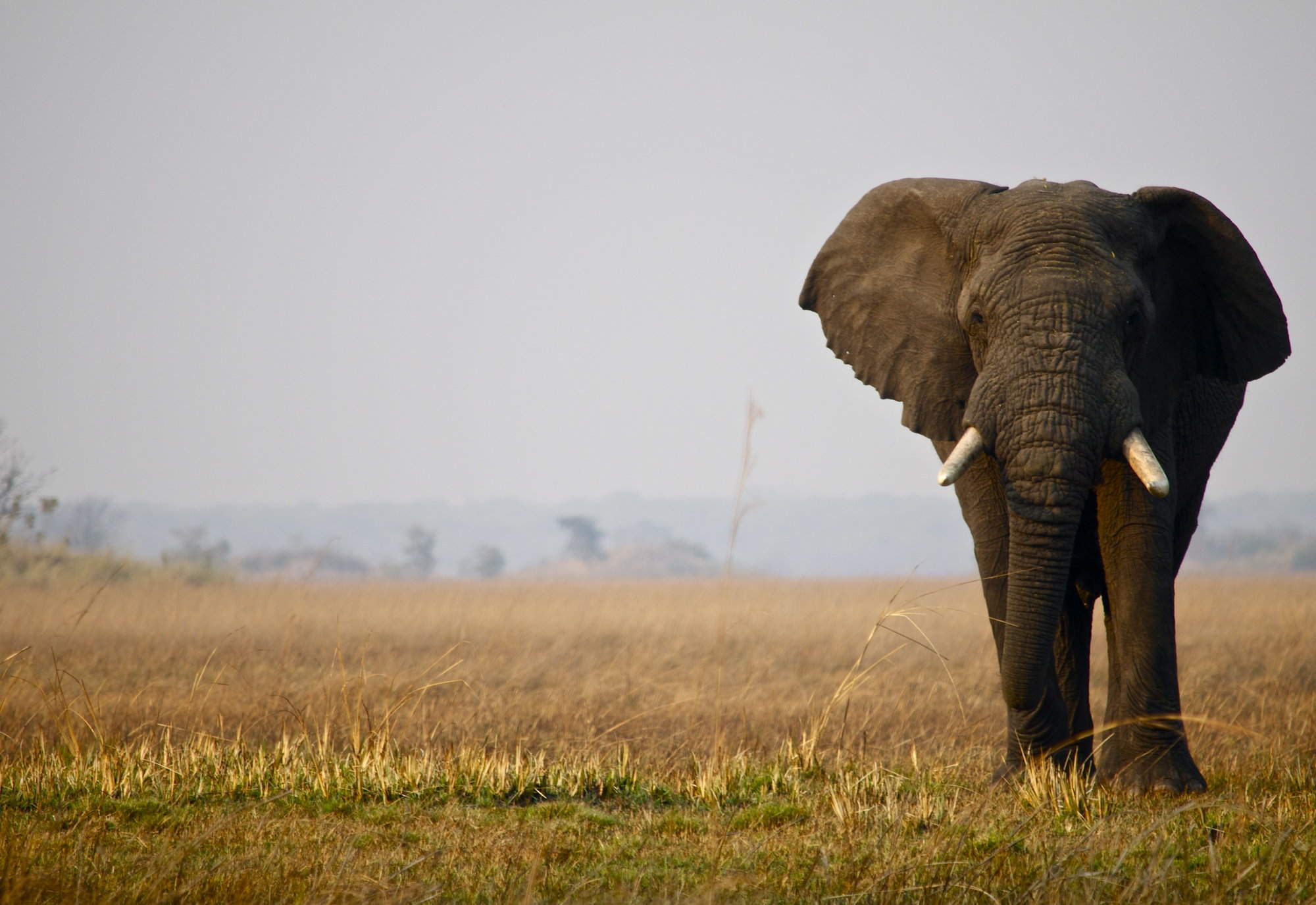 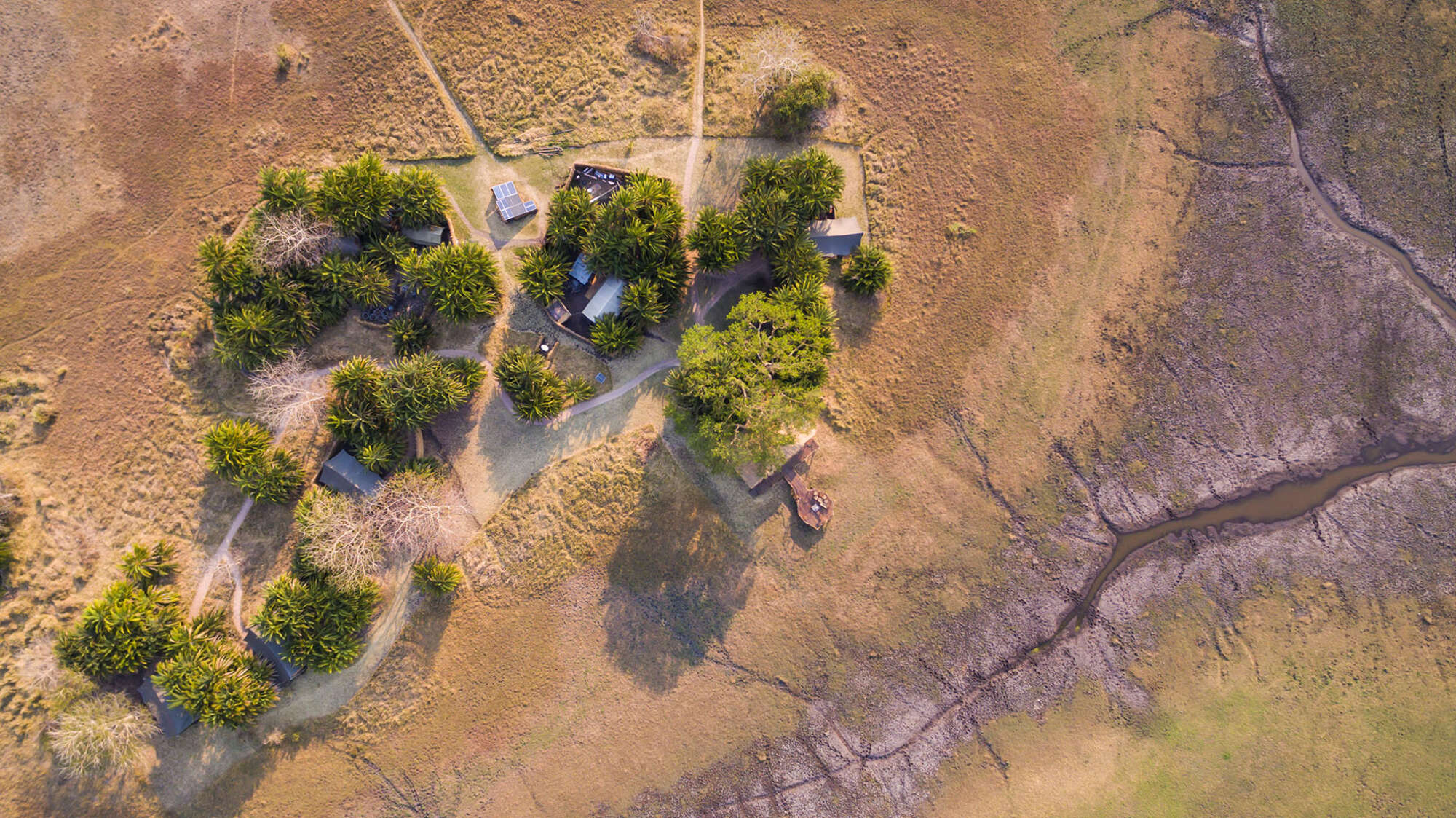 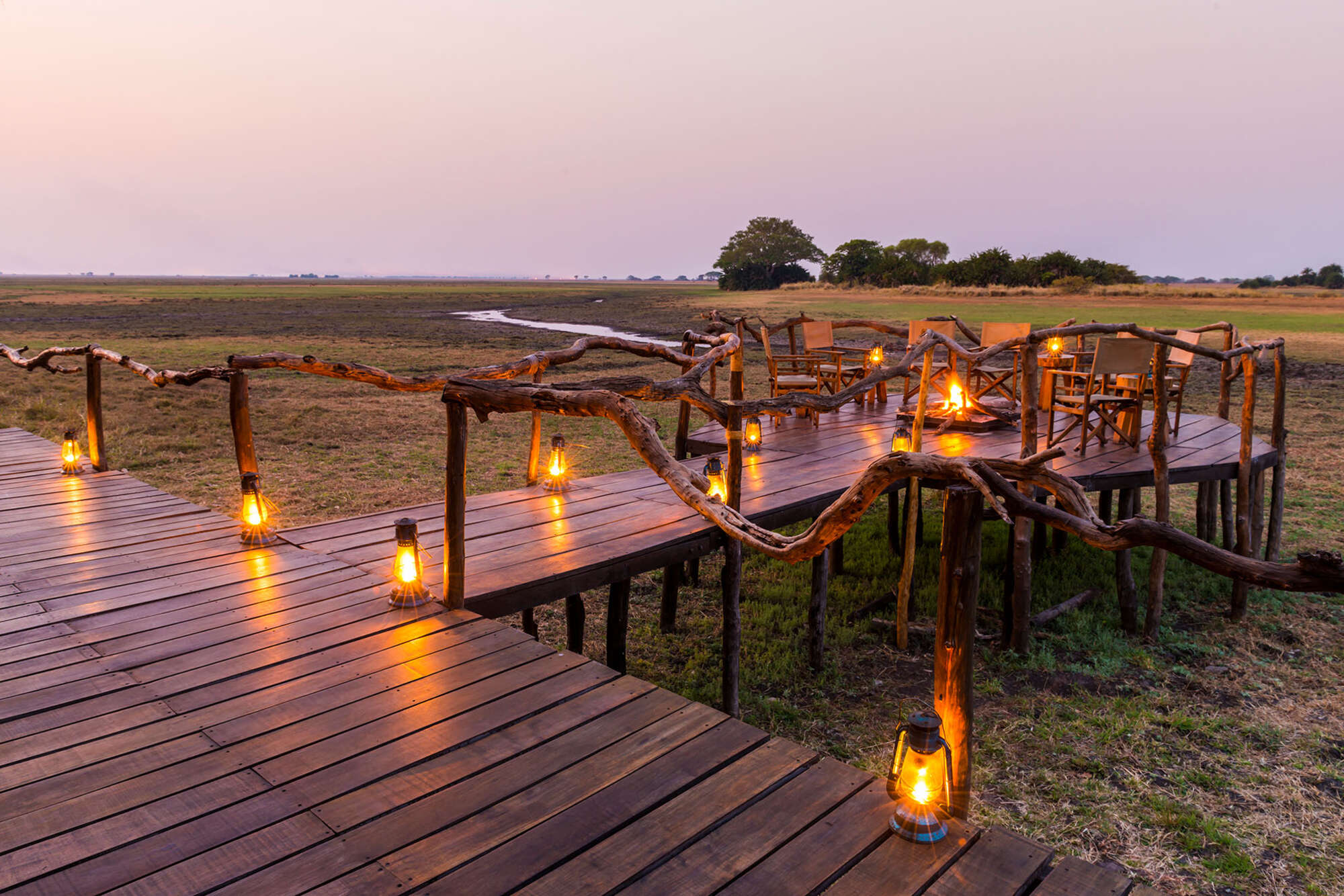 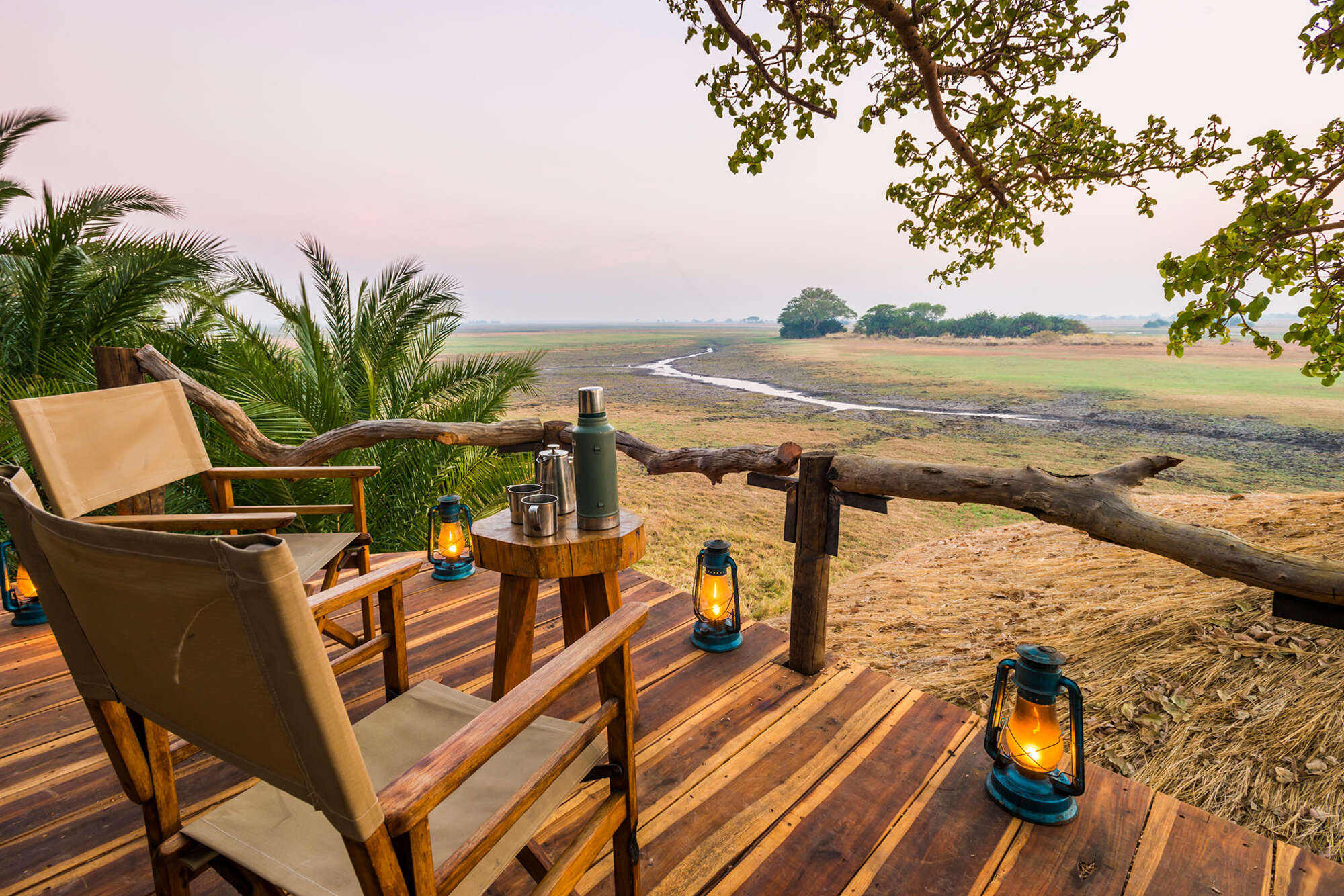 ... sheltered under a shady tree island. The north of Kafue National Park is made up of the huge Busanga Plains, a floodplain that dries out in the dry season to create a sweeping grassland, which attracts large numbers of plains game, and with them predators.

Mukambi Plains Camp (sometimes referred to as Busanga Plains Camp) is sheltered under a patch of fig trees and fan palms in the middle of the vast Busanga Plains. Surrounded by a small but permanent papyrus swamp, the camp has to be reached on foot via a small wooden walkway. This also makes it one of the best camps in Kafue for spotting the shy, but swamp loving, sitatunga antelope.

The camp has just four comfortable tents, each with a private outdoor bathroom with a flush toilet and bucket shower, just a few steps from the main entrance of the tent. The tents can comfortably accommodate twin or double beds, bedside tables, and a small canvas wardrobe. The front of the tents can be rolled up to provide views of the plains, and there are also a couple of wooden chairs under a canopy at the front. There is solar lighting in the rooms, while paraffin storm lanterns along the sandy paths and in the main area lend a natural, rustic feeling to the camp.

Unusually for a camp on the Busanga Plains, both walks and drives are offered. However, the walks are somewhat limited here, and can get repetitive up on the open grassy plains, so game drives tend to make up the bulk of peoples activities here.

The camp is one of the more isolated in Zambia, and as such it is slightly harder to reach. Many people will stay at Mukambi Plains Camp's sister properties Fig Tree Camp or Mukambi, both just off the main road from Lusaka, before transferring by road up to the Busanga Plains (approximately a 5 hour drive). Alternatively, from the start of 2016 it's been possible to affordably charter flights from Lusaka to Busanga Plains, followed by a short road transfer to camp.

Mukambi Plains Camp is a well run property in a stunning location in Kafue National Park. Access to the camp is a bit trickier then for other properties in the park, and though this situation is improving, the journey may be better suited to hardier travellers. For those looking for a rustic wilderness experience, but with some of the comforts of a permanent camp, then this is a great property.

Since mid-2018, many of our travellers who stayed at Mukambi Plains Camp have kindly recorded their wildlife sightings and shared them with us. The results are below. Click an animal to see more, and here to see more on our methodology.

Other lodges in Kafue National Park

Musekese is a small owner run tented camp, offering great guiding and a high degree of personal service in a stunning wilderness area, with modest game.

Busanga Bushcamp is a small but comfortable tented bushcamp (max 8 guests) which makes a great base for a wildlife safari to the Busanga Plains.

Shumba is a high-spec camp built on a tree island in the magical Busanga Plains. It opens in May, when the birdlife is particularly amazing; as the dry season progresses, the game can become remarkable.

Safaris to Kaingu Lodge, in the centre of the southern section of Zambia's vast Kafue National Park

Musekese Mobile Camp is a basic fly-camp on the southern tip of the Busanga Plains. Set date three night trips are run here, using Musekese Tented Camp as a base.

Fig Tree camp is in the centre of Kafue National Park, and in addition to having a stunning location is well placed to start or end your trip in the park.

Due to open in June 2020, we’re expecting Chisa Busanga Camp to be a small, intimate and rustic camp.

Mukambi Safari Lodge is a solidly built, comfortable property just off the main road from Lusaka, making it one of the most convenient camps in Kafue.