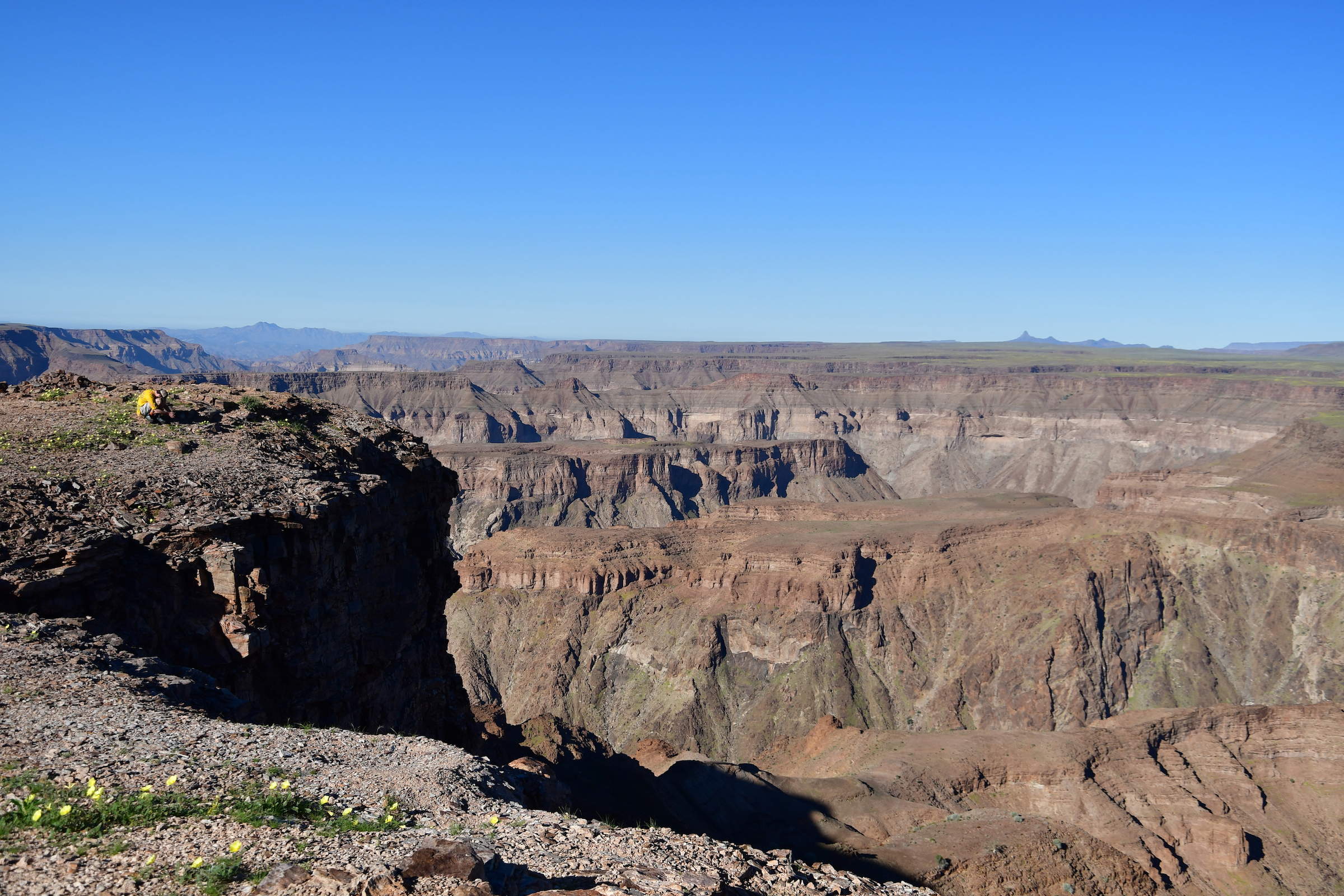 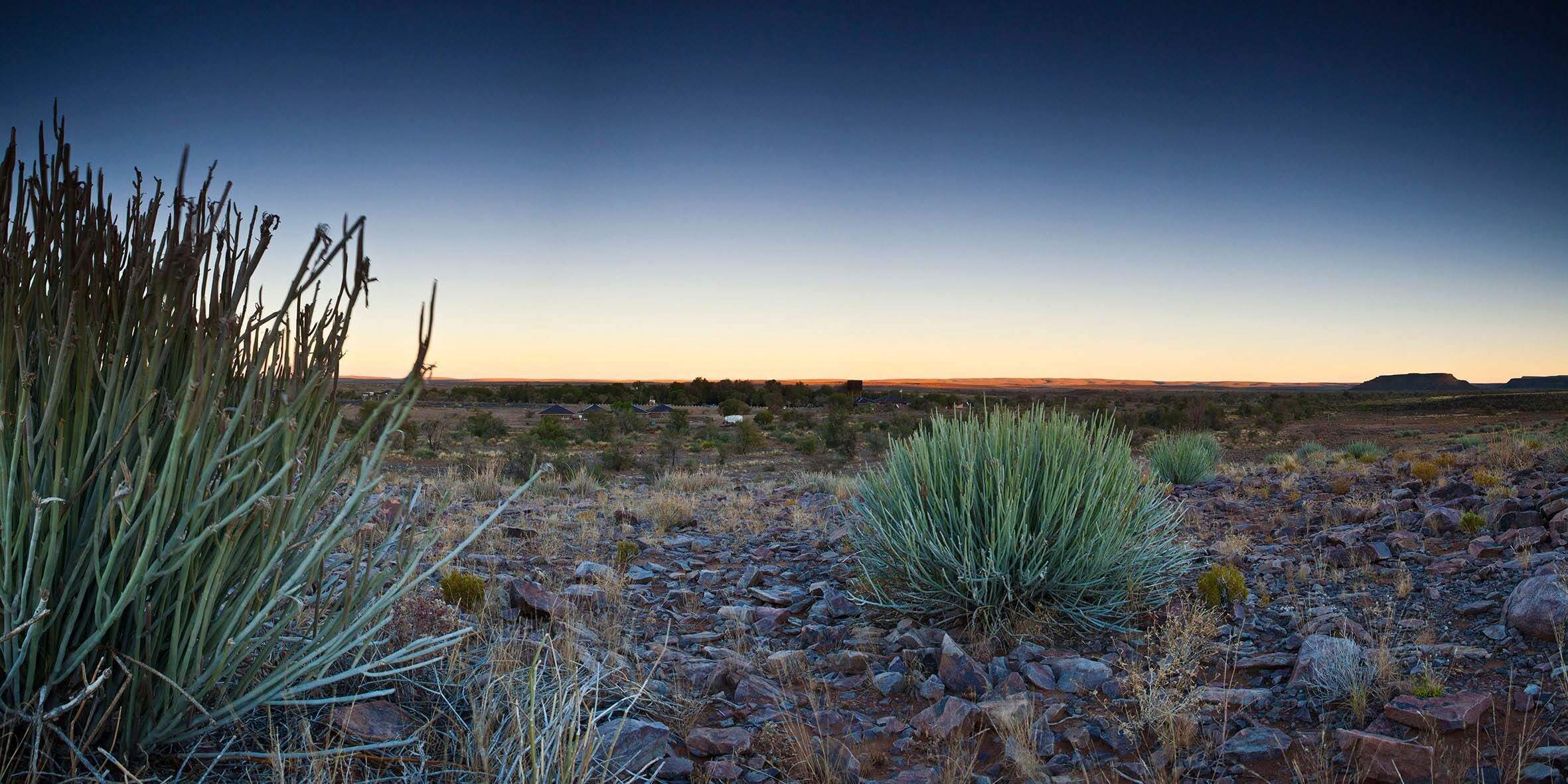 At the gateway to the iconic Fish River Canyon, the no-frills Hobas Lodge has plenty to shout about.

At the entrance to the eastern side of Fish River Canyon, which lies within the grandly titled /Ai-/Ais Richtersveld Transfrontier National Park, its sprawling site has long been the preserve of adventurous hikers heading down into the canyon the following morning. That sense of nervous excitement still prevails among campers, but now less-hardy souls can get a feel for the atmosphere.

Guests at the Namibia Wildlife Resorts’ lodge share the bar, Quiver Taste restaurant and a small pool with the campers, so there’s plenty of chance for interaction, but you’ll retire to a comfy bed in one of the six bush chalets. Simple but not unattractive, these open-plan rooms have sliding glass doors that reveal views of the desert plains, and stone feature walls that complement the surrounding environment. And while the adventurers make do with communal ablution blocks, you’ll have an en-suite bathroom and kitchenette all to yourself.

Then, with an easy drive to the canyon’s main viewpoints, you could even be at the top in time to watch that day’s group of hikers descend at first light.

When we travel we take lots of photos ourselves to give you a real and un-edited view of the safaris. See our 2 pictures of Hobas Lodge to get the candid view.

Look closer at the environment and surroundings of Hobas Lodge.

When to go to Fish River Canyon

Our month by month guide: What it's like to visit Hobas Lodge in Fish River Canyon

January is at the heart of Namibia’s rainy season. However, as you’d expect from a country dominated by desert and semi-desert environments, the rains are often (but not always) weak and usually quite localised. Some days will be clear, the strong sun raising temperatures to around 30ºC/86ºF; on others humidity and clouds build, sometimes culminating in spectacular thunderstorms. In extreme cases, these generate flash-floods which race down the beds of ephemeral rivers.

Across the country, the greening landscape makes a refreshing change, especially in desert areas. Many birds are in full breeding plumage and migrant species are here in force. In the north, where the rains are more reliable, the abundant water and food allows wildlife to disperse, making it trickier to spot.

February is the wettest month, but as Namibia is dominated by deserts, the rains are often weak and patchy. The variation in weather across Namibia is significant, too; the central highlands and Caprivi can see some heavy rain. More typically, some February days are clear with a hot, strong sun; others are cooler as cloudy skies build and, sometimes, culminate in short, spectacular thunderstorms. Occasionally these generate flash-floods, bringing ephemeral rivers to life and making travel more challenging.

Across the country, the landscape feels green and alive; insects and smaller animals are more easily seen, and many birds and animals are raising their young. However, small pools in the bush and thicker vegetation can make it hard to spot the wildlife.

March usually sees Namibia’s main rains tailing off, although actual precipitation varies hugely across the country and can be unpredictable from day to day. Many days will be clear, with a strong sun driving temperatures up. On others, clouds will build, and the late afternoon may see a short, spectacular thunderstorm. Such deluges reduce in both frequency and volume as the month progresses.

Across the country, landscapes are often vivid: a “green and pleasant land”. Many birds and animals are finishing raising their young, so smaller animals and insects are in evidence. In the north, where rains are generally heavier, pools in the bush and thicker vegetation can make it difficult to spot larger animals.

Typically, April is dominated by dry weather; there’s an ever-decreasing chance of rain. Temperatures are now below their peak and continue to fall. Even so, days remain pleasant and warm, but there might be a slight chill in the air at night. The rains usually leave many parts of the country verdant and green, so animals are in fantastic condition – often with fast-growing young in attendance.

With the dust washed out of the atmosphere, photographers make the most of clear air, spectacular landscapes and healthy animals. Stargazers will have clearer night skies as the month progresses. In the game parks of Northern Namibia, water and food remain in plentiful supply, so finding big game can prove trickier than later in the year.

By May, Namibia is usually drying out fast as the rains have ended. If they’ve been good, then the land remains green, but wildlife starts to congregate at more permanent water sources. Over much of the country the air quality and clarity can be amazing, making this an ideal month for photography.

May’s good-value rates, increasingly good wildlife sightings, beautiful landscapes and crystal-clear air combine to make this one of our favourite months in Namibia.

Namibia is dry again. Skies are blue and usually largely cloudless. Days are lovely: warm and dry; nights are cold, sometimes below freezing in the desert. Most swimming pools in Namibia are always outdoors, making them too cold for all except the very dedicated.

Take a warm hat and gloves for game drives, where dawn and dusk will feel particularly chilly. In the north, especially Etosha, wildlife viewing is now into its dry-season pattern, focusing around the waterholes – though the park is still not busy.

Photographers come for superb air clarity, with minimal dust or smoke in the air. Historically, June rates have been low. However, with Namibia’s increasing popularity many lodges now count it amongst their “high-season” months, and request higher prices.

Reliably warm daytime temperatures (upwards of 20ºC/70ºF) and good wildlife sightings make this a popular month to visit Namibia. Rain would be very unusual indeed and clear skies make for great photographs. Once the sun sets, though, temperatures cool rapidly bringing cold nights that may dip below freezing in the desert. Be prepared: dress in layers and expect early-morning and late-afternoon drives, and anywhere coastal, to be cold.

As the land dries and vegetation shrivels, game congregates beside drinking water: Etosha’s waterholes are busy with animals. Across the country, lodges charge “high season” rates; many are fully booked a year or more in advance, especially during European school holidays (from the latter half of July to late August).

August is the height of Namibia’s “winter”. Expect cloudless skies and plenty of warm sun in the day, but nights down to freezing in the desert. Dress in layers and bring warm clothes (including hats and gloves) for chilly starts and evenings. Only the hardiest even contemplate using outdoor pools.

It’s 3–4 months since any rain, so the land is dust-dry and much vegetation is golden brown. Many landscapes appear sparse and harsh. Wildlife congregates around available water sources, helping to guarantee good animal sightings.

Namibia is never really “busy” by the standards of Europe or the USA, but August is the most popular time to visit, especially for families. Book early (over a year in advance) if you want to stay at the best lodges.

September is a month of blue, cloudless skies and fantastic wildlife viewing. Rain is almost unheard of. As the month progresses, the days and nights get warmer. In some areas, daily maximums hit around the low 30s Celsius, although low humidity ensures this feels comfortable. The contrast makes the nights seem very cold. The air is becoming dustier, occasionally augmented by smoke from fires – so becoming hazy for photographic purists.

In the national parks, animals congregate around remaining water sources – making September one of the best months for game viewing. Hence it’s one of Namibia’s most popular months for visitors: a “high season” month that is often the time of choice for safari aficionados.

Namibia is usually at its hottest and driest in October. Temperatures build as the month progresses; towards the end, daily highs may exceed 40ºC/100ºF, though with humidity close to zero, even this rarely feels oppressive.

In exceptional years, isolated rain showers may fall in late October. More usually, the end of the dry season sees wildlife watching at its best, particularly in Etosha. The place feels like a desert as spectacular herds of thirsty animals gather around the available water. October is popular amongst wildlife enthusiasts and commands peak-season prices, even if dust and smoke may make the air hazy, challenging photographers. Visitor numbers can fade towards the end of the month, allowing a window for last-minute bookings.

November is always a bit unpredictable: sometimes dry and hot; sometimes cloudier and cooler. Typically, mornings are hot and cloudless and clouds appear in the afternoon. Humidity builds and eventually breaks, resulting in spectacular thunderstorms that bring convection rainfall in late afternoons. Such storms are typically sparsely distributed and highly local – being completely absent from desert areas, for example. Places that do get good rain will flush green, with a tangible feeling of new life softening the landscapes. Many mammals give birth to their young.

Once any rains come, wildlife dissipates in search of food, and game viewing in Etosha becomes harder. Conversely, this is a great time for birdwatchers, with migrant species in breeding plumage.

December is the first “proper” month of Namibia’s rainy season, and one of its hottest. Clear mornings give way to building clouds and, with luck, the occasional short, spectacular thunderstorm: refreshing and cleansing. These are often highly localised and generally warmly welcomed: most Namibians love rain!

Rains clear the air of dust. Even relatively short showers enable plant life to erupt, carpeting this thirstland in green and providing food for the young animals which abound. Animals disperse widely, which can make game viewing challenging. Many birds are breeding and so sporting their most colourful plumage.

Christmas and the New Year fall within local “summer holidays” – so places to stay can be surprisingly busy, especially in and around coastal towns, where temperatures are cooler.

Advice on how to get to Namibia

Which car type to rent

Including pictures & descriptions of roads

The best time to visit Namibia