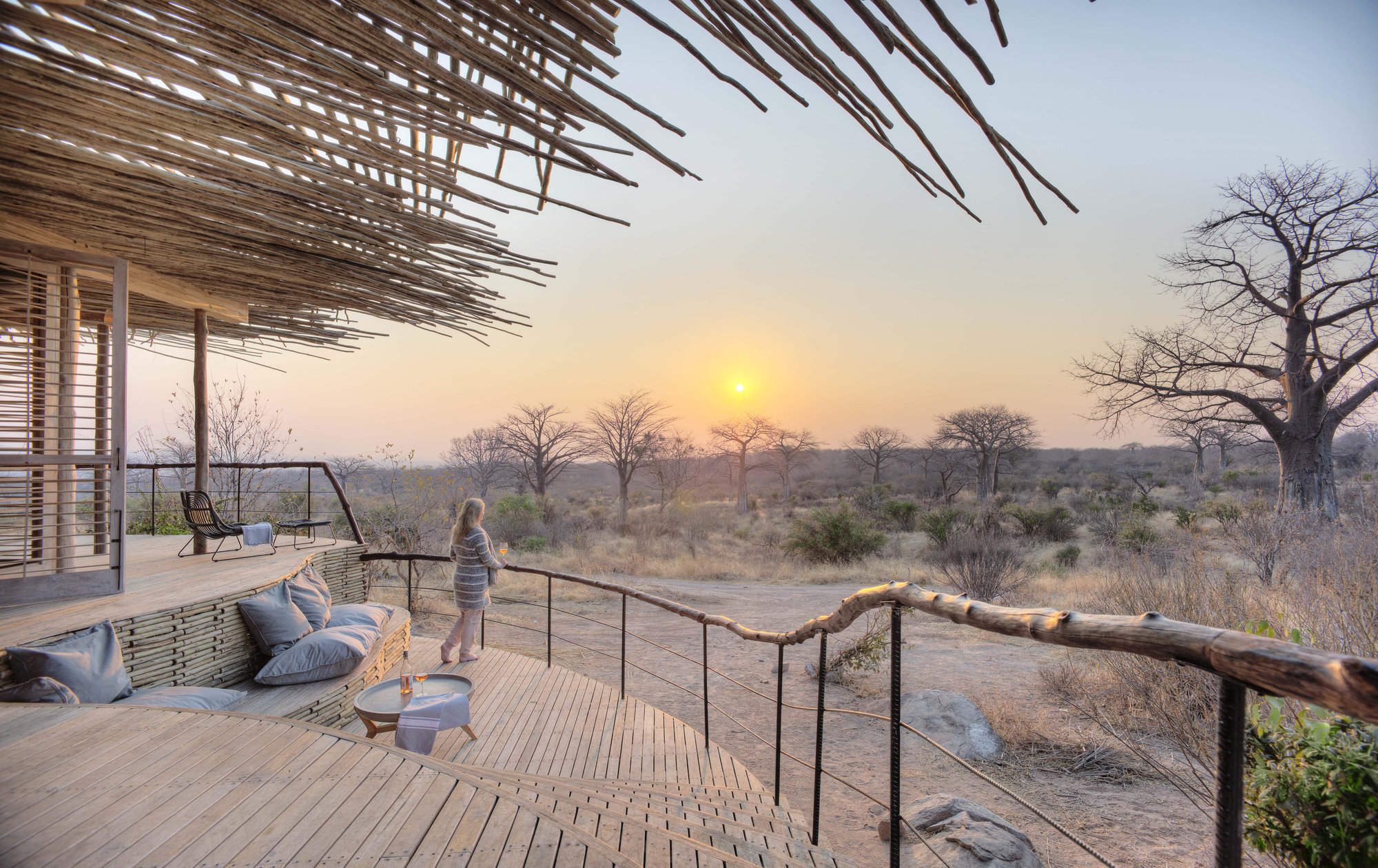 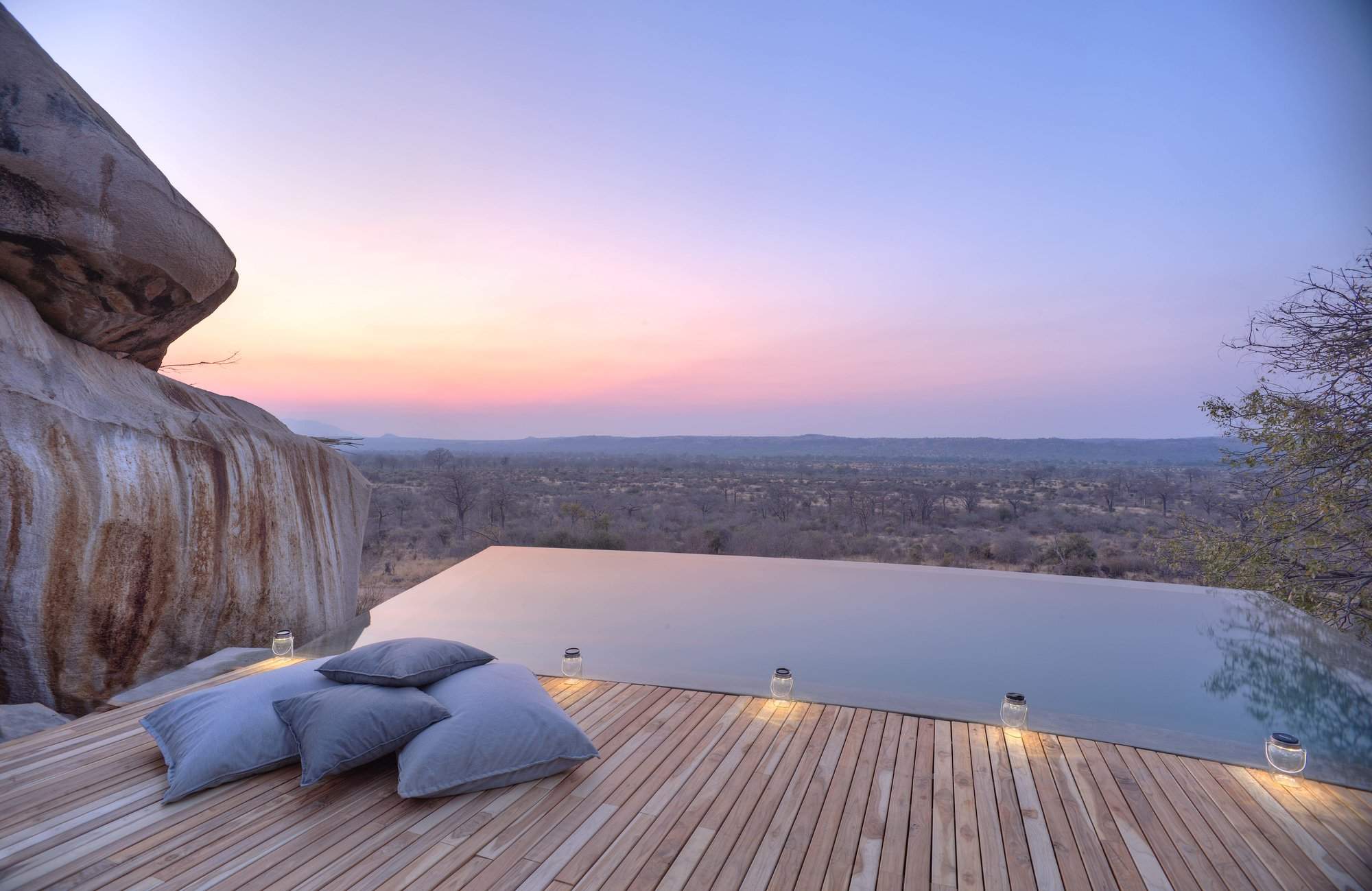 It opened in September 2017, in a prime game viewing area with commanding views over the park and the Mwagusi River.

Jabali Ridge is owned and managed by the same team who run a number of high quality safari camps across Tanzania; including neighbouring camp Kwihala. They have established an excellent reputation in Tanzania for their standards of guiding, service and food and as their flagship camp in the southern circuit Jabali is no different.

Jabali Ridge is set between rocky kopjes located in the northern area of Ruaha National Park. This is one of the best areas of the park for wildlife, and during the dry season large numbers of animals congregate in search for water. Ruaha is famous for its high lion population and sightings of elephant and giraffe are also common.

The lodge has eight bandas dotted between the boulders. They are extremely contemporary in design, with plenty of wood, stone and other natural materials. Each banda is completely open-sided to maximise the views, with louvered floor to ceiling shutters that can be closed during the evenings, or opened completely during the day. The rooms are quite minimalist in style and neutral, earthy colours are used throughout. The heavy wooden-framed king-sized beds are surrounded by stylish mosquito nets. Though if you prefer not to have a net around your bed (the ones at Jabali are quite heavy and so do restrict vision out into the room), you can instead request for netted shutters to be put in place around the edges of the room.

The furniture in the room is not always the most comfortable but it is very striking - think stylish metal chairs that look beautiful but that you can't sit in for more than an hour! Whilst outside each banda is a private veranda with a soft seating area, shaded by a chunky wooden fringe canopy. There is a large en-suite bathroom with a vast rain shower, separate loo, double sinks and complimentary toiletries.

The main quibble we have with the rooms at Jabali is that the louvered shutters that run round most sides of the bandas do not provide much privacy from neighbouring bandas. The lack of privacy is also evident when outside on the veranda, as a number of the bandas overlook each other due to poor spacing between them. The management are fully aware of these issues and are actively working on providing solutions for them, but in the meantime, speak to us about working around them with careful room choices.

Jabali Ridge has a spacious central lounge and bar, with a separate space for dining. As with the bandas, they are completely open-sided structures, and are set higher up the kopje so are afforded some of the best views from the lodge. The spaces are decorated in a neutral colour scheme with plenty of wood panelling, modern furnishings and striking lighting. There is an information area with a library containing a number of wildlife guides and natural history books, as well as novels to help you fill your siesta time.

One of the lodge's highlights is the beautiful stone infinity pool which offers panoramic views over Ruaha. Surrounded by wooden decking, there are also a number of sun loungers, a shaded seating area and a pop-up bar. In this area, there is also a small spa with a range of treatments on offer.

Activities at Jabali Ridge focus on 4x4 game drives, either split into a morning and an afternoon session or doing an all day drive including a bush lunch. Guests can also go out on night drives here. There is also the possibility of doing walking safaris, lead by some particularly good walking guides, where you will head out on foot to discover some of Ruaha's smaller, less well-known wildlife.

Jabali Ridge aims to offer one of the most luxurious stays in Ruaha National Park and is really unique and striking in its design. The guiding, food and service are befitting of a truly high-end, well-run and stylish lodge. Initially there were few cases of 'style over substance' that did somewhat detract from the overall quality of the stay. On our previous visit we did not stay, and as such can not guarantee that these problems have been completely ironed out, however we did not experience any issues with privacy and noise as previously reported. The management were aware of previous criticisms and seem to be actively addressing them to improve guest experience. Jabali is a stunning addition to Ruaha, and certainly a highly luxurious option, but we would highly suggest discussing this lodge in more detail with us to see if it will be the right fit for your stay.

Luxury
Jabali Ridge is an elegant retreat with beautiful views from every part of the property – a luxurious take on an African safari. This is easily one of the smartest properties ever built in Ruaha National Park!
See ideas for Luxury

Attitude towards children
The lodge has an age restriction of 5 years old but welcomes families with older children.
Property’s age restrictions
The lodge accepts children aged 5 and above.
Equipment
There is no special equipment for children.
Generally recommended for children
Jabali has a very adult atmosphere, is set over quite a large area and, with the exception of the swimming pool, does not have much provision to keep younger children occupied. We would recommend this lodge for older children or teenagers who will enjoy the luxury of the lodge and the game drives.
Notes
The lodge is set over a large area where big game regularly is seen; children must be under parental supervision at all times.

Power supply notes
A very large solar farm is being built at Jabali Ridge to provide the camp with outstanding sustainable energy. There is also a backup generator.
Communications
Wi-Fi is available in all suites and communal areas.
TV & radio
There is no television or radio at the lodge.
Water supply
Borehole
Water supply notes
The bathrooms are fully plumbed and filtered water is available for drinking.

Malarial protection recommended
Yes
Medical care
All guides and managers are first-aid trained. There is first-aid equipment in camp and in all of the vehicles. For emergencies, Jabali is linked to the flying doctor service.
Dangerous animals
High Risk
Security measures
Askaris (guards) patrol the lodge and guests are escorted to their rooms, during hours of darkness.
Fire safety
There is a fire break around the lodge and fire extinguishers throughout.

Disabled access
Not Possible
Laundry facilities
Laundry is included.
Money
Payment for any extras can be made in US dollars, Tanzanian shillings, British pounds or euros.

Ikuka is a stylish lodge-style safari camp set high on an escarpment with spectacular panoramic views over Ruaha National Park.

In a remote corner of Ruaha, Kichaka is a private mobile camp focusing on superbly guided walking safaris.