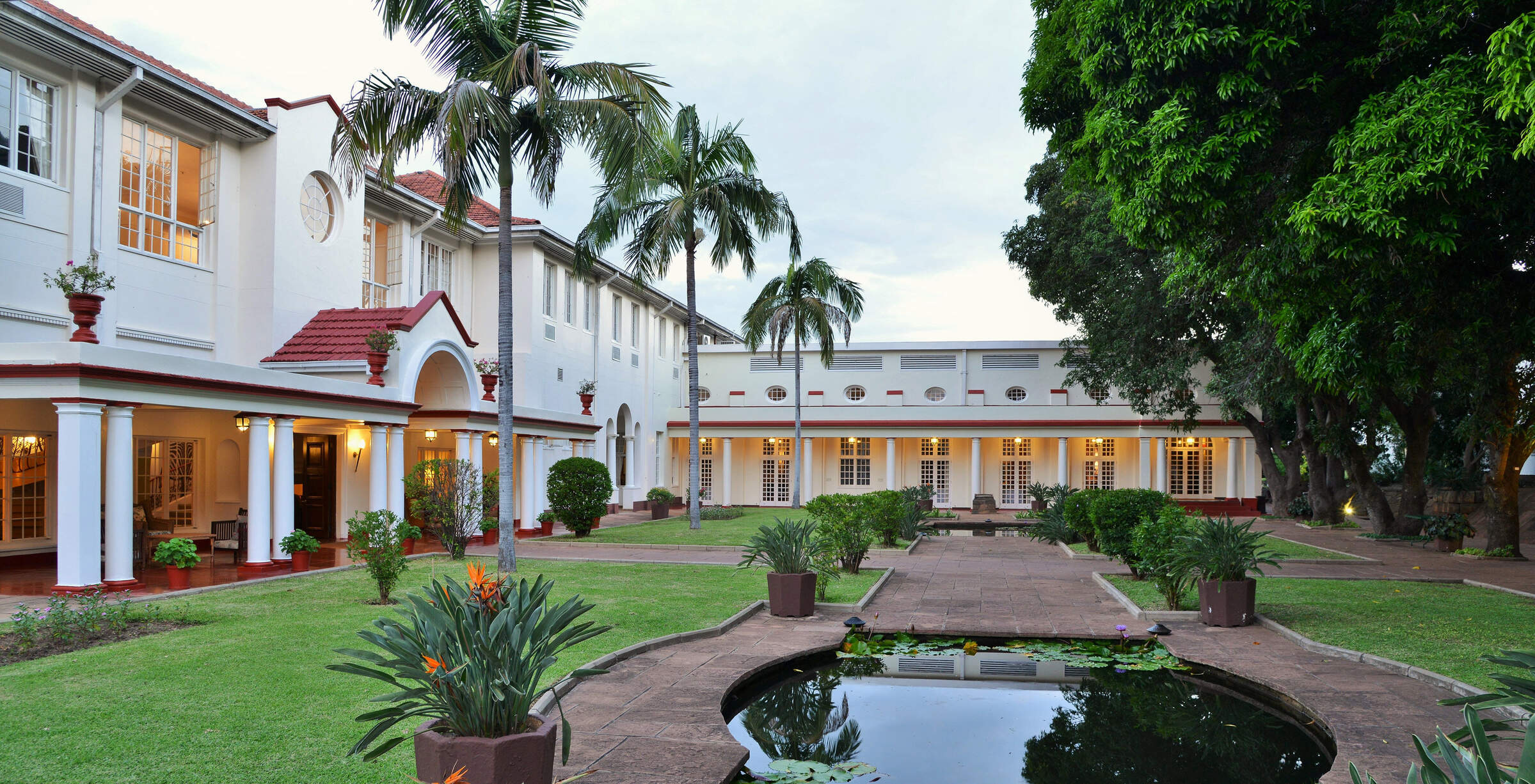 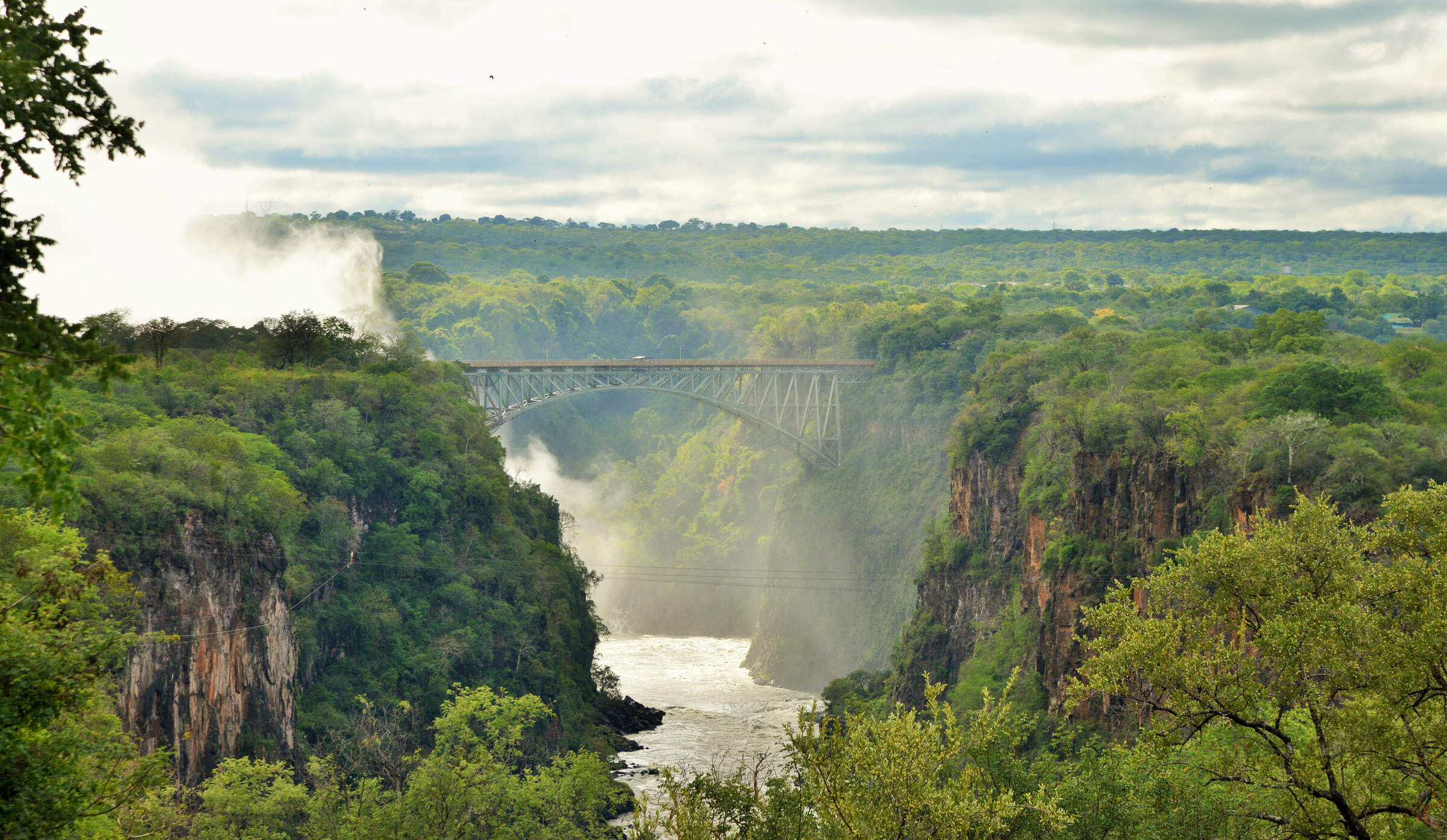 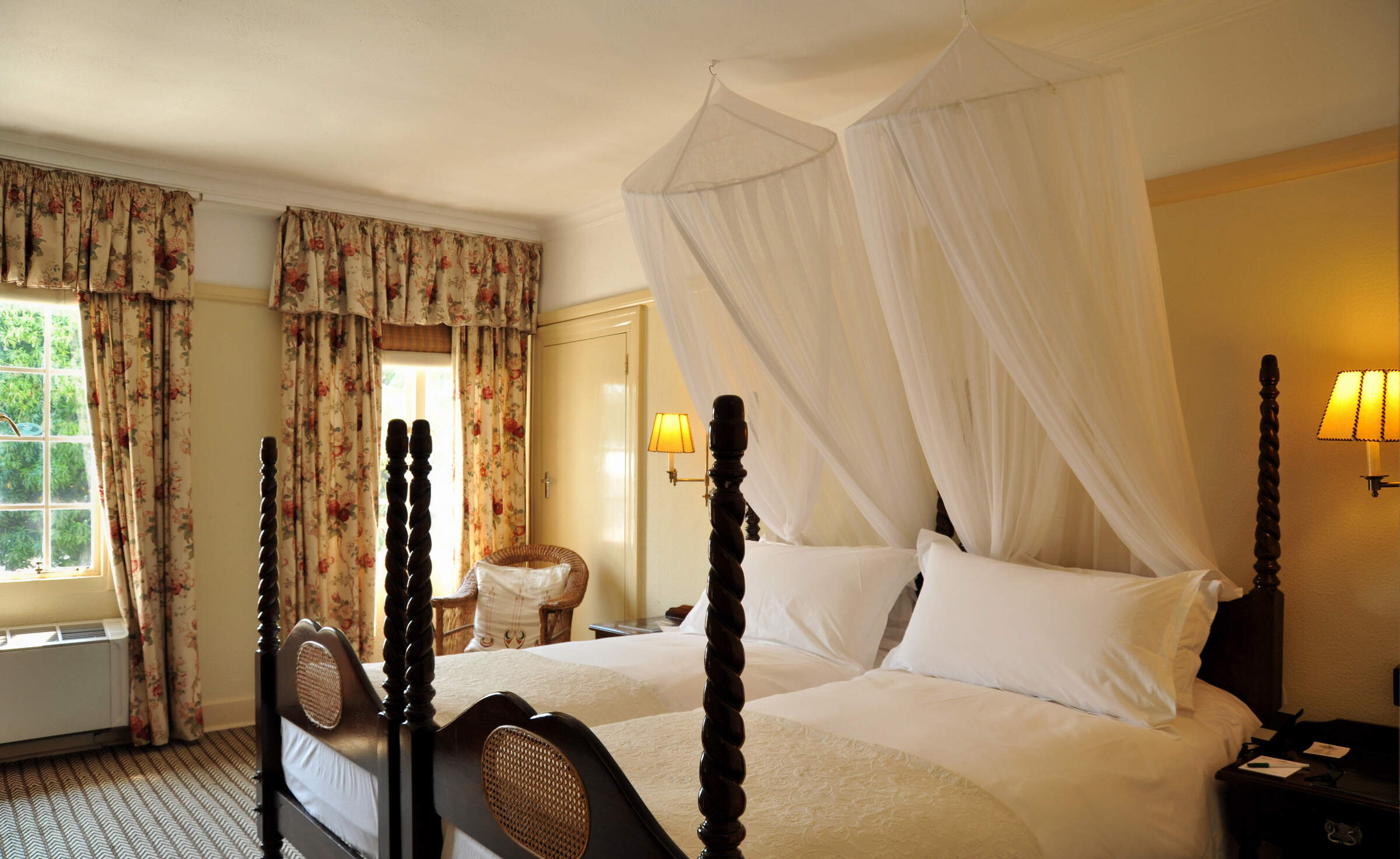 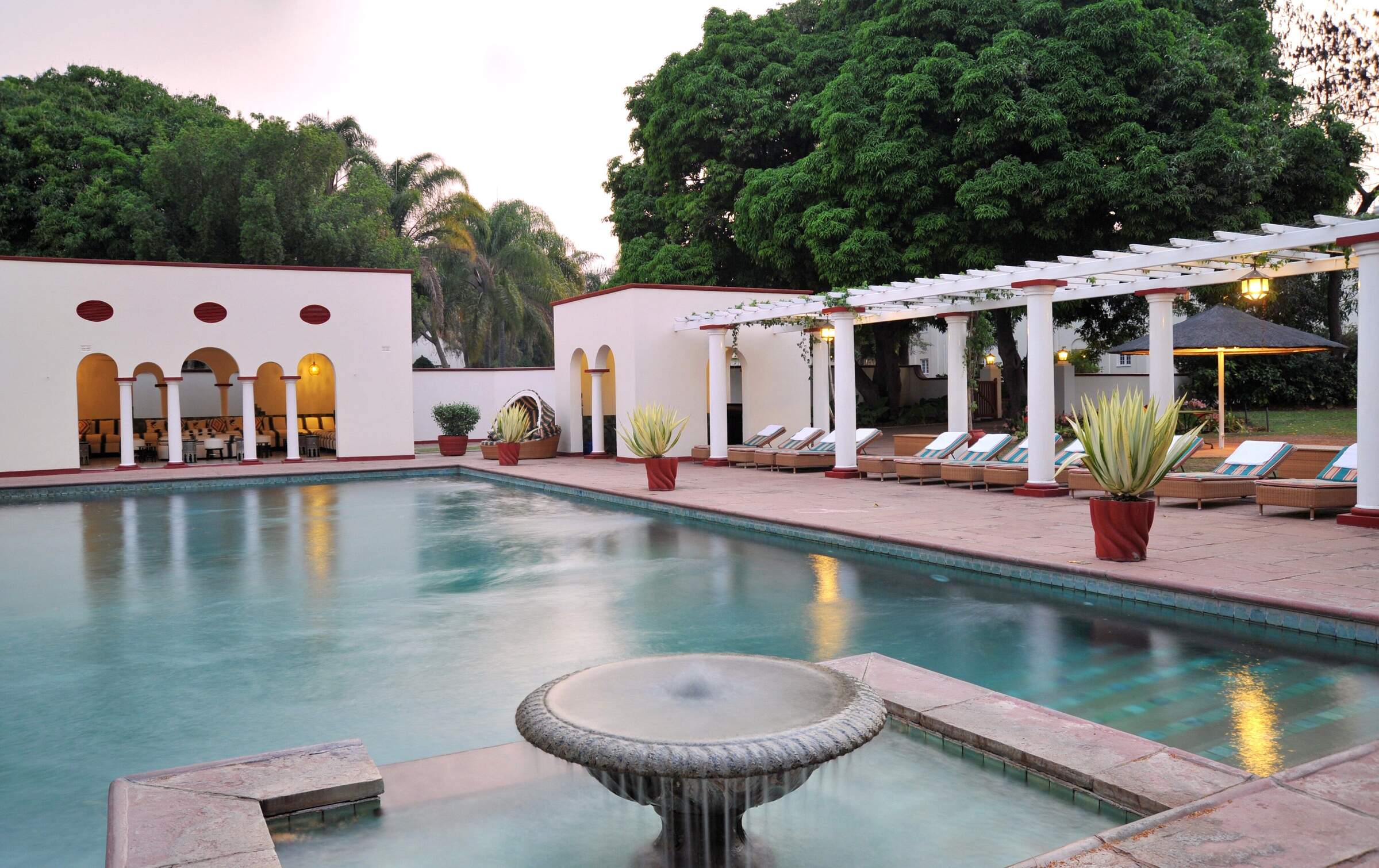 136 independent comments and wildlife information from our travellers who have visited Victoria Falls Hotel and kindly agreed to share their thoughts. They do not necessarily represent the views of Expert Africa

2 nights Arrived 18 Sep 2015
"The Vic Falls Hotel is a predictable but nonetheless charming place to stay.

Information about the wifi being limited to 3 devices but being able to get additional codes at Service Counter would have been helpful at the start of our stay (as I had problems in logging onto work for a call on the Friday night)." See all these reviews: 2n in Zimbabwe
Experience Report
Overall Rating:
Excellent
Location:
Excellent
Service:
Excellent
Rooms:
Good
Food:
Good
Facilities:
Excellent
LJ
Ealing

2 nights Arrived 18 Sep 2015
"Goodness - where to begin? A beautiful building making every best use of light, space and airiness even amid the midday heat. The character of the Victoria Falls hotel hits top notes to rival Maria Callas, yet with the discretion and understatement of a Lady rather than a prima donna. Most telling was the response of the 'bell hop' (a terrible phrase for a mature man) who not only revelled in my delight at the surroundings but who could not conceal his pride at five years association with this fabulous establishment. Its history, borne out in carefully chosen furnishings and art works, is a backdrop rather than a burden and carries through from the 'public' areas into the sumptuously equipped bedrooms.

The high standard of service was sustained throughout my stay, the staff attending unobtrusively to every detail. For example, on day one I asked the chamber staff how I might obtain an iron. On day two he asked if I had been given one - to which I replied 'no, but only because I haven't asked yet'. Remembering such details was a common feature across the team - this is an establishment whose leadership has very clearly managed to establish a sense of shared identity and professional pride at every level.

As to the food, I don't believe I have seen such a generously supplied breakfast, catering to every taste. Lunchtime sandwich 'snacks' could easily have served two. And I have a lingering memory of the mouthwatering dinner at the Livingstone Restaurant, being still unable to forgive myself for allowing the waiter to take my plate with some of my dish uneaten, even though I was full. Amazingly I nonetheless managed the occasional swim in the commodious pool which was just at the perfect temperature and provided with towels just when required.

Through enquiry I learned that the hotel is a little larger than when originally built, but this is scarcely felt as everything is entirely in keeping. A wander around the grounds revealed some crannies and oases that made the whole hotel feel entirely private.

The location is, of course, explicit in the name. Having visited for the purpose of seeing the Falls my stay was brief but the 'Activities' desk was receiving new hand-painted signage during my stay and I am sure there is plenty else on offer.

The only negative I can think of (and I am really having to dredge) is that the drinks service at the Stanley's Terrace was occasionally a little slow. But, with a view of Victoria Falls to gaze upon, this was scarcely a hardship.
" See all these reviews: 8n in Zambia; 2n in Zimbabwe
Experience Report
Overall Rating:
Excellent
Location:
Excellent
Service:
Excellent
Rooms:
Excellent
Food:
Excellent
Facilities:
Excellent
Mr T & Mrs M
Newmarke

2 nights Arrived 17 Sep 2015
"We really enjoyed being a part of the history of the Falls, by staying in this wonderful old hotel.

The only negative comment concerned the air conditioning unit in our room, which was extremely noisy.

However, we do appreciate that this is an old hotel, and it didn't detract from our overall experience." See all these reviews: 12n in Namibia; 5n in Zambia; 2n in Zimbabwe; 2n in Botswana
Experience Report
Overall Rating:
Excellent
Location:
Excellent
Service:
Good
Rooms:
Good
Food:
Excellent
Facilities:
Excellent
Mrs V
Canterbury

2 nights Arrived 12 Sep 2015
"Only got 1 Central Deluxe room, but other room was at the back overlooking the falls area and was ok but not so modern and had very noisy aircon unit ." See all these reviews: 9n in Botswana; 2n in Zimbabwe
Experience Report
Overall Rating:
Good
Location:
Good
Service:
Good
Rooms:
Average
Food:
Good
Facilities:
Good
Sue
USA

2 nights Arrived 14 Aug 2015
"Very nice hotel. Room was lovely with a great view on the garden and the bridge.

Restaurants were good (both Jungle Junction and Linvingstone Room) and not too expensive.

Breakfast was very good as well, with a large choice of food.

Stay in Victoria Falls was interesting - we did the walk around the Falls, which is great. However, the sunset cruise on the Zambezi river is too expensive and without interest" See all these reviews: 6n in Botswana; 2n in Zimbabwe
Experience Report
Overall Rating:
Good
Location:
Excellent
Service:
Good
Activities:
Average
Rooms:
Good
Food:
Good
Facilities:
Good
Mr & Mrs R
Richmond

2 nights Arrived 20 Jun 2015
"Frankly a must in my view for someone visiting Victoria Falls and going on to a Safari......amusing that Zimbabwean visas for anyone from Europe costs "only" US$ 30 and yet for Bits it's US$ 55! Regardless of your views re the politics of the country, the staff are great and the colonial experience somewhat unique. Not more than 2 nights....but the a la carte dining experience in the Livingston Room was interesting.

In viiew of the above, I think the lack of coverage of the Hotel in the Bradt guide to Botswana (which has a section on Livingstone which is on the Zambian side of the Falls) was odd......particularly bearing in mind that the guide was otherwise excellent." See all these reviews: 12n in Botswana; 2n in Zimbabwe
Experience Report
Overall Rating:
Good
Location:
Excellent
Service:
Good
Activities:
Poor
Rooms:
Average
Food:
Good
Facilities:
Average
Mr & Mrs S
USA

The activities--lion walk, elephant walk, helicopter ride--were great, although at $150 a pop, for the four of us it added up to close to $2,000. Other than the cost, no complaints." See all these reviews: 5n in Botswana; 2n in Zimbabwe
Experience Report
Overall Rating:
Excellent
Location:
Excellent
Service:
Excellent
Activities:
Good
Rooms:
Excellent
Food:
Excellent
Facilities:
Excellent
Showing 91-100 of 136
1...91011...14
Previous Next
94%
136 reviews of Victoria Falls Hotel by travellers since August 2007
Overall rating by our travellers
98
34
3
1
0
Filter by month

Other lodges in Victoria Falls

In close proximity to both the town and the Victoria Falls themselves, Sprayview is a value-for-money hotel that offers a comfortable base and an on-site activities centre.

The Elephant Camp is a luxury tented camp in its own private concession within Victoria Falls National Park, just a 15-minute drive from the town of Victoria Falls.

Batonka Guest Lodge is a small, friendly and comfortable option away from the bustle of Victoria Falls town, and a perfect base for exploring the Falls.

Situated just outside of Victoria Falls Town, The Victoria Falls Safari Club offers an exclusive, relaxing and luxurious base from which to explore the attractions of this region.

Gorges Lodge has spectacular views from its perch on the edge of the Batoka Gorge. Although it is out of town it isn't too far from the main attractions.

A lovely addition to the options in Victoria Falls, the stylish Old Drift has a great location in Zimbabwe's Zambezi National Park, with a range of activities.

Zambezi Sands is a stylish new camp with a range of activities on a remote stretch of the Zambezi River.

Set high above the Zambezi River, Little Gorges Tented Lodge is a tranquil spot to watch black eagles and from which to visit the Victoria Falls.

Just out of the town, Victoria Falls Safari Suites offers an exclusive, relaxing and luxurious base from which to explore.

Palm River Lodge's location on the banks of the Zambezi River offers a picturesque outlook.

The intimate Mpala Jena camp in Zambezi National Park offers a luxurious but eco-friendly experience in a true safari setting, within easy access of the Victoria Falls.

Located in a quiet suburb of Victoria Falls town Pioneers promised a relaxed stay in one of Zimbabwe's busiest destinations.