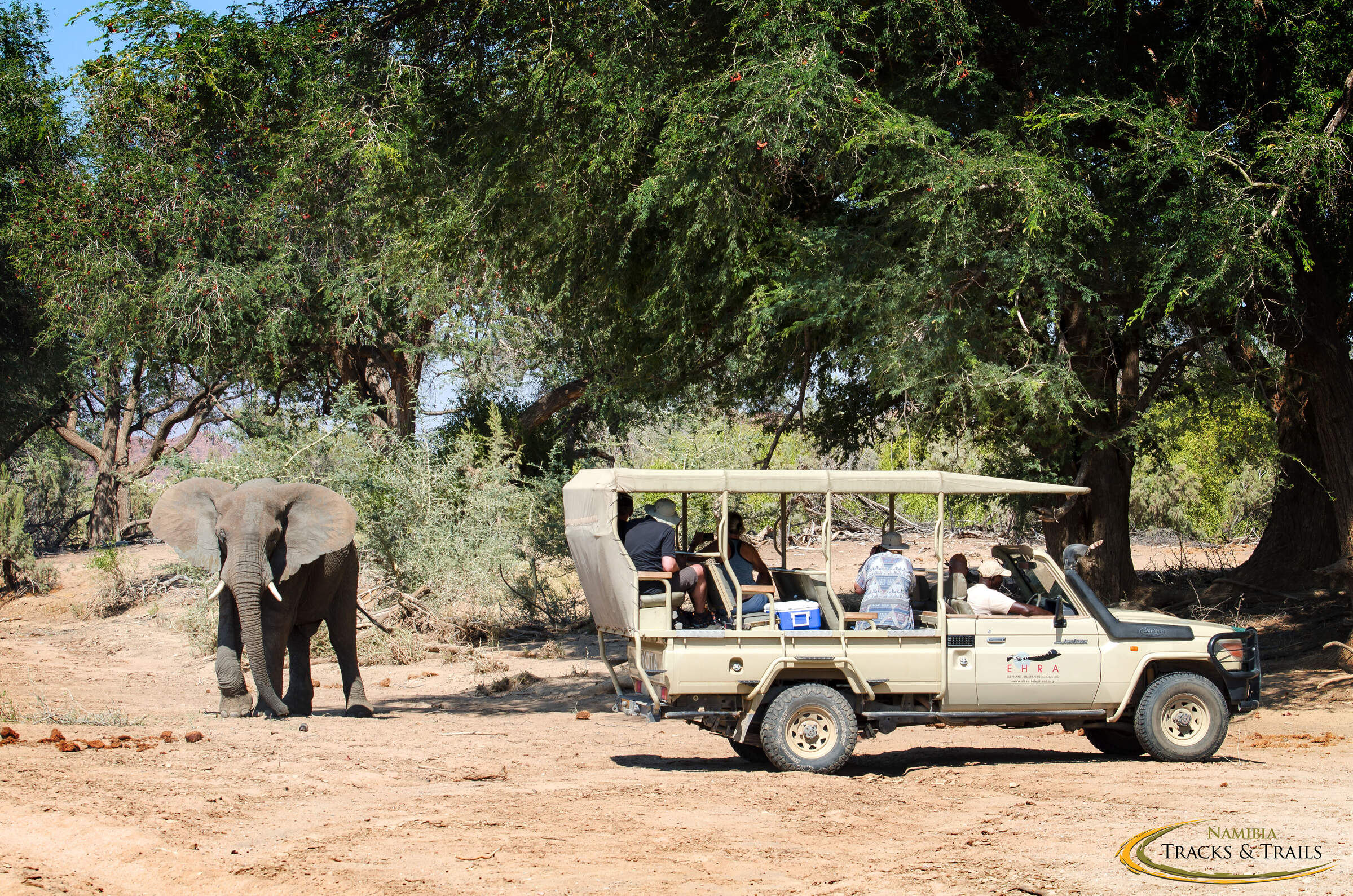 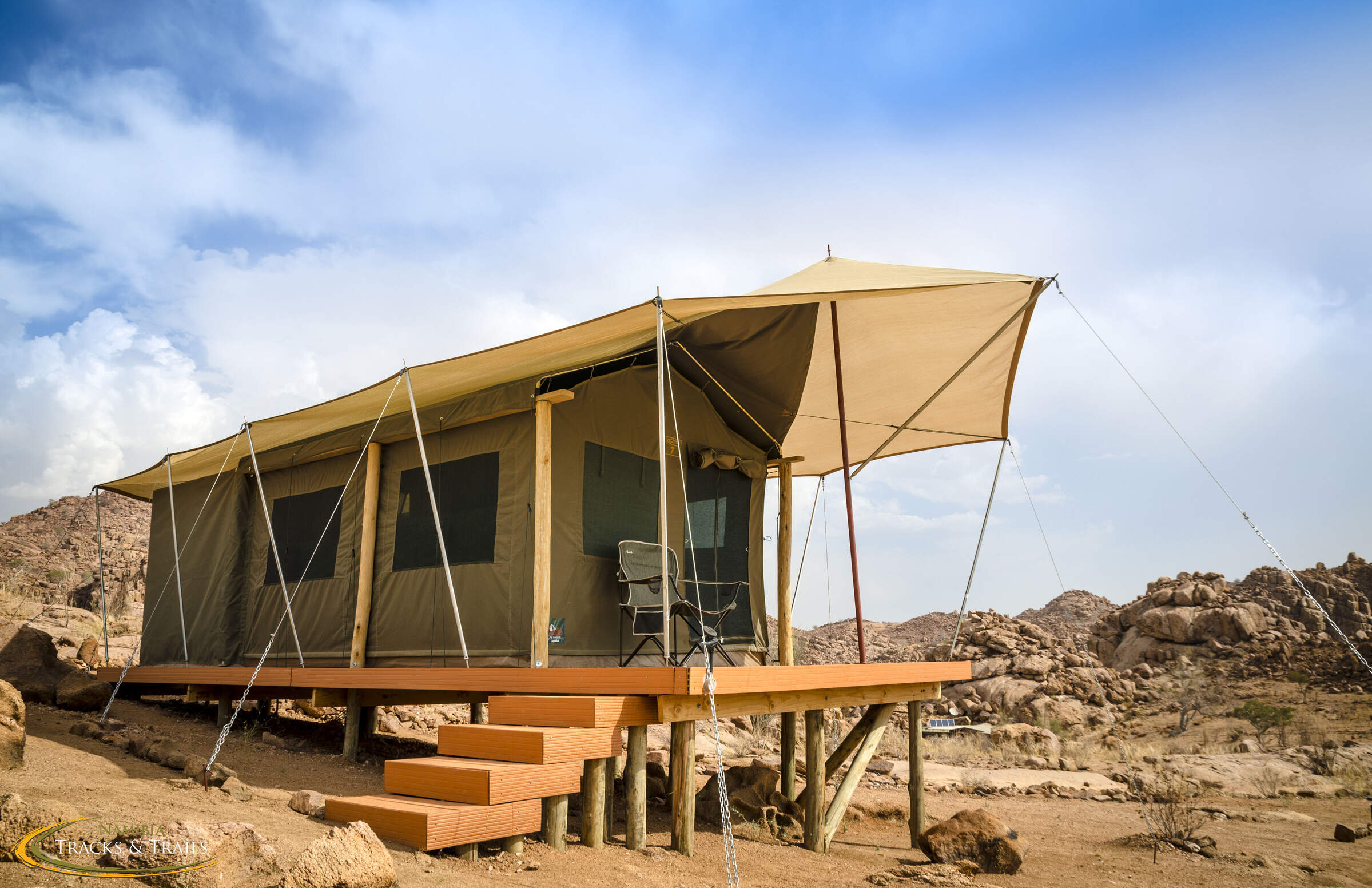 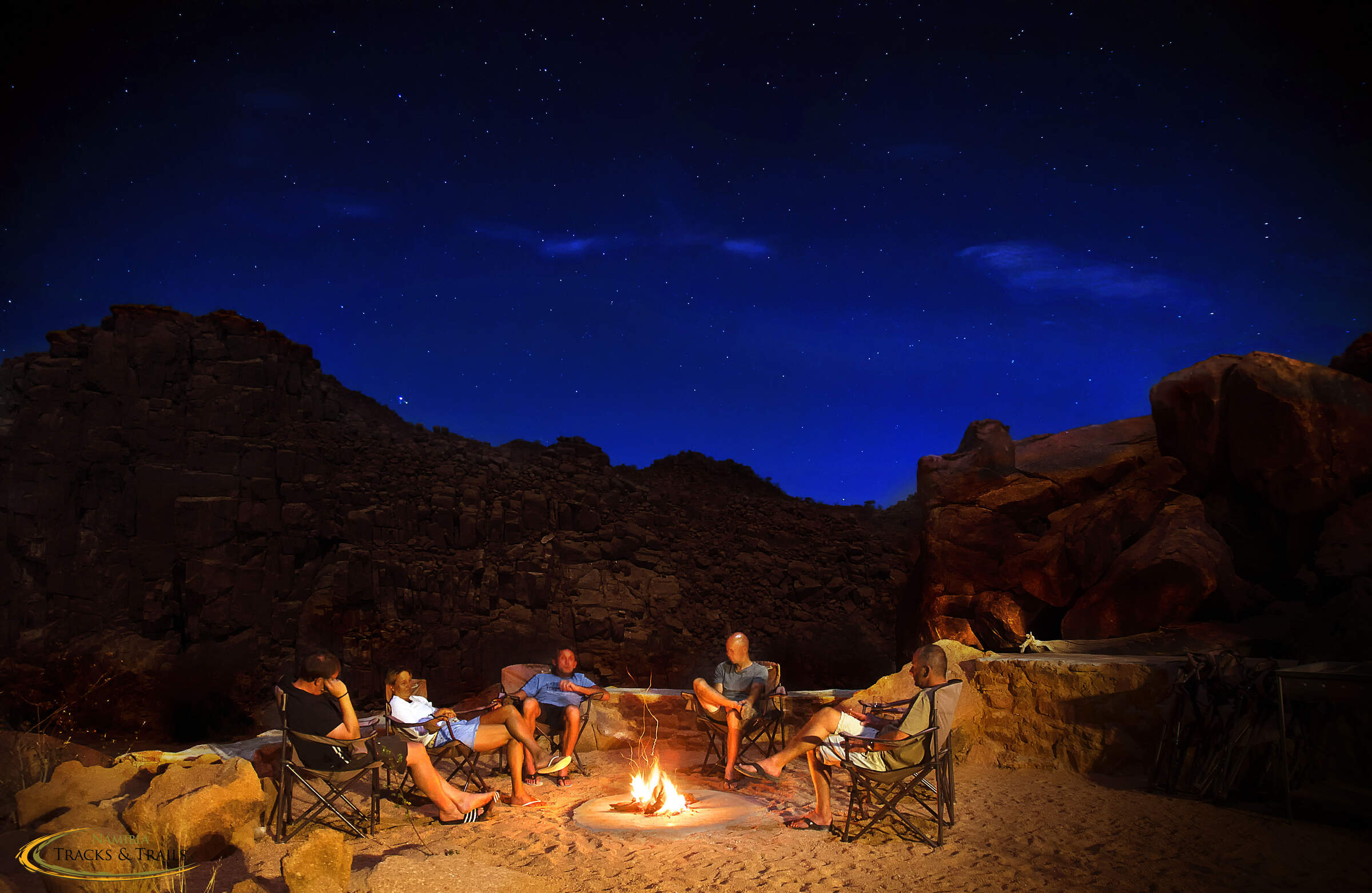 2 independent comments and wildlife information from our travellers who have visited Ozondjou Trails and kindly agreed to share their thoughts. They do not necessarily represent the views of Expert Africa

2 nights Arrived 22 May 2019
"Ozondjou Trails is in a stunning location on a spectacular rock outcrop overlooking a dry (when we were there!) river bed. From the main dining area you can sit and watch birds and dassies (including some super-cute baby dassies) hopping around on the rocks. The guest tents face the other way, into the setting sun, but also with a great view.

We arrived late as we had an extremely long drive all the way up from the airport (most guests seem to do this as a stop-off between closer places) and arrived after the afternoon activity(school and village visit) had departed; the only criticism of the service that I have is that the place seemed deserted - we had no trouble following the track up from the main road (it's closer to 50k than 40 from Uis by the way) and it was well signposted, but we were at a bit of a loss as to what to do when we got there! We found somewhere to leave the car and I think we were spotted wandering up the track to the camp, as the very nice & helpful Ruti then met us and showed us to our tent.

The food was good and the atmosphere at the camp very sociable once the other guests came back. The next day was the main event - the elephant tracking. We'd had a briefing about this from the EHRA guys the night before. The tracking is all from their expertise - in following tracks, knowing where the elephants hang out and also talking to the local people. Although Ozondjou itself feels very wild, it's actually in quite a populated area with lots of cattle, goats and donkeys around - which makes this quite distinct from the sort of safari experience you might get in Etosha - it's about seeing how elephants and humans can live in the same environment.

We had two good sightings of the elephants - firstly a single male eating seed pods (and shaking the tree quite impressively!) and then, after lunch, a lovely family group wallowing in mud, rolling around and generally rather enjoying themselves. This was clearly quite a regular location for them and it's right next to a little kopje - we were able to get out of the vehicle, climb up and get a terrific bird's eye view of the action from right above the elephants. The guides know them well and can tell you about the individual elephants and their stories.

The elephant tracking takes up the whole day and covers a lot of ground - so be aware that you will spend quite a lot of time in the vehicle and, as the focus is on finding the elephants, there's less going on between sightings than on a standard game drive. Make sure your possessions are well secured - it can get windy and with the vehicle sometimes travelling on bumpy surfaces, things can fly out - my sunhat managed to go missing at some point during the day!

Elephant sightings are not guaranteed - apparently the last couple of days they had not found them - but the expertise of the guides means you have every prospect of seeing these fascinating animals that have adapted to the desert conditions. Ozondjou would probably be of most interest to travellers who have been on safari before and want to see something that's a little bit different from what they may have seen in national parks - it is also good as a stop on a longer trip as it offers something quite distinct from the other lodges in the area. I would not recommend staying for less than two nights - the elephant tracking would not be possible - but as this is the only day time activity, you would not need to stay for longer." See all these reviews: 9n in Namibia
Experience Report
Overall Rating:
Good
Location:
Excellent
Service:
Good
Activities:
Good
Rooms:
Good
Food:
Good
Facilities:
Good
Sightings Report

2 nights Arrived 15 Jul 2018
"We didn't think it could get better but it did. Stunning location, superb team producing fabulous food in difficult circumstances.

All the staff teams at all the camps were brilliant but we all felt that this welcome was the most genuine, they really cared but without the suck up factor that was evident from the perhaps the Wolwedans team.

Sitting on the wall overlooking the riverbed with the baboons playing below as the setting sun turned the rocks a glowing pink will stay with me for a very long time. The fires that were lit to give us hot water were very clever.