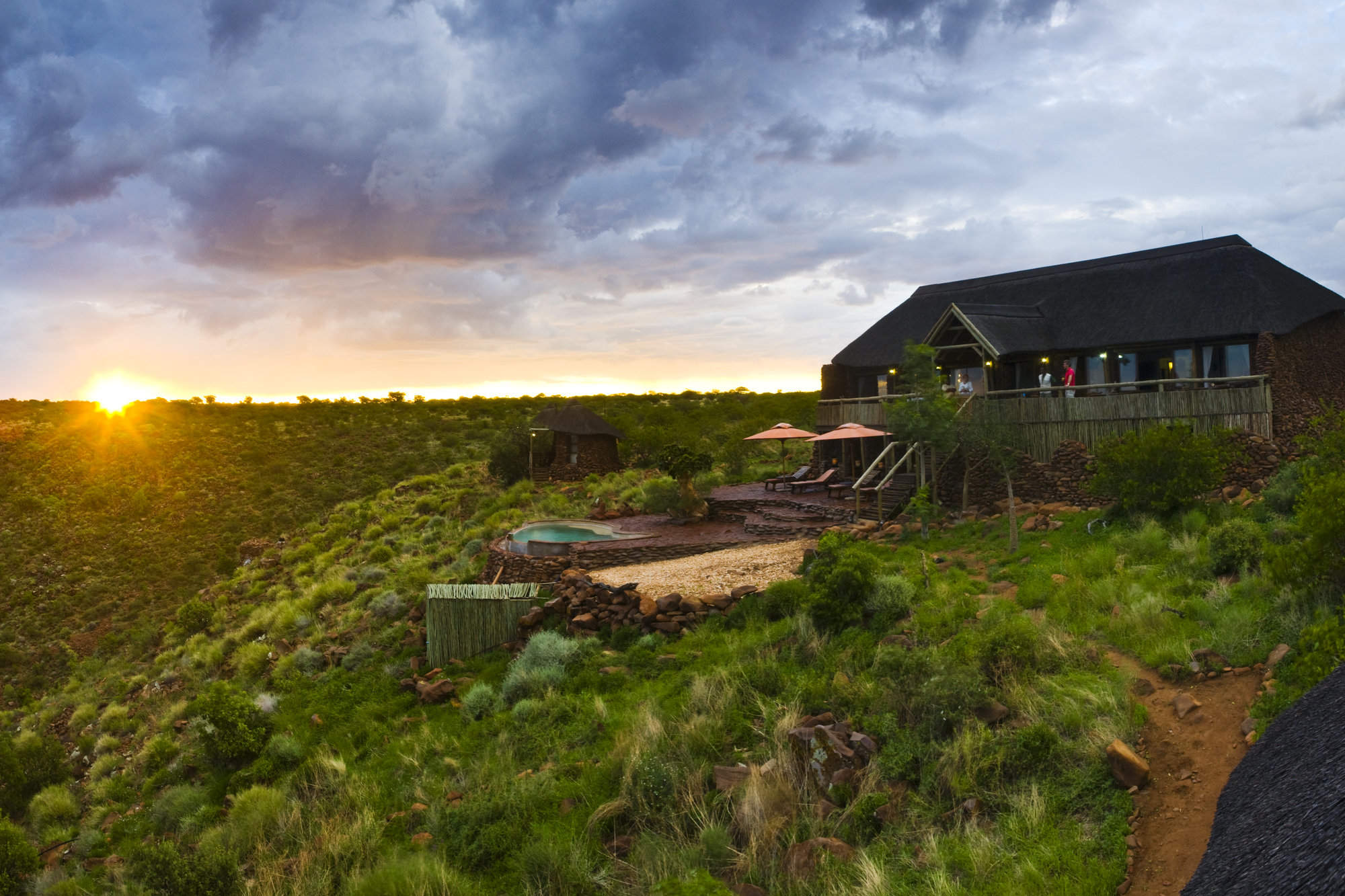 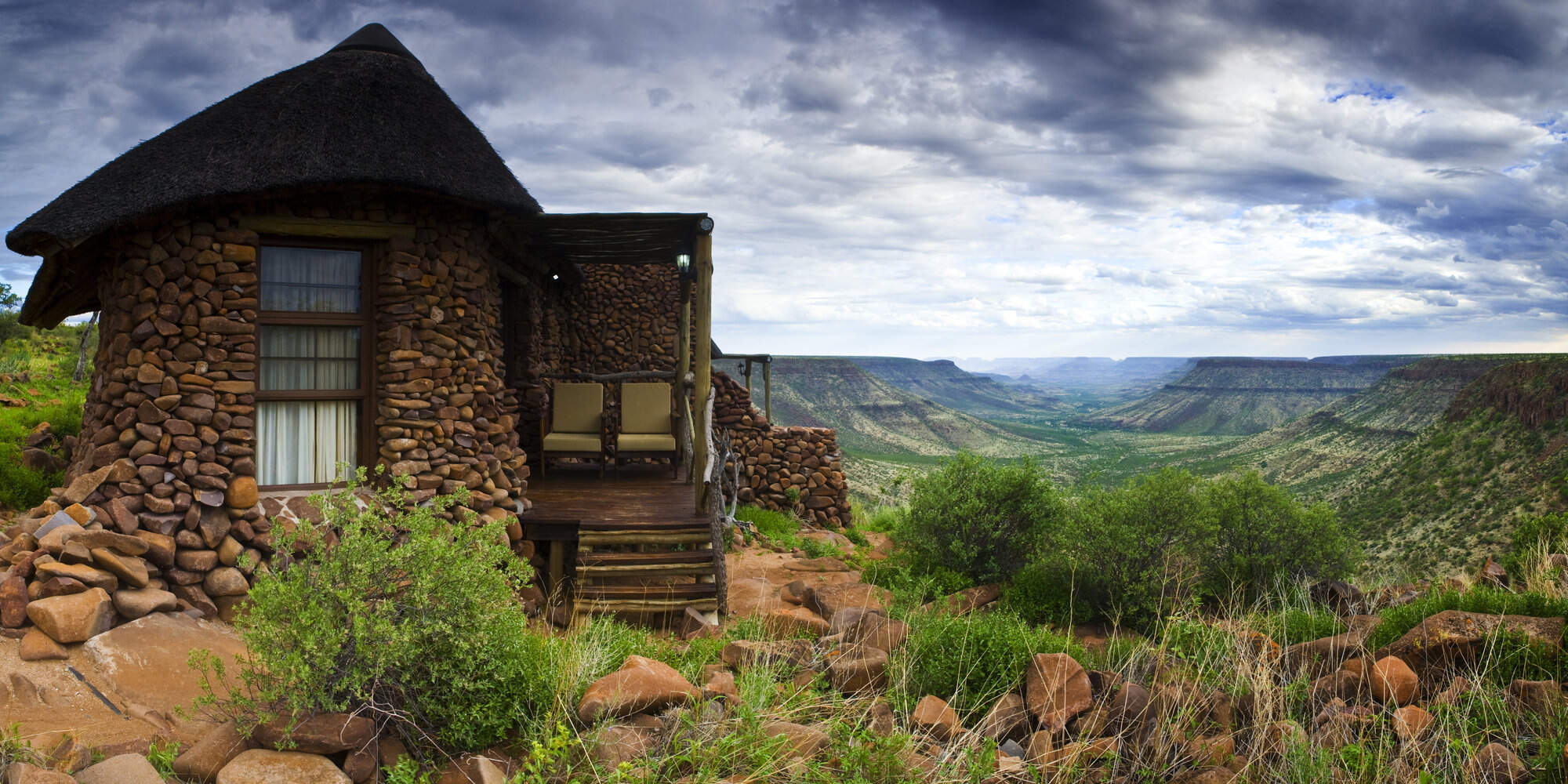 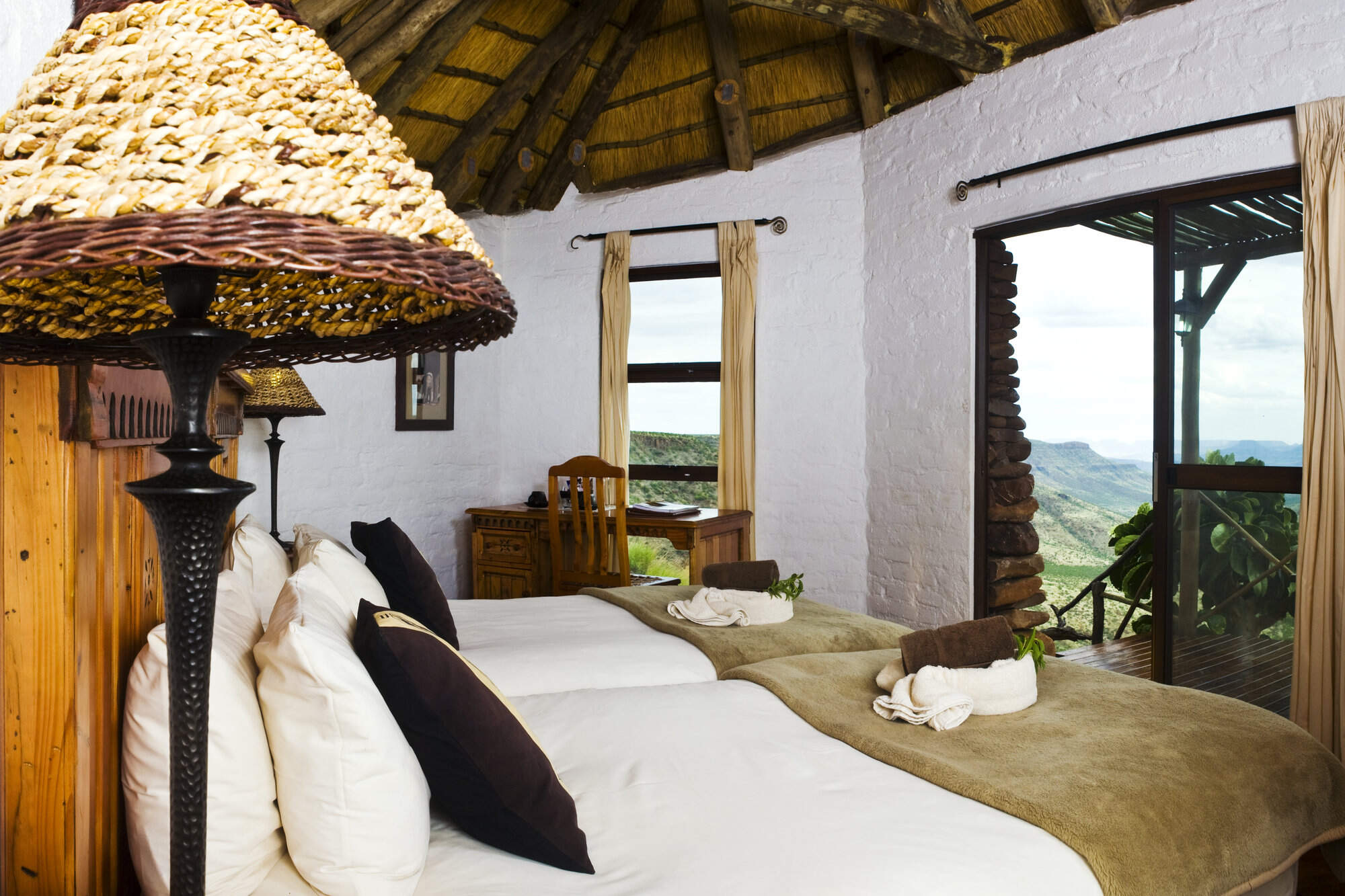 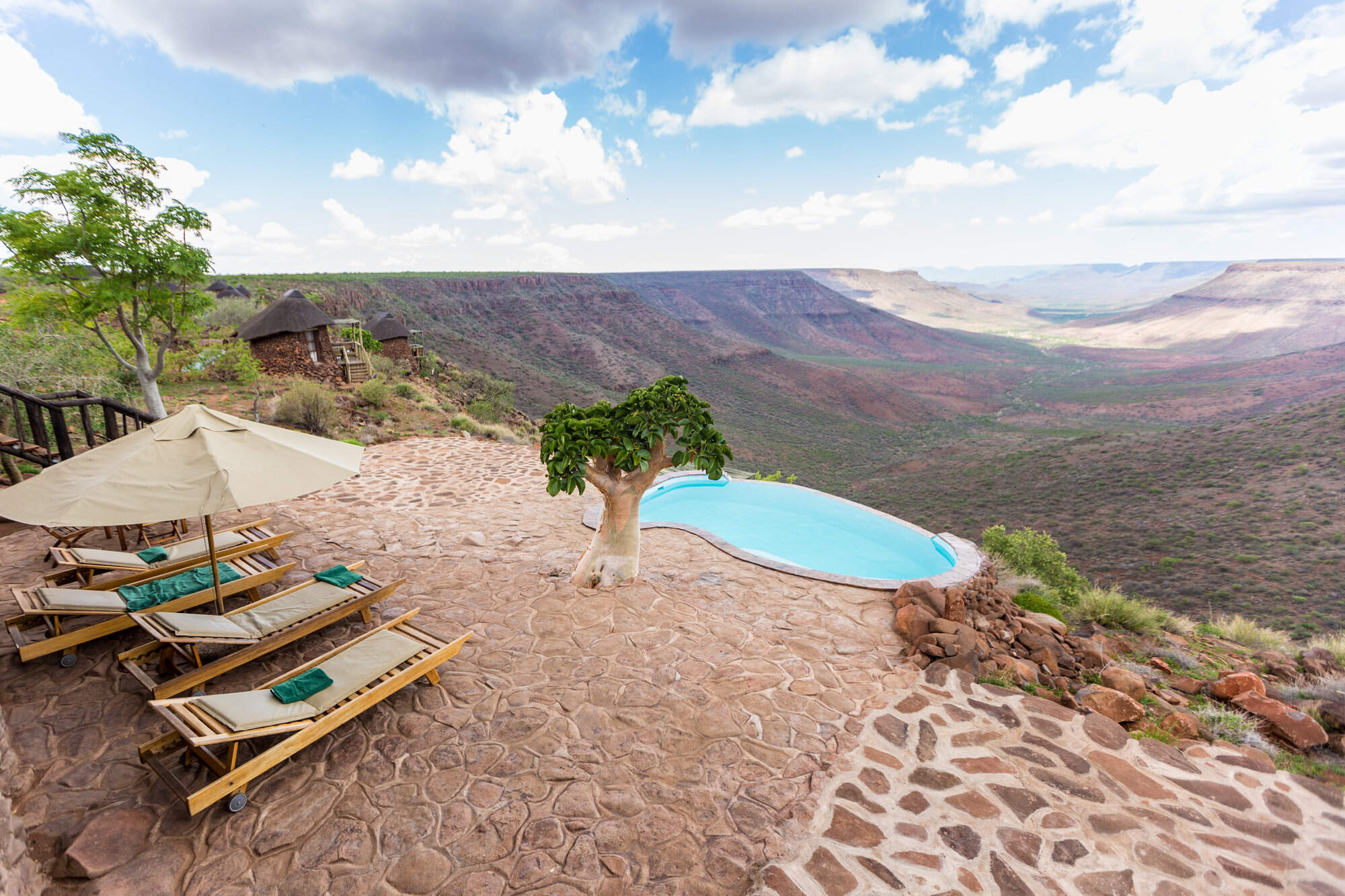 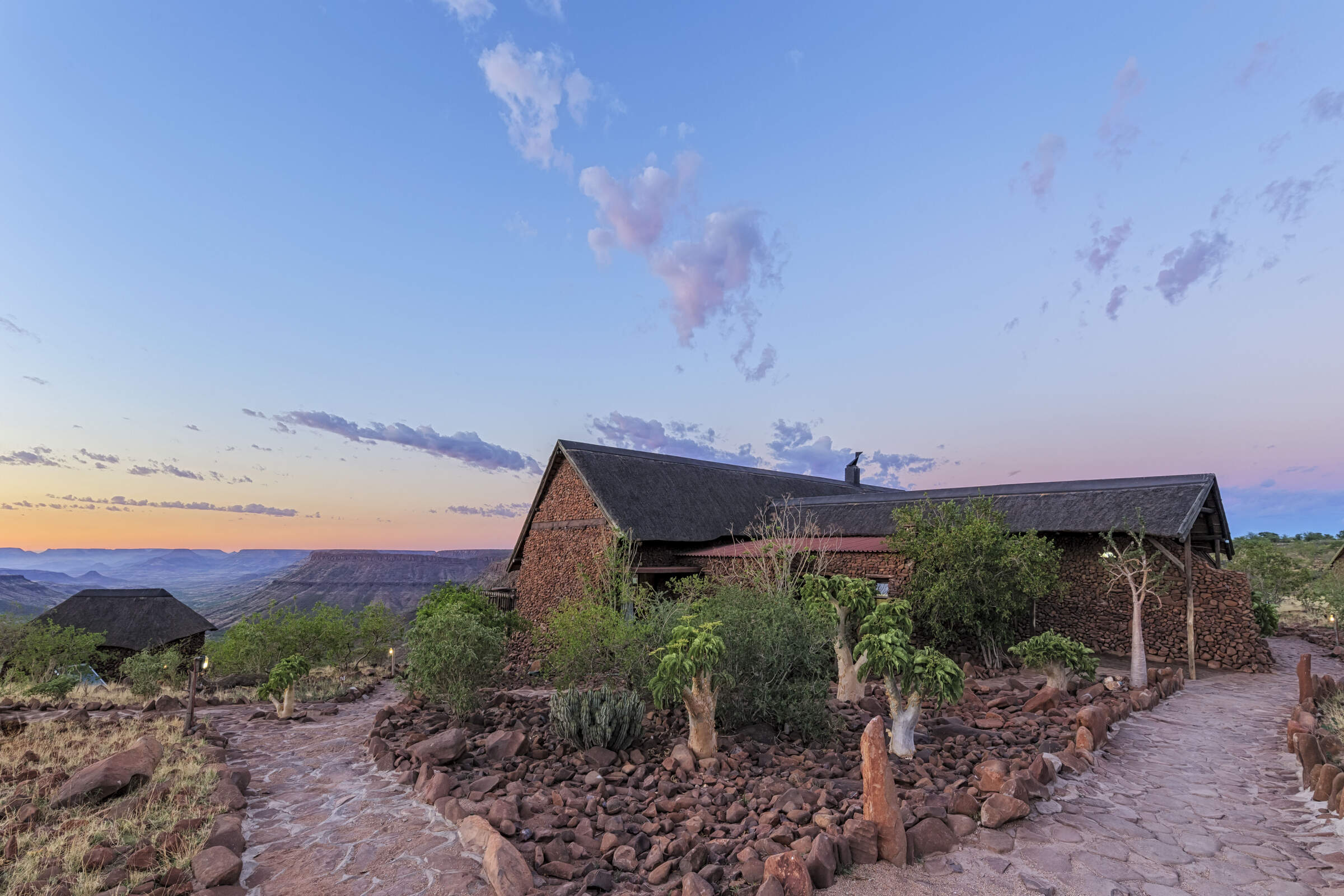 89 independent comments and wildlife information from our travellers who have visited Grootberg Lodge and kindly agreed to share their thoughts. They do not necessarily represent the views of Expert Africa

"Not recommended for rhinos"

2 nights Arrived 22 Oct 2020
"The lodge is functional rather than beautiful, although the views are excellent. Very good food. However, when we arrived they weren’t expecting us and didn’t have our booking. This wasn’t an issue as the lodge was empty (in fact we were the only guests on the first night), however, if they had been full then it would have been a problem!

We arrived too late for an afternoon activity on our first day, and had pre-booked rhino tracking for our second day (although, again, they didn’t have any record of this). The terrain here is extremely rocky, which makes for very bumpy game drives. I wouldn’t recommend it for anyone with back problems! We found the game to be very sparse and also extremely skittish – the fact that trophy hunting was done here until very recently certainly shows.

We drove for around 3 hours before reaching the target rhino area, where our tracker (only one – I got the feeling there were supposed to be 2 or 3 of them, but it was rhino tracker change-over day, where one set of trackers go in and another come out) searched for several hours to find fresh tracks, but with no success. For most of this time we were just sitting in the jeep waiting, which got extremely dull after a while. If we had known in advance that this is what it would be like we would have taken a book to read! We found out later on that they have had a big problem with poaching over the last few years, and they are now down on only 5 rhinos, so your chance of seeing them isn’t very high.

Also no power sockets in the rooms, so you have to charge devices in the main area. No wifi. The pool was empty. In general the lodge staff are friendly and helpful (especially the assistant manager Silvie)." See all these reviews: 18n in Namibia
Experience Report
Overall Rating:
Average
Location:
Excellent
Service:
Excellent
Activities:
Terrible
Rooms:
Average
Food:
Excellent
Facilities:
Poor
Feedback Response
From April-Nov 2020 visitor numbers to Namibia were exceedingly low thanks to various Covid-19-related restrictions. During this time there was a rare and unfortunate miscommunication between the lodge and our team in Namibia – which resulted in the booking for these travellers not being confirmed.

So when they arrived at Grootberg, the lodge was not expecting them. The team at the lodge did their best under the circumstances, but the pool hadn’t been filled and their rhino-tracking activity was far from the usual standard that we’d expect.

We’d have expected the rhino tracking to be a long and bumpy day, on rough rocky tracks. However, with a full complement of rhino-trackers from the community we would have expected the expedition to be more interactive and more successful.

We’ve apologised to these travellers in a very tangible way.

3 nights Arrived 19 Mar 2020
"The location of Grootberg Lodge is really magnificent. It must have one of the best views of any lodge we have stayed at anywhere.

The rooms have the same views (being perched on the cliff edge). They are compact but comfortable. No power in room but masses of charging points in a cupboard in the main building.

We had pre-booked the rhino tracking and spent a full bone shaking day with guide Dessie and trackers Joseph & Jacob.

It took serious tracking skills to find a male black rhino. We personally didn't actually have to walk far at all. We also went to the anti-poaching camp and chatted to the policeman which was interesting.
Saw mountain zebra, lots of giraffe, oryx, and large ele herd at end of day.

"place with the best view"

Heavy shower ruined excursion, but benefited everything else. Very steep drive up the mountain. Lodge provides transfer service.up the very steep entrance, which wasnt mentioned in the notes provided by Expert Africa. I spotted it in the guide book so we were prepared for it.

2 nights Arrived 19 Sep 2019
"Fantastic view from rooms.
Excellent staff who took time and great care to ensure our puncture problem was taken care of while we were out for the rhino day.
Very commendable!!!

1 night Arrived 9 Jun 2019
"Interesting drive up to the lodge but a magnificent view from the lodge (and pool) when we got there.

Very good evening meal. Staff were helpful and friendly. Arrived too late for us to do activities so saw no animals there.

Other guests reported zebra sittings and there was evidence of that near the buildings in the morning." See all these reviews: 9n in Namibia; 5n in Botswana; 2n in Zimbabwe
Experience Report
Overall Rating:
Excellent
Location:
Excellent
Service:
Excellent
Rooms:
Excellent
Food:
Excellent
Facilities:
Excellent
Dune lover
London

2 nights Arrived 14 May 2019
"We thoroughly enjoyed our time at this lodge.

The staff were amazing and we loved the feel of it being a conservancy. It certainly felt as if the staff were all stakeholders in the venture. They took a personal interest in making sure that the guests enjoyed themselves and we were treated to an iced cake in celebration of our 40th Wedding Anniversary.

The only adverse comment we could make (although we feel it churlish when everything else was excellent) was that the design of the individual chalets meant that at night when the door was closed, they were rather airless making sleep a bit difficult. However, we would not cite this as a reason not to go there as our stay was so good in all other aspects.

We took a day out, rather than another animal safari, to take the Damaraland cultural tour (including visiting a school and a village) and would certainly recommend this to other travellers." See all these reviews: 16n in Namibia; 3n in Zimbabwe; 1n in South Africa
Experience Report
Overall Rating:
Excellent
Location:
Excellent
Service:
Excellent
Activities:
Excellent
Rooms:
Good
Food:
Excellent
Facilities:
Excellent
Sightings Report

2 nights Arrived 13 Feb 2019
"Adventurous location with amazing views of valleys and mountains. Good guides on driven and walking trips, but variety of game limited on the escarpment. More game down below apparently.

Impression that, as a community project if they were expecting it to be run by locals alone by next year, they were falling short of expected standards. Examples of poor maintenance." See all these reviews: 17n in Namibia; 2n in Zimbabwe
Experience Report
Overall Rating:
Average
Location:
Excellent
Service:
Average
Activities:
Good
Rooms:
Good
Food:
Poor
Facilities:
Good
Mrs J.
Sussex

2 nights Arrived 9 Oct 2018
"We opted to be driven up the steep approach to the Lodge. Not very attractive dining area with a very small sitting area for guests unless they go outside onto the terrace. The rooms were small with no fans or a/c (no electric points). The walking tour and biking could not take place because of lions near the property. We had to be escorted back to our cabins after dinner. The pathways were very uneven and treacherous, especially for someone who uses a stick. We took the afternoon tour around the plateau but it wasn't very interesting. Next day we went on the rhino tracking tour. We were told we would be collected from our cabin at 5.30am because of the lion, but no one turned up. Luckily our mobile worked and we were able to call reception but it made us late for the start of the tour. It was very long and, at times, unbearably bumpy. The trackers did find the rhino. Then a long bumpy drive back. The guides did not sit with us at lunch so we weren't able to ask all the questions that we had wanted to. Spectacular scenery and stunning infinity pool. Delightful staff who sang beautifully after dinner one evening." See all these reviews: 16n in Namibia
Experience Report
Overall Rating:
Average
Location:
Good
Service:
Average
Activities:
Average
Rooms:
Average
Food:
Average
Facilities:
Average
Sightings Report

Camp Onduli is a no thrills bush camp offering top-notch guiding in a remote wilderness area of Damaraland.