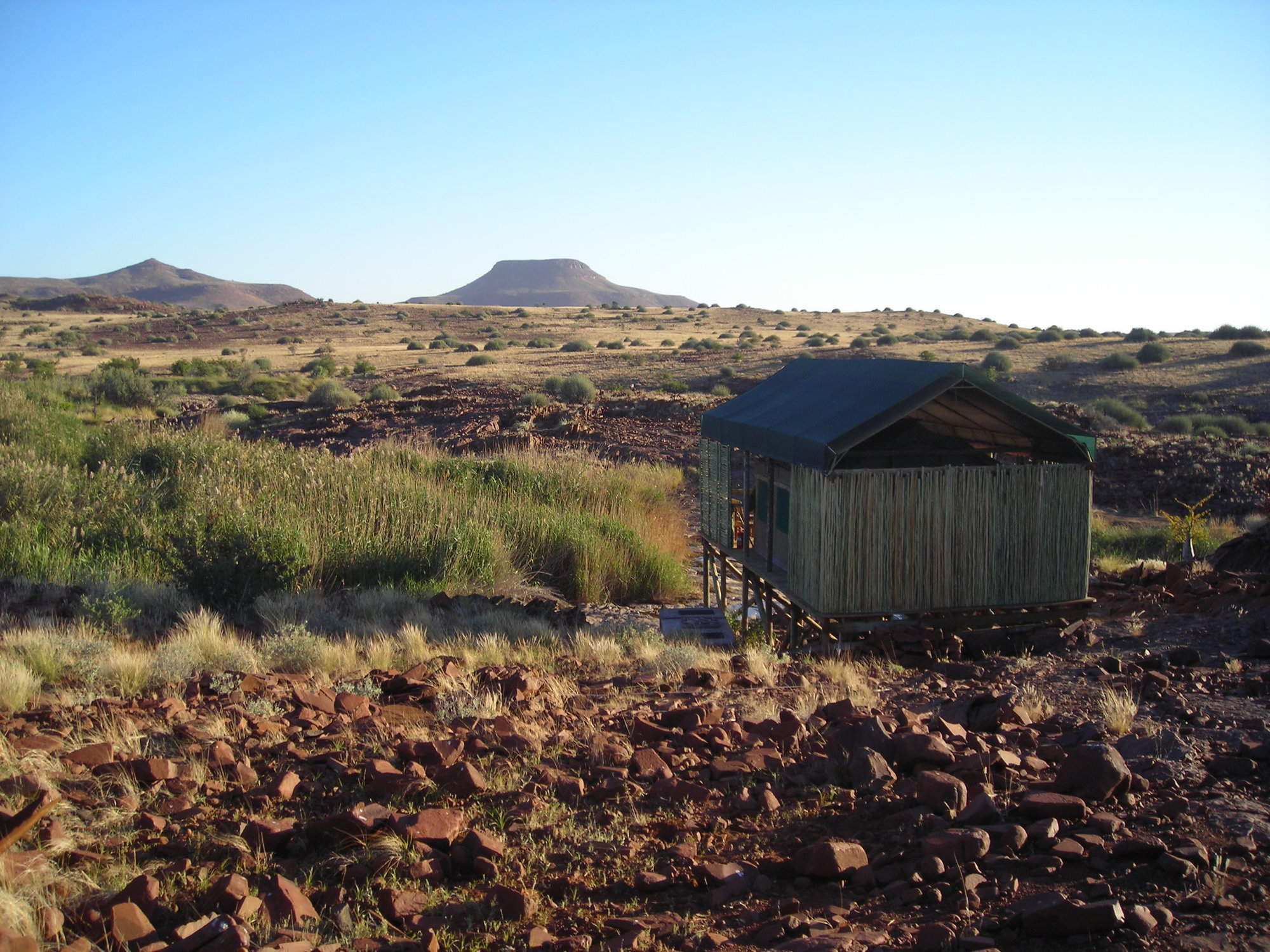 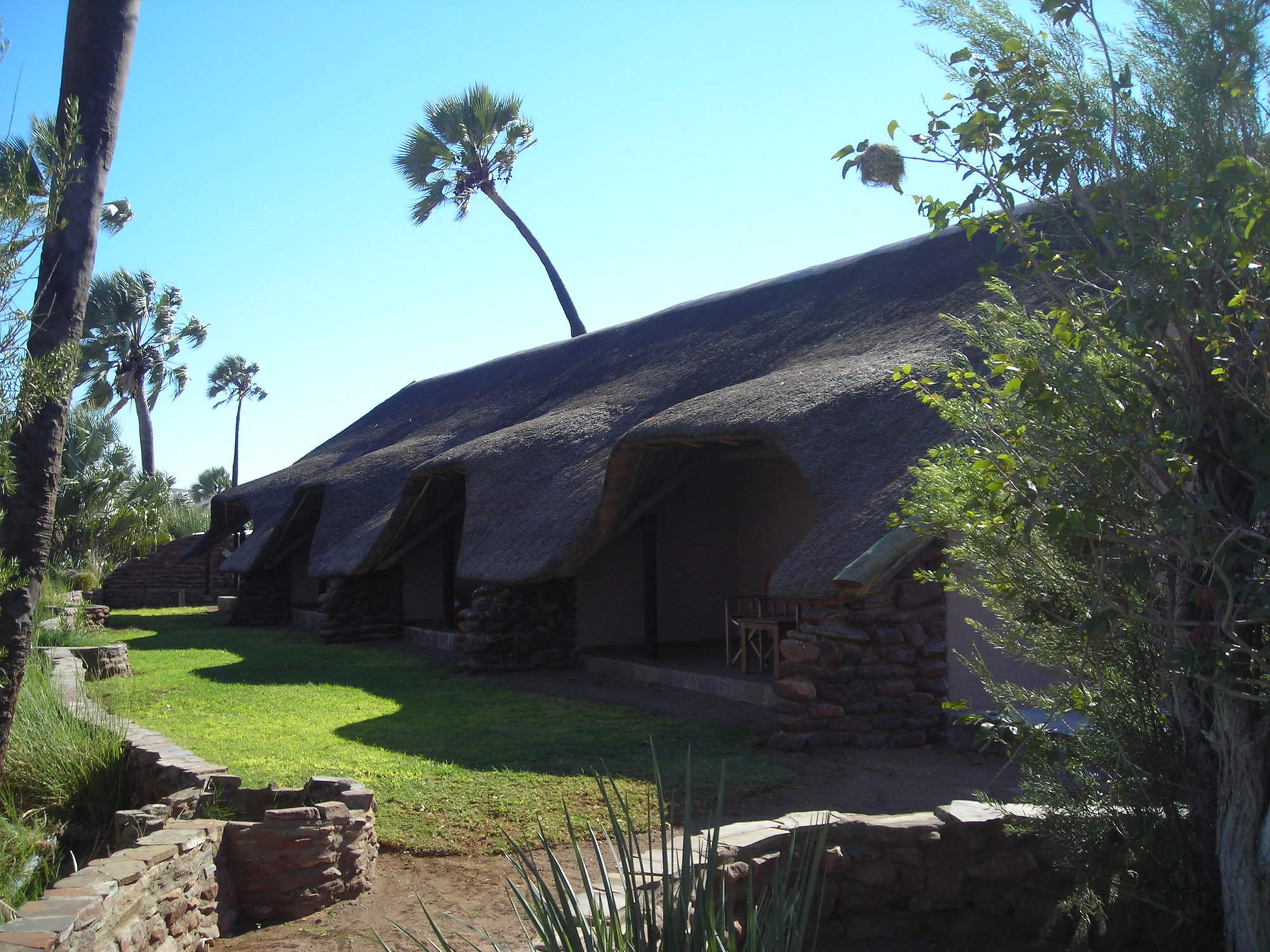 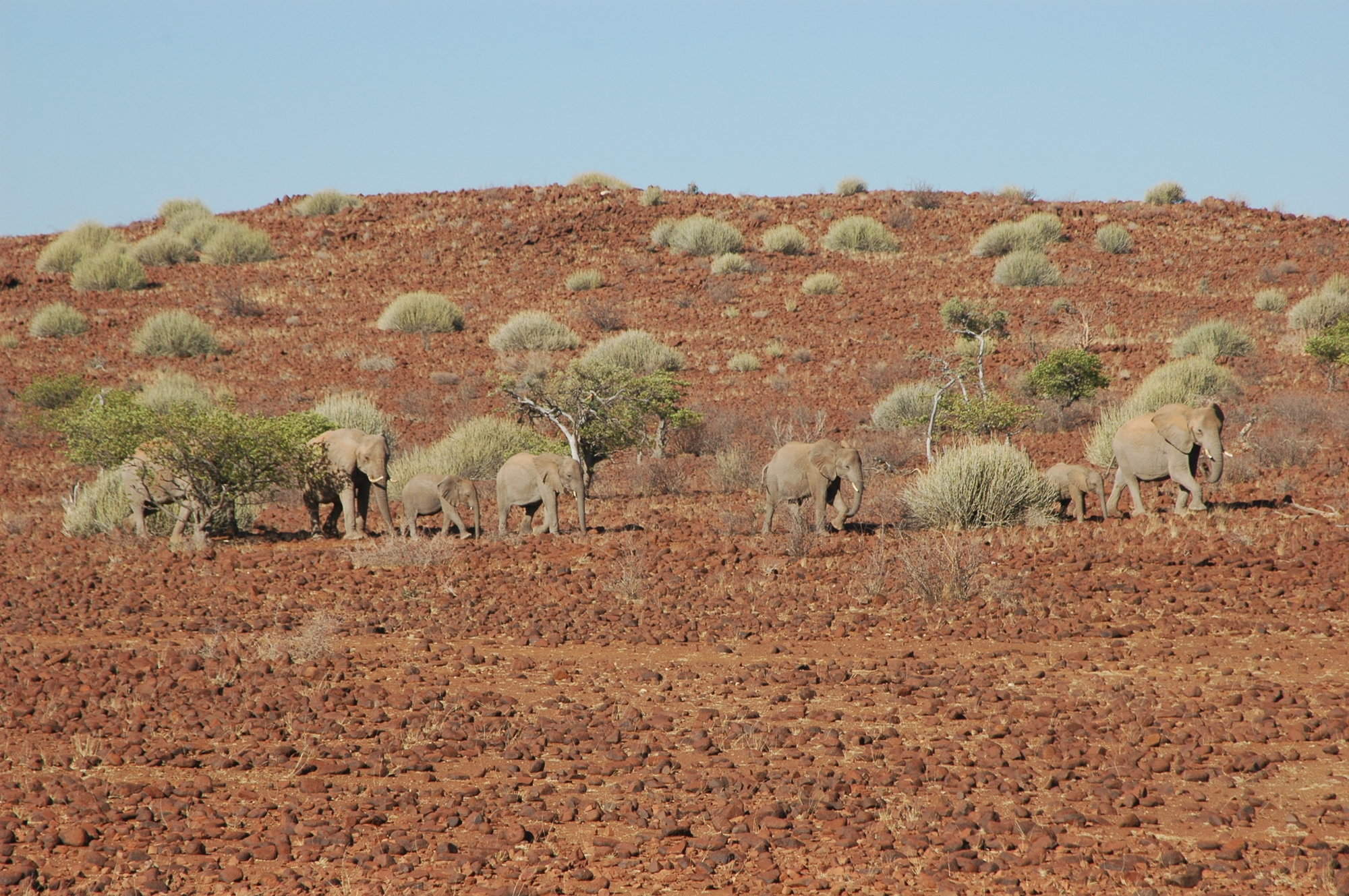 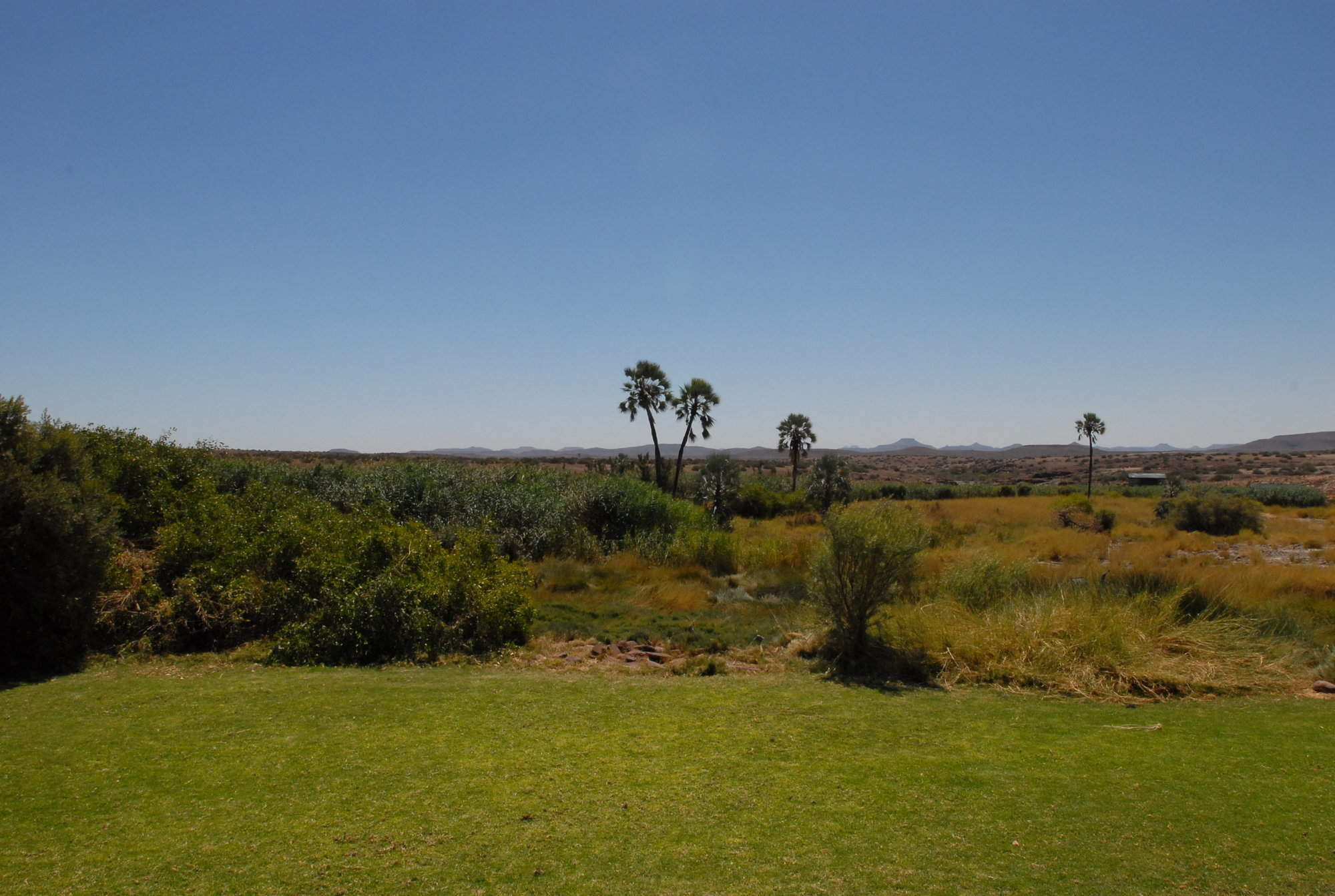 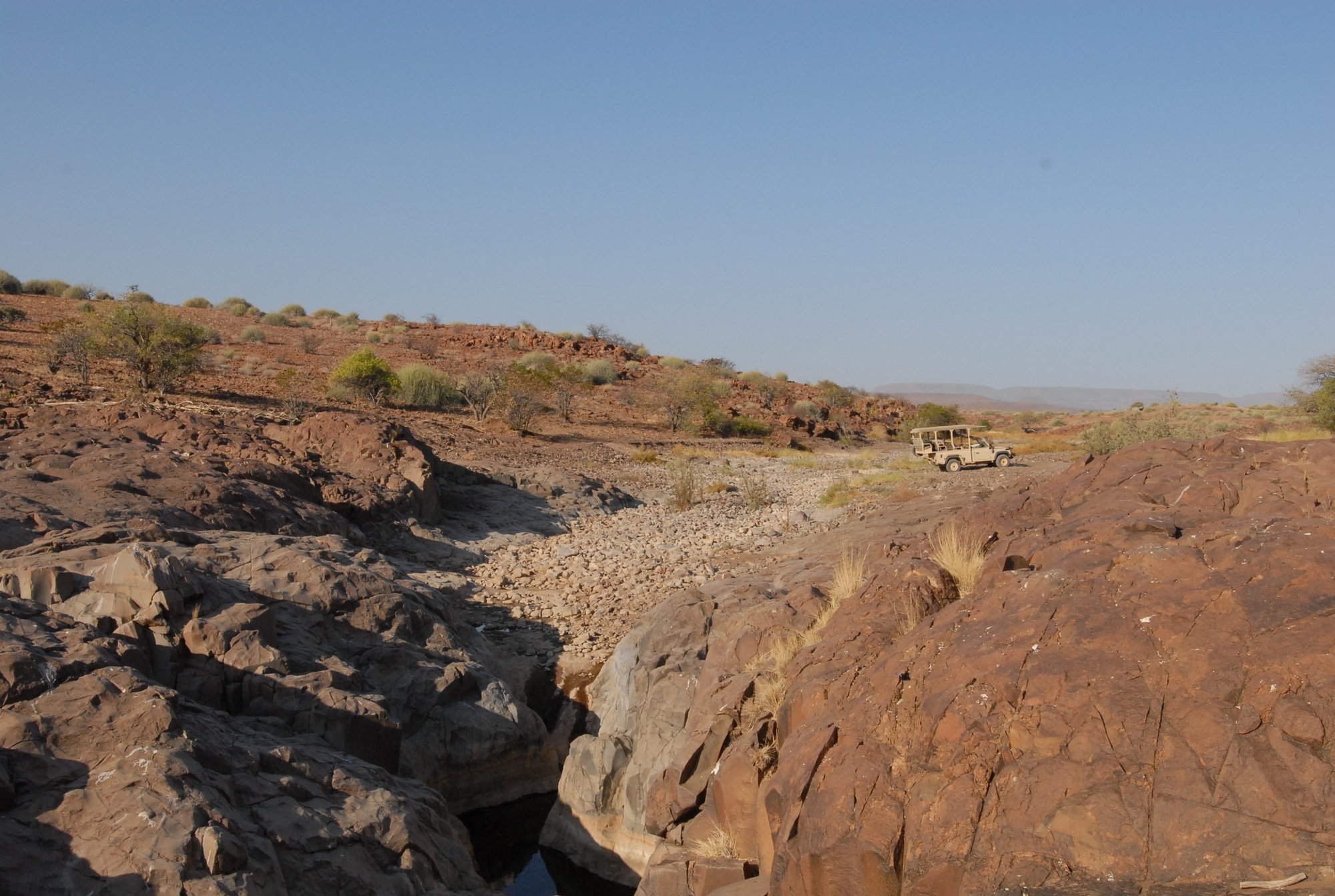 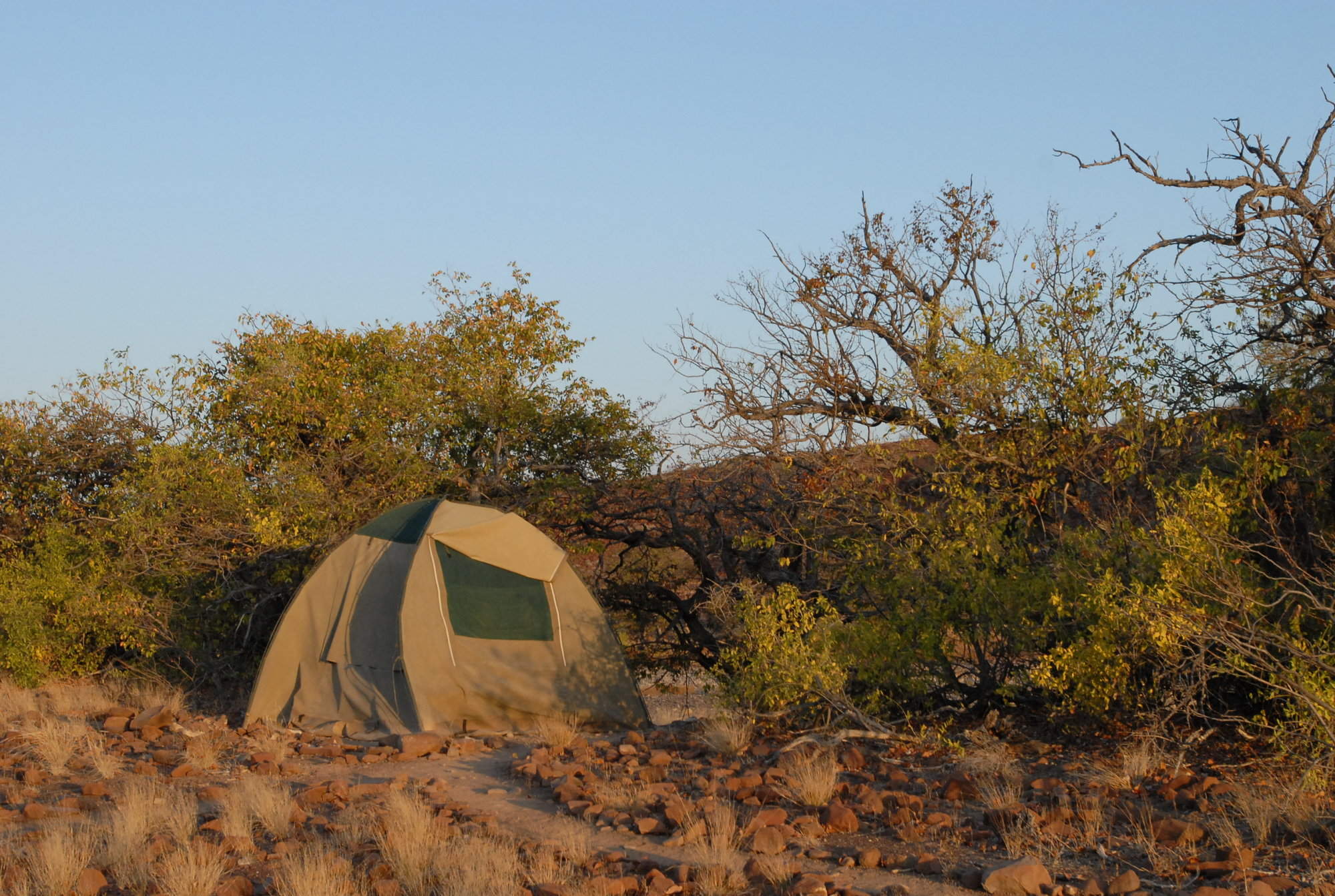 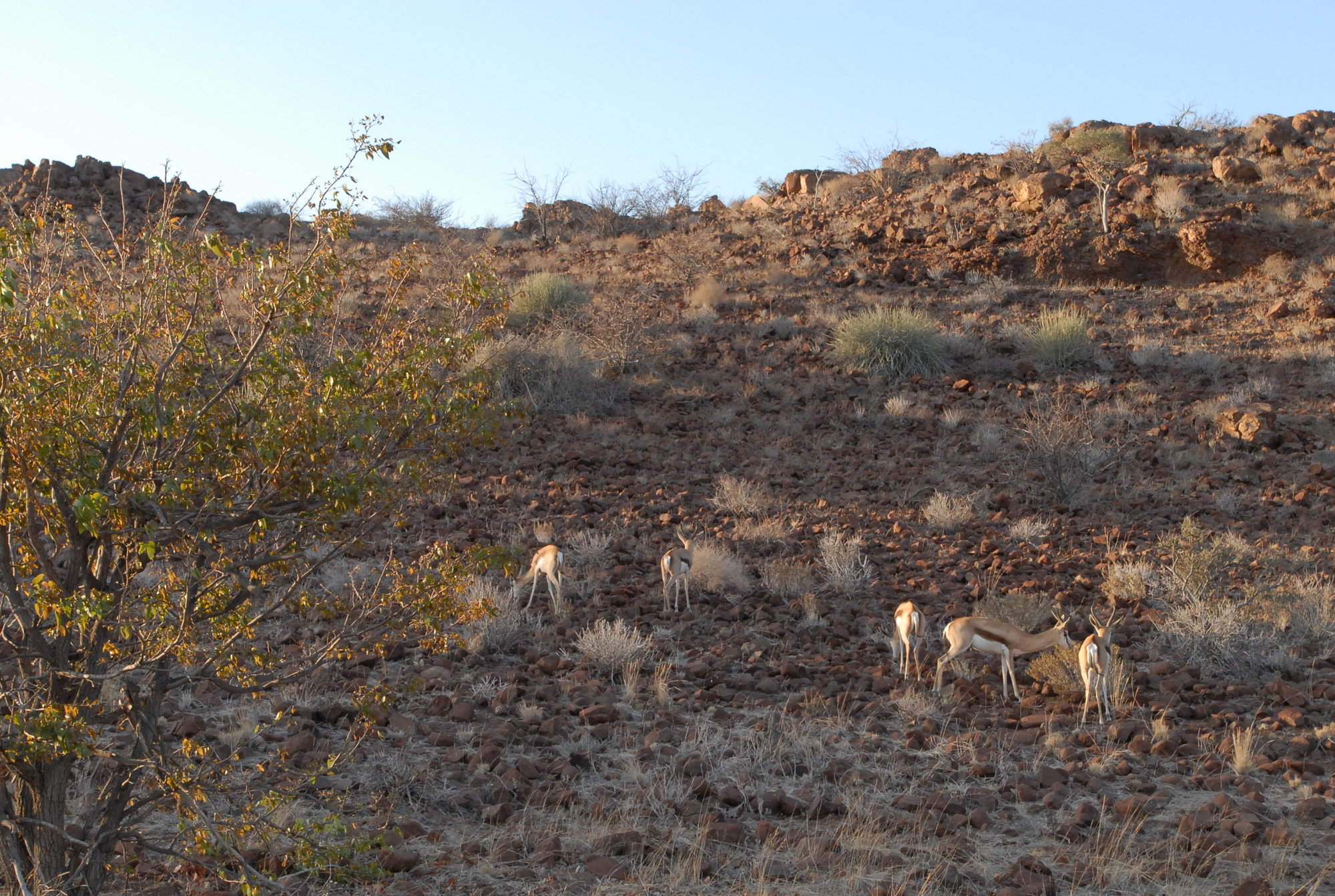 33 independent comments and wildlife information from our travellers who have visited Palmwag Lodge and kindly agreed to share their thoughts. They do not necessarily represent the views of Expert Africa

Overall a very good value option for a one night stay in the Palmwag area.

1 night Arrived 25 Sep 2019
"The lodge was fine but the fact that our booking was lost and we were left in the reception area for an hour spoilt the experience there.

The staff were pleasant enough and sympathetic but didn't really seem to know what was going on. They said the mistake came from the take over by the lodge but this was last May
Not sure whether the booking had been reconfirmed before we went but this needs addressing at Palmwag before other guests go there in future.

The room we were given was one of the old ones and not the standard of the new tented rooms we had been booked for, as particularly the bathroom needed a bot of rejuvenation. However, if our Namib Tracks and trails guide and driver hadn't kindly given up one of their rooms we would have had no room at all." See all these reviews: 12n in Namibia
Experience Report
Overall Rating:
Poor
Location:
Good
Service:
Poor
Rooms:
Average
Food:
Good
Facilities:
Good
Feedback Response
Expert Africa are very sorry to hear that Palmwag Lodge seemed to have ‘lost’ these travellers reservation – this is not the level of service we expect at all. We made the booking with Palmwag Lodge 11 months prior to the stay, and then also sent a reconfirmation just prior to travel. We do this on all reservations, as standard, to ensure that everything in order for our travellers’ holiday. We are investigating fully to find out what happened and to try and ensure this does not happen again. We sincerely apologise for the inconvenience that this caused these travellers.

"Average to good, but only option."

1 night Arrived 2 Aug 2019
"Actually, we like this oasis in the desert, that we have visited three times by now (2009, 2012 and 2019). Nice little pools (two), OK restaurant, tyre repairs, and fine tents by the riverbed. Also, an elefant visiting. On the bad side, very large groups (overland) trucks are also present. They easily dominate the restaurant as in our case the had a table with approx. 20 chairs in the middle of the room. The service in the restaurant was not of very high standard compared to the price tag for this place. The location is fantastic and you don´t really have other options. Slow internet, but works." See all these reviews: 21n in Namibia; 2n in Botswana; 2n in Zambia
Experience Report
Overall Rating:
Average
Location:
Excellent
Service:
Average
Rooms:
Excellent
Food:
Average
Facilities:
Good
Mr M
Stockport

2 nights Arrived 20 May 2019
"Afternoon tea forgettable if you managed to get a cake/biscuit from them.

Most staff very happy and polite. Reception seem to tell most people you have not paid for your special activity when you arrive tired from a long drive, but finally retract when challenged.

Location fine, did see the resident elephant, who had been missing for 2 days!

Rhino trek enjoyable, lucky enough to see three including a baby. Apart from a couple of antelope in the concession only saw two giraffes on drive back.

Room comfortable but rather warm in the afternoon, as no air conditioning.

Food surprisingly good given some reviews. Special offers on wine we enjoyed on our second night.

Road there is in a terrible state, took extra 15 minutes driving back, and still got a puncture(albeit only discernible at the next lodge)" See all these reviews: 9n in Namibia; 3n in Botswana
Experience Report
Overall Rating:
Good
Service:
Good
Activities:
Excellent
Rooms:
Average
Food:
Good
Facilities:
Average
Sightings Report

"An oasis of green and calm"

1 night Arrived 11 Sep 2018
"Another lovely welcome to the camp by the staff, and a comfy, spacious room looking out into green gardens surrounded by palm trees. Very relaxing after dusty drive...the pool was delightfully chilly but nice to sit beside with a book for couple of hours." See all these reviews: 10n in Namibia
Experience Report
Overall Rating:
Excellent
Location:
Good
Service:
Good
Activities:
Good
Rooms:
Good
Food:
Good
Facilities:
Good
Sightings Report

1 night Arrived 19 Aug 2017
"Only stayed one night - on sleep-out, for a bit of excitement for children.

Hardest part of the trip with kids due to time in car, roughness of roads, three single night stays in a row. Would have been better if we could have stayted somewhere longer. Even in hindsight though, given where we wanted to go, what we wanted to experience and time constraints, would do the same again. Definitely not a relaxing few days though!

Arrived at main camp by lunch - very pleasant pool area, bar etc. Basic sandwiches available. Camp a bit 'functional' rather than special. Staff did what they needed to, but little more. Camp very accessible to wildlife though - desert elephant walking through.

Sleep-out experience and associated game-drives not entirely as billed - left camp later (16:00) and returned earlier (09:30) but this was largely due to wind and lack of game as a consequence. Camp 3x 2-person tents with simple mattress and sleeping bags. Plenty of room to put 2 kids + 1 adult in one tent, which we did. Would not really recommend kids on own due to separation of tents open to dangerous game - although this is permitted.

Dinner cooked on fire + plenty of salad and cold drinks brought in cooler boxes. Could hear lion (a few km off) and hyena (nearby) as soon as sun went down. Hyenas in camp during night and again as we were getting up at 6am.

Great drive back to main camp - for scenery rather than game, although we did see giraffe, oryx, duiker etc.

Guide was brilliant at spotting game but english was a bit of a struggle at times. As a consequence, he was unable to really engage kids and it was a bit difficult throughout to understand what was going to happen next.

Overall, this was a good experience which eveyone enjoyed but it was more memorable for doing it, rather than what we saw or the engagement with the guide." See all these reviews: 16n in Namibia
Experience Report
Overall Rating:
Good
Location:
Good
Service:
Average
Activities:
Good
Rooms:
Good
Food:
Average
Facilities:
Good
Feedback Response
As of 21st August Expert Africa were made aware, by our team in Namibia, that the gravel roads are becoming increasing bumpy and continue to deteriorate, especially in areas around Damaraland and Sossusvlei. This is due to the lack of funds to support the costs of grading the roads. The roads used to be graded on a fairly regular basis and hence kept in good condition but unfortunately they now haven’t been done for some months with resulting ill effects on the road conditions. We hope that things will return to normal shortly.

2 nights Arrived 22 Jun 2017
"Found Palmwag fractionally less satisfying than some of the other lodges despite ravishing scenery. Game drives lengthy and relentlessly bumpy due to the bouldery terrain, and somehow the camp out seemed unnecessary despite the great guide i.e. many hours of driving for a similar view with slightly less wildlife than the lodge itself. Possible just had spent too long in the vehicle to spend so much more time in the vehicle there...." See all these reviews: 18n in Namibia
Experience Report
Overall Rating:
Good
Location:
Excellent
Service:
Good
Activities:
Good
Rooms:
Average
Food:
Good
Facilities:
Good
Mr M
Cambridge

2 nights Arrived 13 Nov 2015
"A great location but very much caters for large groups.

1 night Arrived 10 Sep 2015
"We just stayed one night in between different sections of our holiday. The lodge is fine in all aspects but without any characteristics (that we discovered) that make it stand out.

It caters (when we were there) for group tourism with buffet-style dinner." See all these reviews: 10n in Namibia
Experience Report
Overall Rating:
Average
Location:
Average
Service:
Good
Rooms:
Good
Food:
Average
Facilities:
Good
Showing 1-10 of 33
1234
Next
82%
33 reviews of Palmwag Lodge by travellers since August 2007
Overall rating by our travellers
13
13
4
3
0
Filter by month