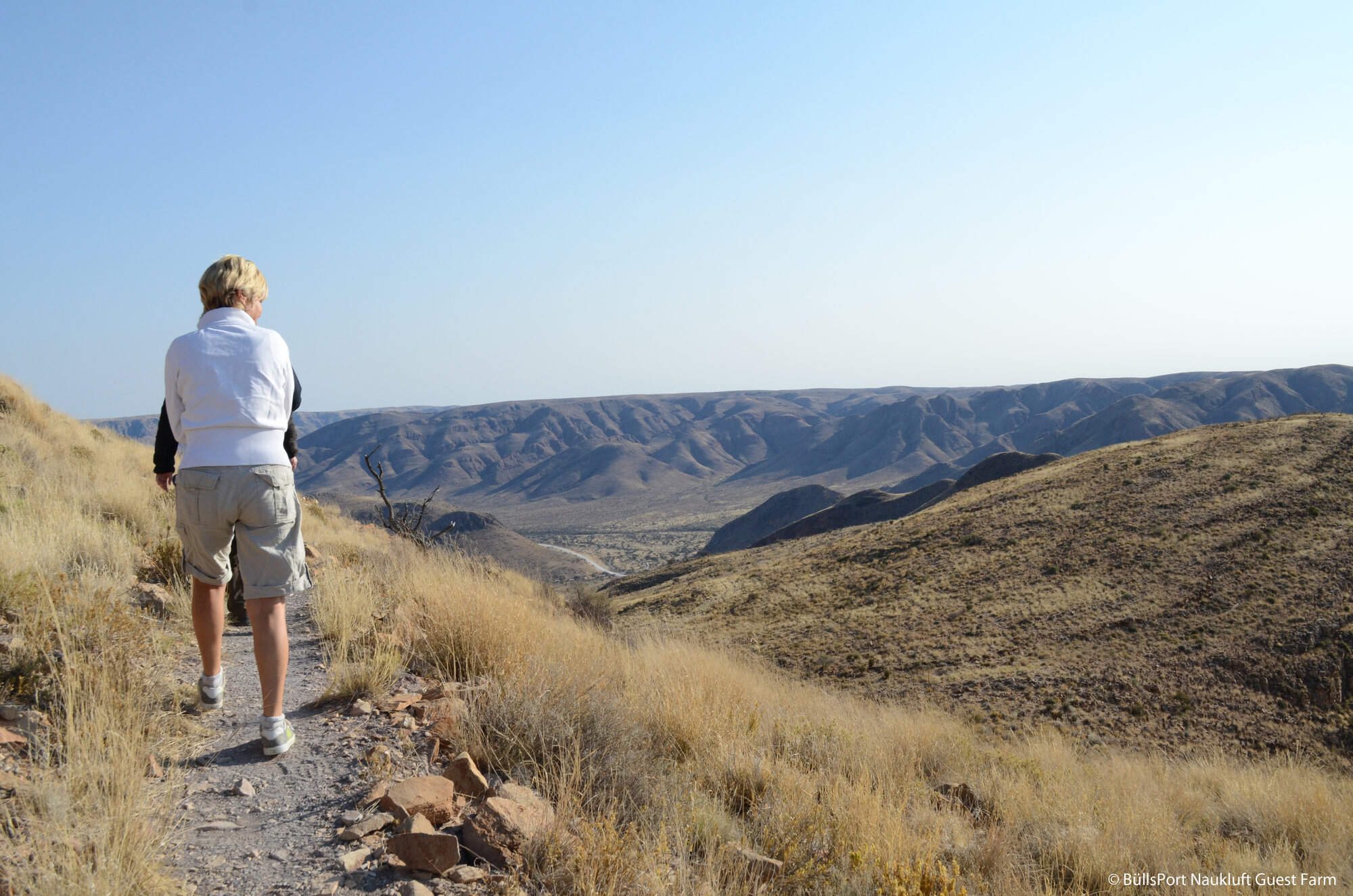 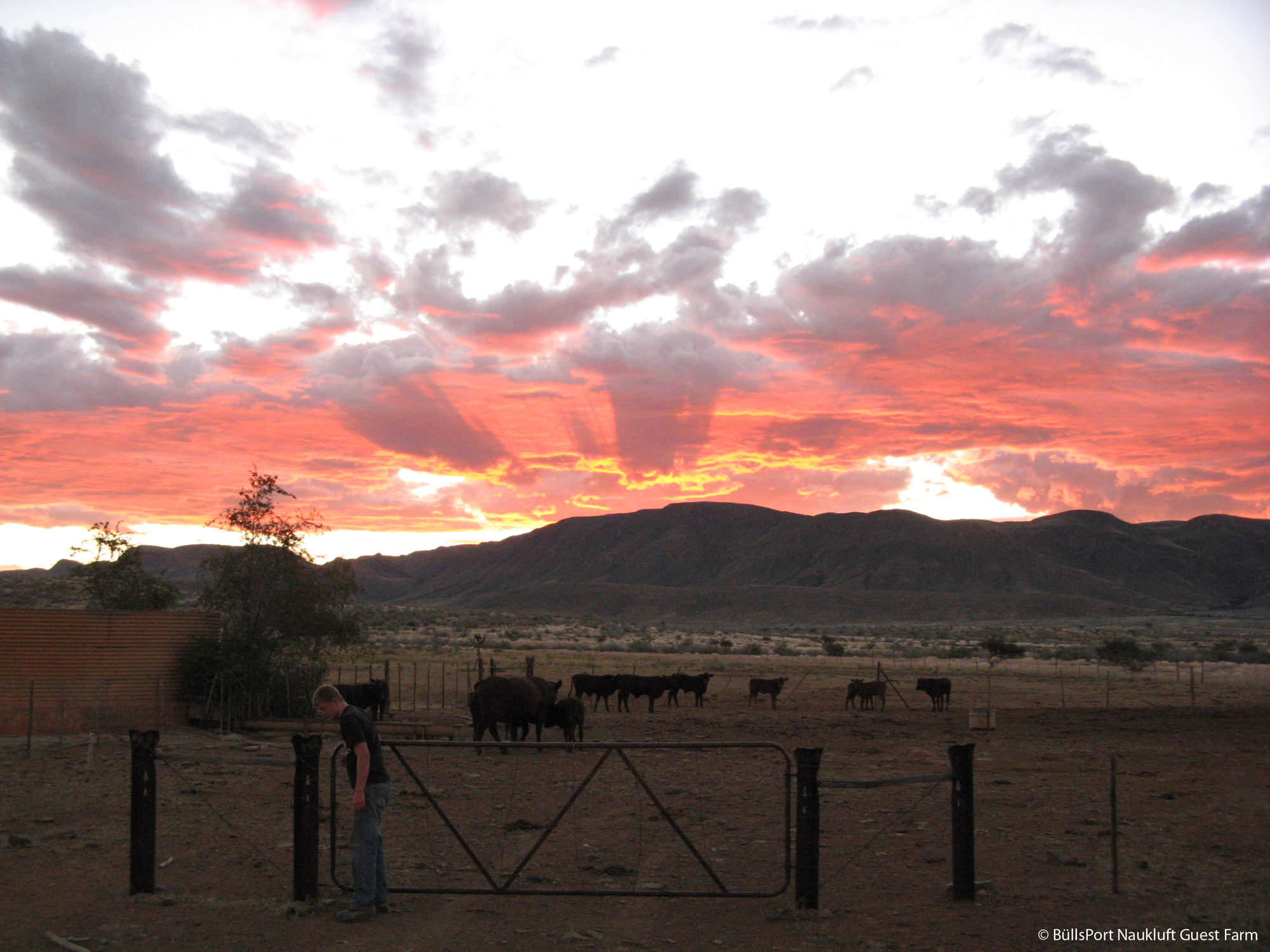 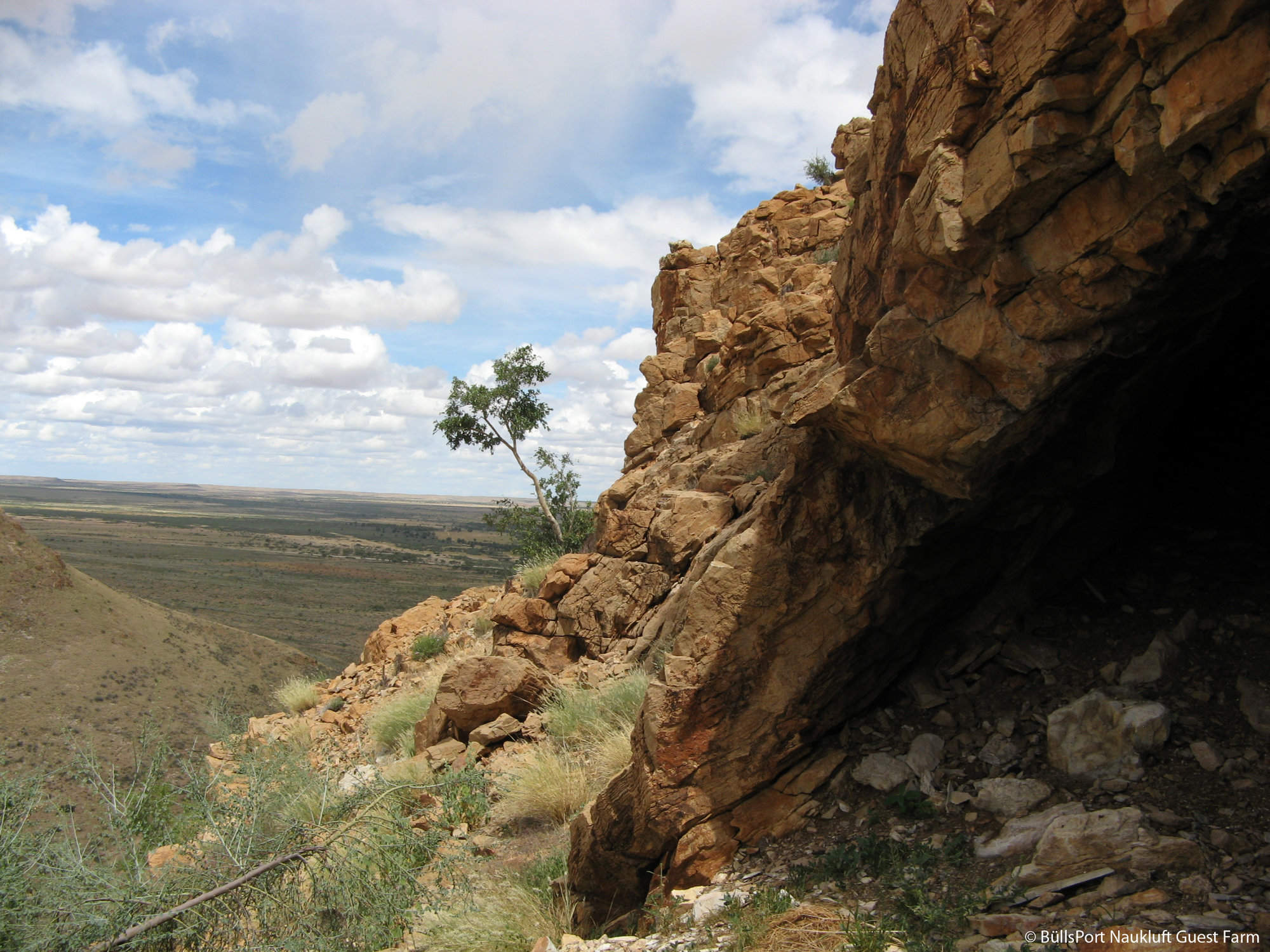 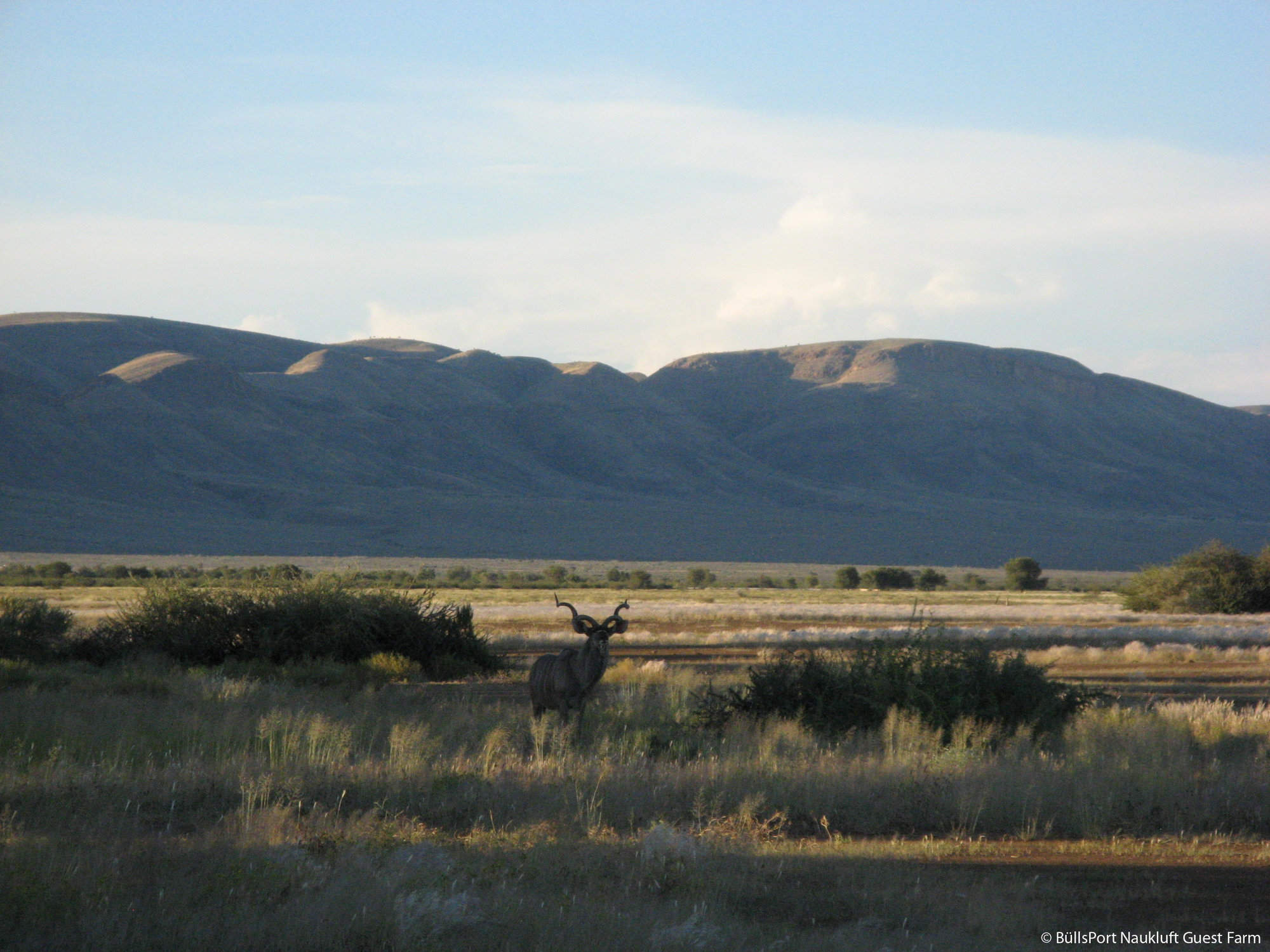 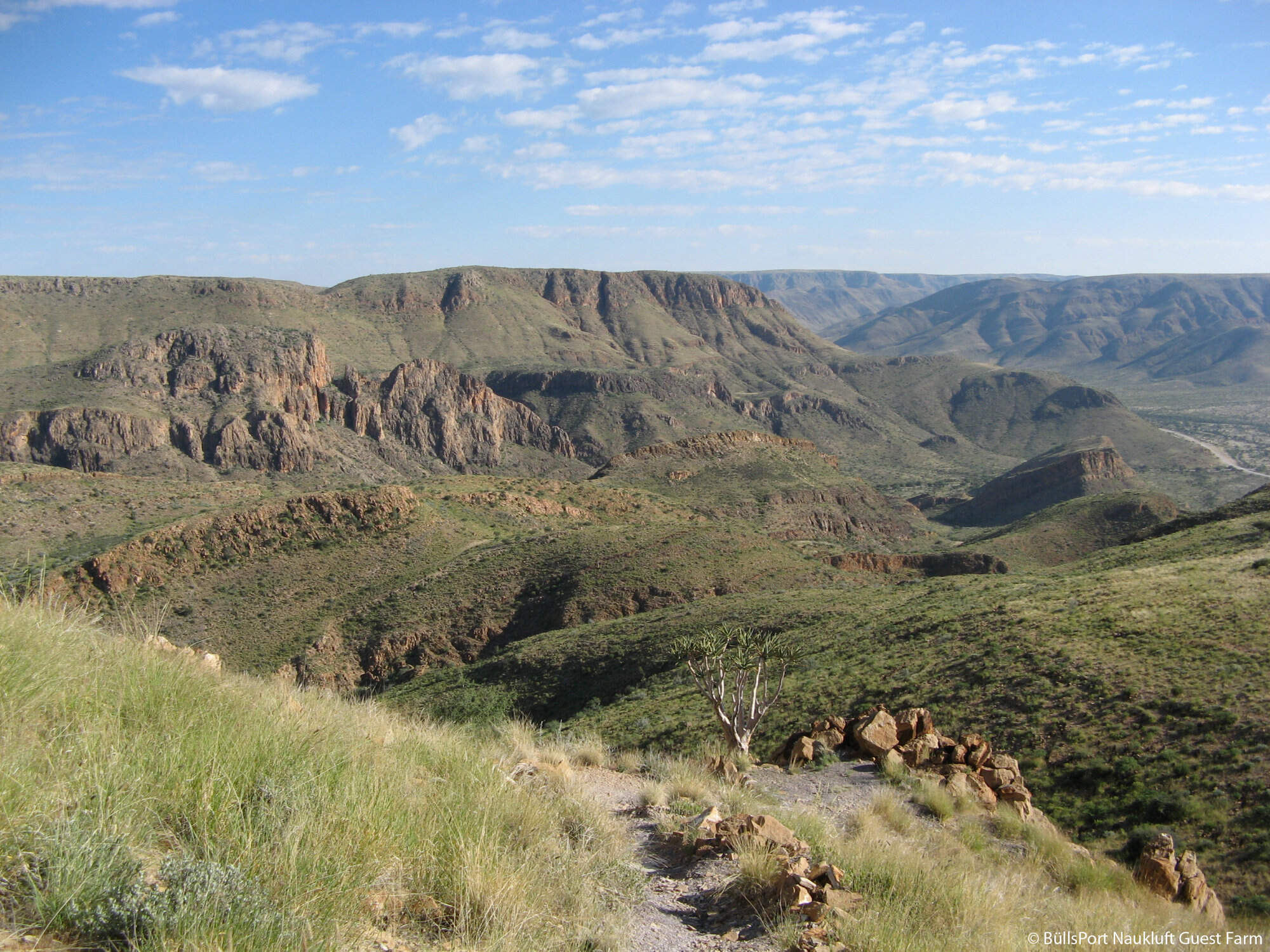 175 independent comments and wildlife information from our travellers who have visited BullsPort Lodge & Farm and kindly agreed to share their thoughts. They do not necessarily represent the views of Expert Africa

2 nights Arrived 26 Oct 2018
"Took walks and one game drive with young man, Jonathon, who worked there but was actually raised on a nearby local farm. Great information about farming/ranching in Namibia.
Hiked the Quivertree Gorge Trail, over 5KM, also went horseback riding.

"A great place to say"

3 nights Arrived 11 Sep 2018
"This was the highlight of the trip though 3 nights was sufficient.

The activities were interesting, the rooms comfortable and everything was well organised.

1 night Arrived 6 Sep 2018
"Excellent location for walks and many on offer with the Farm.

Meals were excellent with the added bonus of one large communal table eating with the owners giving the ability to learn about their life in Namibia, problems of living in a remote area and being a fabulous way of getting guests to intermingle!!!

2 nights Arrived 26 Jun 2018
"Made to feel welcome. We enjoyed meeting and talking to the family members and staff.

1 night Arrived 7 Jun 2018
"Lovely introduction to Namibia as it was our first stop out of Windhoek.

Simple but comfortable accommodation. Very friendly owners and helpers. Great home cooked food.
We saw the mountain zebra on one of our walks but only through binoculars.

Our stay wasn't long enough to do any of the guided activities. We did borrow mountain bikes to ride round one of the flat trails which were all well marked." See all these reviews: 14n in Namibia
Experience Report
Overall Rating:
Good
Location:
Good
Service:
Excellent
Activities:
Good
Rooms:
Good
Food:
Good
Facilities:
Good
Sightings Report

2 nights Arrived 13 May 2018
"As a first drive using gravel roads Bullsport was about the right distance to travel from Windhoek.

It was nice to dine with fellow travellers and our hosts in the evening. The was no choice of menu but what was served was substantial so if the salad was no to ones liking there was more soup.
There was an honesty system on the bar which was a nice touch, everyone had a numbered notebook that corresponded to the number of their accommodation which they logged their alcohol consumption in so the bill could be prepared on leaving day.

There were a number of walks/trails accessible from the farm and a file contained copies of the routes and details of how long and strenuous they were, which could be taken out on each walk. Wildlife was not abundant and as it is classed as bushmeat so any wildlife spots were rare and brief.

On returning to the farm we were inevitably greeted by one or more of the four jack russell dogs which made you feel like part of the family. The pool despite being cool was welcome in the heat" See all these reviews: 15n in Namibia
Experience Report
Overall Rating:
Good
Location:
Good
Service:
Excellent
Rooms:
Good
Food:
Good
Facilities:
Good
Feedback Response
We are delighted that these travellers enjoyed their stay at Bullsport and that they were able to feel like one of the family - the ability to get to know your hosts has long been one of the draws here.

However, to put the low wildlife densities in context - the Naukluft Mountains have been gripped by drought for the last 5 years. As a result Bullsport has been forced to sell almost all of its livestock to protect what little vegetation is left and give the resident wildlife the best chance of survival but despite this, animal numbers have declined. This said, the landscapes remain stunning, and we’ve always through of the walking and hosting as the main draws here. So it’s best to view any wildlife as a nice bonus.

Kulala Desert Lodge offers comfortable rooms with fantastic views of the Namib and a private gate to the Namib-Naukluft Park - a bonus on guided excursions.

Barkhan Dune Retreat is a welcoming lodge close to the impressive Spreetshoogte Pass, majors on hiking and relaxation.