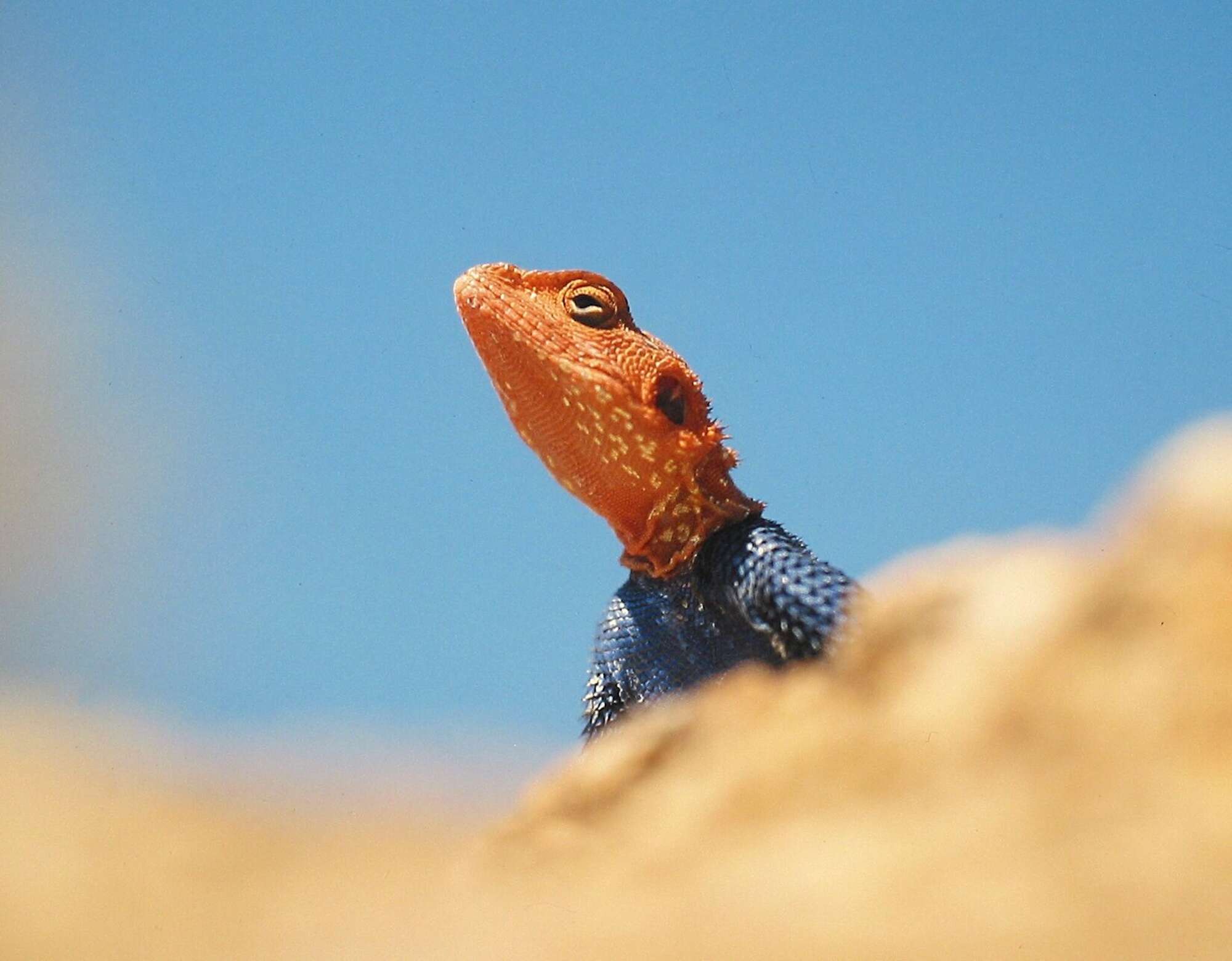 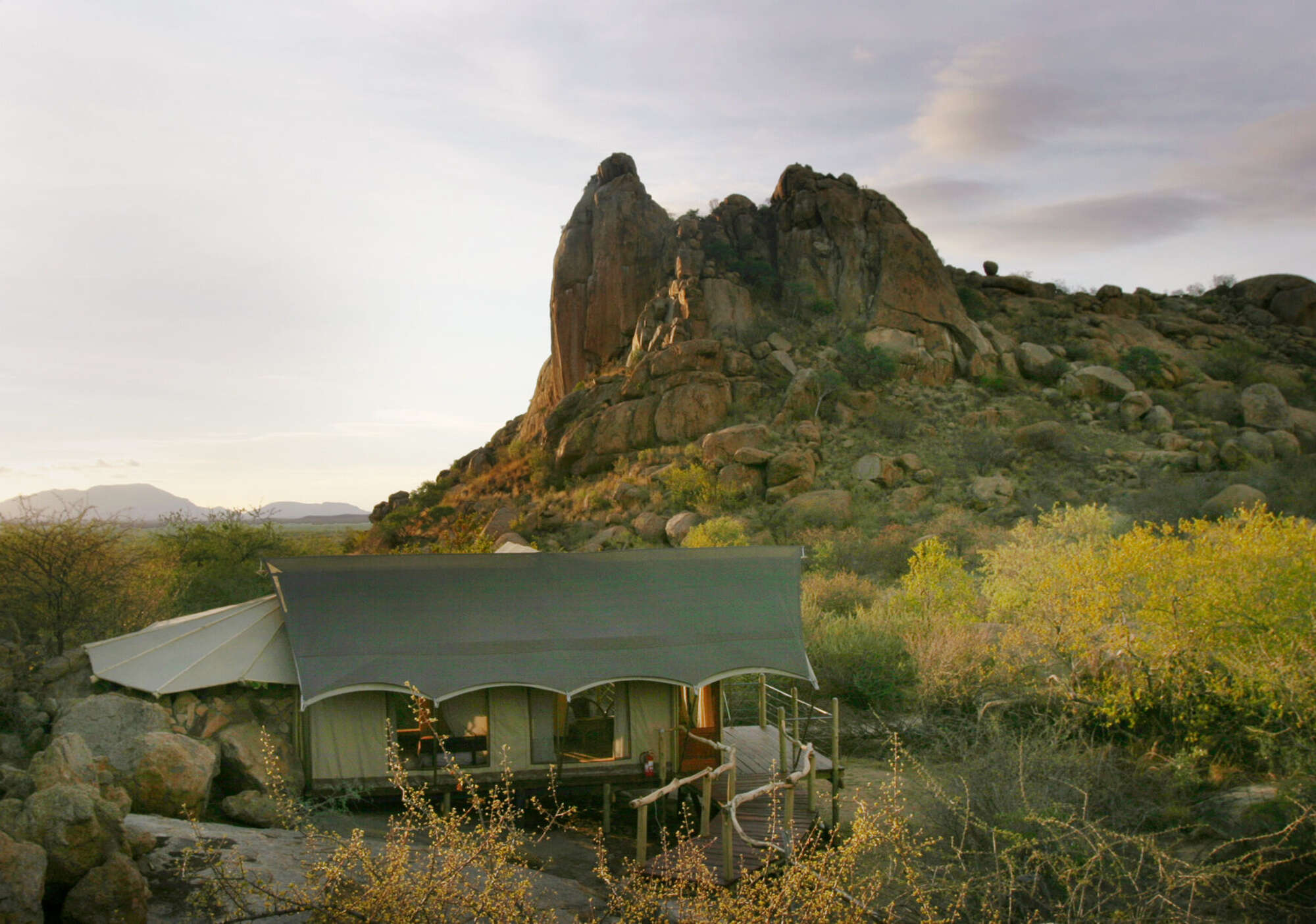 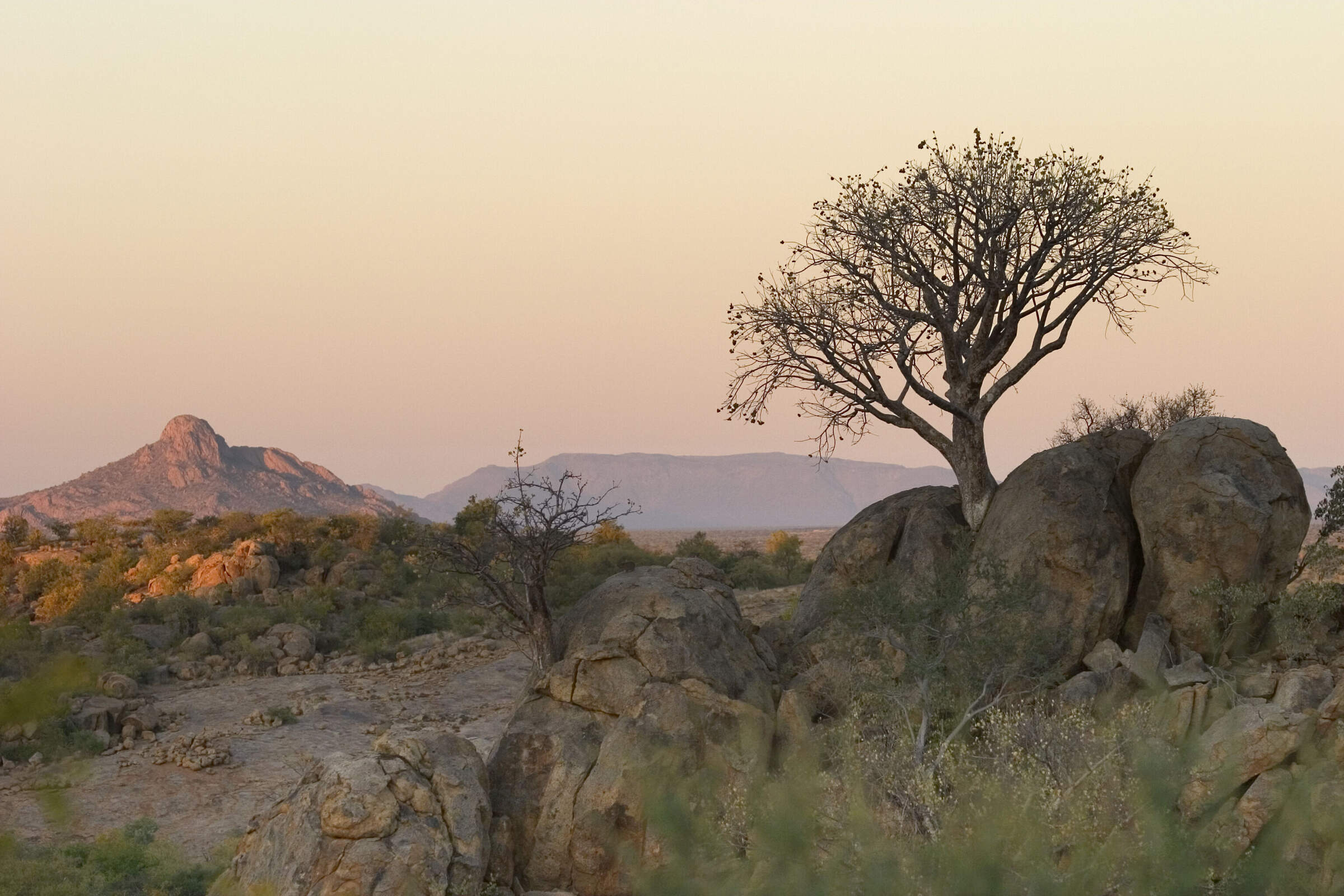 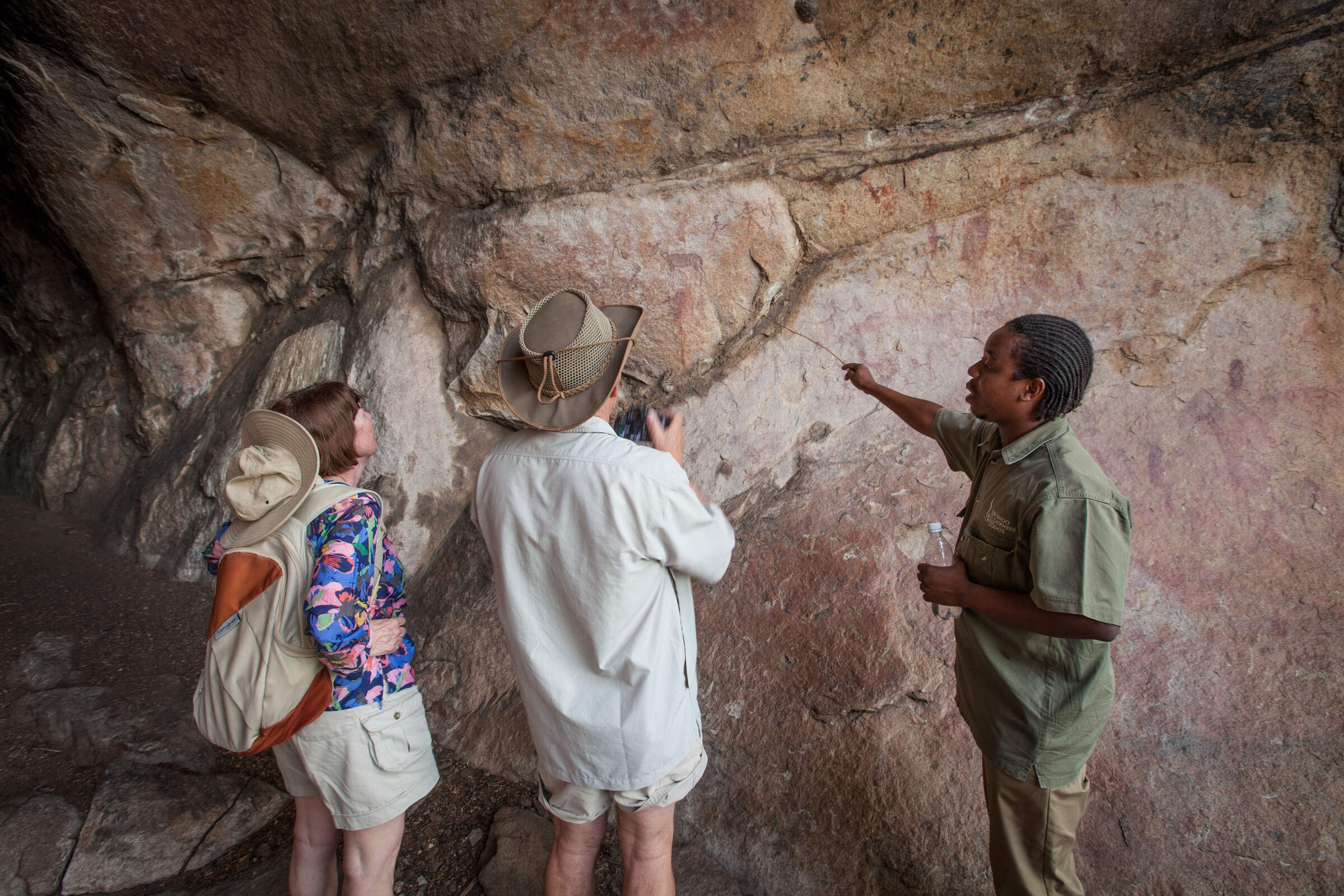 411 independent comments and wildlife information from our travellers who have visited Erongo Wilderness and kindly agreed to share their thoughts. They do not necessarily represent the views of Expert Africa

"Wish we could have stayed longer!"

1 night Arrived 18 Jun 2018
"What a wonderful camouflaged setting amongst the rocks.

Sadly we couldn't stay longer here as our flights were changed. The food was excellent. The staff very friendly and there are some great walks with super views of the surrounding area.

We didn't see much wildlife apart from the rock hyrax (dassie) which live around the camp but we hadn't seen them elsewhere, so another animal to tick off the list.

Couli took us on a sundowner walk which was included with our trip and as before, a fountain of knowledge, having lived in the area for most of his life. " See all these reviews: 14n in Namibia
Experience Report
Overall Rating:
Excellent
Location:
Excellent
Service:
Excellent
Activities:
Good
Rooms:
Excellent
Food:
Excellent
Facilities:
Excellent
Mr W & Miss P
UK

Readily available walks from the camp with a variety of lengths and graded for difficulty. Staff great. Food great.

Our accommodation was furthest away from the restaurant however had an out door bed, shower, dining area, deck chairs and comfier seating plus indoor bed, bathroom and seating. You appreciated the care that had been taken designing the camp when looking down on it from the rocks on the trails.

The rocks round the restaurant housed dassies and one evening we noticed them all looking down the rock face to a massive rock python that was squeezing itself into the rockface searching for food.

2 nights Arrived 26 Apr 2018
"Rocky steep entrance road, left the Duster at the bottom.
Dispersed chalets across a large site, we are in the furthest away, 200-yard walk upwards in the heat.
Accommodation was fine, bed a bit small and no A/C
Nice external dining terrace with good views, but an arduous climb up to it.
Nice suppers in the balmy evening
Good excursions, Herman a good guide, the morning walk before breakfast was superb, watching the sun rise and illuminating the surrounding hills and mountains in a beautiful low-level light.
A hard climb for our sundowner walk, steep and rocky, but rewarded with fantastic views and good sunset over the Brandberg Mountains." See all these reviews: 18n in Namibia
Experience Report
Overall Rating:
Good
Mr I P
Uk

The rooms are really well appointed and have incredible views. The bathrooms are cleverly designed and allow you to shower al fresco in privacy.

The bar and dining area are excellent with superb views. The food was really good and we thoroughly enjoyed the sundowner evening walk.

The self guided trails are well marked and the views from the top of the baboon trail are breathtaking! For animal lovers, there are hundreds of dassies scurrying about." See all these reviews: 13n in Namibia
Experience Report
Overall Rating:
Excellent
Location:
Excellent
Service:
Excellent
Rooms:
Excellent
Food:
Excellent
Ms L
Queensland

3 nights Arrived 2 Apr 2018
"This lodge is located nicely amongst spectacular granite boulders. I requested a room with best views and was given one. However it seems to be poorly managed. They never bothered to obtain a couple of items put through to them more than once before my arrival. They only started ringing the store at Omaruru after I arrived and spoke to them. That store being in a small town had virtually nothing I needed except low fat milk. The owner who happened to be around for a few days had to go to pick it for me, with some of the other food being brought back by the manager from Windhoek (where his wife had to go for an appointment) after half of my stay was over.

I was told by Expert Africa that all the Namibian lodges confirmed they will supply what I requested, but it hasn't turned out to be the case.

Upon arrival I booked the sundowner tour, and was told to go to reception at 6.30pm. I went to reception at 6pm, confirmed it again, saw the guide walk past, and found out at 6.30pm they had left without me as the time had been changed to 6pm without the receptionist knowing, and the receptionist had never told the guide of my booking. So at 6.30pm, the owner had to take me up to join the group himself. I was very put out.

This lodge appeared to have little organization. Reception has no fixed open hours. Light bulbs leading up the steps to the restaurant were blown. If one didn't have a torch one had to go up stairs in the dark. I suspected they only got replaced as the owner was here and noticed it.

This lodge had a reputation for bird watching. But due to the severe drought 2 years ago, most species have left, and I only saw several rather common species around.

My recommendation is to spend about a day here, just to do some of the walking trails. Otherwise there's not much else to do.
" See all these reviews: 15n in Namibia; 4n in Zimbabwe; 1n in South Africa
Experience Report
Overall Rating:
Good
Location:
Excellent
Service:
Average
Activities:
Good
Rooms:
Good
Food:
Average
Facilities:
Terrible
Mr M
Midlothian

2 nights Arrived 23 Feb 2018
"I don't think there is any way to prepare you for just how special Erongo Wilderness Lodge is. The scenery is simply stunning and unlike anything else I've seen. You will find yourself perched on a hill of enormous boulders and mountains formed by long-ago volcanic activity. The luxury tents are not just tents but have extensive outdoor space for you to enjoy. Ours had an outdoor shower, outdoor lounge-bed, small dining table, and another set of comfortable lounge chairs on a deck. I could happily live in that tent! The views are unbeatable.

The manager was incredibly welcoming and funny and made us feel right at home. We loved his unexpected bush-dog, Alaska the Pomeranian, and really enjoyed having a pet around the property! The pool area is small but cute and the pool was very refreshing. The food was wonderful–probably the best we had in Namibia. My husband raved about the game meat and how it was cooked and they catered well to my vegetarian needs.

We went on a guided sundowner hike in the evening to enjoy a stunning sunset view and also a morning hike to the top of one of the mountains. Both guides were very kind and knowledgable. We also did the nature drive to see the beautiful rock art in a cave and enjoyed all of these activities very much. We did not see much wildlife apart from rock dassies and baboons but did enjoy the lovebirds that visit the feeder by the restaurant in the morning, and the abundance of stunning scenery on the property will make any photographer very happy!

I was very sad to leave this lodge as it was such a special place to stay. I don't think there is anywhere like it in the world and I very much hope to return again." See all these reviews: 9n in Namibia
Experience Report
Overall Rating:
Excellent
Location:
Excellent
Service:
Excellent
Activities:
Excellent
Rooms:
Excellent
Food:
Excellent
Facilities:
Excellent
The Rolling Crones
UK

2 nights Arrived 29 Jan 2018
"Another good lodge, with friendly staff. Excellent guide on a couple of walks and to see the rock paintings. Loved the location set into the rocks. The girls in our party didn't like the crocodile in the pool. The movement of the water gave the impression of it moving. Otherwise loved it." See all these reviews: 17n in Namibia
Experience Report
Overall Rating:
Excellent
Location:
Excellent
Service:
Excellent
Activities:
Excellent
Rooms:
Excellent
Food:
Excellent
Facilities:
Excellent
The G's
London

2 nights Arrived 3 Dec 2017
"We were given room 10 which had spectacular views from a lovely terrace.

The pool area sadly did not have a view and where the sunbeds were it was rather dark.

1 night Arrived 2 Dec 2017
"We stayed for only one night at Erongo making it our last stop en route back to Windhoek.

The lodge seems to be under new management and is, if anything, even better now than we remember it from our previous visit in 2010 .

The lodge is in a spectacular location amongst massive granite boulders and really deserves a longer stay.

The rooms are spacious and comfortable, everyone is very friendly and the food is excellent." See all these reviews: 13n in Namibia; 8n in Zimbabwe; 1n in Botswana
Experience Report
Overall Rating:
Excellent
Location:
Excellent
Service:
Excellent
Rooms:
Excellent
Food:
Excellent
Showing 41-50 of 411
1...456...42
Previous Next
96%
411 reviews of Erongo Wilderness by travellers since August 2007
Overall rating by our travellers
340
65
6
0
0
Filter by month

Other lodges in Central Highlands

The rustic Mundulea Bushcamp offers superb and varied walking in the company of a top-class guide on a reserve that features many endangered or endemic species.

For a chance to spot some rare game species, Frans Indongo Lodge is an ideal stop over between Windhoek and the Etosha National Park.

A stylish and peaceful lodge, The Elegant Farmstead is a relaxing and comfortable place to break the journey between Windhoek and Etosha.

Ghaub Guestfarm is a charming guestfarm on the site of an old mission station, in an unusually verdant patch of Namibia.

For an economic, rustic option Roy's Restcamp makes for a convenient overnight stop when travelling to Bushmanland or the Caprivi Strip.

Cheetah View Lodge offers guests the chance to see cheetahs at close range and to learn about the work of the Cheetah Conservation Fund.

Ai Aiba is a simple and relatively large lodge with plenty of great walking, mountain biking trials and some spectacular San rock art.

Hohenstein Lodge is situated south of the Erongo Mountain Range. Each of its ten chalets has been built to make the most of the panoramic views.