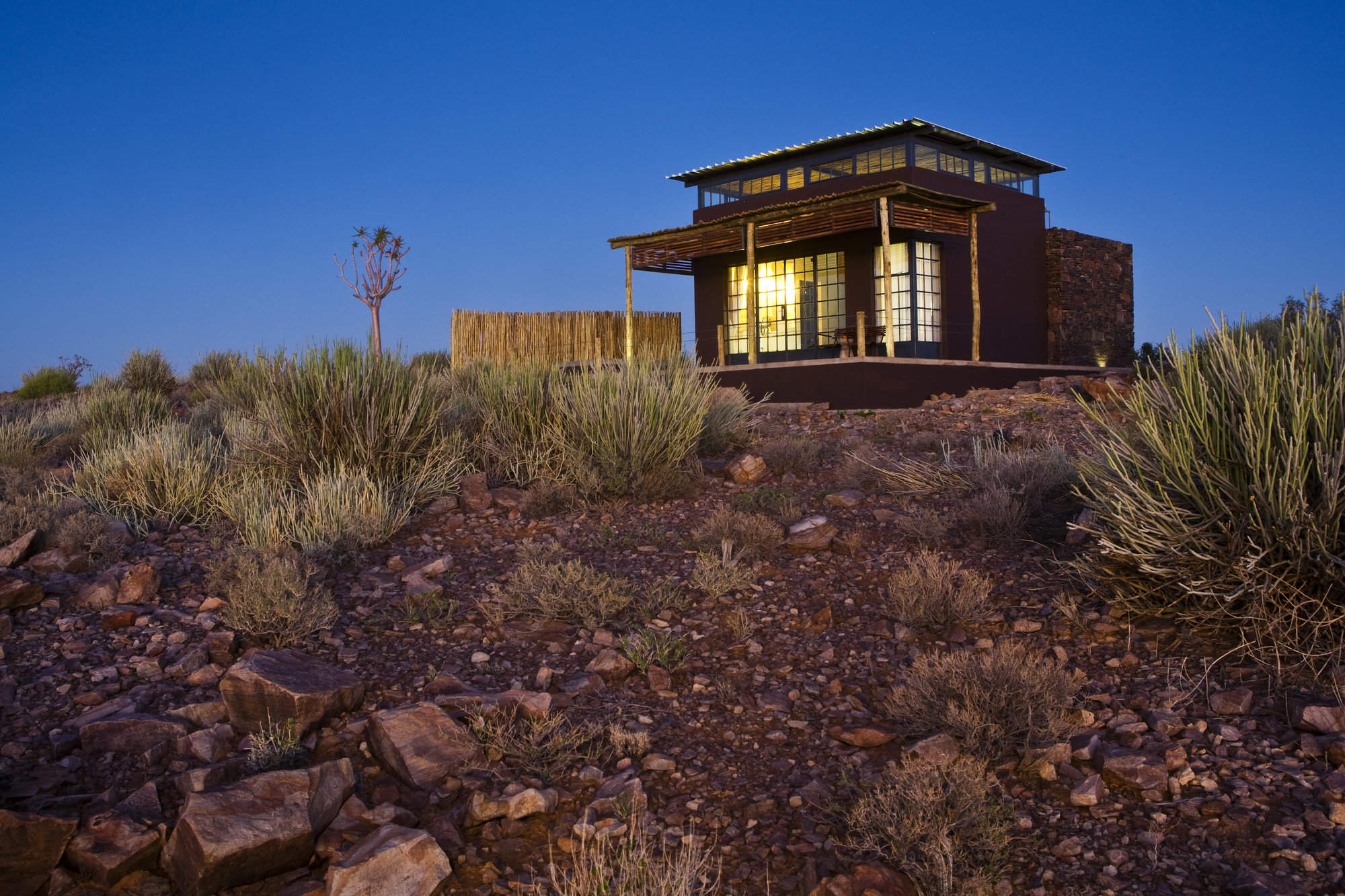 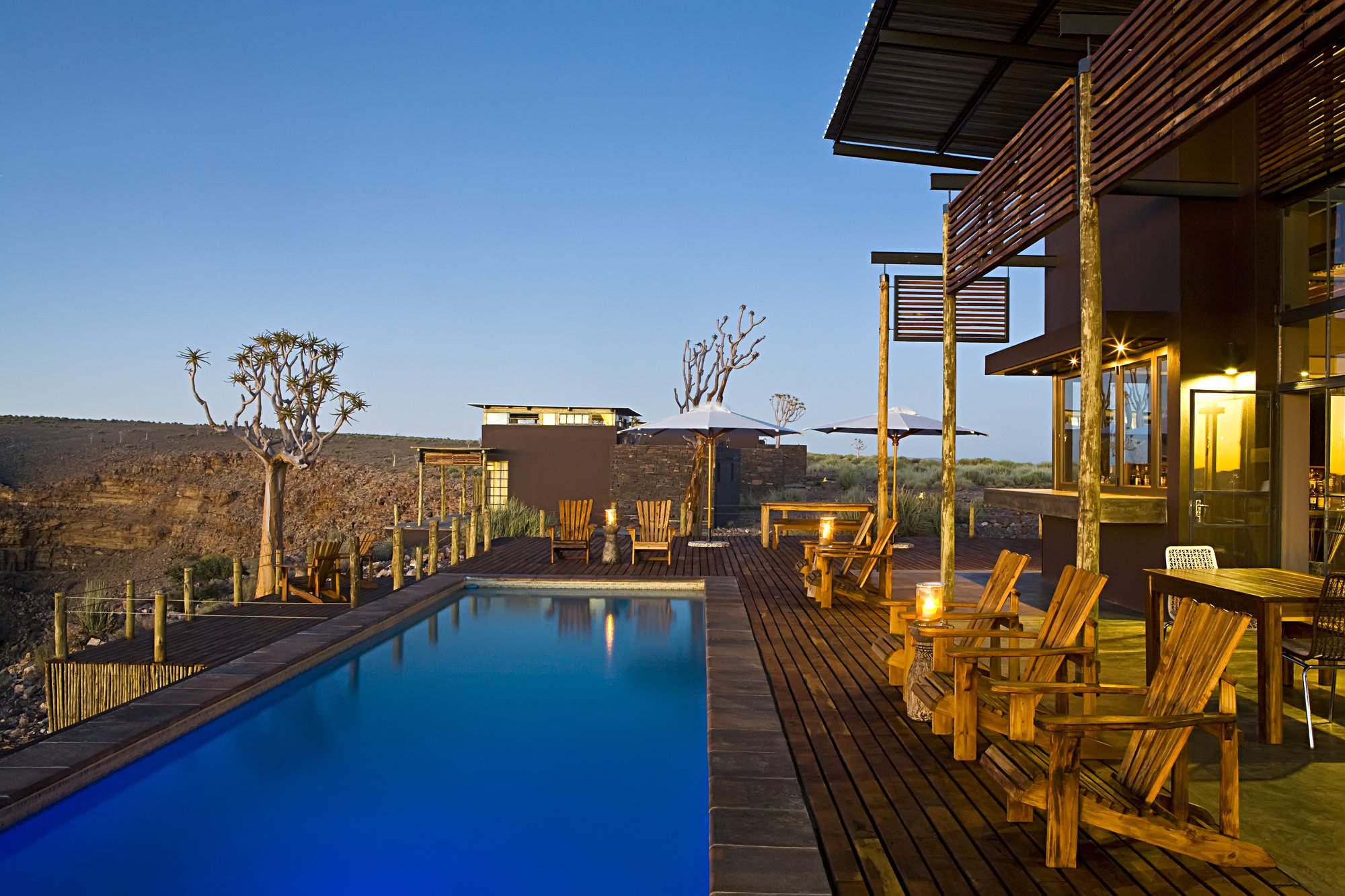 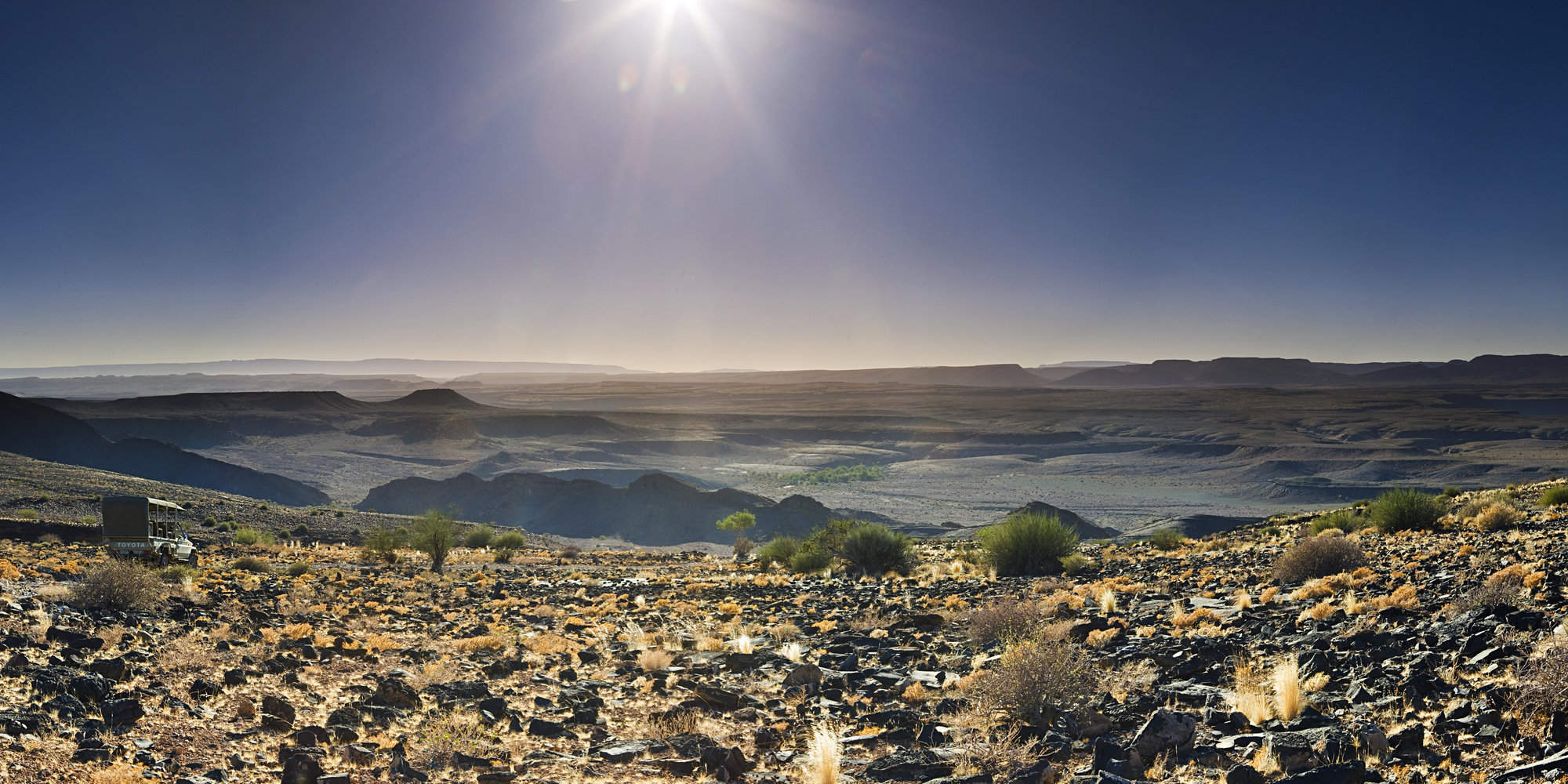 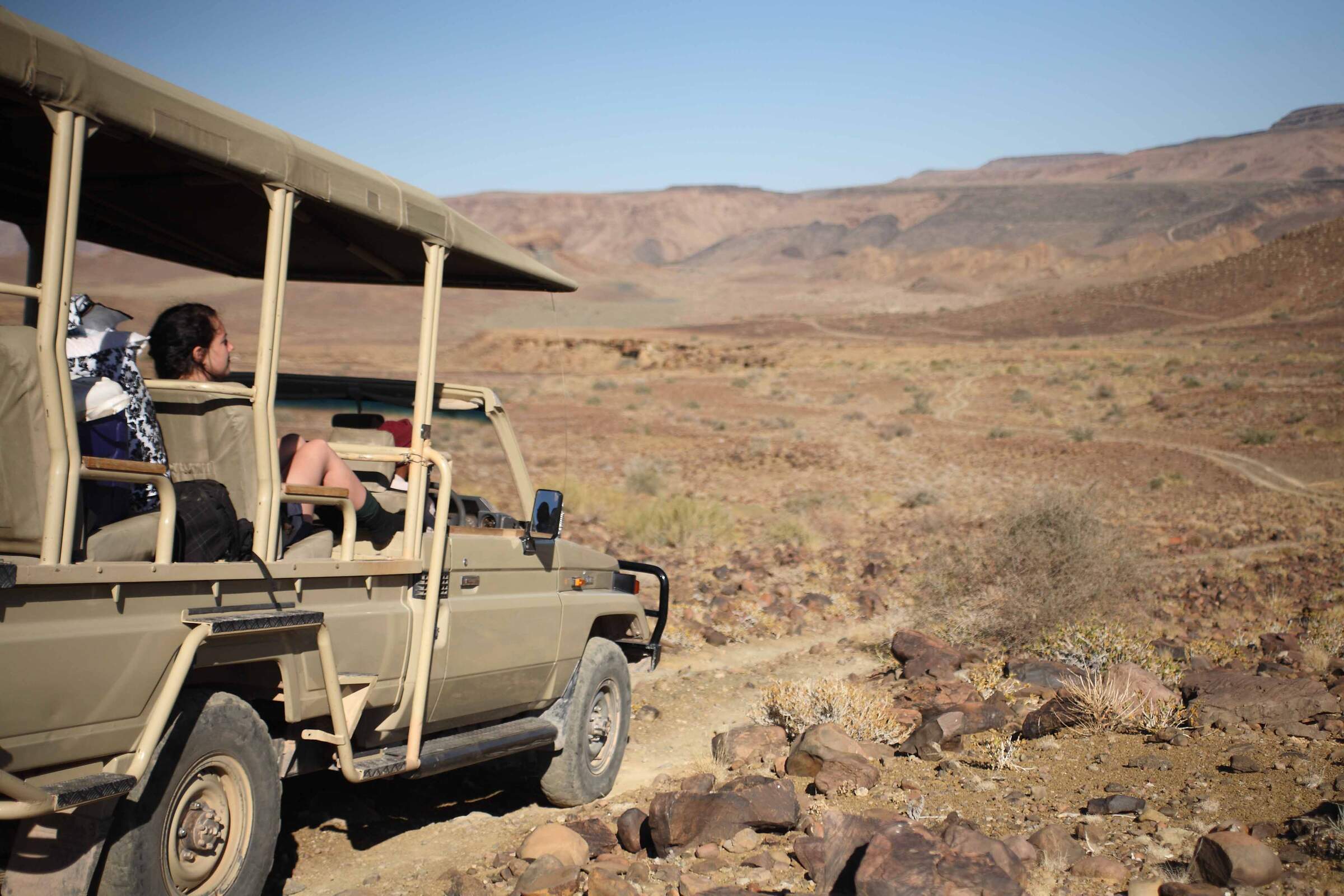 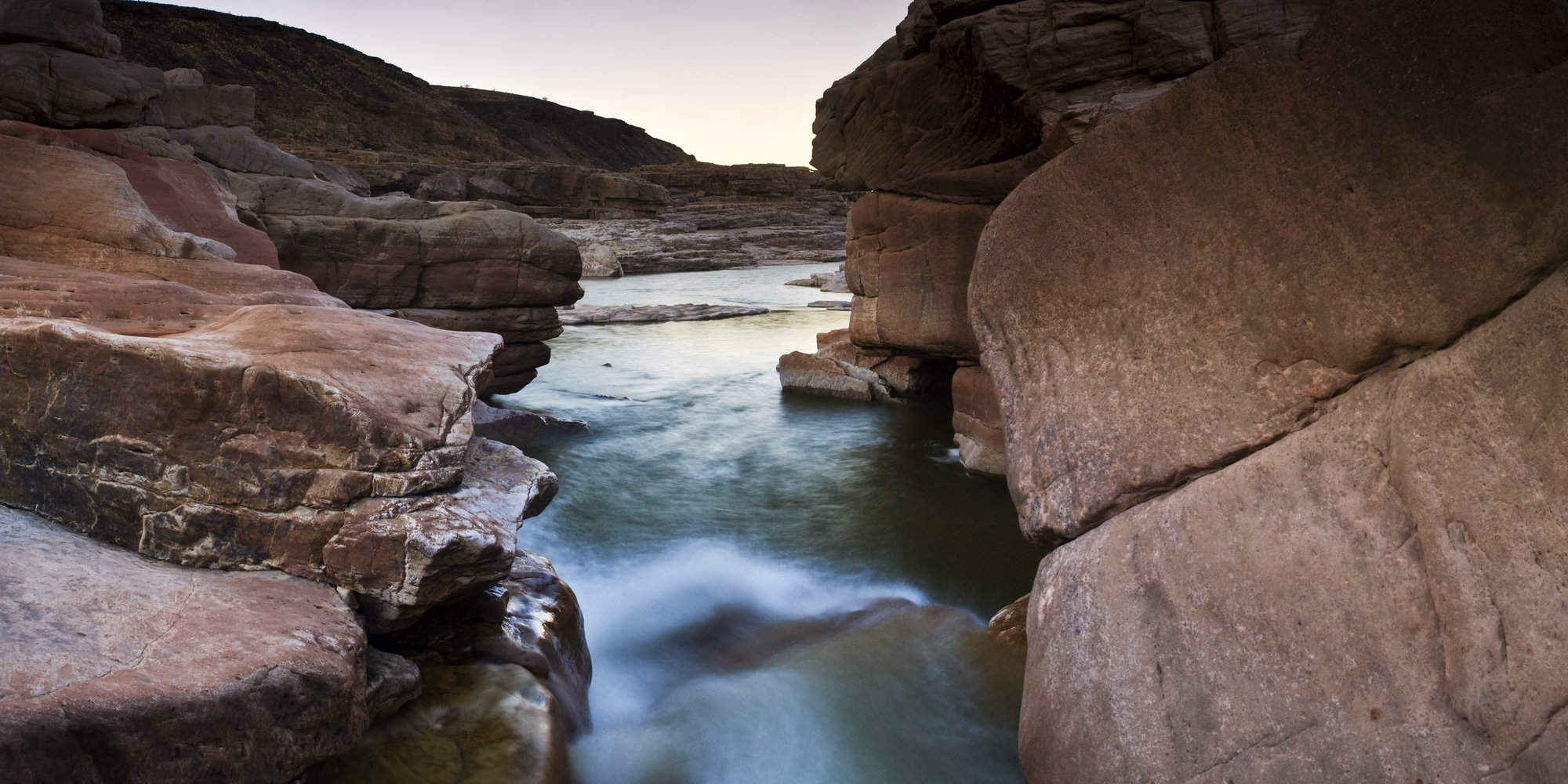 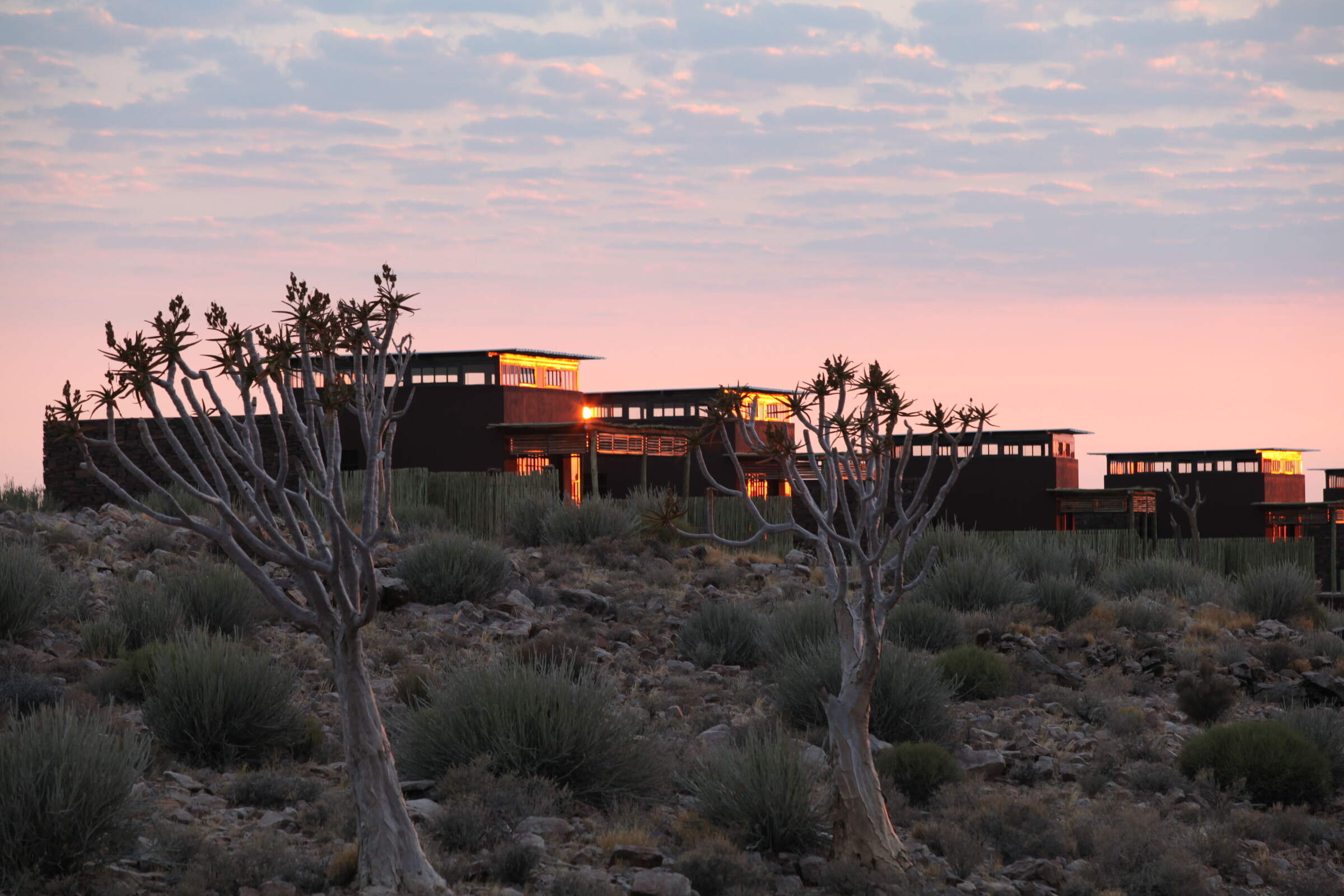 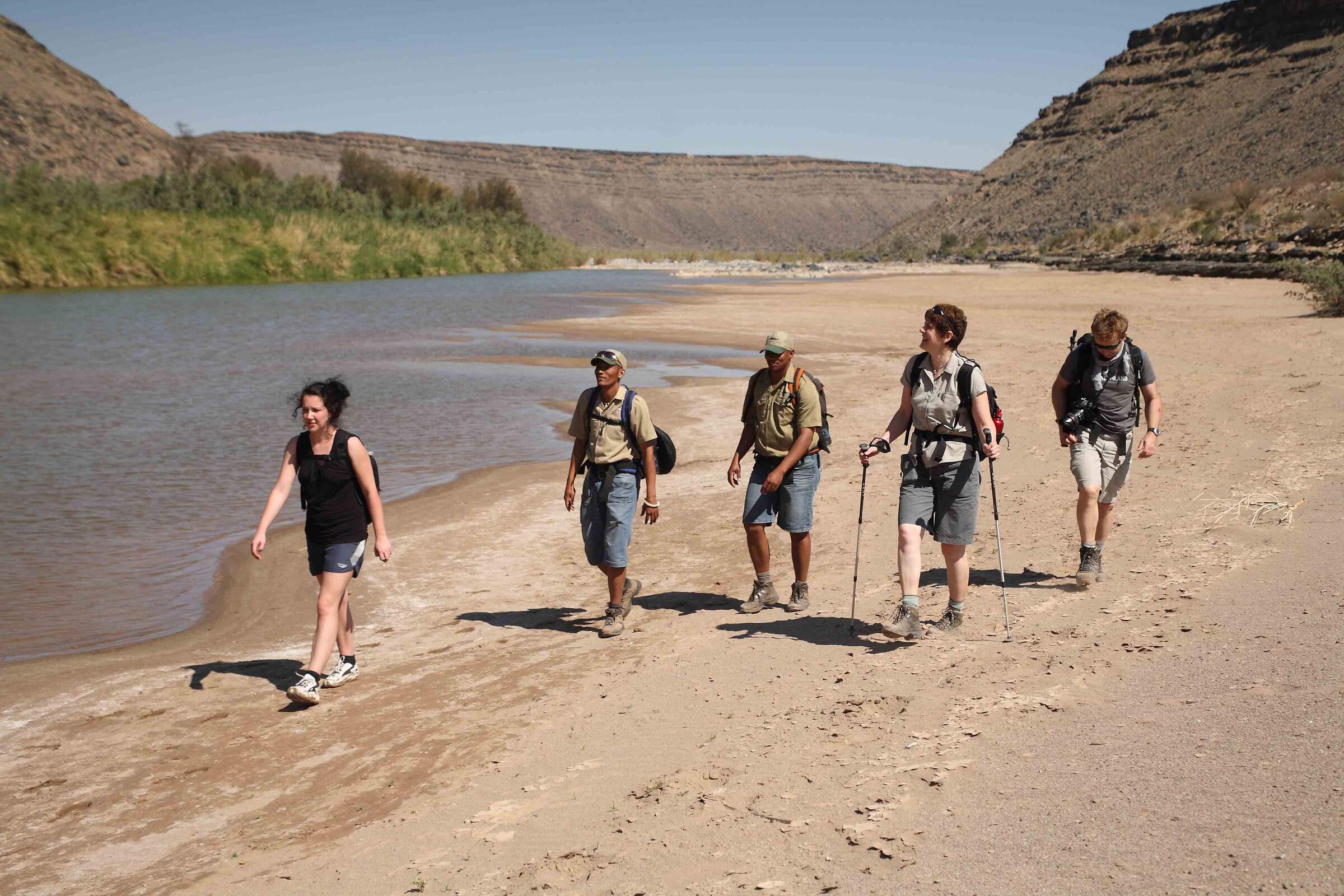 58 independent comments and wildlife information from our travellers who have visited Fish River Lodge and kindly agreed to share their thoughts. They do not necessarily represent the views of Expert Africa

5 nights Arrived 29 May 2014
"We stayed at the lodge on the first and last nights, with three nights camping in the upper parts of the canyon.

First the lodge - getting there up the 20km track was interesting in parts; we wondered whether the two wheel drive would be OK, but it was actually fine. The location of the lodge is superb, on the edge of the canyon, and the rooms are very nice. There was one minor issue with the rooms - it was very windy when we were there, and the noise of that wind over and round the lodges rooms was such that residents were offered ear plugs! It is clearly a consequence of the architecture, but it didn't in any way spoil our enjoyment.

The staff were friendly and helpful without exception, and they had a surprise for us on our first evening - a birthday/anniversary cake presented by all the staff, accompanied by singing and dancing. Brilliant, and the staff all clearly enjoyed presenting it.

The four day hike up the upper reaches of the Fish River Canyon was excellent. The walking was easy, i.e. not particularly strenuous and OK for anyone with moderate fitness. Our Guide, Desi was great fun, knowledgeable and good company. Likewise the camp crew. With Desi we learnt a lot about animal tracks, droppings, animals, plants and the geology of the area. It was just the two of us and Desi on the walk, the camps being prepared and moved by the camp crew and their pick-up truck. Camp? We were in a tent, which had camp beds, sheets, duvets and a side table. Nearby was a bush shower, and the camp crew had plenty of hot water ready f or us when we arrived at in the late afternoon. And we had a chemical toilet too. Dinner was at a table with cloth, napkins and lamplight, and comprised a full three course meal almost to the standard of the main lodge restaurant! And all with the Milky Way in all its brilliance overhead. Breakfast was also of a similar standard. On a practical note, it was heading towards mid-winter and the nights were cold, so we certainly used our thermal underwear as pyjamas. But the days were glorious, almost too hot at times. Walking, we didn't expect to get near any animals, but we did see a good range of antelope and zebra, and Desi spotted a horned Adder, which was a treat to see.

The whole walk was great, but it was in the upper reaches of the canyon, and not to be confused with the five day walk down into the deeper part of the canyon to Ai Ais. Our original intention was to do the latter, and it was only when we actually got to the lodge that we realised we were to be going up river and not down - perhaps we had not paid attention to Sabina, because we had been wondering how the camp and catering would work when we knew access is more or less non existent on the walk to Ai Ais. Although we were a little disappointed that we did not go down-river into the deeper canyon, we really enjoyed the walk we did. The important thing is to make clear to customers that this walk is not the one down the canyon, but that it has other attributes: bags are carried; meals are provided, the scenery is different and (probably) more varied; there may be a wider range of wildlife. (This is not a complaint, by the way - we would recommend the walk to anyone - it just needs to be clear what walk it is)." See all these reviews: 26n in Namibia
Experience Report
Overall Rating:
Excellent
Location:
Excellent
Service:
Excellent
Activities:
Excellent
Rooms:
Excellent
Food:
Excellent
Facilities:
Excellent
Mr D.T.R
Corby

"Perched on the edge"

2 nights Arrived 23 Jan 2014
"There can be few places in the world which are so remote yet which have such a stunning view - Fish River Lodge is perched literally on the edge of the spectacular canyon of the same name. The rooms consist of individual chalets which are spacious and well appointed but which lack the charm of some of the tented and thatched camps.

The food and the service was good. We enjoyed a sundowner at one of the best viewing points and this was truly excellent and well organised by a very capable guide John.

"A long drive but to and outstanding lodge"

2 nights Arrived 11 Jul 2013
"Not sure the long drive to the canyon would be justified for everyone, and in a way the lodge itself is a better feature than the canyon, especially if you've been to places like the Grand Canyon or Verdon Gorge etc." See all these reviews: 17n in Namibia
Experience Report
Overall Rating:
Excellent
Location:
Excellent
Service:
Excellent
Activities:
Good
Rooms:
Excellent
Food:
Excellent
Mr & Mrs W
Berkshire

I think if I was going to Fish River with what I know now, I would go to the other side of the canyon and drive in to the National Park" See all these reviews: 16n in Namibia; 2n in Botswana; 1n in Zambia
Experience Report
Overall Rating:
Good
Location:
Excellent
Service:
Poor
Activities:
Average
Rooms:
Good
Food:
Poor
Facilities:
Average
Miss T & Mr H
UK

"worth the drive to see the view"

2 nights Arrived 11 Dec 2012
"A stunning location, a very knowledgable and entertaining guide who managed to still be fresh and enthusiastic on the canyon drive even though he had been doing it every day for 3 months.

The only negative comment is the bed - it really creaked so you would wake yourself up every time you moved.

The food was good but could do with a few tweaks. Not good to put yoghurts in lunch packs that are not going to be eaten until midday in temperatures 0f 30 to 40 degrees. Just means they are all thrown away." See all these reviews: 11n in Namibia
Experience Report
Overall Rating:
Good
Location:
Excellent
Service:
Excellent
Activities:
Good
Rooms:
Good
Food:
Good
Facilities:
Good
Mr & Mrs E
Gloucs

2 nights Arrived 10 Nov 2012
"It was worth the long drive. Perched on the ridge of the canyon with breathtaking views, the lodge matches the environment perfectly. We were so pleased to be staying two nights as we were rather tired by this stage. It was wonderful to have a view of the canyon from our own chalet. The staff were very helpful - a rather unique place." See all these reviews: 22n in Namibia
Experience Report
Overall Rating:
Excellent
Location:
Excellent
Service:
Excellent
Rooms:
Excellent
Food:
Excellent
Facilities:
Good
Mr & Mrs T
Glasgow

"great place to see the canyon"

2 nights Arrived 11 Sep 2012
"Enjoyed our stay and freedom to explore canyon rim on our own. Guided excursions are extra Access road difficult without 4x4

Rooms are fairly stark but clean and well kept and in cool weather have no additional heating. The whole set up is more suited to hot weather.The wind at night is well known and the ear-plugs (provided) are necessary at times.

There appears to be a lack or consistent and visible management. We were not offered a welcome refreshment when others arriving that afternoon clearly were.Individual members of staff were outstanding...Charlie deserves a mention.

The wine list was poor many items missing...no Angusura bitters!