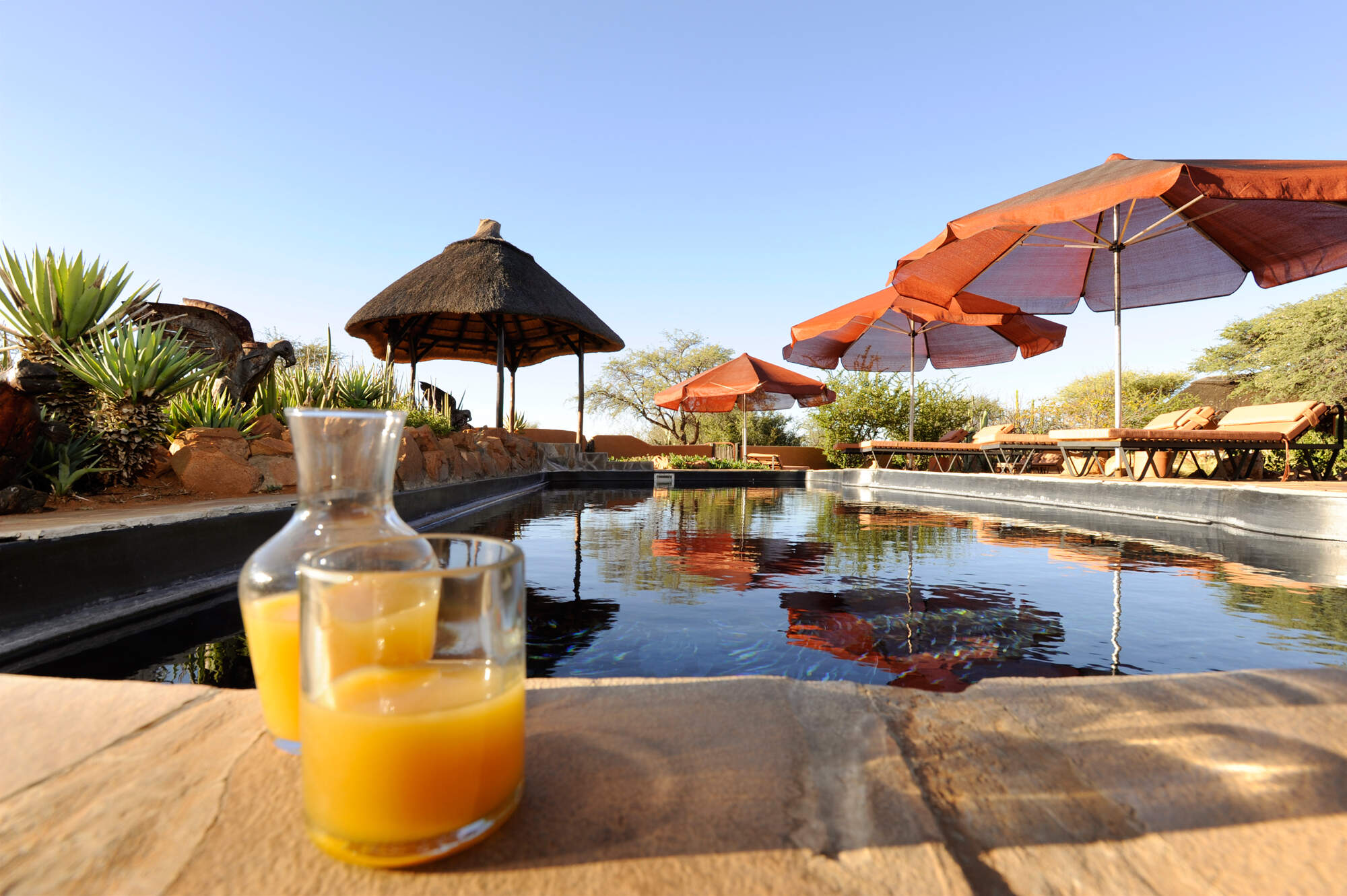 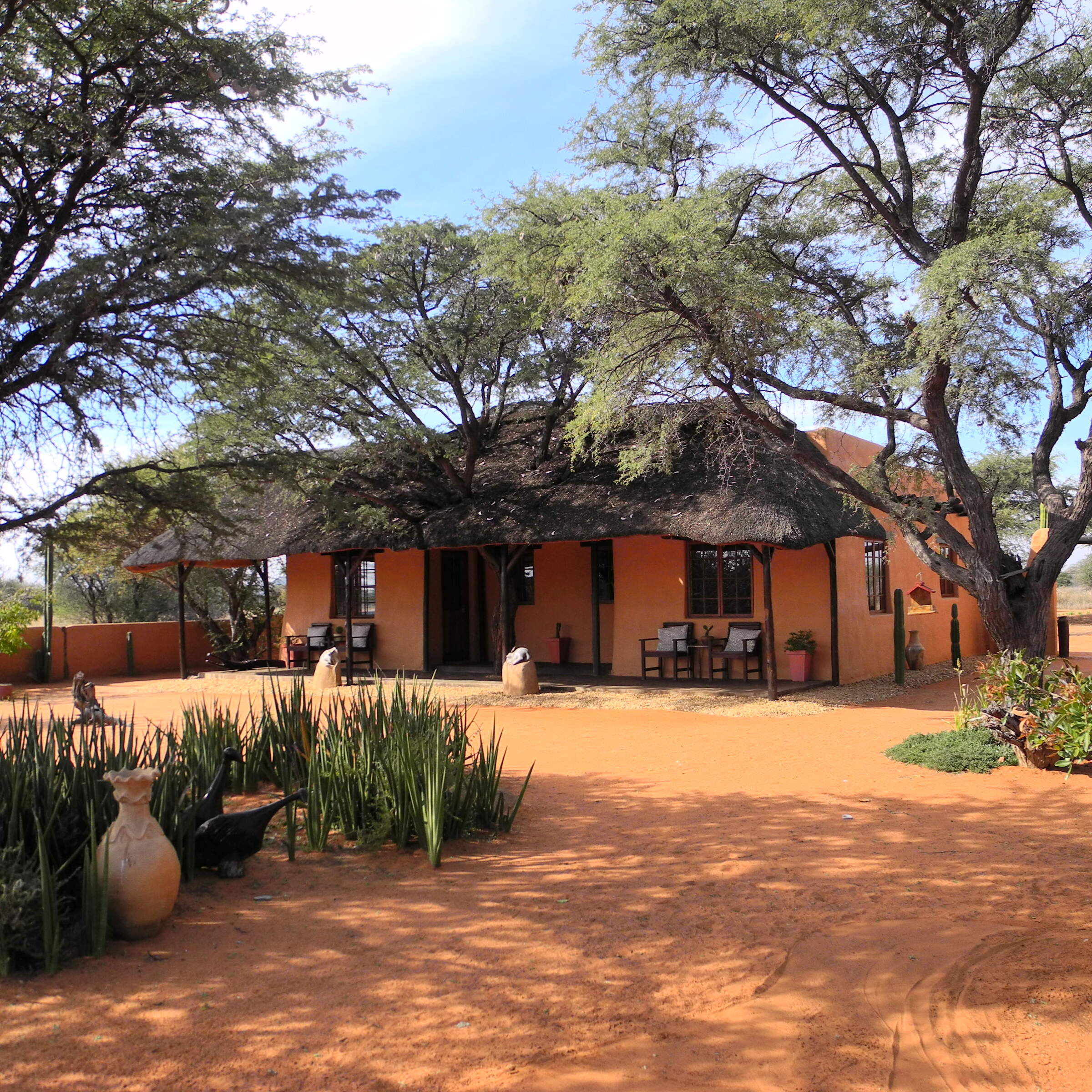 62 independent comments and wildlife information from our travellers who have visited Eningu Clayhouse and kindly agreed to share their thoughts. They do not necessarily represent the views of Expert Africa

1 night Arrived 21 Oct 2010
"This was the worst day of our holiday. We had not been warned about exactly how long the drive would take, and the directions were appalling. As mentioned before it took 20 mins to get out of Mundalea (road particularly bad in places) so having left at 9am we were on the main road by 9.30am. We stopped to refuel and stopped at Okanja for lunch at the Garden centre for lunch which does not appear to exist. We continued into the town and ate at Rhinos which was fine.

Then contined to the craft stalls (as mentioned in the guide book). We then continued to Windhoek and to Eningu. Not only were we sent on a long roundabout route but the lodge was incorretly marked on the map. We got very lost trying to find it and finally arrived at 6.15pm. We had expected to arrive around 3pm, and have a relaxing afternoon there before starting our return journey home.

Bettina (the owner) said she had told Expert Africa about people being sent the wrong route before (and she has only been the owner for 6 months). We should have driven almost to the airport adn down road M51. From there we would have seen signs. It was literally only an hour to the airport on a good road - why on earth were we sent via Dordabis - and according to your map back that way the next day to the airport? It meant we did over 50 km extra and started to run low on petrol.

She allowed us kindly to use her internet to check in for our flights that evening but was clearly not used to doing this for guests. We therefore appreciated this but feel that any hotel being used for the last night should be made aware that guests will need to do this.

A small suggestion for the bathrooms would be plastic shower mats - the floor was on a slope for better drainage but after being in Mundalea I wanted to clean my feet properly and almost slipped over. I forgot to mention this whilst there.

Bettina was lovely and Eningu a great place to stay but only when you have time to appreciate it. Again it would be helpful to know that it takes about 15 mins to get out of the park in a 2WD car." See all these reviews: 16n in Namibia
Experience Report
Overall Rating:
Good
Location:
Good
Service:
Good
Facilities:
Good
Rooms:
Good
Food:
Good
Feedback Response
We’re really sorry about yet another navigation issue finding this lodge – especially as such issues seem to have dogged this whole trip.

These travellers found the map to Eningu confusing. As a result of their helpful feedback, both we and Eningu Clayhouse Lodge itself have made changes to the map that we’ve both been using for years – in order to avoid any possible confusion in future. We will now issue our visitors with a more precise map for Eningu, and more intricate directions of how to reach it.
Mrs & Mr G
Toronto

1 night Arrived 9 Aug 2010
"We arrived here when it was nearly dark so we didn't have time to take full advantage of the opportunities on offer here. However, my sons thoroughly enjoyed looking up at the milky way while relaxing in the jacuzzi and I went for a lovely walk on my own first thing in the morning.

1 night Arrived 31 Jan 2010
"This treat for the eye is a superbly comfortable nature retreat in the middle of nowhere. The sounds you hear will be made by hundreds of birds or maybe the shush-shush of a preoccupied porcupine meandering through the yard or maybe you'll hear the new owner extolling her mastery of contracts and her shrewdness in protecting herself against liability for possible acts of negligence by the previous owner(s), etc., etc.

Eningu Clayhouse is in transition between owners. During breakfast on our one morning there, the only guest (me) couldn't hear the aforementioned birds or the rodent due to a business discussion carried on by the new owner at the next table; so, we left.

With the likely addition of television from Europe and an Internet café we sense that this property may become a Kalahari roadhouse for high rollers and we cannot recommend it to anyone at this time
" See all these reviews: 9n in Namibia
Experience Report
Overall Rating:
Terrible
Feedback Response
Eningu responded very promptly saying that although they were obviously disappointed by the travellers comments, they do appreciate any form of feedback, as this helps them to identify issues of concern. They have acknowledged that during this transition period there may be signs of teething problems however they hope that these will be overcome very quickly.

Eningu have also assured us that although they will be offering their guests internet access for flight reconfirmation and a television for the viewing of the Football World Cup, they plan very few other changes at the lodge.

2 nights Arrived 28 Sep 2009
"Could not fault Eningu for a relaxing very good quality lodge at the end of our holiday, just an hour from the airport.

Food was some of the best we had all holiday, including the first class places we had stayed.

"The best start to a Namibian Journey"

2 nights Arrived 19 Sep 2009
"The perfect start to our holiday in Namibia, very friendly staff and relaxed atmosphere, and a great welcome from Kate the host.
The walking trails are very well laid out and there are lots of information points to help to gain more knowledge about the local trees and shrubs and ways of life...excellent!

The food was quite the best that we experienced on the whole journey. We can think of no better place to start and finish one's visit to Namibia, and any future trips will have this as the start and finish point!" See all these reviews: 19n in Namibia
Experience Report
Overall Rating:
Excellent
Location:
Good
Service:
Excellent
Activities:
Good
Rooms:
Excellent
Food:
Excellent
Facilities:
Excellent
Mrs & Mr R
Hampshire

1 night Arrived 9 Sep 2009
"Wonderful personal welcome from Kate the owner and her small son - cold towels to wipe away the dust on arrival and a warm welcome despite the fact that Kate had overlooked our arrival and wasn't expecting us.

The little houses were lovely, the food was good and well presented, the walking trails were well marked, and the porcupine which was fed by the back door after supper was an added bonus.

It was a great place to begin our African adventure." See all these reviews: 17n in Namibia
Experience Report
Overall Rating:
Excellent
Location:
Good
Service:
Excellent
Facilities:
Good
Rooms:
Excellent
Food:
Good
Showing 41-50 of 62
1...4567
Previous Next
90%
62 reviews of Eningu Clayhouse by travellers since August 2007
Overall rating by our travellers
37
21
2
1
1
Filter by month